Vitinha 2021/22: Why Wolverhampton Wanderers will regret not keeping the Portuguese wonderkid – Scout report

Talent residing from Portugal has always been on the radars of clubs across Europe and Wolverhampton Wanderers are notorious for their recruitment policy, finding the best young talent of Portuguese descent or from within the Primeira Liga. This trend began in 2016 while playing in the EFL Championship; Wolves acquired Hélder Costa from Benfica and Ivan Cavaleiro from AS Monaco in Ligue 1. The following season, Rúben Neves was brought to the Midlands club from FC Porto and has now transformed into a household Premier League name.

As Wolves eventually achieved promotion to the topflight of English football, their Portuguese contingent grew strong, as they added Nélson Semedo and Diogo Jota, who now plays his football further north in England for Liverpool. The players mentioned have cemented themselves as regulars for Wolves and are well known around the league. With this being said, one name that has slipped under the radar is Vítor Ferreira, also known as Vitinha.

Vitinha was bought in from FC Porto on loan in 2020 and made 19 appearances and five starts, failing to meet the standards of ex-Wolves and Spurs managers, Nuno Espirito Santo. Because of this, Wolves decided to not activate their 16-million-pound buy option and Vitinha is now back at FC Porto, showcasing all that was promised of him on his loan spell in England, and with the performances, he has been displaying so far this season, Premier League fans will surely know his name, if they failed to recognise him before.

This tactical analysis and scout report will delve into the inner workings of Vitinha besides how his multi-faceted approach makes him a special talent on the European scene.

Vitinha occupied a central midfield role in a double-pivot while on his loan spell at Wolves within a 3-4-3 and now FC Porto in a 4-4-2 formation. When stationed in the middle of the park, Vitinha can make use of all the qualities which he gets, as within midfield position, he is tasked with operating within each third and contribute offensively and defensively. On an international front, Vitinha excelled during Portugal’s run to the U21 European Championship final, playing as an interior (wide midfielder) in a 4-4-2 diamond, where he could operate in the half-spaces and combine and interchange in wide areas.

So far, during Vitinha’s young career, he has mostly been used as a midfield number 8, not that he cannot function elsewhere. Vitinha has many strings to his bow, and this will be discussed throughout. 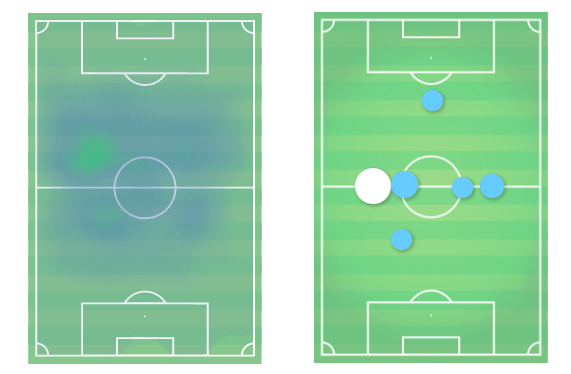 The young midfielder is a creative passer, but it is important to acknowledge that he is not of the mould of a Kevin De Bruyne or Nabil Fekir in that regard. Vitinha is not an outright assister but is a key contributor in attacker as he provides the killer ball into the penalty area or in and around the box for wingers and strikers to finish the move. Vitinha showcases a wonderful understanding of the space in which he can receive the ball. From this platform, Vitinha can show his variation of passing, where he can deliver cross-field switches to free wingers and full-backs on the far-side, which is useful for any team attempting to play against a deep defensive structure.

When quickly playing on one side, and then being able to quickly switch the attack to the opposite flank, the opposition team, suddenly must shift over, and in-result will get stretched and create space for the team in possession to take advantage of. For clarity, Vitinha is not a quarterback per se, the slinging ball left, right and centre. He much prefers to play more intricate and shorter passes but can deliver across longer distances.

While Vitinha’s passing quality is clear when in space, U21 international is equally bright when on the move, as he shines when creating off the dribble. Here, Vitinha solely creates this attacking move, as he starts slightly deeper. From the starting position, Vitinha can bypass Boroarson and attack zone 14 and find a thorough pass Bernardo Paulo. 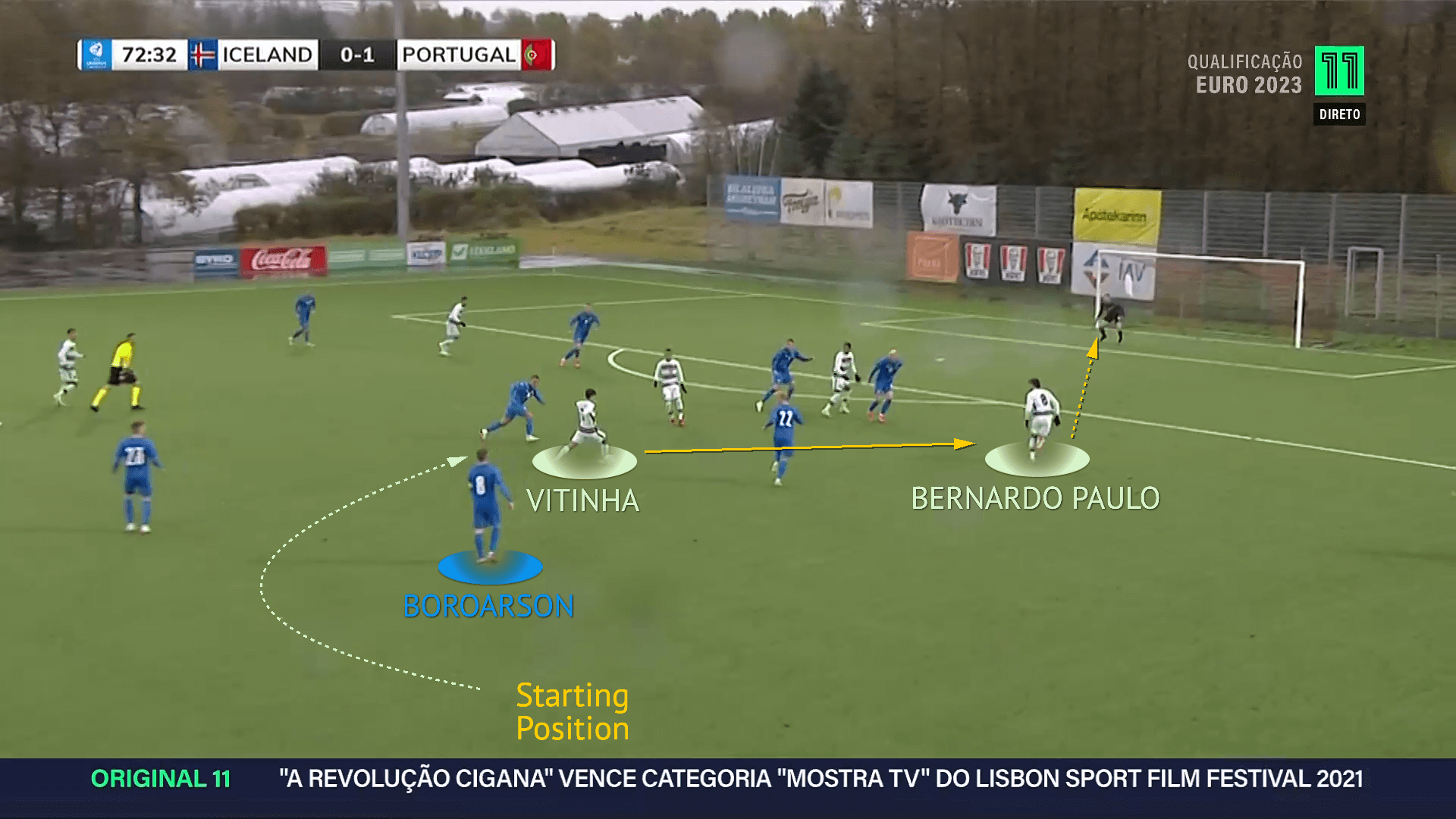 When Vitinha is positioned slightly higher up, his passes are clever; as he pokes the ball through gaps in behind while integrating chip passes and balls around the corner. In saying that, Vitinha’s best work about his attacking occurs when he operates within the half-spaces. From these areas, Vitinha tends to chip the ball over the top and find a runner in behind. Here, Portugal U21 is attacking within the final third, with Vitinha in possession. Within the right half-space, he spots Fábio Silva running in-behind and can first and foremost spot the run initially and second, with the right technique and weight on the ball, find Silva within his stride and create a shot-creating action. 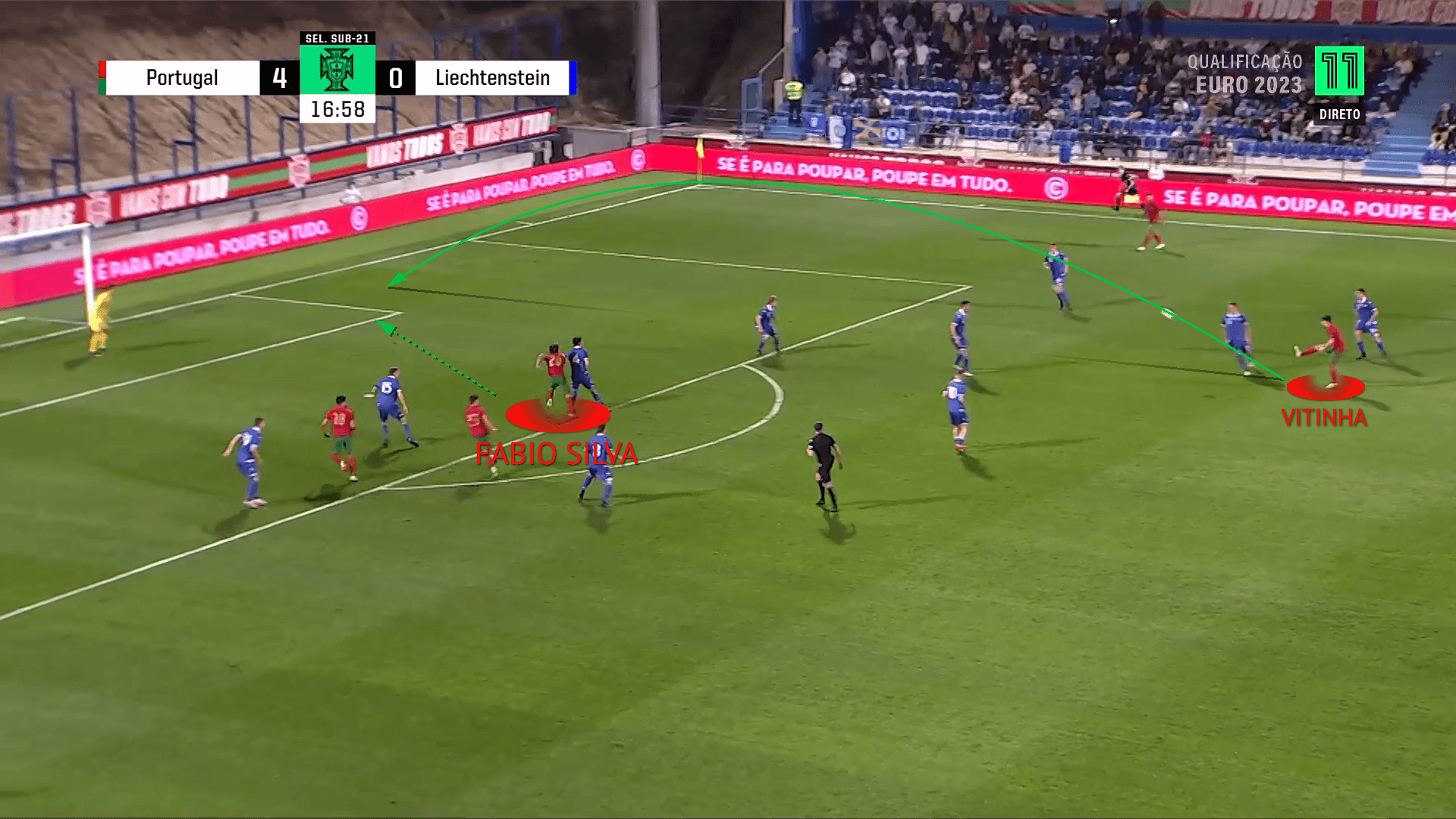 For all of Vitinha’s creative strength, the 22-year-old midfielder still suffers from some shortcomings, which is very normal and expected for a player his age. Vitinha’s passing can be inconsistent regarding him sending passes at long distances that can be overhit and under-hit, as well as him making use of the wrong passing technique, as sometimes, a clean drive pass is most appropriate in certain scenarios but would rather dig the ball out of his feet, which is not always optimal.

In an attacking sense, Vitinha is a major asset to FC Porto, as he can be the creative spark for the Portuguese outfit, from deep positions and further forwards within the half-spaces. While being so clever within the attacking phase, Vitinha also shines during the defensive phase of play and is a massive contributor when his team is out of possession.

As mentioned prior, Vitinha plays in a double-pivot, so shares attacking and defensive responsibility with his midfield partner, and data does suggest he does not shy away from off-ball duties. According to Statsbomb, 3.4 tackles per 90 minutes, accompanied by 2.5 interceptions per 90. The numbers do not lie, Vitinha is contributing defensively and runs vigorously to retrieve the ball, however, Vitinha is still an inexperienced player and must develop in certain areas in this respect.

Defensively, Vitinha has good anticipation skills, as he likes to sneak into opposition passing lanes and gain possession, as well as Knick in and recover possession. A few occasions arose when facing an opposition attacker 1v1; Vitinha would expect his movement too early and get bypassed because he missed the initial. 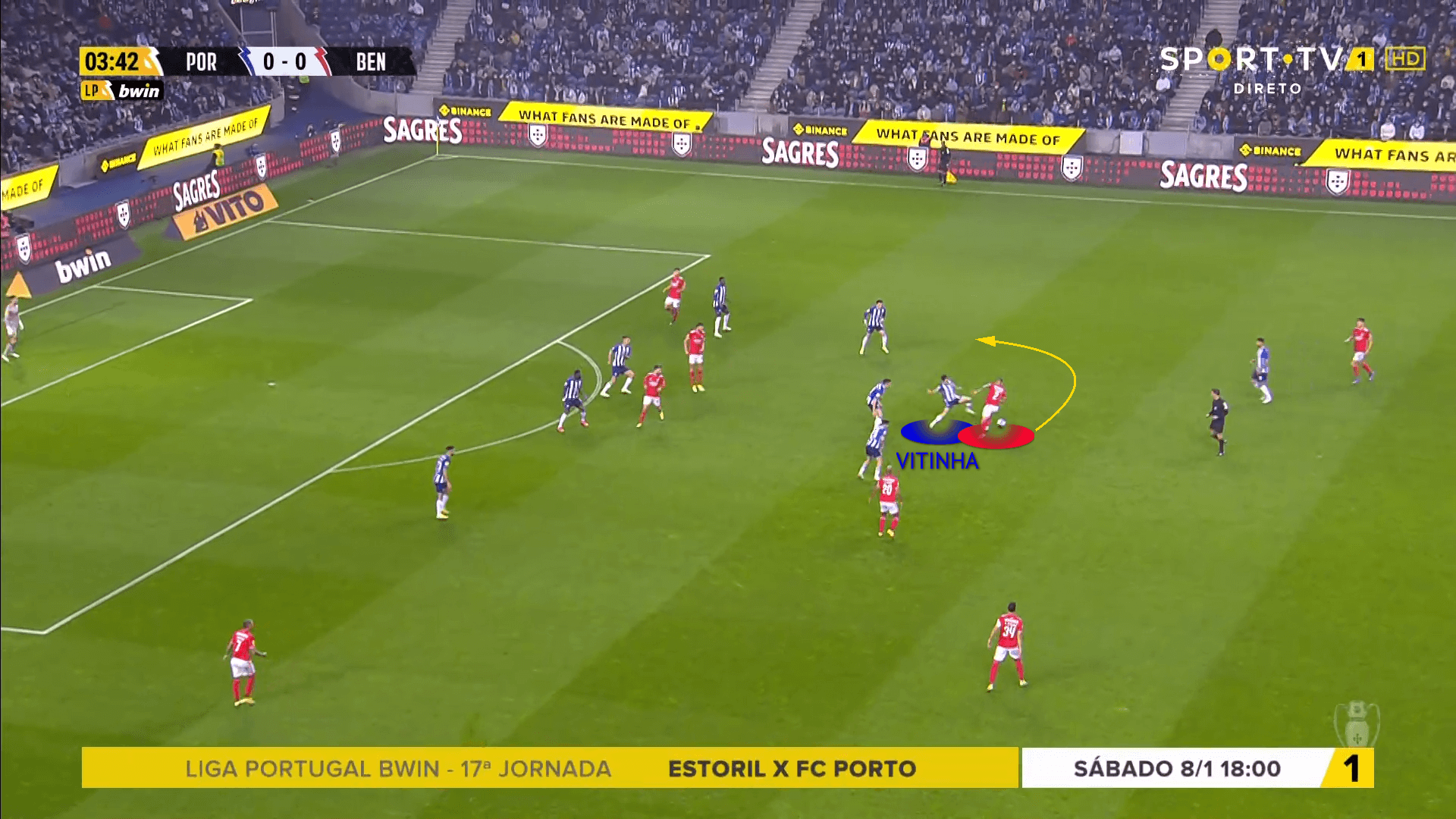 Further, when going to the ground, Vitinha did not win the ball cleanly, resulting in one of two ways — the ball either bobbles away without Vitinha not regaining possession, or him missing the ball entirely.

While supplying creativity in the final third, Vitinha is also tasked with helping his team progress the ball through from the first phase of play. When beginning attacks, Vitinha operates slightly deeper compared to his midfield partner, and splits the centre-backs, like a number six. In deeper positions, we can see his ball retention skills and capacity to evade pressure through dribbling. When playing against a press, Vitinha well uses his first touch; quickly shifting the ball into space and getting around the opposition player. Vitinha is quite illusive, as he obtains swift body movements, which aid him when 1v1 against the opposition, with his no-touch dribbling.

Here, Vitinha receives the ball on his right foot, inviting the opposition player, who is trying to apply pressure to the same side as the ball. With a quick switch of feet, Vitinha plays the ball onto his left foot, takes a big touch into the open space ahead of him and progresses the play. 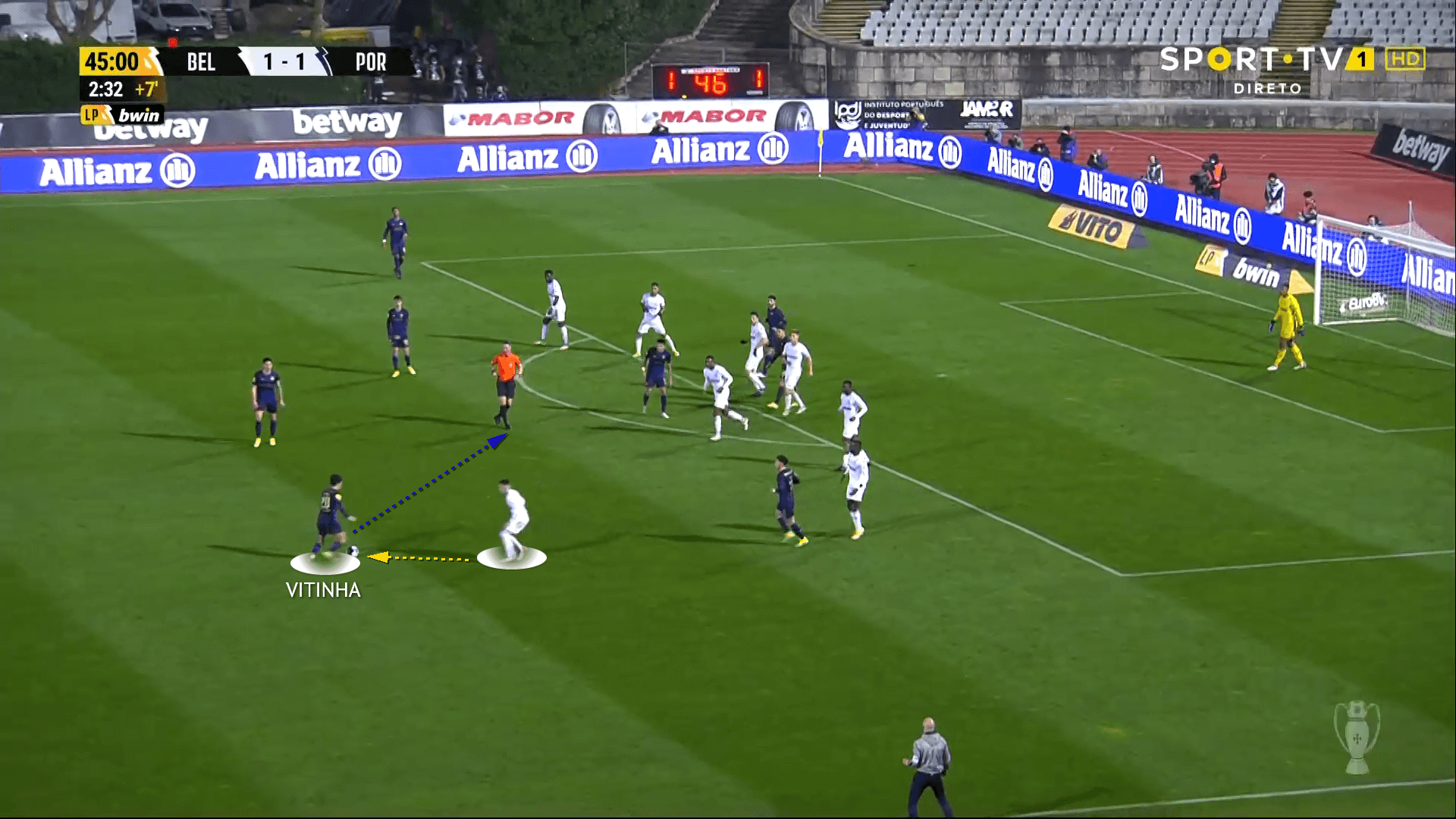 Vitinha’s dribbling style and speed of thought is allows him to escape from pressure within tight areas, the young midfielder does well to quickly find solutions when in tight spots.

When observing Vitinha, the talent is clear for all to see, as he is game is so multi-faceted. Within all three thirds, as he adds value to FC Porto. Vitinha can operate deeper and makes use as a tempo setter, changing and speeding up the point of attack at his will – gets up and down and contributes defensively like an 8 and can create within the final third and facilitate attacks at the very least in these positions like a 10.

An argument can be made that could argue that a player that can play is utilised in multiple roles is usually considered a utility player, jack of all trades, master of none. This is not the case. Players like Jude Bellingham and Luka Modric can occupy those three seamlessly because their skill set is multi-layered, yet high quality. With this in mind, Vitinha is a number 8 by trade, but so much more, and managers should not be afraid to apply his skills in a variety of ways. Vitinha is a genuine star in the making, and if he follows along the line of his development trajectory, Wolverhampton Wanderers will regret not keeping him all for themselves.