George Bello has become the most recent American youngster to make the move to the Bundesliga, with the left-back making the switch from Atlanta United to Arminia Bielefeld.

Bello had previously been linked with a move to the Premier League with Watford, but in a dramatic turn of events, Atlanta had reportedly agreed a deal with Cercle Brugge, only for the left-back to force a move to his preferred club, Arminia Bielefeld.

The transfer makes him the third American to join a Bundesliga club in January, with Kevin Paredes joining Wolfsburg and Ricardo Pepi joining Augsburg, whilst the likes of Joe Scally at Borussia Monchengladbach, Chris Richards at Hoffenheim (on loan from Bayern), Gio Reyna at Borussia Dortmund, and Tyler Adams at RB Leipzig, continue to prove there is excellent young talent coming out of America, who can make the step up into one of Europe’s elite leagues seamlessly.

This tactical analysis and scout report will provide more information on the type of player Bello is, whilst giving an analysis on the tactics he may best suit.

Bello turned 20 last month and is already a fully-fledged international for the USA, whilst he was a regular for Atlanta United last season. Bello is versatile and is comfortable playing as a left-winger, and even spent minimal minutes in central-midfield and at centre-back too. However, he is predominantly a left-back, who can play as a full-back in a back four, or as a wing-back in a back five.

His heat map for Atlanta United from the 2021 season shows a great deal of action in either half, and even a high number of actions inside the opposition penalty area, showing Bello penetrates this area with some regularity. There is also a respectable amount of action in a slightly more narrow position, indicating Bello doesn’t just stay anchored to the left-flank. 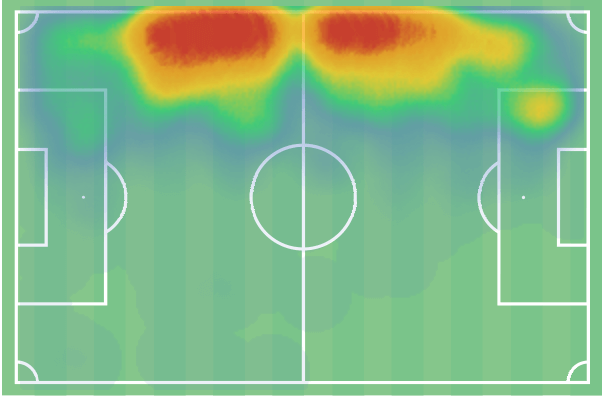 Whilst Bello may initially catch the eye due to his presence in attack, he is first and foremost a solid defensive performer.

The graph below looks at a few key defensive metrics in relation to the rest of the left-backs in the MLS to have played at least 500 minutes in 2021. We can see that whilst his volume of defensive duels is below the league average, his 65.72% win rate is well above the average. 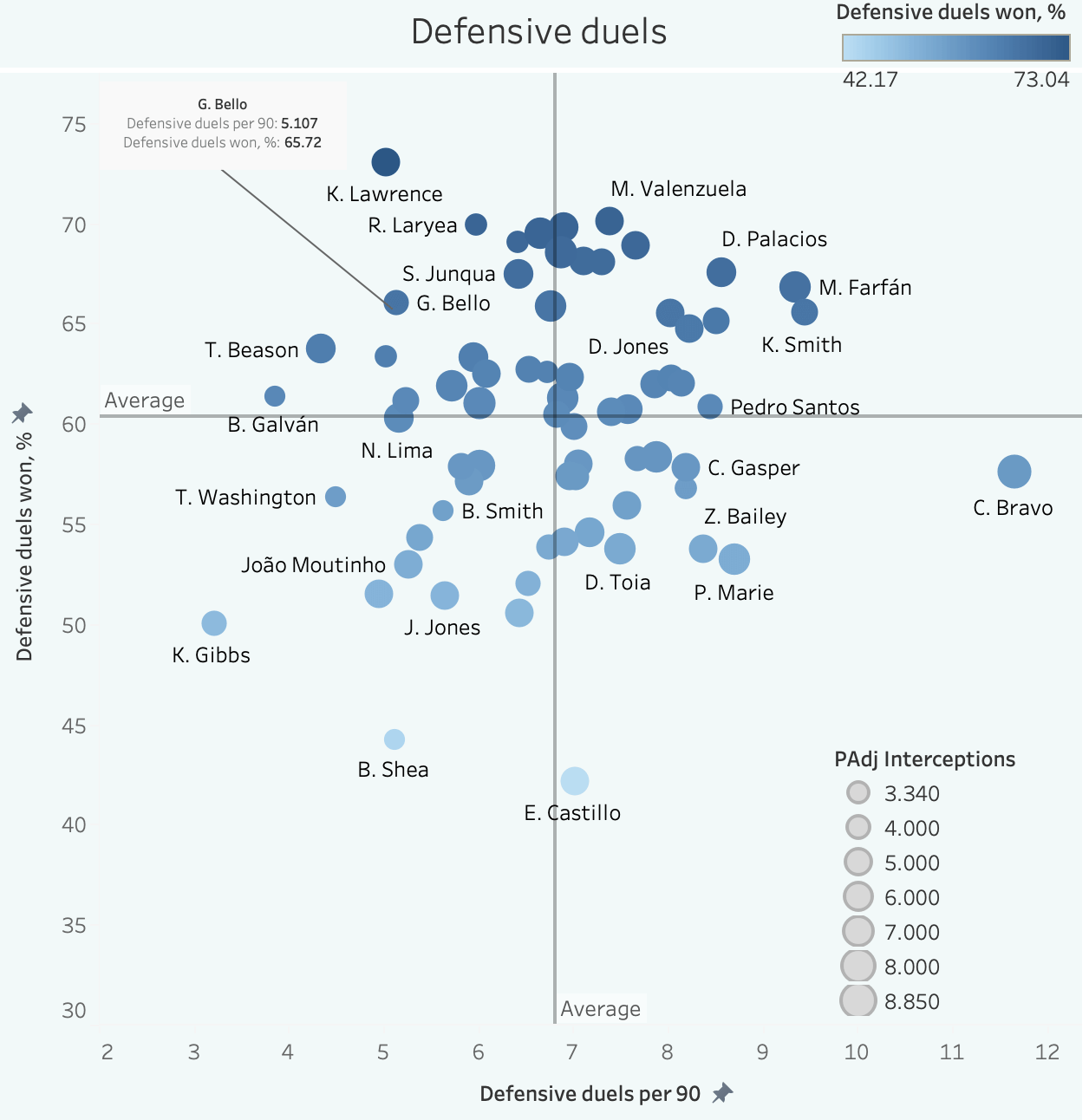 Bello consistently gets to the opponent quickly, decelerating as he approaches and gives good distance between himself and the opponent where he is still a threat but can’t be beaten easily in a 1v1 duel. He gets side-on and low-down as you would expect, but has the ability to change direction and recover regardless of which direction the ball-carrier dribbles.

Bello is comfortable pushing wide to pursue an opponent even if this leaves plenty of space between himself and his inside centre-back. This may leave some coaches nervous, but Bello has the mobility and pace to deal with an aggressive touch from the ball-carrier in a position like the one shown in the following image. 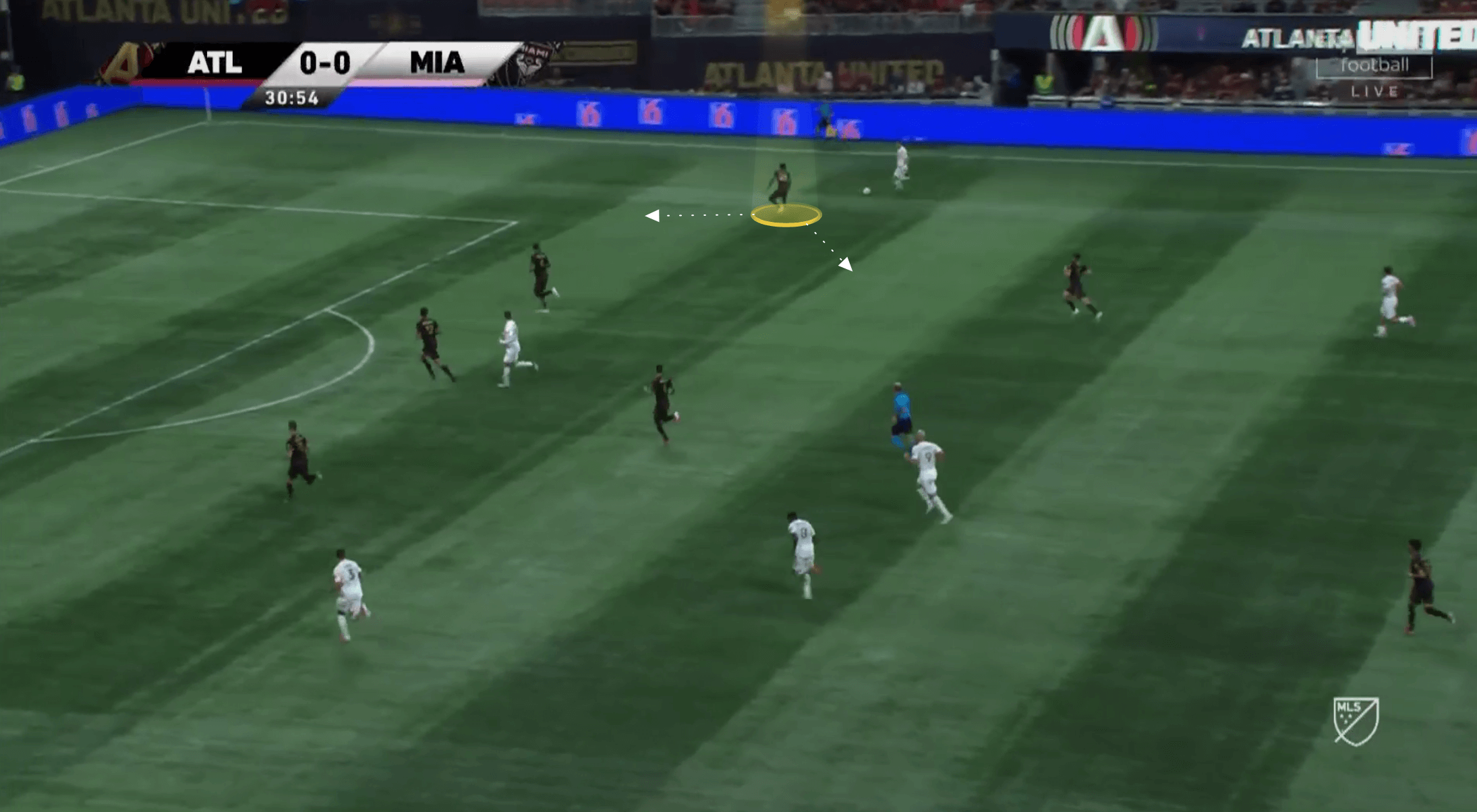 However, this isn’t to say Bello is cavalier with his positioning; in fact far from it. He is generally disciplined at tucking inside into a narrower position and will only press these areas once the pass has been played out into this area. He doesn’t allow the ball to get in between himself and his inside centre-back with a through pass.

We can see such an instance of this in the image shown below. Bello tucks inside, preventing the inside through pass, and waits for the pass to be made out wide. He has the pace over this short distance to not only press such a pass, but to get to the ball before the overlapping opponent. 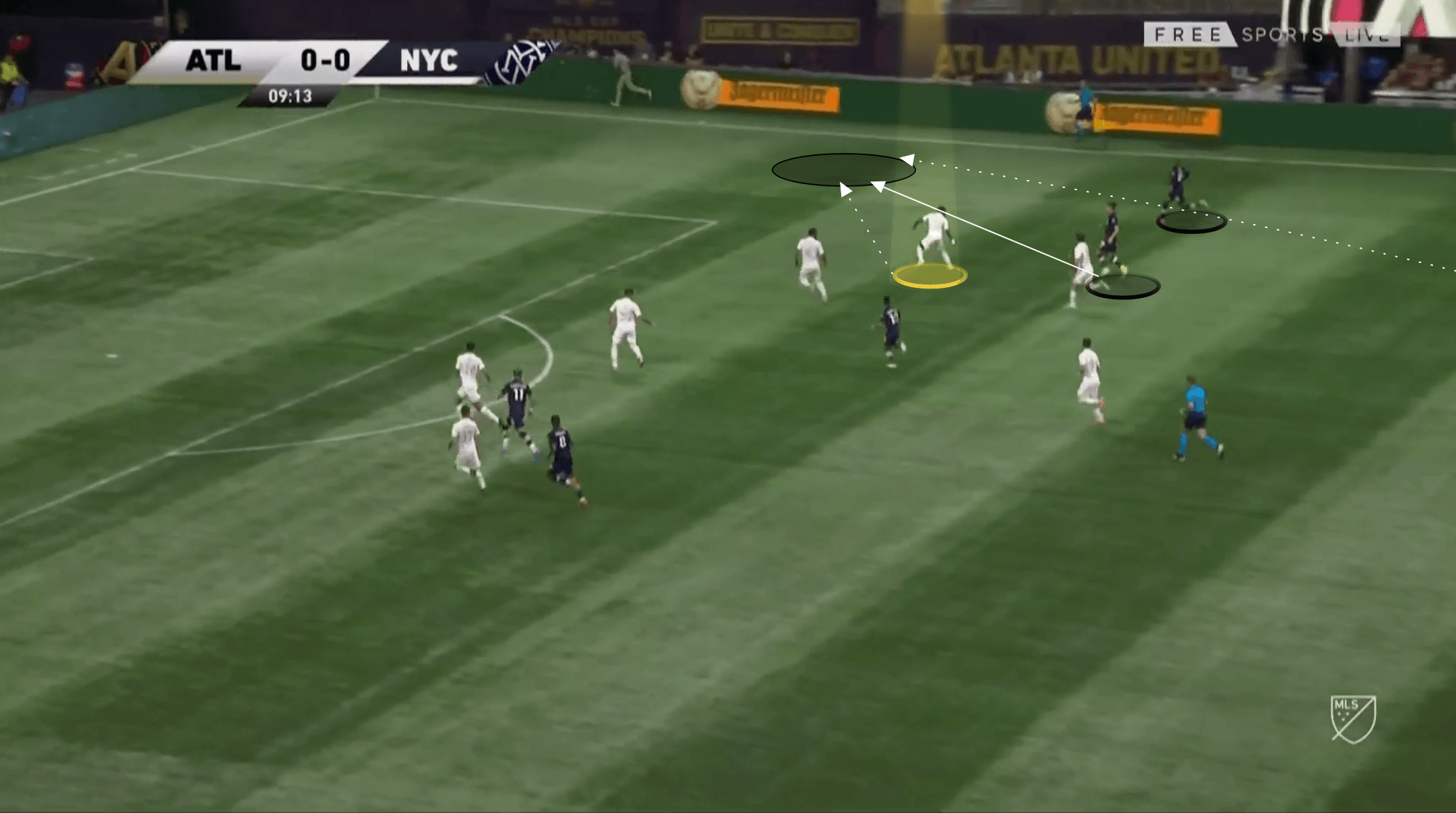 Bello consistently scans out of possession as well, and has a good awareness of his own positioning, his teammates’, and that of the opposition as well. He will cover his centre-backs if they are drawn out of position and can make blocks and last-ditch challenges, showing a good sense of danger. The block seen in the following image exhibited this perfectly, stopping an easy goalscoring opportunity for New York City FC. 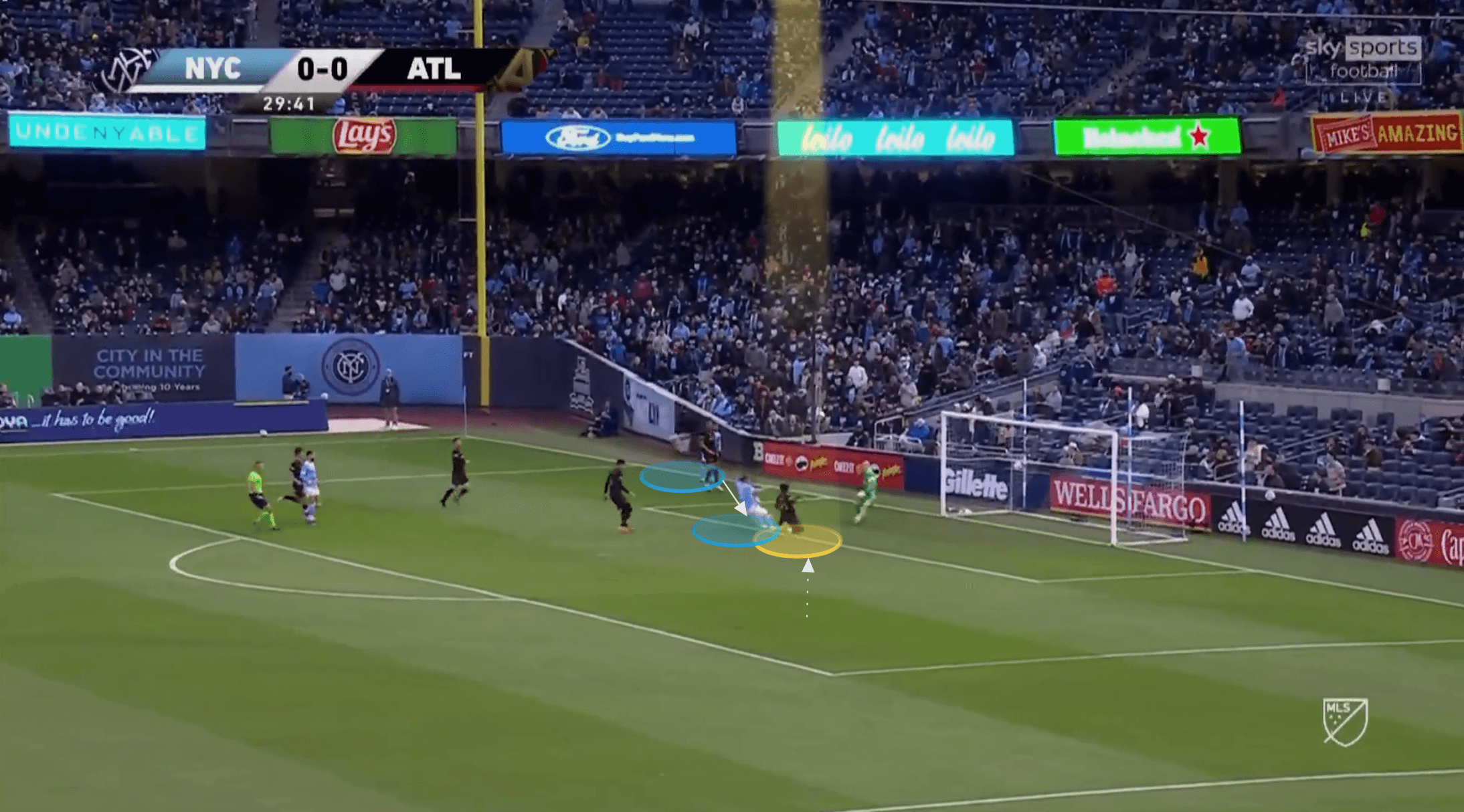 Presence down the left-flank

Bello varies his positioning, but regardless of where he positions himself, he is consistently involved in possession play.

Firstly, during build-up play, he will drop wide and deep, and will stretch the opposition press through this positioning. He can be found during build-up when his team face an intense opposition press. Bello is comfortable receiving under pressure. We can see him doing so in the following image, receiving a difficult to control pass from his goalkeeper whilst the press comes from inside in this instance. He varies where he goes with the ball. He can take an aggressive touch either way, play a first-time pass inside, or open up his body and clip the ball down the line, and he does all of these confidently and with good execution. Bello is highly reliable in possession. 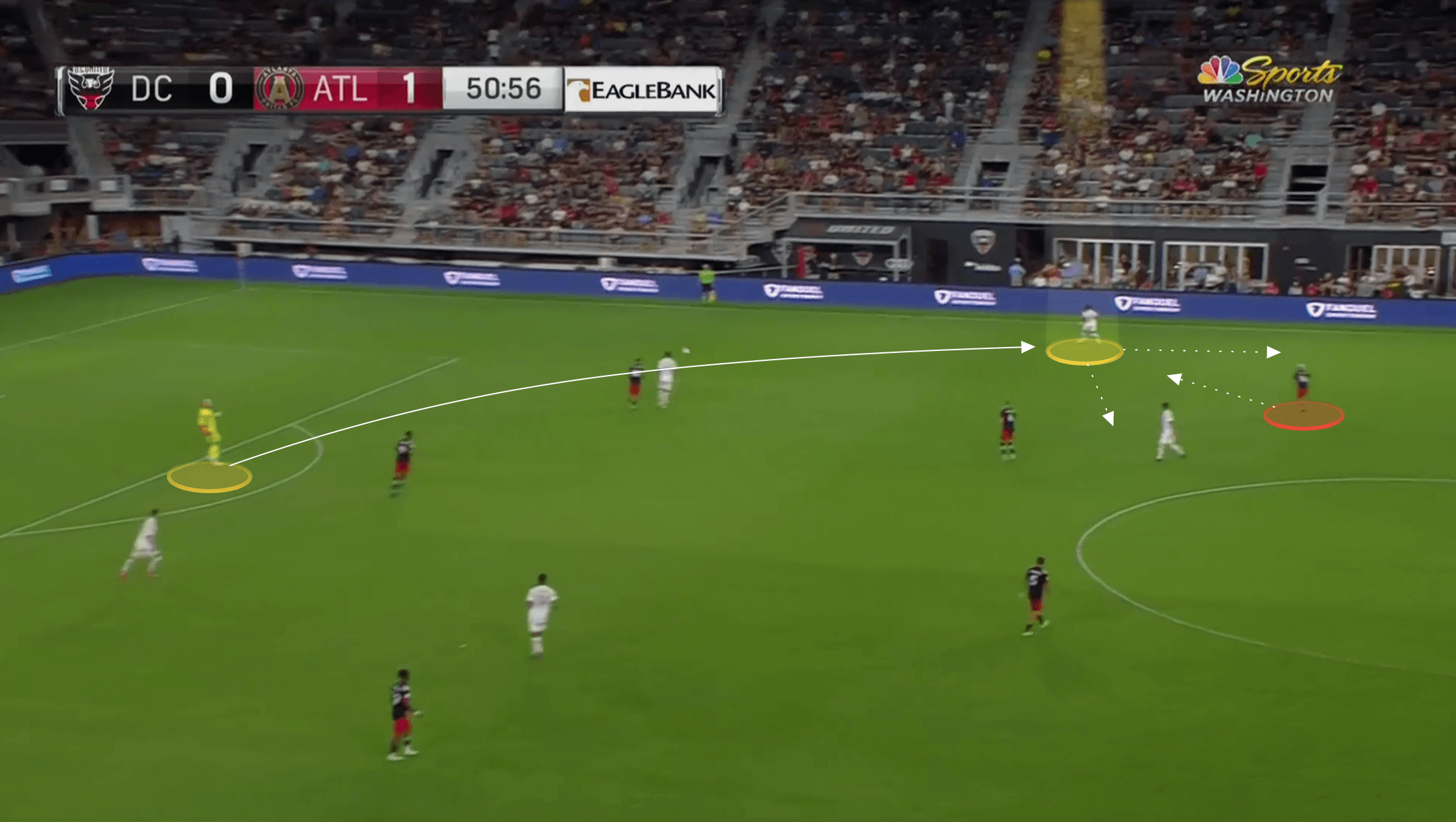 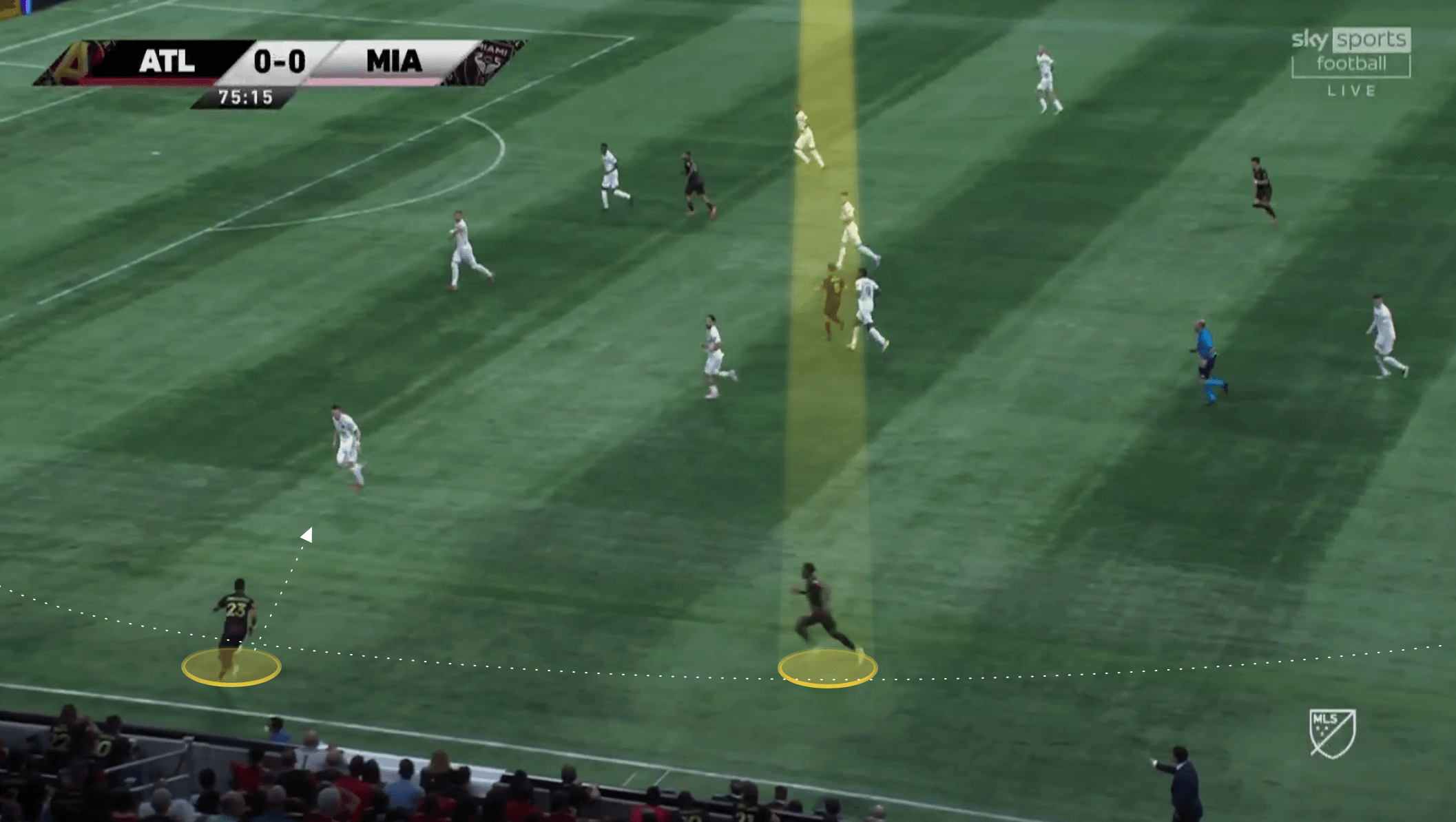 However, Bello doesn’t just limit his movement to being out wide on the left. He will move freely inside, and whilst still overlapping, he will move through more narrow positions too.

Bello’s ability to time these overlaps and push forward at this outstanding pace makes him a highly useful individual in attacking transition. Bello is often highly active in this phase of the game and if the ball-carrier can move centrally, delaying possession slightly and narrowing the opposition who are in defensive transition, it creates the perfect opportunity for Bello to get by them and provide an immediate option on the left side of the pitch. 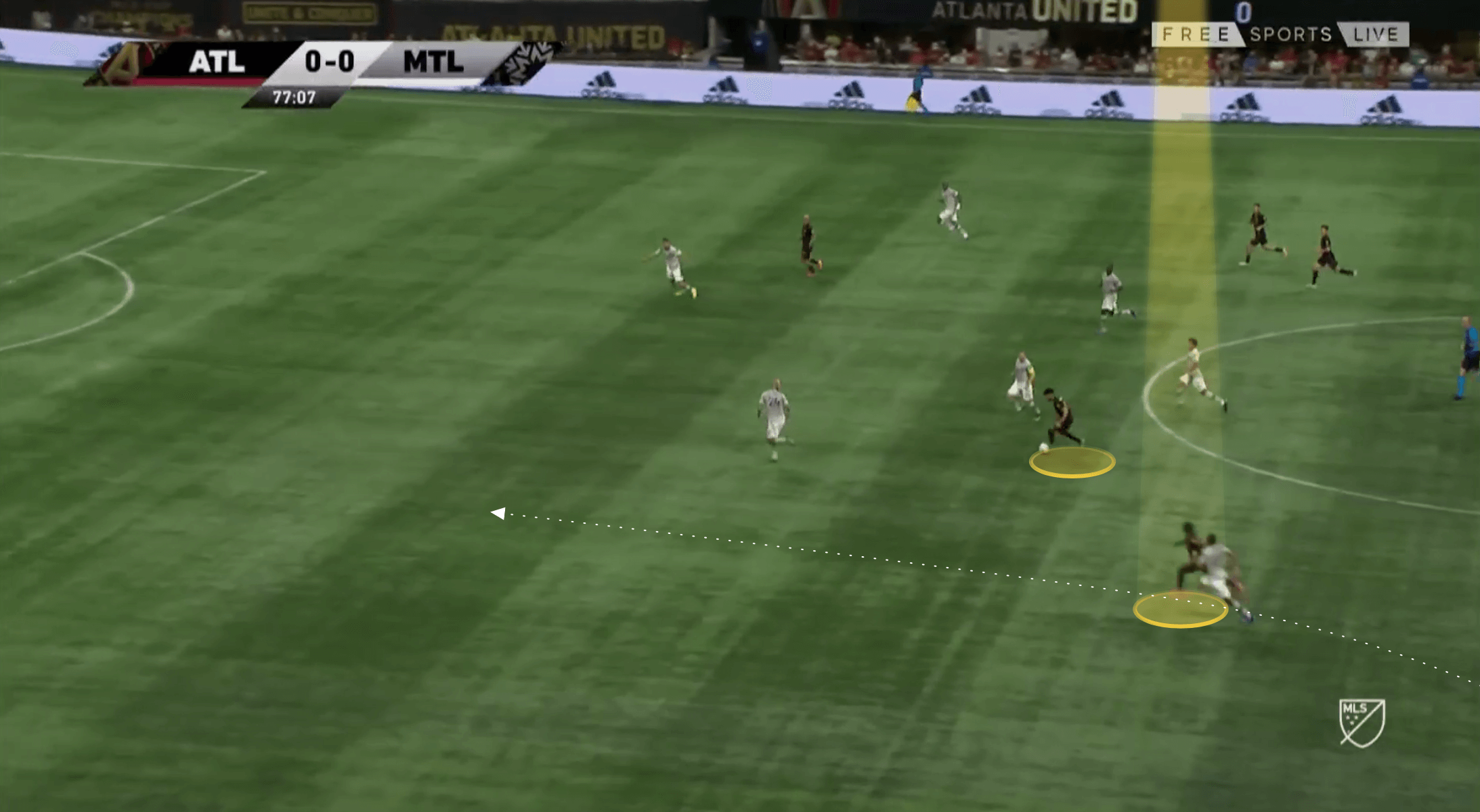 It isn’t uncommon to see Bello push far forward, even acting as the farthest forward attacker on the pitch at times. He can angle a run in behind, and whilst he might be found with a direct, diagonal ball over the top, he is also an option for a straight through pass through the central channel. 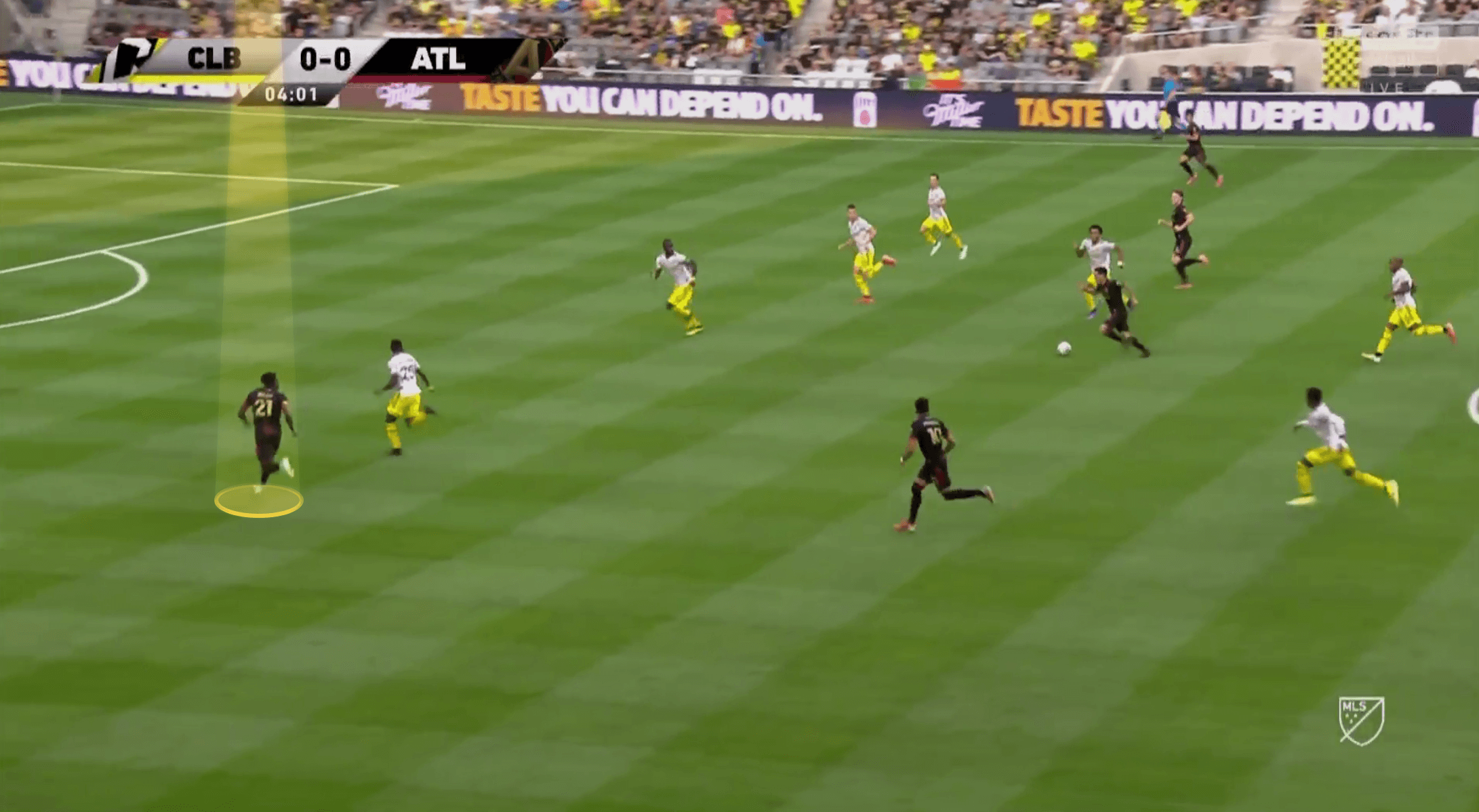 Bello’s attacking metrics from the 2021 MLS season make for interesting viewing too. Bello doesn’t play an overly impressive volume of crosses and is just under the league average for completion. This is an area of his game where he shows flashes of quality, but there is a lack in the consistency and this is reflected in the following graph. The plot size shows his expected assists per 90 as well, which is 0.06 – not overly impressive. However, despite this Bello still notched three assists last season. 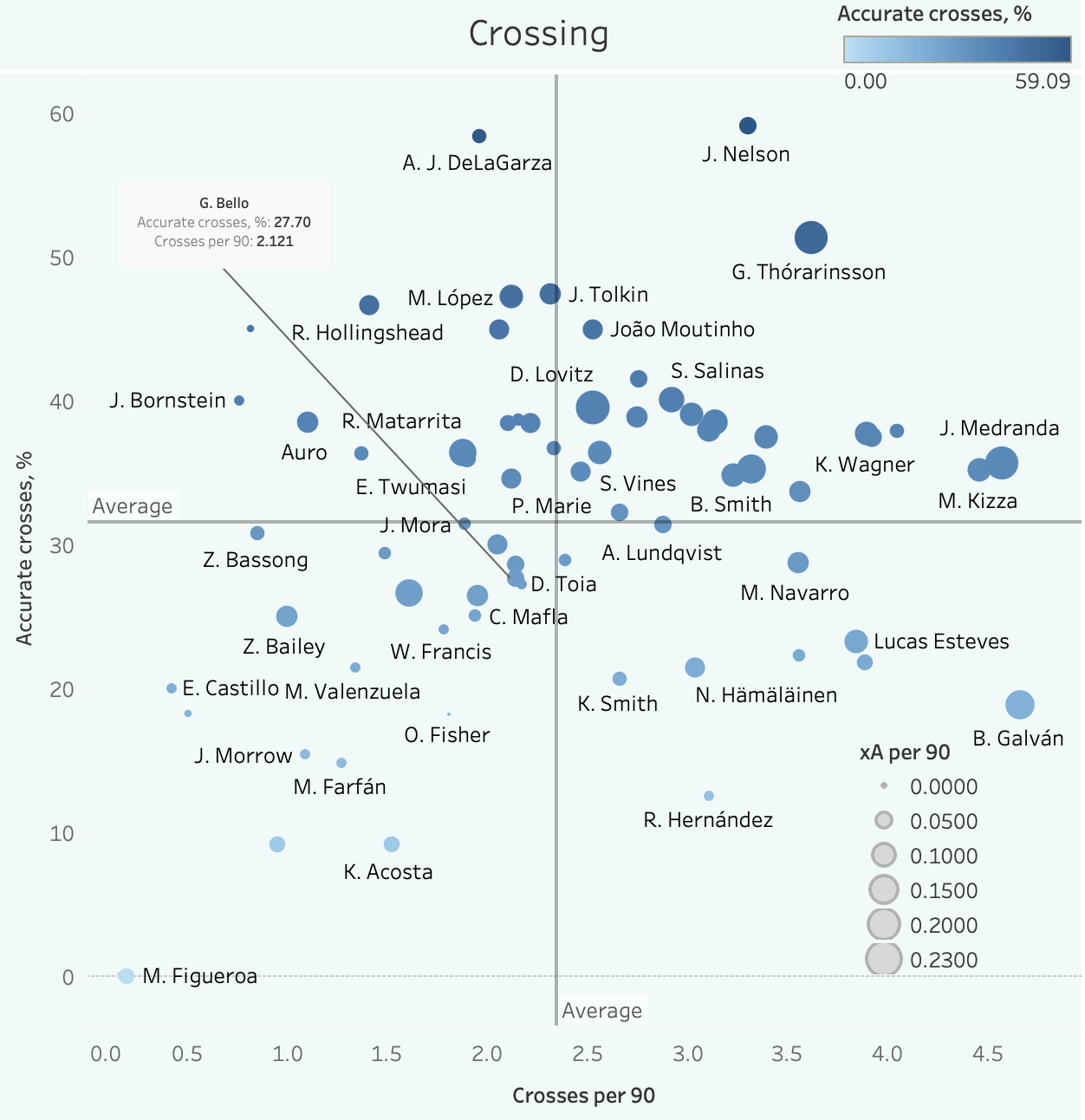 Bello’s quality is slightly more clear with his dribbling statistics. He may have only a slightly above average completion, with a 59.58 successful dribble percentage, but his volume of 3.032 is well above the league average. However, the plot size indicates his touches in the box per 90, which Bello averaged 2.37. This is an incredibly high number for a full-back, and we can see from his plot size that there are few with an equal amount of touches in the area. Whilst some of these touches come from Bello latching onto through passes, the bulk come from his ability to complete dribbles in the final third, and enter the box himself. Bello does this with some frequency, and although his dribbling doesn’t necessarily stand out immediately on the following graph, the quality of these dribbles is at the highest level. 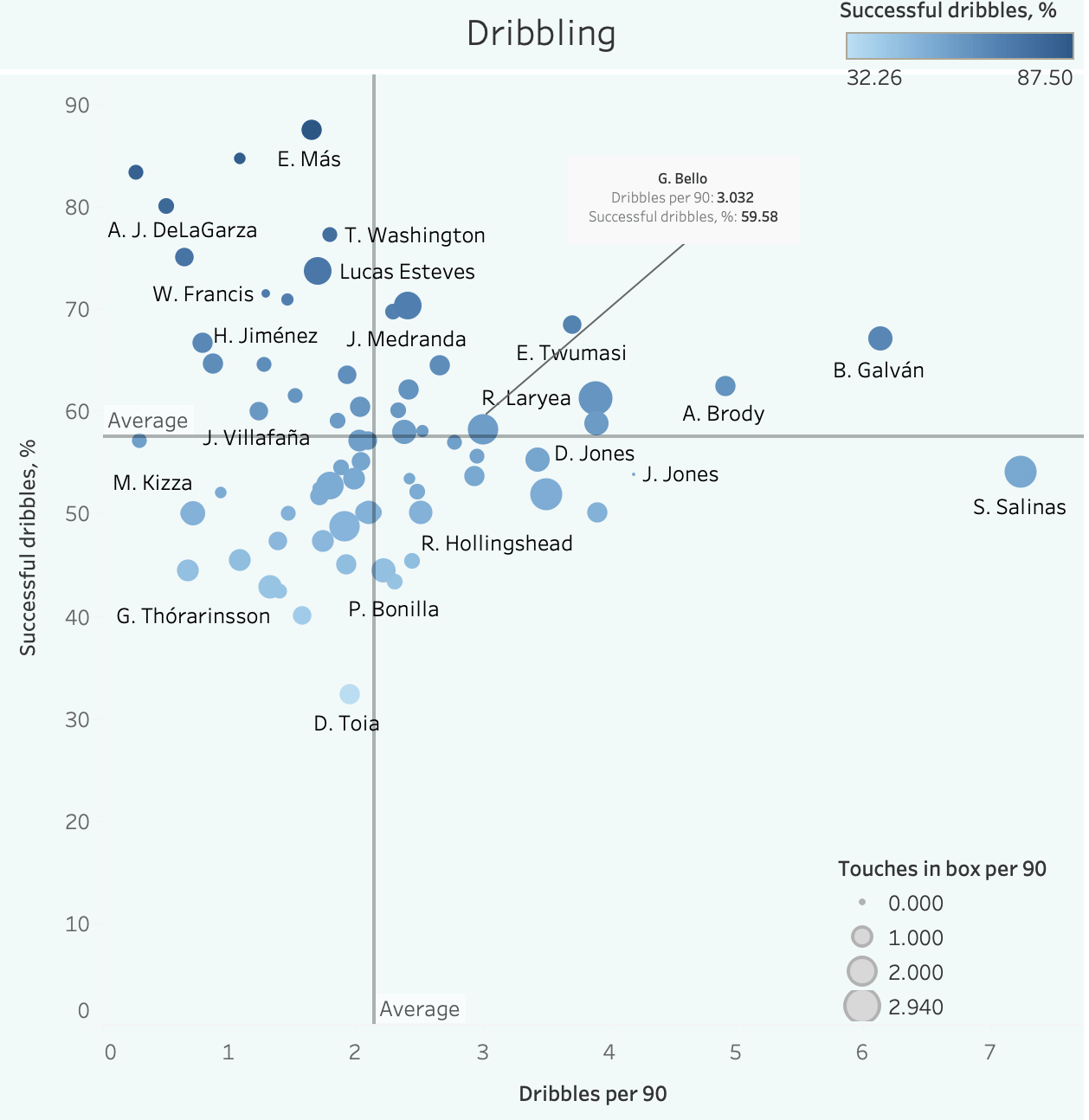 Bello will hesitate on the ball and doesn’t immediately look to attack the space behind the full-back. He looks to draw them towards him, and will dribble tentatively towards them, before quickly changing direction and angling his run into the space behind them. From these positions, he can look to pull the ball back or hang the ball towards the back post. 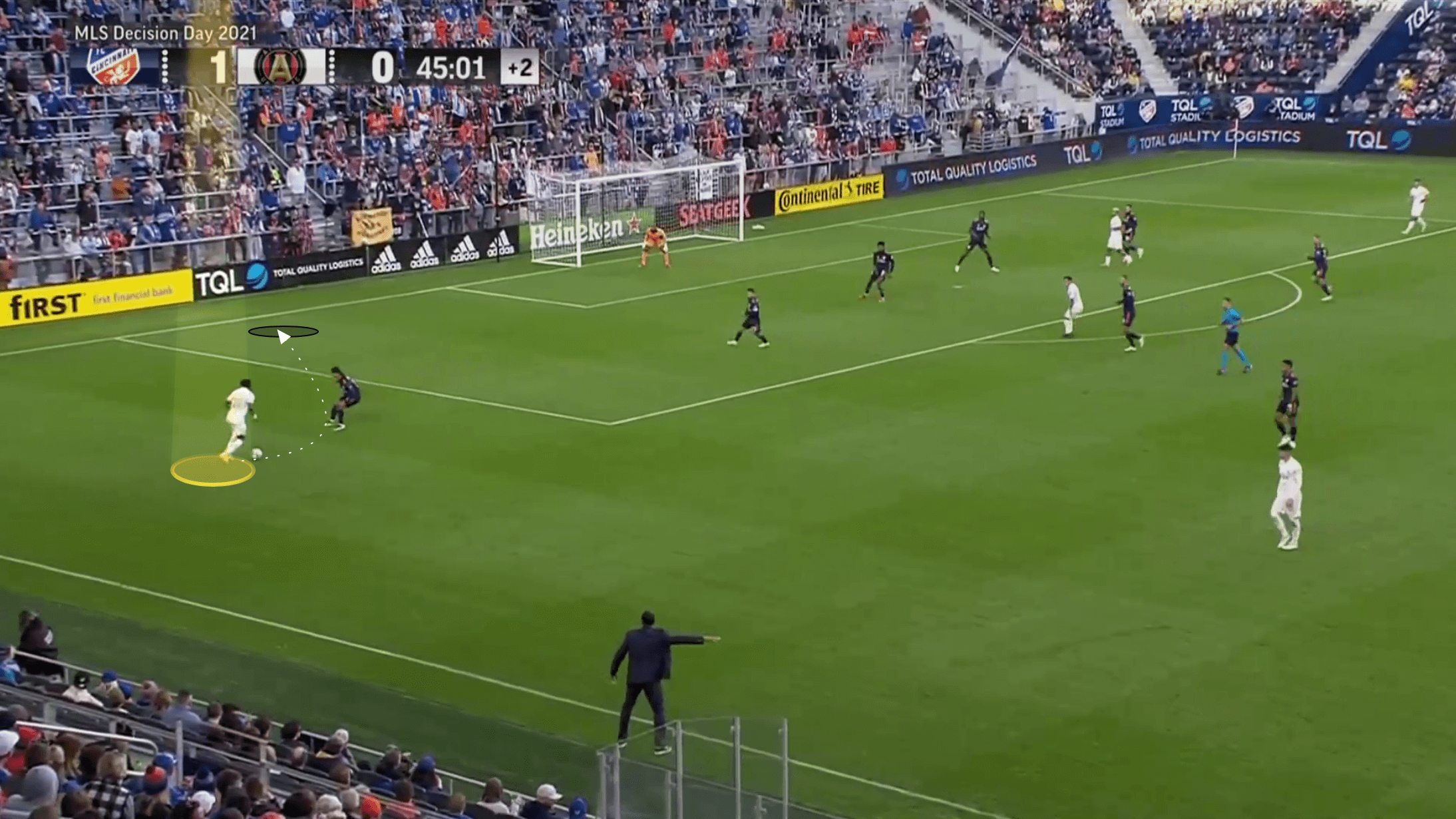 Bello can drill the ball or whip it in at head height, and will mostly look to do this from a slightly deeper position than in the previous image. He can be dangerous when doing this, and shows good technique at times, but this is the cross that Bello really needs to develop consistency with. 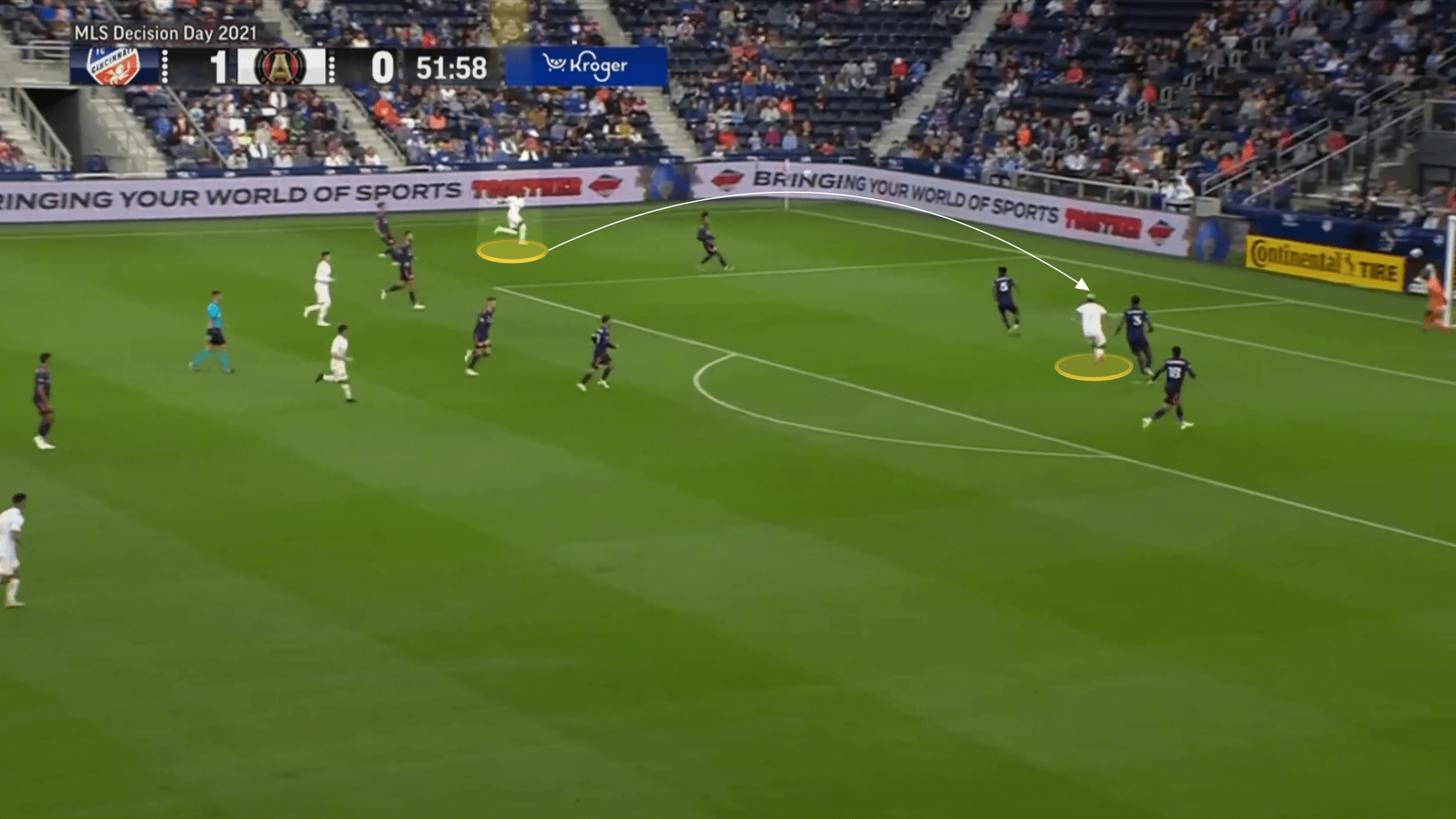 He isn’t just an independent player and links up cleverly with players inside from him. He may decide against attempting the dribble and is composed enough to delay the attack, get his head up, and play this pass. We can see the types of attacks this leads to in the following two images. 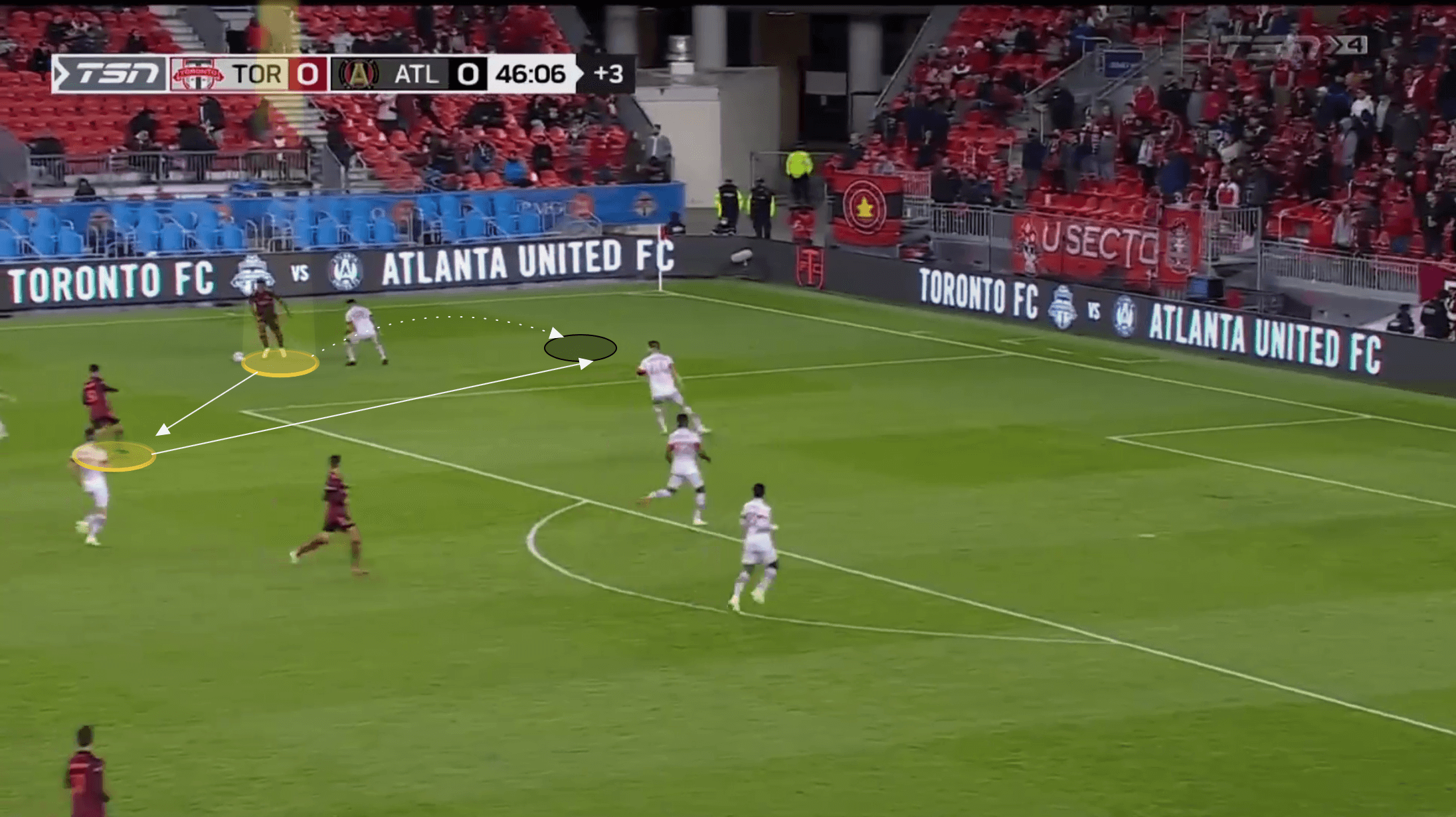 As he plays the pass inside he loops his run inside and is able to receive the ball back in the space behind the opposition right-back.

From this position, he shows composure once more and slides the ball back to the awaiting striker in the 18 yard-box. 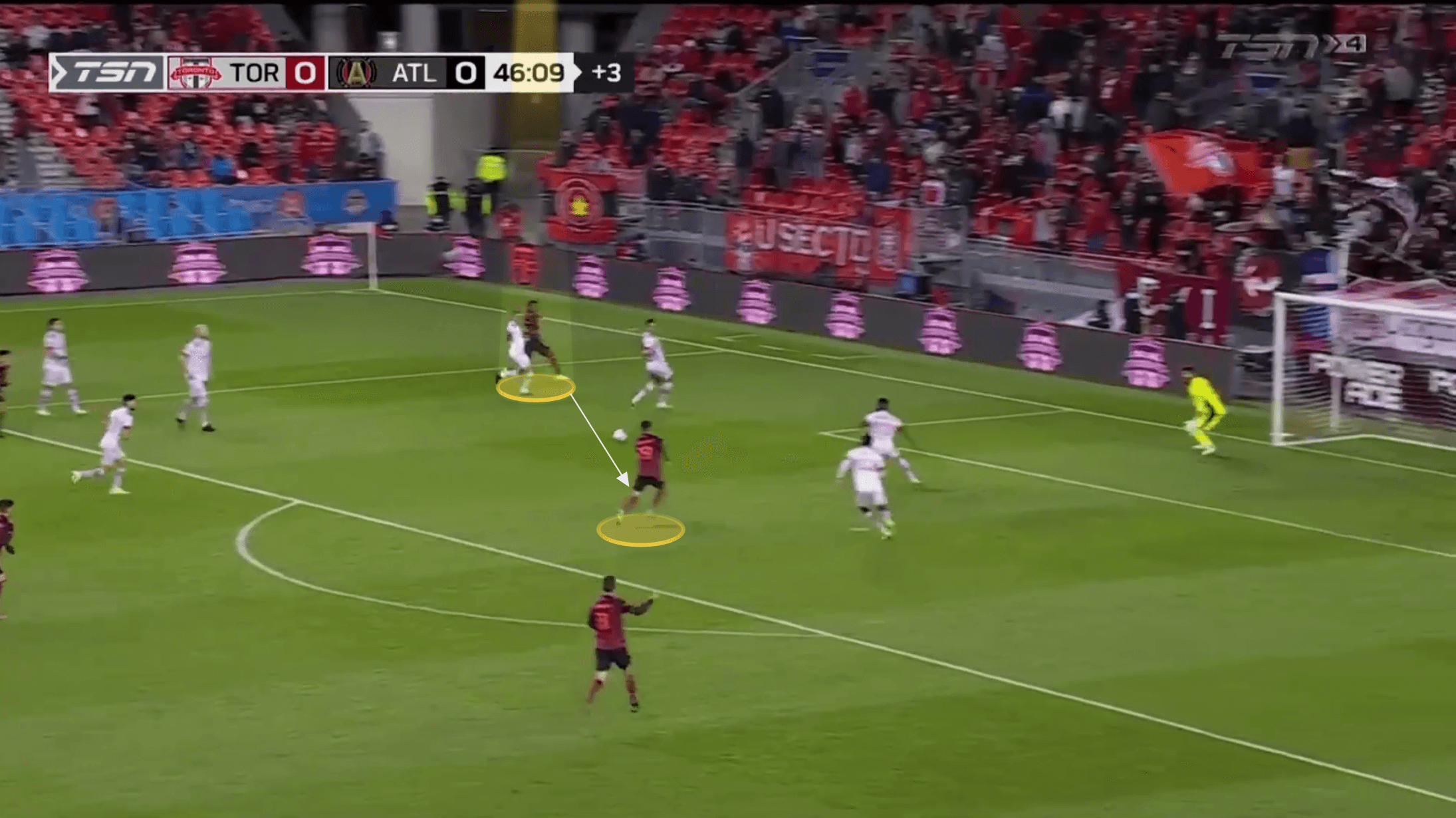 Bello is an innovative and skilful player – and he is unselfish too. No moment better exemplified this than his assist against Columbus Crew last season. After making an overlapping run on the left the ball was delayed and he wasn’t played into the space in front of him. As a result, he had to check his run but was still able to play this deft backheeled pass into the path of Ezequiel Barco to slot home. 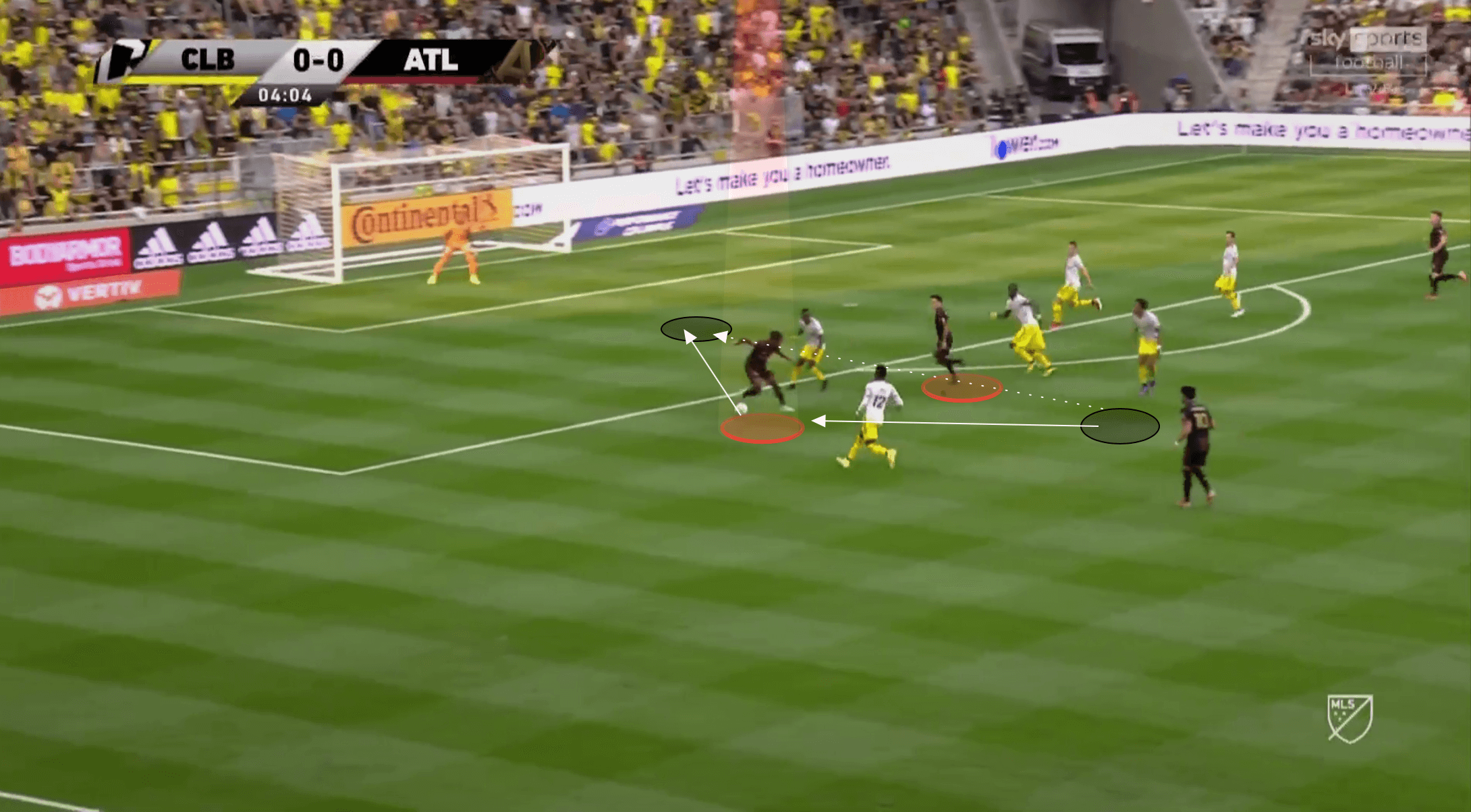 There needs to be patience with Bello’s development. He is a highly talented left-back with a high ceiling but still has to improve, particularly with his volume and accuracy as a crosser. Despite this, he can be expected to consistently provide a presence in build-up play and to provide height and width in attacks. Yet he isn’t just an attacking force and can be expected to be a reliable defender and to continue to grow into a top-level defender at left-back for Arminia Bielefeld.