In our second data analysis piece on OBOS-ligaen, we will be looking out for the best full-backs currently playing in the league using data. Full-backs have come a long way in redefining their traits in the modern game. Gone are the days when they had a very limited task to do only defending. Modern managers are hugely dependent on their full-backs for the team’s successful tactics and their roles have also evolved where some of them play as a midfielder by inverting into the midfield during possession.

In our analysis, we will be considering both the attacking as well as defensive attributes. We will be looking at players who registered at least 900 minutes of football in the 2021 league season. Also, only proper full-backs are taken into consideration i.e. no makeshift options included.

We will shortlist the best options according to the statistics and data analysis. Let’s dive deep into the analysis.

The most important thing for any player or position in football is probably to identify their best-suited abilities. Different players playing in the same position will have different abilities both offensively and defensively. Likewise, full-backs will show both defensive as well as offensive capabilities. In order to account for the profile of the FBs that we are looking into we compare them with respect to how well they perform their attacking and defensive actions. We can see the plot in the image below that compares the FBs in Superliga with this regard. 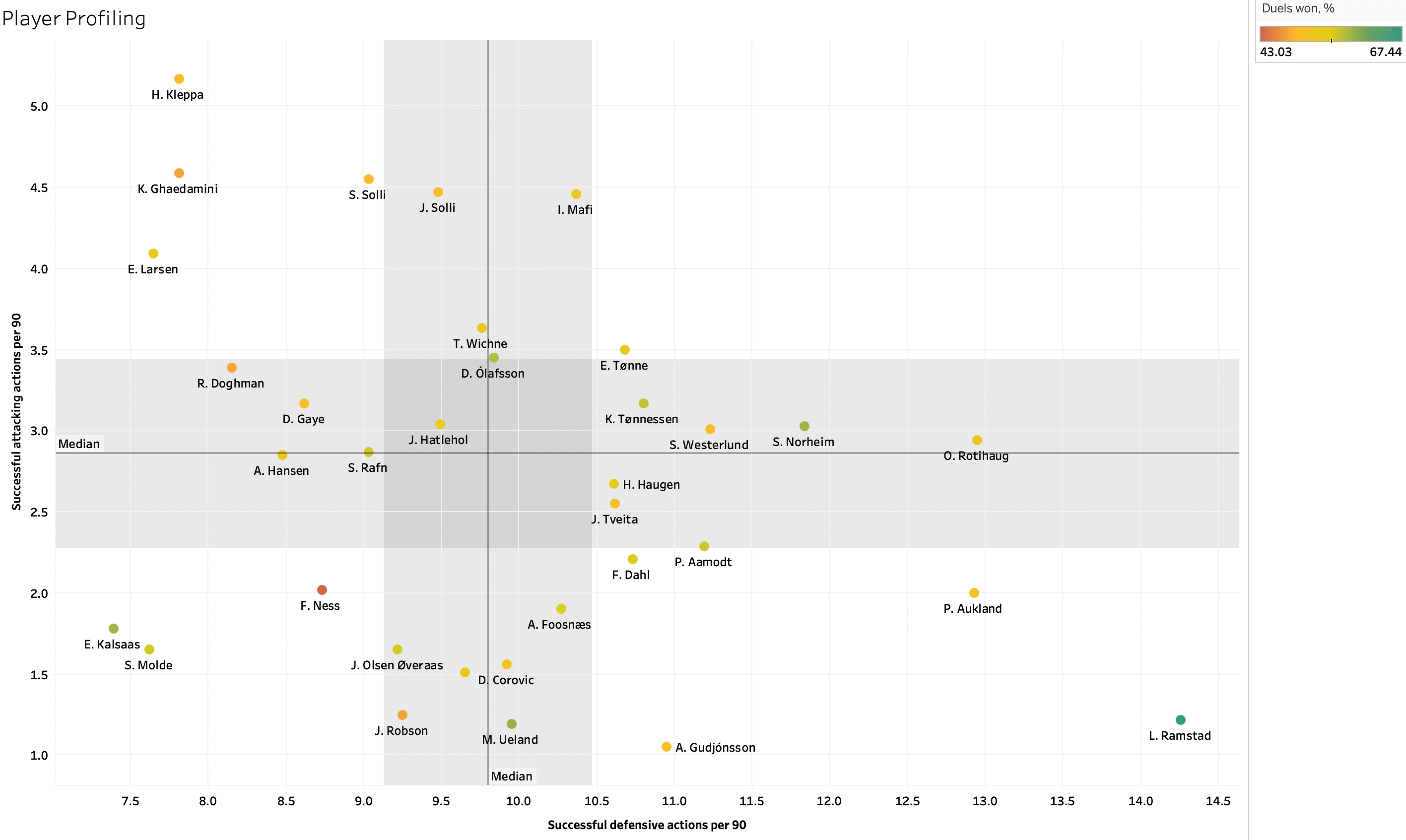 Looking at the graph, we see the following players are performing in huge volumes with respect to these metrics.

Sondre Norheim – The 24-year old defender from Bryne FK. The youngster has played in multiple positions for his side and has featured across the backline. He is a full-back by trade though and mostly plays as a right-back for his side. He averaged 3 successful attacking actions per game and 11.84 successful defensive actions per game. He had also won 58.6% of duels that he contested.

Erik Tønne – The 30-year old veteran from Ranheim. The experienced left-back has also played as a wing-back or a wide player occasionally for his team this season. He recorded 3.5 successful attacking actions per game along with 10.68 successful defensive actions per game.

Iman Mafi – The 27-year old left-back from FK Jerv. He has recorded 4.46 attacking actions per game and 10.37 successful defensive actions per game in the 2021 league season. He also won his defensive duels at the rate of 53.44%.

The next thing we look at is how the players perform in the defensive aspect of the game. We compare the full-backs with respect to their defensive duels and interceptions stats that they have recorded per game over the course of this season. Despite the modern-day full-back required to be very good on the ball, their share in contributing to the defence can never be undermined and is equally very important for a full-back. 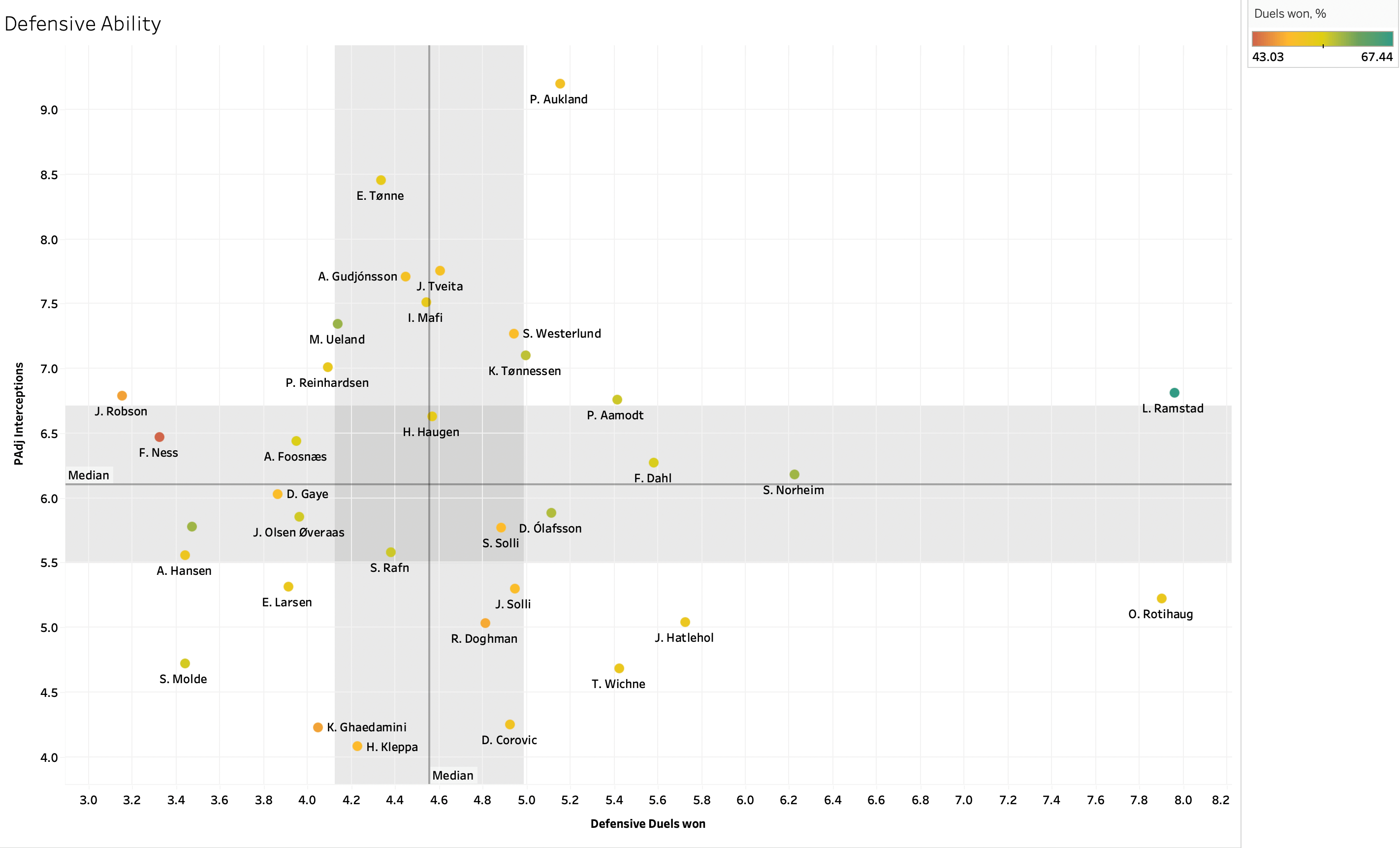 The best performers in this category are:-

Lars Ramstad – The 32-year old right back from Stjørdals-Blink. The veteran recorded 6.81 PAdj interceptions and won 7.95 defensive duels on average in the league last season. He also had a duel win % of 67.44% which is the highest among the full-back present in the league from last season.

Phillip Aukland – The 23-year old right-back from Fredrikstad. He averaged 9.2 PAdj interceptions per game which was the highest in the league last season among the full-backs. He also won 5.15 defensive duels per game on average where his win % for them was around 51%, which is a decent measure.

FBs are also tasked with moving the ball to the final third and helping the team to ensure that they can go to the final phase of the play. Also, there are some teams that depend on their full-backs to play out from the back. The likes of Bayern Munich, Liverpool and Manchester City use their full-backs to great effect to seamlessly build play out from the back. 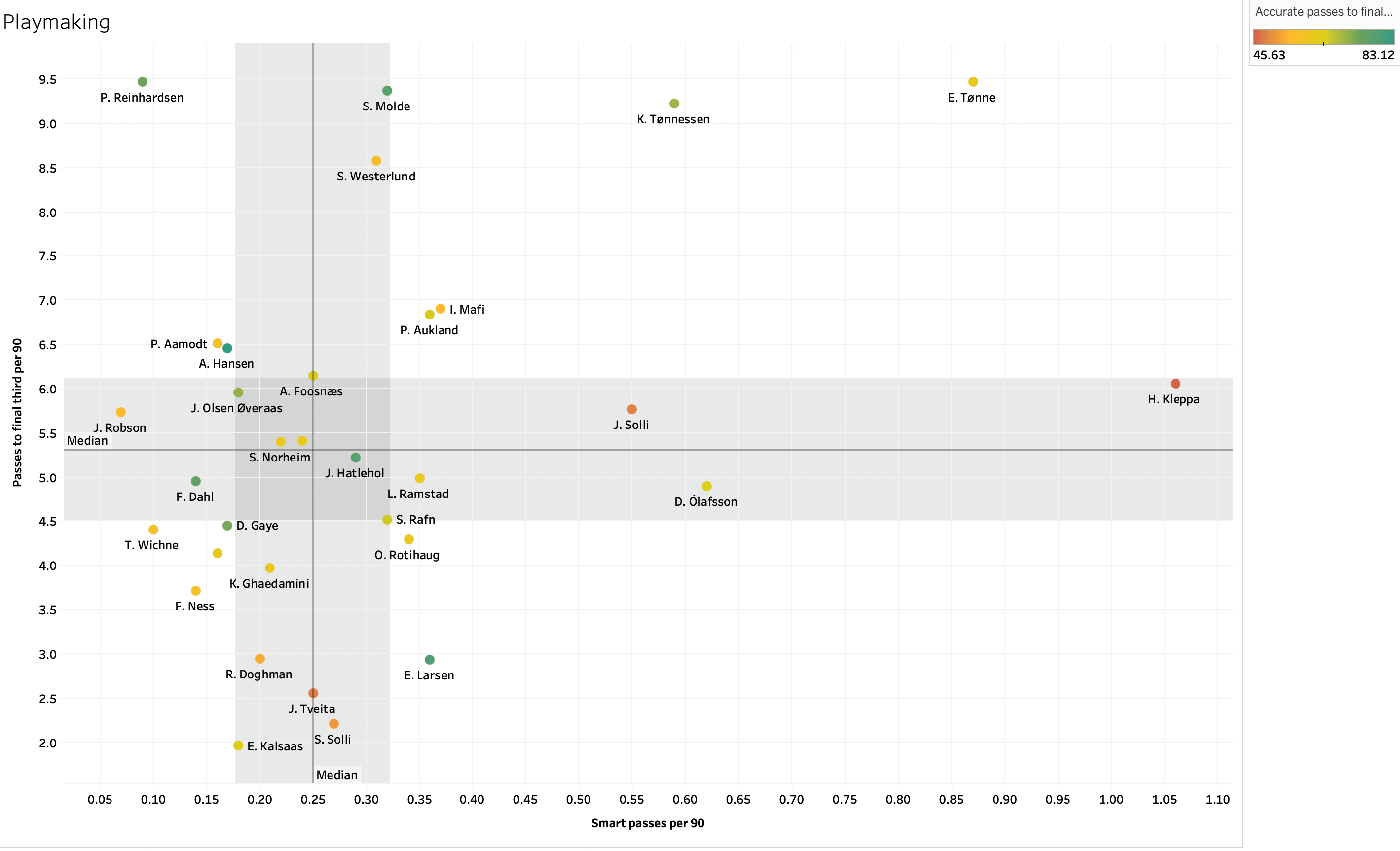 Erik Tønne – The experienced full-back recorded 9.47 passes into the final third with an accuracy of almost 62%. He also averaged 0.87 smart passes per game in the league last season.

Herman Kleppa – The 25-year old right-back from Mjøndalen IF. He recorded league-high 1.06 smart passes per game last season and also averaged 6.05 passes into the final third with an accuracy of 45%.

Stian Molde – The 25-year old left-back from Fredrikstad. He recorded 9.37 passes into the final third with an accuracy of 77.15%. He also made 0.32 smart passes for his side which is above average for the league and a decent number for a full-back.

Kristoffer Tønnessen – The IK Start left-back recorded 9.22 passes into the final third with an accuracy of 69.7%. He also made 0.59 smart passes per game in the league.

Sivert Westerlund – The Raufoss full-back 8.57 passes into the final third with an accuracy of 56.05%. He also averaged 0.31 smart passes per game in the league.

Phillip Aukland – The Fredrikstad right-back averaged 6.84 passes into the final third per game with an accuracy of almost 65%. He also made 0.36 smart passes on average every game showing his contribution to his side’s progressive play. 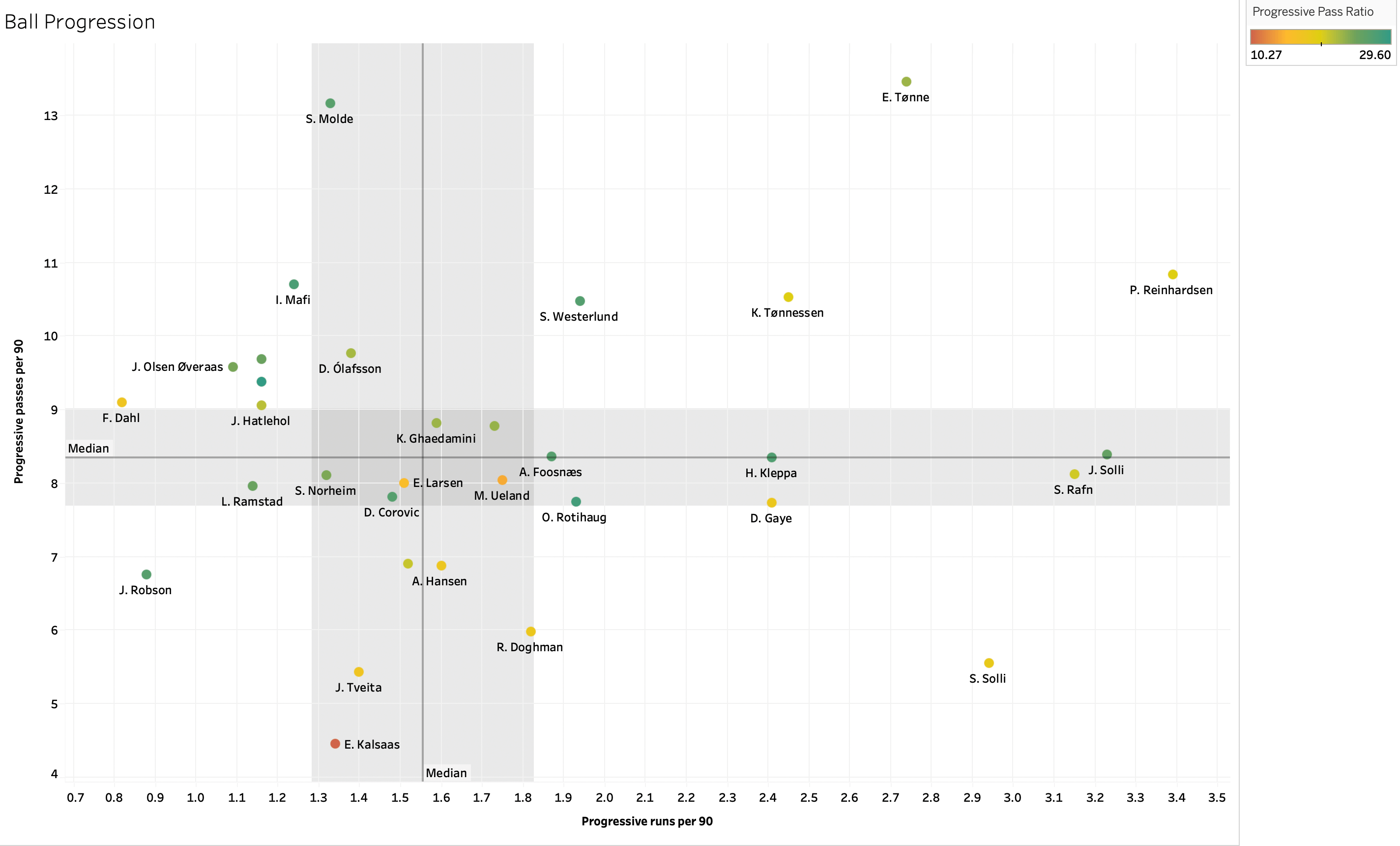 The final phase of play and potentially the most crucial aspect from an attacking sense is the creation of chances for their team’s forwards. This is where a lot of FBs, especially the attacking ones are judged based on their ability to consistently create chances. Full-backs are also expected to provide a width and be among the focal point of creation for their respective teams. Instead of comparing them with respect to their actual assist number that gets inflated due to great finishes we see their expected values and also their ability to make passes into the penalty area. 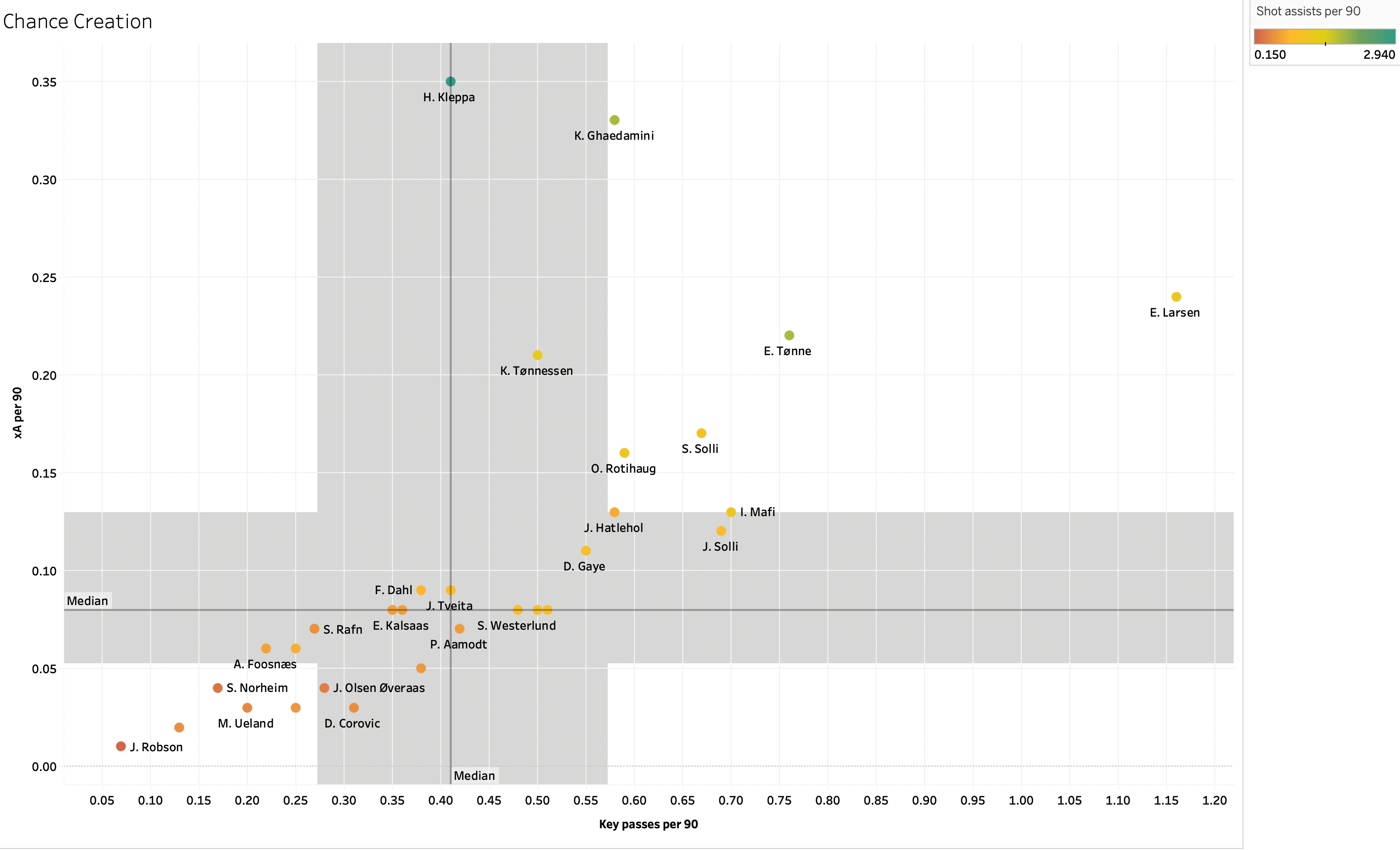 Erlend Larsen – The 26-year old Norweigan right-back from Asane. He recorded 1.16 key passes per game and also contributed to an xA of 0.24 per game. He also made 1.26 shot-assists per game last season.

Erik Tønne – He recorded 0.76 key passes per game with his assists being worth an xA of 0.22 per game. He also averaged 1.87 shot-assists per game in the league last season.

Keivan Ghaedamini – The 25-year old full-back who majorly plays as a right-back for his side KFUM recorded 0.58 key passes per game with an xA value of 0.33 per game. He also contributed 1.88 shot-assists per game in the league last season.

Sivert Solli – The 24-year old right-back from Ranheim averaged 0.17 xA per game last season while also making 0.67 key passes and 1.07 shot-assists per game in the league.

Herman Kleppa – The right-back from Mjøndalen IF recorded 0.41 key passes per game last season which is quite low compared to the other full-back we saw in this section. But despite that, he recorded a whopping 2.94 shot-assists per game and also contributed 0.35 worth of xA per game in the league. This shows that he was benefitted by his team’s nature to shoot a lot despite him not playing a lot of threatening or final passes.

Based on the data and the statistics we have shortlisted a few options to look out for in the forthcoming season where we expect these full-backs to make bigger strides.

The young full-back had already featured in multiple sections across this analysis where he ranked among the top category in terms of defensive ability, playmaking and also progression. We can see how all-round his game is as a full-back where he contributes a lot for his side both in terms of playmaking and progression as well as in terms of defensive values. We expect him to develop more in terms of his final output and chance creation that could see him being immediately poached by one of the top-flight clubs.

Another young full-back who contributes heavily in terms of progressing and playmaking for his side. He also does extremely well in terms of contributing to the defensive part. Like Westerlund, if he can improve his ability to create clear cut chances for his side and play a lot more shot-assists, he could be a more complete player.

The Mjøndalen right-back featured more in the attacking metrics and especially ranked well when it came to chance creation where he had very good attacking output. He also contributes for his team in terms of playmaking where he managed to play a lot of smart passes and break lines for his side. His defensive contributions for his team is also decent but he can definitely improve that as well.

The OBOS-ligaen possesses some fine full-backs with most of them being young and with high potential. In this article, we have covered both the attacking as well as the defensive traits to discuss and list a few of the best performing players. A lot of players have been handpicked and have seen themselves playing in multiple top-tier clubs across the Scandinavian regions. We could see that the players we saw and discussed could also follow the same path and be successful at the top level.