In this data analysis piece, we will be looking out for the best central midfielders currently playing in OBOS-ligaen using statistics.

In our analysis, we will be considering both the attacking as well as defensive attributes. Definitely passing is the most important trait for a midfielder so that won’t be missed for sure. We will be looking at players who have registered at least 900 minutes of football in the 2021 league season. Also, only proper central midfielders are taken into consideration i.e. no makeshift options included.

The most important thing for any player or position in football is probably to identify their best-suited abilities. Different players playing in the same position will have different abilities both offensively and defensively. Likewise, a central midfielder will show both defensive as well as offensive capabilities. In order to account for the profile of the CMs that we are looking into we compare them with respect to how well they perform their attacking and defensive actions. We can see the plot in the image below that compares the CMs in the OBOS-ligaen with this regard. 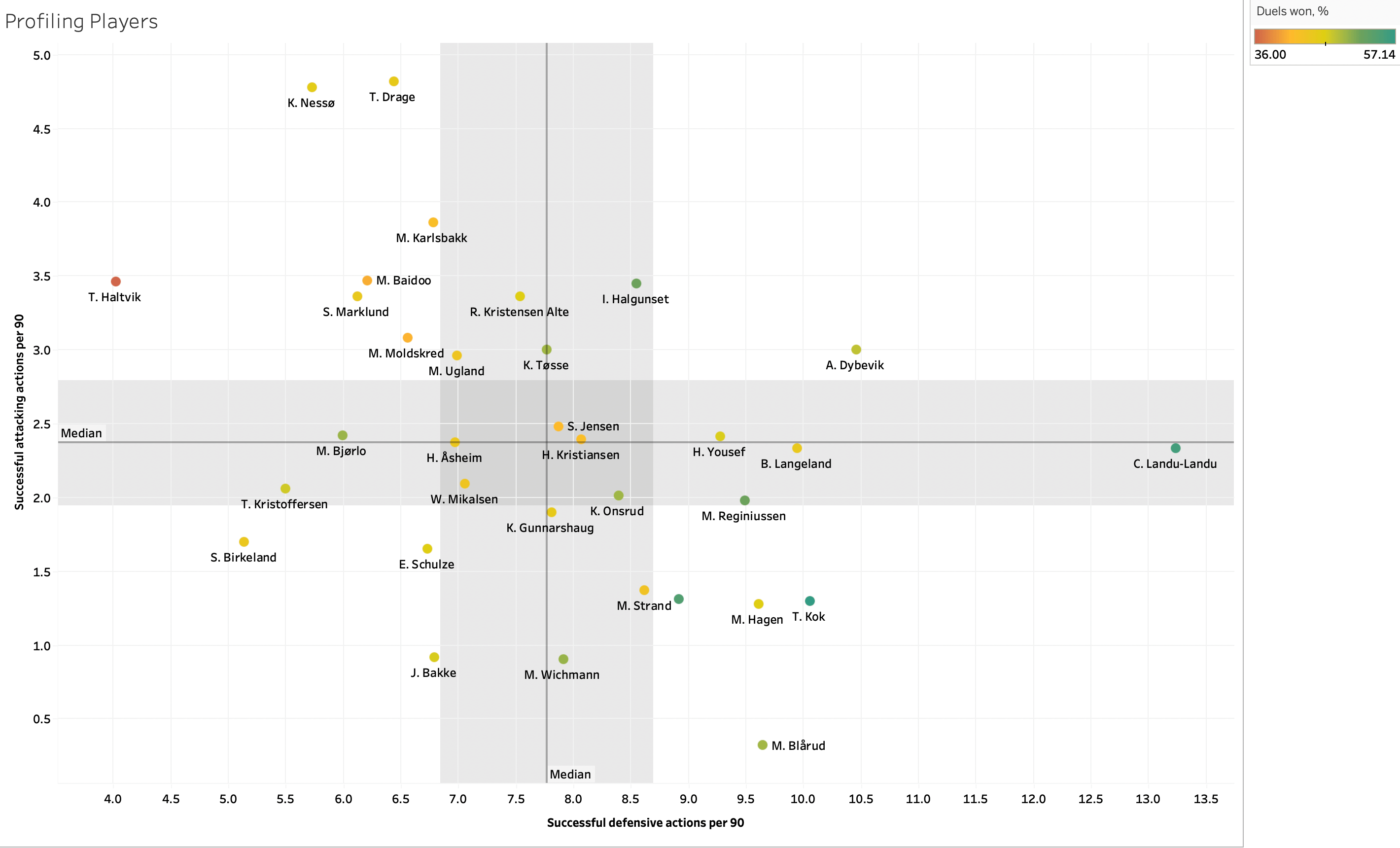 From the chart, we can see that the players are clustered based on their profile with some of the players doing extremely well in the attacking sense while some of them are good defensively and are just above average offensively.

Andreas Dybevik – The 23-year old central midfielder from Bryne FK. The former Sandnes Ulf academy product has averaged 3 successful attacking actions per game and 10.46 successful defensive actions per game. Along with that, he has also averaged or won duels at the rate of 48% which is decent.

Christian Landu-Landu – The 29-year old midfielder from Sandness Ulf has a more defensive profile associated with him where he has recorded 2.33 successful attacking actions per game and 13.24 successful defensive actions per game. He has also won his duels at the rate of  55.86%.

The next thing we look at is how the players perform in the defensive aspect of the game. We compare the players with respect to their defensive duels and interceptions stats that they have recorded per game over the course of this season. 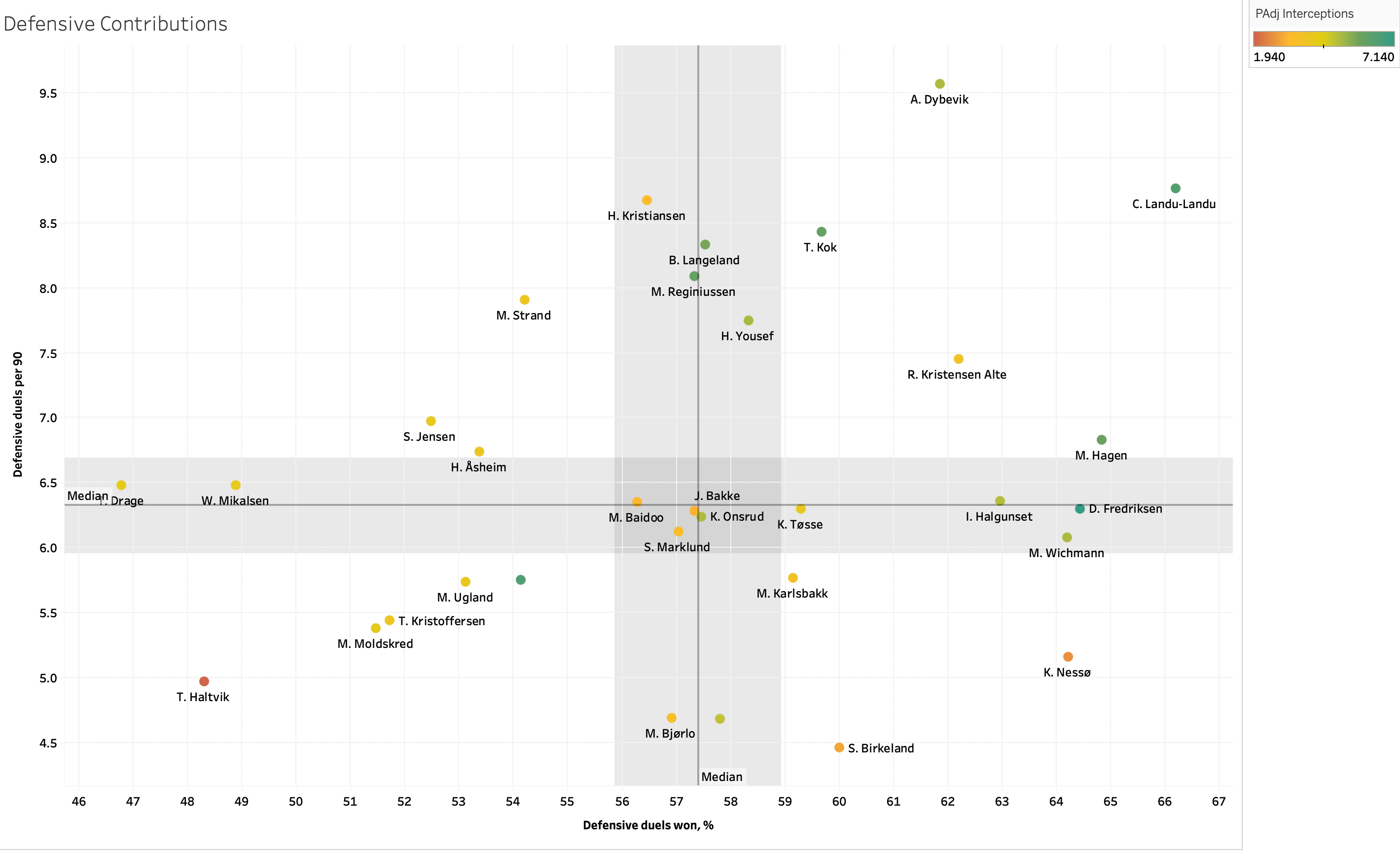 Christian Landu-Landu – The Sandness midfielder has averaged 8.76 defensive duels per game and has won 66.1% of them successfully. He is also a very intelligent player off the ball and has made 6.45 PAdj interceptions per game.

Ruben Kristensen Alte – The 21-year old youngster from Ranheim. He has averaged 7.45 defensive duels per game and has won 62.2% of them. He has also averaged 3.77 PAdj interceptions per game.

Thomas Kok – The 23-year old Dutchman who recently played for Jerv and has been a free agent recorded 8.43 defensive duels per game and has won 59.67% of them. He has also recorded almost 6 PAdj interceptions per game.

Andreas Dybevik – The Bryne FK man has averaged 9.57 defensive duels per game and has also won 61.86% of them. He has also recorded 5.11 PAdj interceptions per game which is quite average with respect to the other CMs in the league.

Marius Hagen – The 29-year old midfielder from Strommen IF (who are now in the 3rd tier after relegation). He has recorded 6.83 duels per game with a success rate of 64.84%. He also records 5.91 PAdj interceptions per game. 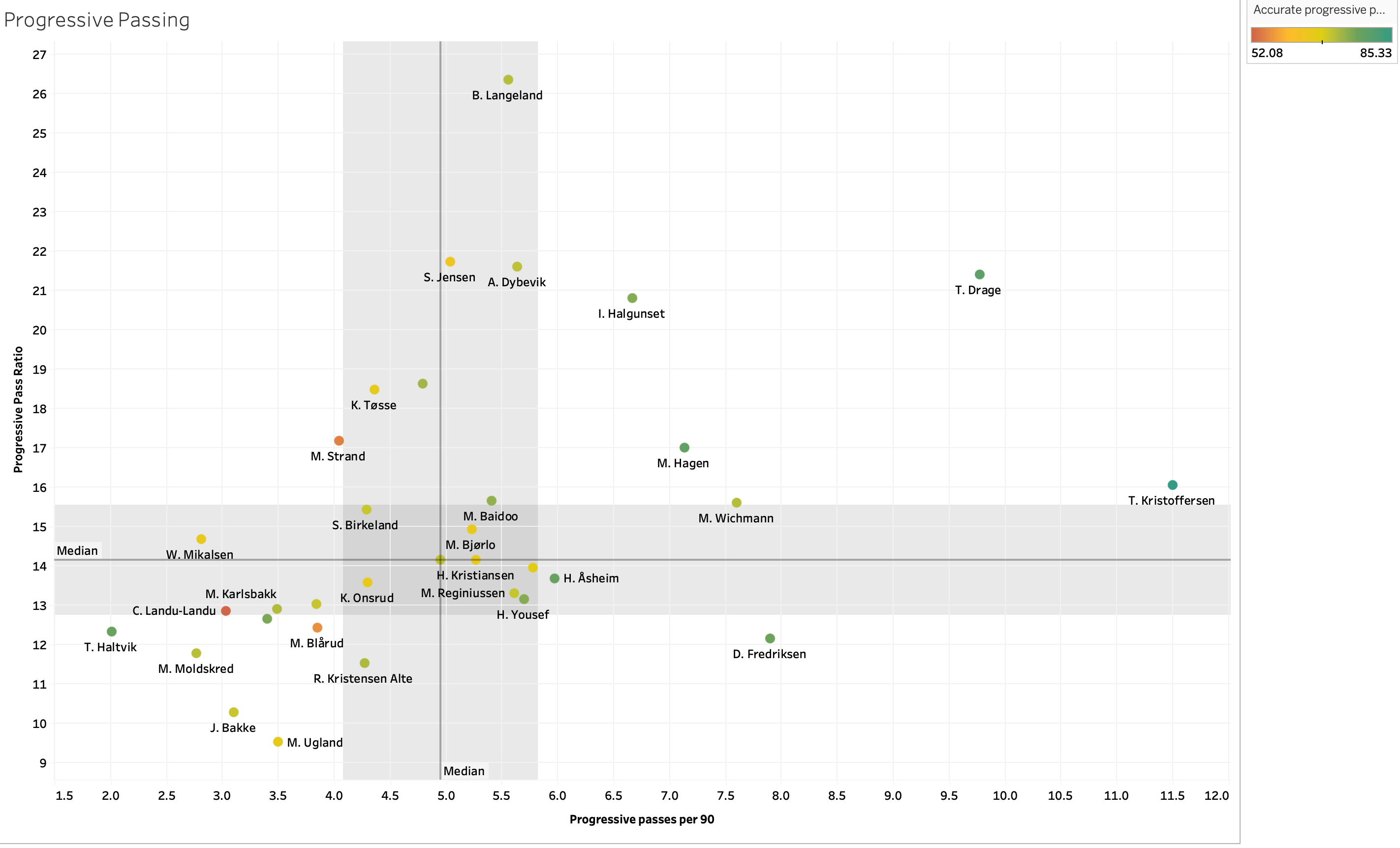 The players performing in very top regard in this category are:-

Thomas Drage – The experienced Fredrikstad midfielder has averaged 9.77 progressive passes per game with a ratio of 21.4 which is a good value where almost 21% of his passes were progressive in nature. He also has an accuracy of 79.5% in completing those progressive passes.

Tomas Kristoffersen – The 28-year old midfielder from Asane. He records 11.05 progressive passes per game and completes them at the rate of 85.33%. Almost, 16% of his passes are progressive in nature.

Ingvald Halgunset – The Sandness midfielder has recorded 6.67 progressive passes per game with an accuracy of 75.29%. He averages almost 21% with respect to the progressive pass ratio which is a great measure and shows his intention to play direct when he gets the ball. 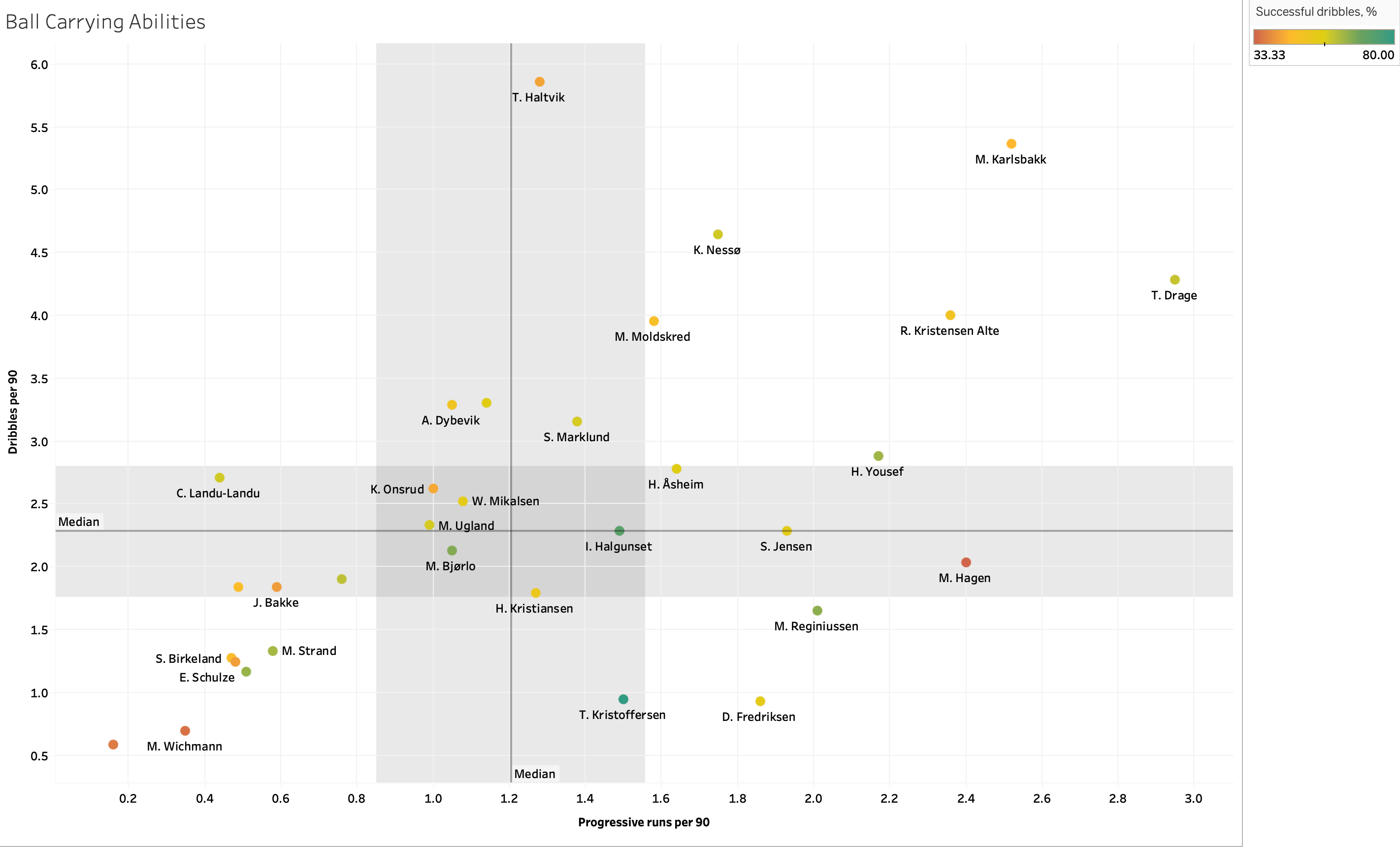 Thomas Drage – Drage has recorded 4.28 dribbles per game and 2.95 progressive runs per game. He also completes his dribbles at the rate of 59.2%.

Markus Karlsbakk – The 21-year old youngster from Raufoss, who recently made a loan switch to Aalesund. He records 5.3 dribbles per game with an accuracy of 44.7%. He also makes 2.52 progressive runs per game.

Ruben Kristensen Alte – The youngster from Ranheim has done very well in terms of carrying the ball. He has recorded 4 dribbles per game with an accuracy of 50% which is a good measure too. He also averages 2.36 progressive runs per game.

Kristoffer Nessø – The 28-year old Norweigan from Sogndal. He has recorded 4.64 dribbles per game with an accuracy of 58.16%. He also averages around 1.75 progressive runs with the ball.

Hassan Yousef – The 25-year old central midfielder from Grorud has recorded 2.88 dribbles per game with a success rate of almost 63%. Along with that, he had recorded 2.17 progressive runs per game which tell that he is pretty good at carrying the ball into spaces.

CMs are also tasked with moving the ball to the final third and helping the team to ensure that they can go to the final phase of the play. 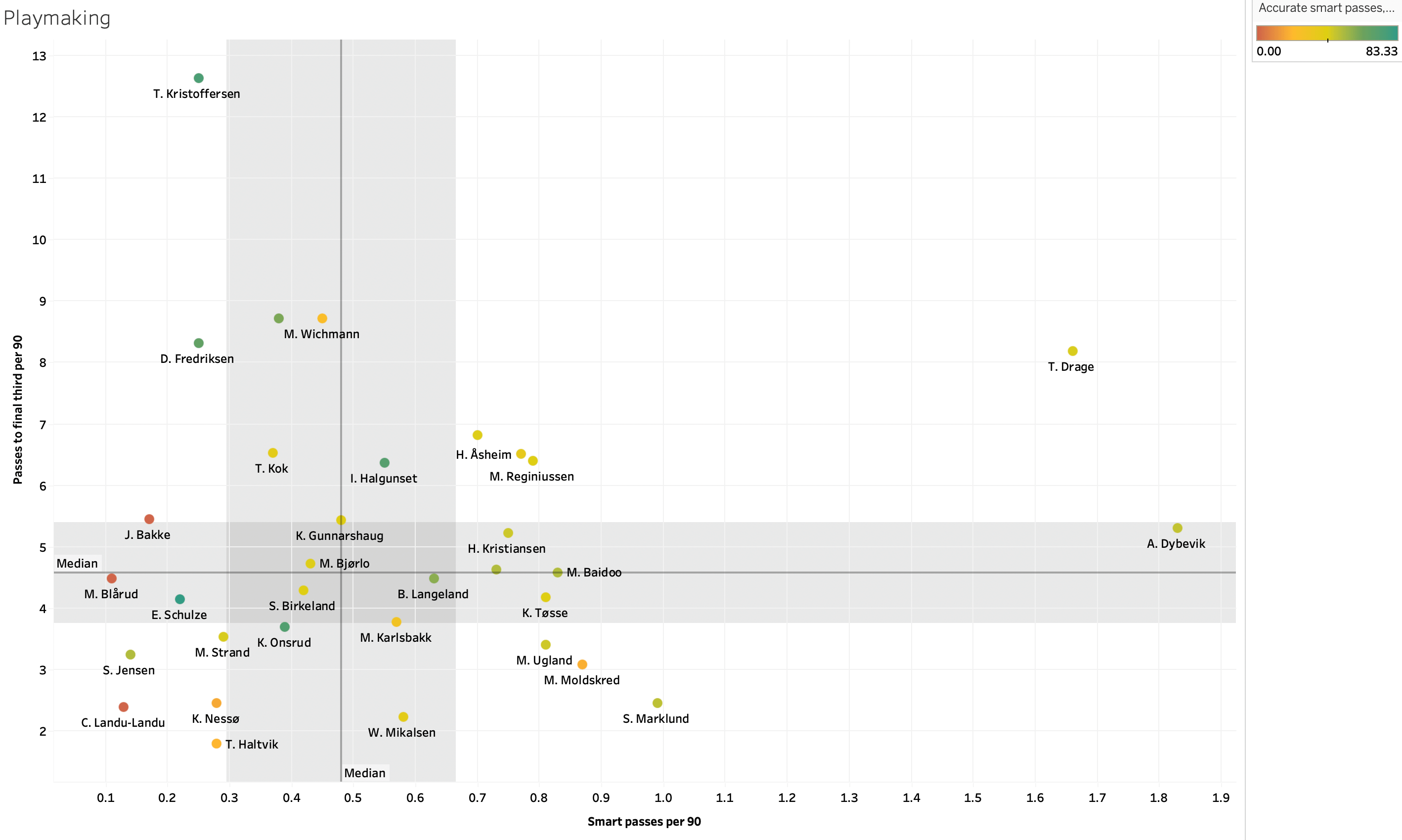 Thomas Drage – Drage has recorded 1.66 smart passes per game with an accuracy of 42.5% which is an average measure but given that he attempts a lot of smart passes when compared to the other central midfielders playing the OBOS-ligaen. He also made 8.19 passes into the final third.

Andreas Dybevik – The Bryne midfielder has averaged 1.83 smart passes per game, which is the highest among the CMs in the league last season, along with an accuracy of 46.67%. He also records 5.1 passes into the final third, which might be slightly low compared to the other top performers but still plays a major part in his team’s progression.

Mads Reginiussen – The 34-year old veteran from Ranheim. He has recorded 0.79 smart passes per game with an accuracy of 41%. He has also made 6.4 passes into the final third which shows that he is much more involved in moving the ball into the final third.

Havard Asheim – The 26-year old CM from Fredrikstad. He usually plays in the CM position but has also played as a DM and also as a right-back. He has played 0.77 smart passes per game with an accuracy of 35.29%. He is more of moving the ball into the final third rather than playing line-breaking passes, where he has recorded 6.51 passes into the final third last season.

The final phase of play and potentially the most crucial aspect from an attacking sense is the creation of chances for their team’s forwards. This is where a lot of CMs, especially the attacking ones are judged based on their ability to consistently create chances. 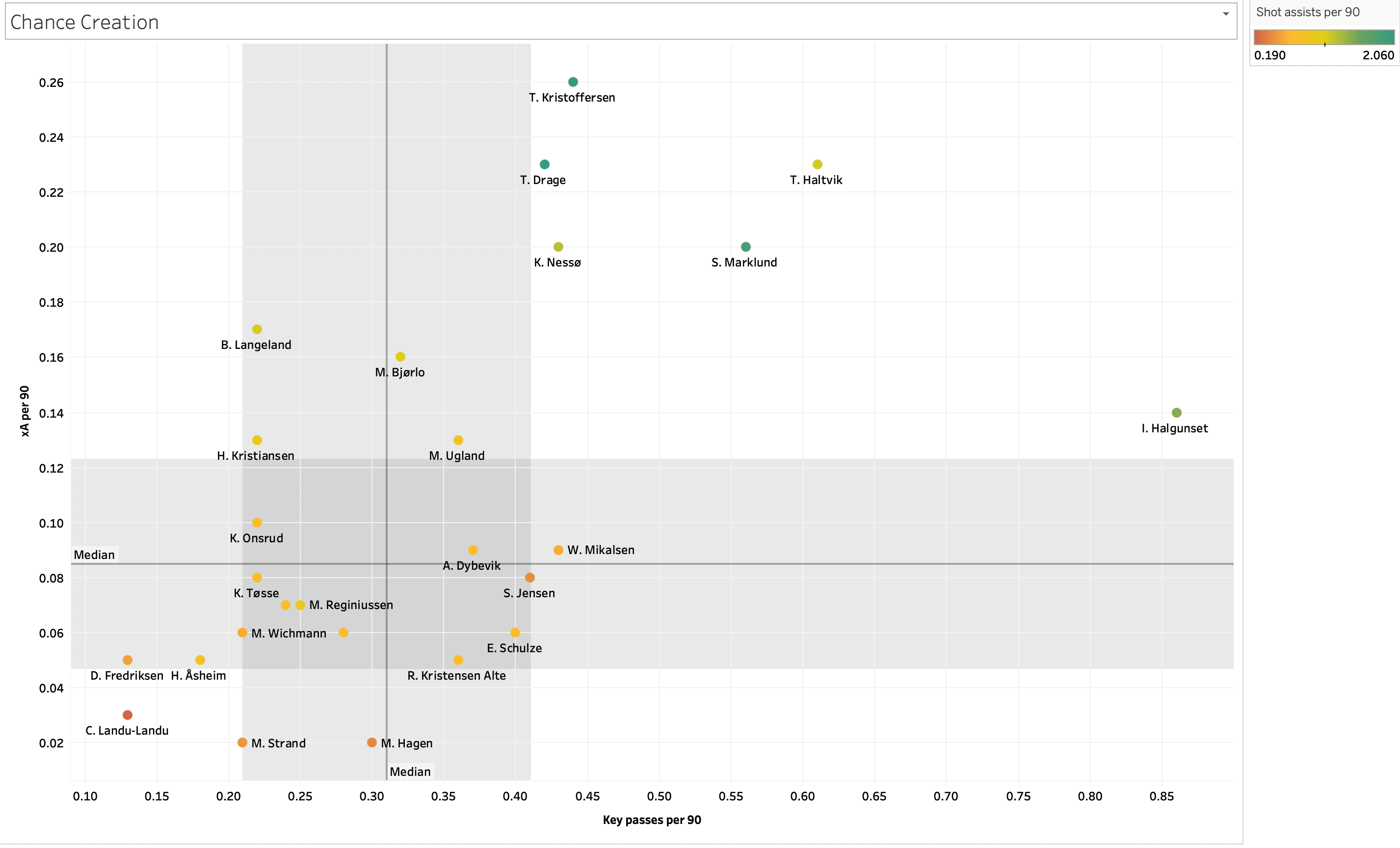 Teodor Haltvik – The 21-year old central midfielder for Raufoss. He has recorded 0.61 key passes per game with an xA of 0.23 per game. He had also averaged 1.17 shot assists per game.

Simon Marklund – The 22-year old midfielder from Ranheim who plays as an attacking midfielder for them and has also played as a wide midfielder. He recorded 0.56 key passes per game along with an xA of 0.2 per game. He averaged a mammoth 1.9 shot-assists per game in the league.

Tomas Kristoffersen – The Asane midfielder had recorded 0.44 key passes per game but his xA was worth 0.26 per game. He had also averaged 2 shot assists per game last season.

Thomas Drage – Drage averaged 0.42 key passes per game with his passes being worth 0.23 xA on average per game. He had also recorded 2.04 shot assists per game in the league.

Ingvald Halgunset – The Sandness midfielder recorded 0.86 key passes per game with an xA of 0.14 per game. Along with that he had also recorded 1.49 shot assists per game last season.

Kristoffer Nessø – The Sogndal midfielder recorded 0.43 key passes per game last season with an xA of 0.2 per game. Going with that he also averaged 1.28 shot-assists per game.

The Bryne FK youngster seems to be excelling in the defensive areas in terms of interceptions and engaging in duels which can be seen in the above image. Along with that he also seems to be good in making attacking actions and does well relative to others in terms of the progressive passes and smart passe. He is a perfect blend of a box-to-box CM for his team and shows similarities to former Liverpool and PSG star Georginio Wijnaldum.

The Grorud midfielder has basically done well in the playmaking category and also seems to be a very good carrier of the ball where he is among the best player when it comes to making progressive runs and completing dribbles. His playmaking is his crucial attribute as he is the key man for his team’s progression to the final third.

The Sandness youngster has generally done well in the attacking areas especially with respect to chance creation where he records a lot of key passes and has a good measure for shot-assists per game. He is not too involved in defensive phases but still has decent interceptions measure compared to the other players. He is also very good at progressing the ball with both runs as well passes.

The Raufoss youngster appeared just once in the article, in the Ball Carrying section, which tells us where he particularly excels. He is very good with carrying the ball into open spaces as well as beating his man with his skills. We could expect him to make a further jump in other categories next season and develop into a much all-round player.

In this piece, in the form of data analysis, we saw some of the best performing CMs from the 2021 OBOS-ligaen and are currently geared to impress even more in the next season. We also saw some important talents to watch out for in the league who could very well impress and soon be brought by Scandinavian giants across the Eliteserien, Superliga and Allsvenskan.