Diogo Jota arrived at Anfield last summer from fellow Premier League club Wolves for £45 million. Jota’s career is an interesting one, he started off at Pacos De Ferreira where he was impressive and subsequently got a move to Atletico Madrid where he never made an appearance but had two loan moves, firstly with Porto and then Wolves where he later made his deal permanent.

His move to Merseyside came as a bit of a shock to Liverpool fans, with some questioning whether he was of the calibre required to play for Liverpool.  Last season Jota managed 19 appearances and nine goals in all competitions, and he slowly started to learn the Klopp system and bed himself in at Liverpool.

This season he has managed to really hit the ground running, with nine league goals in 16 appearances, in addition to a goal in the UEFA Champions League. Jota has benefited from Roberto Firmino’s injuries this season and taken the chance with both hands. Jota is the second-highest league goalscorer, just behind Mohamed Salah and Salah has taken some of the attention away from what is a brilliant season for Diogo Jota as he becomes one of the best attackers in Europe.

The Liverpool front three has been one of the best units in all of football in recent years and finding a way into it was always going to be difficult and this scout report and tactical analysis aims to unpick the reasoning behind Jota’s ability to do so.

So far this season Jota has mainly featured through the middle for Liverpool, however, he is tactically versatile and is comfortable playing anywhere in that Liverpool front three. This is shown by his heat map this season with his body of play being in two areas, centrally as a striker and as an inside forward on the left-hand side.  Liverpool also has a tendency to move Salah central and move Jota out to the left depending on the opposition. 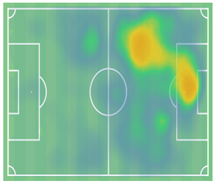 Despite him featuring across the front line, the bulk of Jota’s goal-scoring has come when he is playing through the middle as he thrives off crosses into the box, which we will look at in a moment. This is reinforced by looking at Jota’s shot map, which shows the majority of Jota’s shots and goals are taken within the width of the goal and centrally. 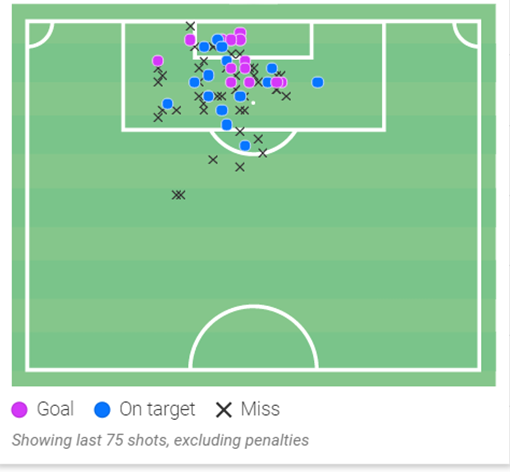 Jota has had an impressive goal-scoring start to the season with nine league goals and one in the Champions League, this is from an XG of 8.03, which is the 3rd highest in the league behind Salah and Mane. This is in addition to having the 2nd highest Expected goals + expected assists of 10.15 and the highest XG + XA  per 90 this season.

As you can see from the above shot map of Diogo Jota, he takes the majority of his shots in the central area between the goalposts, which is something all good strikers tend to do. The majority of these chances and shots come from crosses or pullbacks. With Trent Alexander-Arnold and Andy Robertson in the team and with the way Liverpool play crosses in the box are going to be aplenty and Jota’s movement and ability to attack these had played a significant role in his goal-scoring this season. The first example of Jota ability to score crosses came is against Atletico Madrid in the Champions League, Salah is on the ball on the right-hand side and Henderson is making an overlapping run, while Jota is in the box anticipating the cross.

As the ball is played to Henderson he checks back and plays the ball to Trent Alexander-Arnold. At this point in the box, you can see Jota just check his shoulder, this is a key in this as Jota then drops slightly into a small pocket of space between Trippier and Felipe.

As the cross comes in Jota maintains this pocket of space and is ready to attack the cross as it comes. With the ability of Alexander-Arnold Jota doesn’t need to be in a big pocket of space due to his crossing ability.

Jota times his run well and nods home from the edge of the six-yard box. Although the cross is excellent, the ability to find the little pocket of space and combination of the well-timed run makes this goal.

This isn’t the only time Jota has scored off a cross. He has the ability to score with both his head and feet, but the next example is another example of him scoring with his head. This time early in the season against Brentford.  Liverpool has turned the ball over and is on the counterattack. Salah has the ball on the right-hand side, you can see Jota making a run into the space between the right-sided Centre back and the wingback who is out of position

As Salah plays the ball to Henderson who has made an underlapping run for Salah. Jota finds himself in that pocket of space again, as shown below.

As the ball comes in from Henderson, he places it brilliantly in the space for Jota who rises and heads home to give Liverpool the equalizer.

The cross is again brilliant, but the ability for Jota to find that pocket is the key, and the finish is also very impressive.  Both examples hopefully show the intelligence from Jota to identify the space within the defensive line and then execute well-timed runs and finishes.

The central striker in the Liverpool front three has been Roberto Firmino for many years. He was often referred to as a false 9 as he would often drop into a deeper pocket to help in the build-up but also to help facilitate runs for Salah and Mane. Although Jota does this slightly differently, he does still drop off and display effective hold-up. This motion of dropping deeper to get on the ball is shown perfectly against Jota’s former club Wolves. Wolves are sat deep with two mid-low blocks. Jota drops in between the two blocks into a position you would associate with a number 10, Now Jota has an abundance of space to work with as Matip plays a ball between the lines.

As Jota receives the ball and turns he has a few passing options, both Salah and Mane have made runs from outside to in but at the top of the diagram you can see Robertson who has held his width who too provides a passing option for Jota.

Jota takes another touch then plays a well-weighted pass to Robertson who gets into the highlighted space and plays a ball across the face which forces Saiss into an exceptional challenge to deny Liverpool a goal.

This is a perfect example to analyse some of Liverpool tactics in their attacking play, the use of Jota dropping off the run from the inside forwards and the high fullbacks. It also emphasizes the importance of Jota dropping into that pocket to get on the ball but also to draw attention to him and allow the runs inside.

This point links into the one above, with good hold up play, comes good link-up play. To play in this Liverpool front three, you must be able to link up and supply the likes of Mane and Salah. This is something Jota has been able to effectively do this season. This is something we have seen in the previous example but on that occasion, Jota linked up with Robertson. The next example comes from Liverpool’s game Vs Arsenal. The move starts with Alisson playing a diagonal ball out to Tsimikas who heads the ball towards Jota. Jota drops into the highlighted space between the two Arsenal blocks.

As he makes this run it drags Gabriel out to mark him, this then leaves a space for Liverpool to exploit. They manage to do this through an excellent header from Jota who manages to flick it into the space highlighted.

Mane manages to beat Ben White to the ball and carry it into the box before squaring it to Salah who taps home to score one of the team goals of the season. This shows a combination of the dropping off to facilitate runs from Mane and Salah as it creates space within the defensive line for them to execute but also the intelligence and quality of Jota to execute such a difficult header perfectly.

This analysis should show Jota has become an integral cog in the Liverpool machine this season, not just for his goalscoring but also his contribution in the buildup phases as this scout report hopefully demonstrates this. Jota is becoming if not already one of Europe’s elite attackers and I expect him to play a vital role in any success Liverpool has this season but also the future of this Liverpool team as Salah, Mane and Firmino get older.