Nicolo Barella (5’8 &68kg) has had a fine start to the season the Serie A for Inter Milan, leading the league in assists and has played a key role in Inter’s good start to the season post, Antonio Conte as well Italy’s European Championship success this summer.

Barella is a 24-year-old Italian midfielder who started his career at Cagliari before his move to Inter in 2019, since then he has developed into one of the best midfielders in Europe and has lived up to that tag this season. With Inter looking to generate revenue Barella has been rumoured with several moves away from the San Siro, with Liverpool being the most common link. Barella has managed five assists this season and that is currently the highest tally in Serie A in addition to this Barella has created nine goal scoring actions this season (according to Fbref) which too is the highest in Serie A.

This tactical analysis and scout report sets out to analyse look at some of the key traits and attributes of Barella’s game and look at how these have impacted his impressive start to the season.

Barella is a right-sided midfielder, within Inter’s tactics they use a 3-5-2 formation which was used by both Conte and Inzaghi Barella will occupy the right side of the midfield 3. This can be supported by looking at Barella’s heat map which is shown below. With the majority of his positioning being the wide right channel. The role Barella takes up is what the Italians referred to as a Mezzalla, in Italian this term means half, wing and is used to refer to midfielders who occupy those wide central areas. This is demonstrated brilliantly by Barella’s heat showing most of his positing is in those wide areas on the right-hand side. Playing in this role allows Barella to maximise some of the strongest attributes which we will touch on later in the analysis. 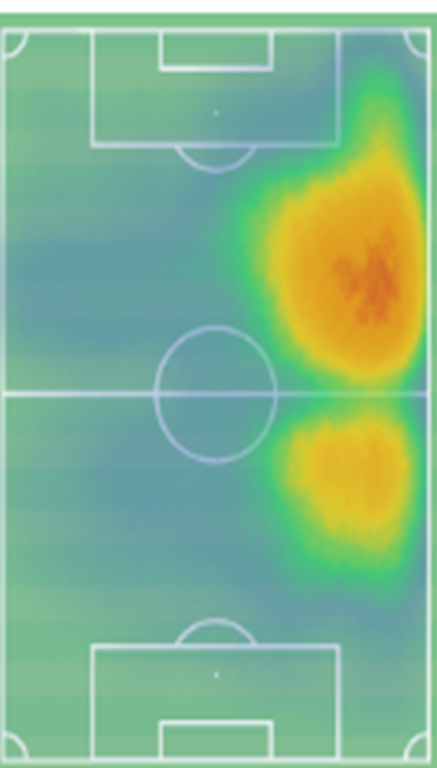 Here we have an analysis of one of Barella key attributes. playing in those wide central channels means Barella has many an opportunity to cross the ball to his attackers and with Inter playing two central strikers in the form of Martinez and Dzeko it means Barella has two aerial presences to work with. Barella loves to pick the ball up in wide space of the oppositions half and play a beautifully whipped right-footed cross which we look at now. In the following example, Inter are on the counterattack and Darmian is carrying the ball forward, Barella has made an overlapping run into the space that you would associate with a mezalla. You can also see Dzeko and Martinez making runs towards the box.

Darmian has now played the ball to Barella who is about to have a touch then set himself ready to deliver the ball into the marked space in the box for Martinez to attack.

Barella delivers the ball beautifully for Martinez who fires the ball into the back of the net to give Inter a 1-0 lead over Atalanta. This run, area and cross is something fans of the Premier League may associate with Kevin De Bruyne. 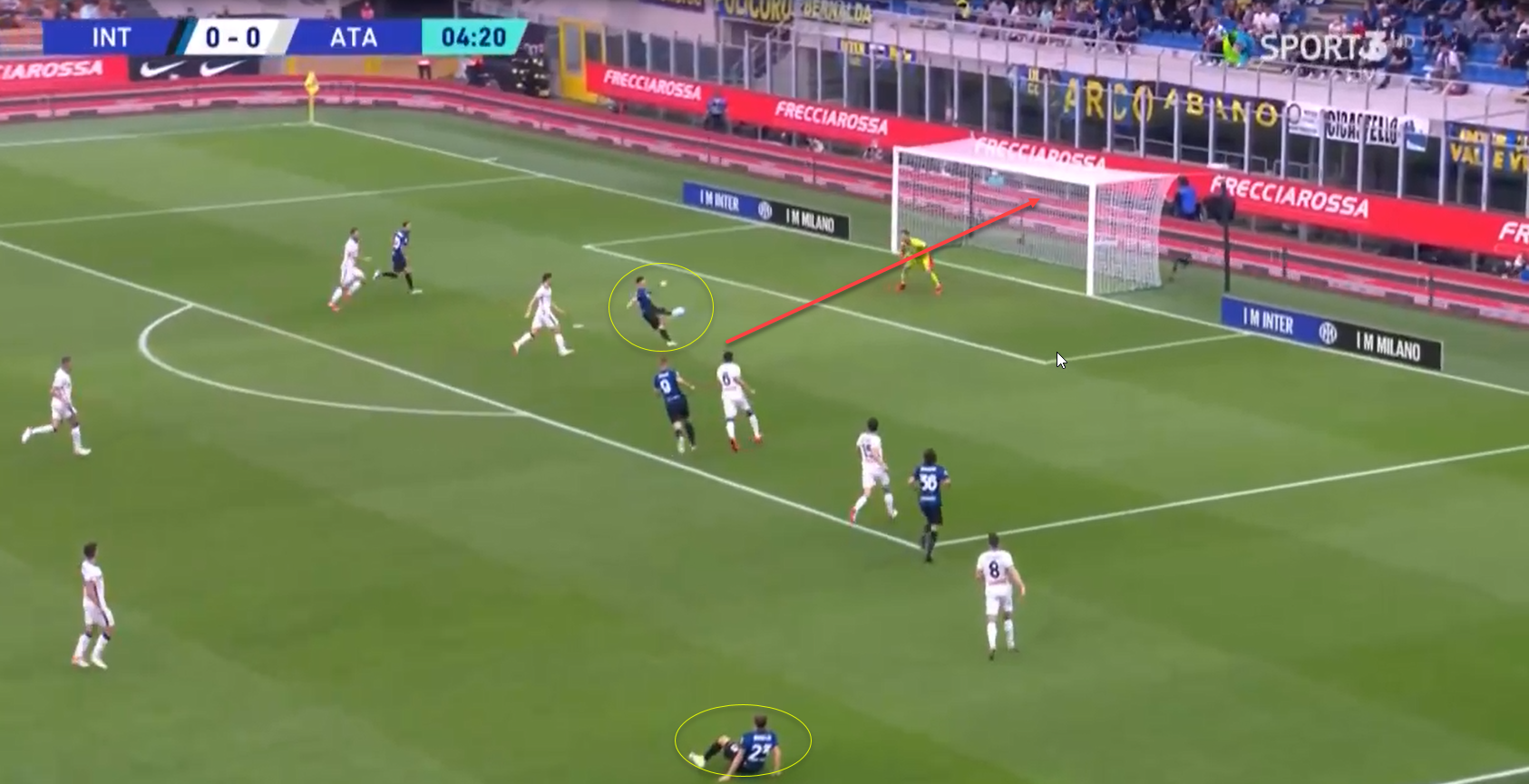 In the next example, we see Barella make another brilliant cross utilising the wide spaces. This example is from Inter’s Serie A game against Empoli, again we see Barella making the run into the wide spaces and ready to receive a pass from Matteo Darmian, this space is often free for Barella as Inter play with a 3-5-2 it means he can go and occupy that space where if they played with another formation this space may be occupied more often.

Barella receives the ball and starts carrying the ball towards the goal, another feature of Barella’s game we will touch on later. He manages to carry the ball all the way to the byline using his speed where he then plays a brilliant, clipped cross to Martinez. Who’s powered header forces a brilliant save from the keeper. 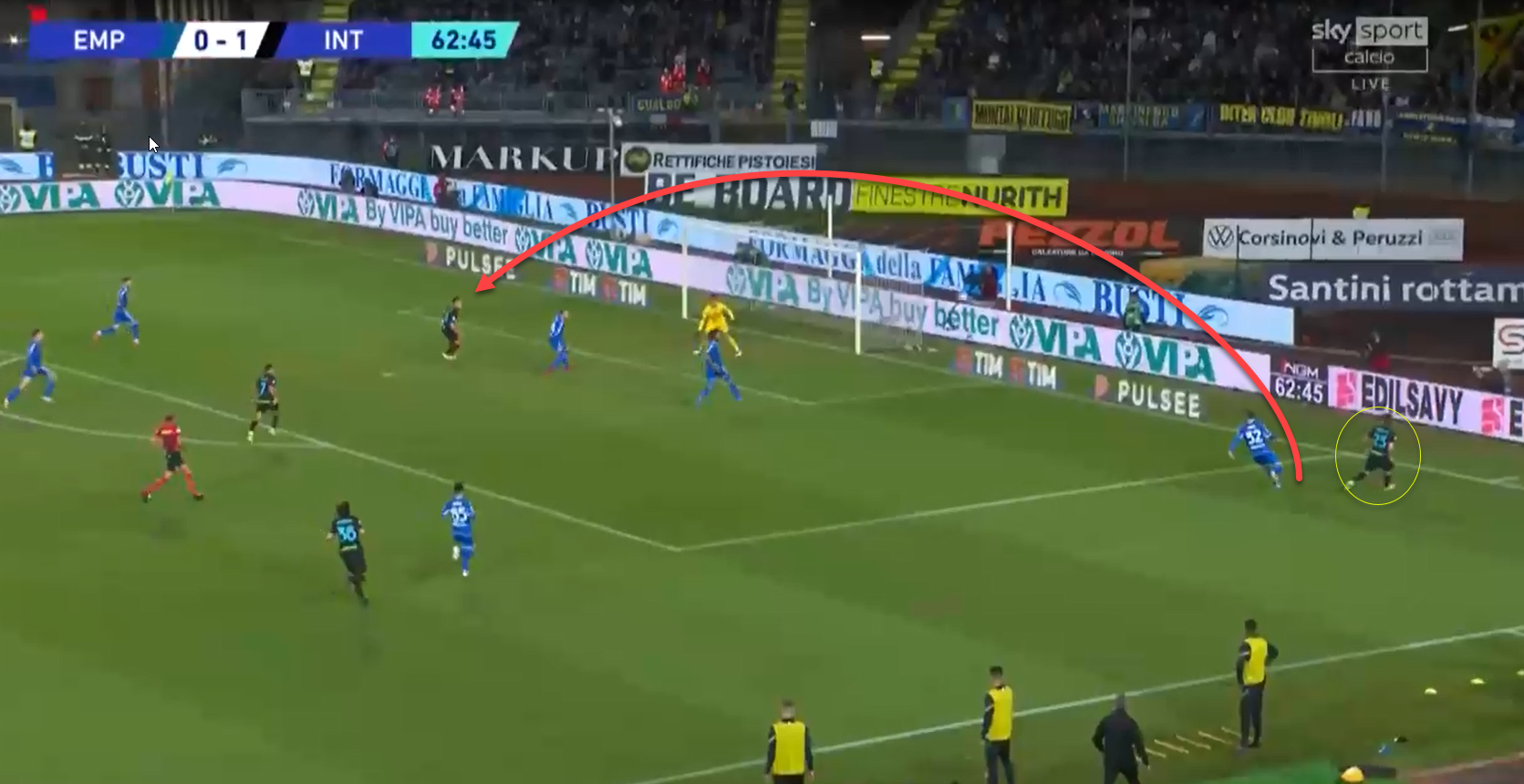 Both these examples show how Barella likes to use the wide space to provide crosses for his two strikers. The crosses occur in two different ways, one time getting to the byline, the other from deep but this highlights the versatility in his game and ability to quickly assess the situation and play what is needed. You also cannot ignore the quality of the two crosses both played with great touch and accuracy putting them exactly where they should be.

Barella shows brilliant composure and quality when he is in the final third of the pitch and this helps us understand why he manages to get so many assists. When he finds himself in advanced positions around the box he displays composure to find his pass but also gets accuracy and touch when it is needed the most. The following example shows Barella this time in the left channel and he has currently received the ball, he has two options emerging as a way of manipulating the space shown, he has Perisic making an overlapping run and Di Marco making a run a more central run forward. He shows no panic and allows for the players to advance forward 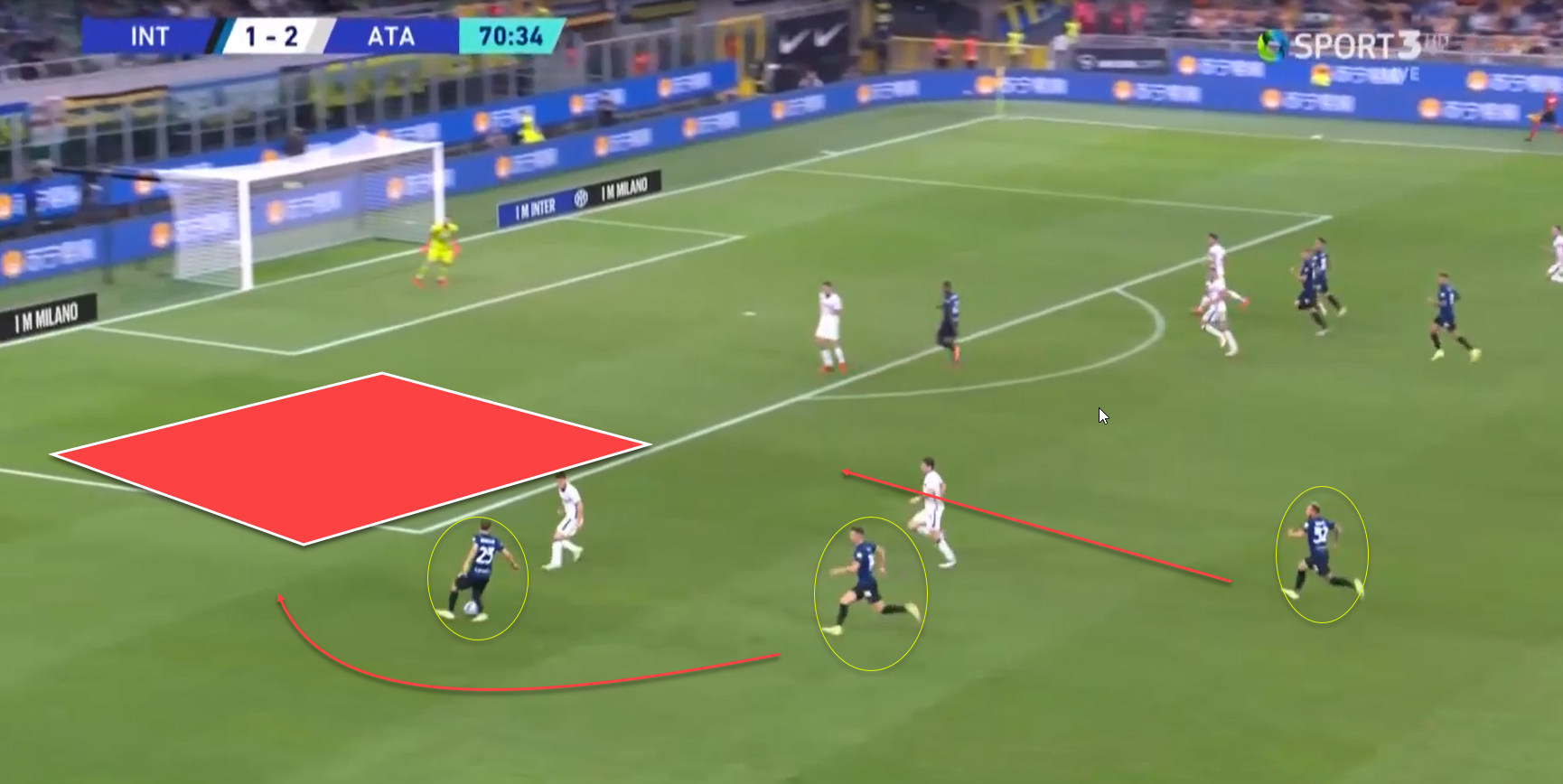 In this example the tracking defender has to pick an option either recover back and track the run of Perisic or stay central and block the pass to Di Marco, he chooses to track Perisic and that Barella with the option of playing a pass between the two defenders to the on running Di Marco. 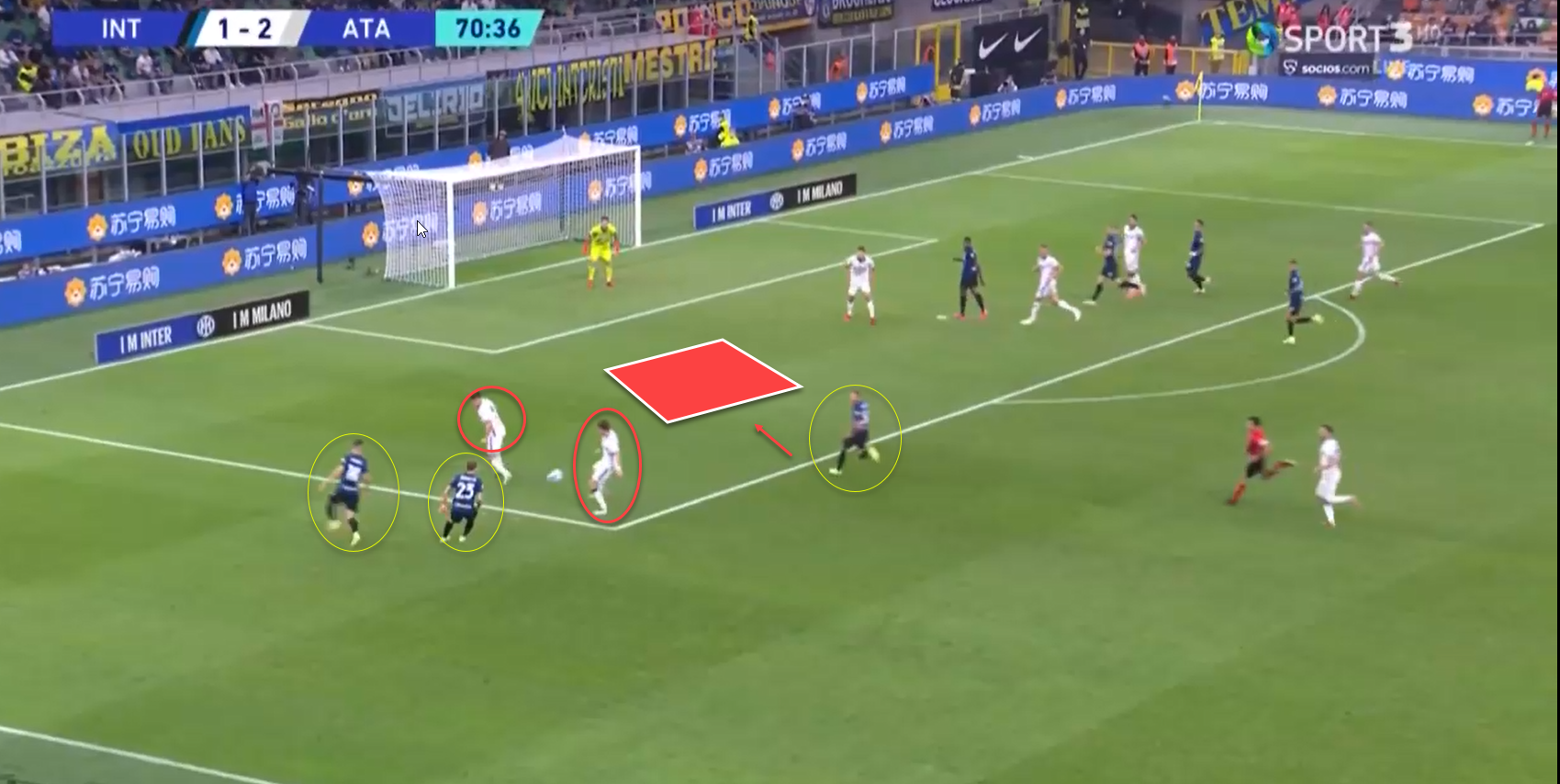 Di Marco has a shot that is saved by the keeper however Dzeko was there to convert the rebound and although this won’t go down as an assist for Barella he played a vital role in the goal. In the next example, Barella has carried the ball into the final third and has two passing options available to him in the form of Dzeko and Martinez. Again he calmly waits for the play to progress before playing the killer pass. Here he has broken past the midfielder’s challenge and progressing towards the goal, he has two options he can carry the ball infield or take it further right into the space.

He actually caries the ball relatively straight and by doing so he manages to persevere the space for his two strikers and also engage the defenders without supporting Sampdoria defenders getting back. He has engaged the right-sided centre back which means the left-sided centre back has to come across to deal with Dzeko which will leave Martinez in acres of space.

He finds Martinez with a brilliantly waited and accurate pass and he then slams home to give Inter the lead. Both these examples may seem straightforward for an elite-level football however within the heat of the moment it’s not as easy as one may think it seems and it’s what makes Barella so effective. Showing great composure and touch to make the right passes at the right times.

Until now we have focused on Barella’s attacking contributions to the team and although he does provide very effective attacking play as we have shown he is also an underrated defensive player. Barella is very good at breaking up play and distributing the position in their attacking play. This is supported by looking at Barella’s data, he has managed 1.76 interceptions this season in addition to 5.62 defensive duels per 90 with a success rate of 62%. This tells us that Barella is very active in looking to win the ball back for his team. This is also shown when watching Barella play. Barella uses his anticipation and reading of the game to make efficient and effective duels. This example shows Empoli looking to move the ball up the pitch however Barella has different ideas, he sees that the ball is going to be played into number 8 and goes to cut the ball out.

Barella again shows great understanding of the game as he doesn’t rush to cut out the passing lane, he allows the Empoli players to think it’s on and then waits to strike. The space highlighted is where he eventually intercepts the ball as you can see the leaves it vacant.

This scout report has outlined that Nicolo Barella is an extremely fascinating footballer who has a combination of footballing intelligence and excellent technique. He is an effective contributor both offensively and defensively which makes him one the best midfielders in the world despite not may be getting the headlines he deserves. If he continues his current form and Inter continue to struggle financially I don’t expect him to stay at the club long due to his quality being suitable to many of Europe’s biggest clubs. Barella is a fantastic footballer and one for the purists amongst you to follow and admire for the rest of the season and beyond.