Over the last couple of years, the Italian National team have been through some difficult times – World Cup winners in 2006, to suddenly facing a defeat in the quarter-finals of the 2016 European Championship and failing to qualify for the 2018 World Cup. It is safe to say that Italy had seen better days. Former Manchester City manager Roberto Mancini was brought in as head coach of the Italian National team in 2018 to change the fortunes of an international powerhouse, and Mancini has passed with flying colours.

Roberto Mancini took Italy’s grit and heart and used it in combination with an attacking style of play which was on full display as Italy took home gold in England’s backyard at Euro 2020. Switzerland has also been on an upwards trajectory as they have advanced into the knockout rounds in the last two tournaments, and hope to appear in the World cup in Qatar next year. The Italians stand first and the Swiss stand second in Group C with clear daylight between them and the other remaining teams in the group so, coming into this game, the top spot was up for grabs.

In this tactical analysis, I will be analysing Switzerland’s excellent defensive display and the intricacies that were involved in nullifying Italy’s attacking quality, as well as Italy’s first-half woes and How Roberto Mancini’s changes allowed Italy to improve in the second half. Lastly, I will cover Switzerland’s attacking transitions which were their main form of attack. 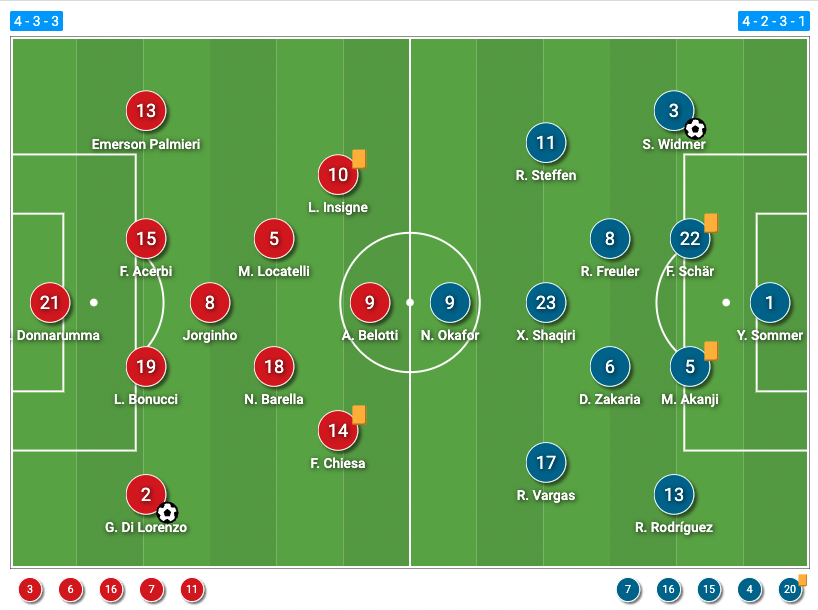 Going into this game against Italy, Switzerland had only conceded 1 goal in their previous matches in World Cup qualifying, and their strong defence was on display once again. Switzerland’ defensive organisation can be split up into two phases, the first being a 4-2-3-1 high press. Within this man-to-man scheme, Xherdan Shaqiri was tasked to man-mark Jorginho to deny him as a passing option, as he is a key cog within Italy’s build-up play structure with his ability to create connections and act as a reference point for teammates.

Switzerland’s wingers, Renato Steffen and Ruben Vargas were ordered to press outside centre-backs when Italy formed a back three. The double-pivot both pushed higher and acted as a second layer of pressure and did well to condense space within central areas and deny passes vertically. In addition, Remo Freuler was responsible for Manuel Locatelli being pressed to be effective whenever in possession. 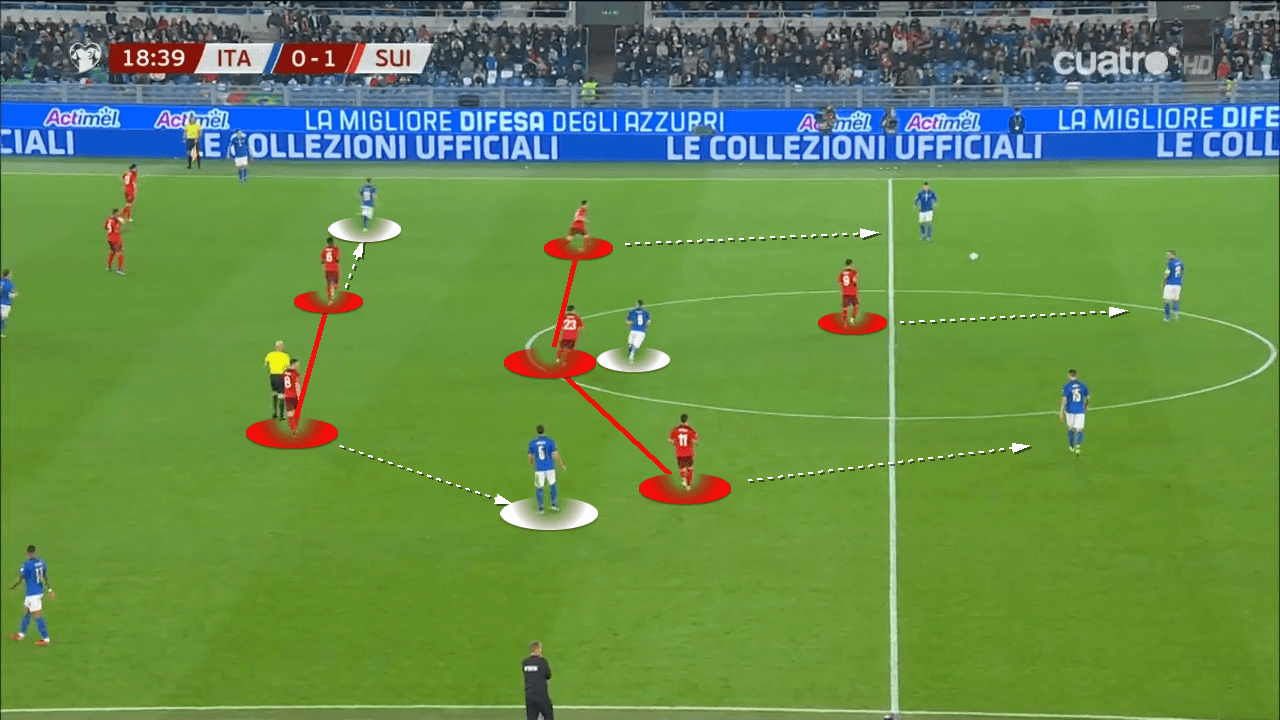 When Italy was able to find passes through and progress, the second phase of Switzerland’s defensive organisation transitioned into a 4-4-1-1 medium/lock block. Compared to the previous phase, the Swiss still applied some of the same principles; Xherdan Shaqiri was still tracking the movement of Jorginho and Remo Freuler role regarding Manuel Locatelli remained. Within this new system, Switzerland’s winger dropped into the same line of the double pivot and overall, the Swiss’ shape was narrower. 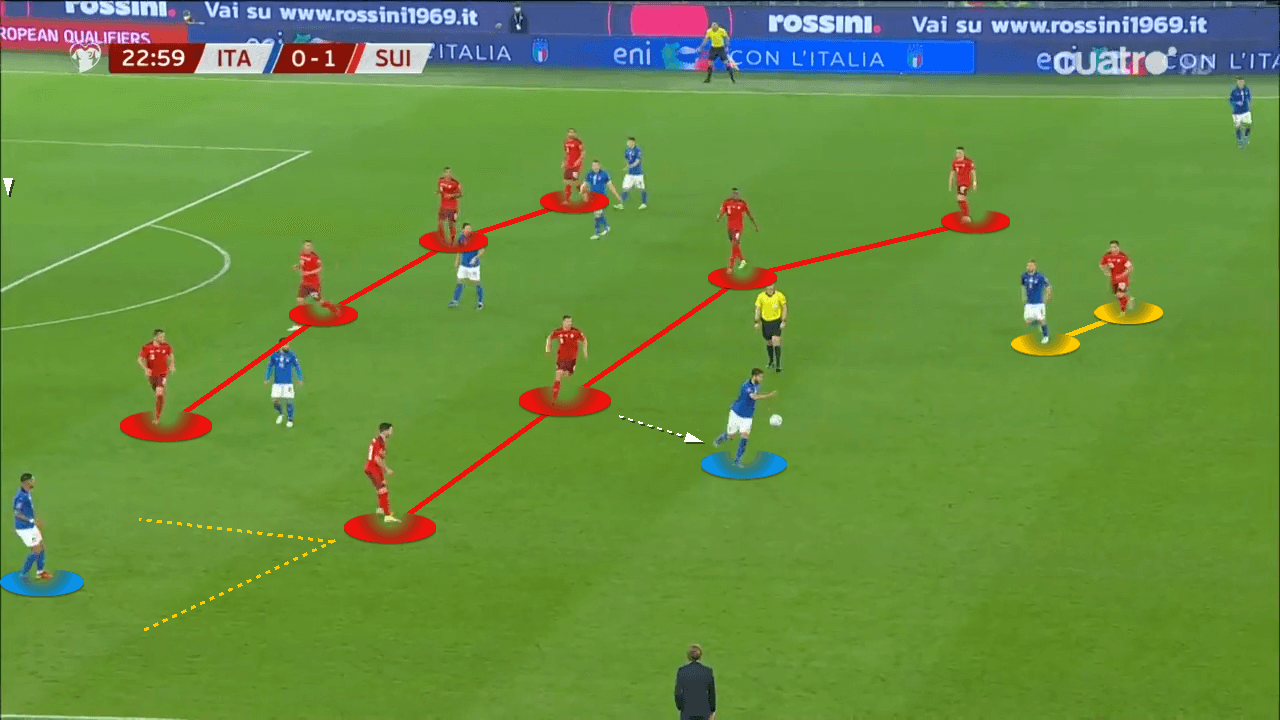 Italy has a fondness regarding playing down the left-hand side, and because of the narrow shape of Switzerland, Emerson Palmieri or Lorenzo Insigne would find himself free on the left-hand side, by the by-line, but this played right into their opponent’s hands. Switzerland excelled when trapping Italy and winning the ball back in wide areas and this was possible as they created a 3v2 overload in these regions. 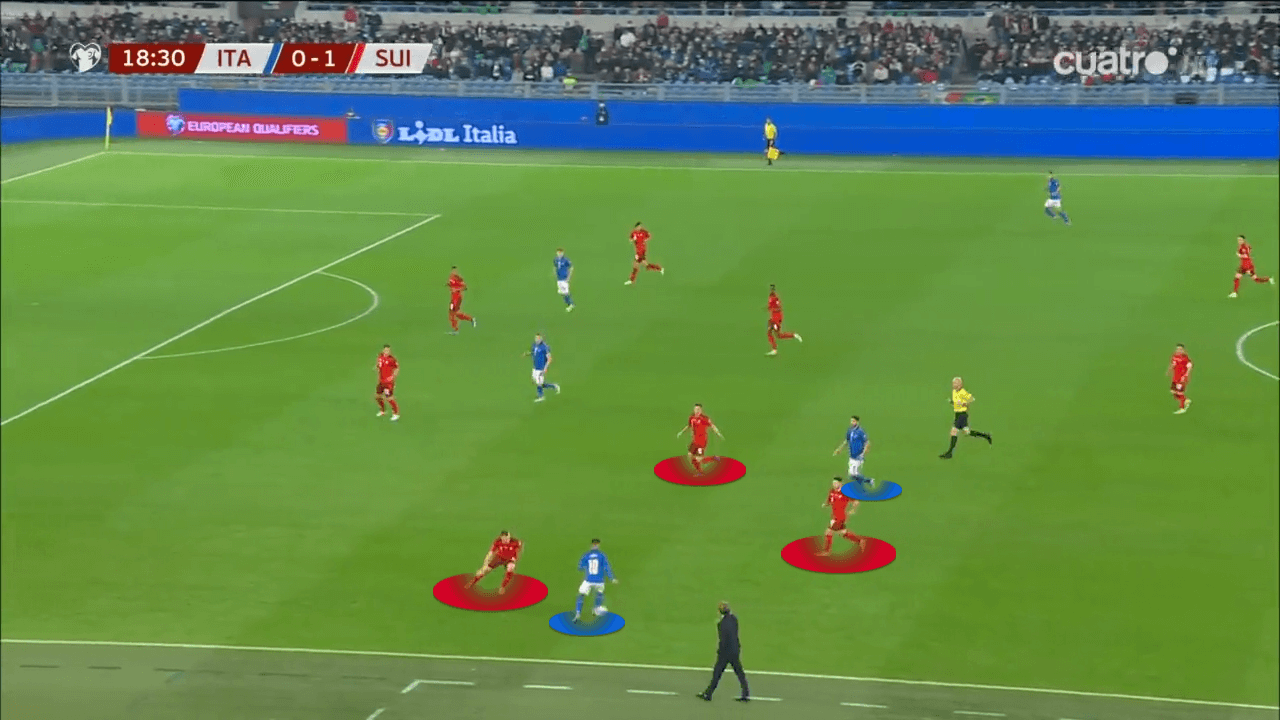 The tactics which were so successful for Italy during Euro 2020 were on show again against Switzerland. The team sheet presents Italy within a 4-3-3 formation but within the first phase of play, Italy’s system alternates. As mentioned prior, Italy forms a back three, consisting of Francesco Acerbi and Giovanni Di Lorenzo on the outside, with Leonardo Bonucci in the centre. Now making use of a three, Emerson Palmieri can now push forward and create width, which allows Lorenzo Insigne to shift slightly centrally and operate in the left half-space where he can do his best work. The Italians when building up utilised a 3-2 structure as Nicolò Barella would push higher up the field and combine with attackers in the final third. 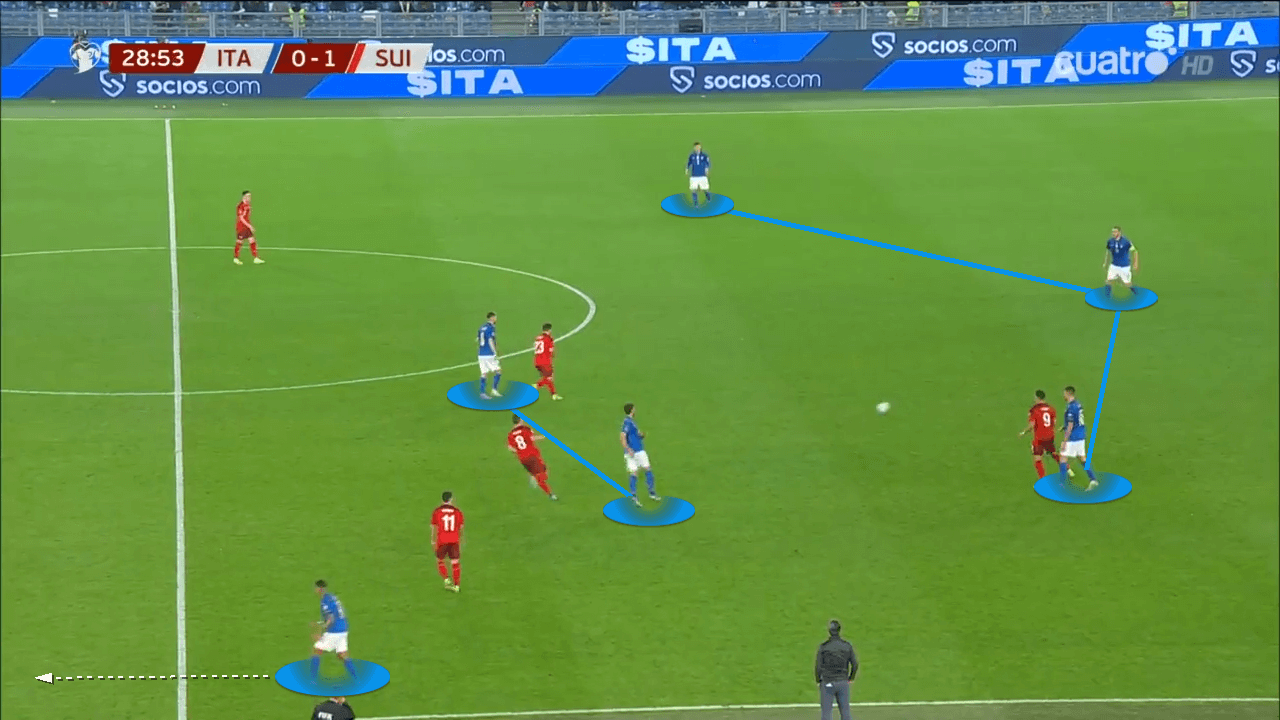 Roberto Mancini’s plan was clear to see, but his team suffered massively when attempting to move the ball from the middle third and penetrating the final third. These struggles can be viewed on many occasions throughout the first half. As previously discussed, within Switzerland’s second phase of defensive play, they set up narrowly with their main concern being attacked vertically.

When trying to enter the final third, Italy did not display any variations within their attack regarding counter-movements to stretch the Swiss defensive block. Italy showed no signs of using interplay involving short passing exchanges and creating overlaps when Insigne or Emerson found themselves outnumbered out wide.

During the first half, Italy was struggling offensively, and Roberto Mancini was aware of his team’s shortcomings. 13 minutes into the second half, Italy re-shuffled as, Andrea Belotti come off for Domenico Berardi; Lorenzo Insigne was now stationed up-front, with Berardi playing on the right and Federico Chiesa on the left. These changes massively improved Italy for numerous reasons. Andrea Belotti was quite stationary regarding his movement and did not drift into wide channels or drop-off to support teammates in possession. With Lorenzo Insigne now occupying this position, connections in attack can be made as he can drop deeper into midfield and create central overloads and openings. Insigne’s gravity was also key to creating space for others as opposing players would press him instantly.

Here we can see Lorenzo Insigne about to receive the ball from Giovanni Di Lorenzo and as this is happening, Switzerland’s midfield two Remo Freuler and Denis Zakaria both attempt to close space behind Insigne to deny him from turning and facing forward. As the Swiss midfielders are engaged with Insigne, they leave space for Sandro Tonali. Lorenzo Insigne can bounce the ball into Jorginho who sends a first-time pass into Sandro Tonali in open space. 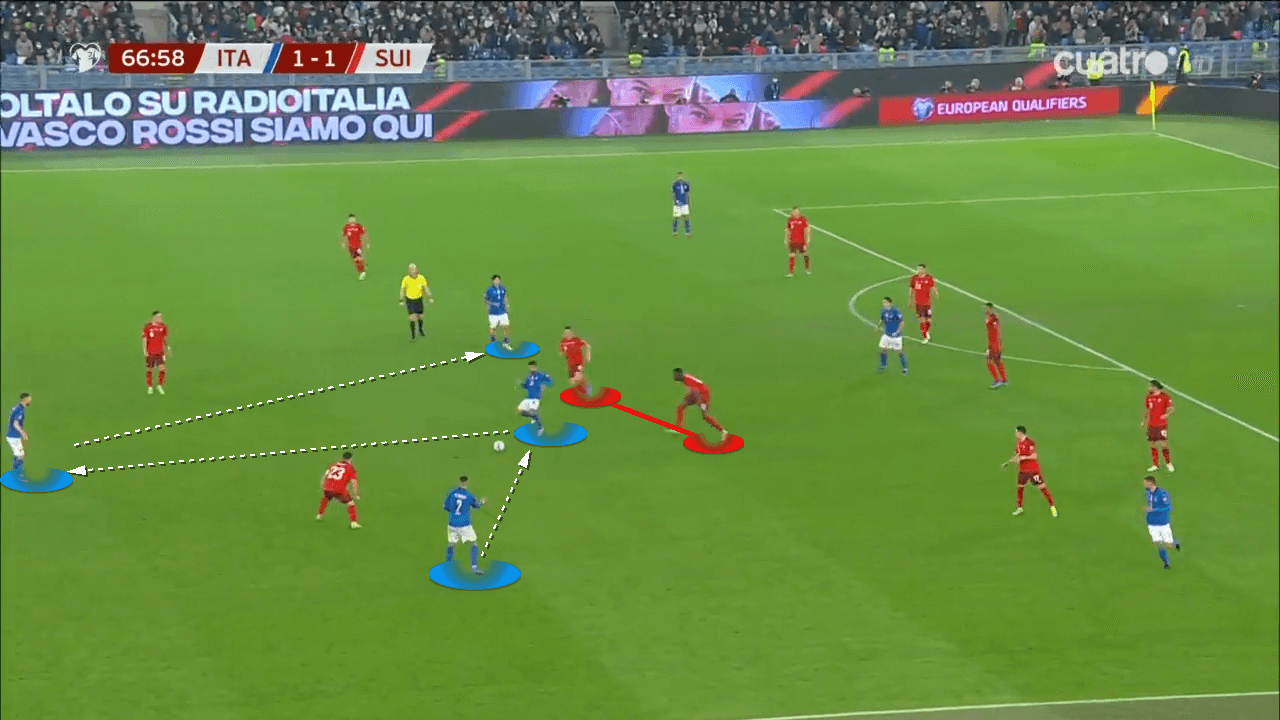 Also, with Lorenzo Insigne operating as a central focal point, Italy’s combination play took a massive turn in the right direction. In this situation, second-half substitute Bryan Cristante finds himself in the right half-space, about to receive a pass from Giovanni Di Lorenzo. 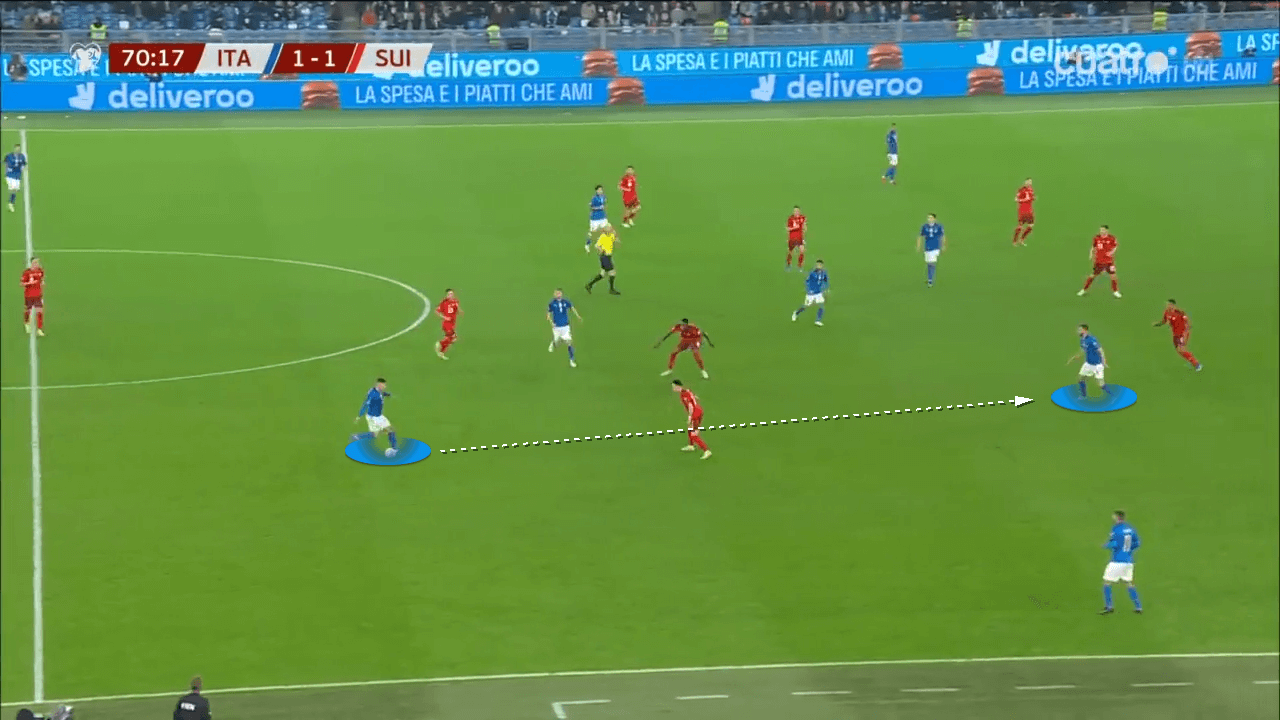 When the ball eventually reaches Cristante, he can bounce the ball to Lorenzo Insigne first time and quickly spin into the space which Manuel Akanji vacated to press. 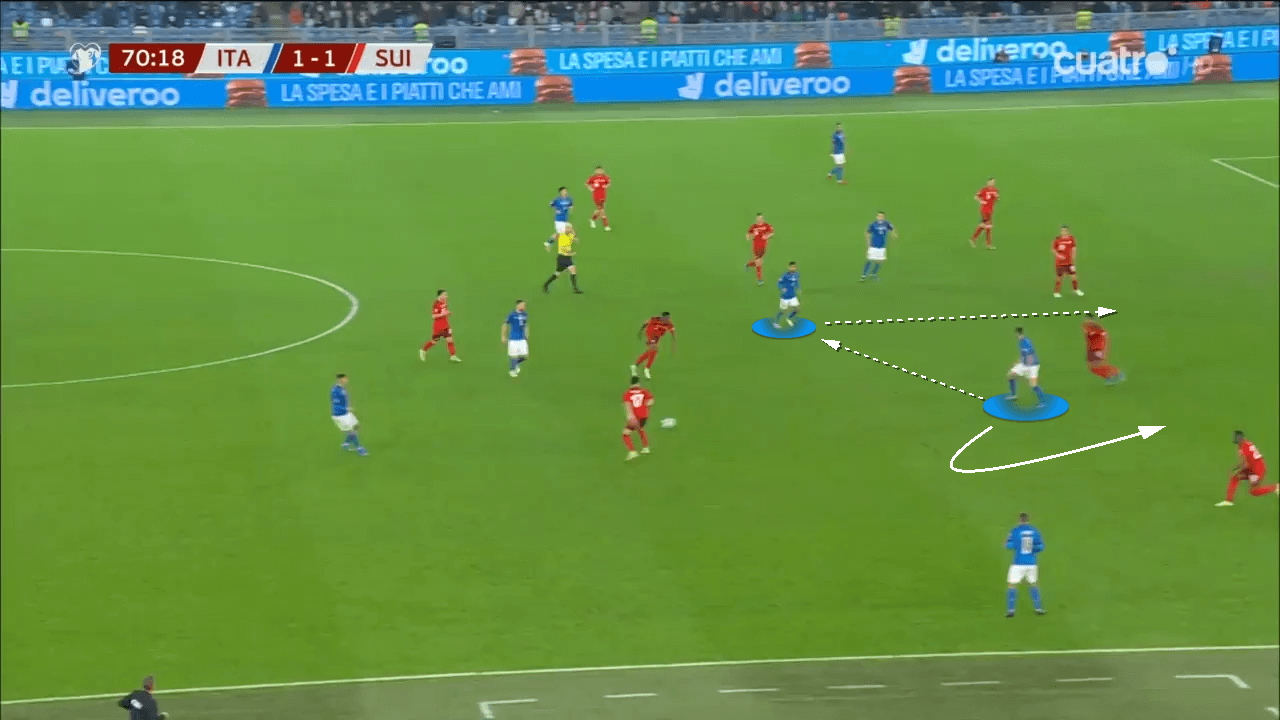 A standout tactical tinker made by Roberto Mancini was his use of outside centre-backs, as they had more freedom to drive within the half-spaces supplement attacks. With this, Italy’s use of inverted forwards instead of orthodox wingers was very effective as Domenico Berardi and Federico Chiesa on the wing, can open their body’s and look for vertical passes.

Here, Berardi is in possession; Bryan Cristante moves closer to Berardi as a support option and in doing so, dragging away Denis Zakaria from the centre of the pitch. On his left foot, Domenico Berardi can find Giacomo Raspadori as he makes his run into space. 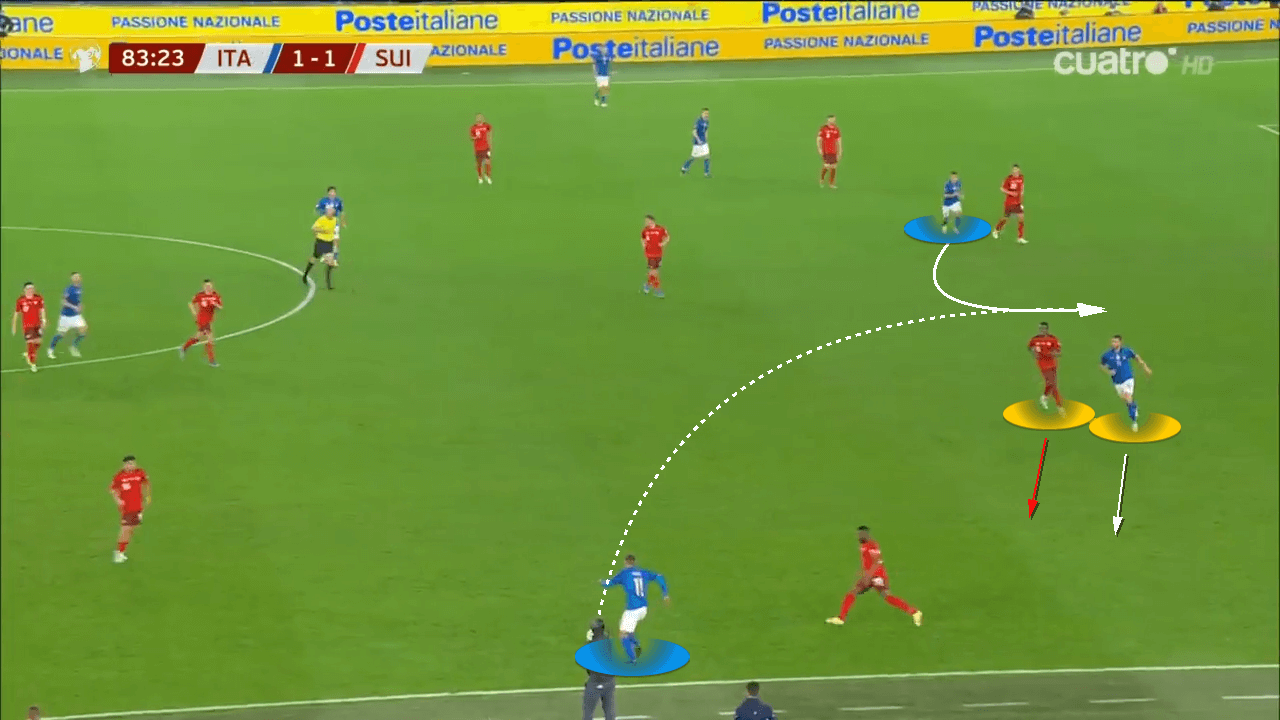 Swiss manager, Murat Yakin understood the challenge that is nullifying the attacking quality of the Italian National Team when in full flow. With this being said, Yakin decided to surrender possession, and attempt to create attacking opportunities through counterattacking and Noah Okafor was key in this respect.

The Swiss were successful when regaining the ball out-wide and Noah Okafor was their first port of call when looking for an out-ball. The RB Salzburg attacker flourished as he was able to pivot across the pitch and position himself on the last line of the Italian defence, on the shoulder of either Francesco Acerbi or Leonardo Bonucci. A perfect example of this can be seen through the opening goal of the match scored by Switzerland.

The Swiss find themselves in an advantageous 3v3 scenario with Denis Zakaria cover shadowing Nicolò Barella, as they win back possession out wide. 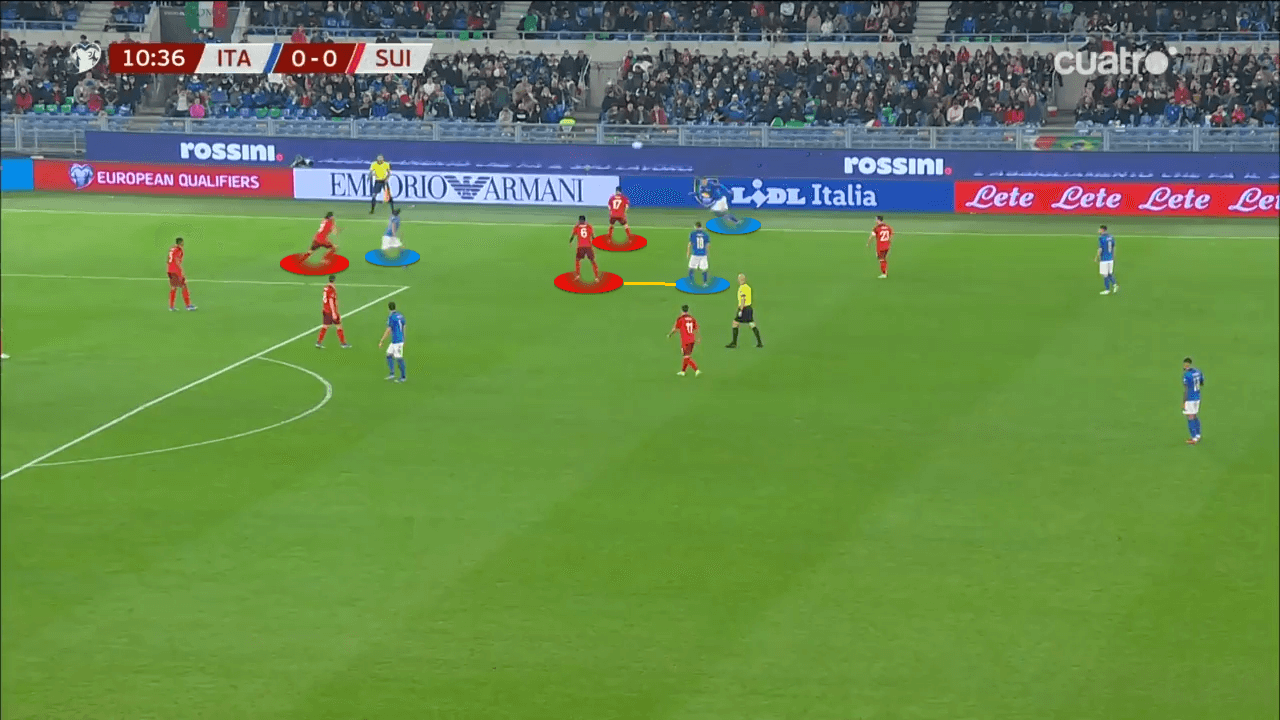 Now with the ball, Xherdan Shaqiri can turn and find Noah Okafor in the left wide channel in-between Bonucci and Acerbi. 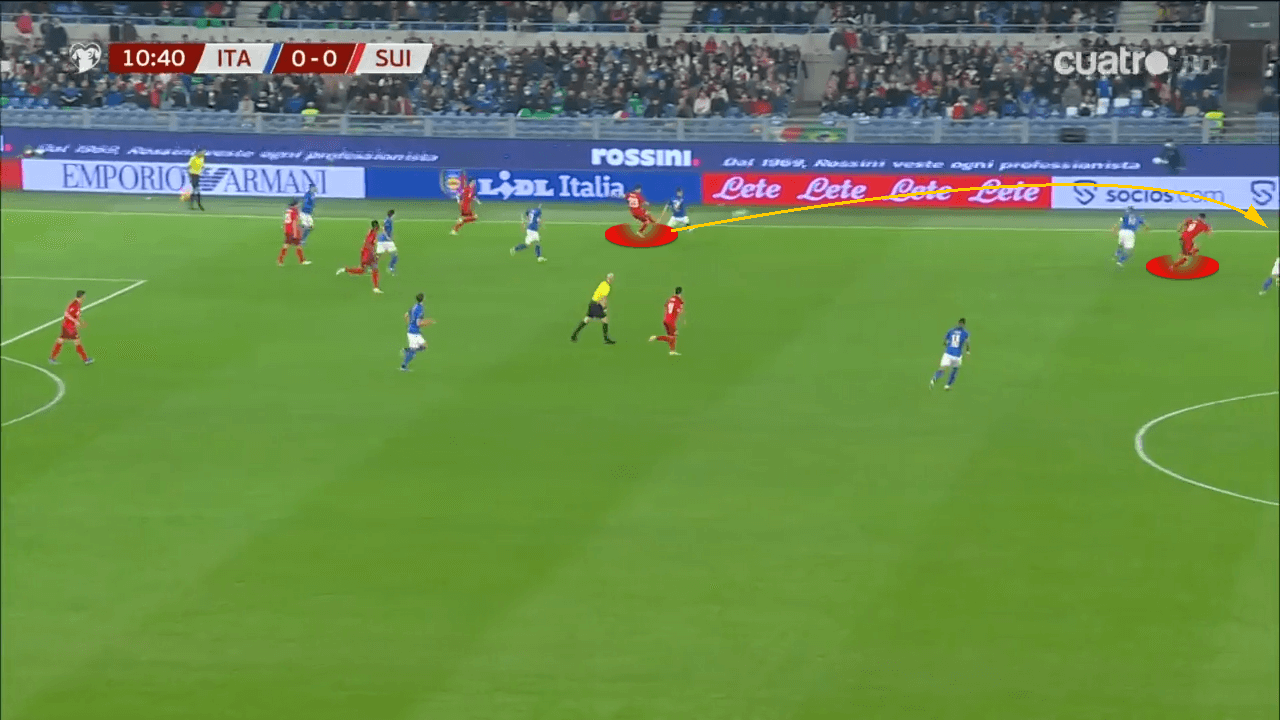 Okafor, in possession, can drive down the line and cut inside, to find right-back Silvan Widmer making a run into the box. Okafor released the ball to the full-back and Silvan Widmer connected with the ball from the outside of the box and placed the ball in the top corner. 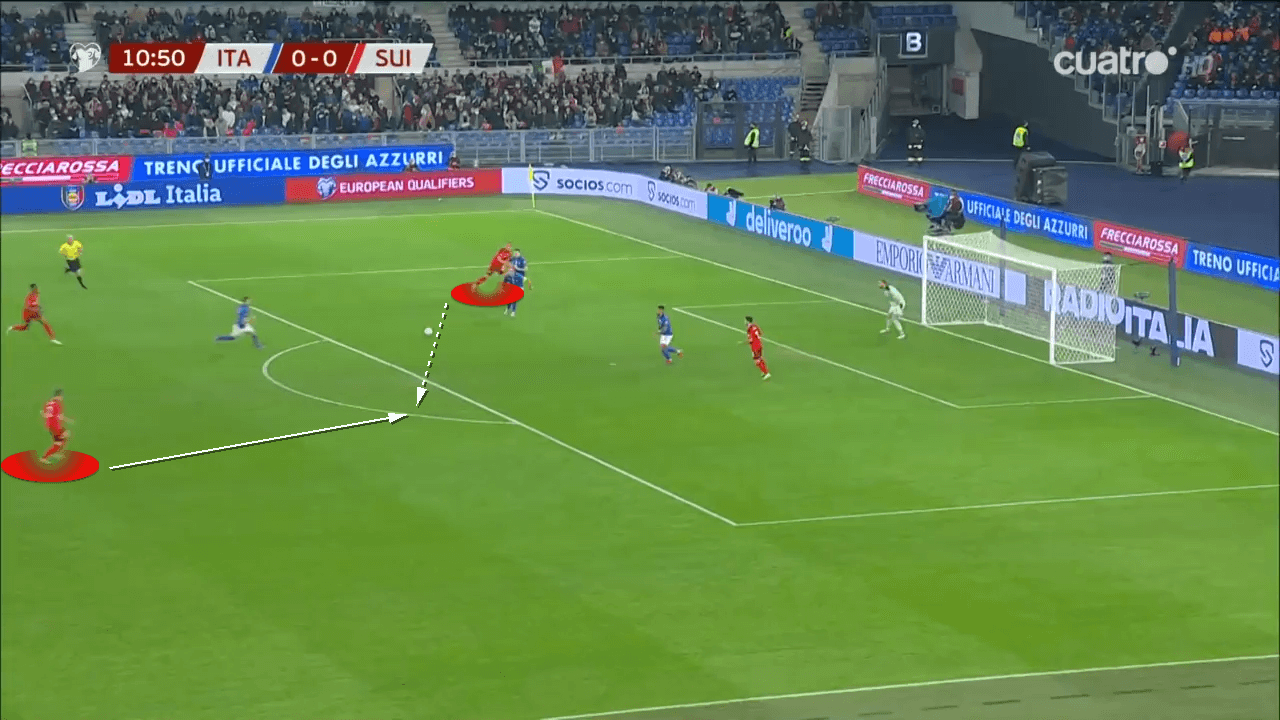 It has been a long road back to the top of international football and the appointment of Roberto Mancini has been the catalyst to their success. The once Premier League manager has given The Azzurri a newfound philosophy that has brought the best out of his talented group of players. Against Switzerland, the Italians faced a stubborn and organised defence that looked to deny verticality and press out wide. In the first half, Italy did not do enough, but with Mancini’s expertise, he was able to find solutions to their attacking issues and they worked to good effect.