It was dubbed a disaster and a catastrophe. Some called it the apocalypse. After Italy missed their first World Cup in 60 years something had to change. Out went Giampiero Ventura and his chosen replacement is former Manchester City and Inter manager, Roberto Mancini. Mancini started work in May with a win over Saudi Arabia, a loss against France and a draw against the Netherlands. As the UEFA Nations League now started with games against Poland and Portugal, Italy once again underachieved. Our tactical analysis looks at how Mancini sets the team up and some of the issues he’s faced already.

As mentioned above, Italy need something to believe in again after the failure to reach the FIFA World Cup in Russia. Unfortunately for Mancini’s men, they failed to provide this hope in the games against Poland and Portugal. In the first game in Bologna against Poland, Italy struggled in the first half and went a goal down in the first period when Chelsea midfielder Jorginho was dispossessed and Poland counter-attacked. Italy came out better in the second half and managed to salvage a draw thanks to a Jorginho penalty after the winger Federico Chiesa had come on and won the spot-kick.

In the second game, away against Portugal, Mancini changed all but two players with only Gianluigi Donnarumma and Jorginho keeping their places in the eleven. He also changed the formation from 4-3-3 to 4-4-2. Portugal were the better team throughout and edged the game 1-0 after AC Milan flop Andre Silva scored the only goal of the game.

Mancini changed both players and tactics between the two games. The Poland game saw a 4-3-3 with Donnarumma in goal, Davide Zappacosta, Leonardo Bonucci, Giorgio Chiellini and Cristiano Biraghi in defence, a midfield three of Lorenzo Pellegrini, Jorginho and Roberto Gagliardini while the front three was Federico Bernardeschi, Mario Balotelli and Lorenzo Insigne.

Against Portugal, Mancini set up in a 4-4-2 with Donnarumma in goal, Manuel Lazzari, Mattia Caldara, Alessio Romagnoli and Domenico Criscito in defense, Chiesa, Jorginho, Bryan Cristante and Giacomo Bonaventura in midfield with a front two of Simone Zaza and Ciro Immobile.

Mancini used a 4-3-3 in his first three games in charge and stuck with the shape for the clash with Poland. They had a nice positional structure in possession with the wingers and full-backs starting at full width while Jorginho at the base of midfield dropped to help Bonucci and Chiellini with the ball progression. The more advanced central midfielders moved higher and looked to find space behind Poland’s midfield. You can see their attacking shape below. 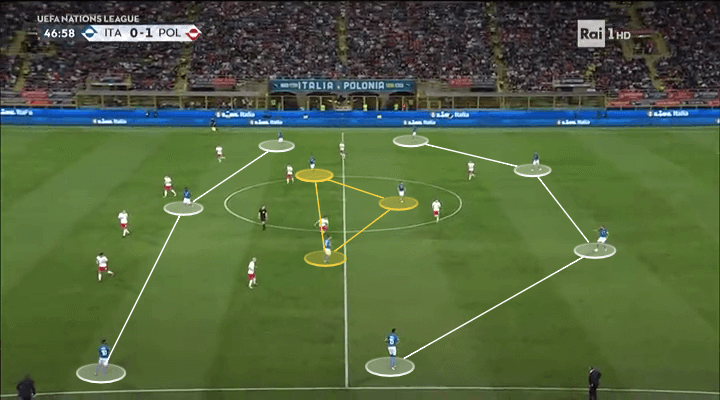 The shape gave them natural triangles and good passing angles across the pitch as Italy tried to build attacks from the back. Jorginho would always position himself behind Poland’s first line of pressure (where he was often marked by Poland’s second striker) which gave Bonucci and Chiellini lots of space against Robert Lewandowski to build the play. Italy’s passing was quite good in this game and despite the draw, I saw some promising signs in their attacking play.

One of the patterns that was increasingly visible was the movement and combinations of the two wingers Insigne and Bernardeschi. I’m a big fan of both and Bernardeschi, in particular, is a very clever player who’s extremely underrated. With the left-footed Bernardeschi on the right and the right-footed Insigne on the left it was expected to see them move in towards the centre as often as possible. They did this in a very structured was, however.

The scene below is a good example. Insigne (yellow) has kept width right until the ball is about to enter the final third. This is the time when left-back Biraghi (white) can provide the same level of high width. Insigne can then move into the half-space and look to get on the ball between the lines. As you see on the opposite side, Bernardeschi (black) maintains his width. This pattern looked similar when Italy attacked on the right. Bernardeschi would then move inside when Zappacosta provided high width and Insigne would then remain wide on the opposite side. 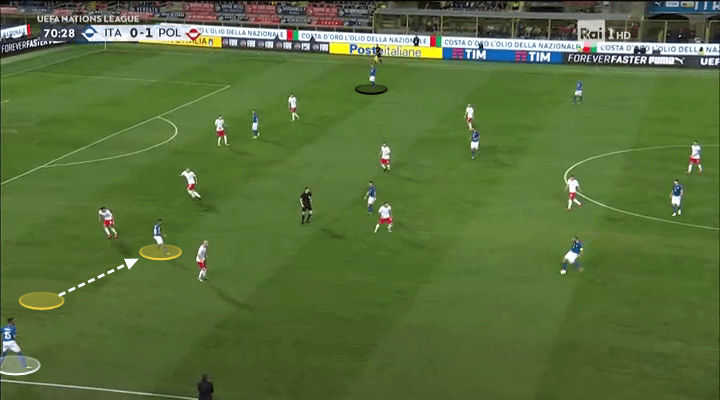 This approach gave Italy good coverage of the entire pitch in their attacking play which was severely lacking against Portugal.

Defensively, Italy looked to press Poland high up the pitch. Mario Balotelli would lead the press and get good help from the two wingers and one of the central midfielders who would often push up to mark the dropping Polish midfielder. One example of Italy’s high-press can be seen below. Balotelli presses Poland’s left-sided centre-back near the touchline with Bernardeschi in support behind him. Insigne started the press against the goalkeeper and now stops the ball from going back. Pellegrini has moved high to mark Poland’s midfielder. 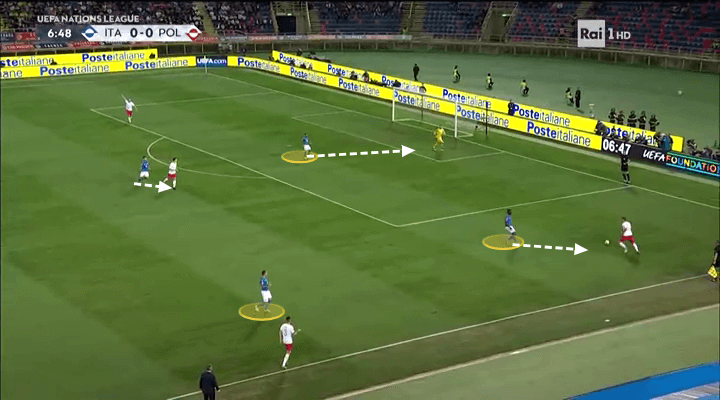 This press was often successful and forced Poland to go long. There were issues with the press though. Italy pushed their attackers and the midfield three very high while the defence remained around the half-way line which created big spaces between defence and midfield. There are two problems. Firstly, the press could get broken and then the Pole’s could attack at pace in front of the defence. Secondly, even if the Italian defence would win a long-ball in the air there would be nobody ready to pick up the second ball. One example can be seen below where the Italian front six has gone so high that there is lots of space behind the midfield line. Also, note the pressing scheme where one midfielder leaves the midfield to press a centre-back. 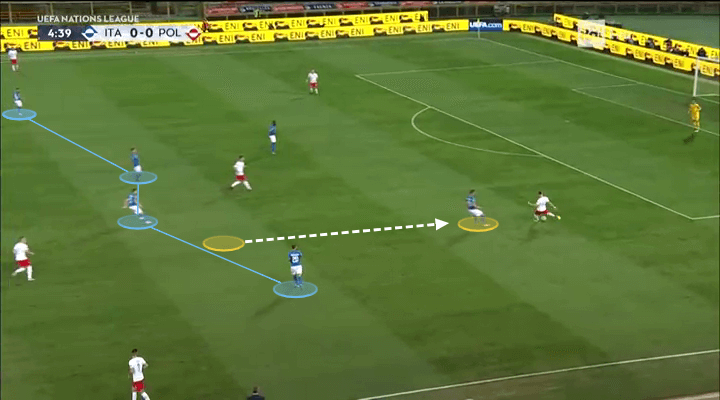 Against Portugal, Mancini as stated changed nine players and the system to 4-4-2. They tried to keep a compact defensive shape which often looked as below. 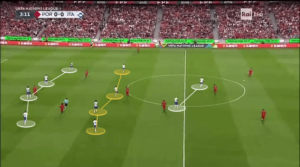 Italy, as when defending in a 4-5-1 against Poland, looked comfortable in defence and mainly defended well in Lisbon. They did defend significantly deeper than against Poland but the principles of positional defending with loose man-orientations in the high-press looked promising.

The problems lay in the attacking play. Italy more often looked for an early ball in-behind for Immobile or Zaza. There’s nothing wrong in that. The issue was that the positional structure was a lot worse than against Poland. The back-four picked up the same structure as in the 4-3-3. The midfield duo worked in tandem to try and bring some balance to the side. The front-four was positioned across the width of the field. Bonaventura made some movements inside from the left to help Italy’s central options down that side but otherwise, it looked like a very rigid 4-2-4. The natural angles from a few nights before was all but gone. On the plus side was some neat combination play between Immobile and Zaza. You can see the shape below. 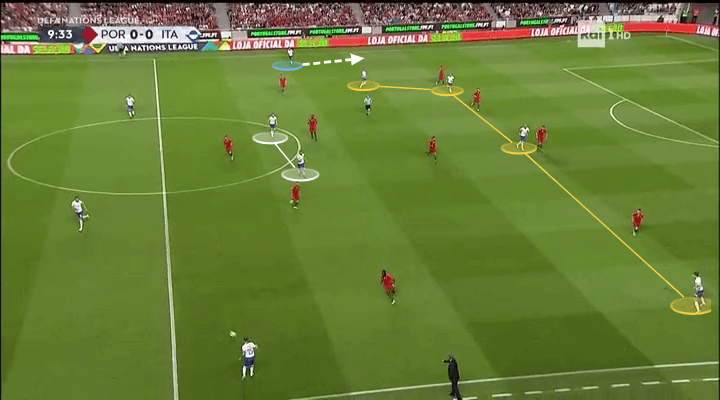 The promising possession play from the Poland game with the clever movement of both wingers was replaced by a setup where there were no natural options in the half-spaces and Italy struggled to build attacks in the attacking half. There were a few glimpses of what it could look like but it’s was so rare that it can’t be certain to be instructions from Mancini. Perhaps it was more a natural response for the players. One such glimpse was the attack highlighted below. Cristante finds Chiesa who moves inside. The Fiorentina winger instantly lays it off to Lazzari who can attack space behind Portugal’s defence. 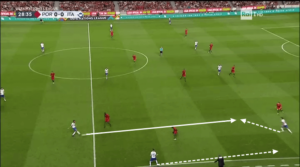 When chasing the game in the last 30 minutes, Mancini introduced Domenico Berardi and moved back to a 4-3-3. Therefore it seems like he believes 4-3-3 is the way forward, so the question is why he all of a sudden changed to go 4-4-2? Was it because he really wanted to see both Immobile and Zaza play given Balotelli’s struggles against Poland? Given Italy’s performances and results under Mancini (one win in five and that was a close 2-1 against Saudi Arabia), it would perhaps have been better to continue with a shape he’s started and got some promising signs from. It’s also time to start deciding what his best team is. If not, Italy face the humiliation of being relegated into UEFA Nations League Division B.

Roberto Mancini has had a tough start to his career as Italy coach. He should be praised for giving so many young players the chance and he has been rewarded with good performances by the likes of Chiesa and Bernardeschi. But the fact is Mancini needs to find his way now to ensure Italy will be in good shape to qualify for the 2020 Euros. Anything else and it would be an even greater apocalypse.