This summer, Andre Silva was one of the hottest strikers in the market, and after scoring 29 goals in 34 games for Frankfurt last season, the former AC Milan striker was linked with big clubs such as Manchester City and Manchester United. However, the rumours did not last long as the Portuguese international made a surprising decision, joining RB Leipzig for a fee of only €23m. Needless to say, it was a bargain from RB Leipzig, and he will play under Jesse Marsch, the new head coach who had two successful seasons with Red Bull Salzburg under his belt.

Although he had made the headlines and taken Milan’s number nine in the early days of his career, Silva’s path was more impressive than some of his national teammates. Now, he has a chance to return to the UEFA Champions League with an ambitious club. Is he ready for the new challenge? This tactical analysis will give you the strengths and weaknesses of the player and also tell you how he needs to adapt to the new environment.

According to statistics, Silva was among the top strikers in Bundesliga’s 2020/21 campaign as we’ve shown in this table. He was the second-top goal-scorer in the league, just behind Bayern Munich’s Robert Lewandowski. His amount of non-penalty goals (21) was third in the league, while his xG (25.74) and xA (4.59) ranked second and third among Bundesliga strikers respectively. Undoubtedly, he was one of the best strikers in Bundesliga in terms of offensive output.

Although Adi Hütter was also impacted by the “Stuttgart School ” and Ralf Rangnick when he coached at Red Bull Salzburg, his tactics were slightly different than Marsch’s as the players were very different in Frankfurt and in Salzburg. At Frankfurt, Silva was mainly the finisher of the team as his biggest strength was to find goal-scoring opportunities. 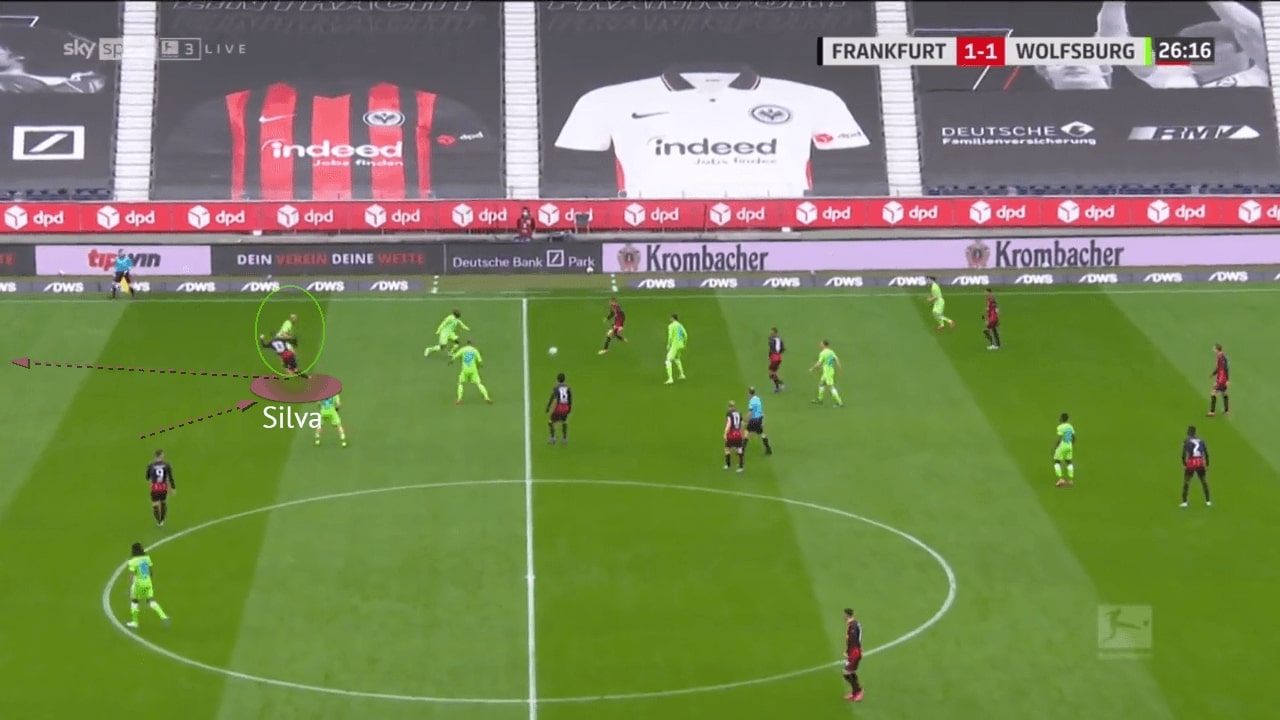 At Frankfurt, the team played direct, vertical, and aggressive football, and that means the passes were always breaking into spaces behind the defence. Silva was very good at exploiting the high line even though he was not blessed with pure pace and silky dribbling techniques.

He also knew he was not a physical player; if he wanted to outrun the defender, he had to time his runs perfectly. This was his strength as Silva always sensed potential through passes before the defenders did, so he was miles ahead when the ball was actually released. In the above image, Silva had already started his run before the centre-back realized the through ball was coming (see the defender’s body angle), and that’s why he could reach it earlier. 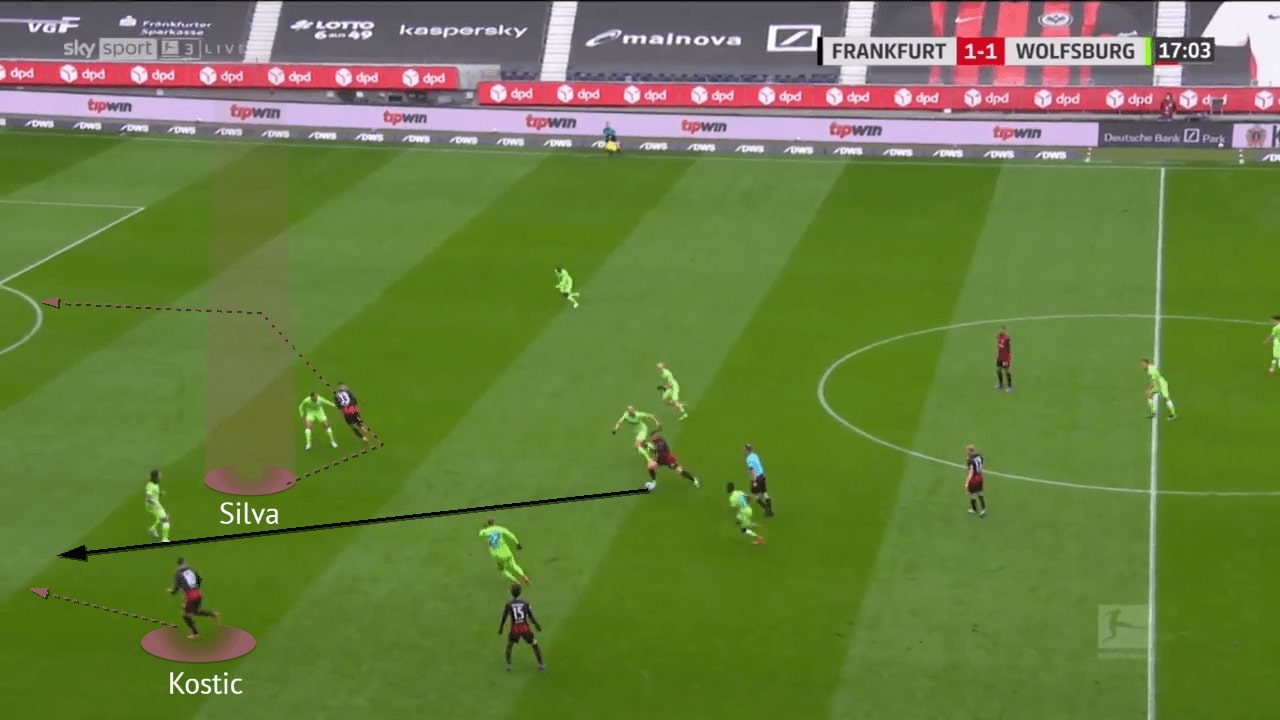 An underlying problem when exploiting a high line is the offside traps as some strikers just miss it and fall into offside positions as a result. Nevertheless, Silva has several preferred movements to avoid offsides while shaking the marker off effectively.

When his teammate gets the ball centrally, Silva might not dash into the channel initially as spaces would be limited by offside traps. What he did best was jog back to a deeper position, then round the defender to attack the channel on the blindside. Through the change of directions and diverse angles of running, Silva could avoid offside positions while positioning himself on the blindside of defenders at the same time.

Here, Frankfurt were attacking the high line, and Silva began in the left half-space but ended up in the central corridor. He knew the pass was going to the left wing-back Filip Kostić and the benefits of this movement were very clear after he made it. 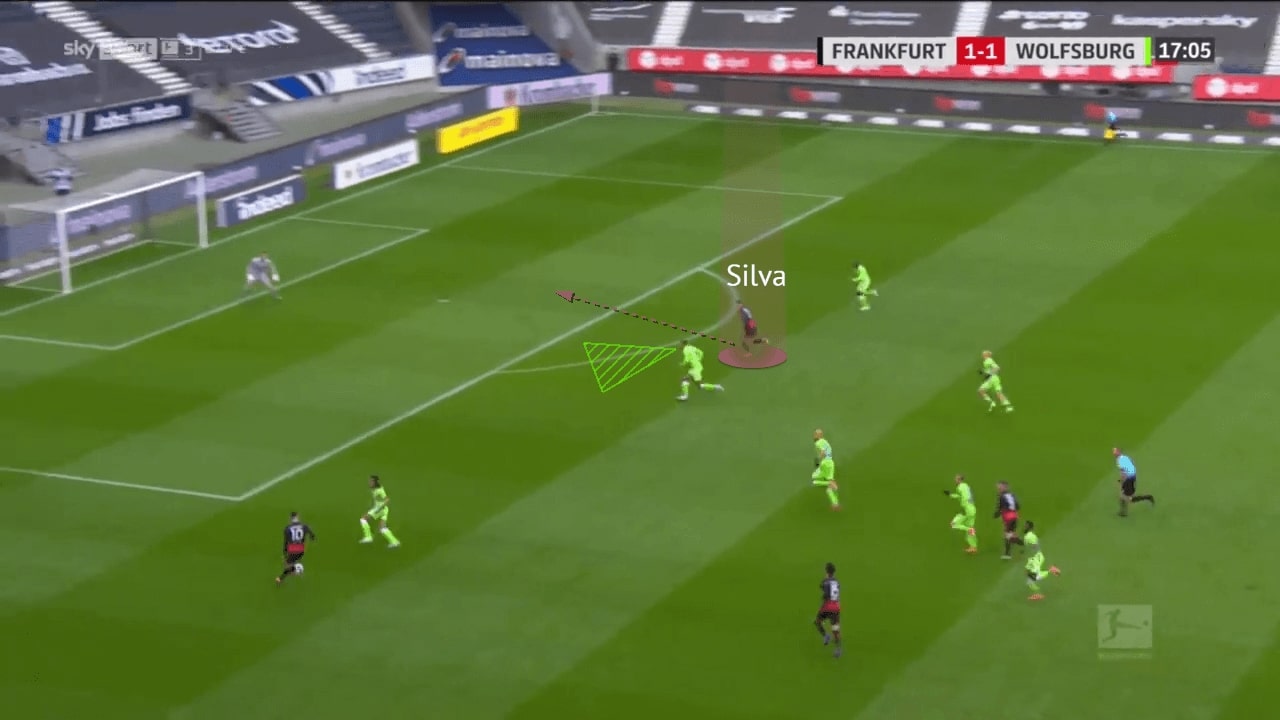 When Kostić received the ball on the left side, everyone would look at it, especially the defenders. Then, Silva would be out of the centre-back’s sight.

In the above screenshot, he was lurking in the blindside of John Brooks and if Kostić could deliver the ball to the penalty spot, Silva would be ahead of everyone to meet the cross. 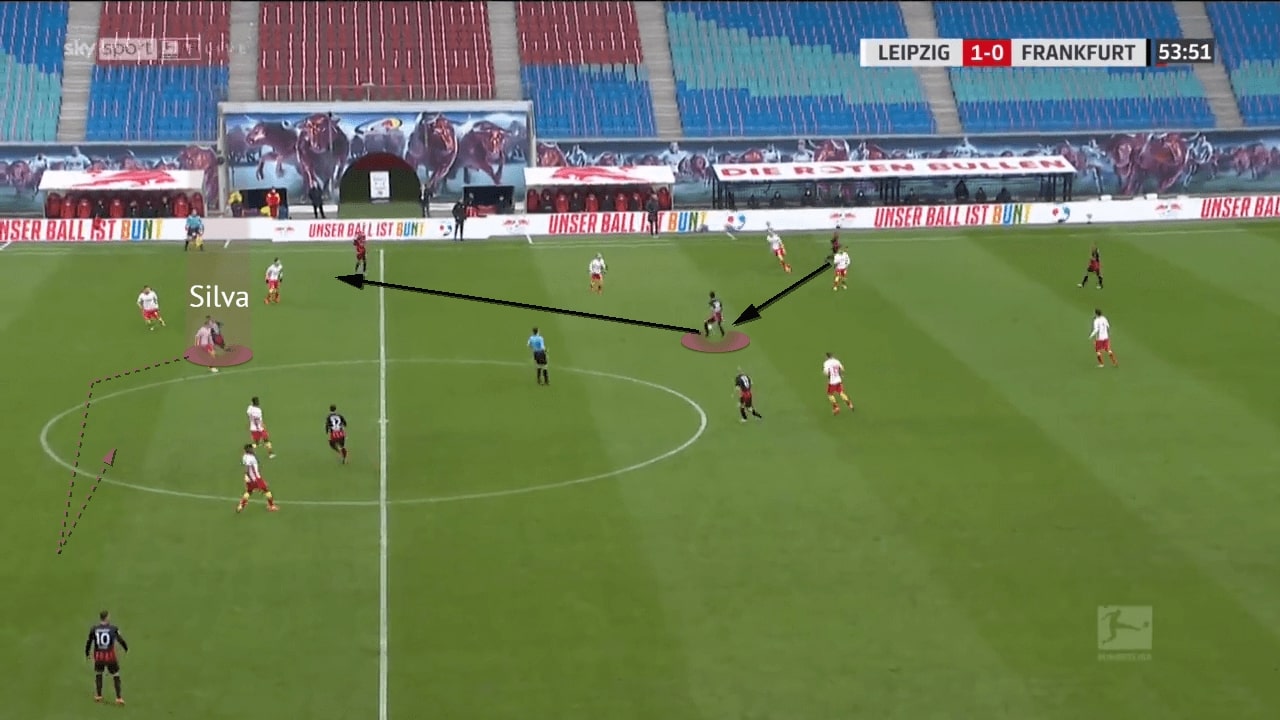 Apart from using movements to get on the blindside of defenders, Silva was also very good at repositioning himself during the attack. It’s a vital aspect of strikers as the through ball might not be released at all times so a better position must constantly be searched for to adapt to the dynamic changes of the game.

Here, when Frankfurt played the ball into the centre, Silva sensed the space behind the high line in advance, and made an early movement to attack it. However, the through ball was not played and Silva moved laterally to make sure he was onside. 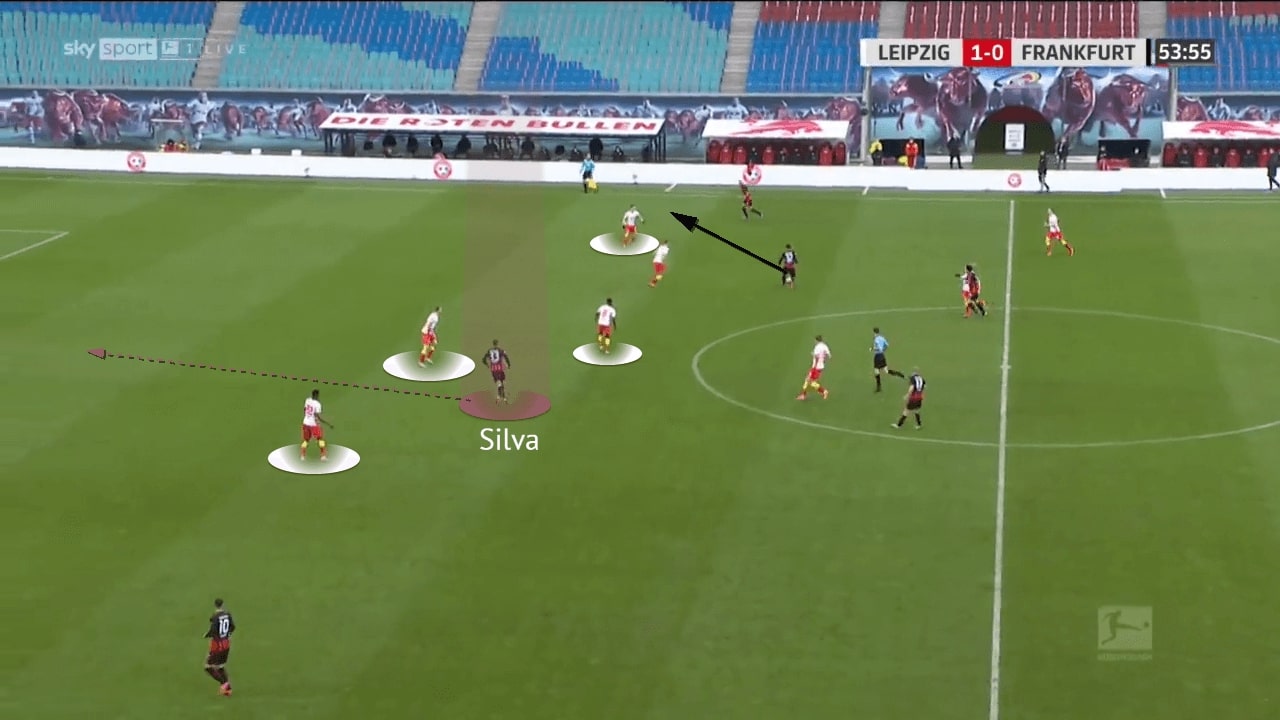 Soon the attack continued and Frankfurt went to the right side. Silva came from one half-space to the other. As the attack went sideways, the RB Leipzig defenders had to look at the ball and move their defence to that side, allowing Silva to stay on the blindside of the centre-back.

This is also a part of Silva’s play style. Instead of moving closer to offer a short option to the ball, he distanced himself from it to stay in goal-scoring positions, believing his teammates would send the ball and the chances would come. 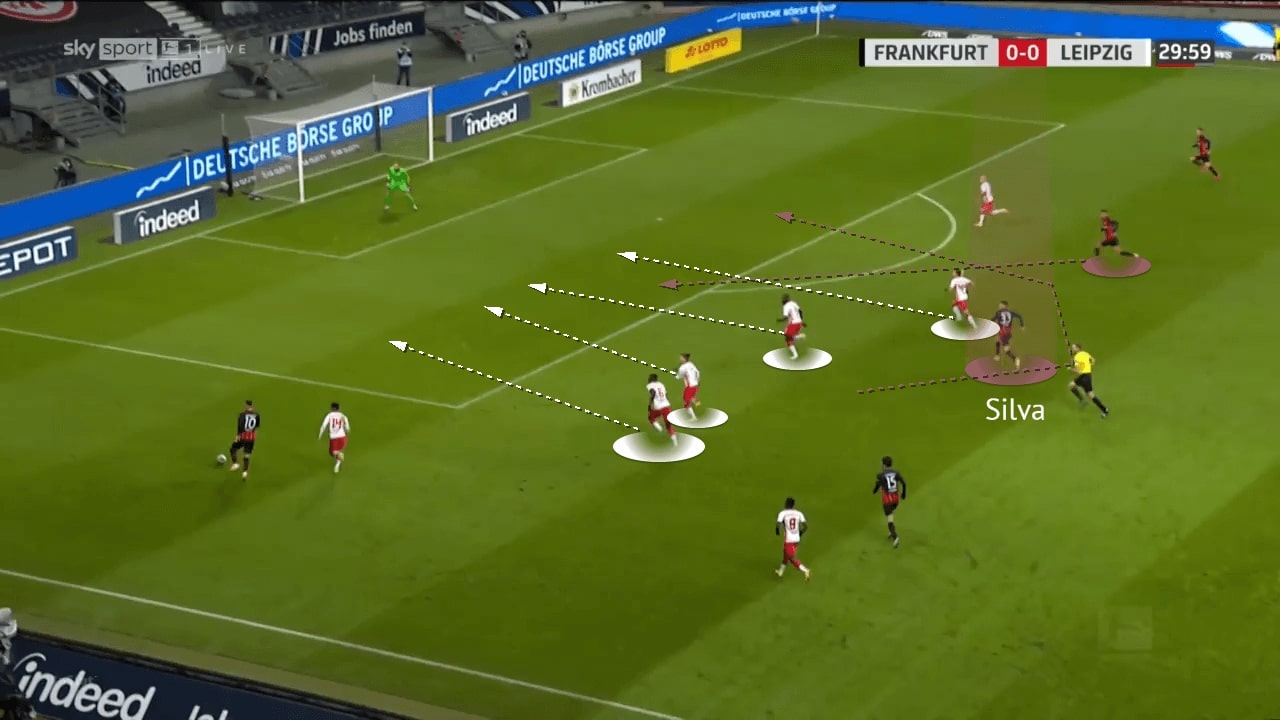 According to our analysis, Silva is also clever at attacking the penalty zone by reading the game and his opponents. Since he does not possess the physical edge to force himself in front of defenders with pace and acceleration, the 25-year-old must use his positioning and movement.

In this example, Frankfurt once again had Kostić attacking the left. When everyone was going to the front, including his teammate, Silva smartly curved his run to show up at the far-post, so he was unmarked when arriving in the six-yard box. 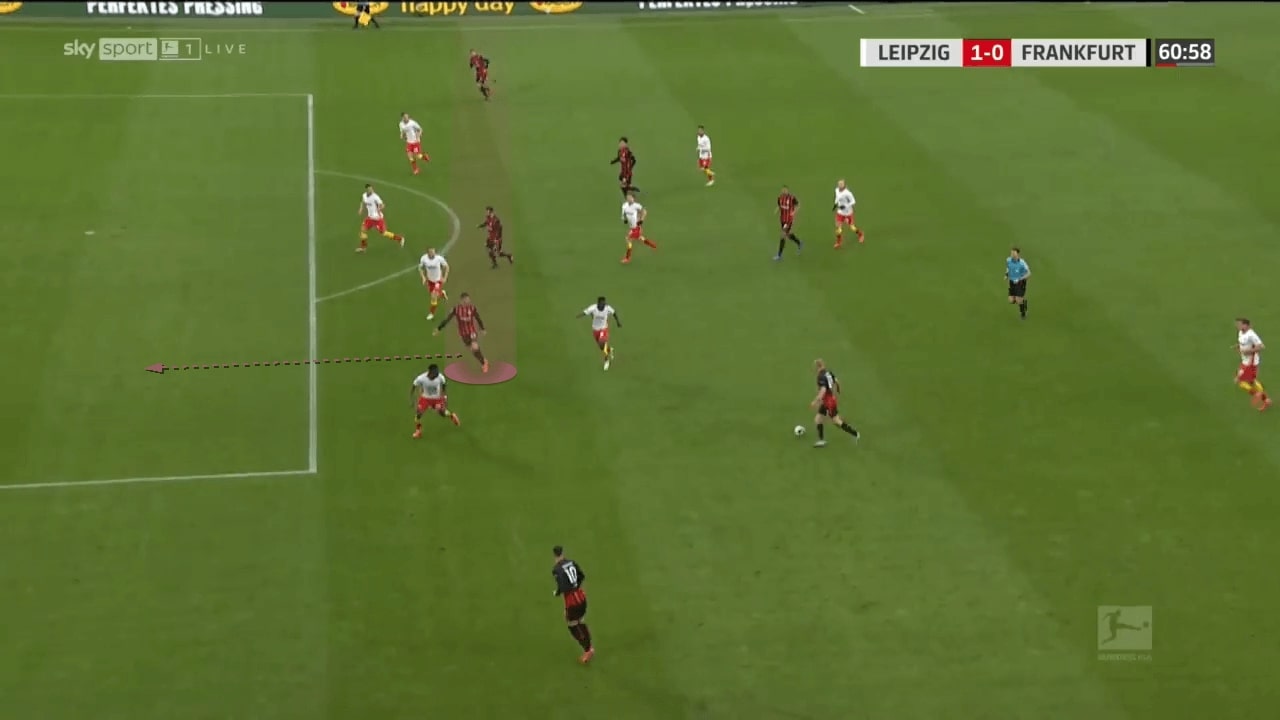 Some strikers such as Álvaro Morata prefer the ball to feet and play short passes with teammates between the lines, but Silva is not in this category. When attacking, he always expects the ball to arrive in the spaces in front so he can make runs to receive. In this example, you can see Silva showing the direction to his teammate, which tells us he’s good at communicating non-verbally as well. When there are channels between defenders, Silva often attacks that gap as he did in this example.

The search for offensive depth via runs behind the defence is Marsch’s fundamental concept. The American head coach would be happy to see his striker making runs to meet direct passes, as it allows the team to play vertically in offensive phases.

Hütter’s Frankfurt were famous for the high pressing intensity style of play when they were out of possession and it’s pretty similar to Marsch’s. Nevertheless, there are several differences between the two managers as we expect Silva might need to contribute more in the press. 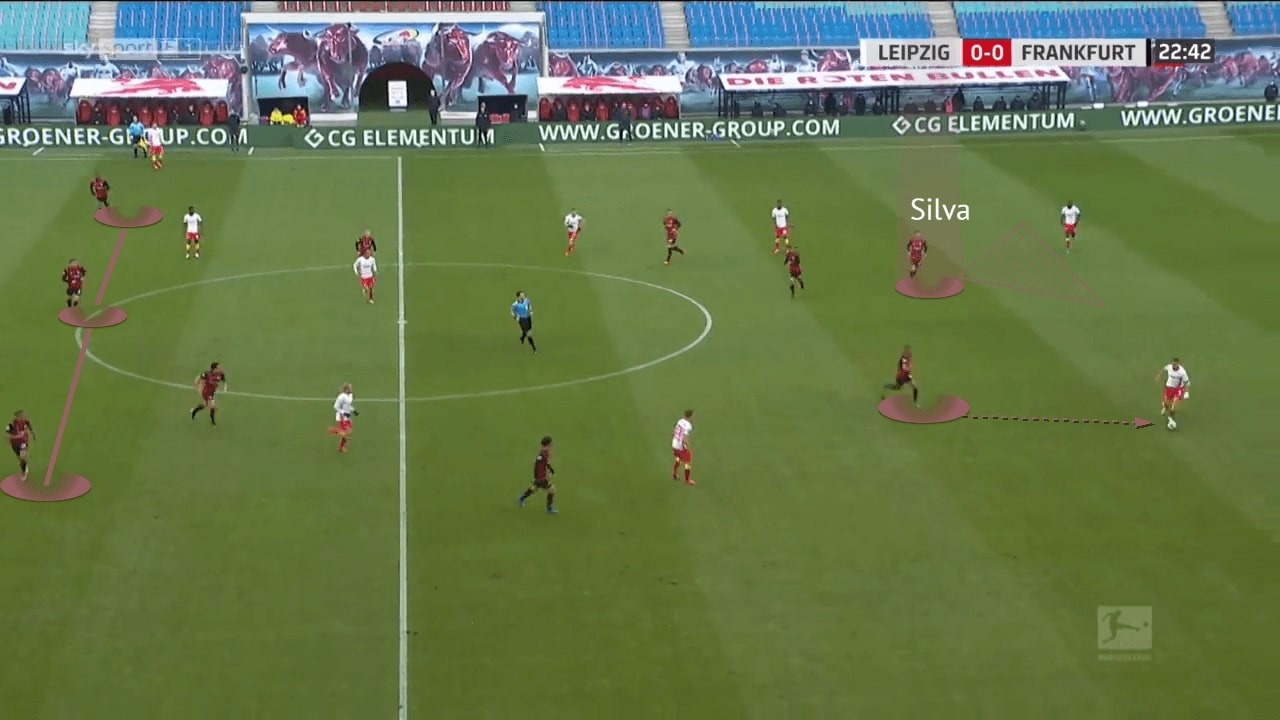 At Frankfurt, Silva had an easier job as Hütter wanted his best finisher to focus on the offensive part of the game. Even though the team would press high and intensely, Silva was not the one leading the press. Instead, he mainly stayed around a centre-back and the goalkeeper to cut the passing lane of the switch. The pressing jobs would fall to the midfielders so Silva could prepare for the counter-attacks.

Here, Frankfurt are pressing with a high line back three. The system did not require Silva to press the centre-backs laterally a lot as he just had to stay in position. The midfielders would be going vertically to press in these situations. 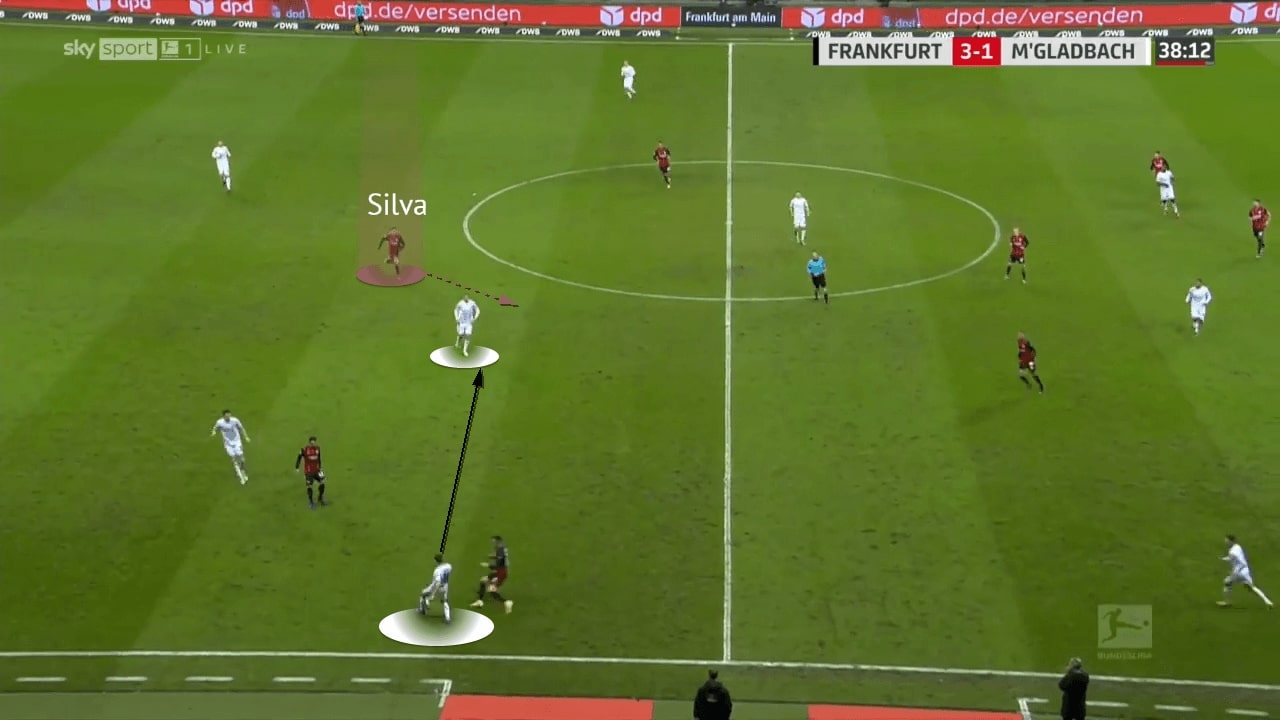 This does not mean Silva was a lazy striker. He did not lead the press but would also get closer to his teammates, or even around the opposition midfielders, to press loose touches or bad passes. This image shows he went from marking the centre-back to press the Borussia Mönchengladbach lateral pass on the blindside, helping Frankfurt regain the ball in the centre. 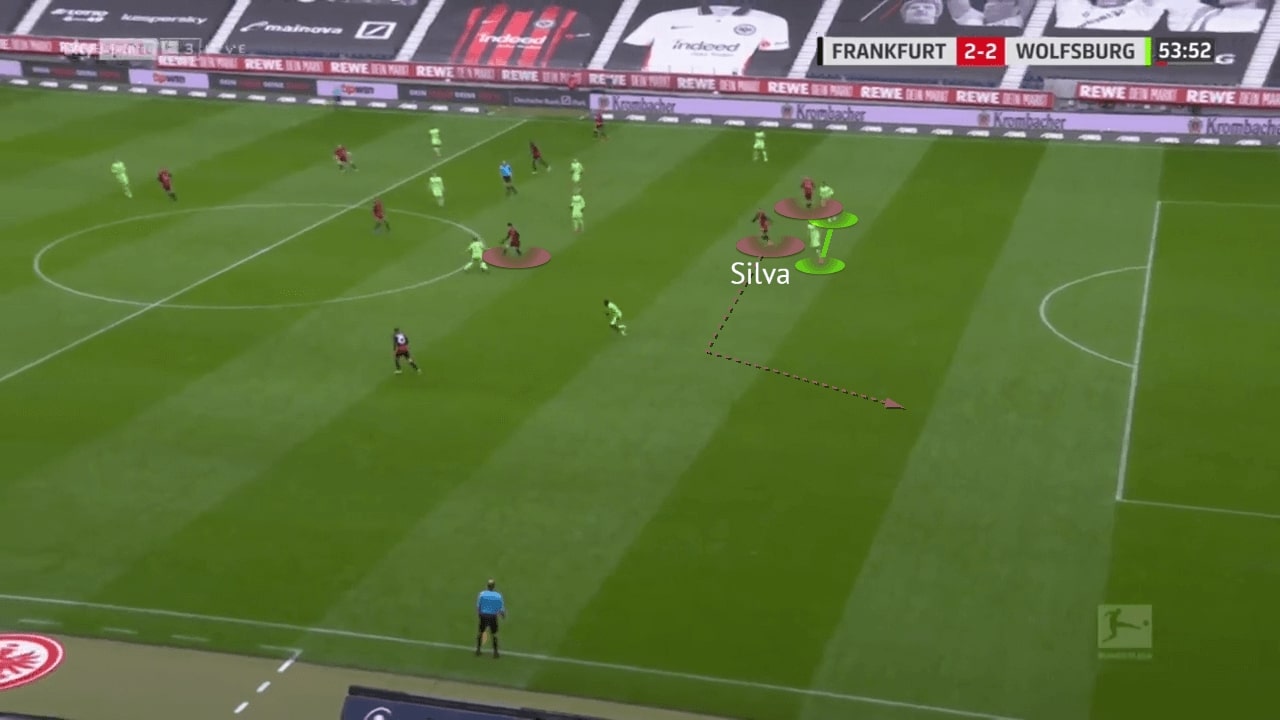 Silva is very good at offensive transitions as his movement is also applicable in this phase of the attack. During counter-attacks, he will not run vertically or too early to avoid offside positions. Instead, the 25-year-old striker has good awareness to recognise spaces and only exploit them at the right moment.

Here, Frankfurt had a counter-attack opportunity as Kamada Daichi got the ball at the centre. Since it was a 2v2 at the front, average strikers would be instantly making the run before the pass was ready to be played, which would end up being offside and allow the defenders to press. Silva, however, first moved laterally from the centre to the right half-space, and only accelerated when Kamada was ready to release the ball.

And the run was clever as well. Instead of running between the defenders where the gap was narrow, Silva smartly drifted wider to stretch this two-man defence. So, he created a decisional dilemma for the centre-backs, as well as spaces for Kamada to run with the ball centrally.

As hinted in the above analysis, Silva also has his limitations physically. He is not the Olivier Giroud/Yussuf Poulsen type of striker who could be the target man for every long ball. Marsch might be a little bit more demanding on his physical attributes in general as well. 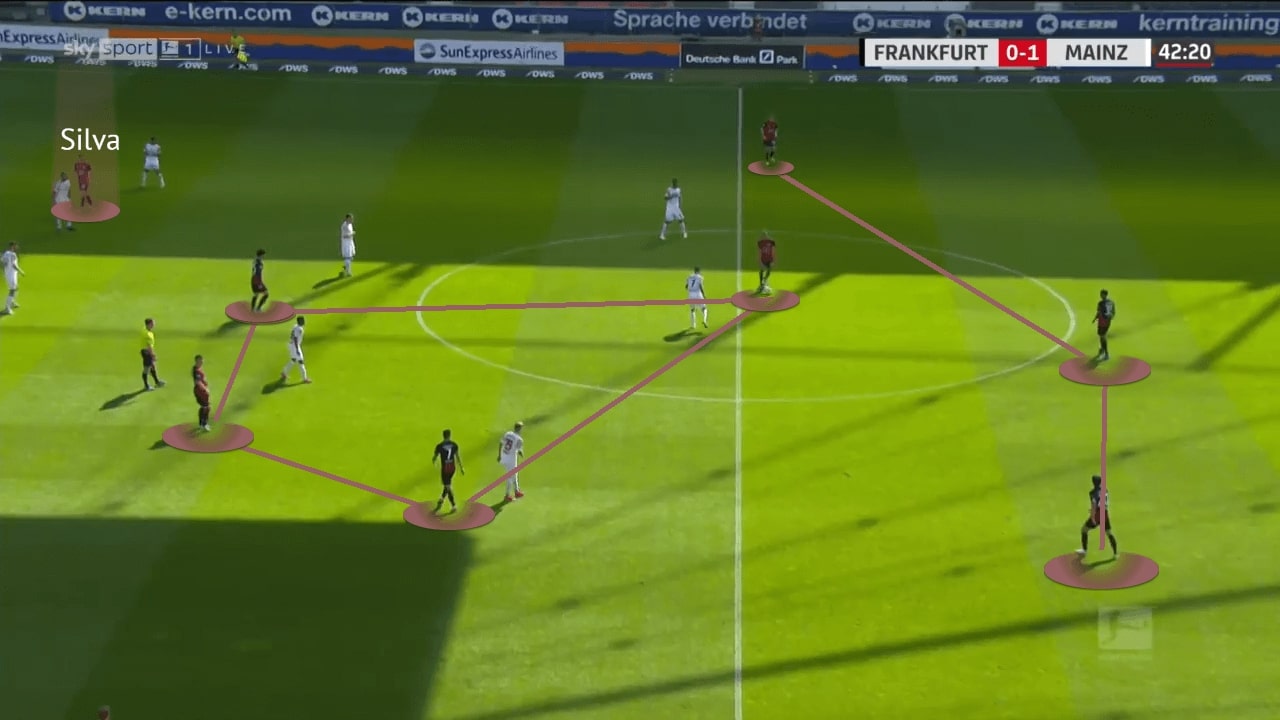 At Frankfurt, Hütter preferred rotating with several shapes in midfield, also switching flexibly from 3-4-1-2, 3-4-2-1, 3-5-2 and 3-5-1-1. But no matter how the formations were changed, Silva rarely participated in the midfield play. Sometimes the team had two strikers on the pitch but you would still see Luka Jović forming a quartet with the midfield and Silva remaining high. Under Hütter, Silva’s mission was clear – to stay at the shoulder of the defence, attack spaces behind and stretch the opponents vertically. Maybe Marsch will have a more well-rounded role for him? We will see what happened as Sliva is a bit different from the likes of Patson Daka and Erling Håland. 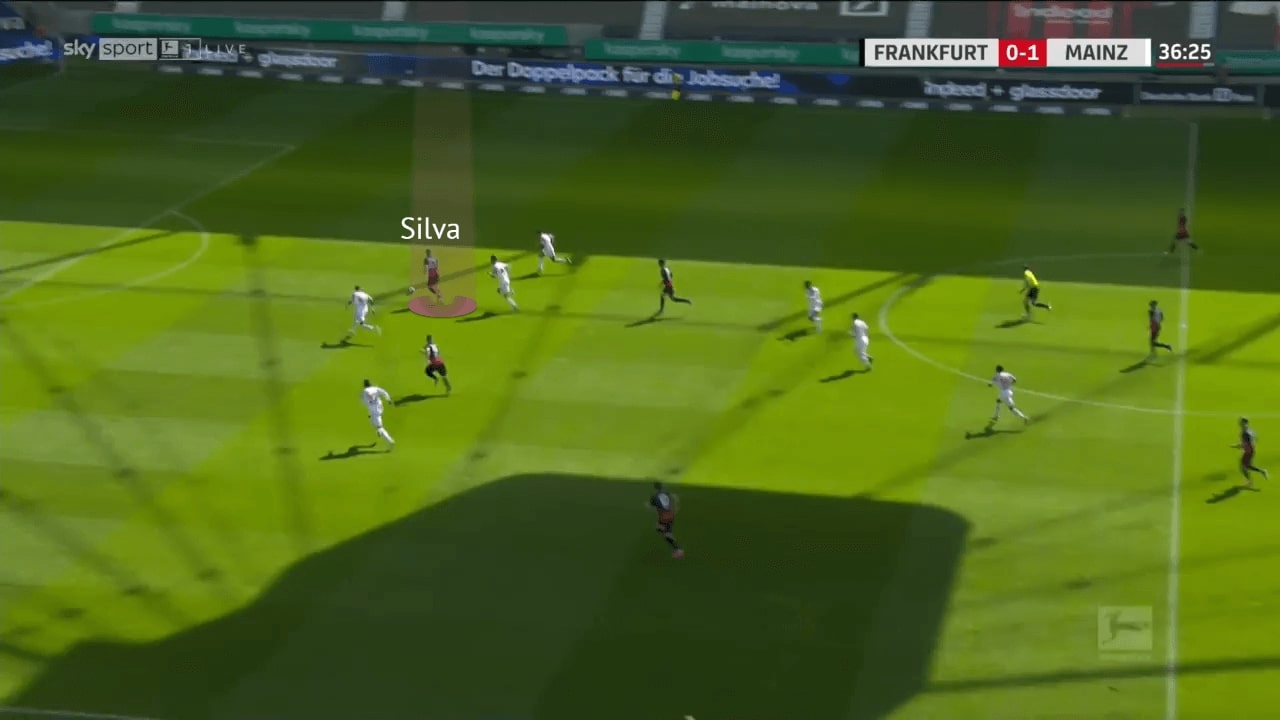 As Silva does not have great pace, as mentioned, he has to sense the moment to run earlier than the defenders. But when he has the ball, even against a high line as we’ve shown in the above screenshot, he can not beat the defenders to face the goalkeeper 1v1. Therefore, the lack of strong dribbling and pace are the main limitations of this player.

As we have analysed in this scout report, Silva has the ability to drop top-quality performances in terms of goal-scoring outputs, which makes him an extremely lethal striker. He makes clever runs that include diverse directions to achieve strategic advantages during the attack while also having the potential to help the team in the press.

At his age and with his experience, RB Leipzig made a very good bargain signing that will be an upgrade in attack. Of course, we are also very excited to see how Silva and Marsch adapt to each other and bring the best out of the forward in the coming years!