Wednesday night saw game week five in the UEFA Champions League, in group C there was an important game in terms of qualification between Sporting Lisbon and Borussia Dortmund. Both teams were on six points going into Wednesday night and with only two games remaining and Ajax had already secured qualification to the knockout stages. Marco Rose’s men came into the game off the back of two humbling defeats to Ajax in the group while Sporting had two strong wins over Besiktas in addition to strong league form in the Liga Primeira. This game would set the winner up for a strong chance of qualification to the last 16. Sporting continued their strong form with a 3-1 win over the Bundesliga side and have secured their qualification, thanks to two Pedro Goncalves strikes and a Pedro Porro header.

This tactical analysis aims to unpick some of the key tactical battles and tactics deployed that lead to the Sporting victory.

Sporting stuck to their usual 3-4-3 with Antonio Adnan between the sticks and a back three of Feddal, Coates and Inacio. Matheus Reis and Porro were the wing-backs while Nunes and Palhinha played as a double pivot in central midfield. Leaving Sarabia, Paulinho and Goncalves to make up the front three.

Dortmund was missing a few key players Including Erling Haaland, however still fielded a strong lineup with Kobel in goal and a back four of Meunier, Akanji, Pongracic and Schulz. Axel Witsel and Jude Bellingham were deployed as a double pivot and Reinier were just in front of them in the 10 role, Julian Brandt and Marco Reus were the wide men and Donyal Malen was the sole striker. 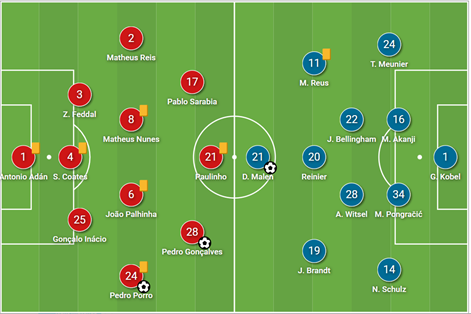 Sporting managed to really nullify Dortmund in the first half and limited them to very few chances and caused a significant amount of frustration for the German side. Sporting wanted to stop the ball progressing to the Dortmund double pivot and the attackers up the field. This saw them look to press the Dortmund back 4 especially Pongracic and Akanji looking to trigger a press of a sideways pass or backwards pass to them and this would then force Dortmund back which then allowed Sporting to squeeze up the field and turn the ball over. Here we can see Dortmund are in possession with Schulz on the ball, he is about to pass the ball to Pongracic who is facing Schulz. You can see the Sporting front 3 are looking to contain progressive passes to the midfield but Paulinho is ready to trigger the press as the pass is made.

As the ball goes from Schulz to Pongracic Paulinho sprints out to apply pressure and force Pongracic to play the ball backwards.  Sporting look to cut off his immediate passing options and force him to go backwards, as shown below. There is the chance for Pongracic to pass the ball forward but he doesn’t want to play a risky pass to Witsel or Bellingham (maybe something sporting noticed before the game).

As the ball goes back to Kobel, he has a poor touch to his right and that allows Paulinho to continue his pressure and with Sarabia ready to press his only passing option it forces Kobel into a long ball. Which allows Sporting to press up the field.

This allows Reis to come up the field and press Meunier. As the ball is played Meunier and Reis go up for the ball and Nunes collects the seconds and gives sporting the ball in the opposition territory. 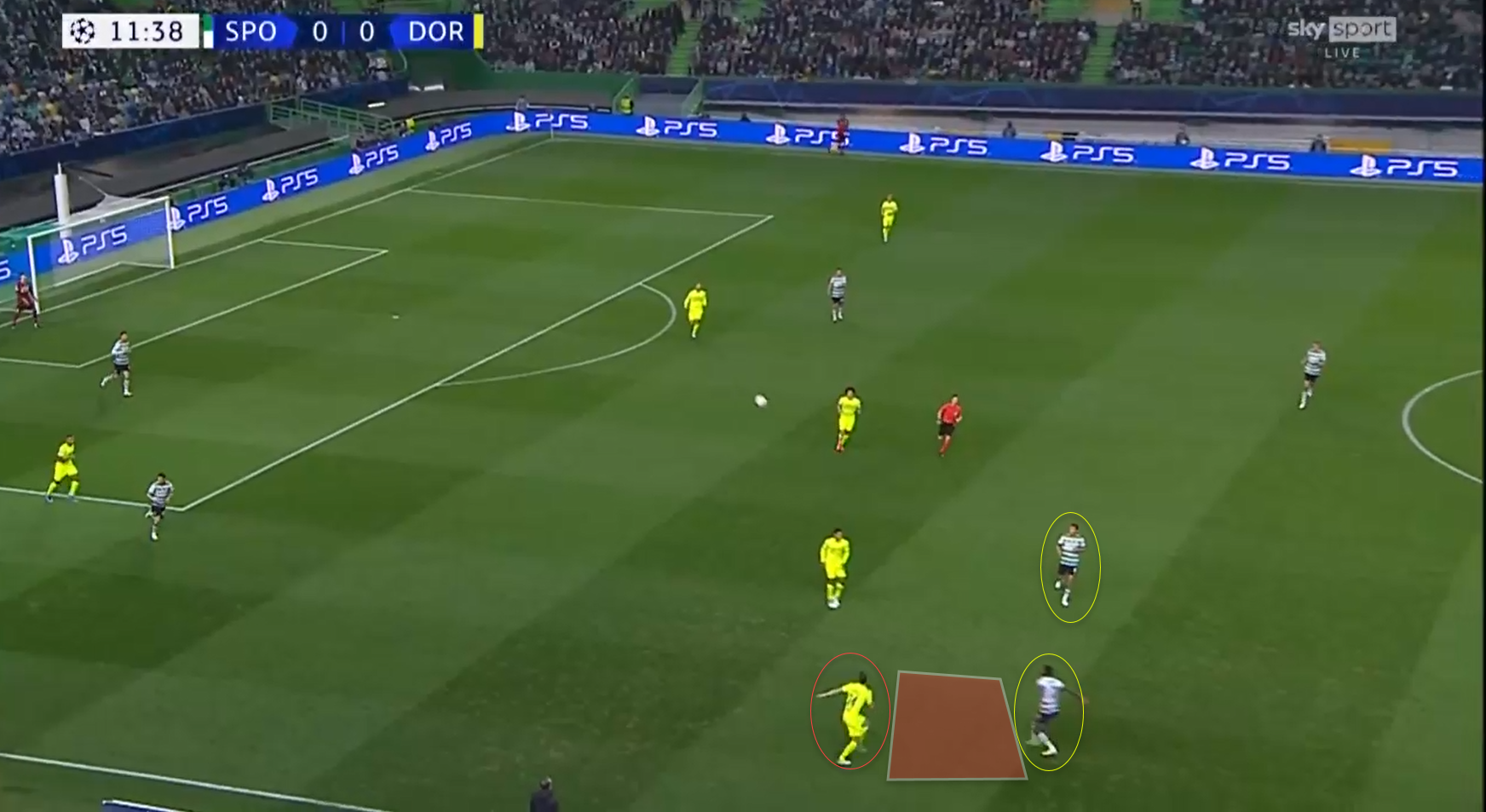 They continued to do this throughout the game especially in the first half. As shown below later in the first half. Bellingham is on the ball and again Sporting have their 3-2-5 out of possession with the front 3 waiting to press the Dortmund defenders. 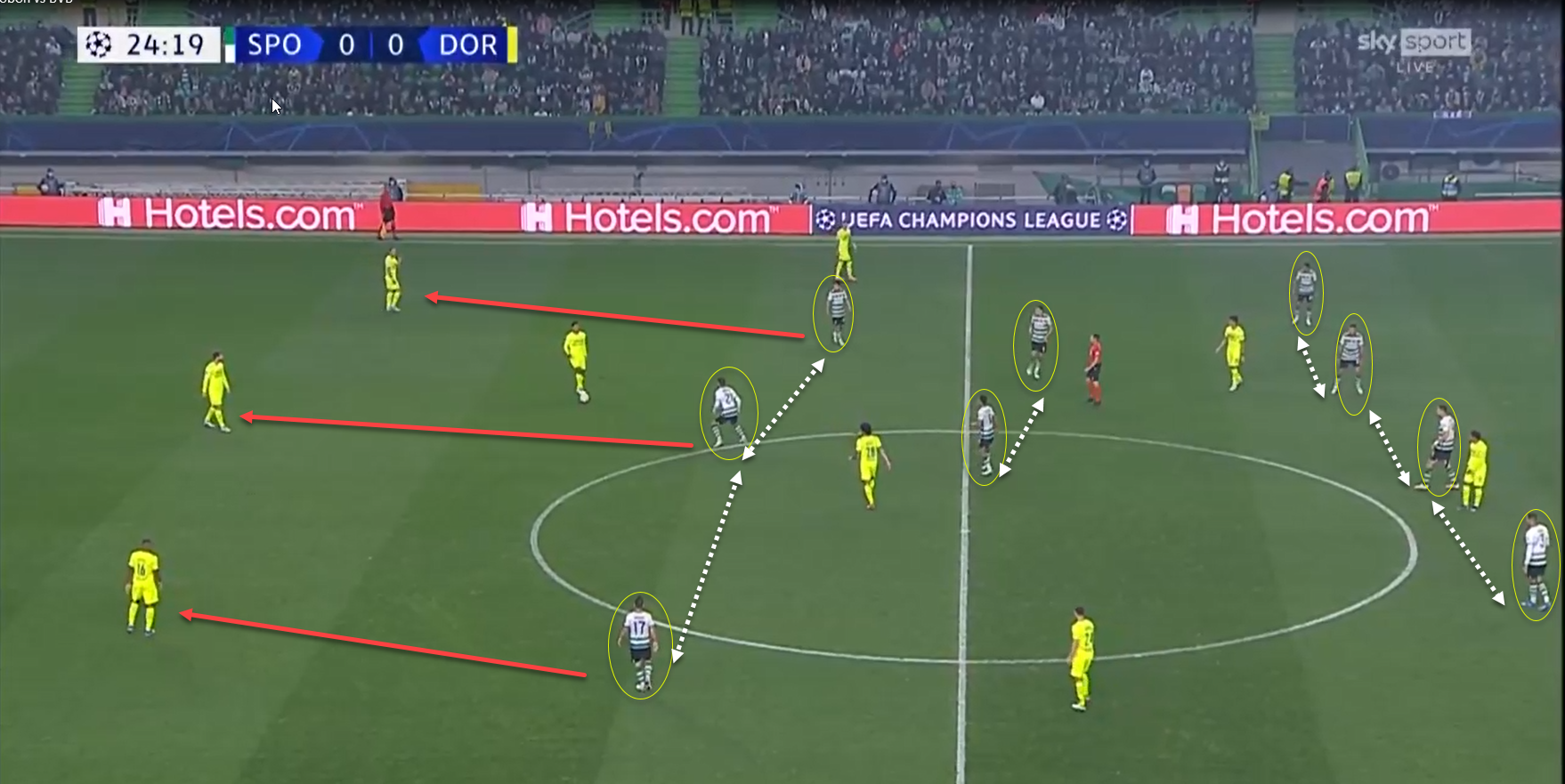 As Bellingham turns to pass the ball to Akanji Sarabia starts to sprint towards the ball. This then triggers Paulinho to press Pongracic and Nunes to press Witsel. By doing this it cuts off all Akanji’s immediate passing options.

This leaves him with two options try and play a risky pass forward or turn and go back to the keeper like Kobel did early in the game. He tries to force a pass to Witsel however Nunes manages to get in front of him and intercept the ball.

This created a 3 v 2 situation and forced Witsel into fouling Nunes.

When conducting an analysis of this game it quickly became apparent that In addition to Sporting pressing the Dortmund defenders they also looked to effectively counter-press when Dortmund had the ball and if necessary, make cynical fouls to slow the game up and disrupt the Dortmund attack. This was particularly the case when Sporting was on the attack and Dortmund were looking to quickly counterattack, they would do whatever they could to slow the attack or simply stop it to avoid the ball getting to the dangerous and pacey Dortmund attackers. This example is from the second half and Sporting have had an attacking throw-in, in the final third they lose the ball and Dortmund are looking to progress the ball quickly. Here we see both Nunes and Reis look to press Bellingham who is about to receive the ball.

Bellingham manages to beat the press and play the ball to Marco Reus who too faces pressure from Sporting players. With Sarabia, Reis and Palhinha all looking to press Reus to turn the ball over.

Reus manages to evade the press and play the ball back to Bellingham. Bellingham looks to carry the ball upfield. Porro manages to get back and try and win the ball but ends up fouling Bellingham and stopping the Dortmund attack which was a 4 v 3 situation.

Although this may not be the purest form of football it is highly effective and allowed Sporting to stop Dortmund and get back and maintain their strong defensive shape. This was something Sporting did continuously throughout the game always looking to stop Dortmund in their track by turning the ball over or by cynical fouls to stop the game. This tactic was by design from Ruben Amorim’s men as they knew that they would be most vulnerable in transition against a team like Dortmund and by committing cynical fouls and counter-pressing the ball it prevented Dortmund from hurting them on the counterattack.

Sporting when in possession of the ball looked to progress the ball up the field quickly and hurt Dortmund on the counterattack. They used a combination of direct vertical passing combined with Ball carrying from their dangerous players. This was to make full advantage of numerical advantages and space available on the counter. In this example Sporting has just won the ball deep in their own half, Sporting is going to try and progress the ball up the field as quickly and directly as possible. You can also see Dortmund have committed seven bodies to the attack.

Nunes is going to make a run beyond Witsel into the space by the touchline which takes Sporting from deep in their own half to the halfway line with one pass. Which creates a 3 v 2 situation.

Nunes continues to carry the ball into the Dortmund half where he looks to play a pass to the two Sporting attackers making runs towards the box. Nunes looks to play a long pass to Goncalves. 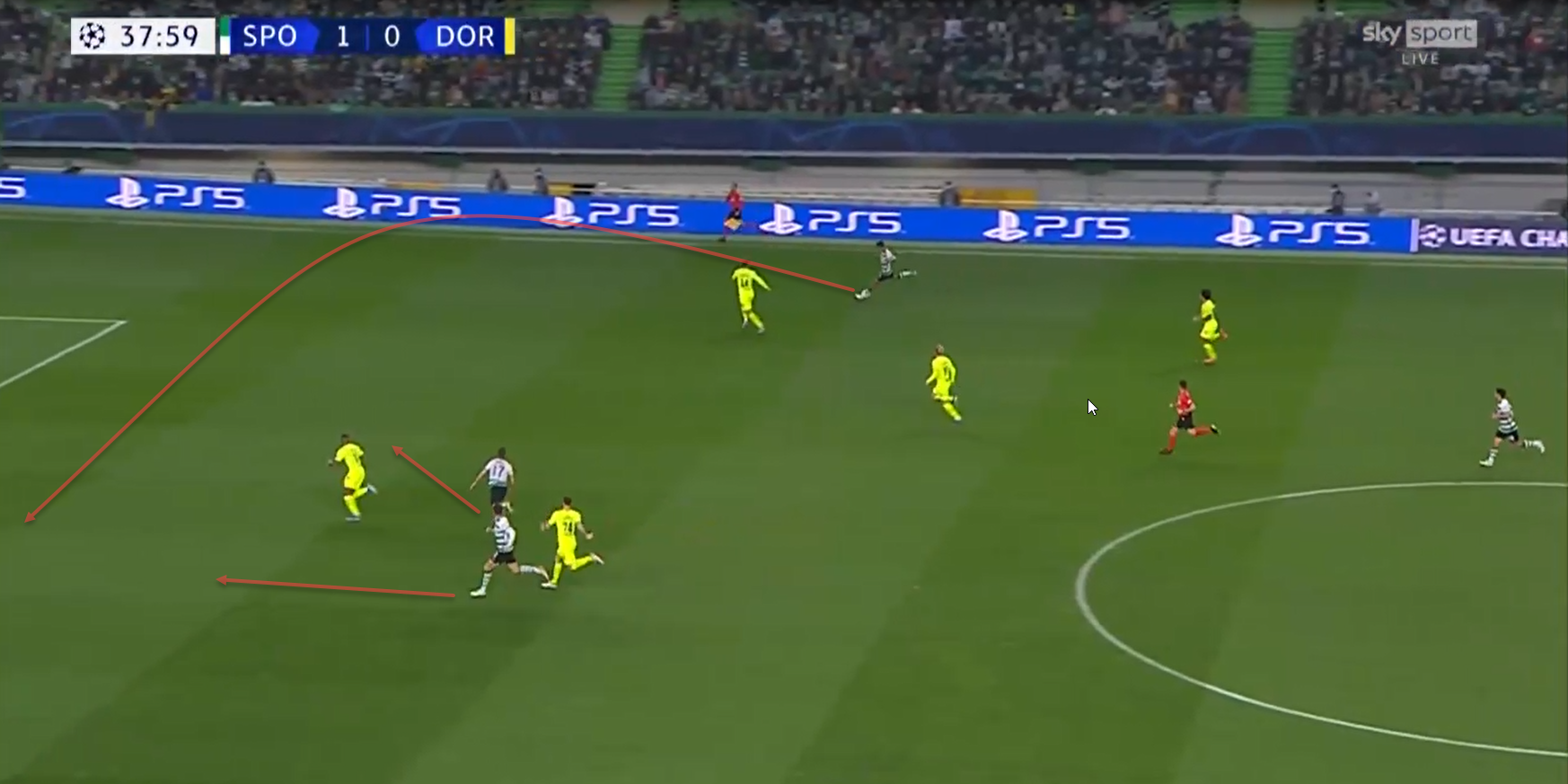 Although Goncalves has a heavy touch it shows how Sporting went from deep in their own half to deep in the opposition half, in around 10 seconds and created a goal-scoring opportunity and in fact, Sporting managed to score from the second phase of the attack. This quick and vertical transition was a theme throughout the game and lead to many of Sporting best chances. As shown below, Sporting are defending a Dortmund corner, as they win the ball back on the edge of their own box they look to play the ball forward. As the ball falls to Reis he looks to play a direct vertical pass to Sarabia who is looking to run deep

Sarabia retrieves the ball in the Dortmund half and has a 2 v 2 with the Dortmund defenders, as Goncalves looks to make a run beyond Sarabia.

Sarabia continues to carry the ball before playing the ball to Goncalves who returns the ball back to Sarabia in the box and creates a goal-scoring opportunity. Sarabia looks to dink the ball over Kobel however he makes himself big and makes a big save to deny Sporting going 3 – 0 up. It’s a total of 10 seconds from Reis’s pass to Sarabia’s shot.

Sporting showed great tactical nouse Sporting managed to nullify Dortmund and expose their weaknesses. Off the ball Sporting was compact and organised limiting the space however they didn’t just let Dortmund come at them they provided a well-constructed and effective press to try and win the ball back high up the field. They looked to effectively limit the Dortmund counterattack and transition from defence to attack with great speed and efficiency. This was a game plan and execution worthy of the 3-1 scoreline and progression to the next round of the Champions League.