Manchester City secured the first spot in Group A of the Champions League after a 2-1 win over PSG at home. Pep Guardiola’s side grabbed the three points coming back from losing position, as the Parisians opened the score in the 50th minute.

Although in a better position in the first half, City didn’t manage to convert their chances into goals, which gave their opponents the opportunity to push harder at the beginning of the second half and score. That was about the only quality opportunity that Mauricio Pochettino’s players managed to create until the end of the game.

City were the more balanced team and managed to limit PSG’s attacking movement by having more of the ball and pressing them high as soon as they lost it. Combined with the excellent movement of their attacking players, they managed to challenge the opposing keeper multiple times and bounced back with two goals in 15 minutes.

PSG looked dull in attack, despite the presence of Neymar, Kylian Mbappé and Lionel Messi. They were lacking creativity and failed to break through City’s press and well-structured defence.

This tactical analysis examines the tactics of both managers and explains how Manchester City achieved the important victory.

Guardiola opted for his favoured 4-3-3 with Ederson on the goal and a backline of João Cancelo, Rúben Dias, John Stones and Kyle Walker who were all very highly positioned throughout the game, being key in possession and supporting the attacking actions. The former Juventus defender and Walker constantly challenged PSG on the flanks and were the most active passers who supplied the attackers with quality balls.

In midfield, Pep relied on Oleksandr Zinchenko, Rodri and İlkay Gündoğan where the latter were retaining possession and orchestrating the play. In attack, Raheem Sterling, Bernardo Silva and Riyad Mahrez were valuable and created many chances through their movement and accurate actions on the ball.

Zinchenko was replaced with Gabriel Jesus immediately after they conceded, trying to bring more explosiveness and threat in the box, which also resulted in a switch to 4-4-2.

Pochettino also set his team up in a 4-3-3. Keylor Navas covered the goal, while the four-man defensive line consisted of the former Inter full-back Achraf Hakimi, Marquinhos, Presnel Kimpembe and Nuno Mendes. The full-backs who usually support the attacking actions were limited this time their actions under pressure weren’t accurate. In midfield, Idrissa Gueye, Leandro Paredes and Ander Herrera were responsible for breaking through the press and supplying the front trio with balls but they failed to do so. Most of their chances up front were created thanks to their attackers Neymar, Mbappé and Messi dropping back and picking up the ball, moving with it forward. Contrary to their opponents, they preferred attacking through the central areas.

Pochetinno had to deal with a couple of injuries too, as both Mendes and Herera had to go out, forcing the manager into making three changes in six minutes. They didn’t have the wanted effect and didn’t change the dynamic of the game for the better, as City found some gaps again and scored their second goal afterwards.

PSG’s actions in possession were often limited. The opposition constantly pressed high and aimed to trouble the French side’s build-up from the back. This forced the defenders to adjust to the circumstances and move closer to the goal area, providing passing options for the keeper who would be the starting point of their build-up-play. They were engaging the defenders, trying to free up some spaces behind.

The whole team was forced to drop deeper to be able to progress the ball and create pass combinations due to them being pinned back. Even when their attempts to recover the ball and quickly move it forward were successful, their low positioning often resulted in not having enough people up front to do the transitions. Despite that, they managed to quickly escape the pressure on a few occasions and that’s how the Parisians’ created a few chances on a counter.

City’s movement though often blocked the passing lanes and disconnected the opposing players and creating a gap between the lines that PSG’s midfielders were unable to bypass. Their ball progression was disturbed by City’s positioning and press which resulted in a very low percentile of accurate progressive passes (60.61%). 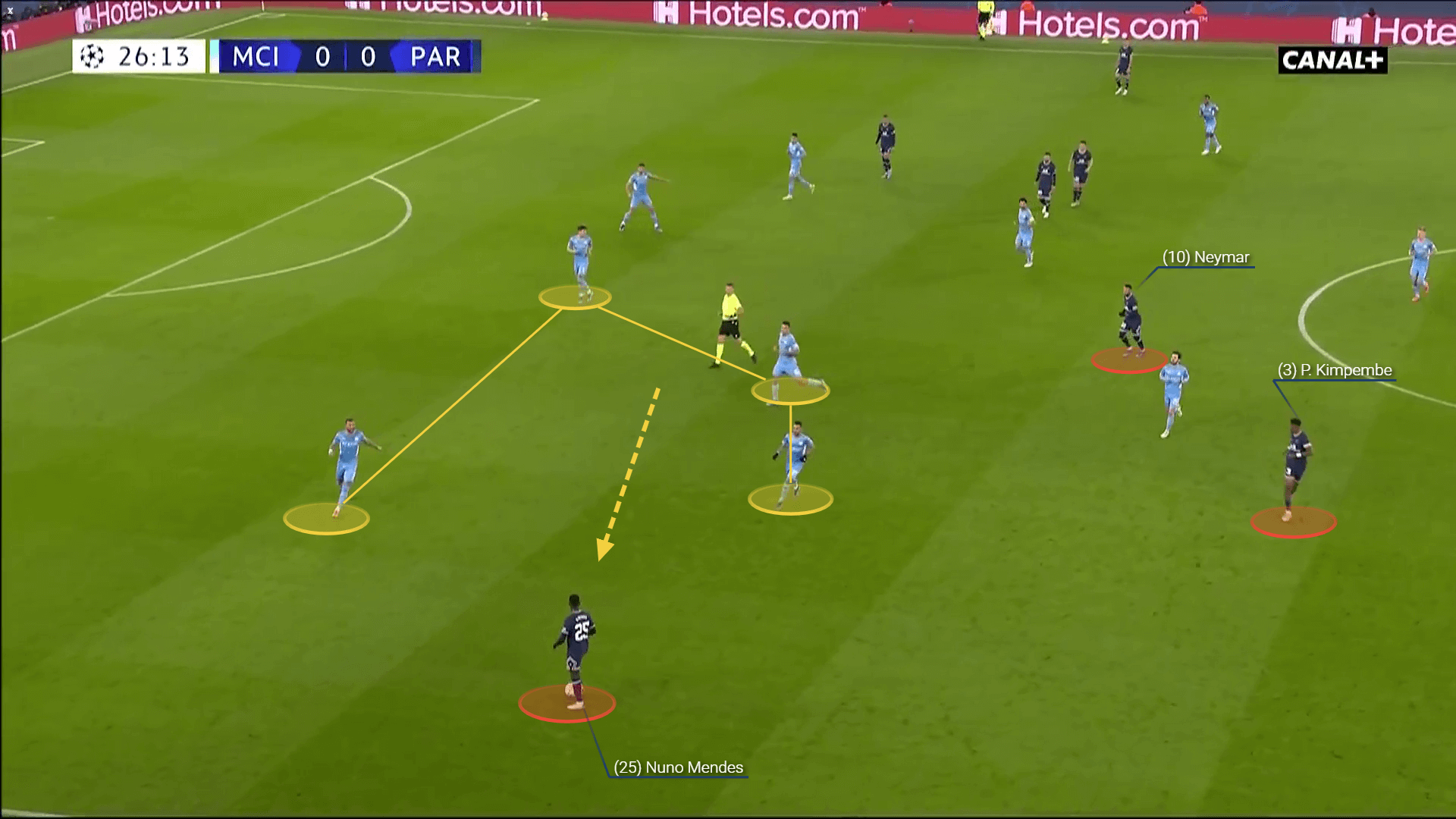 PSG tried to exploit the underloaded area, but City’s players quickly shifted around and didn’t allow the PSG players to make any runs and offer Mendes a passing option.This led the team to rely mainly on the attacking trio’s movement and creativity to drag defenders out and create opportunities. All three forwards constantly moved back to pick up the ball and then progress it either through their individual skills and control or through link-up-play.

Neymar, Mbappe and Messi’s support in transitions was crucial for the team reaching the final third and creating chances. Despite their technique and flair, they could hardly reach the advanced areas, due to the opposition’s tight marking. The Argentine was the one who was constantly surrounded by a few City players, which limited his impact on the game immensely. Although he was the key figure in PSG’s goal, he didn’t manage to produce a single shot in the game.

The low number of crossing attempts (5) shows the lack of threat provided from the wide areas and the high reliance on movement and through balls centrally. Their creativity, though, wasn’t optimal too and they failed in their very few smart pass efforts.

City being smart both in defence and attack

As mentioned, City’s defending began with their high pressing, which was their key asset in the game. They recovered the ball 52 times and a whole 34 of those were in the opposition’s half. The team were focused on blocking the passing lanes and forcing the PSG players into mistakes. They were targeting the midfielders as they were lacking composure under pressure. Pochettino’s side often lost the ball in their own half with the main responsible for these unsuccessful actions being the midfielders. Their ball losses resulted in opposition shots on a few occasions which boosted City’s confidence in attack and encourages them to continue their press.

Another part of City’s defensive strategy was their measured direct challenges. The team finished the game with 12 fouls but only four of these were committed in their own half (two of them out of desperation). Every other of their moves would be well-measured and tactically used to stop the transitions but yet avoid yellow cards. They would try to stop the opposition’s explosive attacks by fouling them in “safe” areas and these tactics fulfilled their purpose on a few occasions.

Guardiola’s side were also smart in possession. Their advanced positioning as a unit and very high pass completion percentile allowed them to control the game in the opposition half and create opportunities. The connection between the players and their constant movement often resulted in breaking their opponents’ defensive structures.

The team most frequently used Cancelo’s and Walker’s attacking proficiency to supply the attackers with the ball, while they would often move to the wide areas and cross the ball. The players’ movement off the ball allowed a few of them to go out wide and cross, which brought additional confusion for the PSG defenders and the personnel in the dangerous areas was constantly changing.

Mahrez’s accurate passing and crossing from the right were crucial for the team in the final third. He would constantly combine with the full-backs and the midfielders in efforts to create gaps and draw the opposition, but he would also show a great connection with Bernardo Silva. The two players exchanged many passes throughout the game and used their spatial awareness and movement to expose the opposition and exploit the half-spaces. PSG left too much space for the Moroccan which he exploited smartly by making progressive runs (5) and dribbling past his markers.

On the other side, Cancelo’s and Sterling’s strong positioning threatened their opponents additionally and expectedly led to them conceding.

As our analysis showed, Manchester City were persistent and smart enough to trust the process and focus on what they do best – use a lot of passing and movement to catch the opposition off guard. Their defensive strategy, though, is what allowed them to be efficient as they successfully blocked PSG’s efforts and limited the Neymar-Mbappe-Messi trio’s access to the final third.