This analysis delves into how Sporting set up out of possession when operating with a back five. It’s commonplace for teams to defend this way, but Sporting combine some typical defensive patterns within this system along with a fluid structure where they seek to defend specific spaces on the pitch, rather than each player having an individual role.

Playing with a back five allows a team’s defence to be slightly more cavalier with their defenders pushing up out of the backline to press an opponent. Some teams will use the back five to cover most if not all of the width of the pitch, with the wing-backs pressing the wide areas, and allowing a midfield three of four to stay centrally compact. Sporting Head Coach Ruben Amorim certainly uses his wing-backs to press wide areas, but sets up in a unique 5-2-3, with an initially very compact and reserved back five, as we can see in the following image. 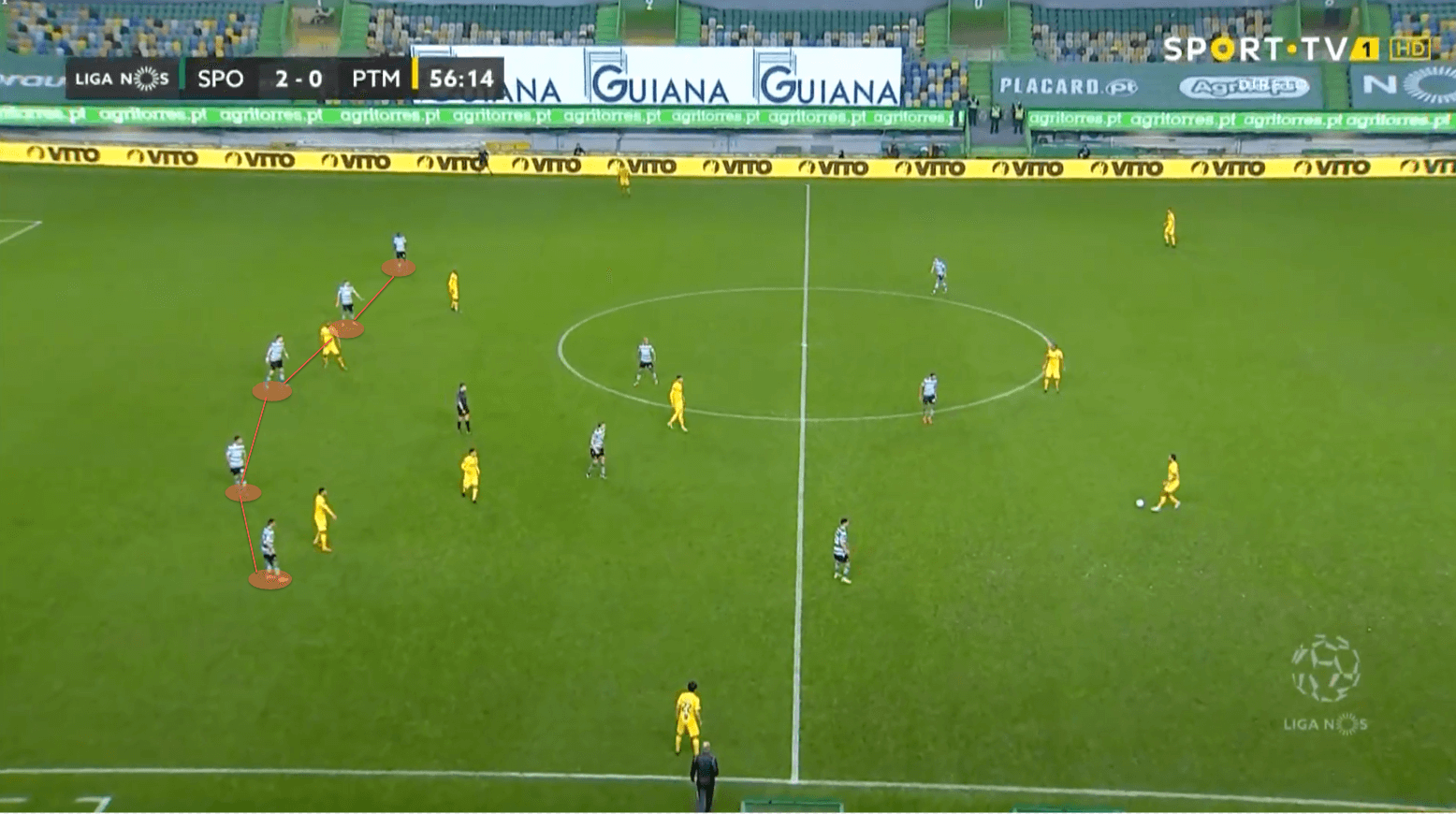 Some coaches would potentially feel initially uneasy with playing with two central-midfielders and pressing with a front three, alongside this compact back five. This tactical analysis will highlight the subtleties within this system that makes it work so well, and has led to Sporting having the best defensive record in Liga NOS this season, having just conceded 12 league goals at the time of writing.

One of the more well-known midfield threes with a back five comes from Antonio Conte’s sides over the years. Generally, Conte initially has his central-midfielders press the wide areas, allowing the wing-back to stay in place and preventing the ball in behind. 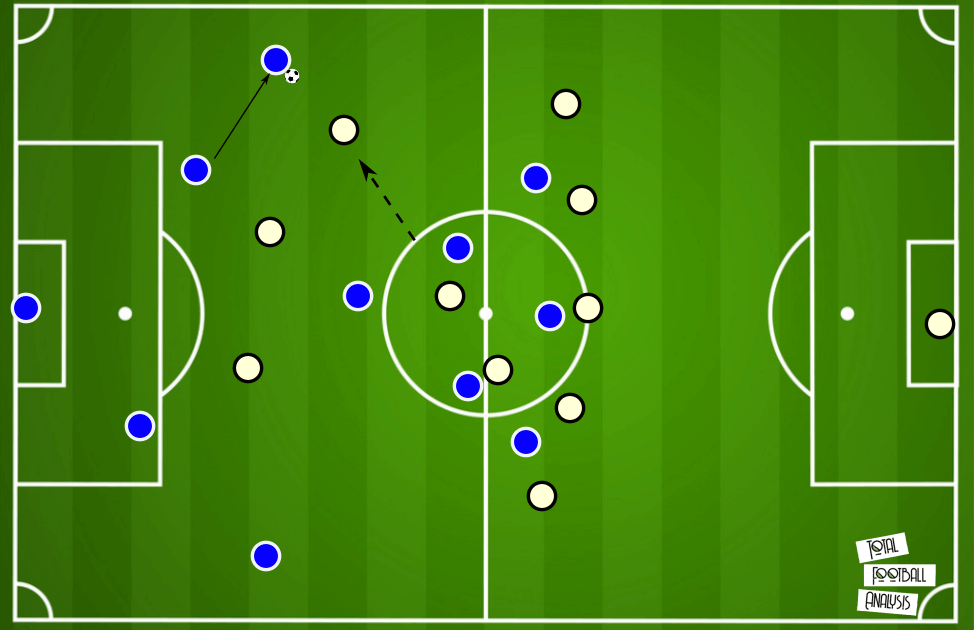 But, if the opponent switches possession, then it’s not realistic to expect a midfield three to continuously switch from side to side, and maintain an intense press whilst also remaining centrally compact. As the switch occurs the wing-back on the other side can then push up to press, allowing the midfield three time to switch across. 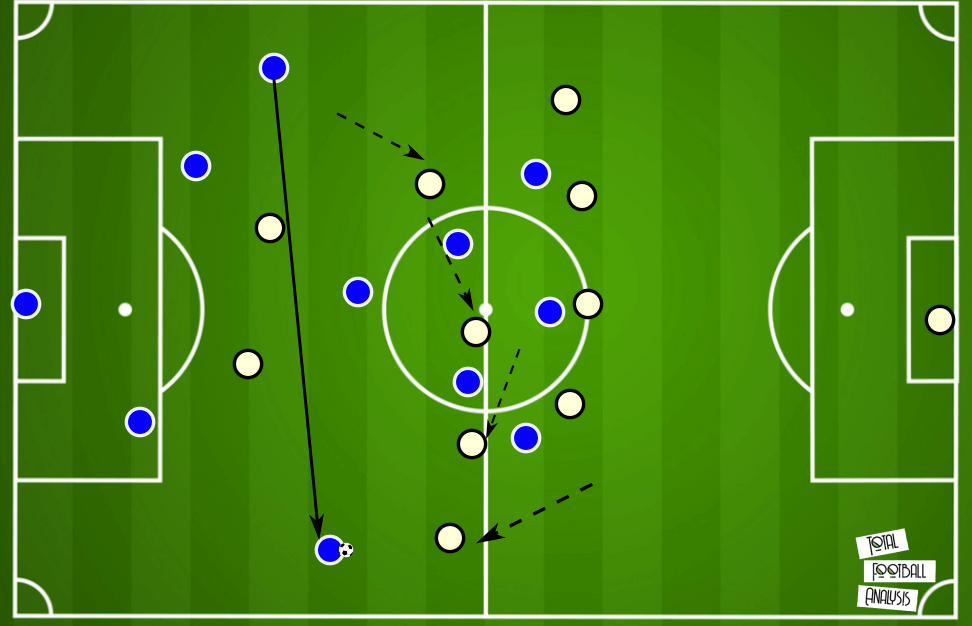 On top of this, we often see teams play with a midfield four sat in front of the back five. This could be a makeshift four with one or two forwards dropping into the midfield to give a solid midfield base. 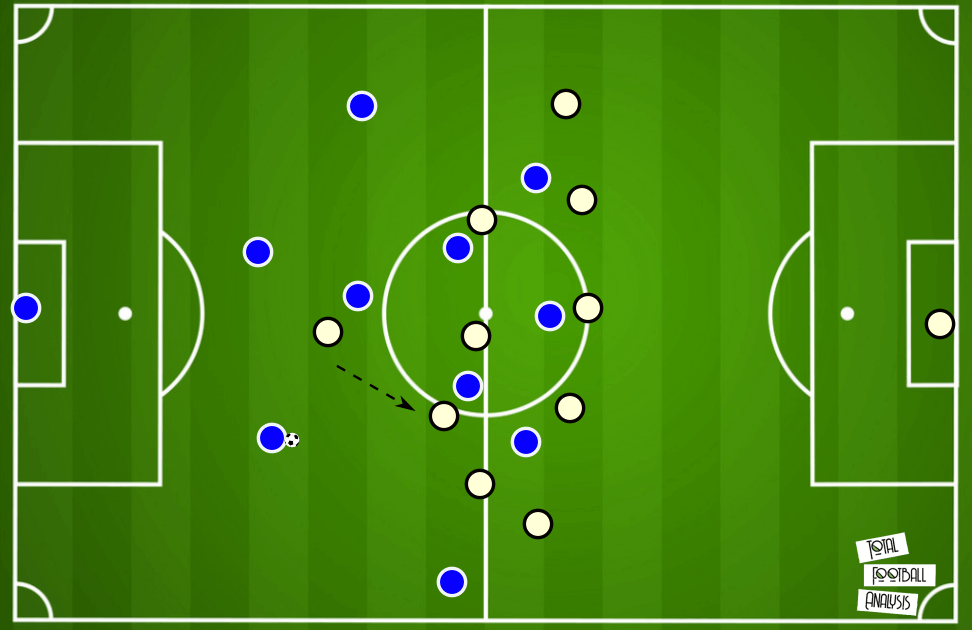 There’s no set way to press wide areas in this set-up. Some coaches will look to use the midfield four to keep the centre of the pitch unattainable for the opposition and so will have the wing-backs push up to press the wide areas and allow the midfield to stay central. 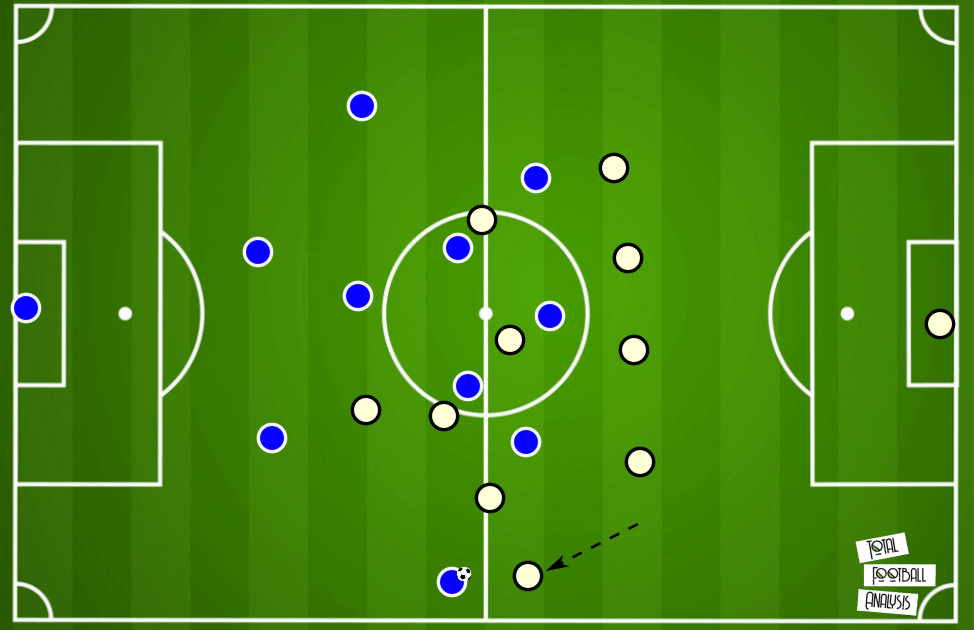 Whilst others will have the midfielders press the wide areas and again allow the wing-backs to stay back.

What is most common, however, is for the wide midfielders to press the opposition full-backs if the opponent beats the first line of the press. But, as the ball is advanced further inside the defensive team’s half, then the wing-backs might push forward to press. The midfield stays compact centrally to prevent any central passage for the opposition, and force them to either attempt to beat the wing-back and play down the line or recycle possession.

And so we come to Amorim’s set-up – a 5-2-3. Yet, rather than focusing on the formation, it’s more pertinent to analyse what their pressing principles are and how they look to structure their success in this moment of the game.

Sporting operate with a defined back five, and then a front three and midfield two, who, whilst there may be some distance between the lines in many instances, are nevertheless interweaved in ensuring certain areas of the pitch are protected and pressed.

Sporting do a terrific job of maintaining space occupation during the pressing phase. Poor pressing teams will leave space behind when they press, but Sporting’s players have an excellent understanding of where space could potentially be created and having seven players behind the front three gives them a strong shape to have players drop in when needed.

If the press is broken, and one of the central midfielders pushes out of the double pivot to press, then one of the forwards can drop in to fill the space.

If the play is focused down one side one of the forwards will follow it wide. 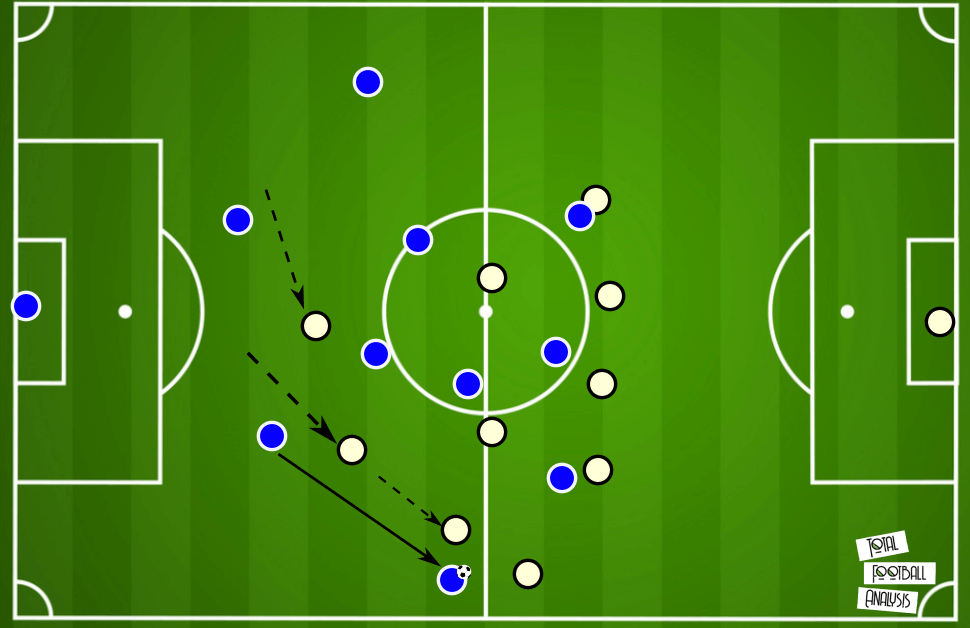 In these instances the opposition might look to circulate possession and work the ball to the other flank.

Sporting’s “front five” will simply rotate, with the now ball-near pivot shifting out to press the wing, with the wide-forward tucking into midfield. 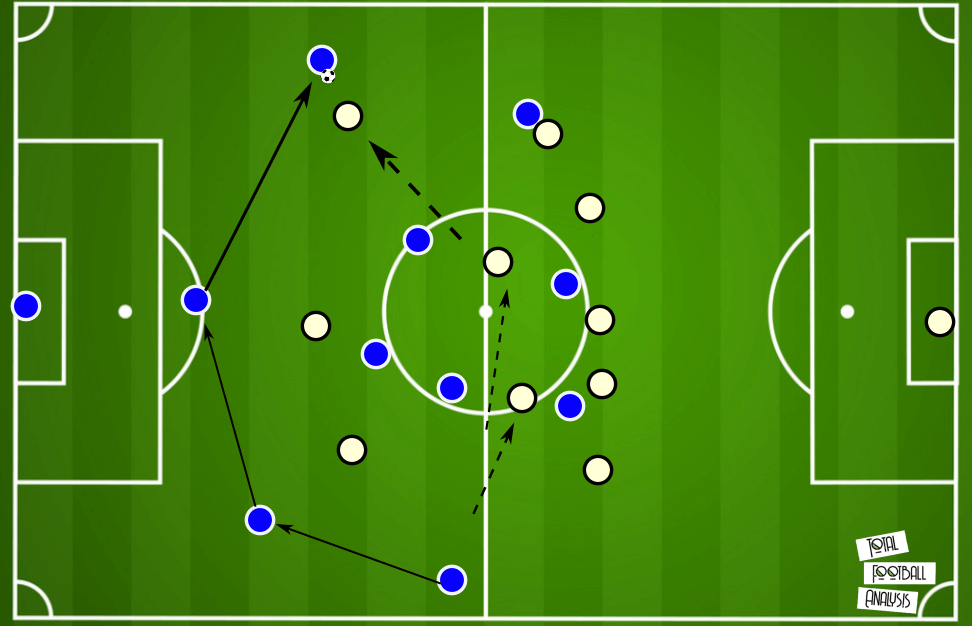 From goal-kicks, they start with a pretty large gap between their front three and the rest of the team, Sporting have quick, mobile players who do an excellent job at creating an aggressive second line of press when needed. 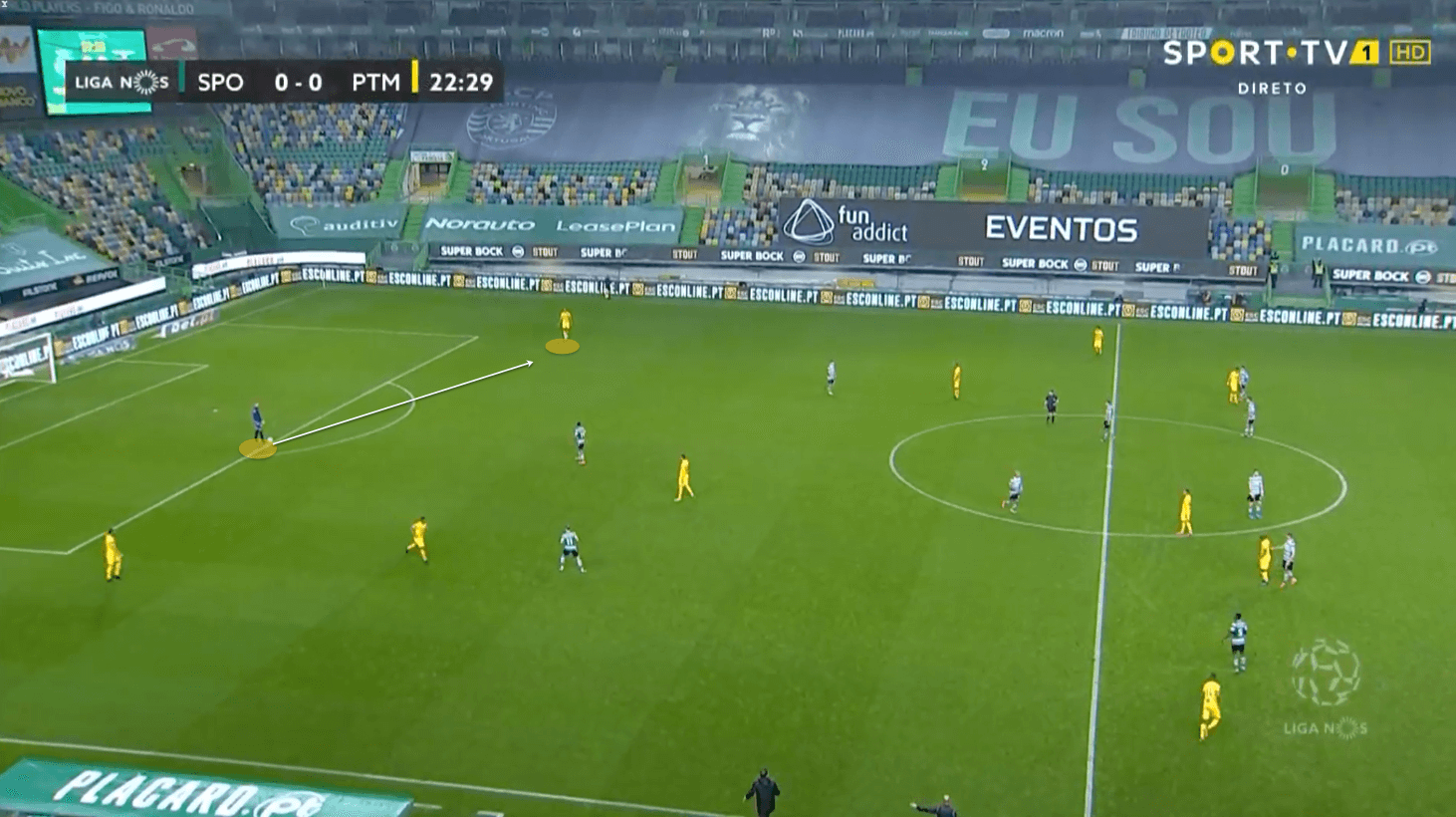 When the ball is played wide as it is in the previous image, they ensure the first line of the press is supported and the opponent doesn’t have an easy, short passing option beyond the pressing player.

We can see in the next image how quickly the right wing-back pushes up, as well as the ball-side central-midfielder in ensuring there isn’t comfortable possession for the opposition. Amorim also wants his backline to remain compact, which we will look at later, but to ensure they can stay relatively deep, the far-side pivot is already shifting across to cover the space between the backline and the second line of the press. 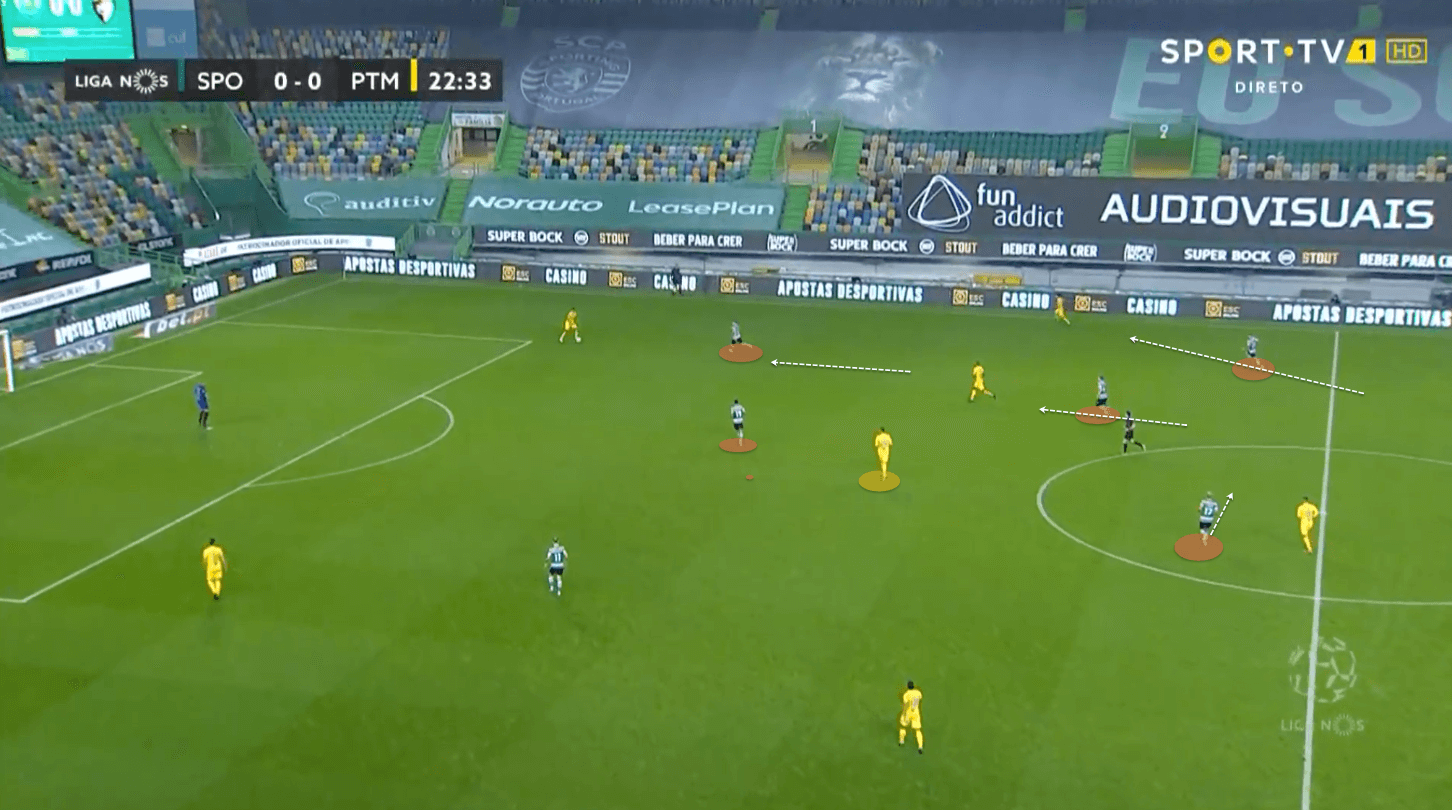 As the ball is played into the opposition full-back, any immediate short passing options are well covered by Sporting’s aggressive shape. They opt to play down the line, where Sporting are able to commit one of their three centre-backs to man-marking the striker, and still maintain a strong back three, thanks to the left-wing-back tucking around. 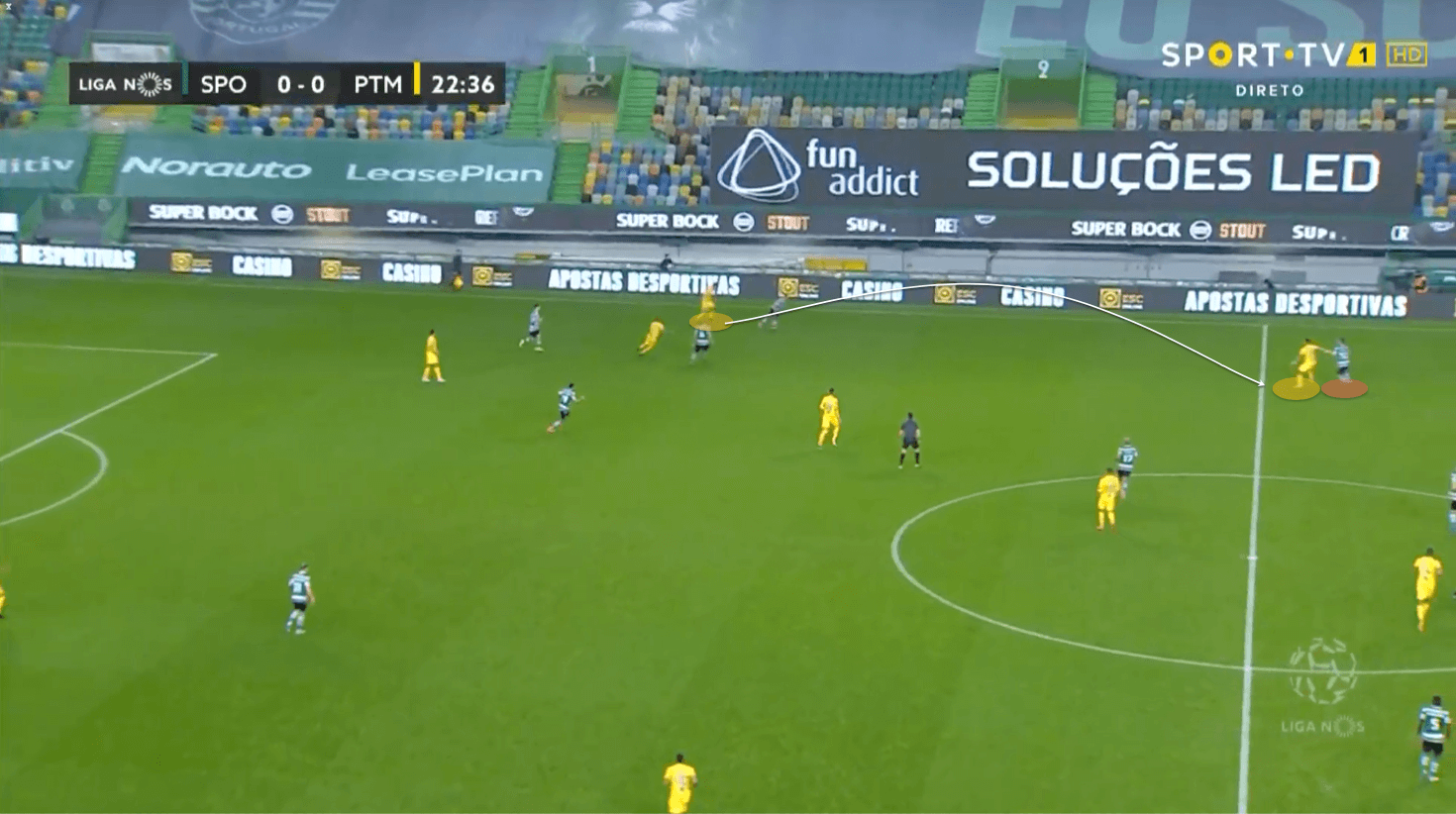 At no point during opposition build-up do Sporting allow them to have time and space to play past the press. Everything is focused on forcing them to make poor decisions on the ball and either making a mistake inside their own half, which Sporting can capitalize on, or playing the ball long where Sporting can begin their patient possession game.

Sporting’s front three press the entirety of the opposition backline, working as a unit and preferably filtering the opposition down either flank. To do this they remain narrow and as a result show them away from the centre of the pitch.

The remit of the front three is to prevent easy central passage for the opposition, and then show them wide before closing out any passing options. Sporting then look to commit players to these wide areas where they can overload the opposition and subsequently secure possession on transition.

In the next image we can see that as the opposition play out wide, the ball-near wide forward shifts across and shows the player down the line. This move is followed by Sporting’s right wing-back shifting across and forwards to pick up the winger in support, whilst the ball-near pivot shifts across too. We can see this pattern in the following image, whilst the far-side pivot begins to move across to fill the central space. 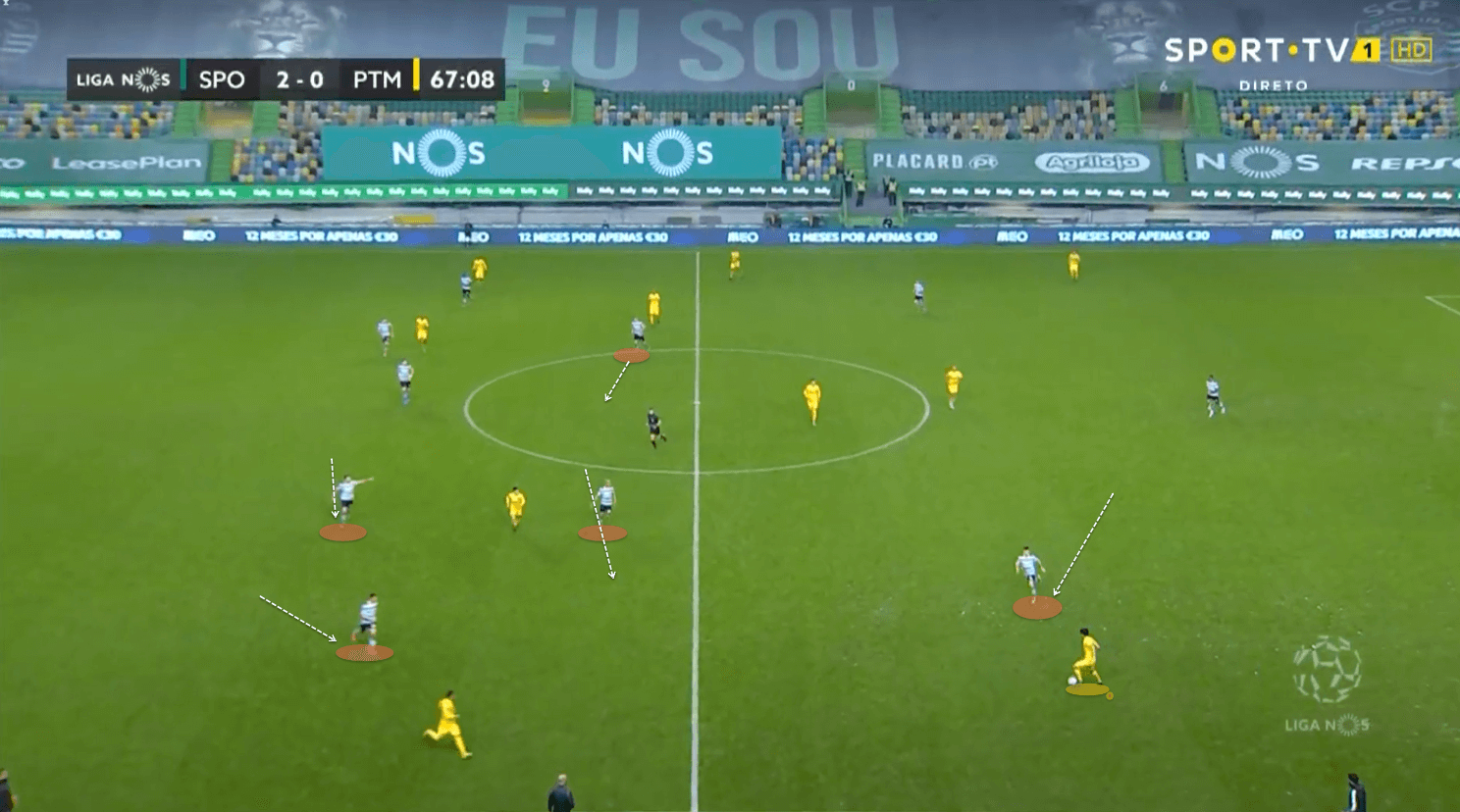 Finally the right-sided centre-back shifts too and there are four Sporting players surrounding three opposition players, Due to the pressure and positioning of the Sporting players, the ball-carrier is trapped and gives away possession. 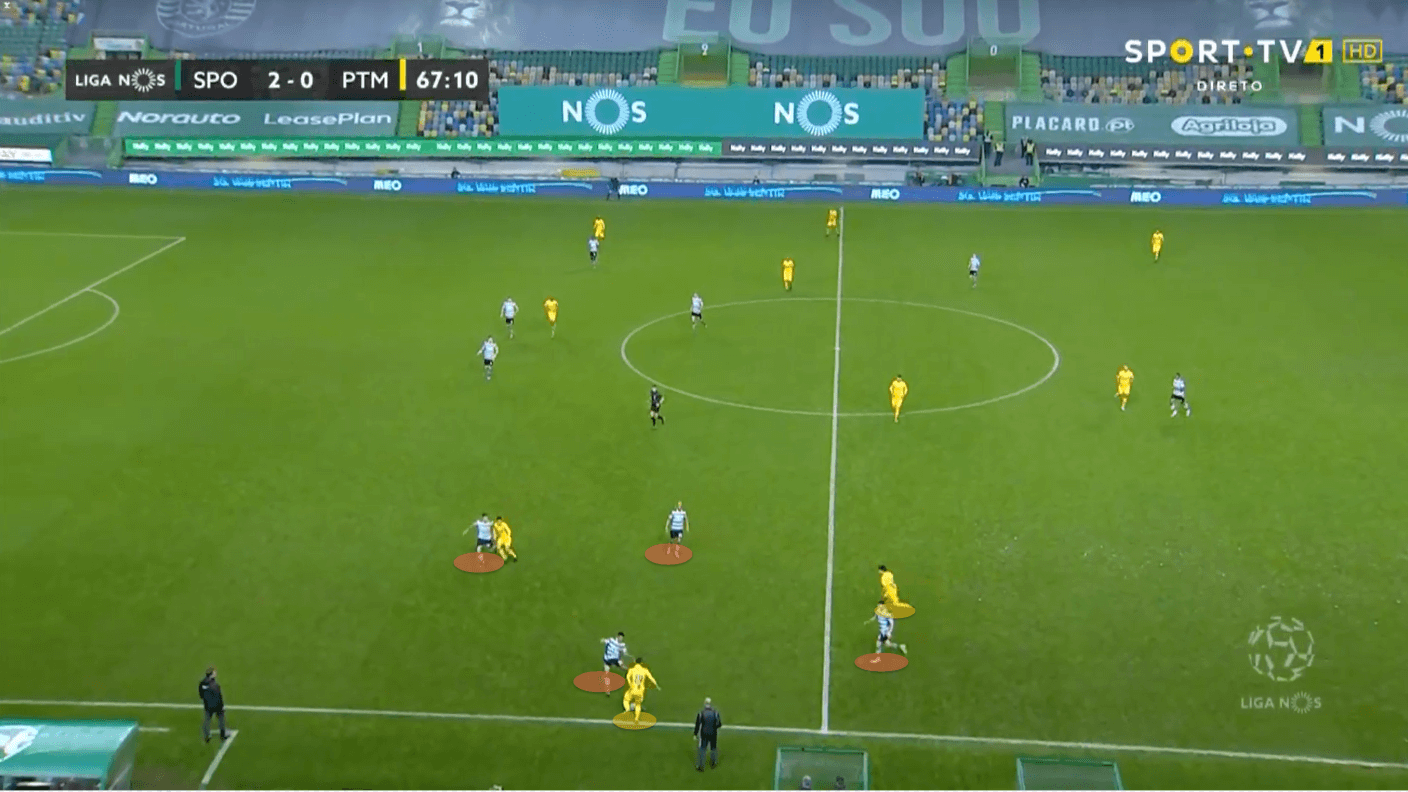 When the ball is turned over these four players can combine, or simply find the free player in the 4 v 3 to play out, as we can see in the following image. It should also be noted that there are two Sporting forwards left in a 2v2 with the opposition centre-backs. A quick break in this scenario creates an excellent counter-attacking opportunity. 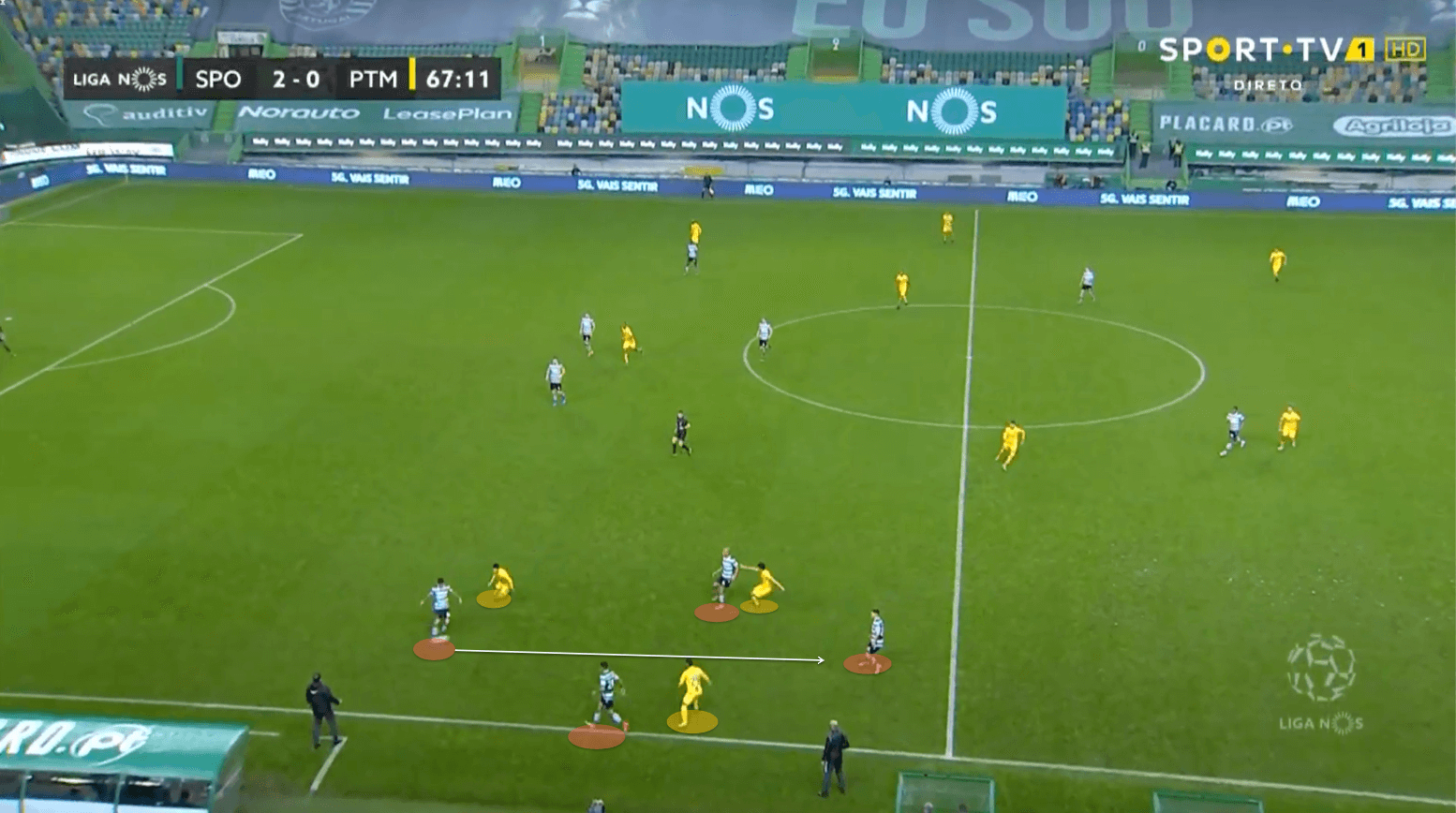 Preventing space for the pivot

Whilst the front three aim to push the opponent out wide, the double-pivot have to be ready to react. They initially start deep, giving Sporting fantastic protection against any long balls forward, but they also need to be ready to move laterally across the pitch, to create the kinds of patterns shown previously.

However, they have to be ready to push up to cover the opposition pivot as well. Sporting’s front three will initially cover the pivot with their cover shadow, however, Sporting’s pivots are ready to quickly cover this space. 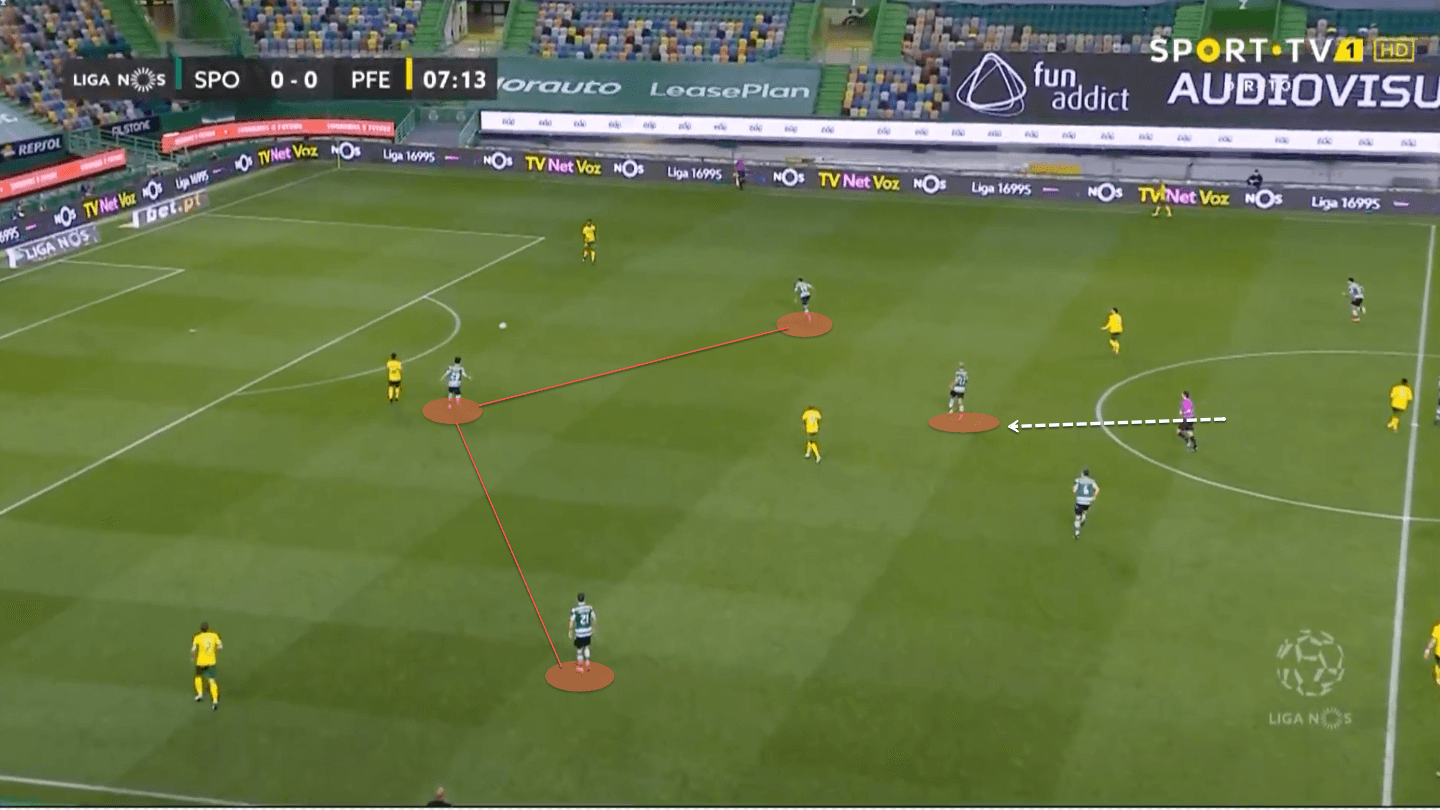 When this happens Amorim wants to maintain protection in the centre of the pitch. Similar to how the three forwards and double pivot work in tandem to fill gaps when Sporting press, Amorim’s side do likewise to cover the opposition pivot.

Depending on ball location one of the defenders will drop in to cover the pivot pushing forward. If the ball is out wide, the far-side wing-back will drop inside to keep a double pivot. 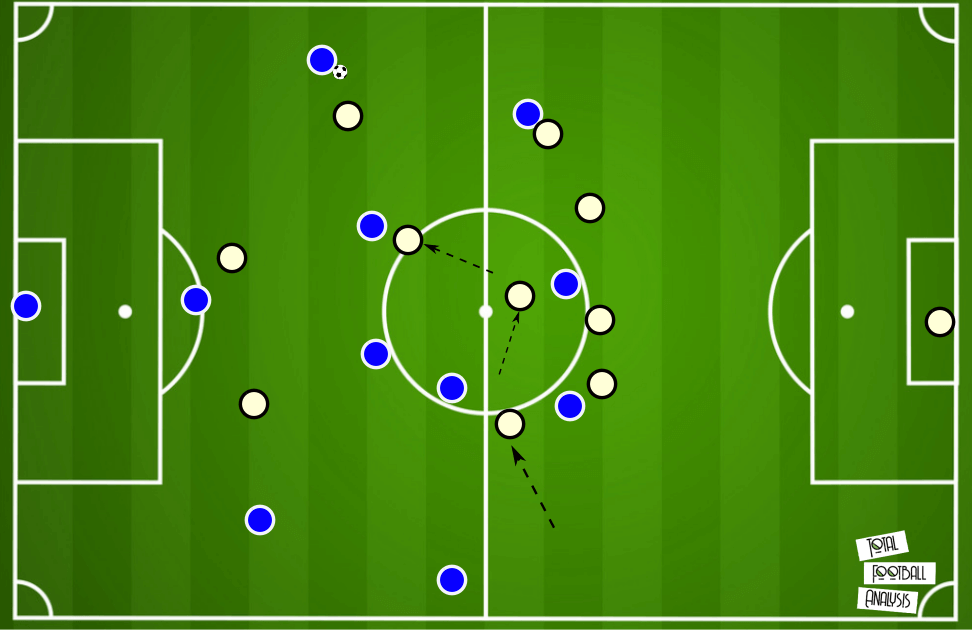 Otherwise the centre-backs are given the freedom to drop into this area. 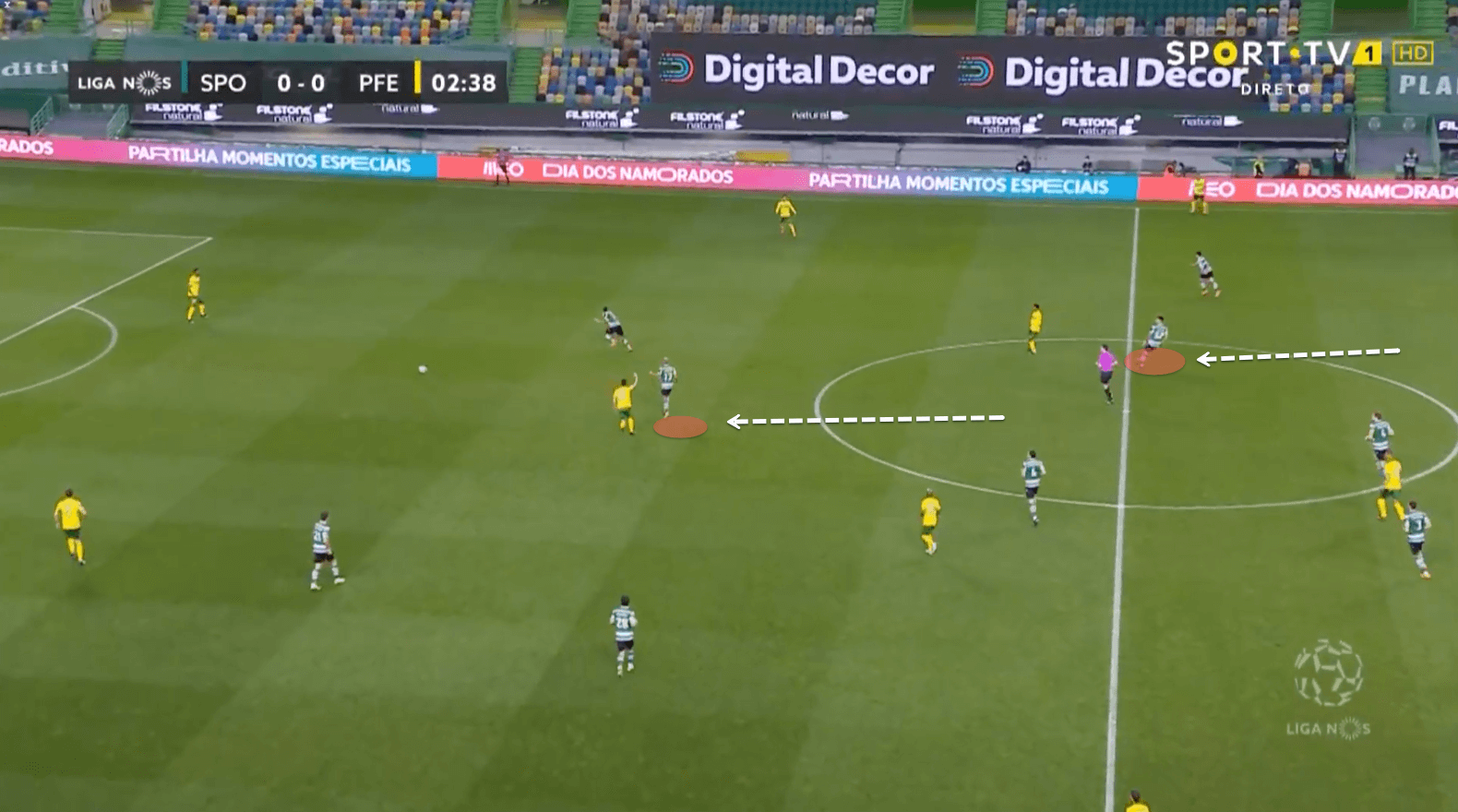 As alluded to in the introduction, Sporting have a fluid defensive shape and are more concerned with protecting specific spaces. There aren’t necessarily players assigned to roles. Just as either of the pivots might drop in to pick up the pivot space, the forwards will too.

In the following image as the ball is worked wide, Sporting’s centre-forward sees that the Portimonense pivot is shifting across and is in space, and with both of Sporting’s pivots unable to cover this space, he is able to drop in and cover. In doing so, Sporting continue to prevent an easy way out as the Portimonense right-winger has possession on the flank. 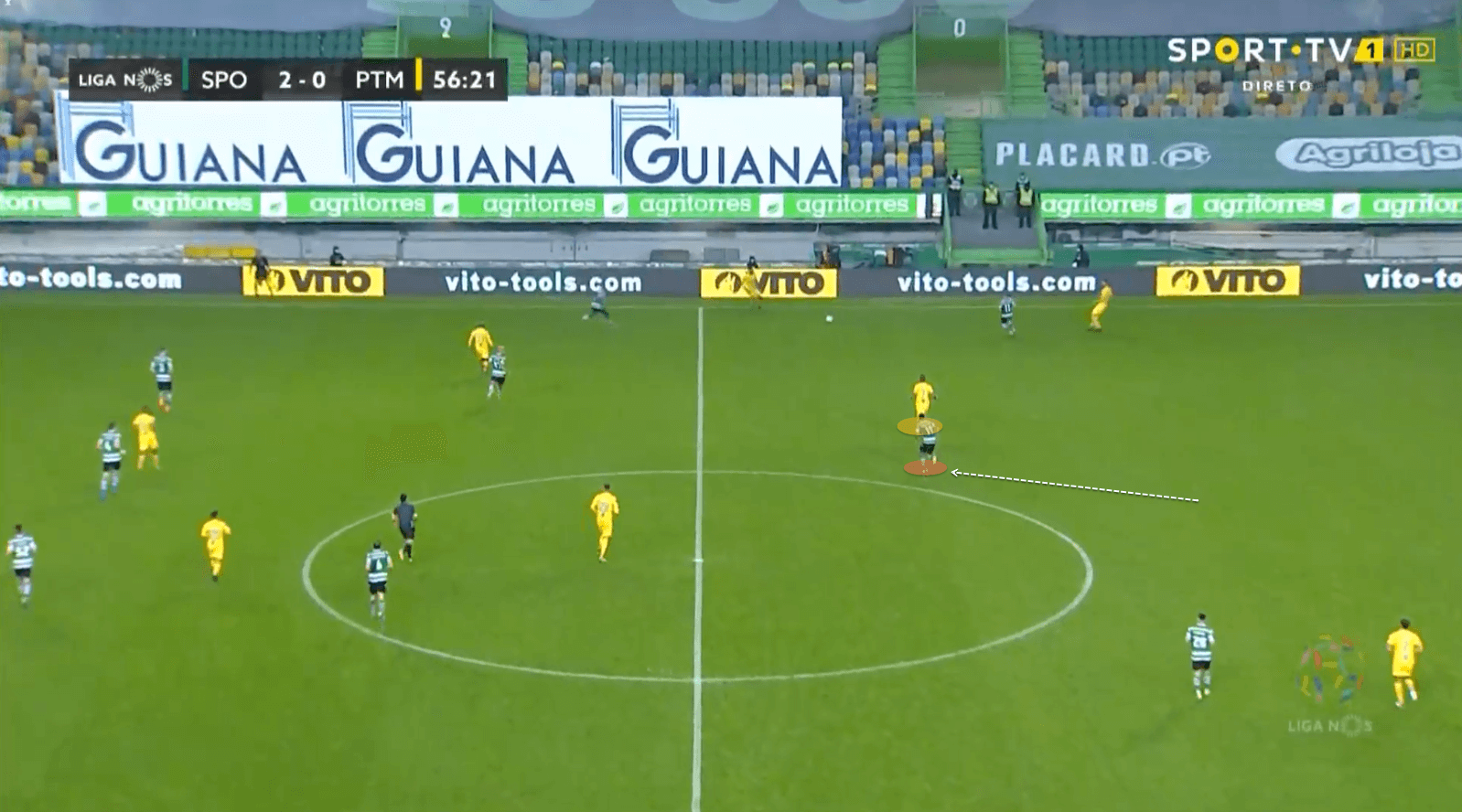 Similarly, any of the wide forwards can drop in to pick up the pivot, and allow Sporting’s own central-midfielders to remain in position. 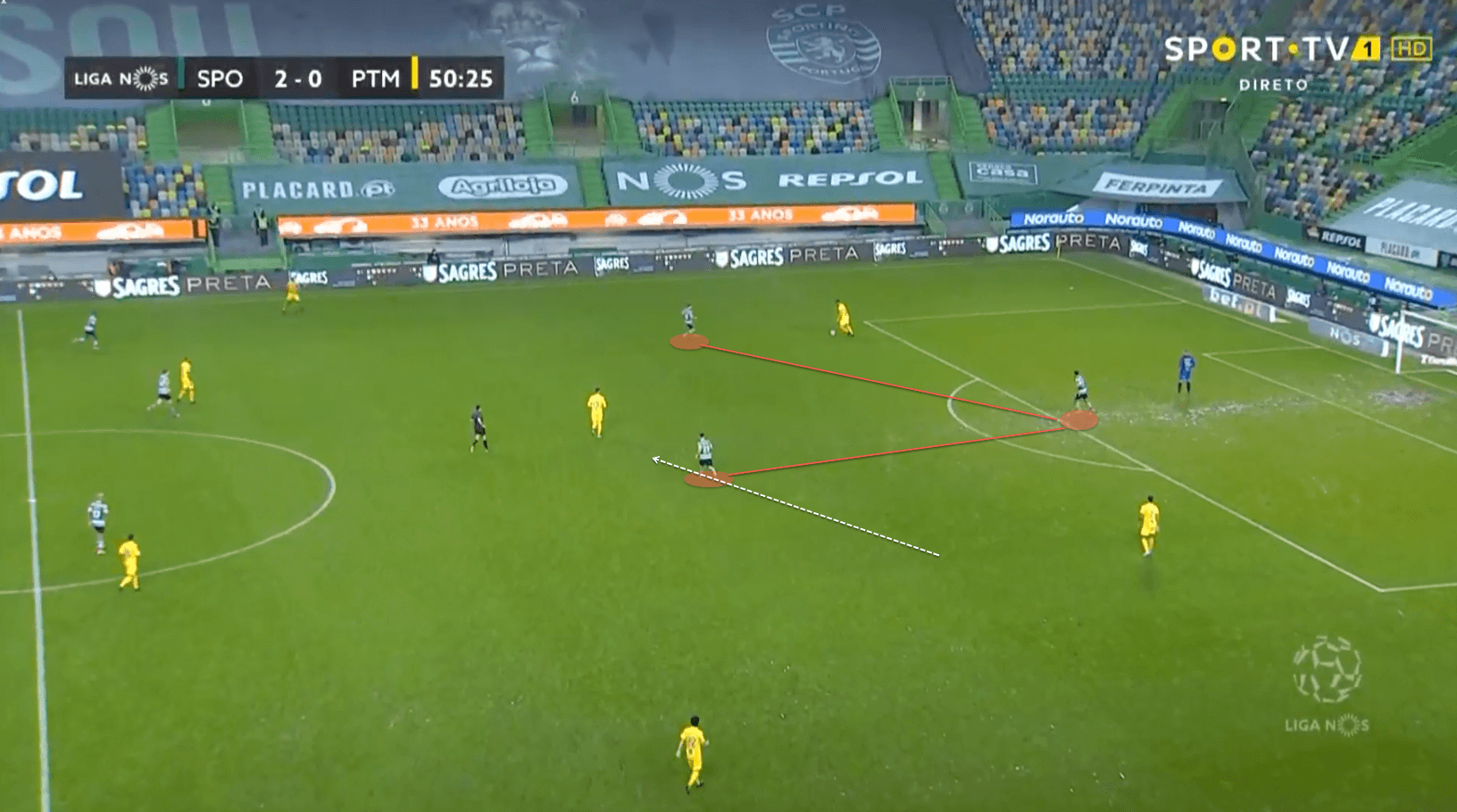 No passes in behind

Unless the opponent have a player floating beyond Sporting’s first line of press, there’s no need to play with anyone in this space, and Sporting will happily play with a very reserved shape behind this front three.

As we can see in this image, the front three man-mark the opposition back three and therefore, force the opposition to play long. With the opponent having two wide players hugging each touchline, Sporting have a 7 v 5 overload in the centre of the pitch on the halfway line, and have the upper hand in the aerial duel and on the immediate loose ball duel afterwards. 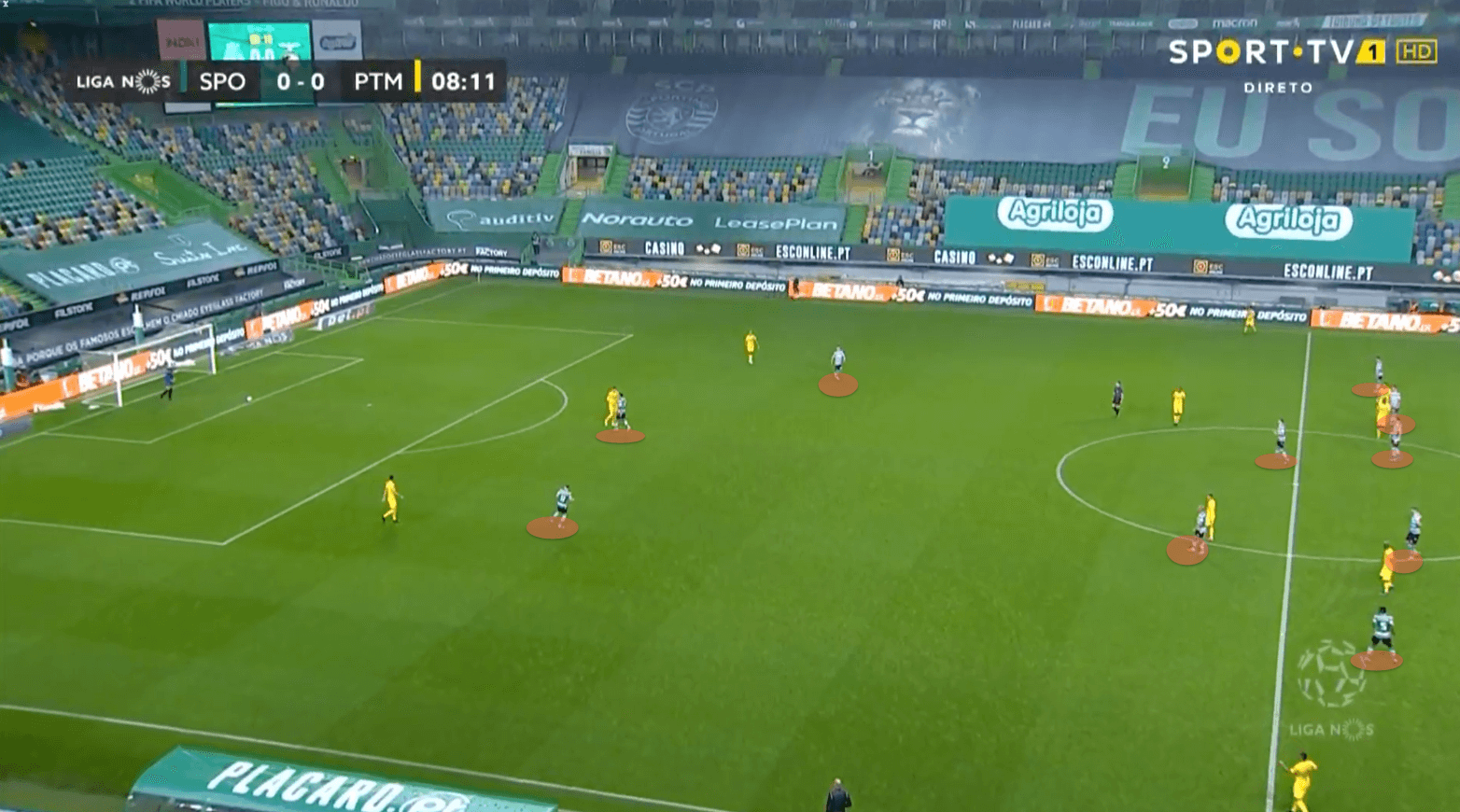 Whilst their wing-backs will press the wide areas, they stay deep and compact until that pass is played. The aggressive press of their front three, and mobility of the double pivot pushes the opponent to play long, or play wide. If it goes wide, we have seen how they shut off any passing options, and if they go long this five have the upper hand.

Their ability to cover the width of the pitch also prevents any through-pass that isn’t an aerial ball. If the opponent does break through the press in a central area, the immediate pressure from the centre from one of the pivots, and Sporting’s back five covering any potential gaps for a quick pass in behind, makes it very difficult for them to be broken down.

Sporting show that if a front three work well together as a unit and maintain an intense press, then wingers or significant numbers in central midfield aren’t necessarily important in a defensive system.

Sporting instead know they can force opponents into areas of the pitch where they can significantly reduce their chances of building up in a way that the opposition have planned to. They can lead them into wide areas where they shut off any potential passing options and either turnover possession or force the opponent to play long.