Over the last few years, German football has emerged as the most attractive destination for young players from all over the world, and especially from England. Clubs in Germany are a lot likelier to give a young player a chance in the first-team than their English counterparts, and this has been seen with the likes of Jadon Sancho, Jude Bellingham and Jonjoe Kenny, among others, in recent seasons. Thus, it is not surprising that a number of young players across England see German clubs as a viable option to continue their development, and the latest example of this seems to be Omar Richards, the 23-year-old Reading left-back, who is seemingly on his way to Bayern Munich upon the expiry of his contract in the summer.

Richards is being seen as backup for Alphonso Davies at the Allianz Arena, as he offers similar traits to the Canadian. This scout report will look at Richards’ performances so far this season to try and understand his playing style, and whether he can be an effective understudy to Davies at Bayern.

Richards is a left-footed player who primarily plays at left-back, although he has been used higher up the pitch, as a wing-back or even a winger, on occasion by Reading this season. He is 6’1” tall and weighs 69 kgs. He has made 38 appearances for Reading across all competitions this season, having played 3234 minutes at the time of writing, which shows how durable he is and how important he has been to the Royals. 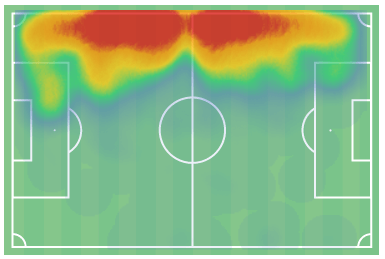 His heat map for the season shows how he primarily plays out wide on the left touchline, encompassing the entirety of the flank from the defensive to the offensive third. Being left-footed, Richards is very much a traditional full-back in that he stays wide and supplies width, looking to overlap beyond his winger and cross or pass into the box. On occasion, he will underlap and move infield as well, but this is certainly not a frequently-seen move – as we will see further in this analysis, the Reading full-backs are tasked with staying wide as far as possible. He is quite fast, and uses this pace to get up and down the pitch quickly, and is therefore well-suited to playing in a team with a high-tempo playing style.

We will now look at Richards’ traits and tendencies, both in and out of possession.

As mentioned previously, Richards will stay wide on the touchline as much as possible to stretch the opposition defence and create space infield for the Reading attackers. In case the opposition stays narrow, this creates room on the outside for the 23-year-old to advance down the flank. He stays wide during Reading’s build-up as well, receiving passes on the touchline from the goalkeeper and centre-backs before attempting to progress upfield through a pass or a run. 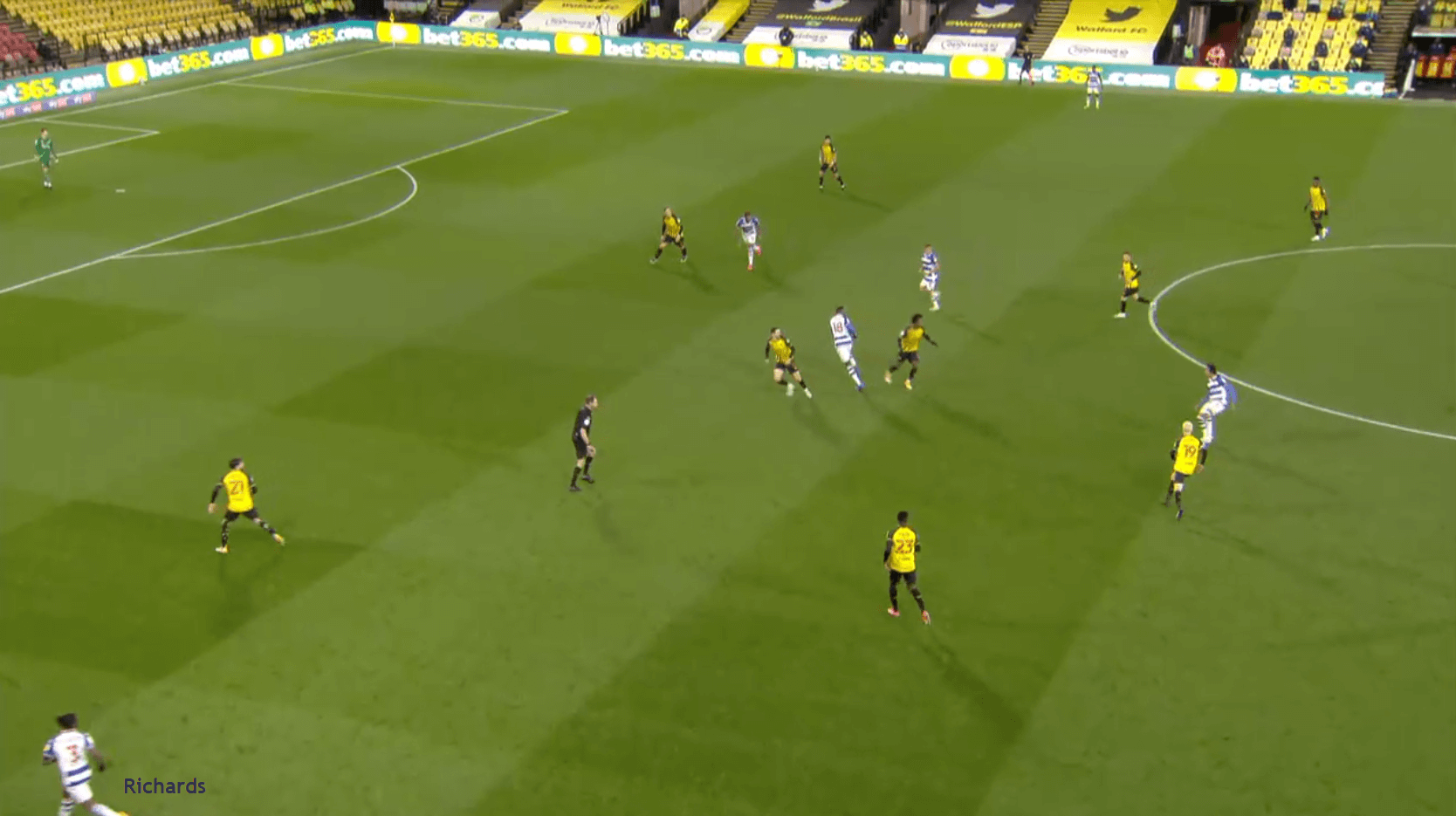 Richards, at the bottom left on the image, is extremely wide, and these are the sort of positions he usually takes up when Reading have sustained possession.

In this regard, one of his favoured traits is to attempt passes infield to midfielders and attackers making forward runs from his wider position near the touchline. 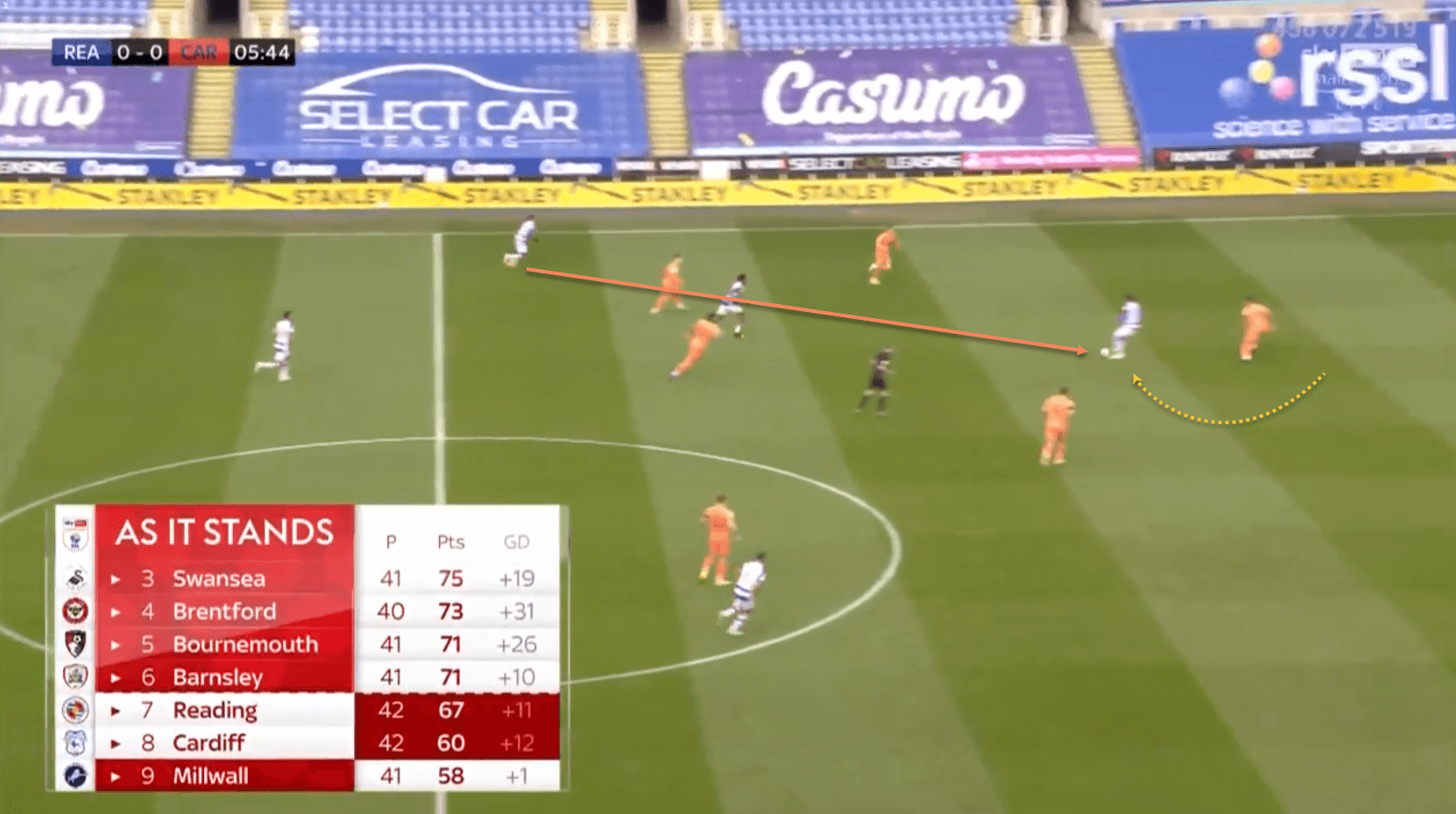 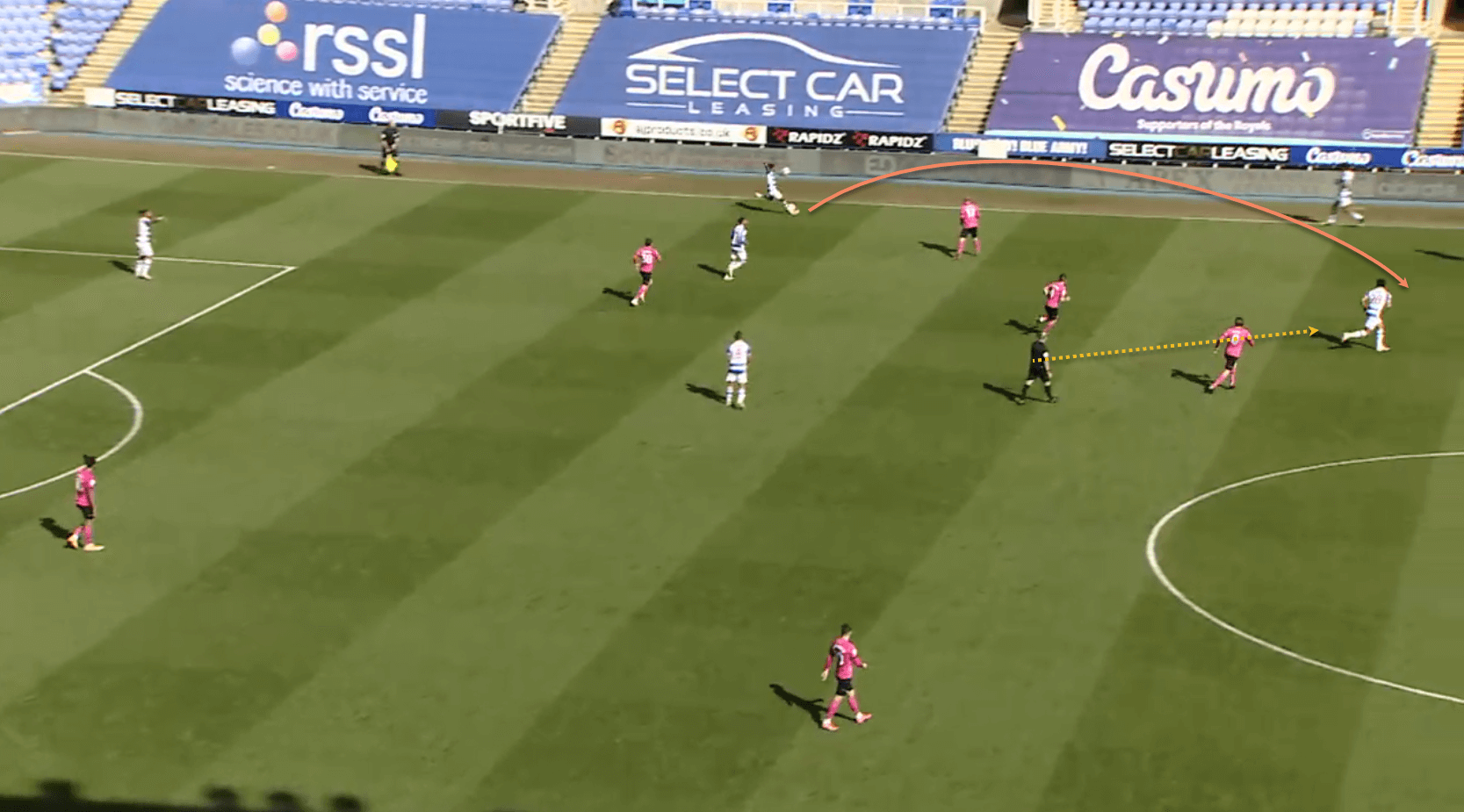 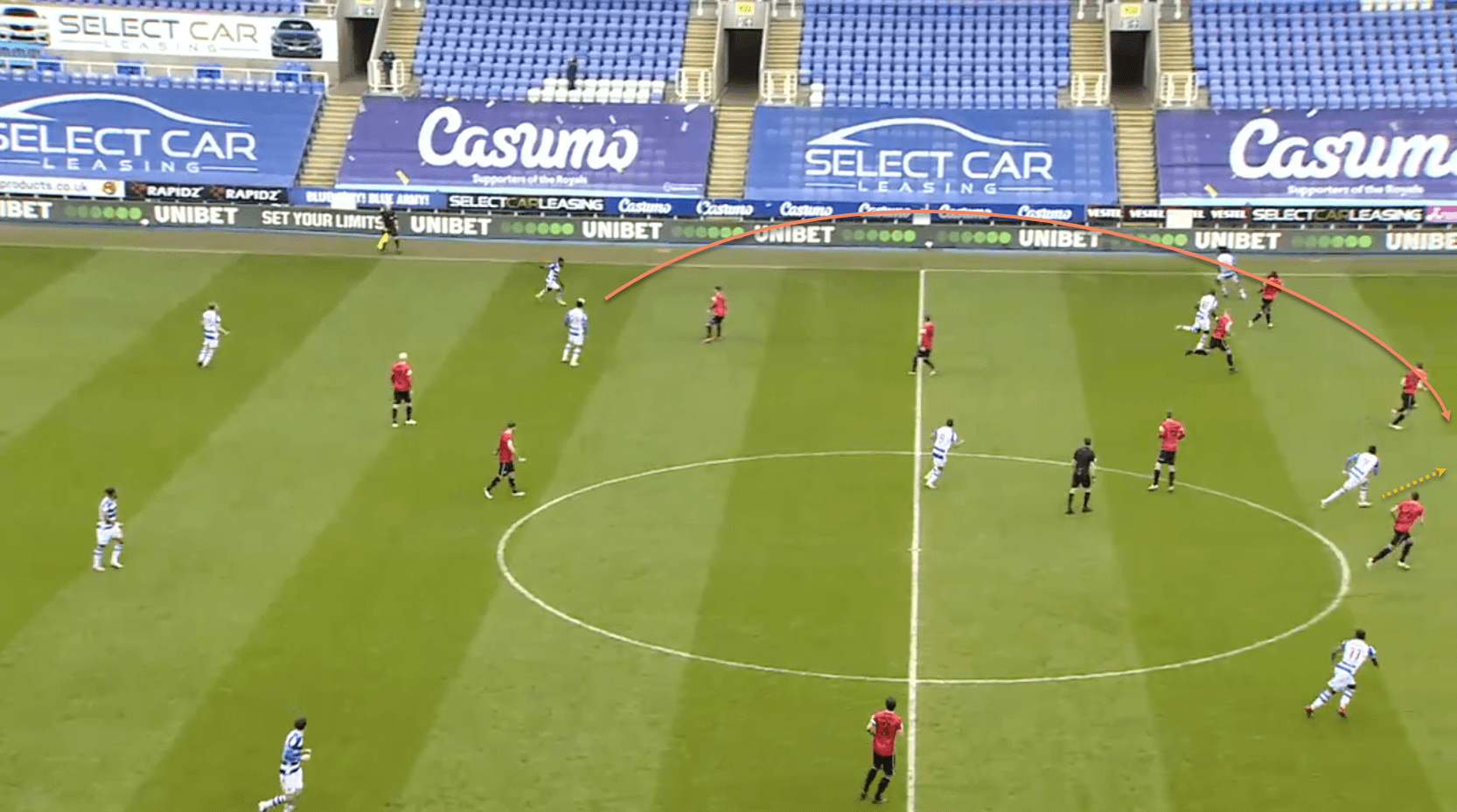 As we can see from these images, Richards will try to play driven passes ahead of his teammates in central areas from a deeper position in his own half, or even when he is a little advanced and around the halfway line. These sort of passes are useful at breaking the opposition’s press, as well as quickly advancing the ball up the pitch. In general, Richards has averaged a success rate of just under 79% with his passes this season, making 43.41 of them on average per 90 minutes, which shows that he does not retain possession especially well. If he does make the move to Bayern this summer, that figure will have to improve markedly, given that the Bavarian giants regularly average around 60% of possession in their matches. 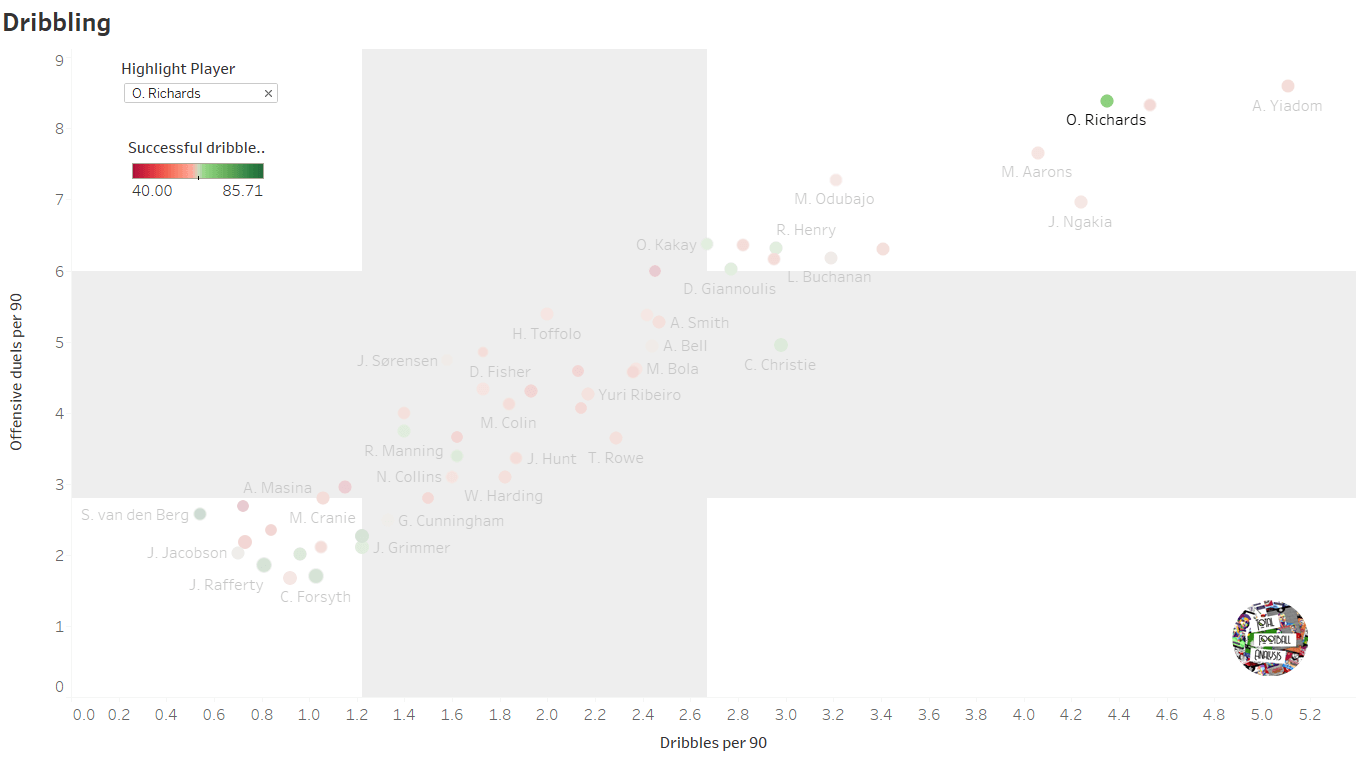 Richards has averaged 4.35 dribbles and 8.39 offensive duels per 90 this season, with a success rate of 66.45% and 51.84% respectively. We can see from the chart that he is one of only a handful of Championship full-backs who are in the upper quartile for both dribbles and defensive actions per 90, and his success rate for both of these also shows how good he is in 1v1 situations. 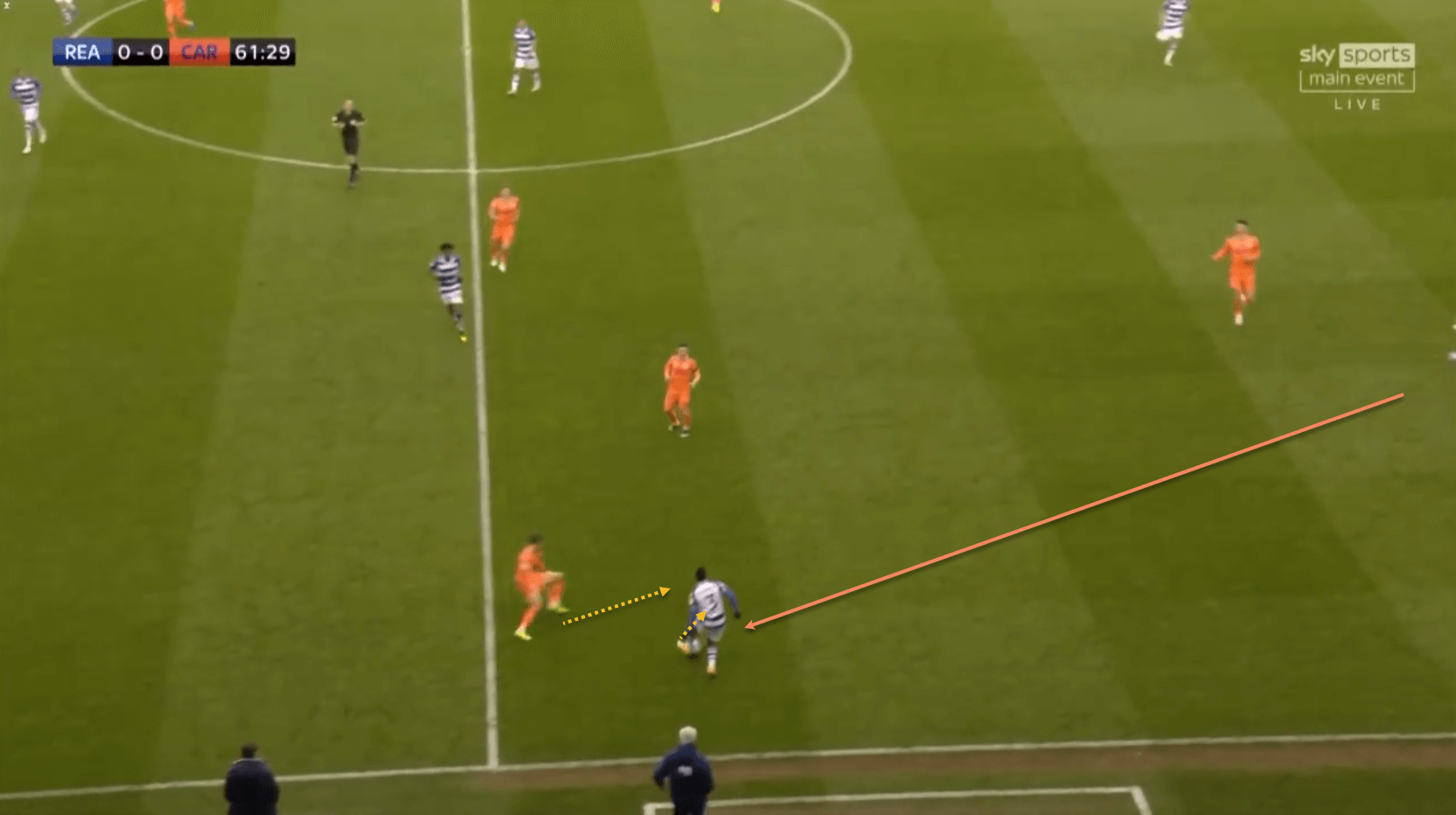 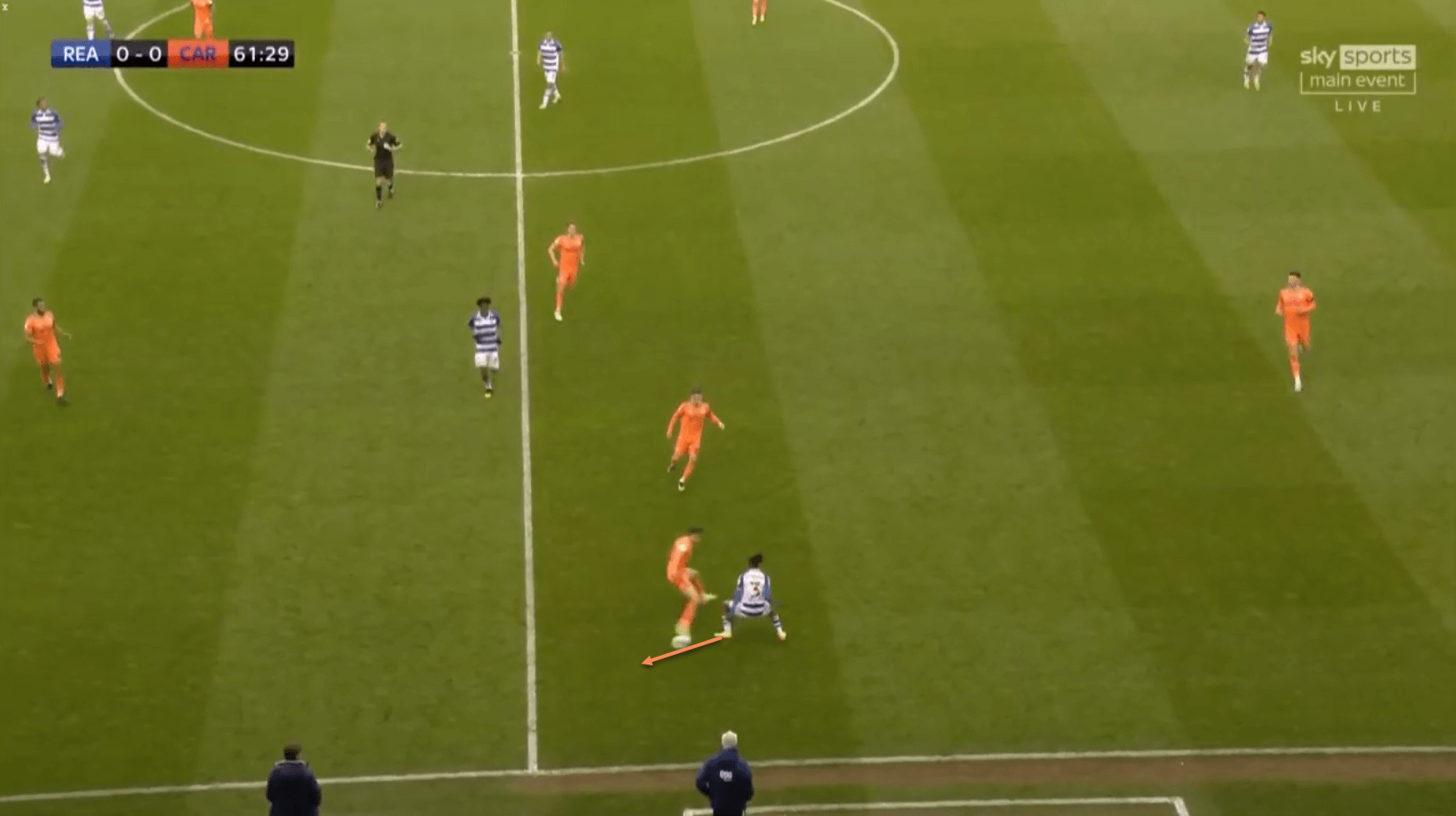 These two images are just one example of Richards’ ability to get away from players rapidly. He receives the ball from his teammate on his left foot, with the opposition player closing him down quickly. Richards’ first touch takes the ball inside, and as we can see from his marker’s body positioning, this makes him move infield as well. However, his next touch, with the outside of his left foot, moves the ball back out wide and into the space that the onrushing player has just vacated, and the 23-year-old is able to surge past him as a result.

As stated earlier, Richards looks to get into crossing positions out wide, and as the next chart shows, he does attempt a fair number of crosses from open play. 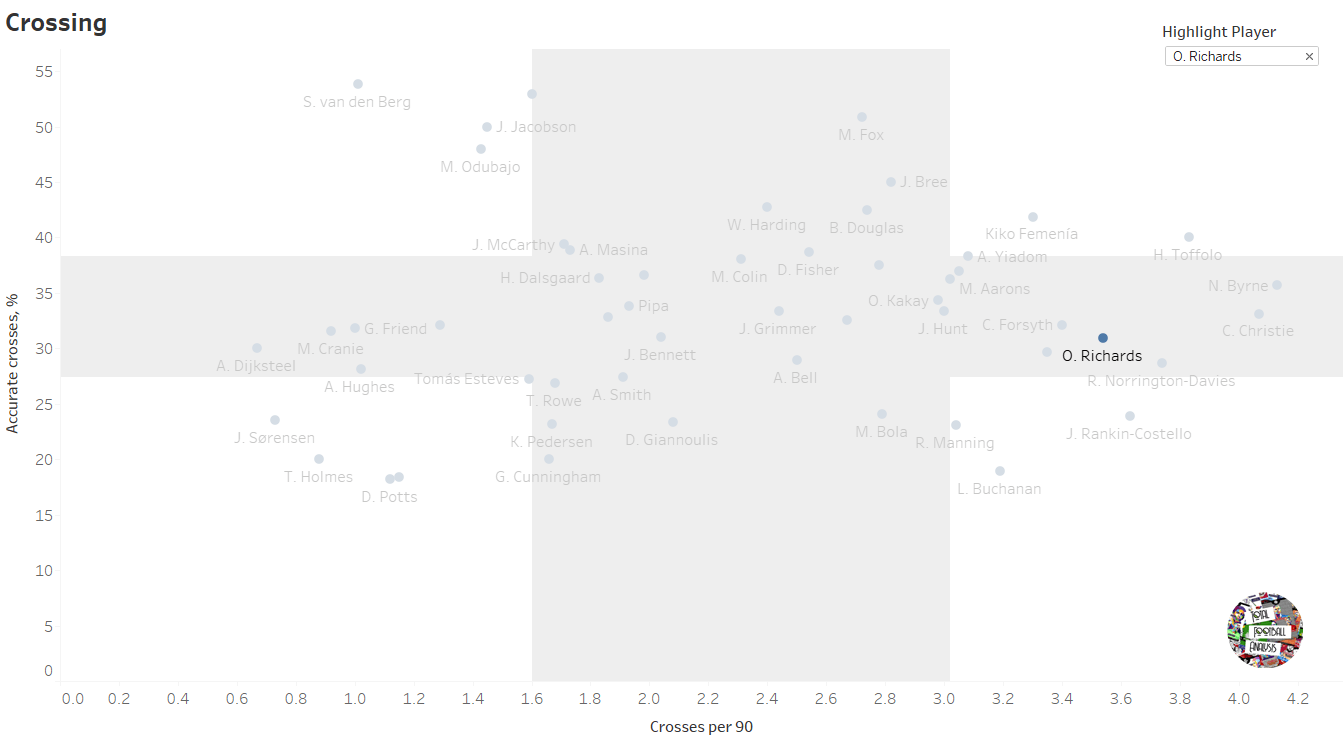 Richards has averaged 3.54 crosses per 90 this season, with an accuracy rate of 30.95%. This puts him in the upper quartile among Championship full-backs for cross attempts, while he is around the league average for success rate.

He attempts crosses from all parts of the opposition half, whether from deeper positions or higher up near the byline. He also has a number of deliveries in his repertoire, from whipped crosses to driven balls into the box as well as chipped passes, although he does need to improve his awareness of his teammates’ positioning and movement in order to find them more often. 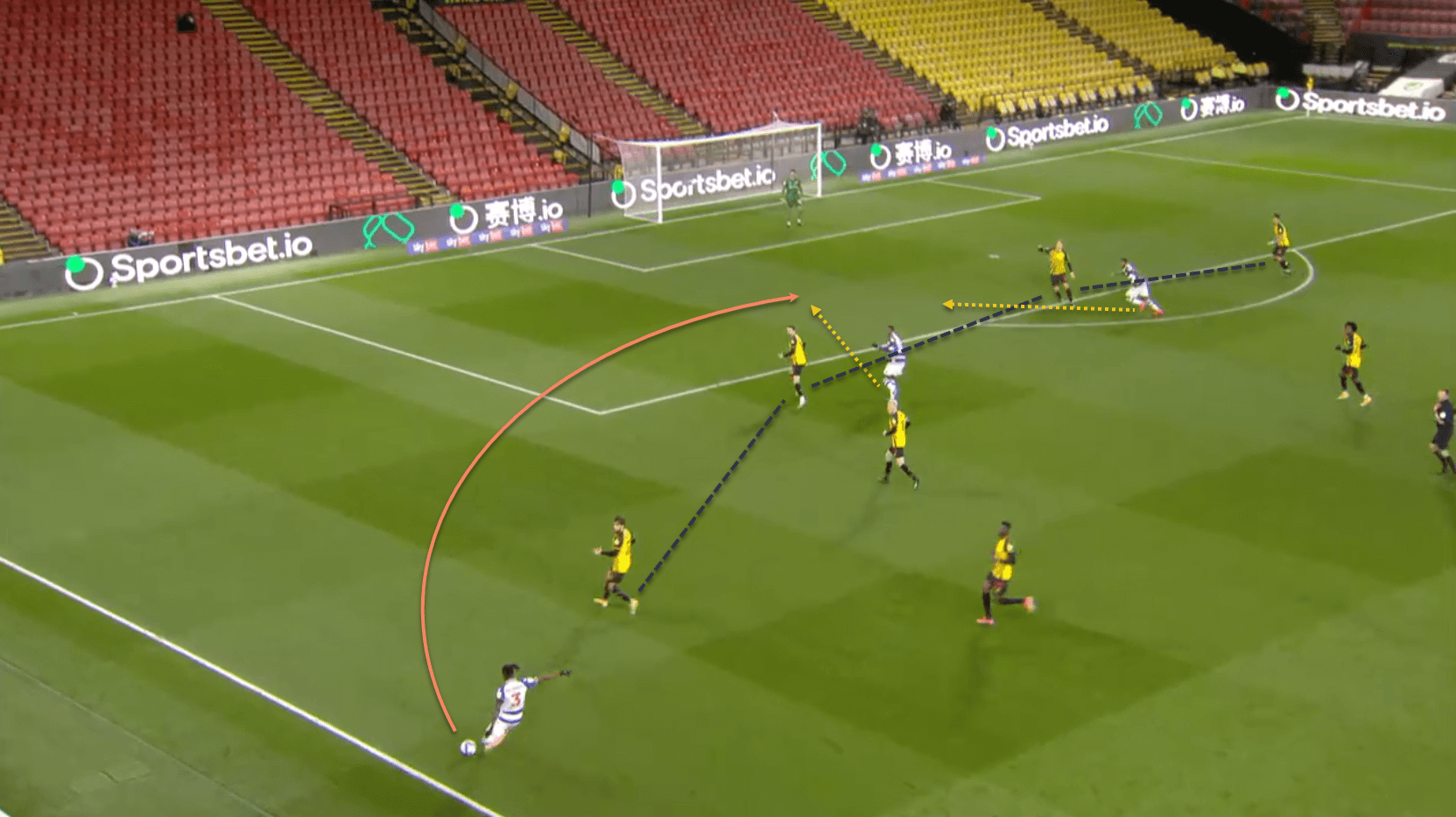 This is an example of a well-executed cross from a deeper position – Reading have two players attacking the box and have therefore managed to isolate the two opposition centre-backs, so Richards sends in an early cross into a dangerous area where his teammate wins the header and is able to set up a decent chance. 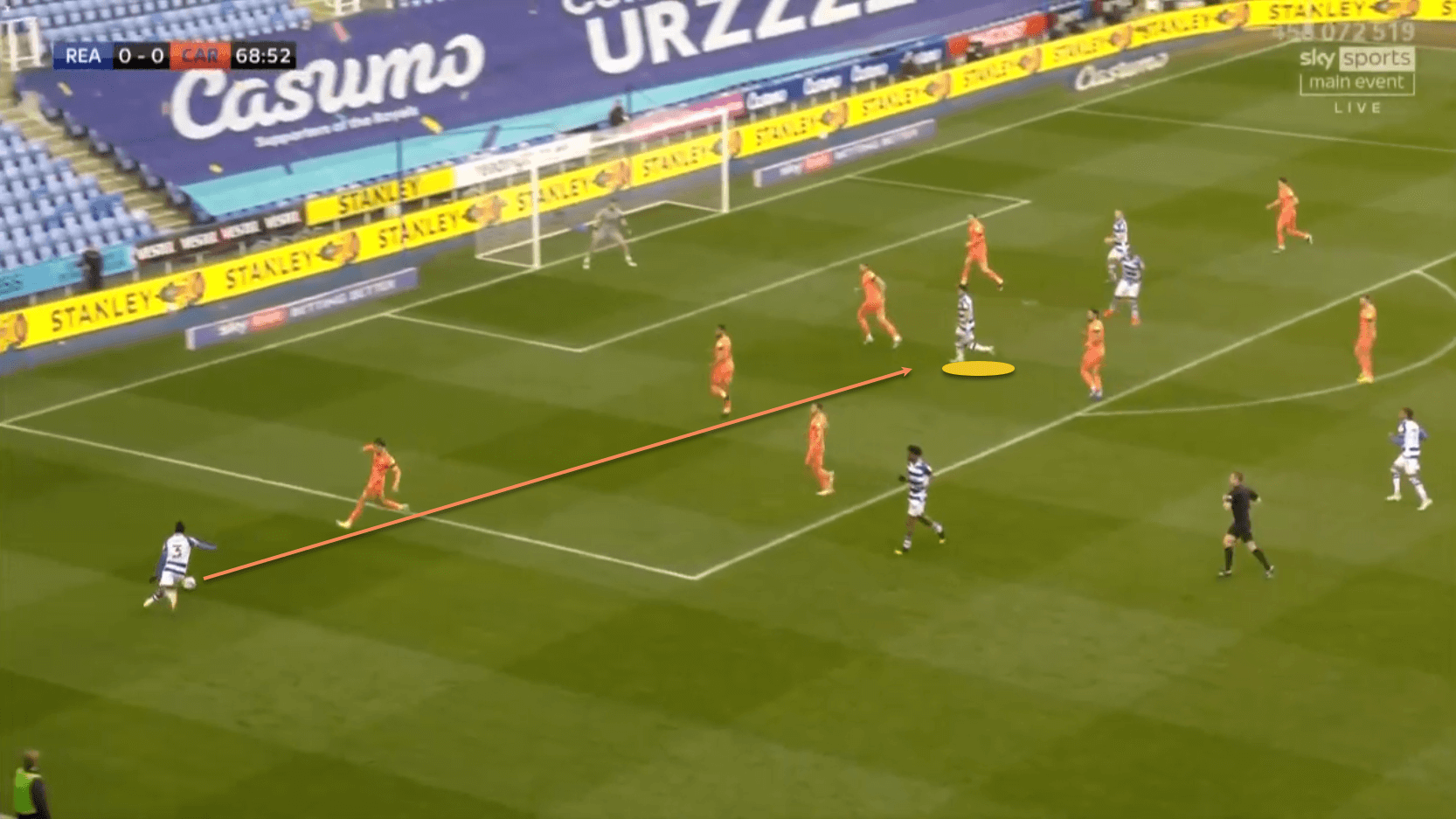 Here, he shows good awareness to find his teammate in the box with an accurate low cross, delivered first-time. 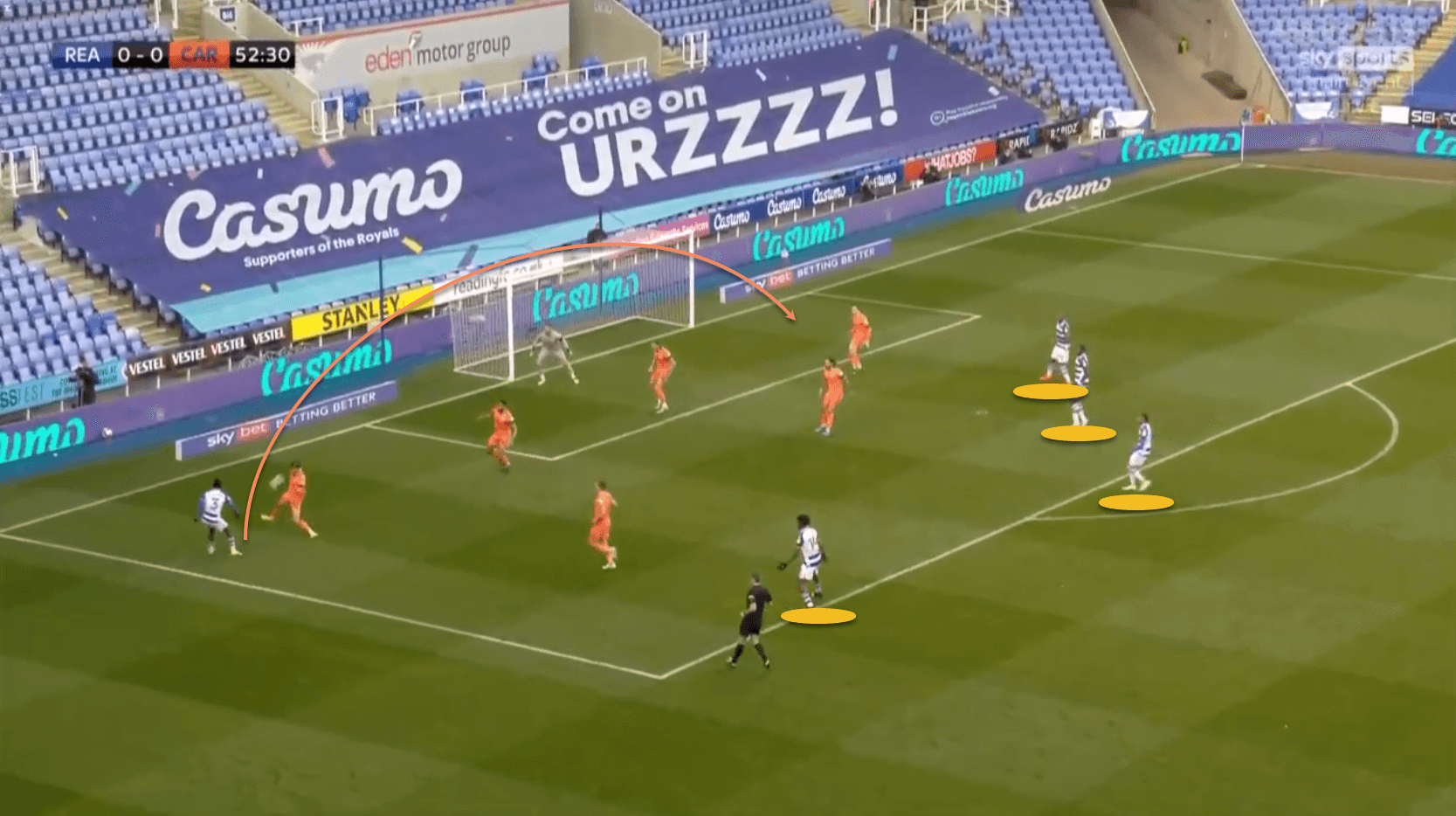 However, this is an example of the lack of awareness we mentioned earlier. Despite having two teammates near the penalty area, and two others on the edge of the box, Richards chips a ball into the six-yard box where there are a number of opposition defenders to deal with this harmless cross.

Despite his general threat from crosses in open play, Richards has not picked up a single assist so far this season, and his xA tally of 1.34 shows that he has not been a consistent chance creator either. He does not have any goals to his name as well, and while this is not essential for a full-back, it does indicate that his attacking game needs some improvement.

Overall, Richards is a competent full-back on the ball, who is dangerous in 1v1 situations and can be a threat through his crossing ability. He will need to improve his passing in terms of ball retention, while also perhaps needing to develop a little in an attacking sense by adding variety to his positioning and runs, to meet the high standards at Bayern.

Richards is an extremely aggressive full-back. He will look to get as tight to his direct opponent as possible, forcing him back towards his own half and trying to prevent him from turning. The Reading left-back will also attempt to get ahead of opponents to intercept passes wherever possible. 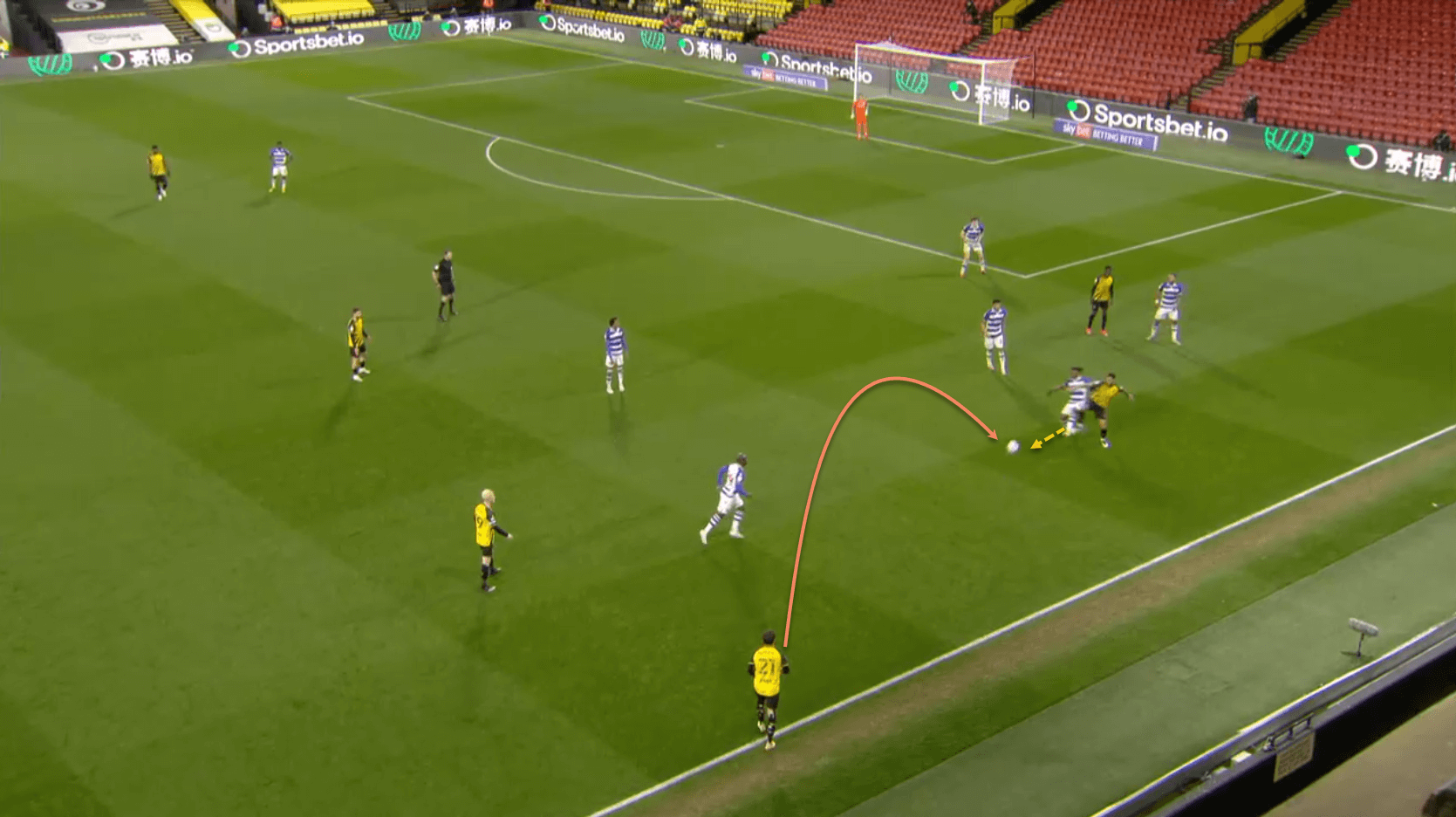 As Watford take the throw-in, Richards aggressively steps in front of the intended recipient to get a foot in and win the ball back here.

He is also decent positionally, able to cover for teammates when needed, and he will also track opponents into central areas if needed to ensure that his team are not caught out at the back. 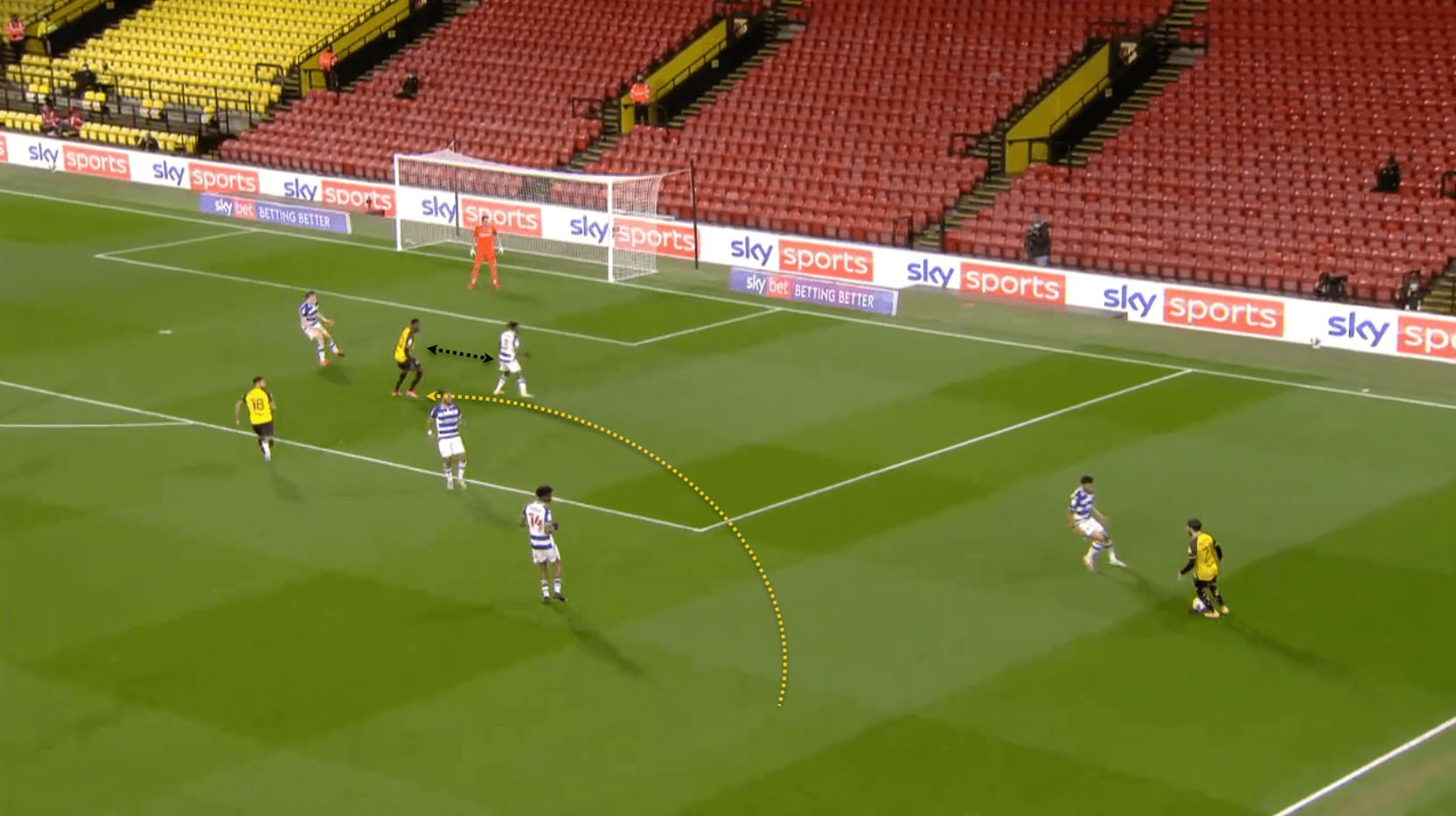 We can see here that Richards has gone into the box to become an auxiliary centre-back while tracking Ismaila Sarr as he made a run infield from the right.

Despite his height, Richards is not especially good at winning the ball in the air – he only averages a success rate of just over 37% for aerial duels this season, albeit from an average of 1.95 aerial duels per 90 minutes. This is an area where he needs to improve, as opponents could target him in the air, especially when he is defending the far post area on crosses from the opposite flank.

Richards is an extremely promising full-back, who has the physical and mental attributes to improve his game and become a quality left-back. He has been integral to Reading in the Championship this season, but Bayern Munich will be a different challenge altogether. The German side have used Lucas Hernandez at left-back in Davies’ injury-enforced absence, but the Frenchman is a centre-back by trade, and so cannot offer the dynamism and attacking thrust that Davies does. Richards can help fill that gap in the Bayern squad and deputise for the Canadian, but only time will tell whether he can improve his game to match Bayern and the Bundesliga’s high standards.