With Chelsea having overcome Manchester City in the earlier semi-final, Leicester City and Southampton faced off at Wembley to decide who would join the Blues in the final. Leicester were sitting in third spot in the Premier League, with the Foxes well and truly in a fight for the Champions League spots. Southampton, on the other hand, found themselves in the bottom half of the table in 14th, after a largely inconsistent season. With just one hurdle to cross to make the final, both sides sensed the opportunity to make the most out of their season and in this tactical analysis, we will look at the tactics of both Brendan Rodgers and Ralph Hasenhüttl and our analysis will show how the Foxes booked their place in the final. 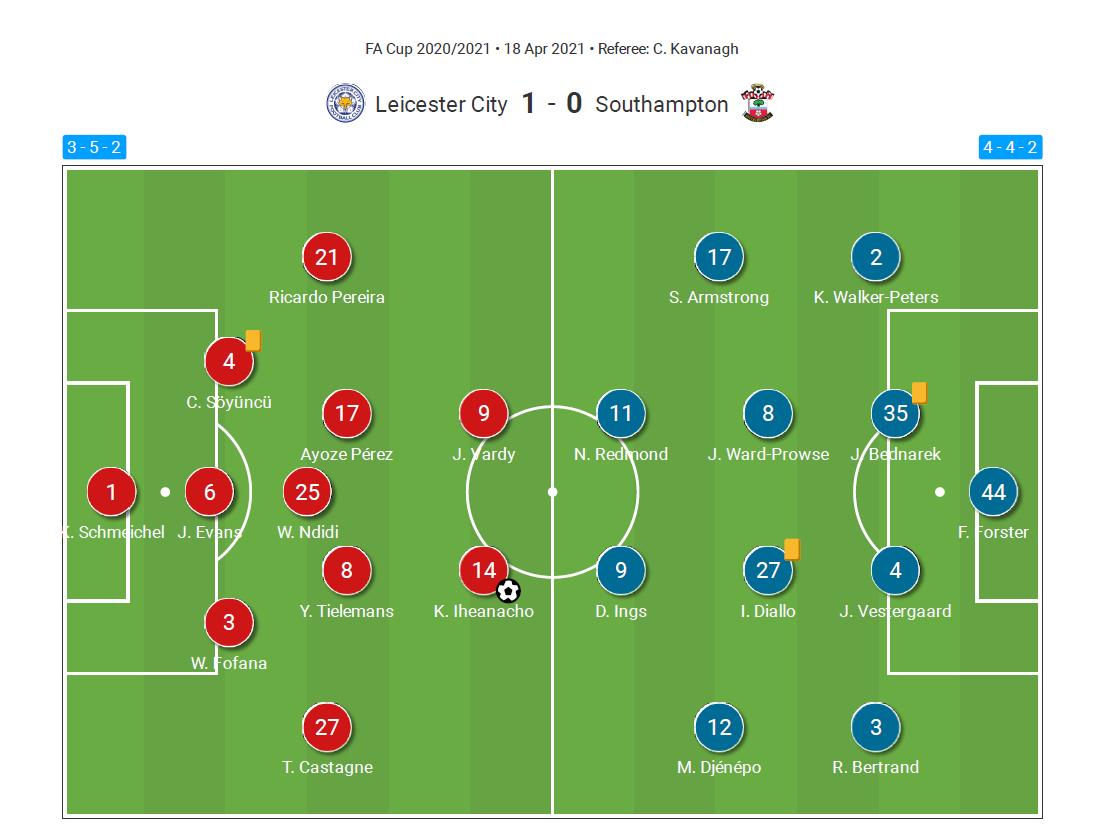 The 3-5-2 has been a formation that has worked well for Leicester recently, with Kelechi Iheanacho and Jamie Vardy leading the line. Youri Tielemans, Wilfried Ndidi and Ayoze Pérez were the midfielders with Ricardo Pereira and Timothy Castagne the wing-backs. In defence, it was the back three of Çağlar Söyüncü, Jonny Evans and Wesley Fofana with Kasper Schmeichel between the sticks.

As for Southampton, they lined up in a 4-4-2, with Nathon Redmond partnering Danny Ings upfront. Stuart Armstrong and Moussa Djenepo were the wingers with James Ward-Prowse and Ibrahima Diallo completing the midfield. The back four consisted of Ryan Bertrand and Kyle Walker-Peters as the full-backs with Jan Bednarek and Jannik Vestergaard the centre-backs. Behind them, Fraser Forster started in goal. 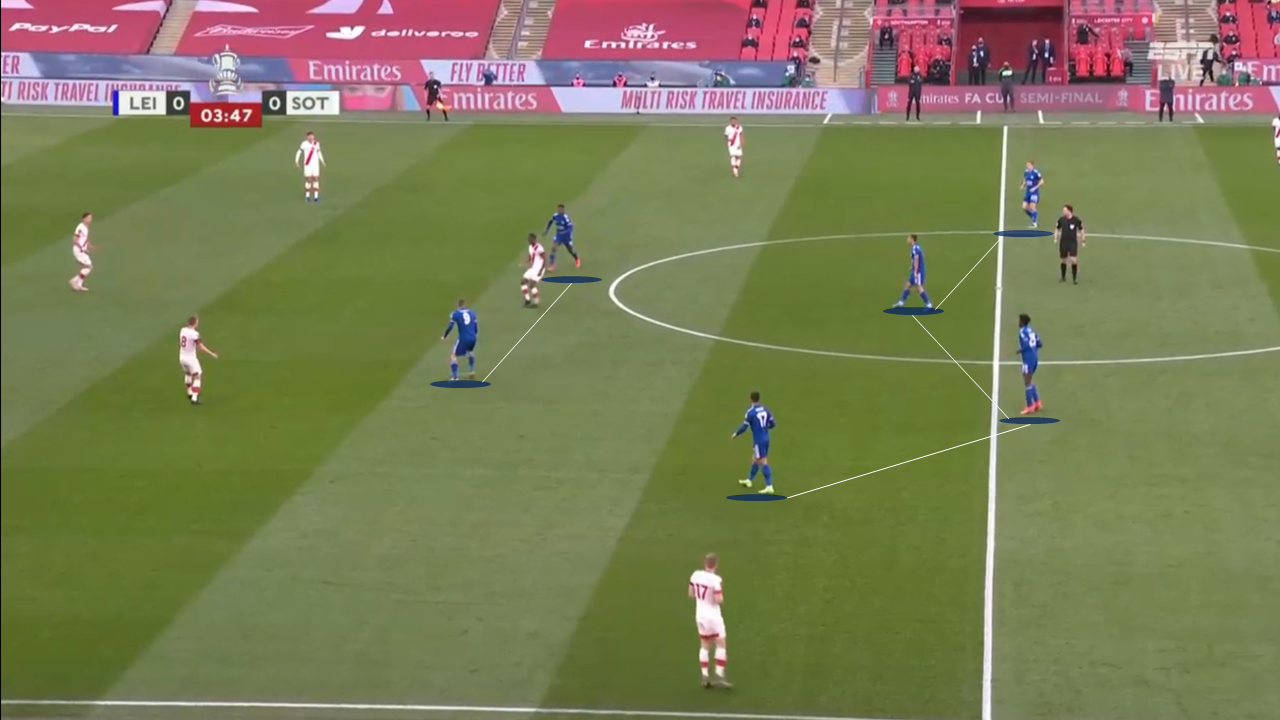 Off the ball, Leicester effectively shifted to a 4-4-2, with Castagne pushing up to join the midfield line. Ward-Prowse would also drop deeper to receive the ball from his defence and Leicester look to cut out the pass to Diallo, the other central midfielder. The 4-4-2 shape of Leicester was also very narrow, meaning the passing lanes through to the forwards was cut out and often Southampton were forced to play the ball back or to the sides. They were unable to penetrate the Foxes centrally and the pressing structure of Rodgers’ side had a clear aim to steer the opposition out wide. This was largely successful, with Southampton having no other real method of progressing other than through the wings. 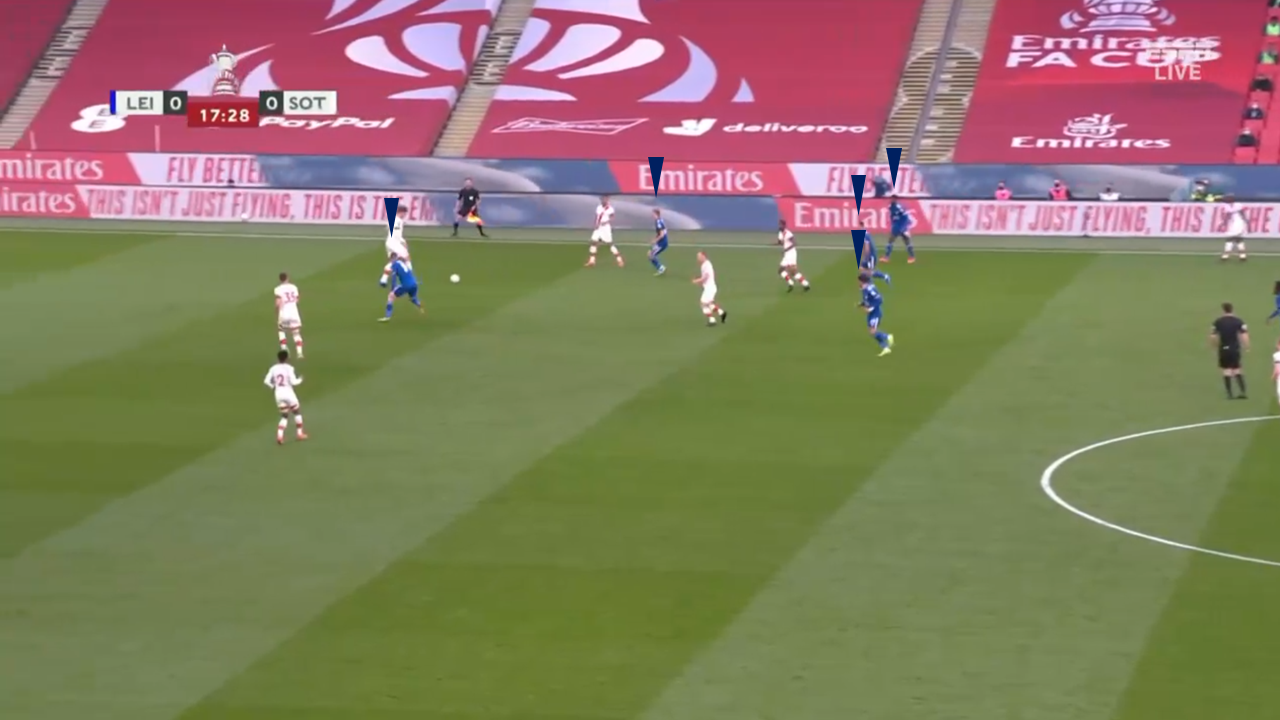 Once they moved to the wings, Leicester looked to overload the flanks and aimed to make the playing field as small as possible. As shown above, the Southampton centre-back and full-back are having to pass the ball between themselves, with Vardy cutting out the pass to the other centre-back. The two holding midfielders have dropped back to support but Leicester commit two of their central midfielders to press them as well. This creates a 5v4 situation in favour of Leicester down the wings and prevents Southampton from finding a way to play out of the flank. Leicester have successfully narrowed down the playing field as well and suffocating the opposition, forcing them to commit more players ball side and preventing them from stretching the Foxes. This often meant that Southampton had to resort to long balls in order to launch an attack and play through the lines. 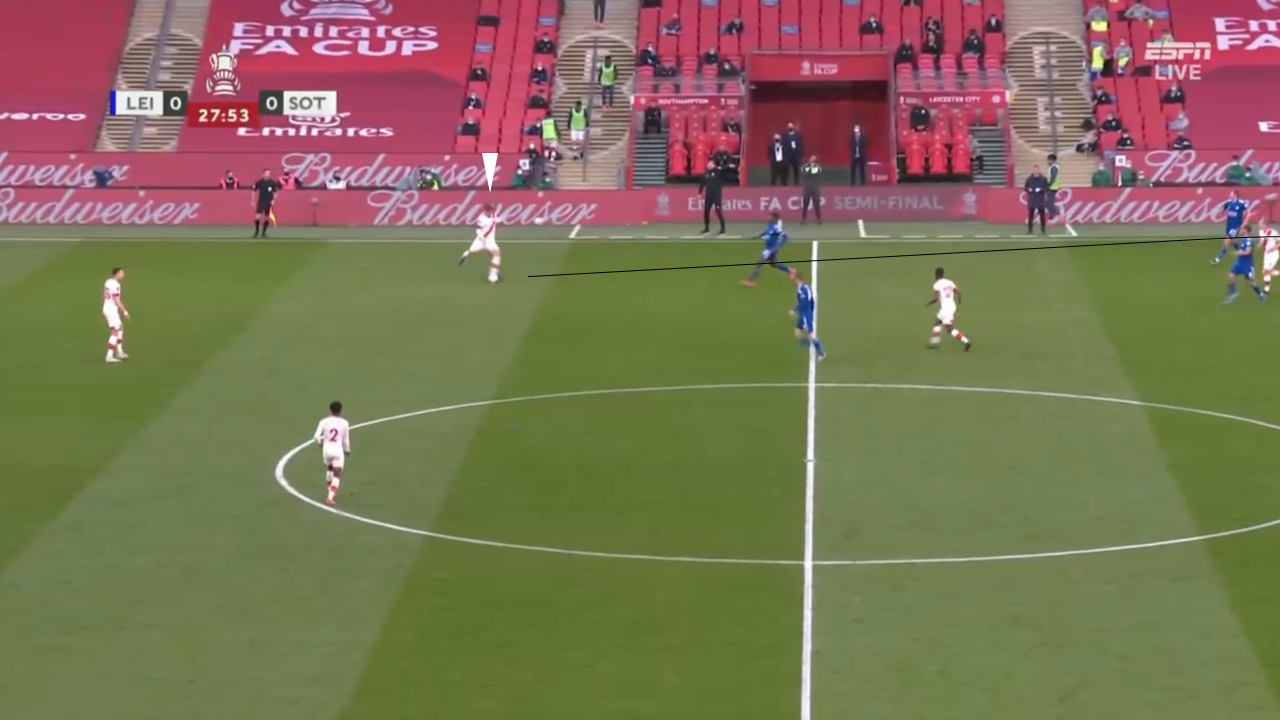 As mentioned earlier, Southampton’s best chance of progressing the ball was by means of long passes to bypass the Leicester press. Having been forced toward the flanks, the Southampton backline often found themselves looking for through balls to their forwards in the hope of finding them in pockets of space between the lines. An example of this is shown above, with Vestergaard attempting to play the ball into his forward with the Leicester forwards pressing him and cutting out any forward short passing option. 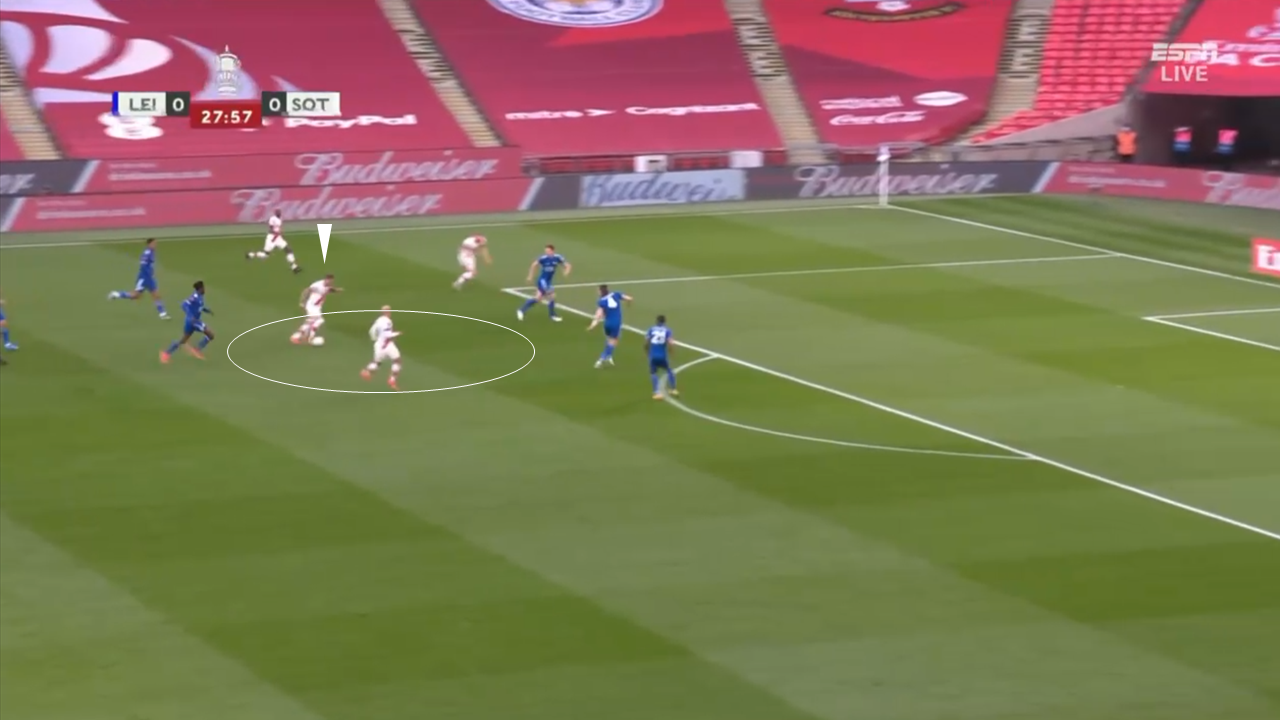 This was obviously not the best way for a side to progress but the Saints did find success at times, finding their attackers in the half-spaces and in good positions to take on the Leicester backline. We see above how the pass from Vestergaard finds Ings in space and Southampton find themselves in an excellent position on the edge of the penalty area. However, we see that there is no real passing option for Ings, with his teammates too close to him owing to Leicester’s tactic of narrowing the playing field. The Saints aren’t able to exploit the space and in fact, they did not manage a single shot on target the whole game, having taken just six shots in total. 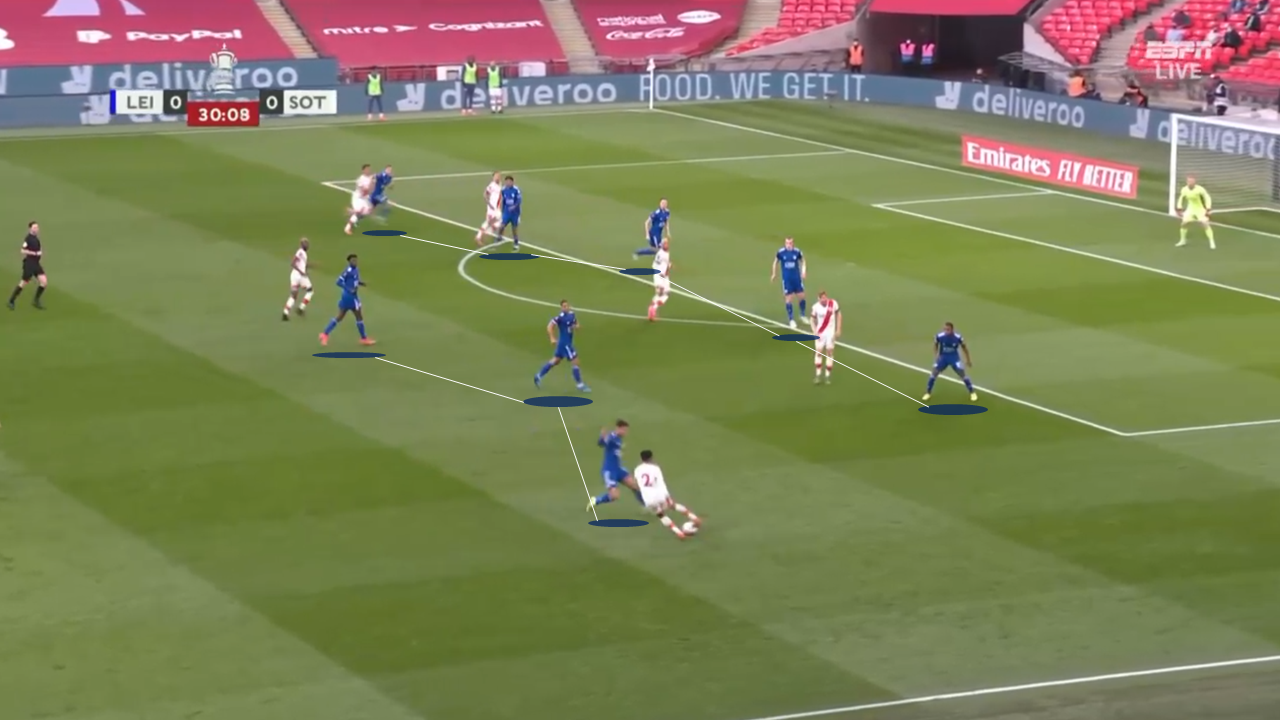 Once Leicester settled into their 5-3-2 shape in defence, it became even harder for Southampton to find a way through with the Foxes not affording them any space. We have seen the Saints use the crossing ability of Walker-Peters to put in early crosses from deep but Leicester’s defensive shape meant that either these crosses were closed down or were easily dealt with within the box. Whenever a Southampton player looked to receive between the lines, there would be at least three Leicester defenders in close proximity to step in and engage, meaning the Saints could not find an effective way through the defence. This lack of concrete tactics to bypass the Leicester defence meant that despite their 51% possession, Southampton could not create proper goal-scoring chances for themselves regularly. 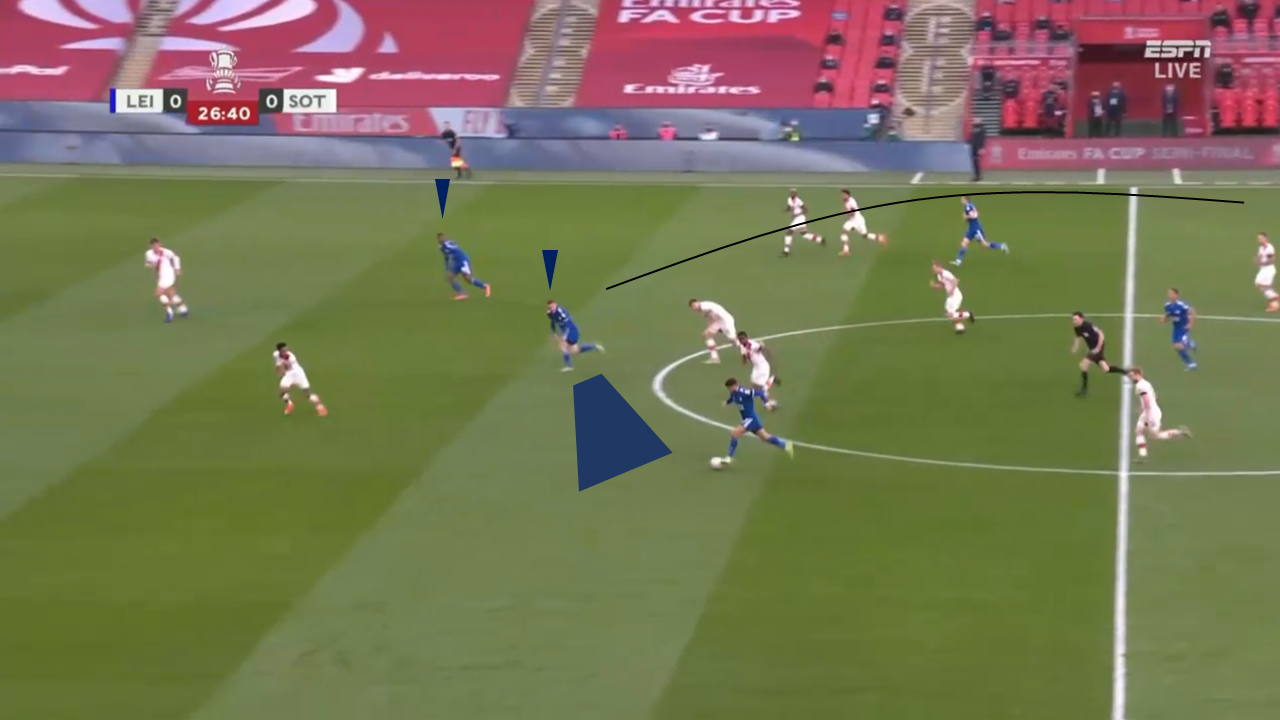 Rapid transitions have become a trademark of Leicester and this game was no different. Playing with two forwards up front allowed Rodgers’ side to use one of them as a focal point in attack, dropping back to receive and play to his teammate before racing ahead on the turn. It was often Vardy who took on this role, with the Leicester backline using him as a quick outlet to progress the ball higher up the pitch. Vardy would receive and have runners beside him ready for the second ball as well, in case of aerial balls to the forward, and were also passing options in space for Vardy to find. Iheanacho’s presence also meant that the Southampton centre-backs could not take their chances in coming forward to pressure Vardy for fear of leaving in large spaces behind for the Nigerian to attack. This often meant that Leicester found themselves in dangerous positions ahead of the opposition’s defence and could go at them with pace. 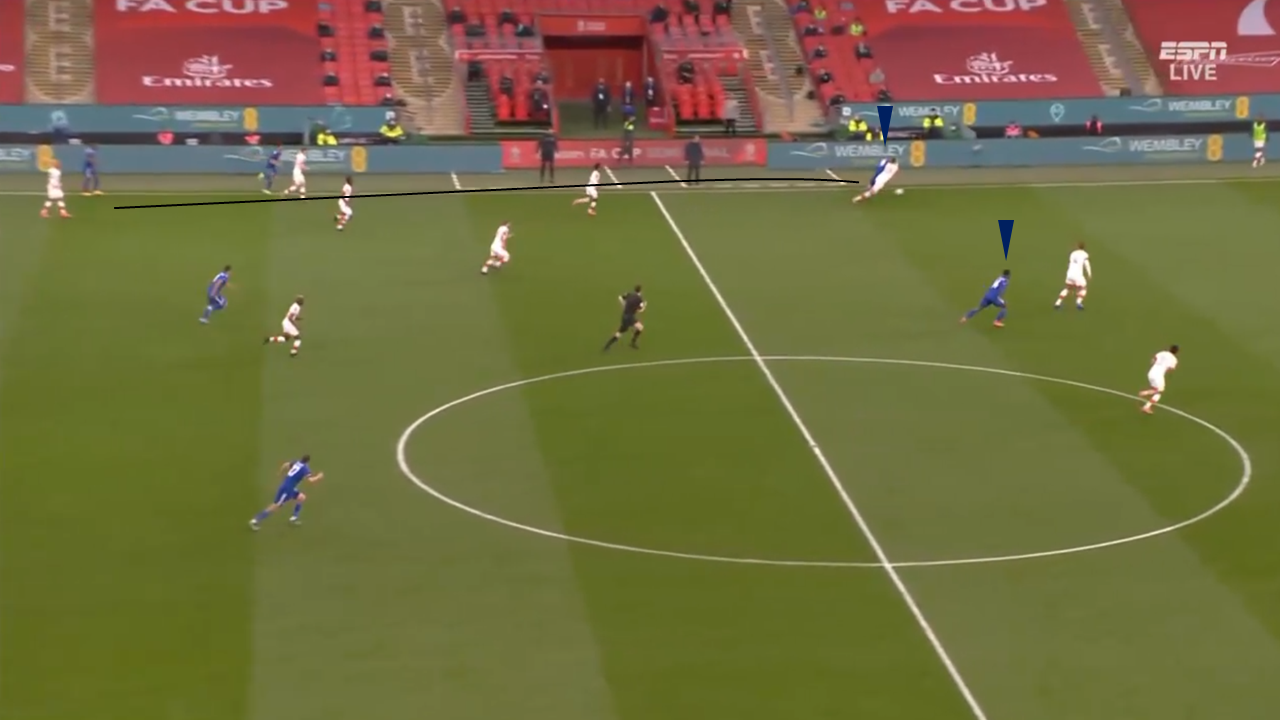 This was in fact how Leicester scored their goal as well, with Vardy dropping to the flank to receive a ball from the defence. An intelligent turn saw him create space for himself and breeze past his defender and Iheanacho’s presence means that the centre-backs cannot go across to meet him as well. With this one simple pass, Leicester are in behind the Southampton defence and such a rapid transition was difficult for the Saints to put up with. Some smart movement in the box from Iheanacho meant that he could receive the pass from Vardy in space and after his first shot deflected right back to him fortunately, he made no mistake in slotting past the keeper the second time. The Saints had not looked comfortable against these transitions throughout the game and were unable to organise themselves at the back when hit with such pace. Interestingly though, they only allowed the Foxes a single shot on target out of 10, but in the end, it was all that Leicester needed.

Having beaten Manchester United in the quarter-finals and now making it past Southampton, Leicester’s charge to the trophy has just one hurdle left to cross. They face a rejuvenated Chelsea under Thomas Tuchel, with the Blues in the semi-finals of the Champions League as well and the final promises to be an exciting affair.

As for Southampton though, their best hope of salvaging something from this inconsistent season has passed, with the side destined for a bottom half finish in the league. They currently lie 10 points behind Leeds United in 10th place but at the same time are nine clear of Fulham in 18th having played two games lesser. It’s all about finishing the season as best as possible before the work begins as they would hope to have a better campaign next year.