A couple of months ago, in this scout report, I analysed Rodrigo Zalazar of St Pauli, an exciting, young, dynamic central-midfielder on loan from Bundesliga side Eintracht Frankfurt. Now, I am taking a look at his teammate, also on loan from a Bundesliga club, this time a player vying from north Germany, rather than the south.

Omar Marmoush has had some journey from Egypt to Germany, but now, in the second tier of German football, he is proving to people why Wolfsburg purchased him in the first place, and the talent they saw within him from his time in the African country. This analysis will look at the player he might come to be.

In this tactical analysis, we will cover his role at St Pauli, his pros and cons as a player, and the level he could reach in the future.

Born in a small town within Kario, Egypt, Marmoush was only ever a stones throw away from an Egyptian club named Wadi Degla SC, who he would join from a very young age. At the time, they were yet to be in the highest tier of Egyptian football. Going through his childhood and teenage years with them, it was in 2017, when Marmoush was 18-years-old, would he impress enough to be poached by Wolfsburg in the Bundesliga. In Egypt, to garner the attention of a European club at that age was, and still is, incredibly indicative of his superb talent.

For a fee of just under £100k, Marmoush joined Wolfsburg at a time where they were building a great young team, with chances galore for youth players to train with the first team and prove their worth. Maximillian Arnold, Yannick Gerhardt, Victor Osimhen now at Napoli, to name a few. All these players have been given chances, and in the case of Osimhen, extenuating circumstances meant he did not thrive at the German club but has experienced success since. Marmoush has not had an easy ride at Wolfsburg so far, but with time, he could prove his worth yet.

Standing at 5’10” / 177cm, Marmoush is a dynamic, albeit raw centre-forward, who spent time as a youth operating as a winger, and when you watch him play today, that is clear to see. He is direct with the ball at his feet, constantly engaging in 1v1s, cleverly manipulating his body from one side to the other to glide past his opponents, alongside a cheeky flair skill move in the process. In front of goal, he relies pretty heavily on that stronger right foot to score goals, which we will dive into later. 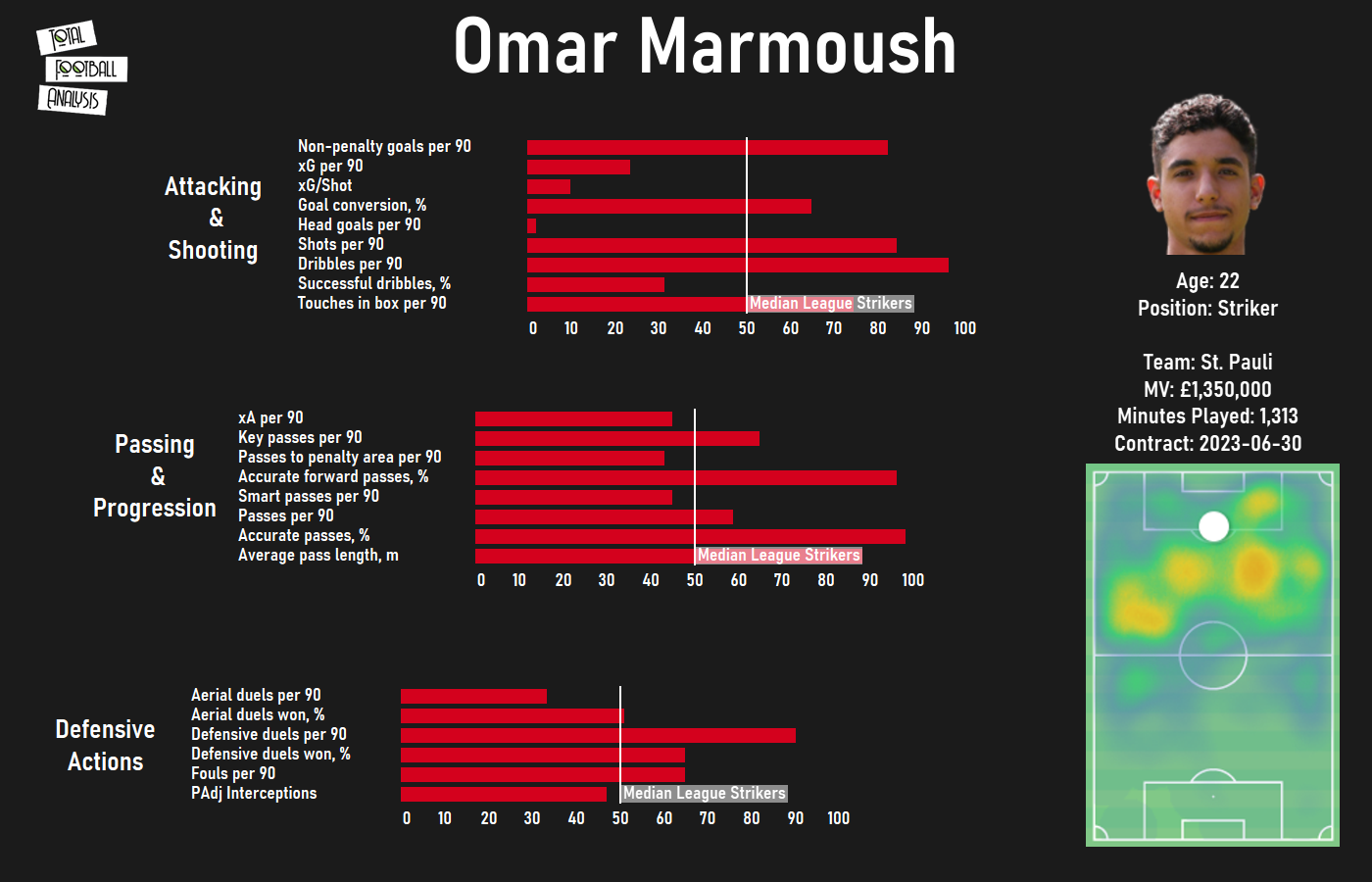 In a 4-1-2-1-2/4-3-1-2, Marmoush has been paired with former Schalke striker Guido Burgstaller up front, and it has been rather successful. Burgstaller – who was injured for much of the first half of the season – has proved to be a brilliant fold that Marmoush could play off of and combine with. Through Burgstaller’s industry and physical presence, and Marmoush’s irritating directness with the ball at his feet, defenders have a difficult time contending with the pair of them. 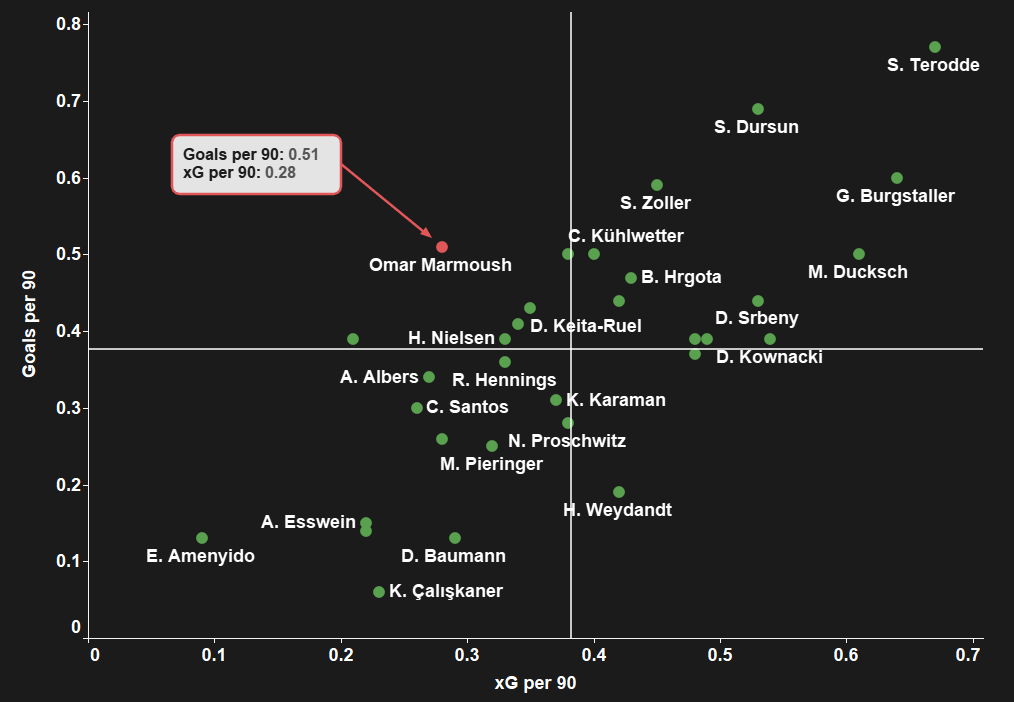 Scatter plot of 2. Bundesliga strikers’ xG per 90 compared with goals per 90.

Despite his success since joining St Pauli so far, his goalscoring rate has actually been above expected values. From viewing his footage extensively, I can conclude this is for a few reasons, but mainly because he is on a hot scoring streak, scoring from unlikely angles. He spends a good portion of his time on the pitch in wide zones, given the lack of natural wingers in Timo Schultz’s system, and as a result, many of his shots come from locations where he has carried the ball into the penalty area from a wide area.

However, more on his ball-carrying later, for now, let’s take a look at his movement. The Egyptian possesses decent pace that he utilises wisely in the final third for the most part (similar to his national counterpart at Liverpool, Mo Salah), but this is certainly a part of his game that could be improved. He typically releases the ball at the latest moment possible, so a lot of his movement is limited to getting on the end of a one-two that he has orchestrated. 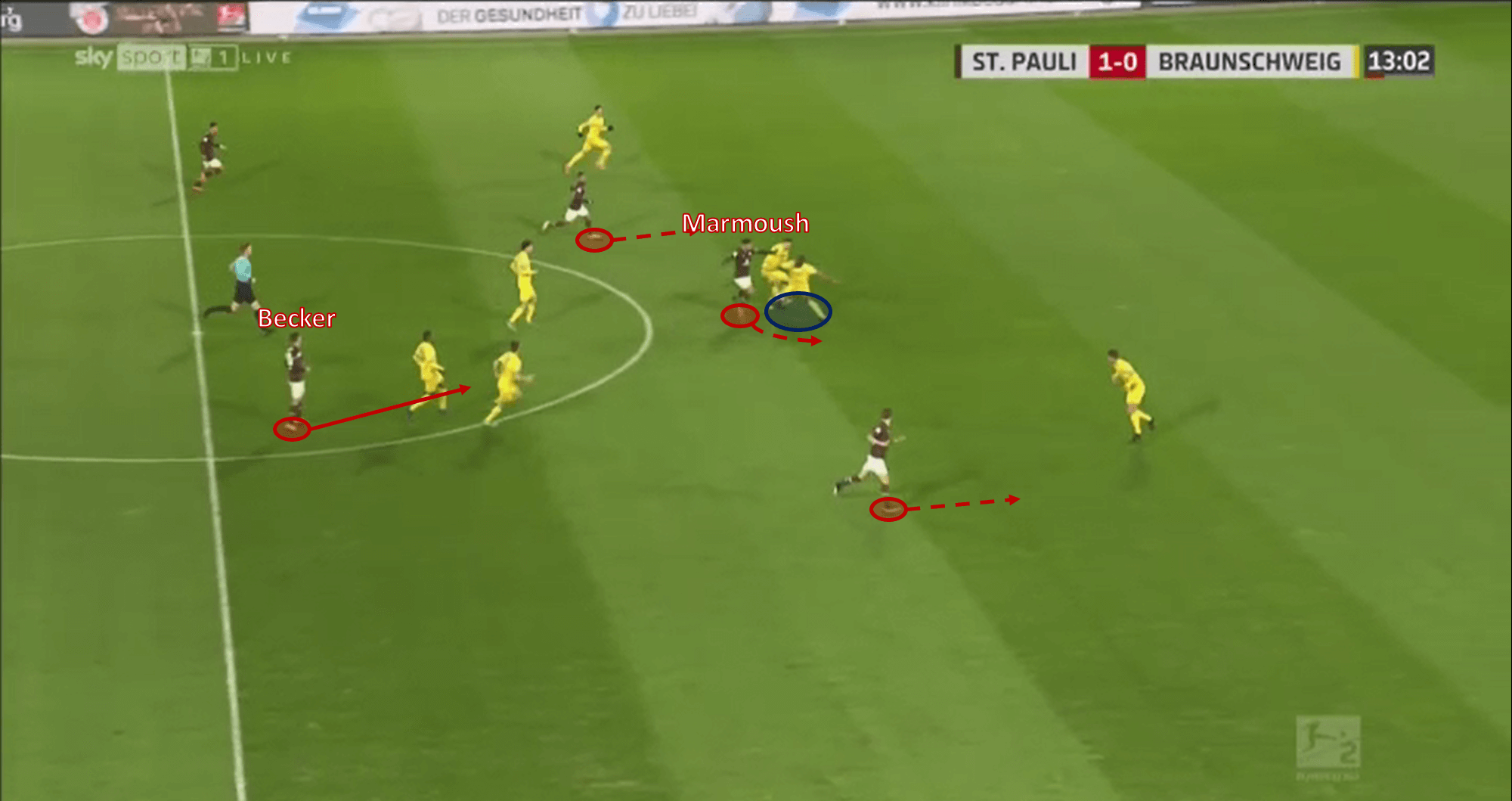 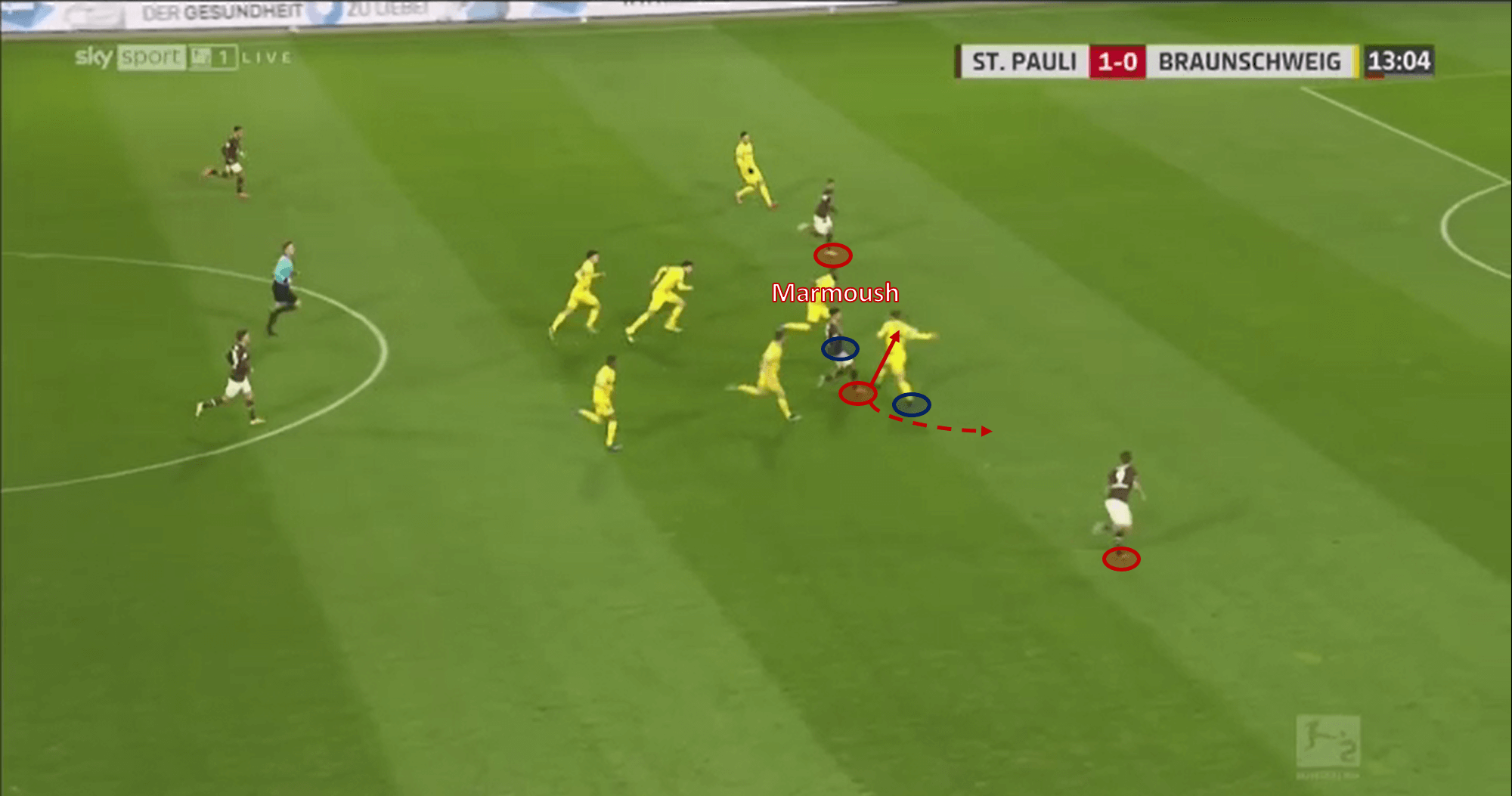 Further afield, Marmoush keeps the ball in a tight area, and offloads to a supporting player, before running into space of his own to receive the ball again.

In terms of finishing, it might be a hot streak but has demonstrated some fantastic technical fundamentals. He prefers to shoot from the right, where he can strike the ball across his body into the left-hand side. This is usually at the climax of a dribble into the box, but he does well to slow down his running pace, arch his body over the ball, and strike the ball cleanly with the inside of his boot. 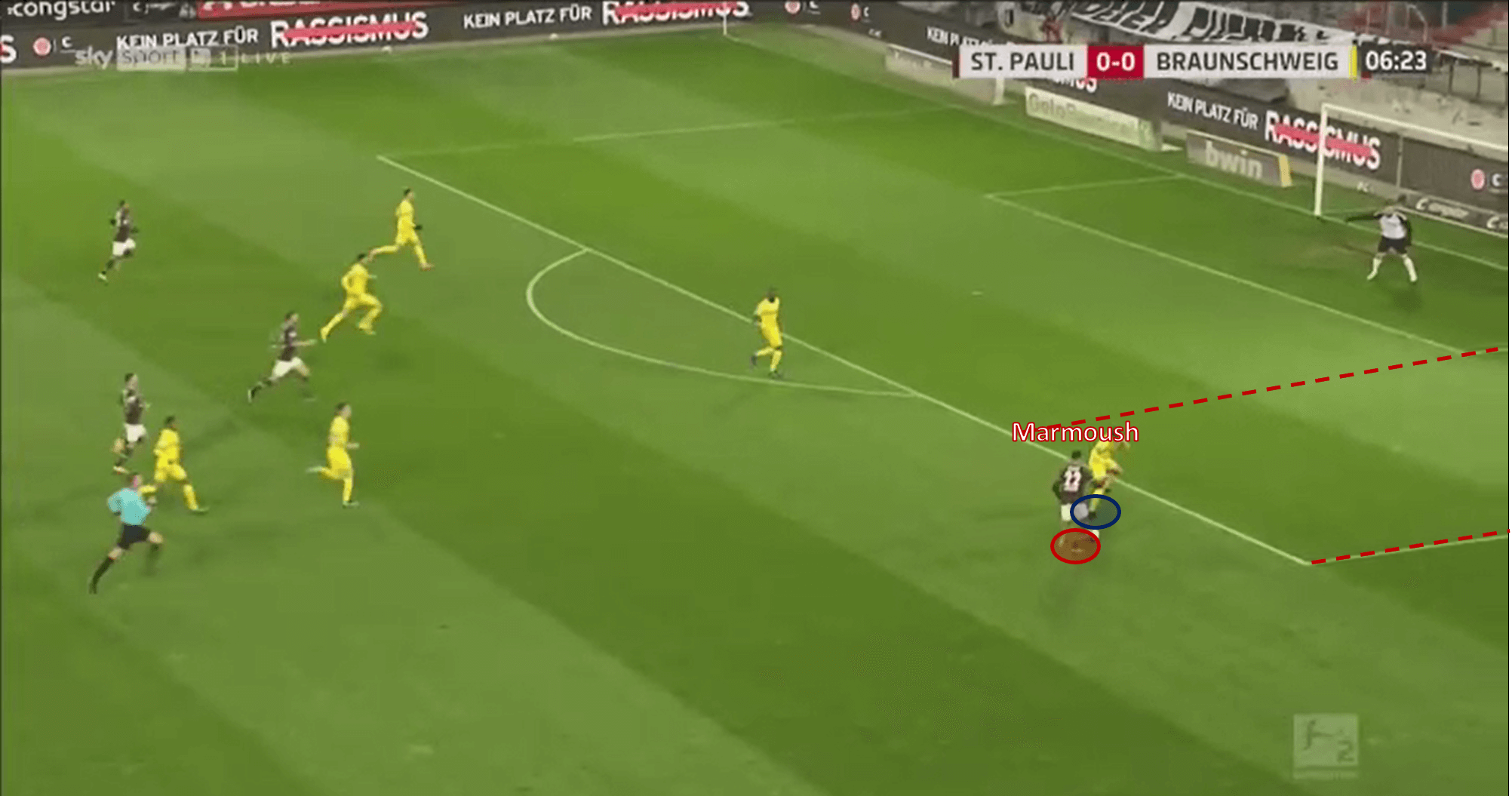 Marmoush here leaves his opponent backpedalling, which makes him able to enter the penalty area. 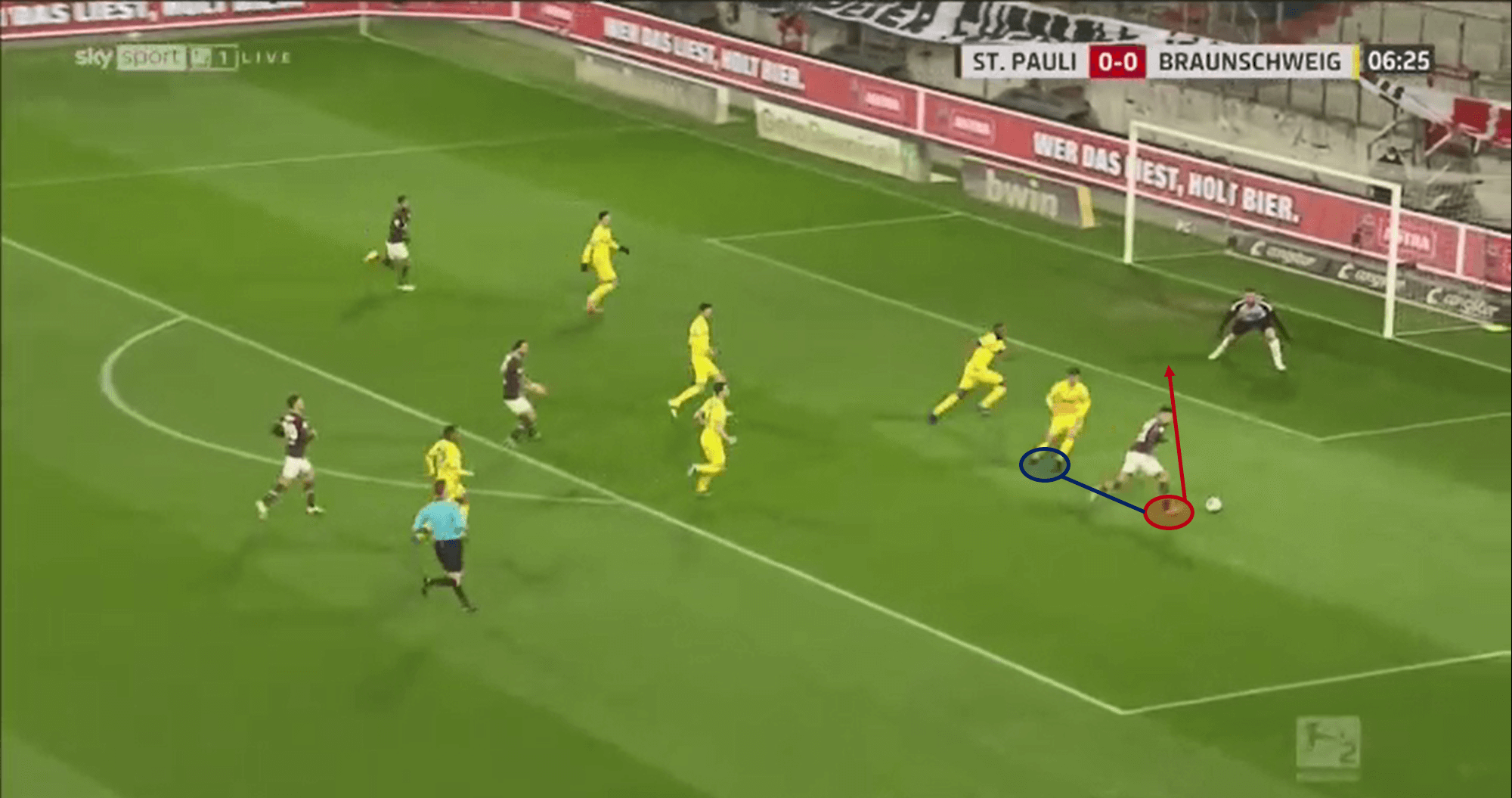 He completes the stepover, shifting from left to right, creates half a yard of space, and expertly finishes into the bottom left with utter composure.

The 22-year-old definitely is not limited to right-footed finishes, despite all of his seven goals thus far coming from his stronger foot. His dribbling ability has guaranteed his passage into the penalty area from the left side, where he has shown he can shoot with his left foot ably too. Having said that, you hope that Marmoush can show more conviction or variation in the future to add to his unpredictability which makes him such a threat. 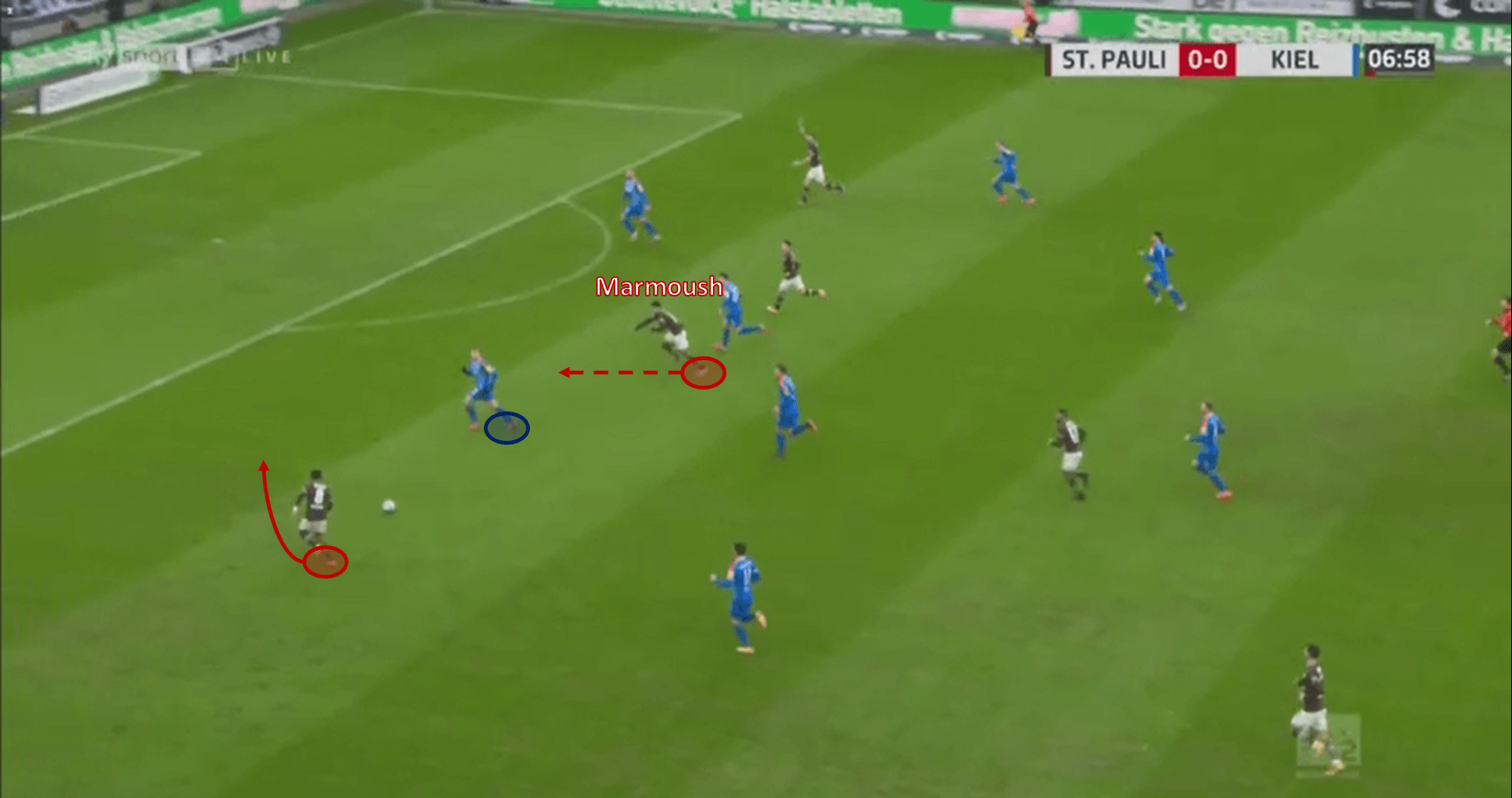 Marmoush here calls for the through pass which Zalazar kindly obliges. 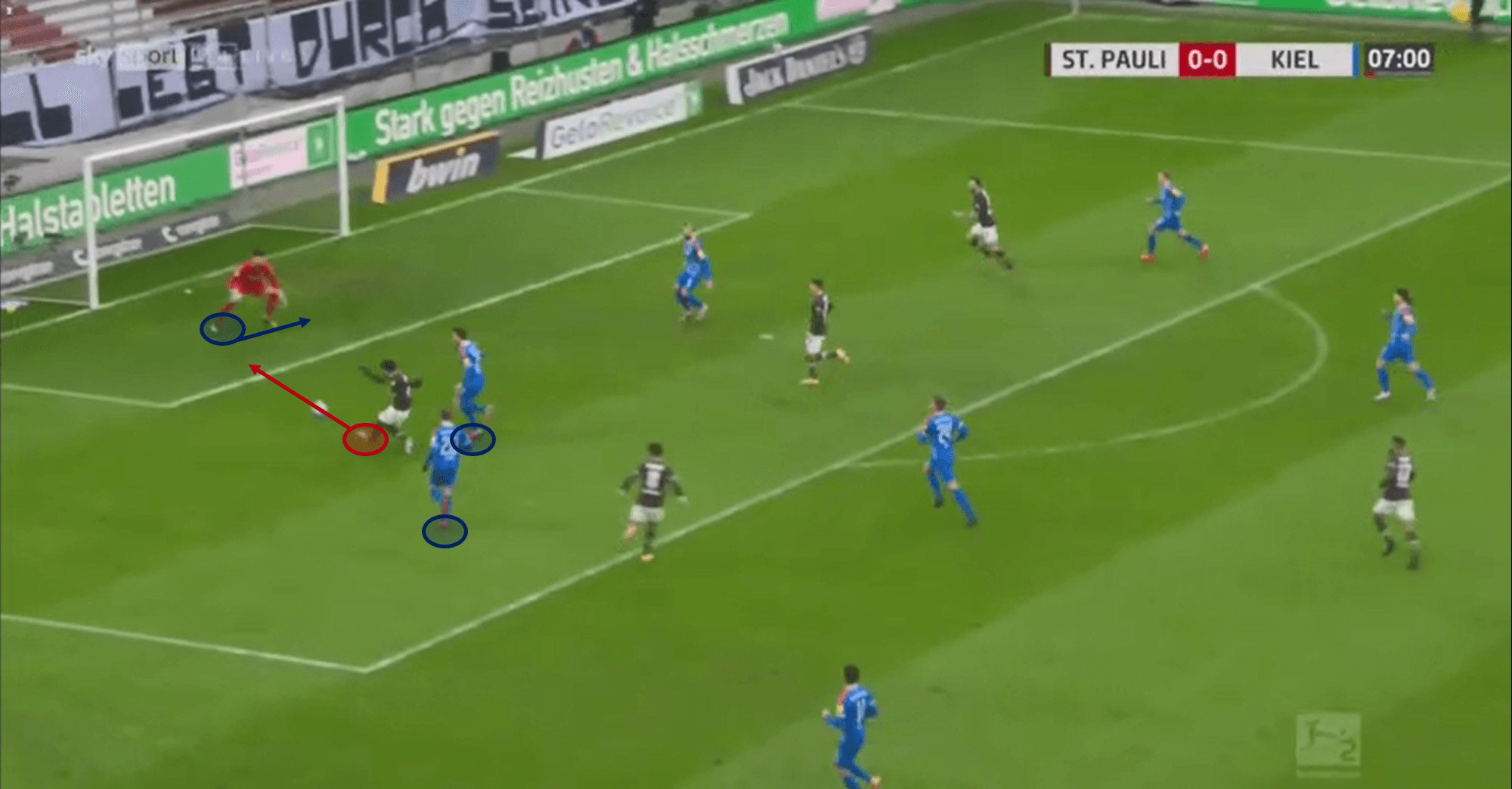 Inside the penalty area, the keeper shifts to his left, and Marmoush does strike to his right, but the keeper puts a leg to it, to get in the way.

If one were to take a look at Marmoush’s heatmap, they would see a concerningly small period of time spent inside the penalty area, and a lot more much deeper and wider than you might expect from a #9. The 22-year-old enjoys receiving the ball to feet so he can drive at the opposition defence and disrupt their structure. He could do with staying higher up the pitch on occasion, but overall, his dribbling ability is a big benefit to his team. 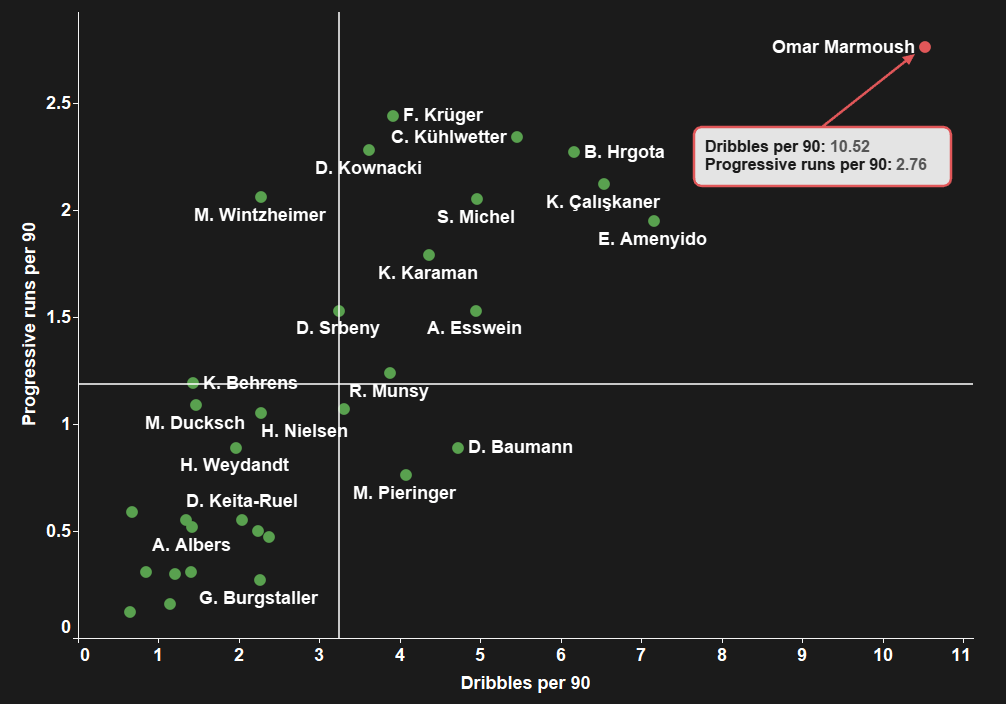 Scatter plot of 2. Bundesliga striker’s dribbles per 90 with progressive runs per 90.

As we can see from the visual data above, Marmoush excels at ball-carrying. He attempts an extraordinarily high number of dribbles for a centre-forward, and he completes them at a decent rate (41.38%) consider where some of these dribbles are attempted and the sheer volume of them. These, by virtue, translate into progressive runs too, indicative of his attacking intent in the final third to destabilise the opposition.

Mentioned further up the piece was the fact that much of Marmoush’s time on a pitch is spent in wide areas, rather than inside the penalty area. He tends to drop deeper, collect the ball to feet, turn, and off he goes. At 5’10”, Marmoush has a nice balance between good upper-body strength, whilst remaining agile enough to complete neat little touches to bring the ball past his opponent. 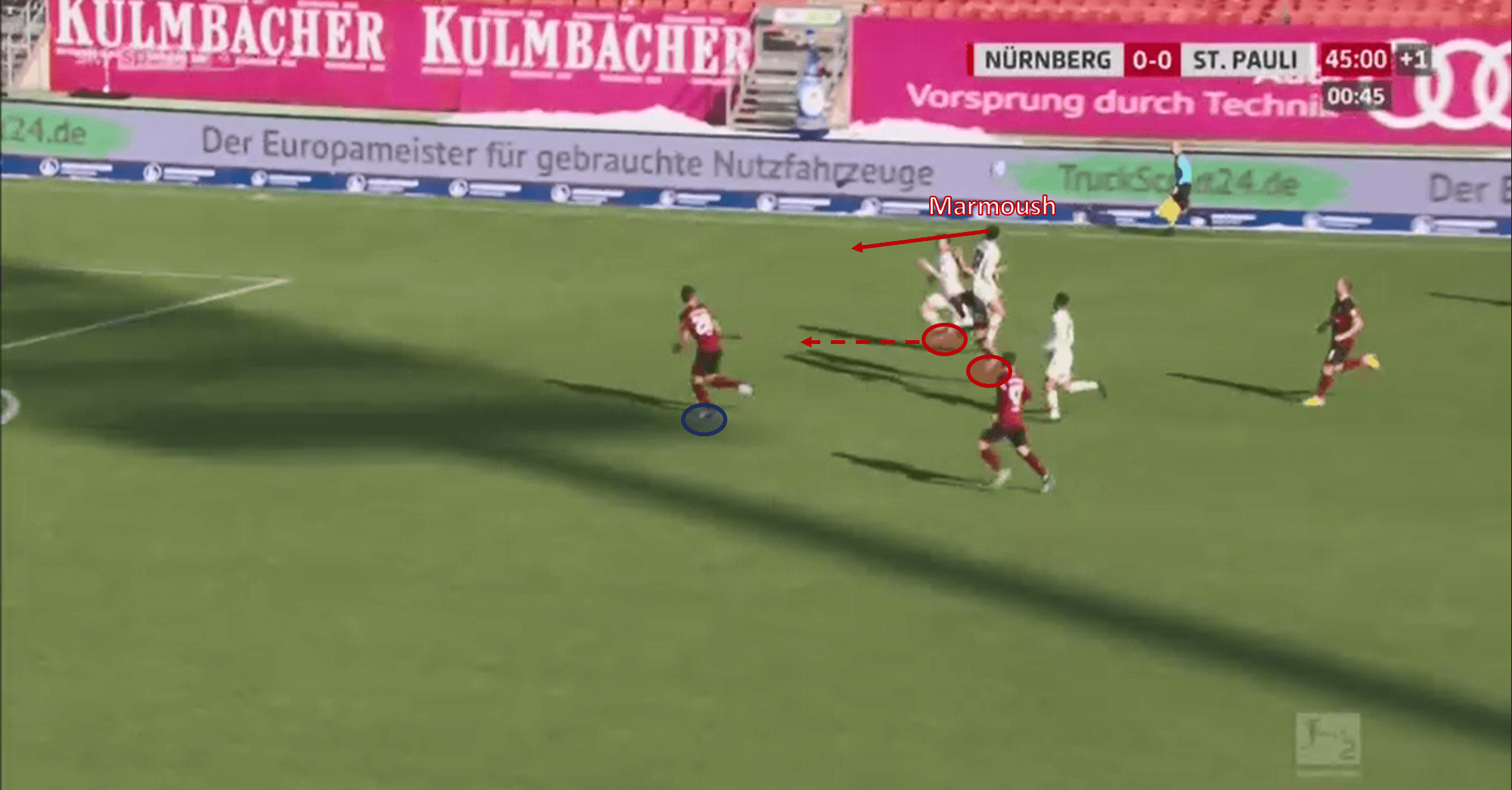 Thanks to a great leap, Marmoush outreaches the defender to head on the ball towards a teammate. 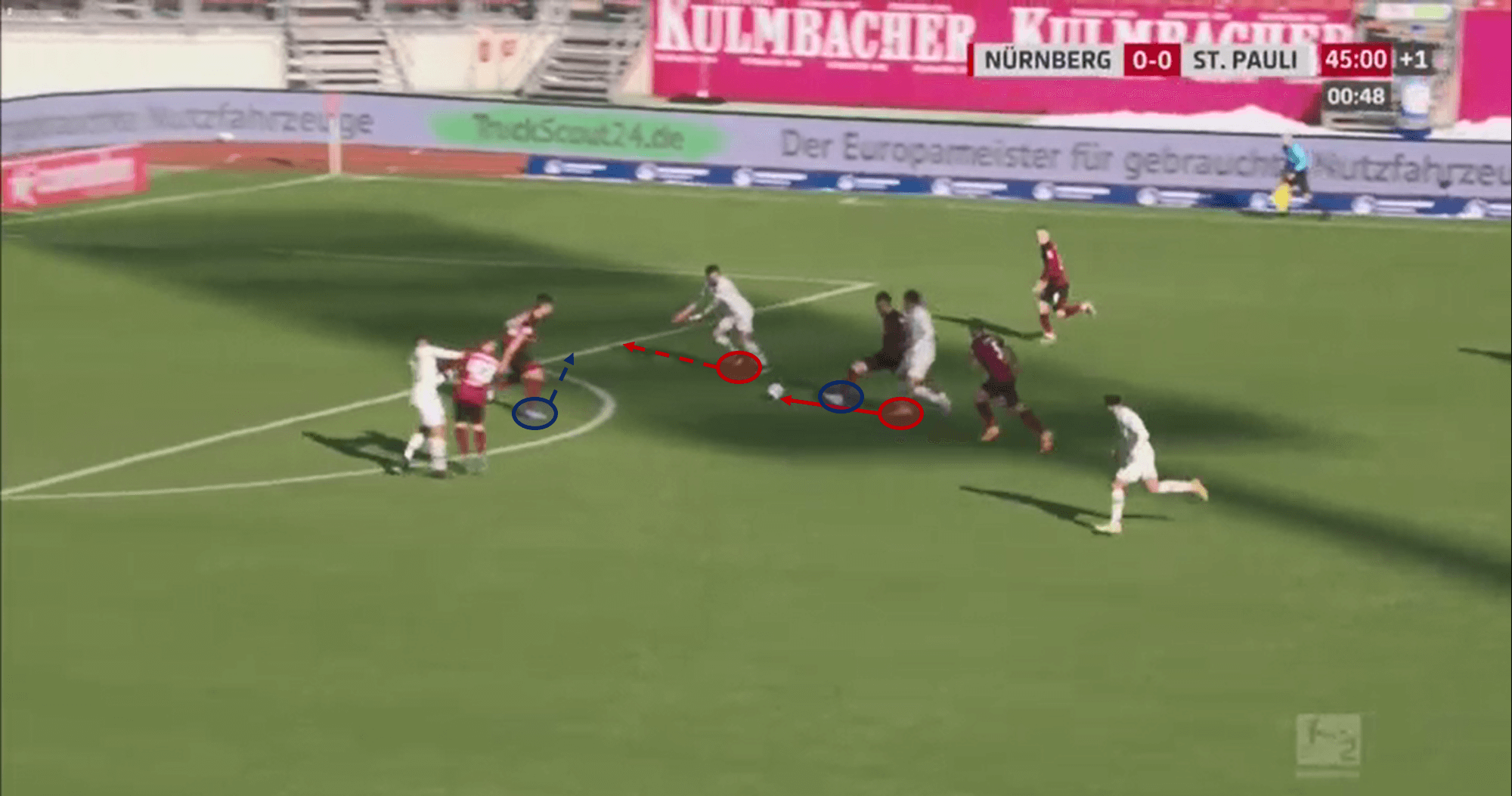 Despite heavy pressure from his opposing man, Marmoush calmy slots Burgstaller in behind the defence with a neat through pass.

The Egyptian is all for flair skills moves to get past his opponents as well. It is not uncommon to see him approach a defender with the ball at his feet, leave a couple feet’s distance between the two, and produce something like a stepover, a flip-flap, a ‘Ronaldo’ chop, or otherwise. Shifting from left to right is his usual port to call and it works well the majority of the time. 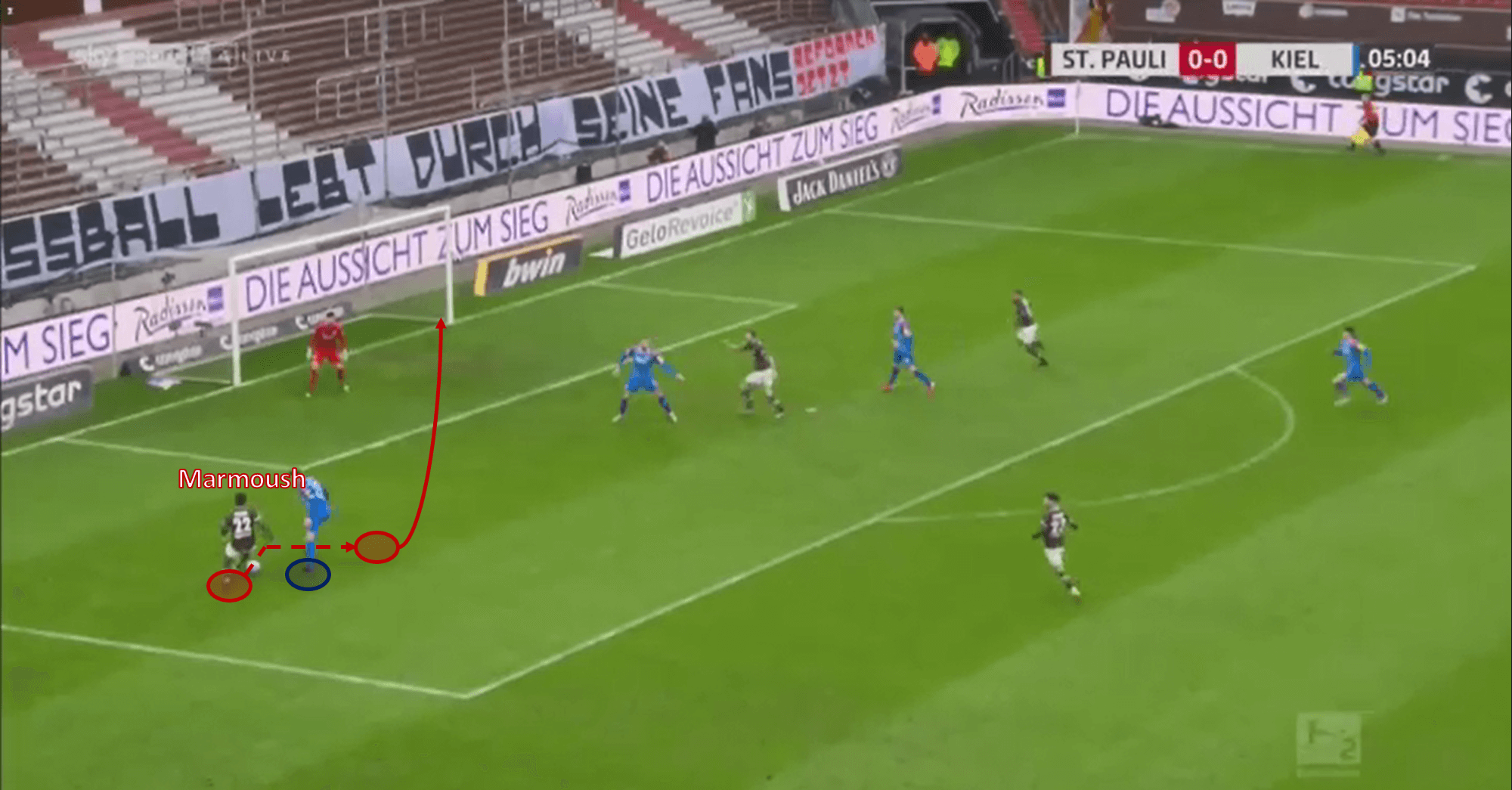 Here, Marmoush comes in from the left-wing, angling his frame from left, and then swiftly tilting right to leave his man flat-footed, and now he can enter space to take a shot.

As many young players do, he can have trouble with overstepping his ball carries, running too fast to keep the ball at his feet and losing his balance as such. This is how Marmoush loses the ball most noticeably and most often. Fortunately, or perhaps, unfortunately, this predominantly happens outside of the penalty area and in wide areas, but it does occur deeper down the pitch, where losing the ball is potentially more dangerous for his team.

Now, St Pauli have not maintained a good defensive record this season, however, Marmoush has been fairly active in his defensive duties. He is the type of player to press the man rather than the ball, looking to shrug the ball carriers out of possession, but this does concede needless fouls on many occasions, especially when attempting to recover possession from behind. 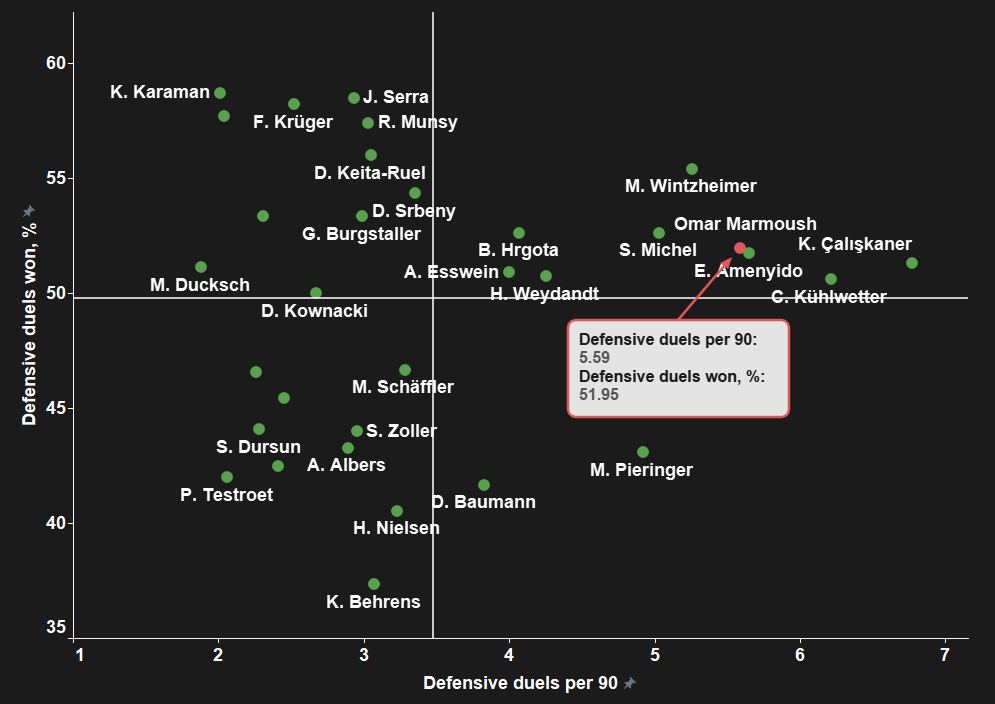 Having said that, he is in the best quadrant here for defensive duels and his success rate, attempting a high number of defensive actions and completing them at a marginally high rate as well. He is a young player with bundles of energy, applying himself well in Schultz’s system, and this will translate well to pressing systems in Europe’s top five leagues, should he choose to play for Wolfsburg or move away from them. 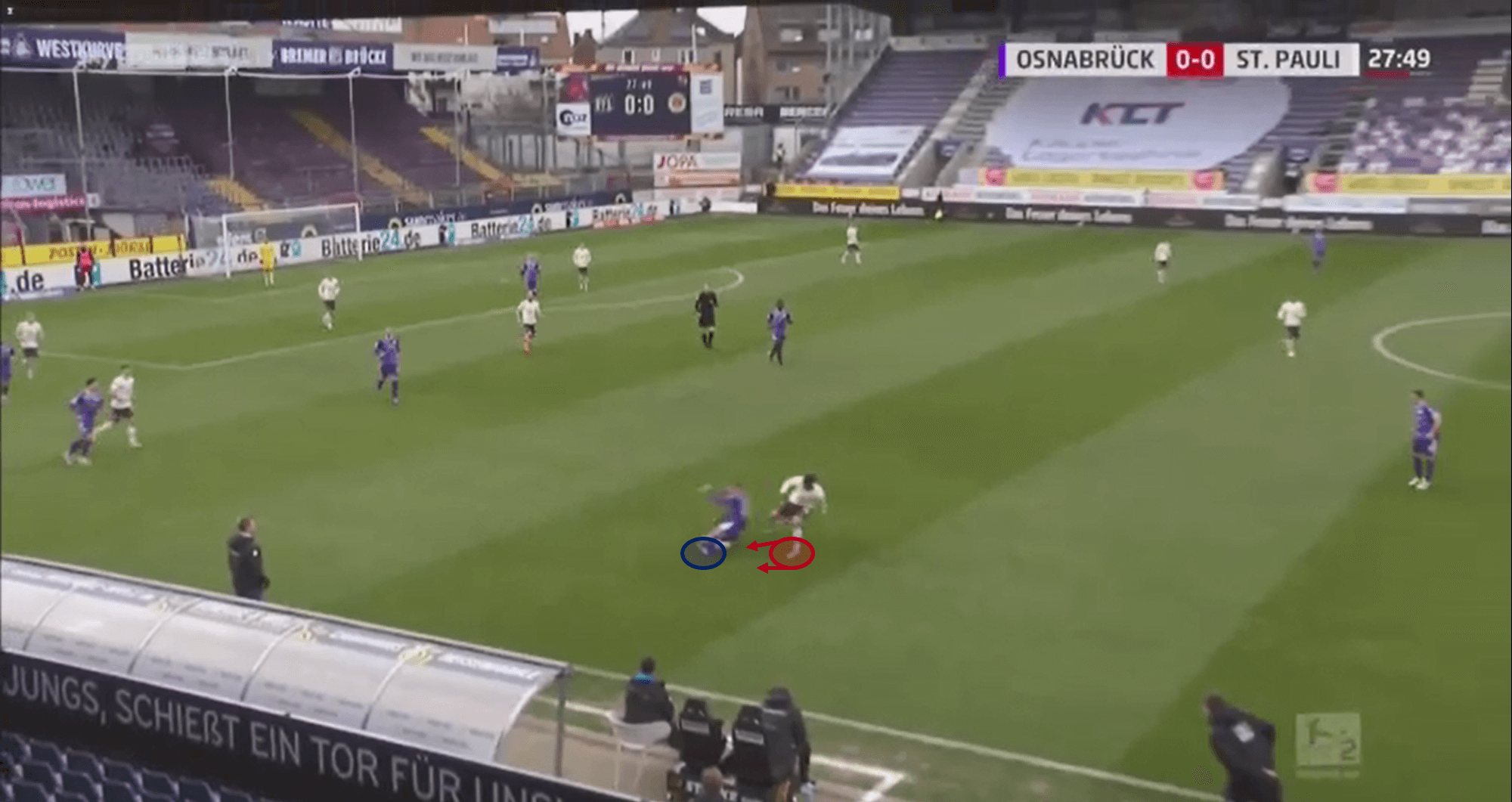 Here, we see an example of Marmoush chasing the player, rather than the ball, and as a result, conceding a foul.

He does not deploy pressing in the sense of a typical striker, chasing after the ball when it is being rotated around the defenders in build-up play, rather he looks to recover the ball as fast as his team lost it, causing counterattacks for St Pauli meanwhile. This is rather useful and Marmoush does well to manipulate his body between the player and the ball to disconnect the two and carry the ball for himself, often bursting forward up the pitch to spark attacks on the counter. 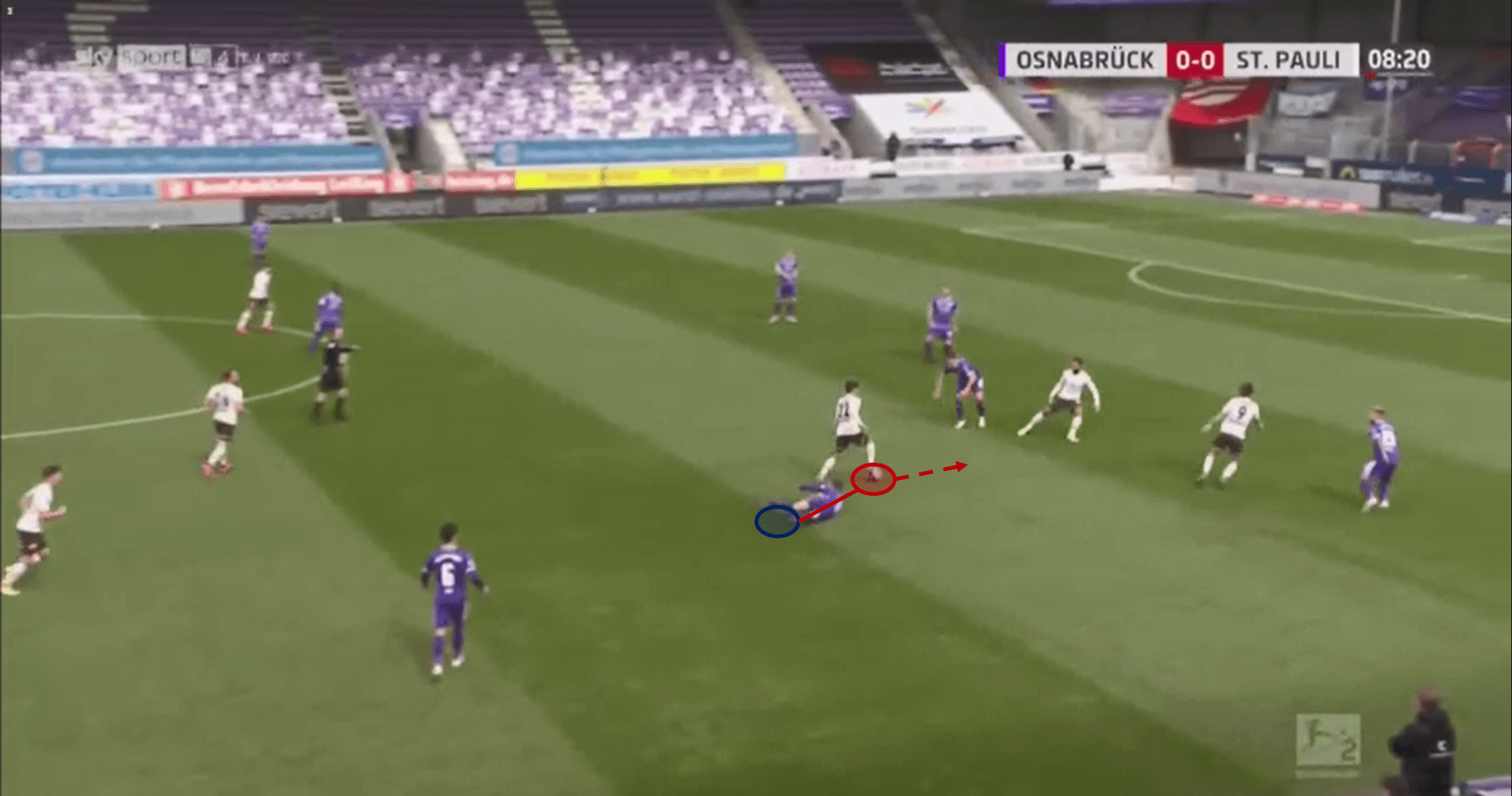 Marmoush here recovers the ball harshly but is in a scenario where he sparks a genuine chance on goal.

So, overall, his defensive application has pros and cons. He clearly listens well and takes in the instructions of his manager when it comes to off the ball work, which is becoming ever-important in the modern game, and how he defends in-game scenarios is typically clean and effective. However, when it isn’t clean, he can fumble into his opponent, causing needless fouls, occasionally from dangerous areas (to set up a free-kick, for example).

For the immediate future, Marmoush most likely won’t be ready for a starting position at Wolfsburg come the launch of the 2021/22 season, so a loan to a Bundesliga club should be on the cards. He is ready to make that step up to a mid to low tier Bundesliga team. Should he join a side that thrives on the counter, such as Stuttgart or maybe even Everton further abroad, Marmoush would be a very smart acquisition on a loan deal, with a view to make it permanent. Moving to Stuttgart, under the guidance of Sven Mislintat, young players are given the chance to succeed, so that would be a perfect destination for the 22-year-old.

In the long-term, Marmoush needs to improve his movement to garner himself chances inside the penalty area more often, equalling in more goals throughout a full season. He has proven to be a dynamic #9, capable of producing magic moments that most other players cannot, now it’s just about turning those moments into consistent performances, then, and only then, Marmoush could flourish into one of the better strikers in Germany.