Portugal remains a goldmine of footballing talent. While the likes of Benfica, Porto and Sporting Lisbon remain the giants of the game there are talented and interesting players in the tiers below those superpowers. The youth development of the three giant clubs is so good that they develop extremely talented players for their own first team but also for other clubs around the league as players naturally drop down and provide a source of talent for clubs in the middle or bottom of the table.

In this analysis, I have used data to identify five players who are having interesting seasons so far in Portugal. Of the players identified only one plays for one of the top three sides, although one other is on loan from Porto to his current club, I have picked players in different positions so we have a fullback, a central defender, a central midfielder, a winger and a striker.

By using data and individual player profiles to identify players of interest teams can cut through a lot of the noise in markets that they are interested in. We can take a pool of players and immediately identify those that match the profiles of players that we are looking to recruit. This allows clubs that use data within their recruitment department to ensure that any player that they might be interested in meet the requirements that they set out in terms of data output.

While I consider data to be an integral part of the recruitment process it is only one part of that process. A smart club will combine data analysis with live scouting and video scouting to ensure that they are building a full picture of the player that they are looking to sign. 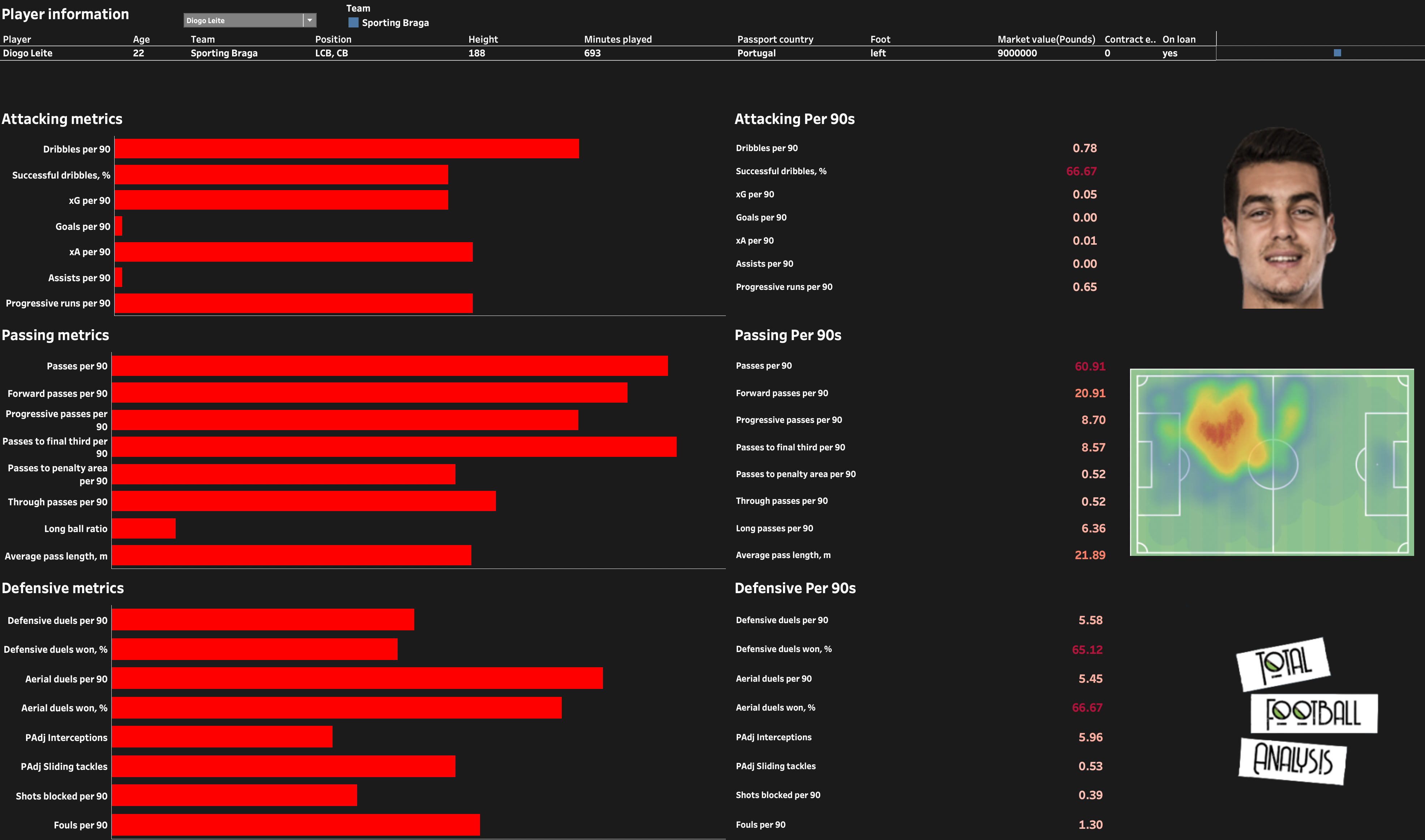 The first player on our shortlist is a 22-year-old central defender who has been highly rated around the game for some time now. Diogo Leite is a left-footed central defender who is listed at 188cm | 6’2″. This season has seen Leite leave Porto in search of regular first-team football in order to further his development. So far the decision to go out on loan has been vindicated as Leite has, at the time of writing, played 693 minutes in Liga Nos.

He is a well balanced central defender who is perhaps most comfortable playing as the left-sided central defender in a four-at-the-back system although he could also play as part of a back three, especially with his ability in possession of the ball. So far this season we have seen Leite average 5.58 defensive duels per 90 with a success rate of 65.12% and 5.45 aerial duels with a success rate of 66.67%. As well as being active defensively Leite also reads the game extremely well. He is capable of defending in a deeper block and as part of a unit but he can also be proactive defensively when looking to step out to win the ball and win the ball before it reaches the striker. This is shown in his 5.96  possession adjusted interceptions.

In possession of the ball, Leite is confident and capable of playing line-breaking passes or switching the play through diagonal balls. He is extremely active in the build-up of Sporting Braga as he is averaging 60.91 passes per 90 with 8.7 of those being classed as progressive passes and 8.57 passes to the final third per 90.

After this season I would expect Leite to return to Porto a more well-rounded player. If he is still not given regular first-team football there though then clubs across the continent will be on alert at the prospect of being able to tempt the defender away from Portugal. 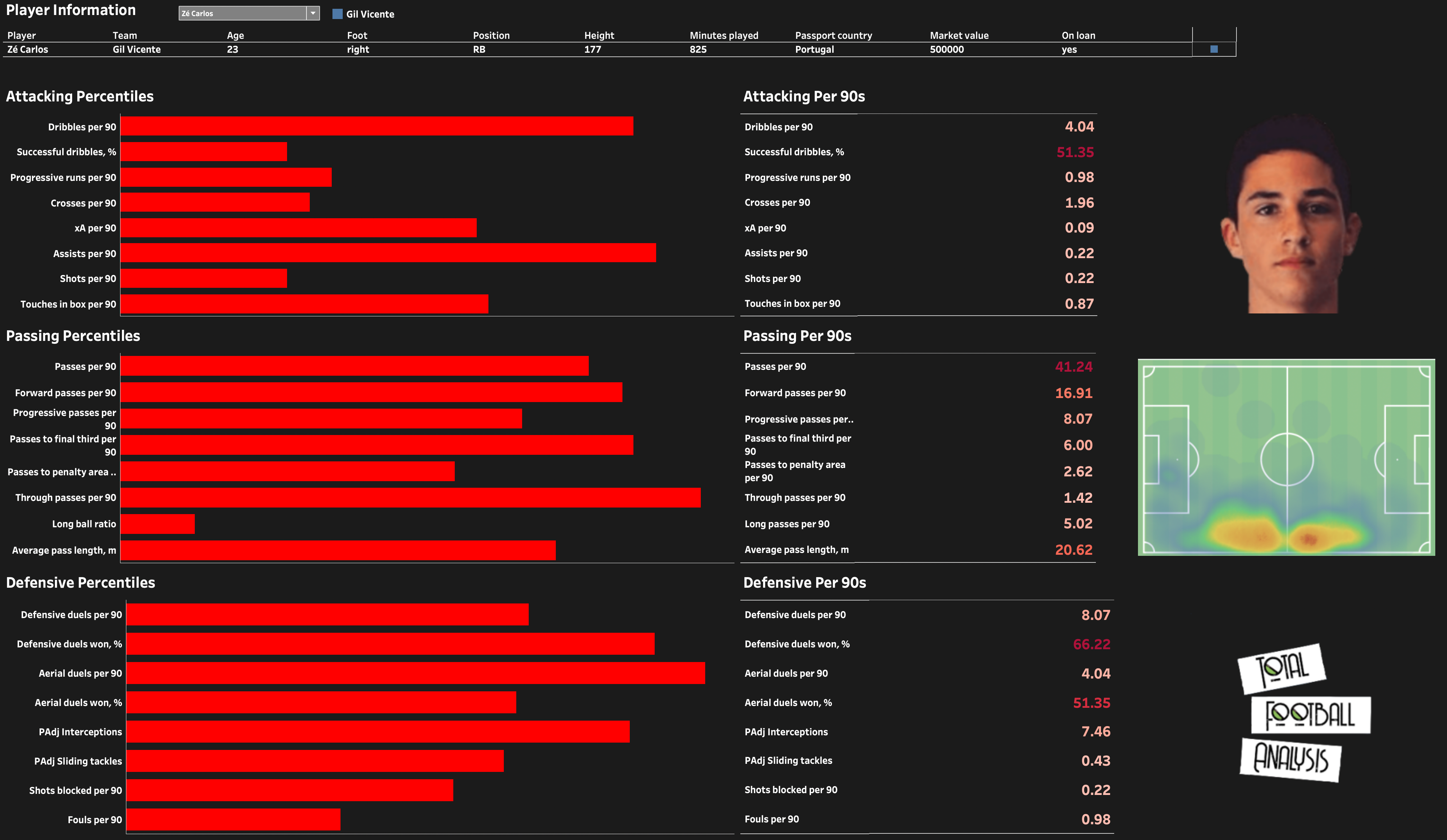 The next player on our list is the 23-year-old right-sided player Ze Carlos. He has at times in his career spent time on the right-side of midfield but he seems to have settled now into his role as an attacking right-back. He is currently spending the season at Gil Vicente on loan from Sporting Braga but there is every chance that he will go on to become an important first-team player when he returns to Braga after this season. Interestingly, Ze Carlos is a player who has had a slightly slower developmental pathway to this point and he has not featured for the Portuguese national team at any age level.

He is a right-footed player who is listed at 177cm 5’9″ with an athletic build. As you can see from his data profile above he is balanced across all three areas of our profile with good metrics in the passing and defensive areas in particular. Defensively he is averaging 8.07 defensive duels per 90 with a success rate of 66.22% along with 4.04 aerial duels with a success rate of 51.35%. This is combined with 7.46 possession adjusted interceptions.

In possession, he is perhaps more effective in terms of progressing the ball through his passing through the thirds of the pitch. He is averaging 41.24 passes per 90 along with 8.07 progressive passes per 90.

Ze Carlos is likely to return to Braga at the end of this season and I would expect that he will challenge for a first-team spot going into next season. 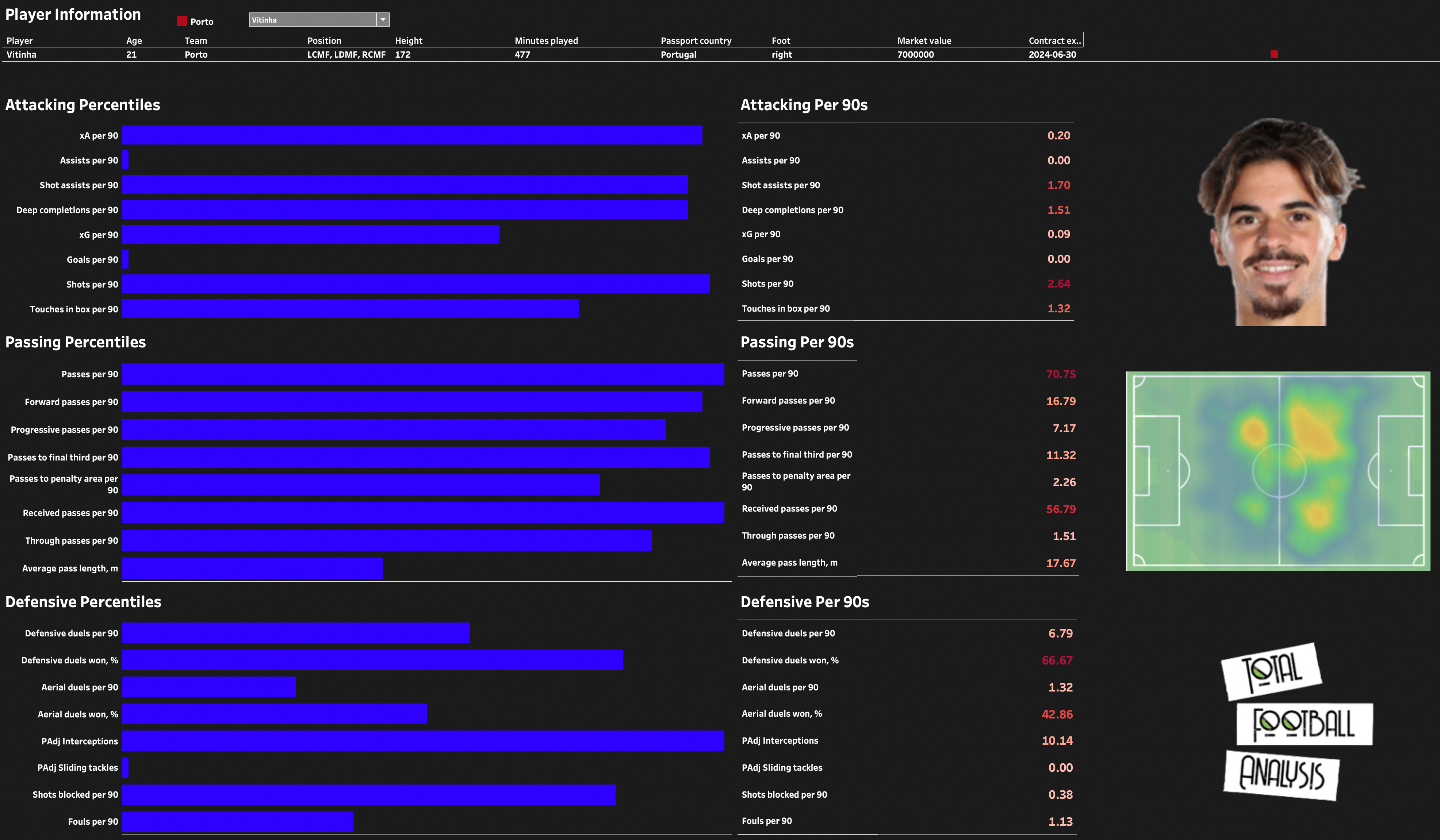 Vitinha is a 21-year-old Portuguese midfielder who is currently contracted to Porto in Liga Nos. He is a product of the club’s youth academy although he actually spent the 2020/21 season on loan in the English Premier League with Wolverhampton Wanderers. Other than that, however, Vitinha has spent his entire career to this point with Porto and he has now established himself as a part of the first-team setup at the club. He has also been capped 20 times, at the time of writing, by the Portuguese U21 national team.

Vitinha is listed at 172cm | 5’7″ and he is predominantly right-footed.

So far this season it is his ability in possession in terms of passing and progression that has stood out. He is averaging 70.75 passes per 90 with 7.17 per 90 of those being classified as progressive and 11.32 per 90 being played into the final third. He is extremely aggressive in possession of the ball with the ability to drive his team forward and create chances against tight defenders. Interestingly, on the attacking side of the game, he is also averaging 2.64 shots per 90, although this has not translated into goals.

Porto have a history of playing central midfielders that they have developed through their own system. Vitinha feels like the next one of the production line although if his playing time drops a move to a top-5 league would make a lot of sense. 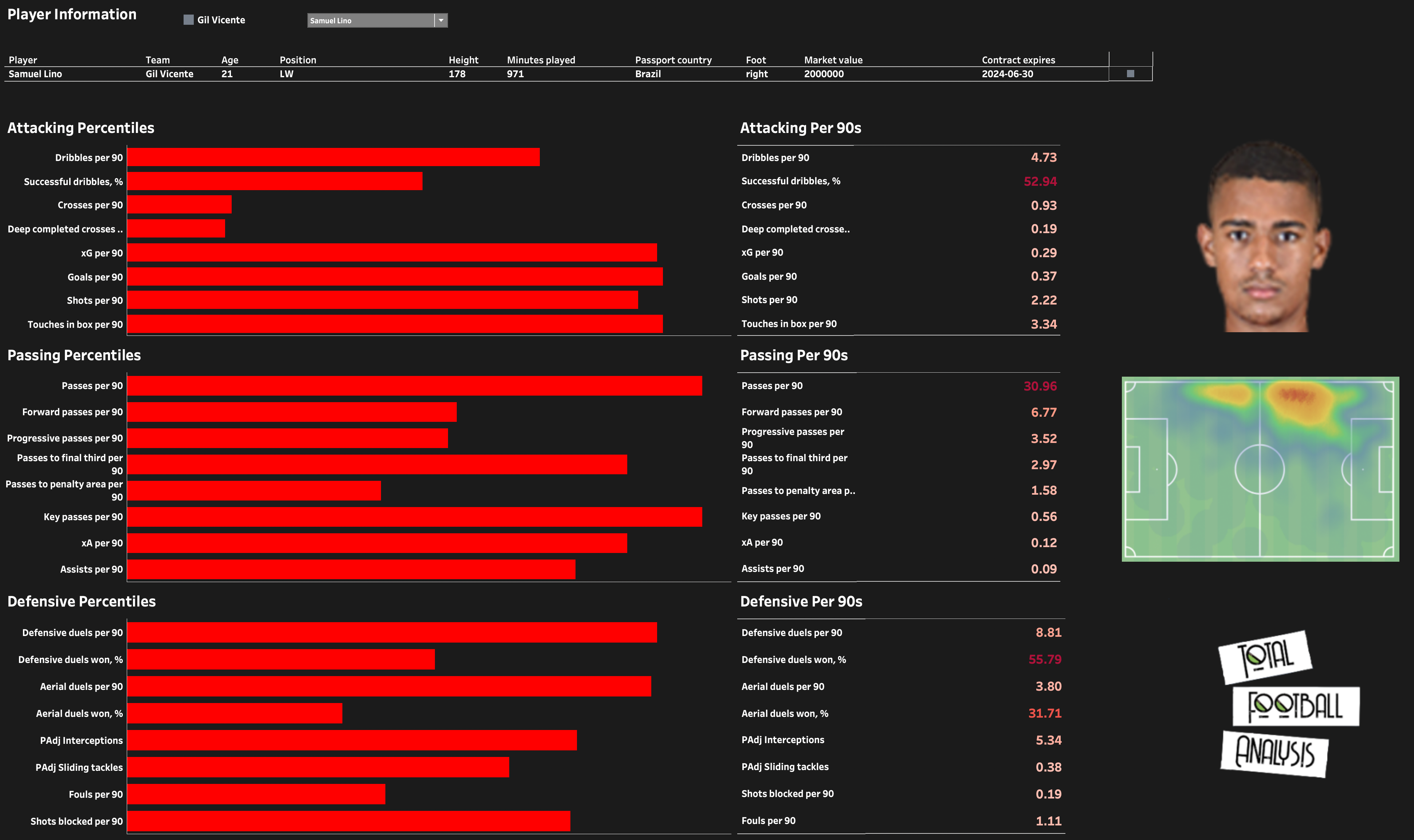 Samuel Lino is a 21-year-old Brazilian left-winger who is currently contracted to Gil Vicente. He initially made the much travelled move from Brazil to Portugal when he left his first club Sao Bernando to join Gil Vicente in 2019. Since then he is a player that I have seen pop up numerous times over the course of the last 12 months with clubs from across football registering an interest in the Brazilian wide player.

He is listed at 178cm | 5’10” and he is predominantly right-footed, although he prefers to play from the left-side of the attack from where he can cut in and attack diagonally.

Lino is a creative player who also carries a genuine goal threat. This season so far he has averaged 0.37 goals per 90 from an xG per 90 of 0.29. This is from 2.22 shots per 90 and 3.34 touches in the opposition area per 90. While he is not really a ball-carrying winger (4.73 dribbles per 90) he is a winger who can create in the final third with his ability to receive the ball and create opportunities in the final third and around the penalty area.

I would not be surprised to see Lino move on from Gil Vicente at the end of the season with teams from the likes of the MLS and French top-tier in particular having been registered as having an interest in taking the Brazilian winger. 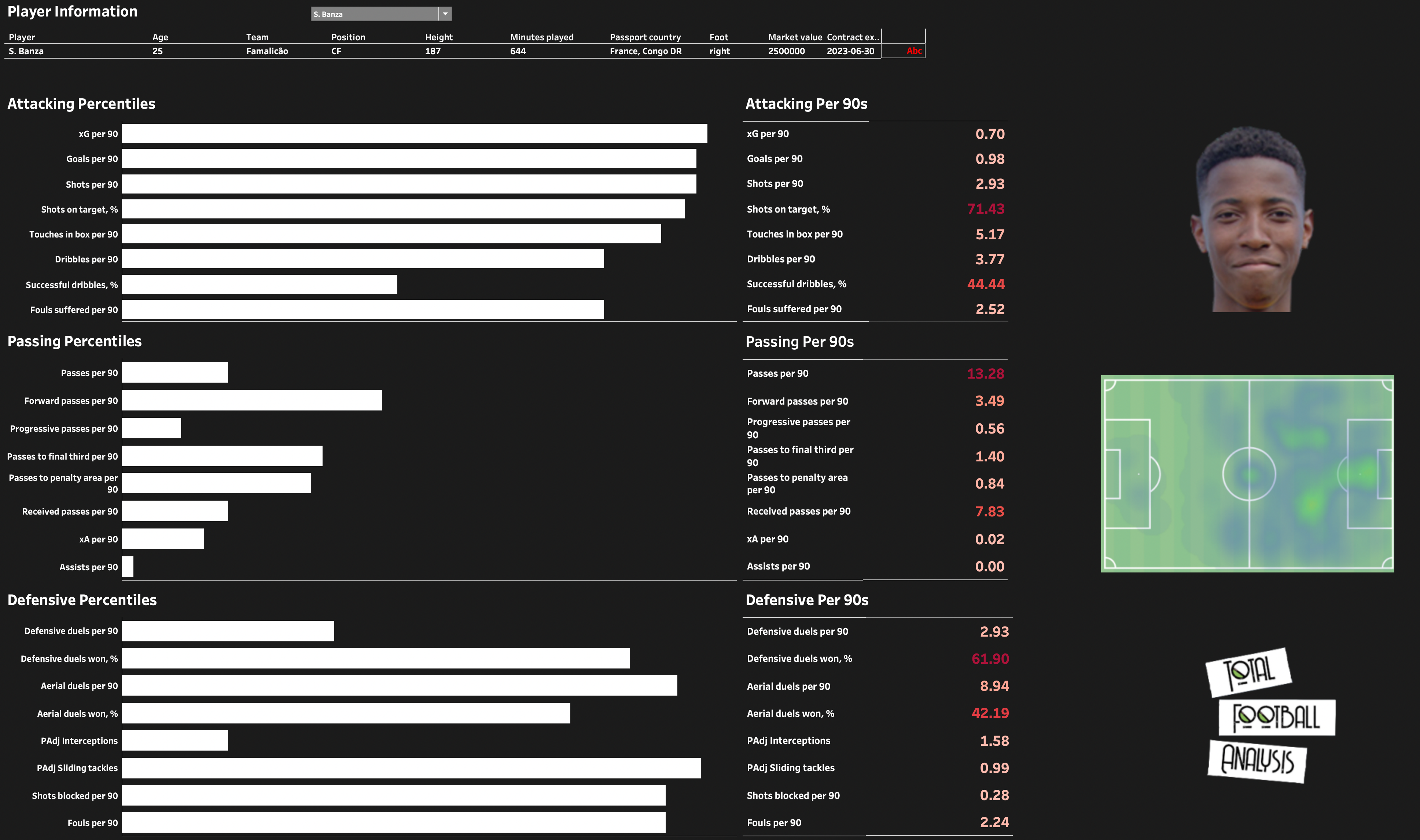 Simon Banza is a 25-year-old French striker who is currently on loan at Famalicao from Lens in the French top-flight although they do apparently have an option to buy. Banza is an excellent forward player for this level and he actually looked very good for Lens last season in the French top-flight. He is a traditional ‘9’ who is capable of playing with his back to goal or threatening the space behind the defensive line. He is a product of the youth academy at Lens.

While Familcao have an option to buy at the end of the season there is a chance that they will not have the financial ability to trigger the deal. If this is the case then smart clubs will be waiting to take advantage of the possibility that Banza would still look to move from Lens.

Liga Nos remains a hotbed for talent but the tiers below the top-3 (or 4 if you include Braga) are also full of interesting options with young players who may not reach Champions League level but still have real potential to have a successful career.