Thomas Partey: His role at Arsenal under Mikel Arteta

Though many Arsenal fans were hopeful of a deadline day signing, most were surprised at the club’s last-ditch attempt in signing Thomas Partey as they activated his £45 million release clause on Monday. Having been linked with Partey and Houssem Aouar for most of the summer, it was clear that Mikel Arteta wanted midfield reinforcements and that’s just what he has now got in the 27-year old Ghanian.

This scout report will provide tactical analysis on Thomas Partey with an overview using data analysis before providing an insight into how Partey may fit into Arteta’s tactics as he bolsters his new side’s midfield. The addition of Partey is likely to increase Arsenal’s chances of qualifying for next seasons UEFA Champions League if he helps them in winning the Europa League or by finishing in the top four of the Premier League.

Thomas Partey has been deployed as the ball-winning midfielder in Diego Simeone’s Atletico Madrid four-man midfield for a number of years, this has meant that he has generally played with a midfield partner, rather in a midfield three. Below is a visual comparing Partey with La Liga and Premier League midfielders who completed 25% of their team’s minutes. 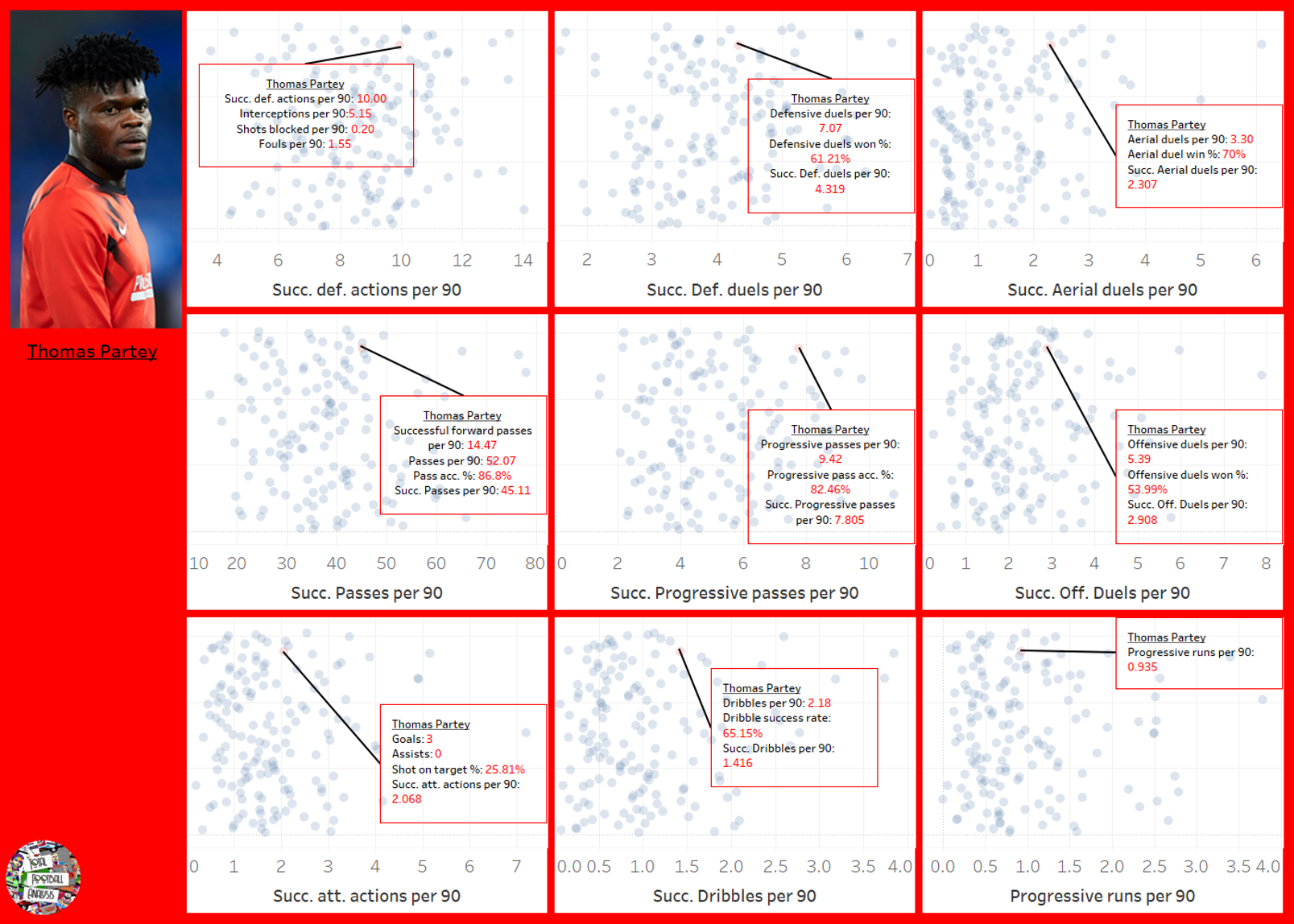 Partey is a well-balanced midfielder, he performs well in the attacking and defensive aspects of the game. Notably, his defensive strengths are in his interceptions, as he made 5.15 per 90, and his strength in duels, especially his aerial duels where he had the best aerial success rate of the players in the database at 70%. His defensive awareness and positioning will be highlighted in the video analysis.

The Ghana international is also very good in the technical aspect, particularly in the progressive aspect of the game, where he made 7.81 progressive passes per 90. He is also a strong dribbler having made nearly one progressive run per 90, strong given he made these runs in a defensive midfield/deep centre midfield role, so would have had to have dribbled 15 (dribble only in own half) or 30 yards(dribble from own half to opp. half) with the ball for it to be classed as progressive.

Blocking problems between the lines

It remains to be seen how Partey will affect Arteta’s tactics. Will the Spaniard retain his 3-4-3 and play Partey next to Dani Ceballos/Granit Xhaka as a ball-winning central midfielder or will he switch to a 4-3-3 or 4-2-3-1 formation and play him as a defensive pivot? Either way, he is likely to occupy deeper positions than his midfield partner/s when the opposition attack to break up attacks that look to exploit between the lines. This section will highlight Partey’s defensive awareness and positioning.

Arsenal have been weak in defending half spaces and wider areas. They have done well at congesting the central areas, however, if you analyse goals from this season alone, the goals have mainly come from movement and passes within the half space and the touchline.

Below, Mo Salah dribbled past Kieran Tierney after he received the ball in a wide position.

Salah is able to drive into the circled region, before having a shot at Bernd Leno, Sadio Mané then scored the rebound.

Mané had the ball and Partey is intelligent to see the potential danger of Mané passing to Georginio Wijnaldum as he covered the space behind right-back Kieran Trippier.

Partey’s positioning forced Wijnaldum to turn away from goal rather than drive towards the goal. Partey then proceeded to tackle him. This will be something that Arsenal fans should see as he will help to prevent opposition attackers making on the ball runs between the lines into the area or by tracking off the ball runners who could provide a danger to the Arsenal goal. Another example of this positioning is shown below as he is in a position to track the cutback cross. 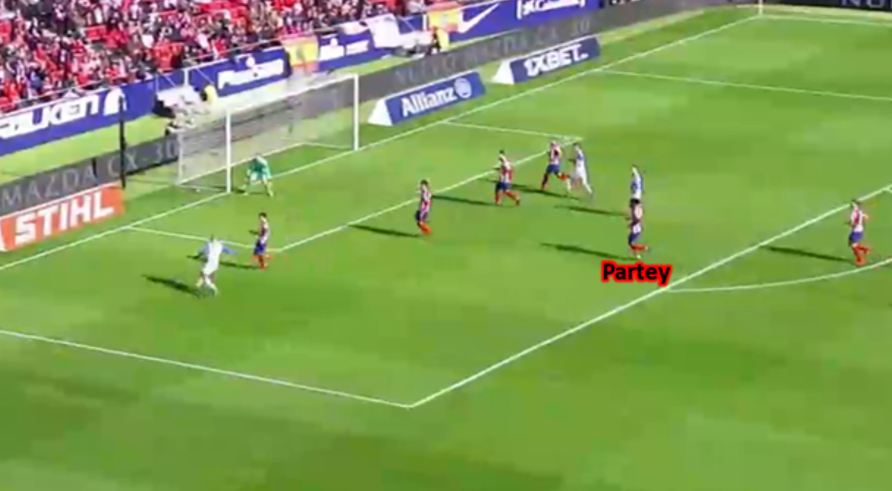 As mentioned earlier, it remains to be seen how Partey affects Arteta’s tactics. Arteta has looked to apply a non-aggressive low block in the opposition half to allow for a high block when the ball enters the Arsenal half. If the Arsenal front three press is surpassed by the opposition, Partey will look to act on the situation as he is the next line of defence, if the type of block mentioned above is kept in Arteta’s tactics.

Arsenal pressured 43.8 times in the defensive third per 90, 56.8 times in the midfield third and only 30.5 times in the final third, this season. Partey will thrive in contesting duels in a congested defensive/mid third, as Arsenal look to block compact, limiting the space the opposition can play in. An example of Partey’s ability to pressure quickly in the middle of the park is shown below.

Mane is shown to have dribbled past Partey’s teammate.

In comparison to other Arsenal central midfielders last season, Partey looks a defensive improvement, he had the best success rate in defensive and aerial duels and made the second most interceptions, just behind Lucas Torrera. Below shows the transition for Chelsea’s first goal and how Partey’s strength in duels, as shown above, could have stopped it.

Mason Mount received a pass between the lines

Ceballos was unable to prevent Mount’s run away from him. Partey’s pace and strength in tackling could have put a halt to Mount’s run.

If deemed necessary, Partey will drop in between the lines of the defence and midfield to oppose opposition attacks. He can read the game well to react to opposition attacking players, he is highly proactive when acts as he made 9.94 defensive actions per 90 last season. Though, it is difficult to quantify work rate and stamina unless you have very detailed statistics, if you analyse his performances you will see he is highly active in contributing in defensive and attacking situations.

His aerial duel success rate, as mentioned earlier, is the best in the database at 70%. This will be key for Arsenal as they conceded 11 goals after set pieces last season, their 43% success rate in aerial duels was the second-worst in the league and Partey will look to improve this to reduce the opposition threat from aerial situations and to win aerial duels in the mid third from sides that play direct football.

Many players labelled as ‘defensive-minded midfielders’ lack the technical ability to contribute well to the side when they regain possession. Partey will not be the creative player like Arsenal transfer target Aouar, however, he will improve their help transitions from defence to attack. It is rare for a player to be able to regain possession from the opposition so well and then be able to distribute/carry the ball in an effective way to help the side’s attacking transition.

Elneny has performed well for Arteta this season but has relied on his midfield partner, Ceballos or Xhaka, to provide runs or passes to drive the team forward. Below is an example of this. 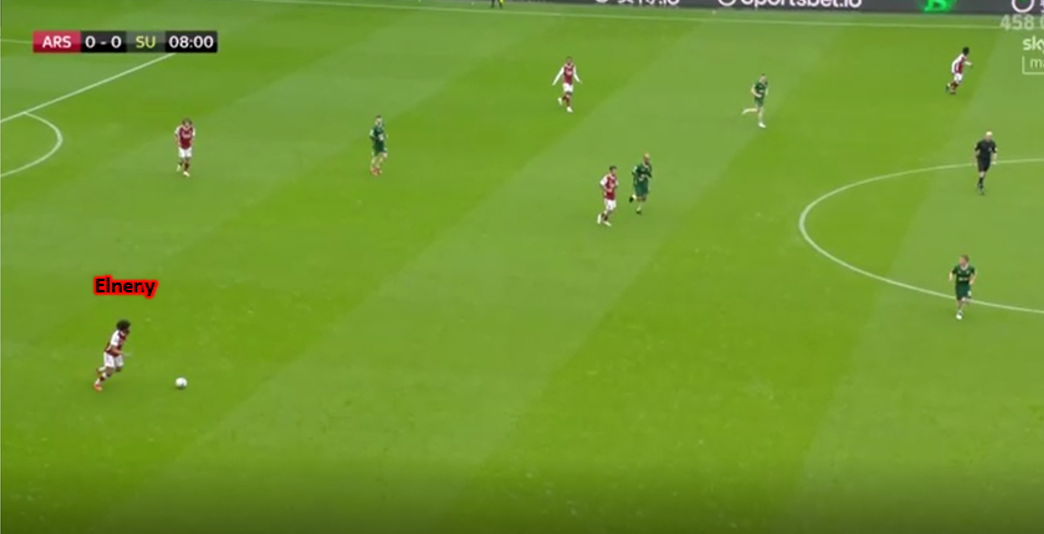 Elneny received the ball in a large amount of space just inside the defensive third.

Elneny drove with the ball into the mid third before he turned back and passed to David Luiz (red arrow). He could have passed to Hector Bellerin on his right as his passing lane was free or passed to Willian (if he had held onto the ball for less time before the Sheffield United block shifted to the Arsenal right-hand side of the pitch).

Above is an example of a Partey forward pass. His passing ability, vision and confidence in passing ability are impressive as he is able to pass between the lines well and this will reduce the reliance on his fellow midfielders to help drive the team forward.

Last season, Arsenal played with a match tempo of 16.9, this was below average and this low tempo allowed the opposition to recover in their low block. Partey provided 7.82 successful progressive passes per 90, more than any of the Arsenal central midfielders last season. This will be key in helping to break high/mid blocks when he has possession in his defensive half or against lower blocks in the opposition half such as the pass below which nearly helped Atletico get behind the opposition backline.

Partey made a progressive pass behind the opposition defence to find Alvaro Morata, below. Morata’s poor first touch meant that it didn’t lead to a shot but Pierre-Emerick Aubameyang would thrive off this type of pass.

Characteristic on the ball to create space

This is a brief section but details Partey’s ability to create space to provide these progressive and forward passes spoken about earlier. A common theme from video analysis has been Partey’s heavy first touch in certain situations, but it appears on purpose, he has this heavy touch to drive away from the opposition defender and open passing lanes that he may not have been able to open from his previous position.

Above, Partey hears the call of teammate Koke, to be able to successfully make this pass he needs create an angle for himself to pass the ball so the Liverpool block can’t intercept the lane. Partey moves into the position below in one touch. 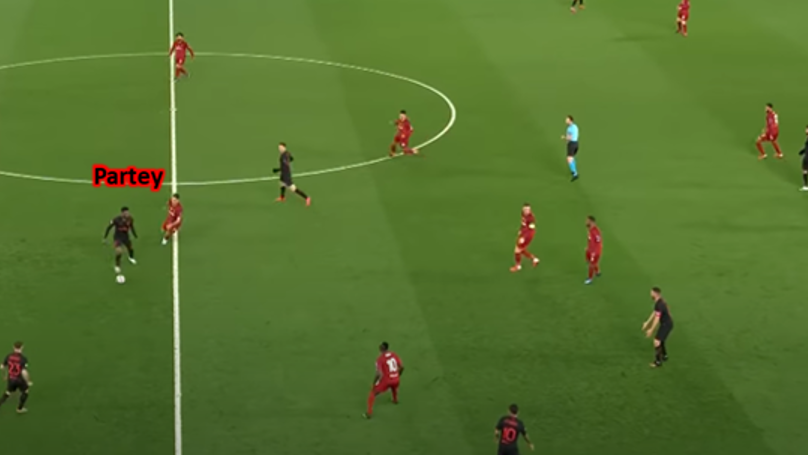 He can then take one more touch before finding his teammate and this will be a characteristic, an intelligent one to create space, to look out for.

The other attacking strength that Partey possesses is his dribbling. Partey’s 6ft 1in build allows him to protect the ball well and retain possession as he was successful in 65.15% of his 2.18 dribbles per 90.

Below is an instance against Liverpool where Partey does incredibly well to help Atletico Madrid win possession of the ball in the defensive third before he dribbled through the Liverpool team to reduce the pressure on the backline and move his team further up the pitch, on his own.

There is a scramble for the ball on the edge of the 18-yard box. Impressively, Partey is able to turn and drive to his left, as Sadio Mané wrongly predicted Partey’s movement.

Here, we see Partey has turned well with the ball, showing his agility, to now drive away from the Atletico Madrid goal and Mané.

Again, his agility and skill is shown as he is able to manoeuvre his way past Jordan Henderson before he poked the ball past Trent Alexander-Arnold, towards a teammate.

The video analysis in this section has displayed his dribbling and ball-carrying ability. How will this be of help to Arsenal?

Arsenal like to play short passes, even when under pressure in their defensive third. Many will notice that Ceballos has taken charge of Arsenal’s transitions from defensive third to midfield third via passes and dribbles. Partey’s ability to progress the ball forward can allow Arsenal more versatility in their attacks as Partey has the technical ability to rival that of Ceballos. The progressive runs will also help create space for Ceballos and other attacking teammates as the opposition are attracted towards the ball.

This scout report has provided an insight into Partey’s main strengths and how these strengths can improve this Arsenal side. The main thing that Partey will help Arsenal in is his power in defensive duels and his defensive awareness to win the ball back and from this, helping the side transition as his data shows that he is competing at a technical level, close to Arsenal’s most technical midfielders.

If Partey’s performances against Liverpool are anything to go by, Partey should adjust to English football and the pace of it quite quickly. His technical ability is a real bonus on top of his outstanding defensive ability. Arsenal’s core is shaping up nicely and their newest addition could help them challenge the biggest clubs, if last weeks matches are anything to go by!