Kepa Arrizabalaga’s underwhelming performances since signing for Chelsea have been well documented. The Spaniard had one of the lowest save percentages within the top five leagues throughout the 2019/20 season. However, Chelsea will be hoping they’ve found a replacement for Kepa in the form of Édouard Mendy. With Chelsea already spending over £200m this transfer window, they’ve now recently added 28-year-old Mendy to their squad.

This tactical analysis will look at how Mendy can improve a Chelsea team that have their eyes set on the Premier League title, and how he will fit into Frank Lampard’s tactics. This analysis will look at his shot-stopping performances and whether he is an improvement on Kepa, his sweeping and passing abilities and whether his playstyle will be a good fit for Chelsea.

How does Mendy compare to Kepa and the top five leagues?

To get a good understanding of Mendy’s signature and how he compares against Europe’s best goalkeepers, we can compare him to his peers in shot-stopping and passing. 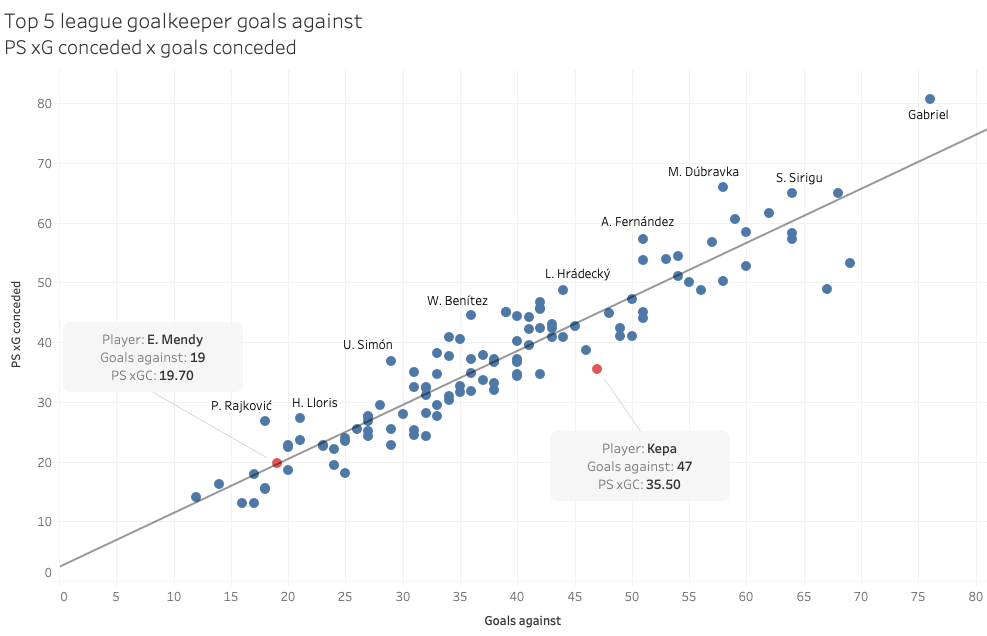 The above graph measures post-shot xG conceded and actual goals conceded. The players furthest above the trend line have performed much better than expected. Mendy is slightly above the line. With the chances he’s faced, he was expected to concede 19.7 goals, but he only conceded 19. We can see how far Kepa is beneath the trend line, he conceded 11.5 more goals than he was expected to, performing far worse than Mendy. 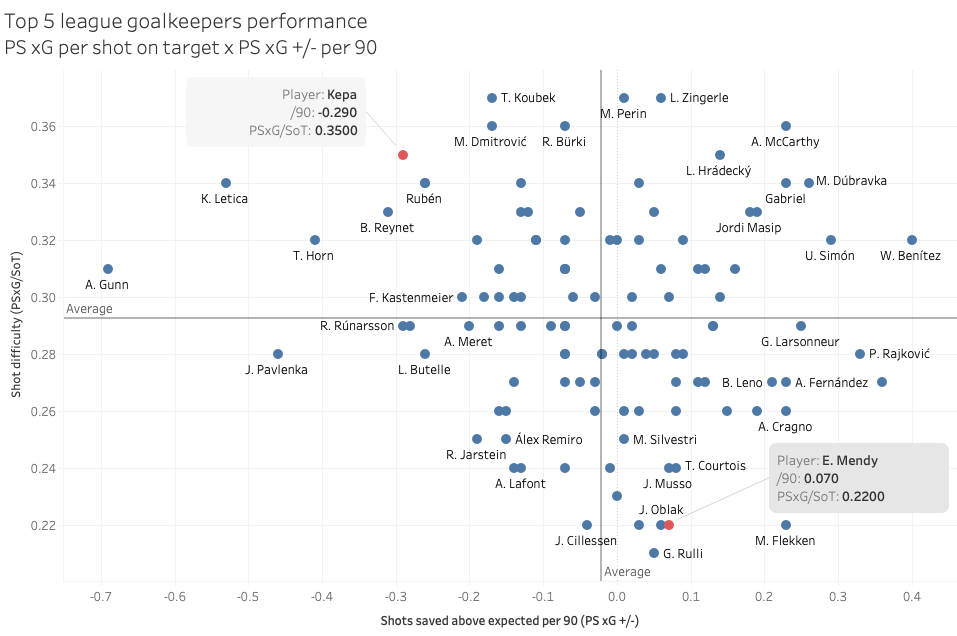 This graph measures each keeper’s true performance through their shot difficulty and shots saved above expected per 90. We can see that Kepa and Mendy are on opposite sides of the graph. Compared to the rest, Mendy faces easier shots whilst saving more goals than he was expected to. Whereas Kepa faces more difficult shots but concedes more than he was expected to. Mendy ranks similar to Real Madrid’s Thibaut Courtois and Atlético Madrid’s Jan Oblak.

To see how easily Mendy will fit into Lampard’s tactics, we can compare his passing stats to Kepa. We will measure each goalkeeper’s pass launch percentage and average pass length. 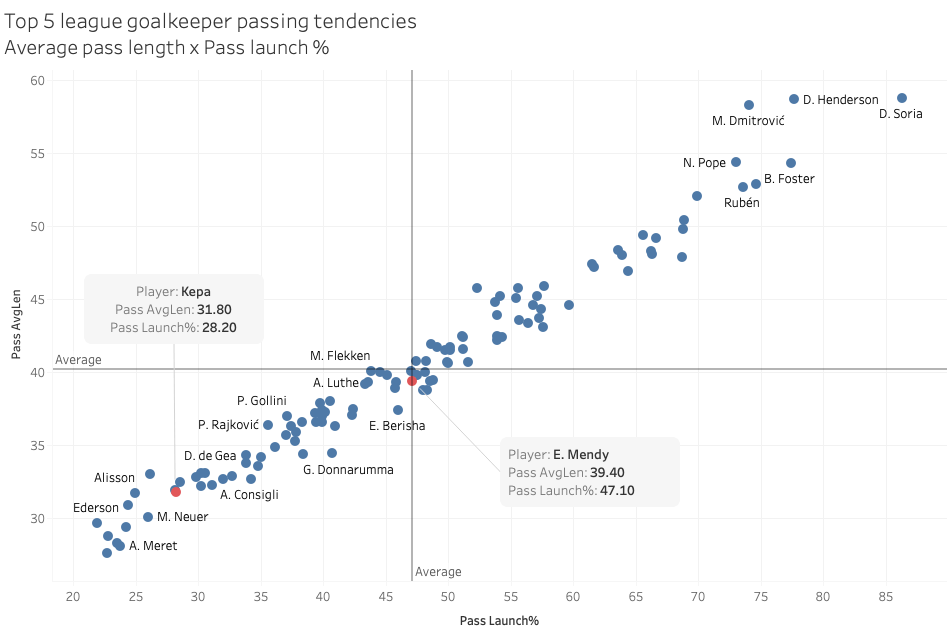 Mendy is roughly average in both stats. He launches about half of his passes (47.10%) and has an average pass of 39.4 metres. Kepa has much more of a tendency to play short. The Spaniard only launches 28.20% of his passes and his average pass is 31.80 metres. These stats are often reflected by their team’s playing style, so we will analyse later on whether Mendy has the skillset to directly replace Kepa.

A more reliable shot-stopper than Kepa

Kepa’s inability to stay consistent whilst facing shots has been one of his biggest shortcomings since joining Chelsea. Mendy appears to be much more comfortable, in terms of both confidence and technicality. Ligue 1 was cut short last season, but Mendy and Stade Rennes boasted the joint second-best defence. Mendy has a save percentage of 78.16% whilst Kepa’s is 68.8%.

Mendy stands at 6’6, giving him a huge frame when it comes to preventing the ball from going into his net. However, despite his size, he has incredible reflexes. This is one of the main reasons his save percentage is so high because he is able to stop shots close to his goal from point-blank range.

21% of the goals Rennes conceded came after a set-piece during the 2019/20 season, showing their defence’s incapability to deal with corner and free-kicks. Above is an example where Mendy produces an excellent reflex save to prevent this stat worsening. The headed shots comes at him at pace from just inside the six-yard box. Mendy uses his athleticism to spring himself into the air and tip the powerful shot over the bar. He saves a shot with a very high goal expectancy.

As well as having great reflexes Mendy also possesses great decision-making skills and concentration, two attributes that are vital to goalkeeping.

In the above example, Mendy is let down by his defence once again. Firstly, they allow an easy shot from outside the box. Secondly, they leave two Lyon players in a lot of space on the right side of the box. Because the initial shot is curled towards goal it’s difficult for Mendy to help it on its way for a corner, rather he is forced to parry it back infield to his left. Knowing that his save is likely to fall to an opponent, Mendy makes a great low block to ensure a double save.

His decision-making skills mean that he is very capable of choosing an optimum one-on-one technique. This is a very overlooked attribute within football as the goalkeeper isn’t expected to save most one-on-ones.

When a goalkeeper faces a one-on-one from a central position, this is when its most difficult to save. This is because the attacker has a lot of the goal to aim at. Whereas if the situation is from more of an angle the goalkeeper can protect more of the goal. In this example, Mendy realises this and makes a brave decision. With not many defenders in the centre of the box, the keeper decides to dive at the attacker’s feet before he gets a chance to shoot. Mendy once again prevents a good goalscoring opportunity with his quick decision making.

Comfortable at sweeping when he’s called upon

Mendy and Kepa are very similar when it comes to sweeping outside of their box. The Spaniard makes 0.64 defensive actions outside of the penalty area per 90 whilst Mendy makes 0.67. However, Mendy is much more consistent at stopping crosses in his box. In the 2019/20 season Mendy prevented 10.2% of crosses he faced whilst Kepa only stopped 7.6%. 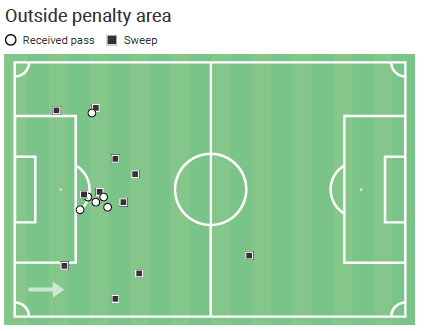 Above we can see that although Mendy doesn’t make a lot of sweeps, he is definitely adept when he is called upon. He is also used to receiving passes outside his box. This is a good sign if Chelsea choose to play possession football to apply pressure to weaker opponents. 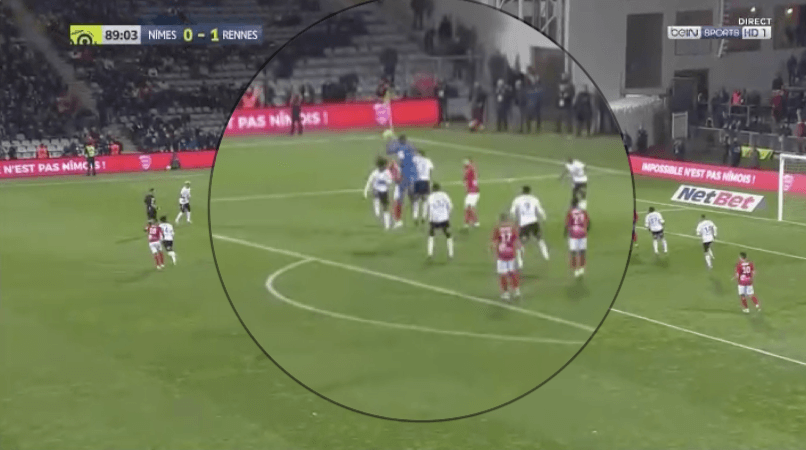 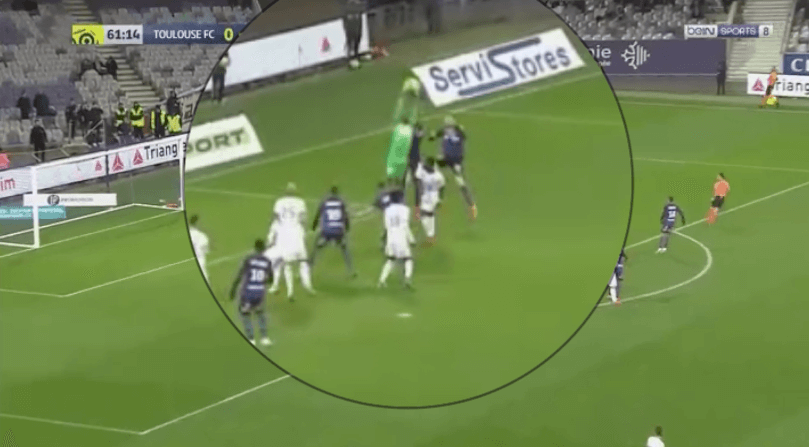 In the two examples above we can see how Mendy’s 6’6 height helps him dominate opposition players and teammates inside his box. He reads the flight of the ball really well and is good at judging whether he should come to claim the cross or not. He makes 0.97 claims and 0.35 punches per 90. A goalkeeper who is confident coming off his line to take actions is invaluable to a team’s defence.

Will Mendy fit into Chelsea’s playstyle?

Mendy has a great range of passing, however, when he was with Rennes, he did tend to pass the ball longer. He often ignores shorter passes and prefers going direct. This is because Rennes and Chelsea have different approaches. Last season, Chelsea played 545.42 passes per 90, whereas Rennes only made 379.55. Also, Chelsea’s average possession was 59.7% and Rennes was 49.2%.

In the above example, Mendy receives the ball outside of his box because his team have pushed high up the pitch. The left-hand side of the opposition is exposed because they’ve loaded the middle part of the field. He ignores the pass highlighted, instead, choosing to go long. This forces a bad touch and slows the momentum of the team down. Whereas shorter passes would enable to team to move the ball forward quicker.

However, his long passing is an asset. He has a fairly high long pass accuracy of 71.21%. This helps in situations where there are no short options available, as seen in the example below.

Here, he has no short passes, so he’s forced to go long. He uses his vision to spot a teammate that’s pulled away from their marker. Because his pass is so accurate to his teammate’s feet, he’s able to pass it first time and the team continue to make a route towards the opposition’s goal. This tendency would help when Chelsea play better teams who prefer to press defenders rather than sit back.

This scout report has proven that Édouard Mendy will certainly be a good replacement for Kepa. The 28-year-old has far better shot-stopping stats than the Spaniard and is currently hitting his peak. Mendy’s stature will give him a good presence within the Chelsea box, something that Kepa doesn’t possess. Mendy’s range of passing means that he has the ability to fit into Lampard’s tactics, however, it will take some getting used to because his former team’s passing style is quite different. The only other worry will be his lack of experience. Having only played in Ligue 1, the quality of the Premier League may catch him by surprise.