Lovro Majer is one of the brightest Croatian talents and currently plays for Dinamo Zagreb. This scout report will contain a tactical analysis of Majer traits and qualities, but also where he needs to improve. Given current Dinamo tactics, he plays most of the time in his natural position as number 10 in 4-2-3-1 formation.

Majer played for NK Lokomotiva before making a transfer to current club Dinamo Zagreb. He is also a part of U21 national team. He was linked with a transfer to Championship side Birmingham City this summer, but Dinamo showed that Majer is in their plans and had a strong start of the season scoring three goals and assisting two times in six appearances in the 1.HNL.

Lovro Majer is a 22-year-old attacking midfielder who can play as a central midfielder and right-winger as well. Transfermarkt values him at 2.3 million euros. He is left-footed and rarely uses his right foot. Majer is a technically gifted player with fantastic vision and passing ability. Looking at his heatmap we can see that Majer even with central roles had most actions in the right half-space because he tends to drift to the right side in order to receive the ball and then cut inside with the ball. We can’t ignore that he sometimes played on the right-wing this season which made an impact on his heatmap as well.

Majer is the main source of creativity in the Dinamo squad. He has all the abilities needed to be a top playmaker: vision, technique, passing and decision making. In this section, we will describe how he contributes his team with his creativity. In the match against his ex-club Lokomotiva in the first match of the new season, he was arguably the best player on the pitch, scoring first two goals and then assisting the third one in a 6-0 win. The situation below is from that third goal, where Majer ended with the assist and it will show us his vision and spatial awareness.

In the image below we can see how Majer goes through two opposition players with third trying to trap him if he continues with the dribble. Majer makes a smart decision passing it to Gavranović and he continues his run without the ball in the opposition area. Gavranović recognises this as a situation to play first touch pass in the open space. 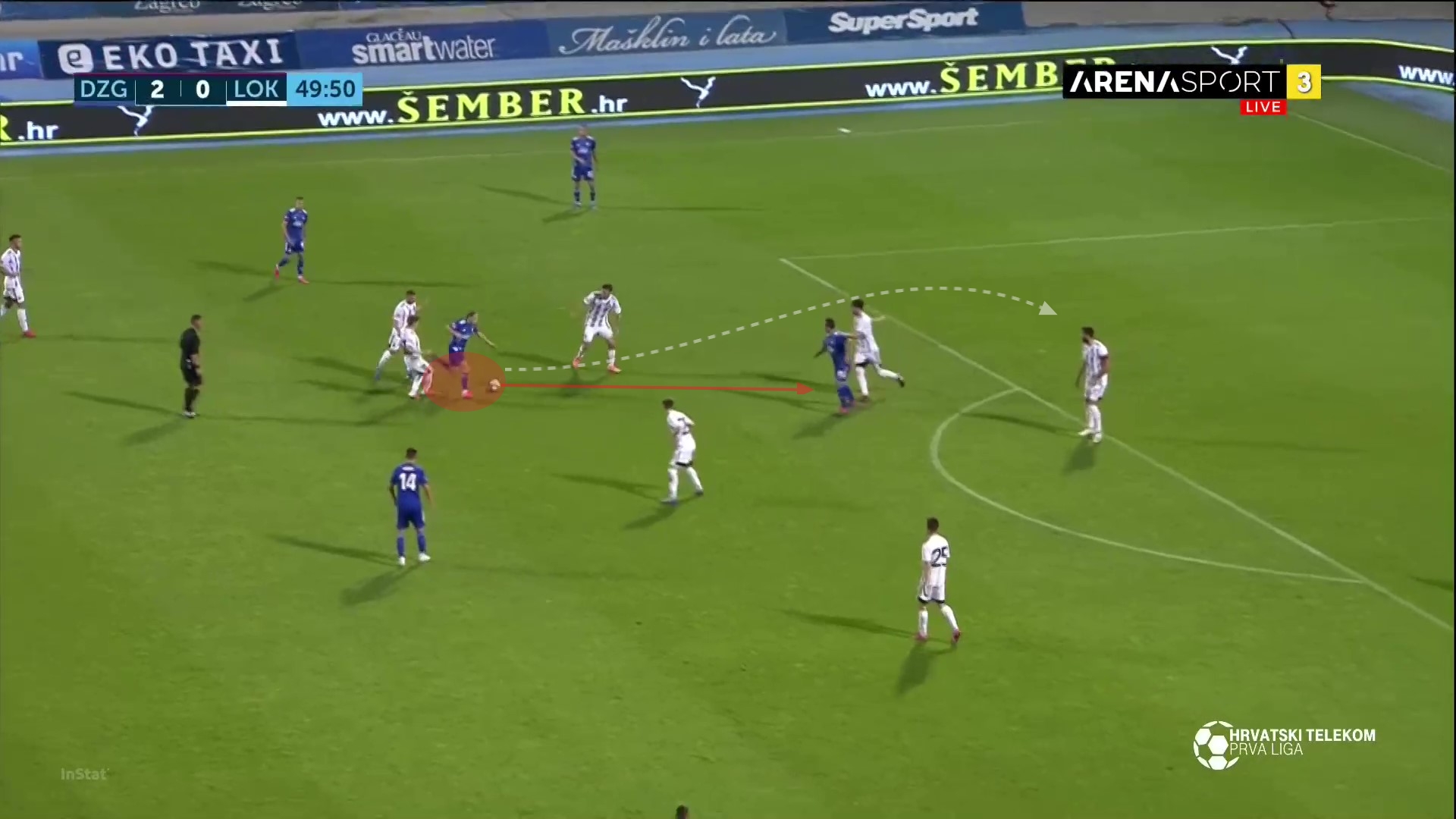 In the image below we can then see how Majer got into the promising situation to shoot with the defender arriving in order to block him. Most of the players would try shooting because there is still enough space, especially if trying to shoot between the keeper and the near post. Majer surprises everyone with perfect inch pass through the legs of the defender for arriving Gavranović who then finishes quality two-player action. On the image below we can see that Majer after playing the ball down the flank to Stojanović he starts jogging towards the penalty area. He loses his marker (#3) getting into his blind spot which triggers player #3 to help his teammate to close down Stojanović. Majer then changed direction to offer a passing option for Stojanović just inside the penalty area. 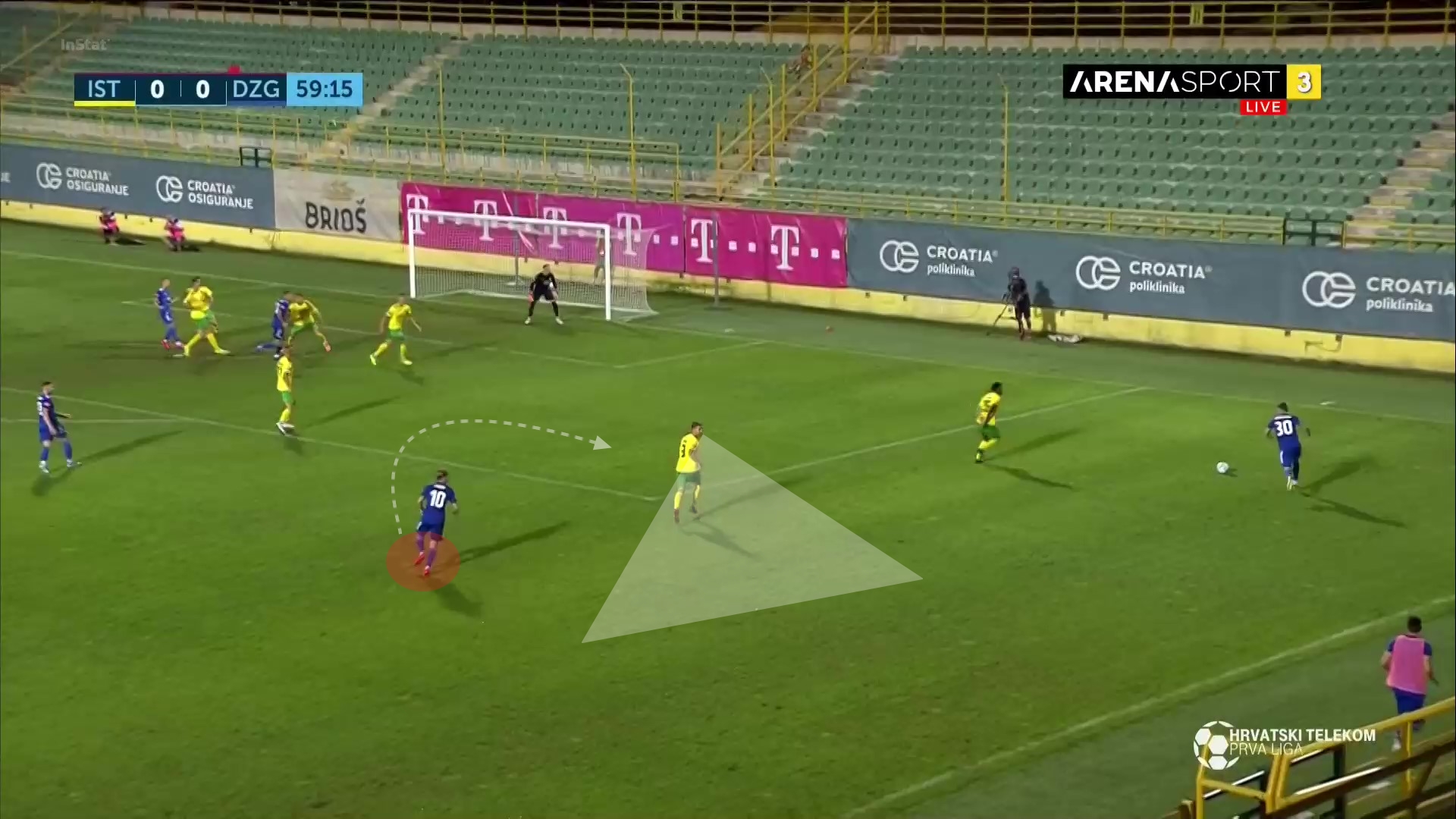 Majer’s movement created him enough space to receive the ball and take a shot which most players would do, but instead of taking a shot, he found Oršić unmarked on the far post with the perfect chipped ball. 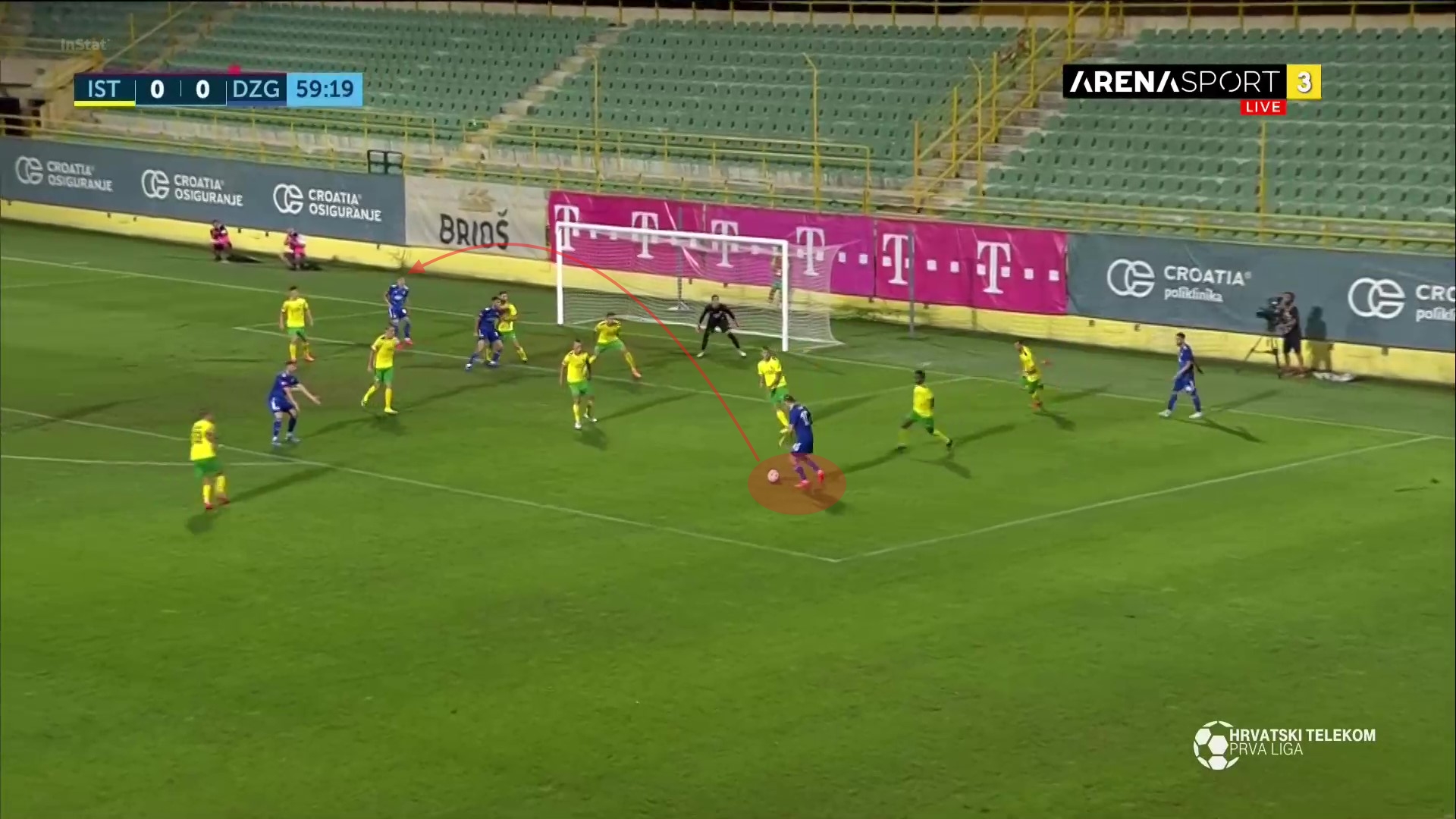 These two situations are just drop in the ocean of Majer’s performances and his extraordinary vision combined with a soft touch on the ball is surely something that excites football fans who watch his games. We saw on his heatmap that he drifts to the right flank where he often receives the ball and then passes towards the goal in order to get the ball back in one-twos. Majer has amazing ball control in tight spaces, which helps him a lot in the final third to create enough space, before attempting a killer pass for his teammates.

This section will contain two situations where Majer with his quality timing and spatial awareness exploits open spaces in opposition defence. The work rate and off the ball movement are the main qualities that separate Majer from traditional playmakers, who are disappearing because their off the ball ability is not sufficient for modern football. 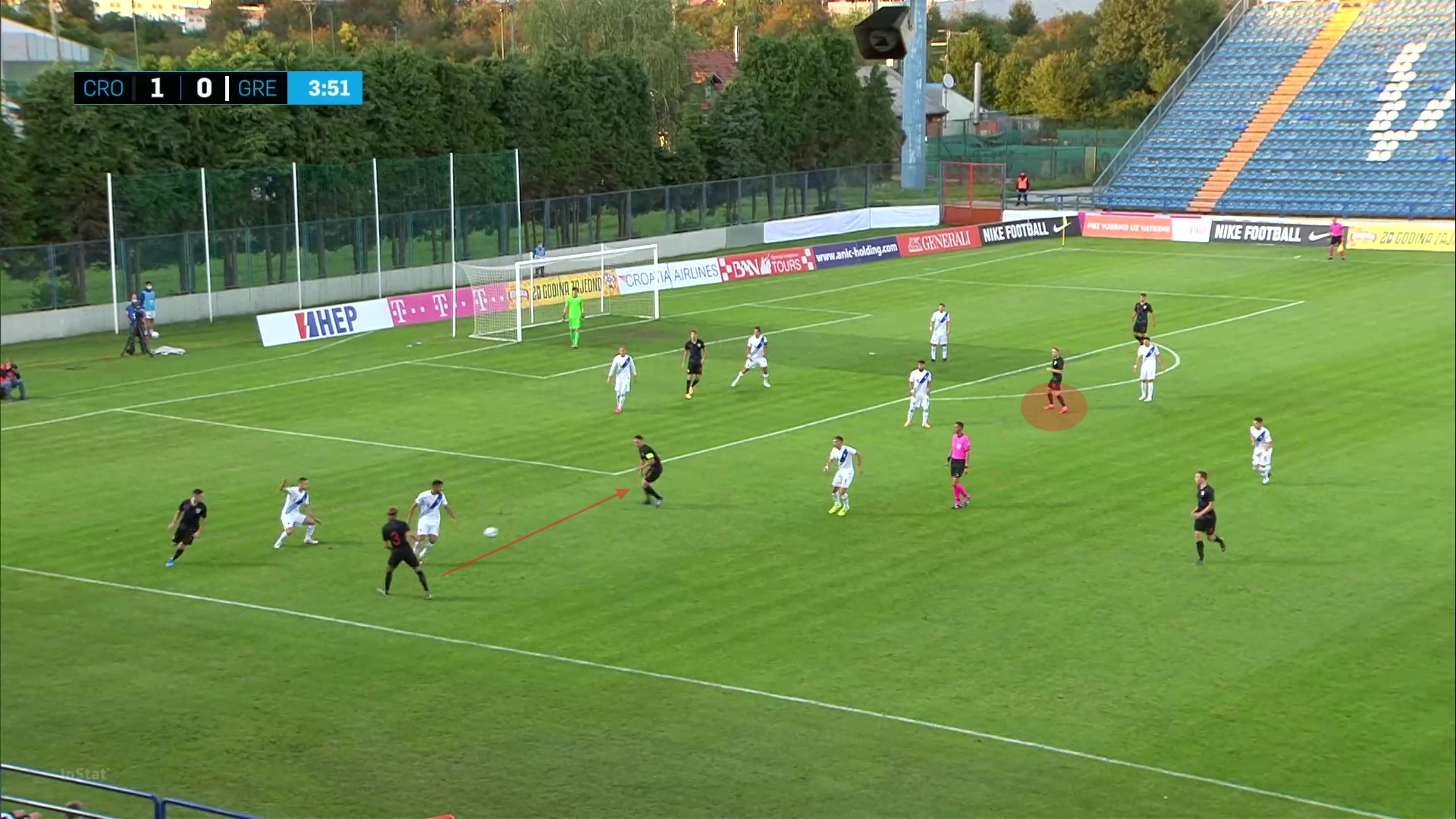 The image above shows us how Majer positioned himself between two opposition players right outside the penalty area. Majer reads the situation on the left side to determine where he should direct his movement. 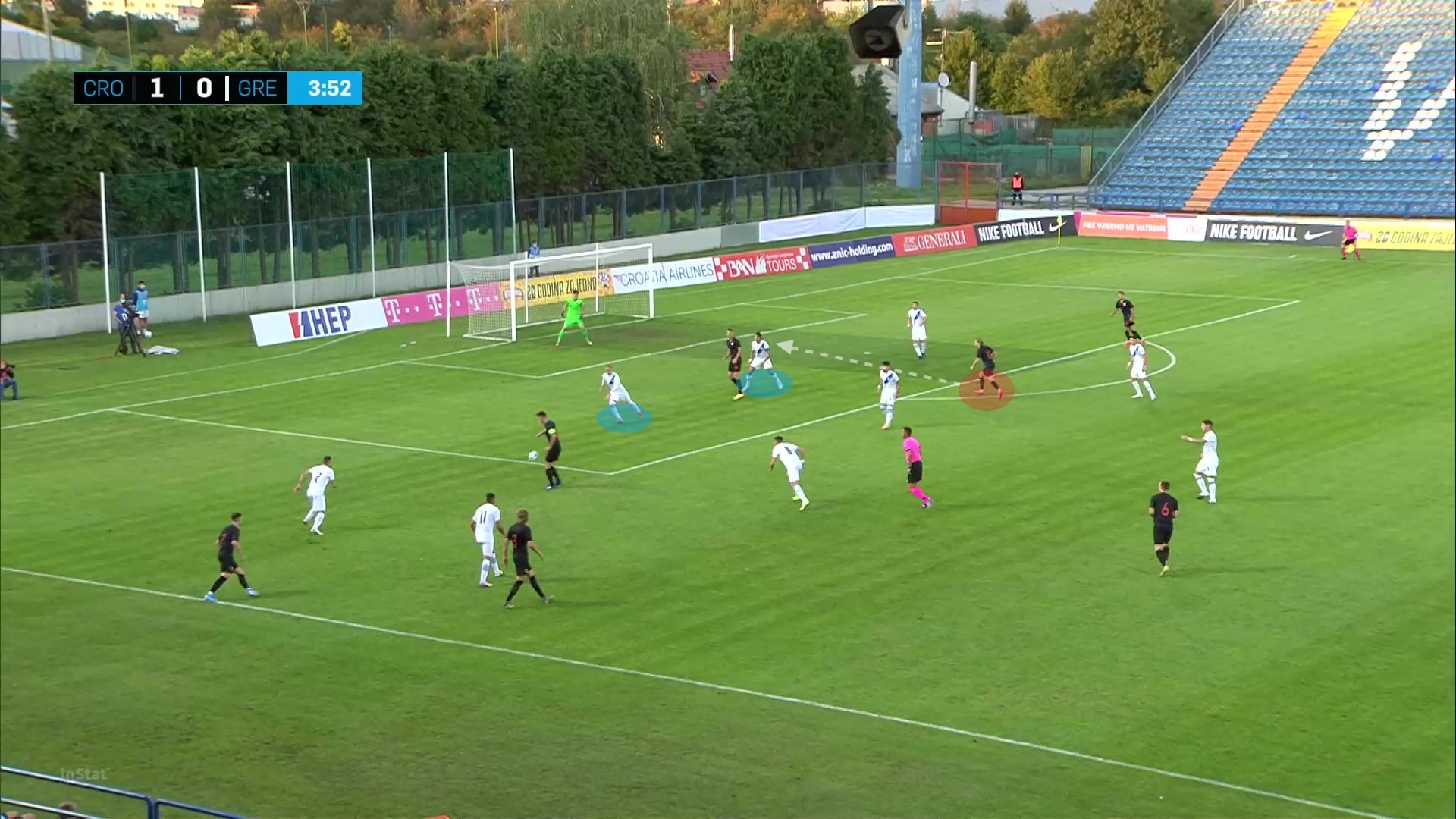 Sosa’s pass toward Moro triggers opposition right centre-back(marked blue) to attack Moro to prevent him from coming into the penalty area undisturbed. When Moro received the ball, Majer started his run in the open space between left-back and left centre-back, aiming to receive the ball between the 6-yard box and penalty spot. Left centre-back tightly marks Musa(striker) which allows Majer to get into the penalty area unmarked. Moro’s cross was perfect which ended with Majer scoring the header. What is exciting is that Majer didn’t rush into the penalty area before Moro had the ball under control and when the defence gave attention to Moro after his first touch, Majer took the perfectly timed run which left defence powerless.

The image below shows another situation where Majer can hurt the opposition, this time with a run behind the defence. Gavranović slight separation from defence to receive the pass drew attention from two defenders dragging them out of position leaving the space behind them. Majer starts his run right before Gavranović receives the ball and that leaves the second defender petrified because he doesn’t have enough time to close the gap. Gavranović and Majer have a good understanding of each other and Gavranović make slight contact with the ball directing it perfectly in Majer running path. 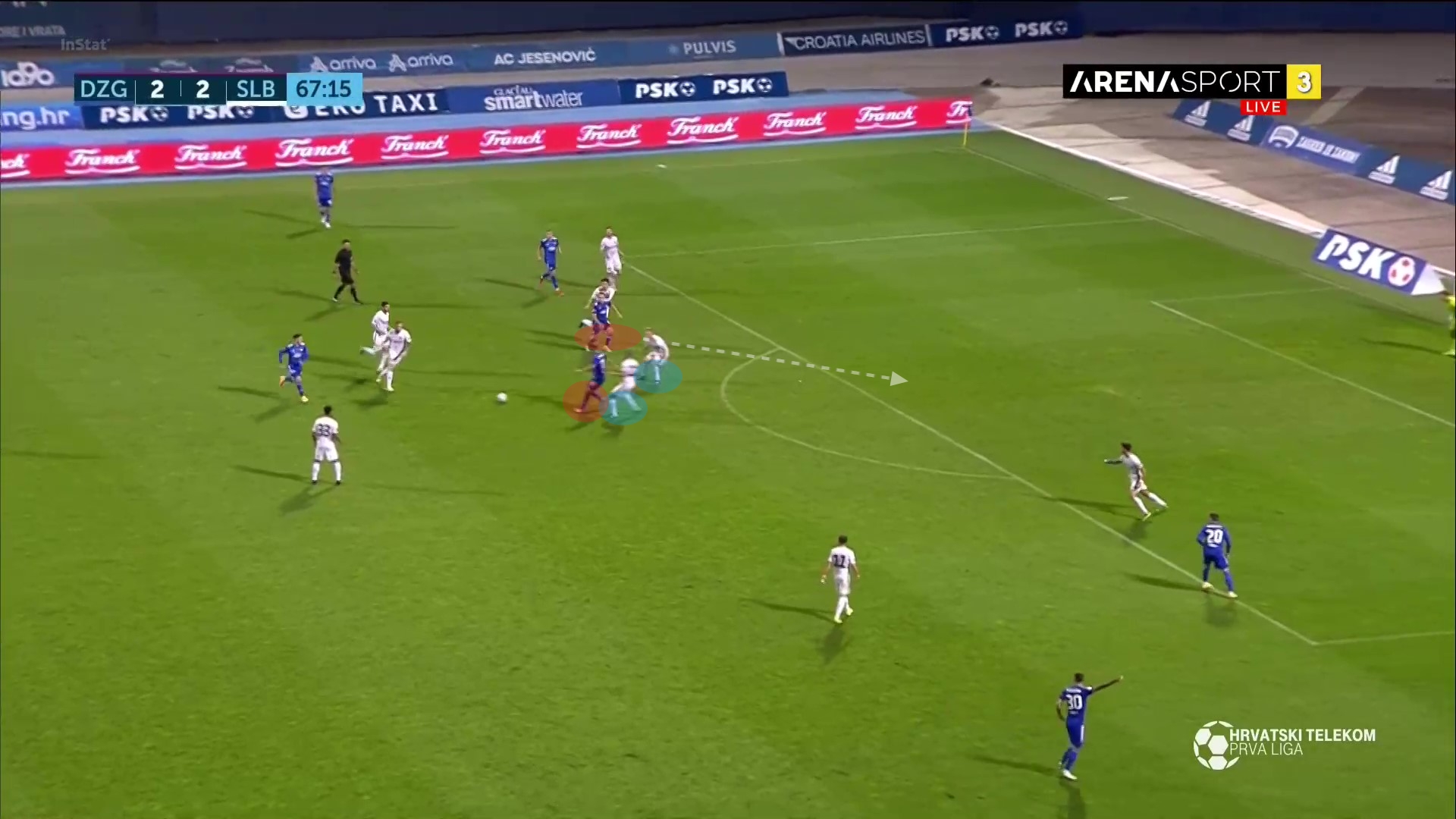 Another movement that Majer often makes is slowing down his run towards the penalty area to create more space separating himself from opponent defence to receive cut-back passes on the edge of the penalty area. The analysis in this section proves that Majer has qualities which fit into the modern playmaker role. Not only that he can endanger the opponent when having the ball in his feet with passing, but also with his smart off the ball runs into open spaces.

In this section, we will mention where Majer has room for improvement. Given his technical qualities, it is a little surprising that Majer avoids using his right foot most of the time. Sometimes spending too much time adjusting his body on his left foot allows opponents to adjust defence preventing promising situations. Defensive duties and duels are attributes where Majer needs to work the most, to play on a higher level it is important to work on his pressing work rate given the rise of pressing philosophies among the clubs in top leagues. Consistency is something that Majer had a problem with the last two seasons, it was hard to get into form because of many rotations in the squad and also Dani Olmo – who’s now playing at RB Leipzig – was a big obstacle to Majer’s playing time. This season Majer seems like a starting XI player which will give him enough playing time to improve on his weaknesses.

Majer made a hot start into this 1.HNL season and it indicates that finally, he is on the path to fulfil his potential. Future is bright for Majer and he could earn himself better transfer next summer than already rumoured Birmingham City. Spanish La Liga would suit him the most given the technical and passing ability he possesses.