Bundesliga is undoubtedly one of Europe’s top divisions. Known for its electric matches with lots of transitions and goals, the league has seen different styles being introduced with many teams playing possession-based football and trying to attack through positional play. Another development in the Bundesliga is the number of young players that are getting minutes in the league for their club’s first team. In the 2018/19 season, players aged 20 or below played a total of 33.741 games during the league campaign, with 24 of those appearing in 10 games or more. These are very big numbers when compared to other top European divisions like in the Serie A (21.761 minutes/14 players), La Liga (20.688 minutes/14 players) or the Premier League (19.081 minutes/12 players).

To keep up with the young talent that is going to feature in Bundesliga, this data analysis will use statistics to discover the best teenagers in the league. An analysis of several key metrics will allow for a comparison between the players in different aspects of their gameplay. In the end, a list of the best five teenagers in the Bundesliga will be compiled based on the result of the previous analysis displaying their individual data profiles.

For this analysis we are going to use data from Wyscout regarding the player’s last season, because the new season has just started and there is not enough data for an accurate analysis to be made. Our data pool will be all players 19 years old or younger that played at least 350 minutes last season so we can have as much accuracy with the data as possible without leaving out a lot of players. With all these filters applied we were left with nine players in total.

To start off this analysis we are going to take a look at the players’ overall success in the actions they perform in a game. In order to do so, a scatter plot was created with the metrics successful attacking actions per 90 and successful defensive actions per 90 on both axes.

The second aspect that we will be analysing is defending. In order to measure the player’s defensive output we created a scatter plot with the metrics aerial duels won (%), defensive duels won (%) on both axes and the size of the squares was set to display the amount of PAdj interceptions per 90 minutes.

Much like in the previous section, Davies is the stand out player when it comes to defensive metrics. The Bayern Munich wing-back wins 62.38% of his defensive duels and 50% of his aerial duels, having the most balanced profile. He also averages 9.79 Padj interceptions per 90 which is the highest number here. Bellingham and Katterbach present very good numbers as well although with a more unbalanced profile – they both excel when it comes to defensive duels won with 60.78% and 67.48% respectively and average a decent amount of PAdj interceptions per 90 (5.67 and 5.85). But they pair all that with a low percentage of aerial duels won with the Englishman winning only 37.96% of them and Katterbach standing at 38.60%.

Three more players display balanced profiles with decent numbers in the metrics. Massimo and Tolu Arokodare have similar profiles and they both are attacking players; this means that they show decent numbers in terms of duels won but have a low amount of Padj interceptions per 90 because they participate less in the defensive process. Finally, Jan Thielmann is an interesting case. The winger/centre-forward has the best win rate when it comes to aerial duels (54%) and also does fine in terms of defensive duels won (55%) but where he really surprises is with his 6.19 Padj interceptions per 90, which is the second-best of the lot.

In this section we are going to take a look at the player’s passing abilities, furthermore, we will look to analyse which players can be progressive through passing or carrying the ball.

Next, we are going to take a look at the player’s ball progression abilities with the metrics progressive passes per 90 and progressive runs per 90 used to make the scatter plot.

In this section, we are going to analyse the player’s creativity as well as their contribution to creating chances. We will also look at different metrics to see which type of actions do they perform that create danger for the opponents.

To finish off this section we are going to take a look at the players’ ability to create danger and chances through shooting. For that, we are going to analyse their shot volume and accuracy as well as the xG value of the shots they take.

Arokodare is the player with the highest and the second-highest numbers in both metrics as he has an xG contribution per 90 of 0.6 but a goal contribution per 90 of only 0.54, meaning he is getting into good scoring positions and/or providing good key passes but not all of of them are materialising into goals. Reinier appears with a better profile but with lower numbers when compared to the Nigerian.

Alphonso Davies –  Without a doubt the star of this analysis, the man from Bayern Munich stood out in most of the analysed metric with defensive output, ball progression, passing and chance creation being his standout attributes. After a great season with Bayern Munich, Davies has everything to grow and develop and certainly has the potential to be a world-class player.

Jude Bellingham – There are a lot of eyes looking on Bellingham after his move from Birmingham to Borussia Dortmund. The 17-year-old looks like a very balanced midfielder with great defensive abilities but also offensive involvement, creating chances for his teammates. His standout attributes during this analysis were defensive output, overall success and amount of actions, passing into dangerous areas and creating chances.

Reinier – The Real Madrid loanee looks like an impressive creative midfielder. Reinier has defiantly proved his value at Flamengo and now looks to do the same in Germany. Reinier’s standout attributes during the analysis were passing, chance creation, creativity, delivery into dangerous areas and goal contribution. Reinier is definitely a player to put into your “ones to watch list” this year in the Bundesliga.

Roberto Massimo – The 19-year-old winger that plays for Stuttgart, Massimo played some games last season in the German second division and was able to produce good numbers overall. His standout attributes during this analysis were passing, ball progression, delivery to dangerous areas, chance creation and creativity.

Noah Katterbachc – A youth product of FC Koln’s academy, the 19-year-old left-back looks like he could be a good prospect and get some game time for the first team as he already did last season. With some good performances, he managed to produce an interesting and good statistical output. His standout attributes during the analysis were defending, passing, progressive passing and passing into dangerous areas. With a very pass-focused profile, Katterbach looks like a player with a good fit for possession-based play and is certainly a very good attribute to have in a modern-day left-back.

Here is an image with the five players on the shortlist with percentiles calculated for key metric where they stood out. 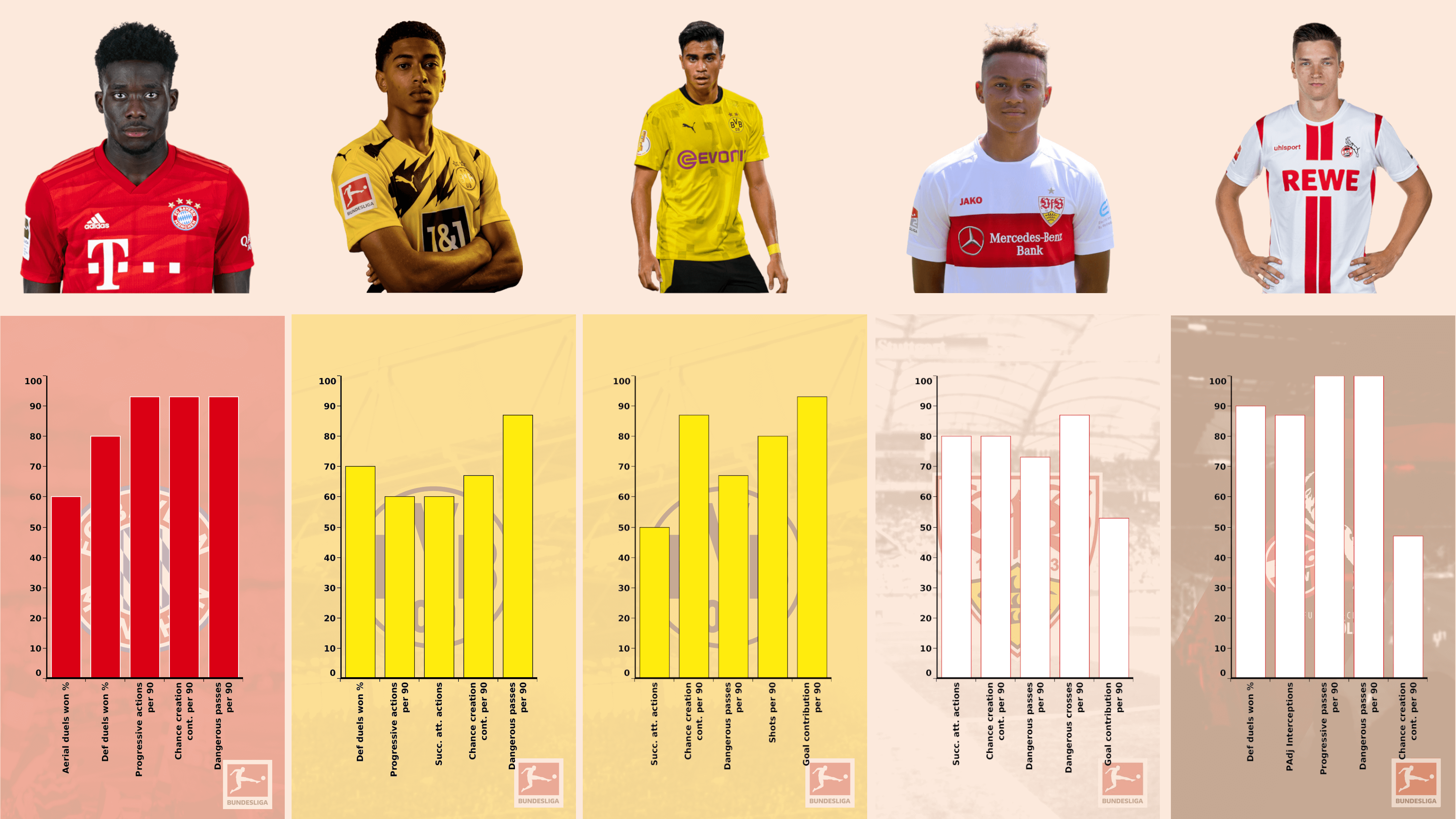 This data analysis took us through the statistical output of the teenagers in the Bundesliga that had suitable data for analysing. Different metrics were analysed to cover various aspects of the game, from defending to goal contribution and with passing and chance creation in the middle, the players’ data profile was thoroughly analysed.

In the end, a list of five exciting teenagers was compiled and these are players that you should look out for in the Bundesliga and the Champions League this season.