Established in 2006, the Texas Derby pits Houston Dynamo and FC Dallas in a struggle for MLS bragging rights in the state of Texas. In the current season, the Texas Derby will be played four times. With a win and tie each the last meeting will decide who takes home “El Capitan”.

The Dynamo are looking to claim a playoff spot in the ultra-competitive Western Conference. With former US under 20 coach Tab Ramos at the helm, Houston has been competitive this season. Picking up 16 points since the league restarted, they are within reach of a spot in the playoffs.

FC Dallas began the restart well, and are starting to stumble close to the finish line. Luchi Gonzalez’s team have drawn two and lost one in their previous three matches. While they continue to drop points, teams like San Jose and Houston are beginning to gain ground.

Although they were down a man for the entire second half, the Dynamo secured three points. FC Dallas is losing ground to their in-state rivals. This tactical analysis will give a detailed look at how Houston’s organisation frustrated the visitors and how they executed their game plan to come away with a win. 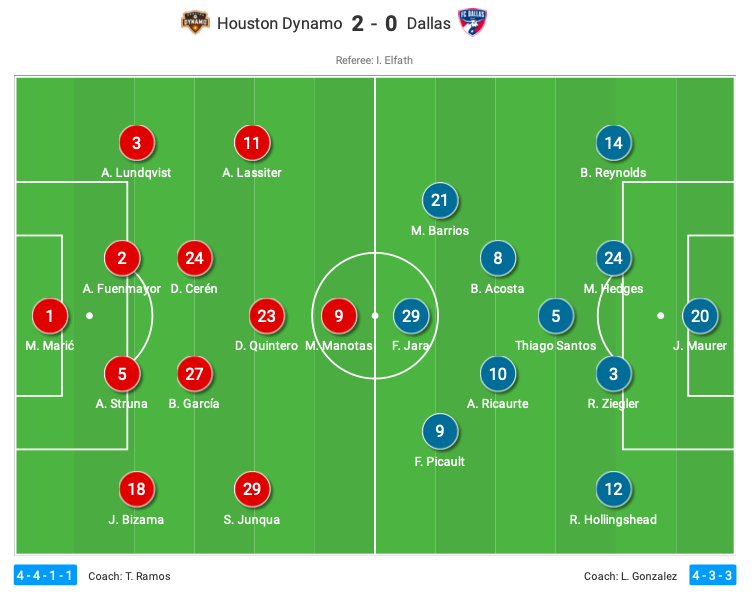 Tab Ramos lined the Dynamo up in a fluid 4-4-1-1. Alejandro Fuenmayor got the start at centre back due to Maynor Figueroa’s suspension due to absence. Houston’s main attacking threat came in the form of Darwin Quintero. After acquiring the Colombian’s services from Minnesota before the season began, Quintero has repaid Ramos and the Dynamo with five goals and three assists.

Luchi Gonzalez kept the faith in his starters from the games against Orlando and Columbus. Although they were able to score two goals in their previous game, neither came from leading goalscorer Franco Jara. Dallas would have to make a change in the first half at centre back due to an injury to Matt Hedges. The North Texas side would continue to rely on players such as Hollingshead and Barrios to inspire their attack.

With an intensity similar to Atletico Madrid, both teams came out to harry the opponent into mistakes. In the first half, Houston and Dallas allowed a relatively close amount of passes per defensive action. We can see below how this drastically changed in the second half since Houston played with 10 for the whole half. 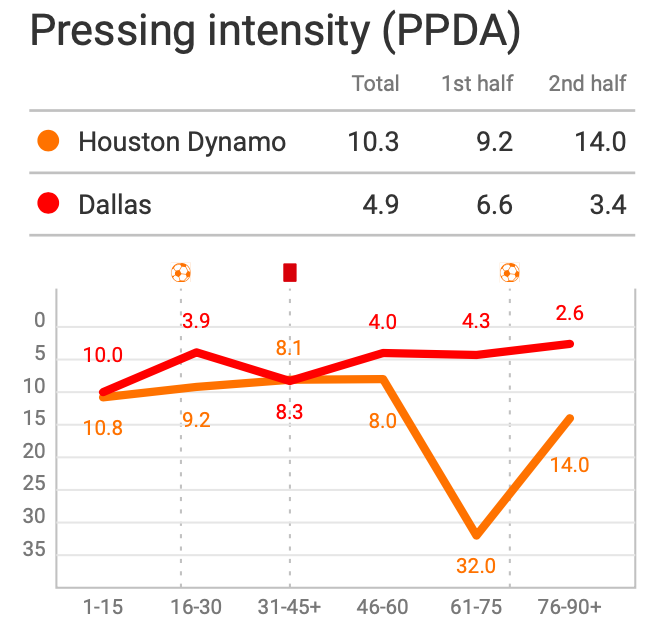 Although both teams went for a high press, each had a different area they wanted to win the ball in. Below we can see how Dallas was about even in their recoveries throughout the field. Houston however, would primarily win the ball in their attacking third or in their defensive third.

The Dynamo’s insistence of winning the ball in the final third did pay off early in the first half. Similar to Manchester City, Dallas wanted to build up possession with short passes from a goal kick. Houston countered this by having their midfielders and forward press Dallas. 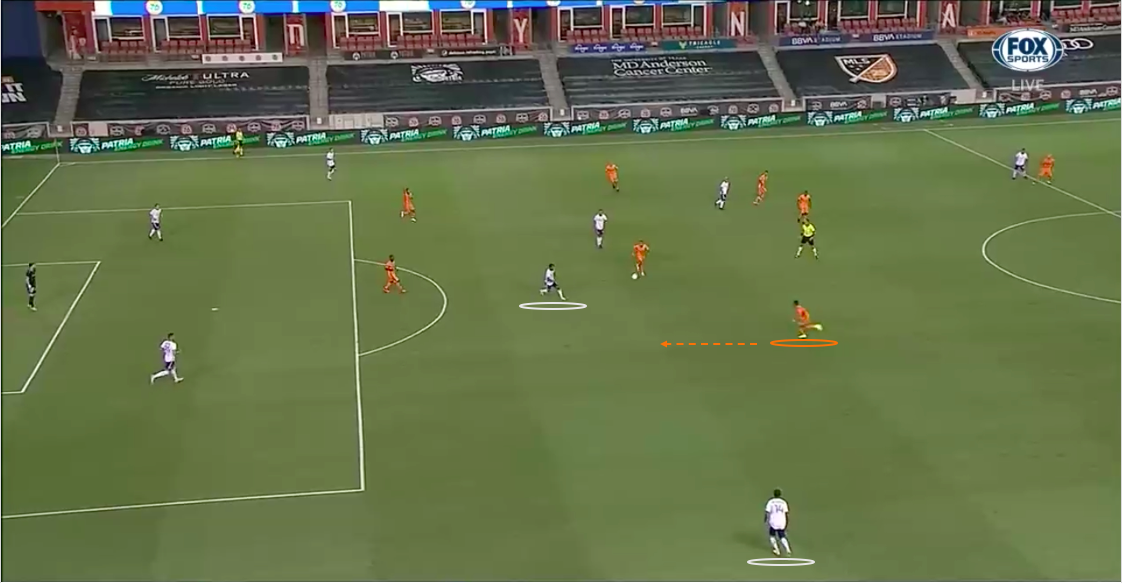 We can notice in the image above the Dynamo’s numerical superiority in the centre of the field, which lures the visitors to attempt to play wide. We begin the sequence with left-winger Lassiter sprinting to cut off the potential pass to Dallas right back Reynolds. 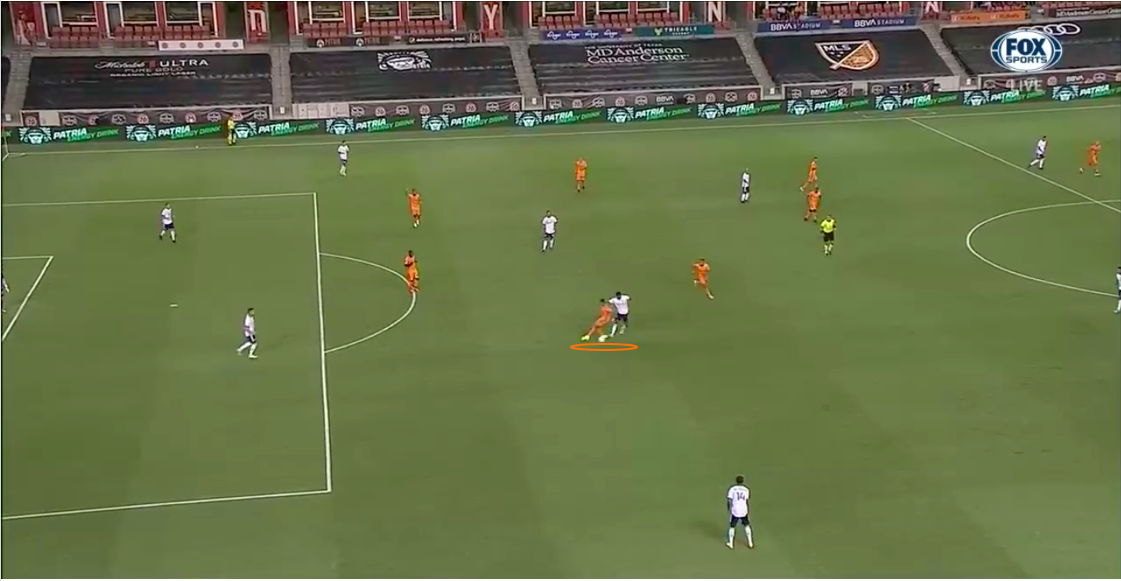 As he closes down the Dallas midfielder, the ball takes a deflection and bounces right in front of Lassiter. Since the visitors kept their centre backs near the keeper to draw Houston’s press closer to the box, they were too far to step to the winger. 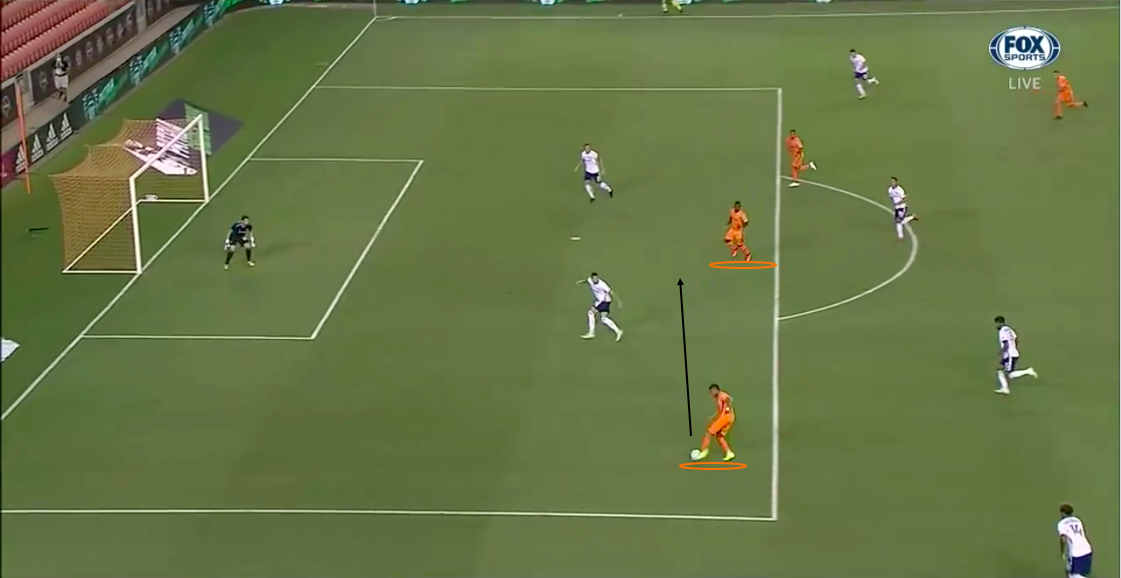 This gives the Dynamo a three v two in their favour inside of the penalty area. Due to the spacing of the Dallas defenders, Quintero and Manotas were able to find plenty of space between the lines. Lassiter is able to quickly pass to Quintero, who found himself in a pocket of space. 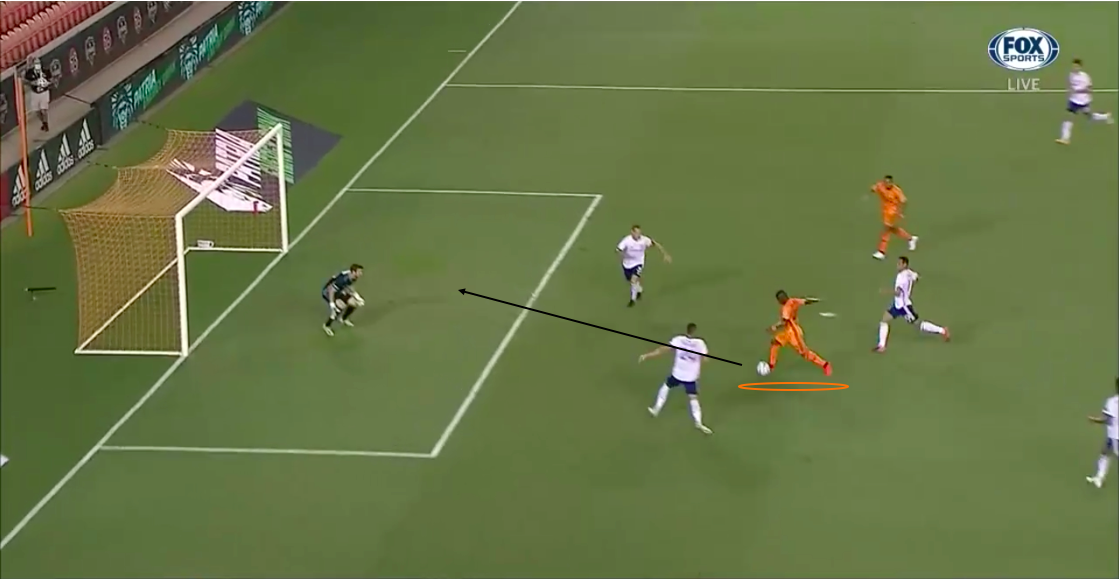 Houston’s attacking midfielder is then able to take a touch and steer his shot past Dallas goalkeeper Maurer.

After striker Mauro Manotas was sent off at the end of the first half, Houston was faced with the prospect of defending a man down for 45 minutes. Tab Ramos did not have to make any adjustments to personnel since his target man was the guilty party. As seen in the analysis of the pressing intensity, Houston maintained a decent press up until the hour mark. 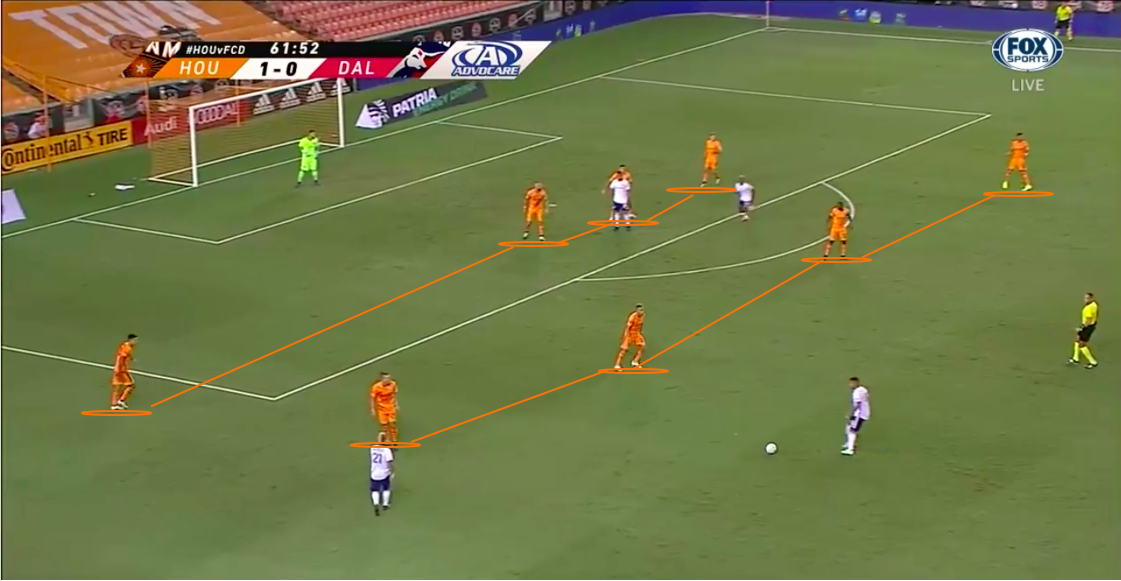 For the entirety of the second half, Houston defended in a very compact 4-4-1. As we can see above, they utilized two lines of four. They doggedly defended the centre and allowed Dallas to play out wide. 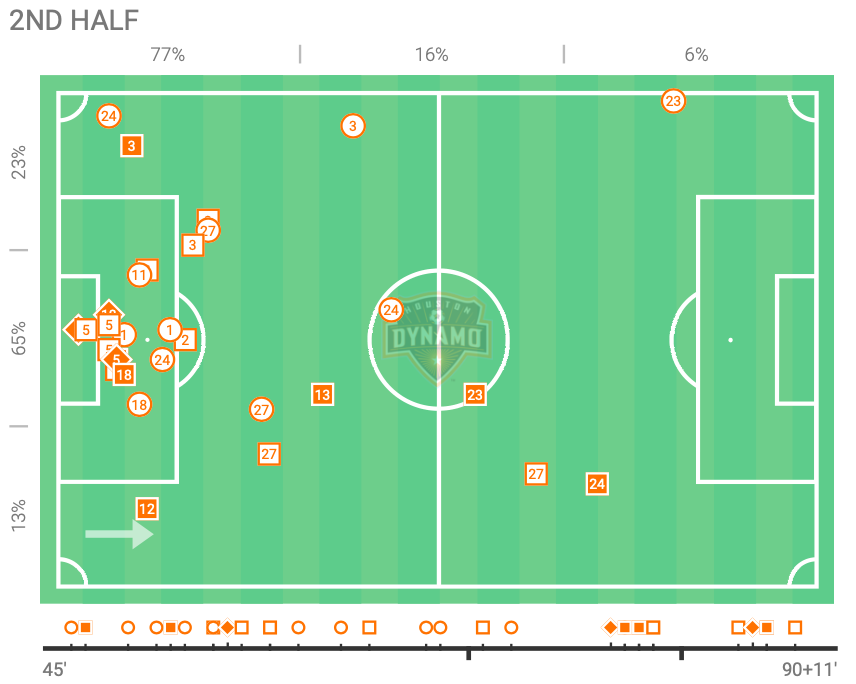 Their defensive focus can be seen in using an analysis of their second-half recoveries. With only eight recoveries made outside of their penalty area, Houston was happy to defend crosses with numerical superiority in the box.

In the next section of the analysis, we will see how FC Dallas attempted to break through Houston’s low block.

The North Texas side enjoyed the lion’s share of possession in the second half, dominating the ball 74% of the time. The visitors clearly wanted to draw Houston’s defenders wide before crossing the ball in. This preference is shown in the analysis below, with 22 attacks coming from the right and 23 from the left. 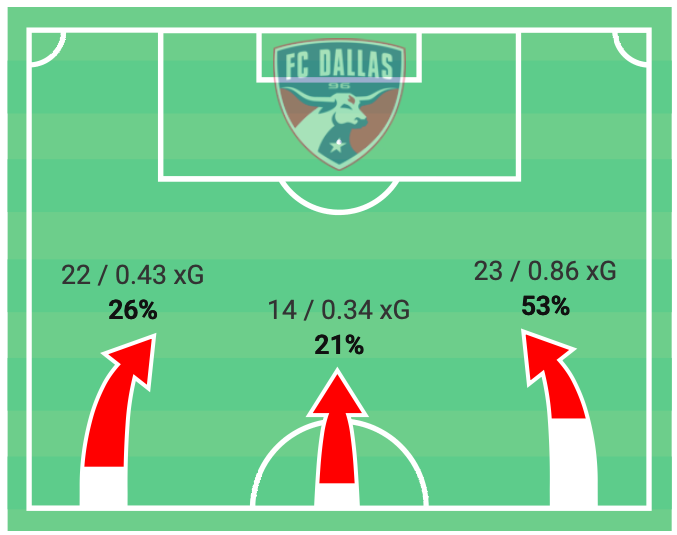 Their attacking tactic was to utilise outside backs Hollingshead and Reynold’s combining with wingers Barrios and Picault in the channels or in the halfspaces. Using an example from the second half, we are able to see Hollingshead and Barrios combining on the left side. 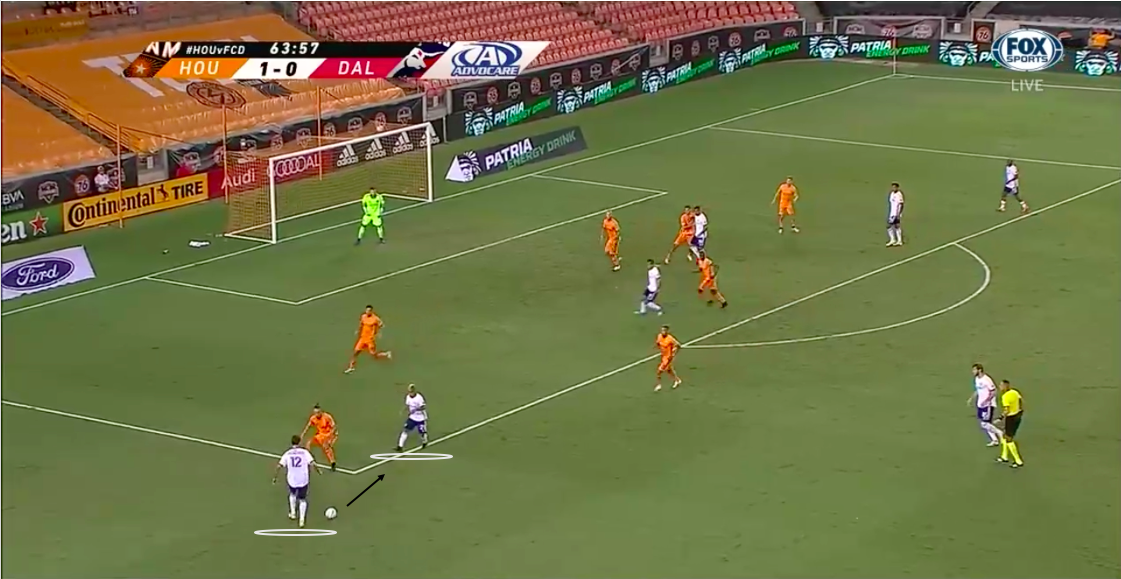 After receiving the ball, Hollingshead and Barrios isolate the Houston right-winger in a two v one. Once Hollingshead passes to Barrios, the Colombian turns to face the penalty area. 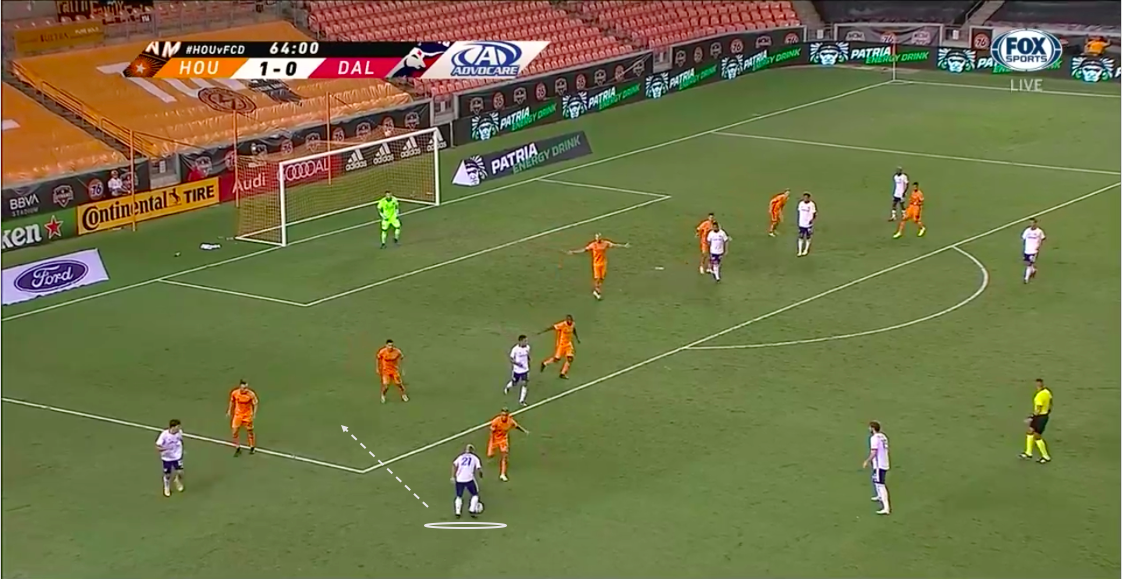 Since the Houston defenders have shifted over to cover their right flank, Barrios decides to beat his marker and dribble towards the gap between the right midfielder and right back. 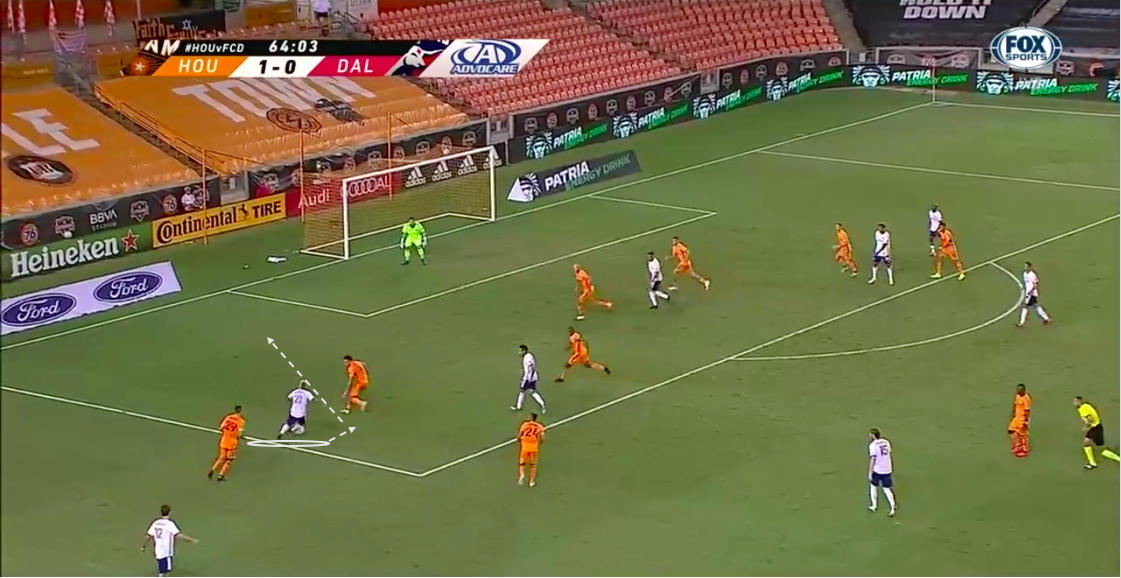 Using his clever footwork to beat the next defender, Barrios cuts inside before quickly taking the ball towards the goal line. Although he is able to get past two defenders, his cross is blocked by one of Houston’s centre backs. 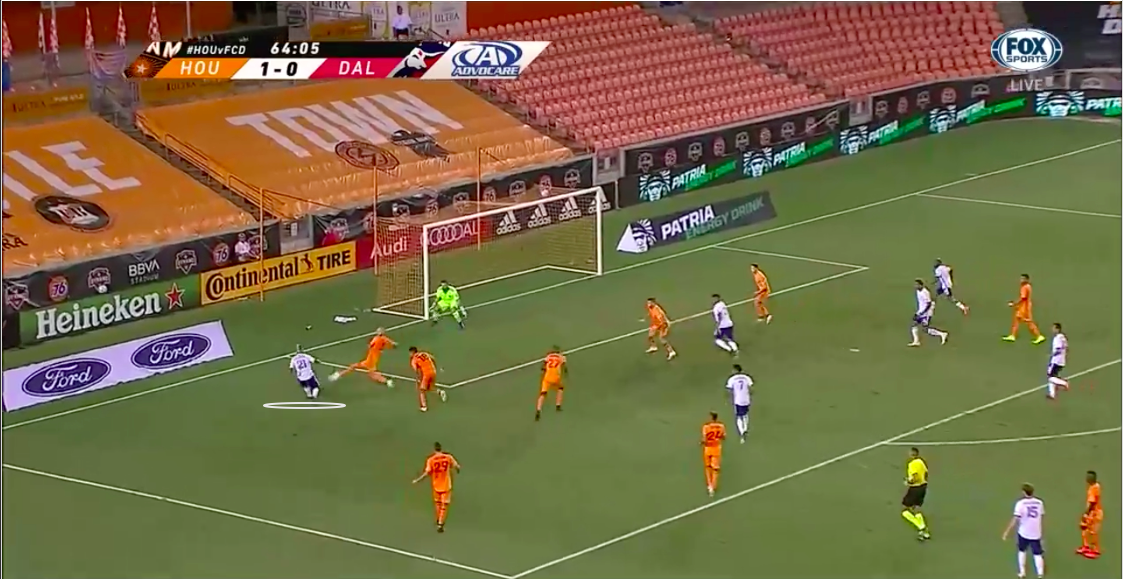 Dallas had 26 crosses in the second half, and they were only able to connect on 11 occasions. Due to Houston’s numerical superiority in the box, the passes that did connect turned into blocked shots.

How Dallas could have unlocked Houston

Dallas was able to move the ball around the outside of Houston’s defence with ease, but they rarely tested the home side through the middle. However, on the one occasion that they did, it was too late in the game for it to have any effect. 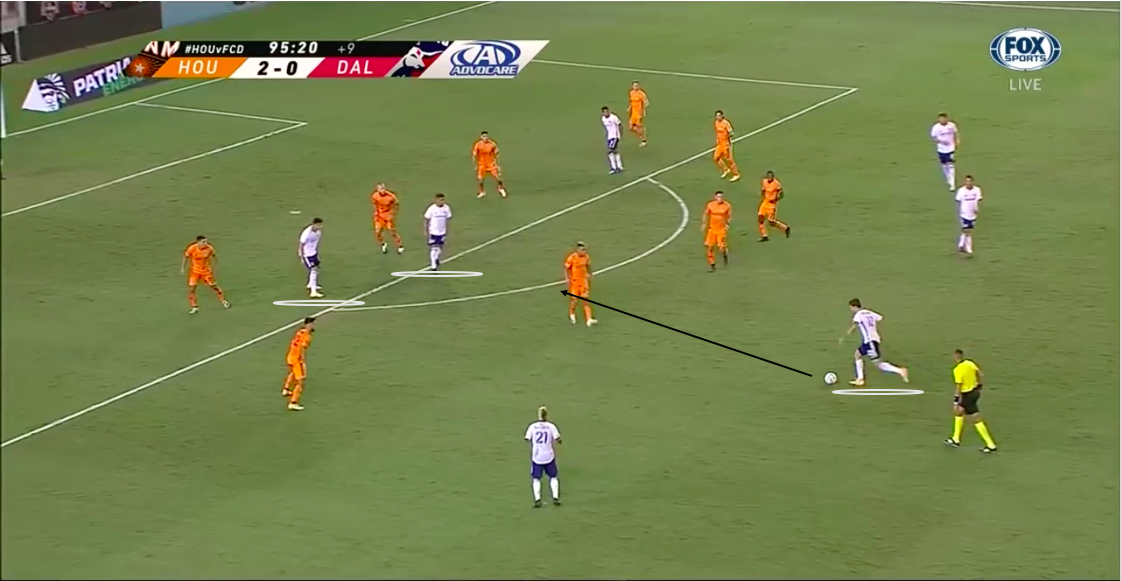 We begin the sequence as the Dynamo defenders adjust to the centre after Hollingshead received the ball. Jara is in front of the defender marking him, while Pepi is positioned between the centre back and right back. 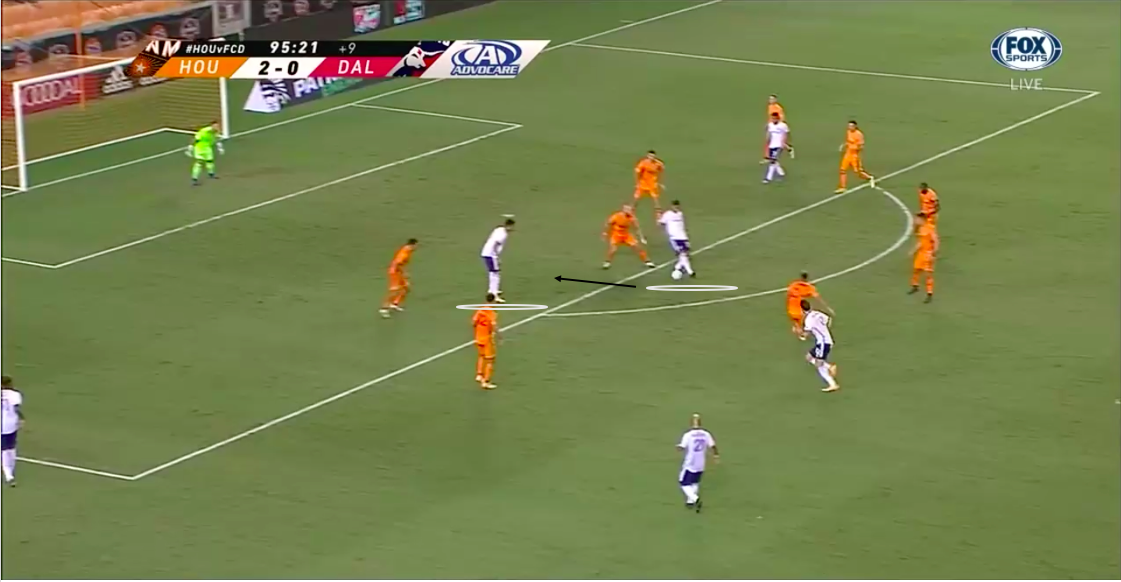 Hollingshead splits the first line of defenders to find Jara. The Dallas striker is able to flick the ball into the gap towards Pepi. 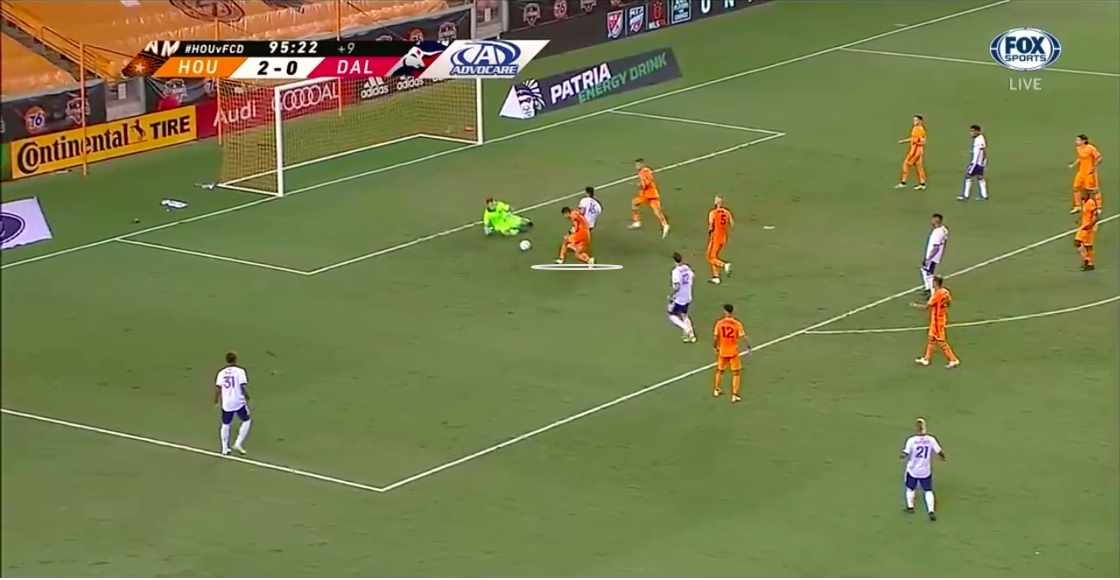 The young forward is caught flat-footed and is easily shielded from the ball by the defender. This type of action is something else Dallas should have attempted as they shifted the ball from side to side.

In the next section, we will see the tactic Houston used to break out of their half from time to time.

While Houston defended with eight field players, their ninth player stayed higher as an outlet. For the majority of the second half, this player was none other than Darwin Quintero. Due to Dallas’ attacking emphasis in the channels, Houston would counter directly through the middle. We can see below that the Dynamo attacked the visitors ten times through the centre. They also had an xG of 1.87 to go along with it. 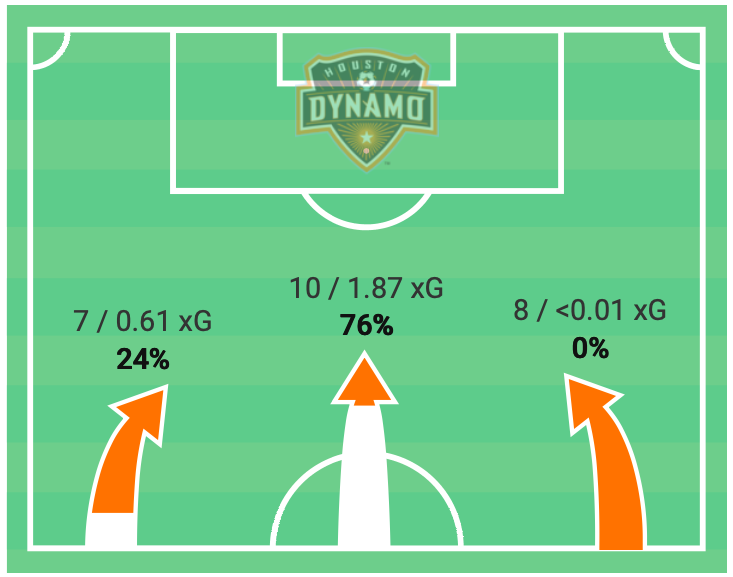 This counter-attacking tactic paid off late in the second half. After the ball is cleared, Houston midfielder Cerén begins the Dynamo counter as he receives the ball in space. Cerén immediately picks out a sprinting Ramírez, while Hansen runs to the opposite side of the last Dallas defender. 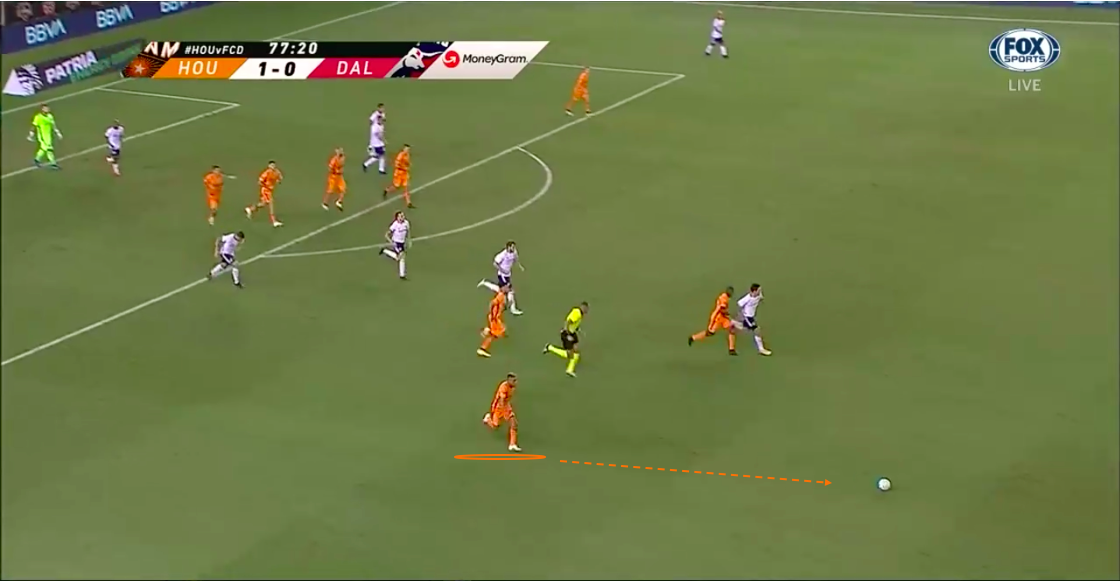 The three v two turns into a two v two once the pass is collected by Ramírez. Due to the bouncing ball, both Dallas defenders attempt to dispossess him. 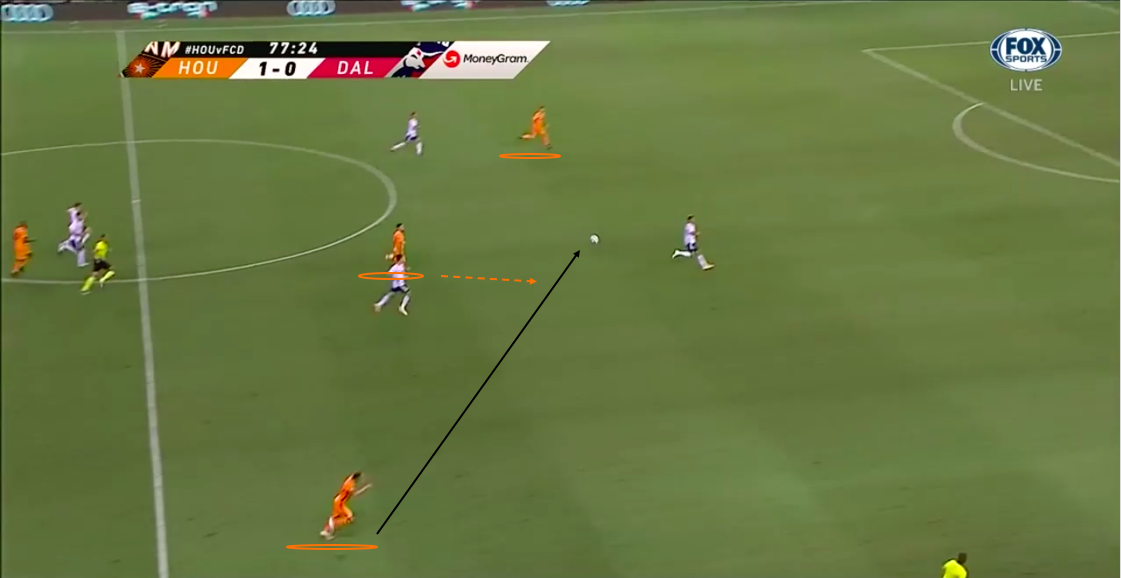 He is able to quickly play a lofted pass under pressure to Hansen, who is now one v one with the goalkeeper. Dallas right back Reynolds tackles Hansen as he tries to get to the ball, and the resulting VAR decision rewards Houston with a penalty. 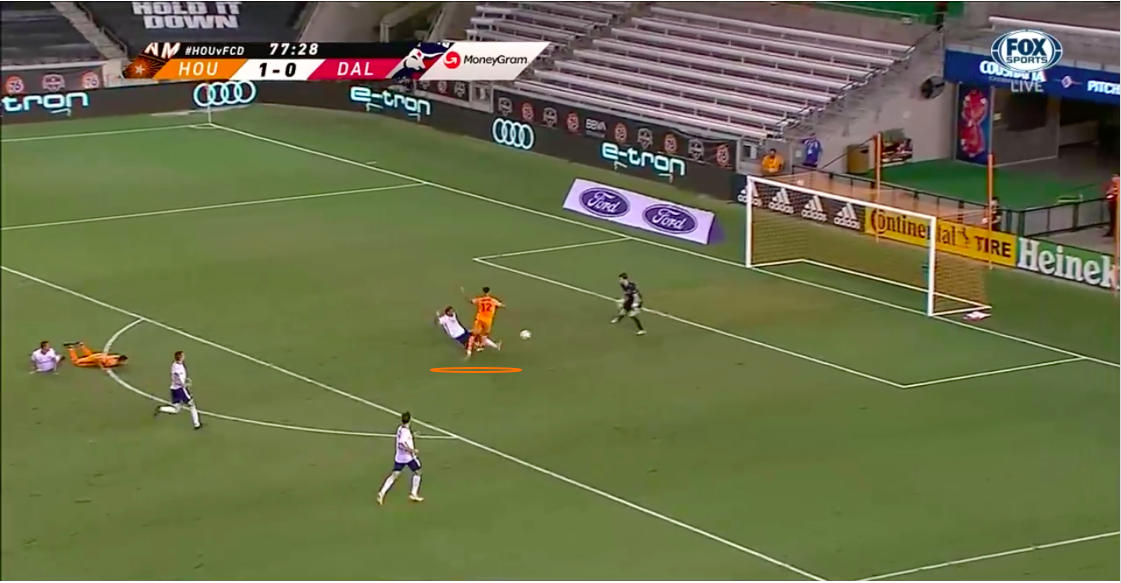 Although they were aided by the video assistant referee in that sequence, Houston’s tactical decision to dribble down Dallas’ exposed middle instead of playing long balls ultimately secured them the three points.

FC Dallas has been able to play against three different teams that have had a man sent off. Each time they have not been able to capitalise by unlocking the low defensive block. This has been massively detrimental to the North Texas side in their pursuit of a playoff spot.

Houston has been able to secure points when they need it the most. Tab Ramos has been able to get the Dynamo to compete in his first year in Southeast Texas. There still are matches to play, but it’s safe to say that Houston could find themselves in the postseason when it’s all said and done.

It is no secret that Serie A has played host to some incredible games this season, and this tie between […]

Advantage City: but here’s why Dortmund should remain optimistic for round two

On Tuesday evening, we viewed an eventful victory for Pep Guardiola’s Man City over Borussia Dortmund in the UEFA Champions […]

The FA Cup semi-finals began with a clash between Chelsea and Manchester City at Wembley Stadium on Saturday. Both sides […]