Sunday evening brought a full slate of games from the MLS. Among these games was a very interesting matchup between two teams that were in the playoff hunt in their respective conferences.

Having won three of their previous four matches, FC Dallas firmly placed themselves back in the playoff picture in the Western Conference. The North Texas club has enjoyed a solid league restart only losing twice. Luchi Gonzalez and his team would be looking to gain ground on West leaders Seattle while creating a gap in points from the rest of the playoff hopefuls.

After finishing runners up in the MLS is Back tournament, Orlando City has maintained their consistency since league play restarted. Only losing once in the previous 12 games, Oscar Pareja’s side is firmly in the race to claim the Eastern Conference.

Both sides ended up cancelling each other out, ending the match in a scoreless draw. This tactical analysis will take a look at how Orlando adjusted to playing a man down, and how Dallas couldn’t take advantage of the numerical advantage. 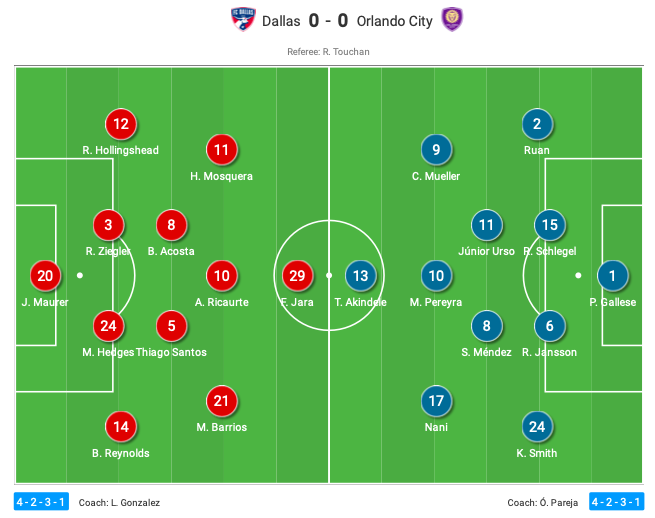 Luchi Gonzalez sent out his side in a 4-2-3-1 with particular emphasis on the wide areas. Players such as Michael Barrios and Santiago Mosquera would look to provide service for top scorer Francisco Jara. Rookie right back and academy product Bryan Reynolds has found playing time after Reggie Cannon’s departure to Boavista.

The visitors were also lined up in as well 4-2-3-1 on paper. Captained by Nani, their talisman with experience in Serie A, La Liga, and the English Premier League. Orlando’s leading goal scorer and assist provider, however, is not the talismanic striker, but a young American rookie named Chris Mueller. The youngster has four goals and four assists and has been providing his team with another attacking option.

Oscar Pareja’s side came to Texas to squeeze the life out of the opposition with an intense press. Analyzing both teams pressing intensity, we can see that Orlando was consistent with the pressure they put on Dallas. With a game average of eight passes per defensive action, Orlando only dropped the press when they went a man down. 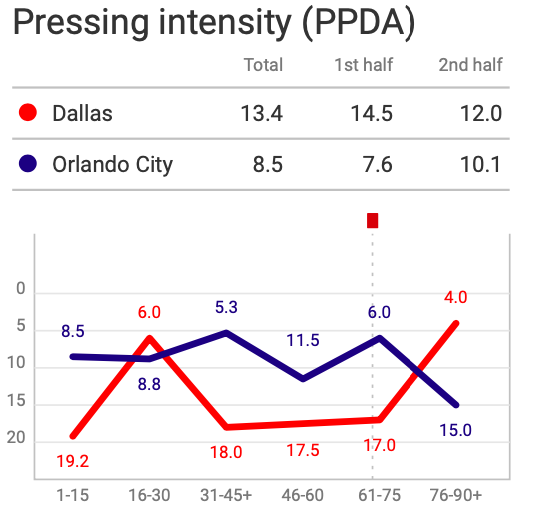 The aim with their heavy press was to force Dallas into inaccurate long passes, which could be won at half field. Using the following example from the first half, we see Orlando’s high press against Dallas in action. 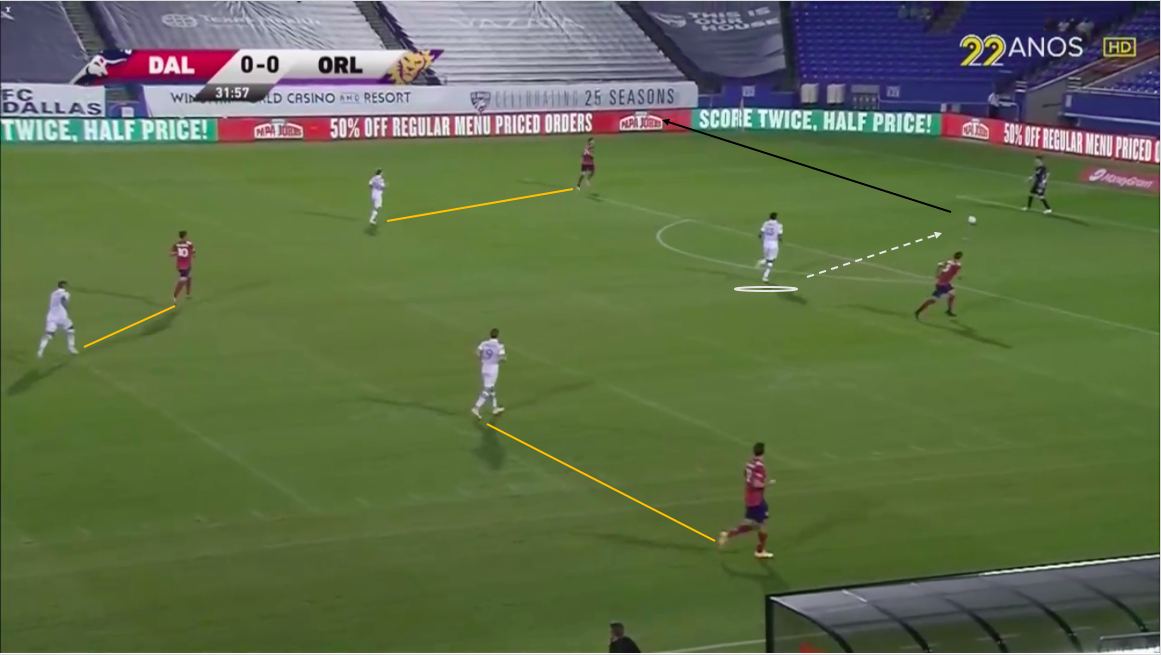 We see that Akindele has forced the centre back to pass back to the Dallas goalkeeper Maurer. The rest of Orlando’s players have all of Maurer’s short options covered. After a brief pause, the goalkeeper decides to play long to Reynolds on the right side. 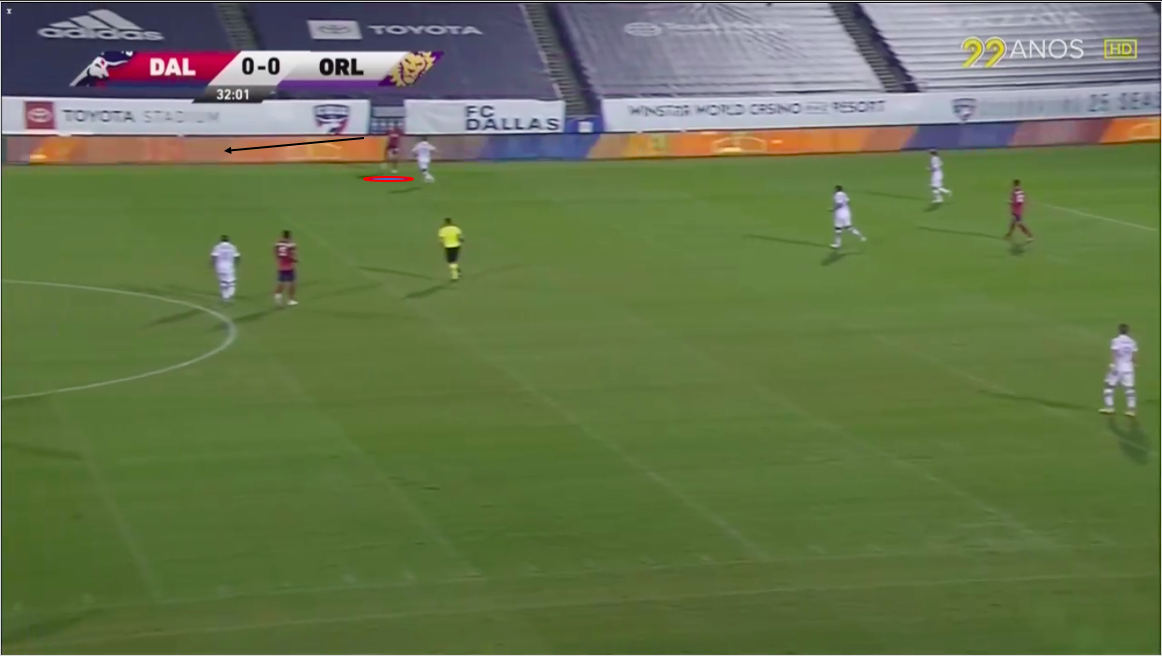 The Dallas right-back is immediately under pressure, and his first touch goes towards Orlando’s left-back. Miller is able to play Nani with a first-time pass. 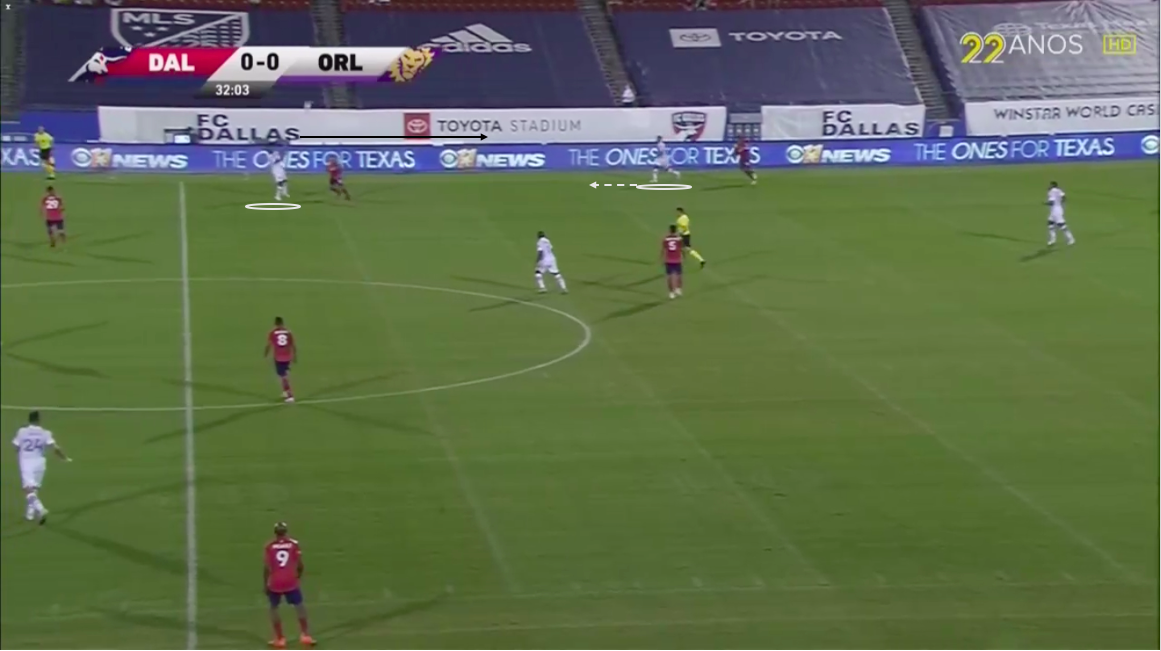 Nani is able to flick the ball towards Junior Urso, and Orlando is attacking Dallas once again in the final third. We can see that there are five FC Dallas players already committed to attacking. Once the ball is lost, the home side is stretched vertically, which makes it easier for Orlando to pick them apart in transition. 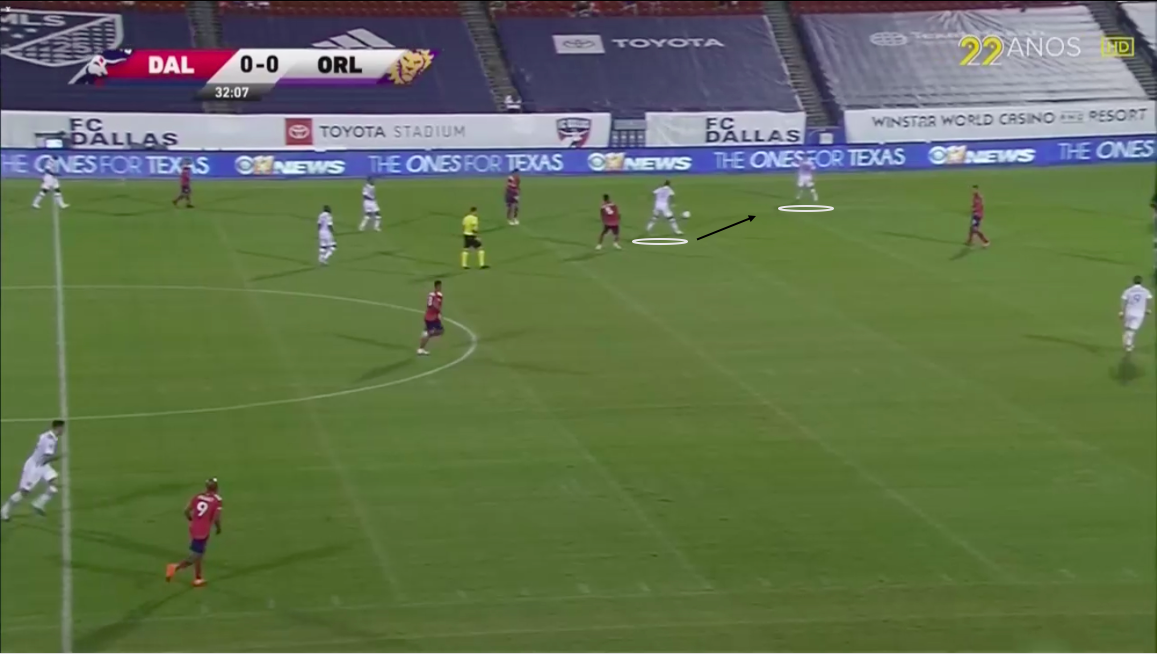 This defensive tactic not only forces the opposition into making mistakes, but it also keeps the team ready for the counter-attack. Once the ball was won at midfield, Dallas was caught committing numbers forward, and Orlando was prepared to transition. By maintaining the pressure on Dallas, Pareja’s side was able to retain the ball for their attacks in favourable spaces.

When Dallas was able to build up, they usually attacked down the right side with Berrios. We can see in the analysis of their attacks below, that 61% of their attacks were funnelled through their right-winger. 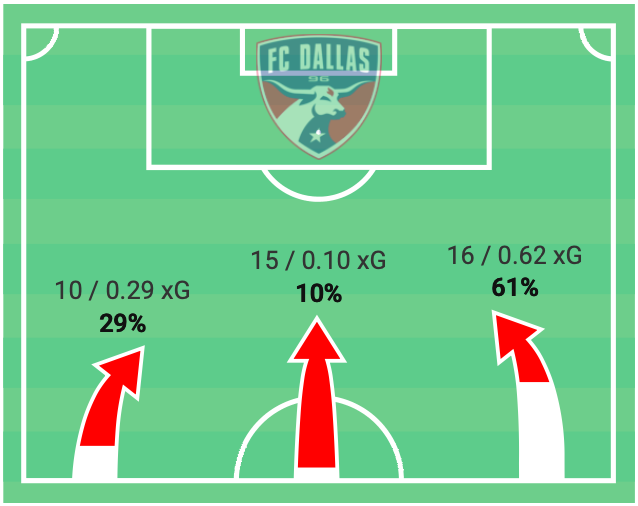 Using their most frequent passing combinations, we see that Dallas’ 4-2-3-1 shape was asymmetrical with an emphasis on the right side. We can also notice that Berrios received slightly higher than Jara. Joining Berrios in a more advanced position was right back Reynolds. 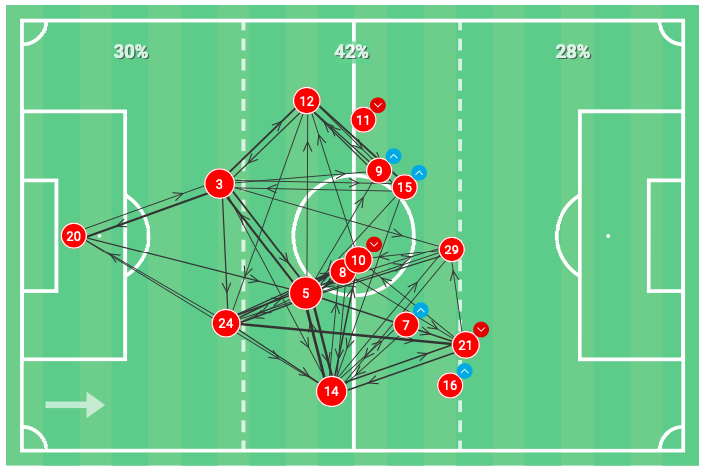 Using the following sequence from the first half, we can see an example of how Dallas would quickly break out on the right-hand side against Orlando. After receiving a pass beyond Orlando’s first line of pressure, Acosta quickly picks out Berrios who is higher up the field. 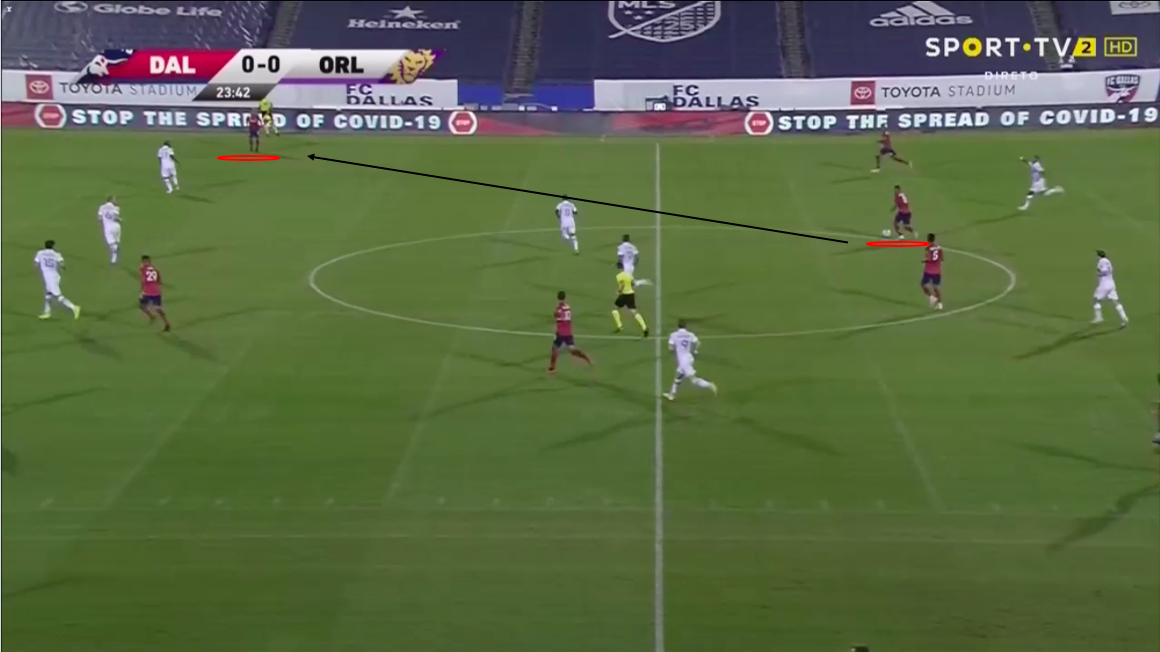 As Berrios is receiving the ball, Reynolds makes an underlapping run in the half-space. The winger notices the run and since Orlando’s defender is closing him down, plays Reynolds into space. 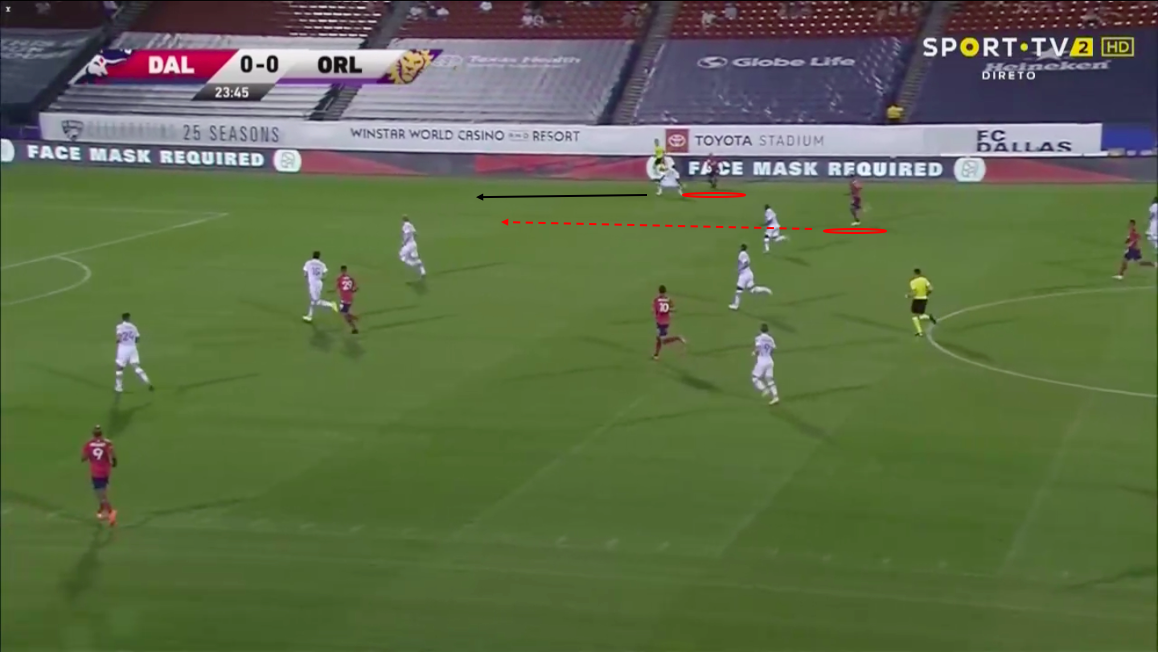 Reynolds is able to play a cross into Jara, but it is cleared away by the Orlando defenders. Dallas attempted to break the visitors down by repeatedly isolating the left-back in a 2 v 1. Orlando however, was able to deal with the crosses into their penalty area. 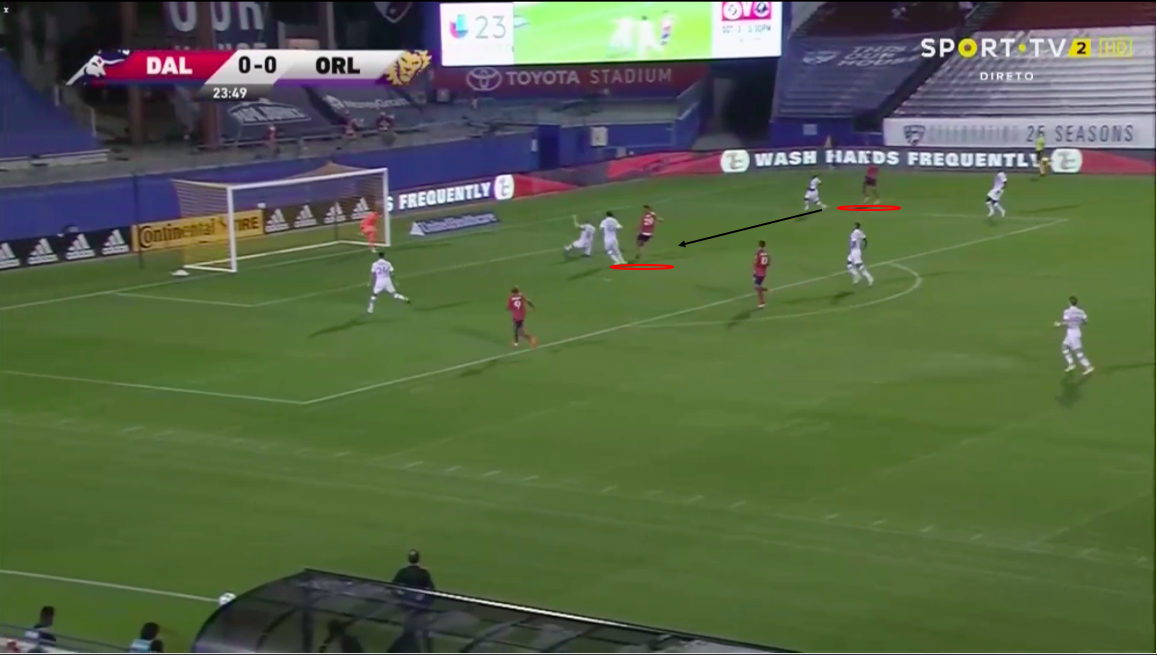 A night of rare chances

While both teams were locked in a back and forth game, each had their opportunities on goal. Orlando recorded 15 shots, and Dallas took 13 shots. Both Orlando and Dallas had less than five shots on goal. 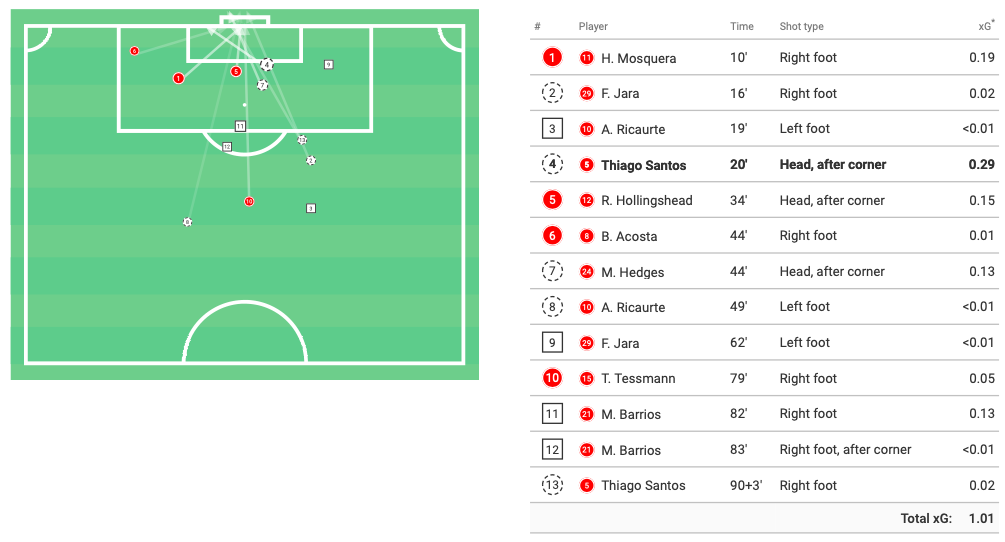 Above we see the quality of chances and shot map for the home side. While they did have three of their shots in target inside the penalty area, only one came after the red card for Orlando. While Dallas was a man up, they clearly could not break through Orlando’s defence. 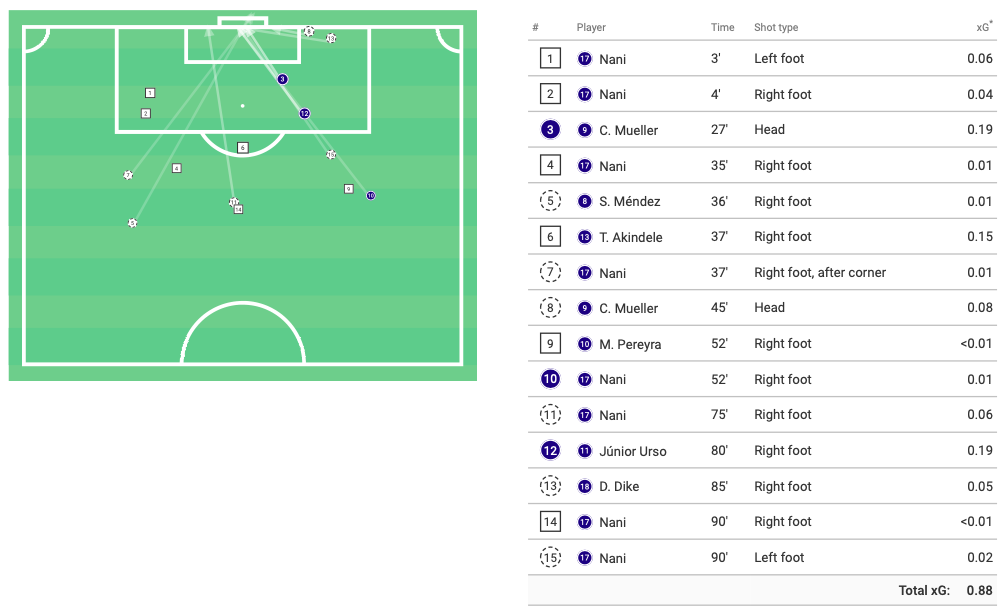 Orlando’s chances were even poorer than Dallas. Of their three shots on target, only two were decent opportunities on goal. Taking the majority of their shots from outside the box did not help their xG.

Each team did well to prevent the others’ chances by blocking shots. Orlando was able to block four of Dallas’ shots which counts for 31% of the home sides’ chances. Dallas stopped six of Orlando’s chances, one of which came in the 90th minute when Orlando was a man down.

The Lion’s defensive adjustment after the red card

After receiving two yellow cards in the span of five minutes, Orlando’s midfielder Mendez was sent off. Pareja then adjusted his team to play in a 4-4-1. As we saw in the pressing intensity graph, they began to slowly taper off their heavy press. By the time the match was over, Orlando had allowed 15 passes per defensive action. 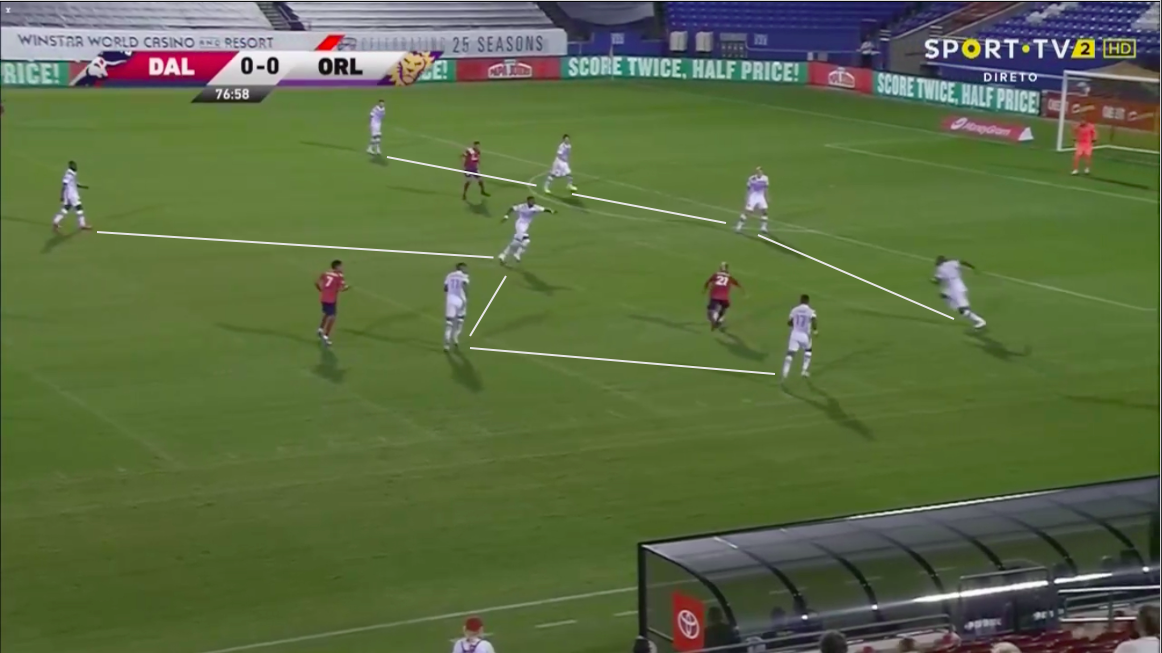 Above we see how they defended the defensive third with two lines of four, leaving one forward as a potential outlet for a rare counter-attack.

Dallas and Orlando didn’t do any damage to their playoff aspirations with this scoreless draw. However, the lack of quality chances may be something that both Luchi Gonzalez and Oscar Pareja take into account.

To be able to make the playoffs in the highly competitive Western Conference, Dallas needs Jara to find his shooting boots. They also need their defence to continue to keep clean sheets.

Orlando City will continue to rely on Nani for inspiration in the attack, utilising Chris Mueller’s rich run of form to aid their attack. Losing Ruan early on to injury could be a setback, but if Pareja’s side can continue to fire on all cylinders, it could very well be a blip on their way to the playoffs.