The Major League Soccer is Back Tournament came to a conclusion this past Tuesday as the Portland Timbers played Orlando City for a chance to win silverware. Along with a trophy to marvel over, a hefty cash prize and a spot in the Concacaf Champions League in 2021 was up for grabs. Both squads were looking to win the final match of the tournament that has been a huge success for the MLS, as they implemented proper procedures to combat the coronavirus. The MLS success has served as a champion for tournament style play resuming as the UEFA Champions league looks to recreate the bubble-like atmosphere.

Both clubs had an exciting path to the final. Orlando City beat LAFC on penalties while the Portland Timbers had a notable win against a well-drilled Philadelphia Union side. With each team having a strong lineup with key performers throughout the tournament, this match was set up to be a good showing for the MLS.

This tactical analysis and match report will analyse the tactics for both sides during the Portland Timbers’ 2-1 victory over Orlando City. 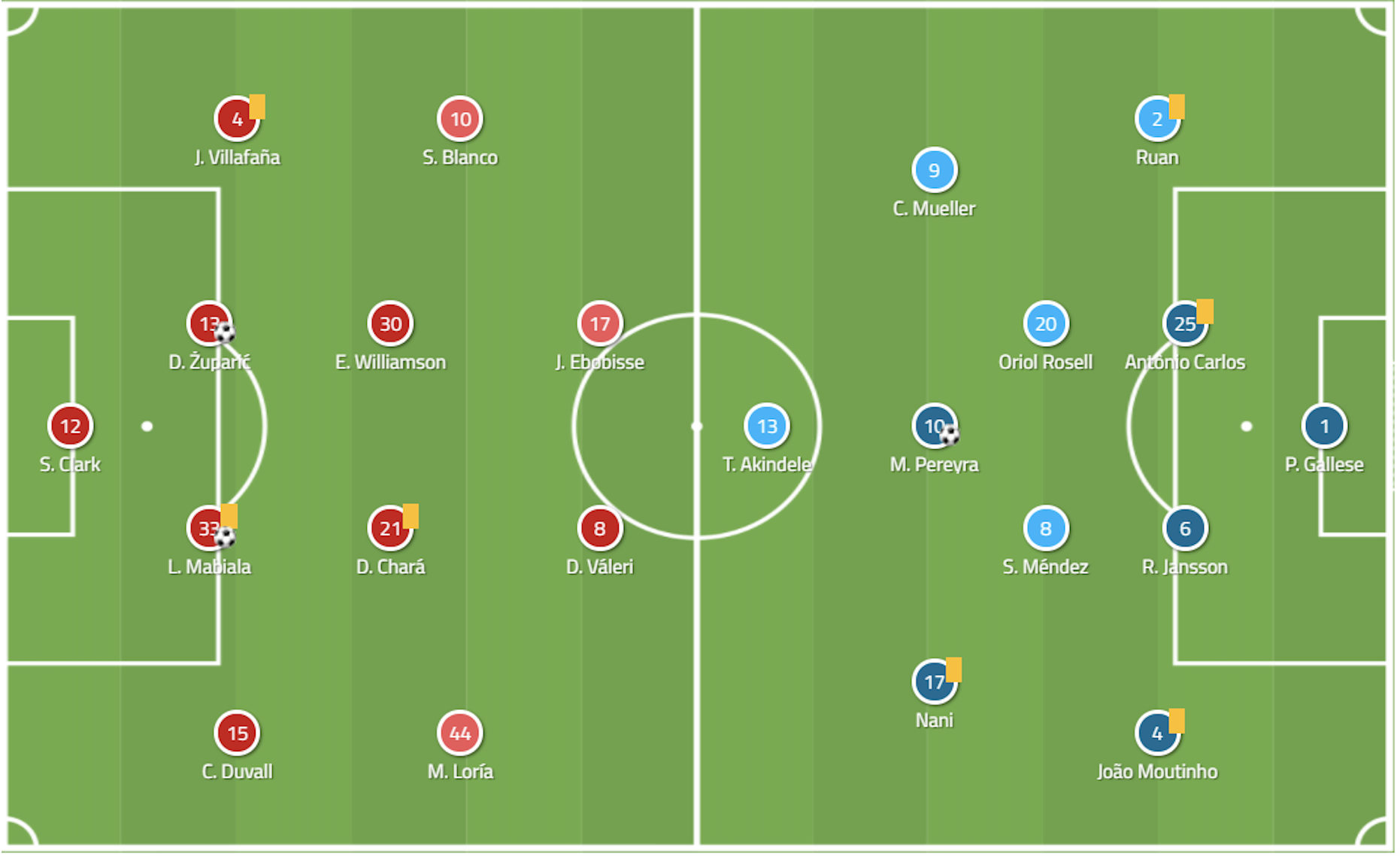 The Portland Timbers’ set out in a 4-4-2 formation on the team sheet, which actually represented more of a 4-2-3-1 in the match while implementing attacking tactics. Diego Valeri was the main creator who would support Jeremy Ebobisse at the main striker making darting runs behind the Orlando backline. On the wings, Sebastian Blanco featured as a dangerous attacking option after his accolades in the semi-final. Behind them are the two defensive midfielders and four defenders that have been putting in fantastic performances in the later rounds of the tournament.

For Orlando City, manager Oscar Pareja started in a 4-2-3-1, with the main emphasis on the former Manchester United superstar, Luis Nani. The Portuguese winger scored twice and registered one assist in an emphatic 3-1 victory in their semi-final fixture. Supporting him was the main creator and number 10, Mauricio Pereyra, who has been a constant threat for City throughout the tournament. Finally, Orlando set up with two pivot defensive midfielders protecting the backline, similarly to the way the Timbers started the match.

One of the main reasons Orlando City lost the MLS is Back final was because of their lack of effectiveness while in possession. There is a lot to analyse about this claim due to the statistics, which strongly favour the Timbers despite their lack of possession. By the end of the match, Orlando out possessed Portland with 60% possession compared to 40%. City had 27:38 minutes of pure possession, meaning when they were playing with the ball live on the pitch, while the Timbers had only 18:35 minutes of pure possession time. Now, despite these significant differences, the Portland Timbers registered 13 shots on goal compared to Orlando’s 11 and had an xG of 1.58 compared to City’s 0.53.

These statistics tell two possible stories. Either Orlando City’s attack was ineffective or Portland’s defensive efforts were exceptional. The fact is that both of these possibilities are true. Portland did set up extremely well defensively with the two lines of four defenders that they deployed behind the ball, as seen in the analysis below. This was a structure that worked well for them in the semi-final and worked again in the final. They were comfortable with Orlando having the ball because they knew their shape would protect the middle of the pitch well. 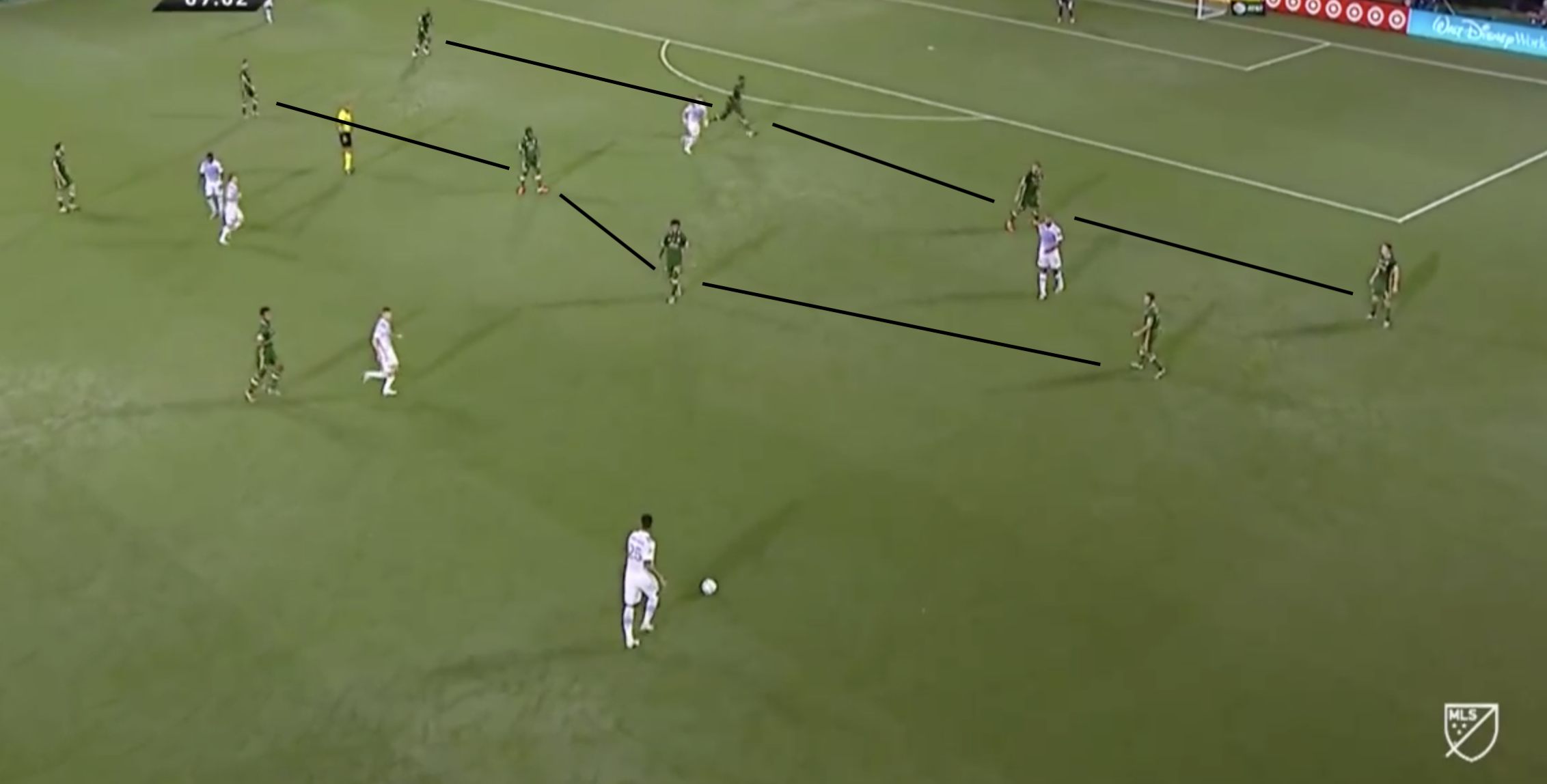 Portland did a fantastic job with their shape, but this section of the analysis will be more focused on the lack of effectiveness from Orlando City while in possession. City had far more time on the ball and more possession stats, yet there was no penetration. This stems from their attacking tactics. What Orlando set out to do was get the ball to their dangerman, Nani. As mentioned earlier in the match analysis, Nani scored twice in a man-of-the-match performance in Orlando’s semi-final. With everything working so well in the previous match, it was natural for Orlando to want to focus on their star player.

City would build the ball out of the back and would play the ball out wide to Nani, who would usually take on his player then later cut in on his right foot to try and find options in the middle of the pitch or in the box for a cross. As seen in the analysis below, because of a lack of options and Portland’s good shape (again note the two lines of four), Nani settled for a switch in play. This sequence happened frequently and shows moments of Orlando’s attacks that were ineffective.

City could not figure out how to break down the Timbers defence until Nani decided to take on players down the end line to cross the ball. This decision isolated Nani and the defender, which created a favourable duel for the winger. On this occasion, Nani was able to play the ball in for a cross which found Pereyra who scored Orlando’s only goal of the match.

These two instances show how Orlando’s attack and particularly Nani tried to create chances during the match. Unfortunately, City spent a lot of time in possession implementing the first instance instead of taking on players and driving into the box. This was significant because Orlando struggled to make the most of the ball.

While Portland had less possession, they made the most out of every opportunity while in possession. Their tactics were designed to absorb pressure then hit on the counter and they produced more quality and quantity in terms of shots on goal. However, where the true difference-maker in the match occurred was during set-pieces. As we saw in the semi-final match against the Union, Portland is extremely capable of set-pieces. Both of their goals came from set-pieces, and the final of the MLS is Back tournament was no different.

Valeri was the creator once again for the Timbers as he whipped in many dangerous crosses throughout the night. In particular, his set-pieces were accurate and decisive. Goals resulted because of trust between the set-piece taker, Valeri, and the players attacking the ball.

For the first goal scored by the Timbers, Valeri is taking a free-kick from a very deep position. There were four Portland attackers while eight Orlando players were defending the set-piece. From this instance, there are already causes for concern with Orlando’s defending. There is a man left open at the back post who is allowed to freely run into the box without pressure. It is clear that the players were instructed to mark the so-called “dangerous space” instead of the players attacking the ball.

After Valeri’s cross, the ball is met by Larrys Mabiala who does an incredible job of getting around his defender and into a goal-scoring position. While he had no right to score, he trusted the ball from Valeri and his commitment paid dividends. This sequence also highlights Orlando’s difficulty defending what should have been a routine defensive action. Even the two Portland players circled below are unmarked if Mabiala decided to square the ball across goal.

The second goal highlights Portland’s commitment while taking set-pieces. As the corner kick is being crossed by Valeri, Orlando’s set-piece tactics are clear to see. Again, Orlando City is more concerned with the dangerous space around the six-yard box rather than marking Yimmi Chara who is able to comfortably bring the ball down inside the box off a corner kick delivery. After playing the ball in for another phase of the set-piece, the ball pings around the box until it finds the back of the net. The City players were stagnant as Portland took advantage and were attentive.

These key differences in the approach of set-pieces were ultimately the deciding factor in this match. This shows just how important every phase and action of the match is during football.

The MLS is Back final was a highly entertaining match that showed how important tactics are during each phase and action of the game. Depending on how you look at it, one could argue that this match was decided based on Orlando’s mistakes or Portland’s successes. The answer is both, but this tactical analysis and scout report could help you decide how you viewed the match.

What went wrong for Orlando City was their lack of consistent penetration into the box and their poor defensive set-piece tactics. What went right for Portland was their defensive structure and their commitment to their tactics. The beauty of these statements is they are connected to each other and had a major impact on the match.

It was a truly entertaining fixture which marks the end of a fantastic tournament for the Portland Timbers.