The MLS is Back Tournament entered the semi-final round this week as two matches were set to decide who would get to the final. Teams are competing in a tournament for a spot in the Concacaf Champions League in 2021. The first semi-final taking place was the Philadelphia Union vs Portland Timbers while Orlando City played Minnesota United the next day.

This tactical analysis will focus on the first match between the Philadelphia Union and the Portland Timbers. Both clubs had an interesting route to the semis with the Timbers especially. In their quarter-final match, they squeezed past Cincinnati FC in a 4-2 penalty shootout victory. On the other hand, the Union beat Sporting Kansas City more comfortably, ending the match with a 3-1 win.

These two clubs will be searching for a spot in the final after a full month of football which kickstarted the MLS season once again. Other leagues in the world such as the Premier League resumed league play in order to finish the season. However, the MLS had to change plans considering their season was only two weeks into the fixtures when the virus hit. Despite a change in plans, the tournament has provided some exhilarating matches.

This tactical analysis and match report will analyze the tactics for both sides during Portland Timbers’ 2-1 victory over the Philadelphia Union. 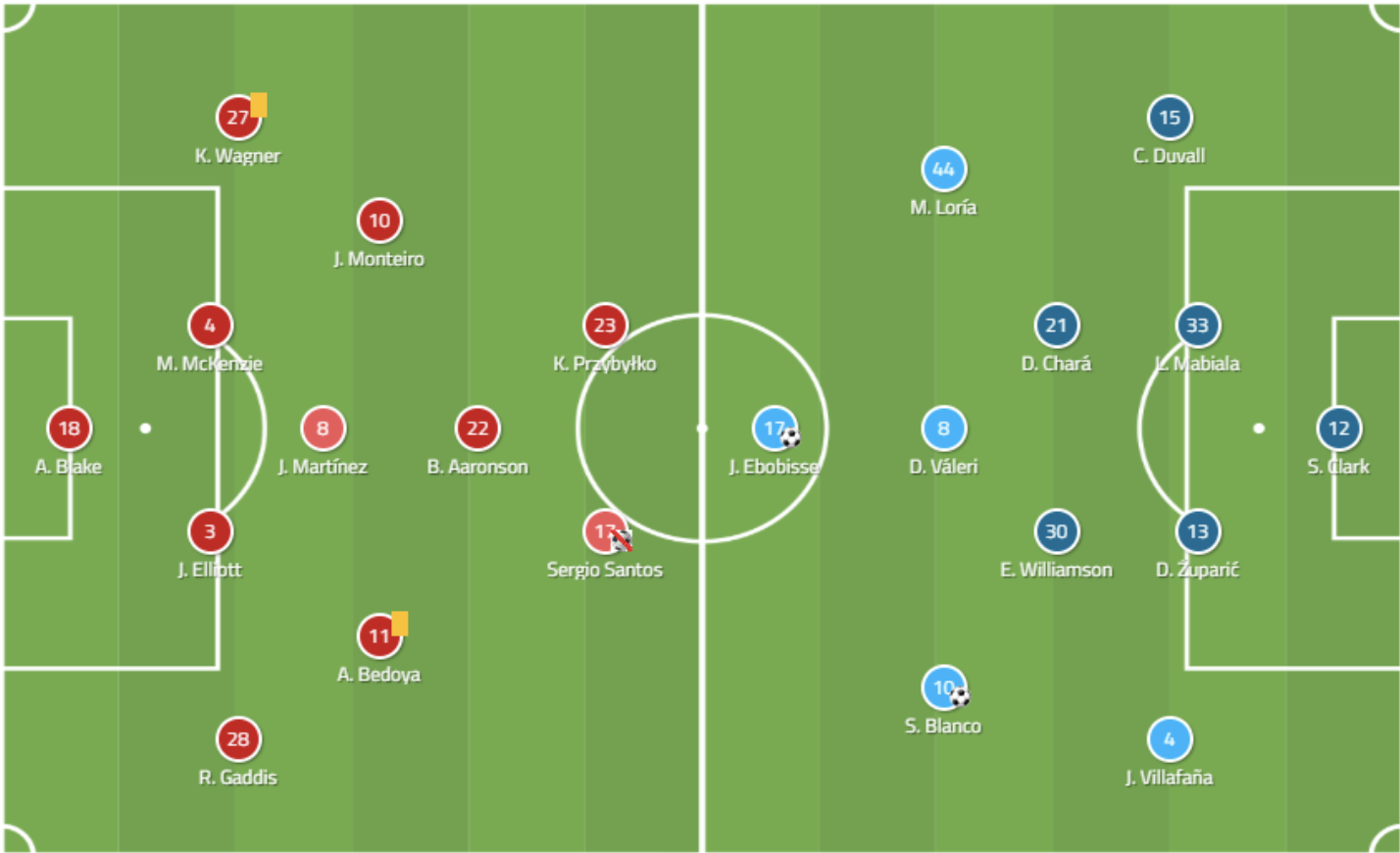 Both teams lined up in a four back for this semi-final match up with each manager playing a fairly similar system at the opening whistle. Giovanni Savarese of the Portland Timbers preferred the 4-2-3-1 with the dangerous wide players of Sebastian Blanco and Marvin Loria combining with Diego Valeri as the attacking three playing behind the striker.

Contrarily, Jim Curtain went with a 4-3-1-2 formation, with his front three creating a triangle made up of two strikers and an attacking midfielder. While this shape was different, the main creator in the team was Jamiro Monteiro, who completed the most passes of the match compared to any other player on the pitch.

After going up 1-0 early in the first half, the Timber’s tactics began to shift to a defensive-minded set-up. This tactical shift was a key part of the match and the tactics during the 90 minutes. Because Portland led early on thanks to a set-piece goal, they were comfortable allowing the Union to take control of the match in terms of possession. At the end of the 90 minutes, the Philadelphia Union had 63% possession of the ball compared to the Portland Timbers 37% possession. Furthermore, the Union had 32:08 minutes of pure possession time while the Timbers had only 18:36 minutes. It is clear in these statistics that the Union had more of the ball, but they could not win the match.

The reason Portland was so comfortable in allowing the Union to have possession of the ball is that they knew they could control the game defensively. Possession does not always lead to a victory; it is about effective possession and what you can create while in control of the ball that will always make the difference. We sometimes see this principle taking effect when Manchester City or Barcelona will lose a match despite having the lion’s share of possession. In order to defend this statement, it is important to analyze the attacking area of both teams.

From the table above, it is clear that despite having far less possession, the Timbers still created an equivalent number of chances. In order to do this, they had to defend well and encourage the Union to attack them so they could hit them on the counter-attack, which they did.

The Timbers’ average positioning map is a great representation of how deep they really were when defending during the match. The back-line would sit incredibly deep allowing for the Union to push up the pitch. This worked for them because Savarese knew that the front three could hit quickly on the counter-attack to try and score goals. The midfield three that are congested in the middle of the pitch show the precise nature of the defending and attacking throughout the match. It is important to note this map is an average of the whole 90 minutes, therefore players average position could be very close together. 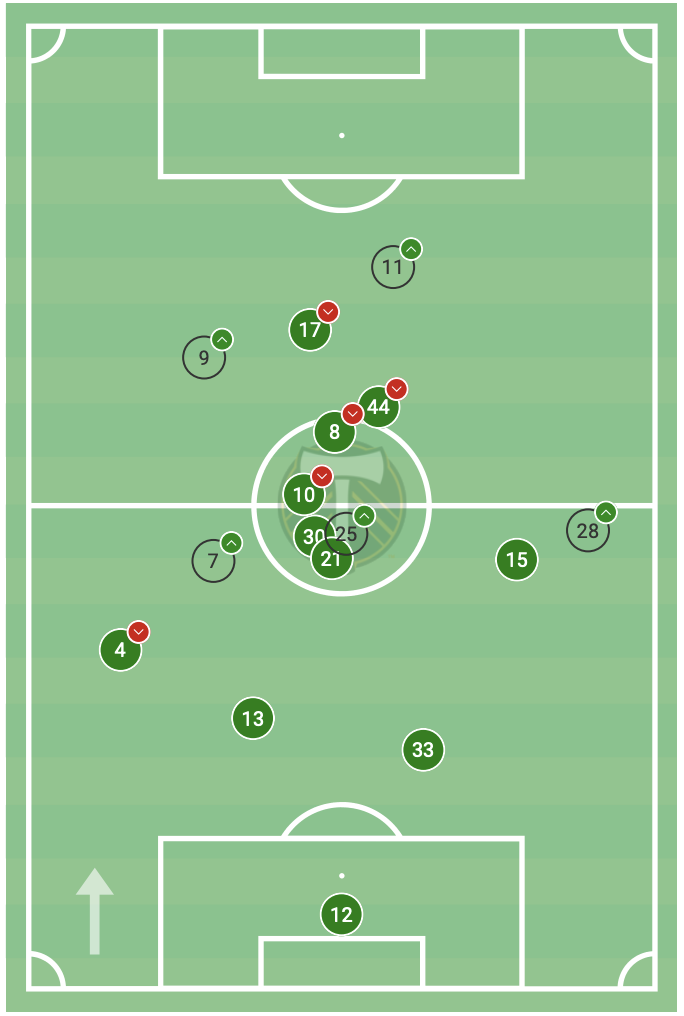 This picture tells the story that the Timbers wanted to block off the middle areas of the pitch, forcing the Union out wide or even challenging them to break down their shape.

An example of how limiting Portland was when defending can be seen in the analysis below. Their defensive shape is very structured. They have two lines or four defenders with Valeri as the player available as the outlet for the counter-attack who also presses the ball carrier of the opposing team. While the Union attacked, the Timbers did not break from this defensive structure and were very disciplined. This created major problems for Philly as they struggled to get through the two lines. There was little to no half-spaces that could be exploited, a key reason why Portland did so well during the match.

It’s impossible to discuss this semi-final matchup without mentioning the set-pieces that the Philadelphia Union conceded or missed. Set-pieces are an incredibly important part of any match. A team can defend perfectly while the ball is in a fluid motion, but without effective defending from set-pieces, all of that hard work can be undone. Typically, these dangerous situations occur from a free-kick from a crossing position or corner kicks. Teams who struggle with defending an aerial duel will struggle in these situations.

In this match, the Philadelphia Union had to defend five corners, allowing three chances on goal or a 60% chance creation for the Portland Timbers. The Timbers had to defend four shots and allowed one chance. While it is not realistic to expect each chance will be perfectly defended, the Philadelphia Union struggled to defend the corners, hence the poor statistics in terms of chances allowed. Unfortunately for the Union, two of those chances created resulted in a goal scored for the Timbers.

The reason for the two goals conceded lies in the man-marking system that the Union employed. Man-marking is only successful if each player is completely switched on. There is no room for error because if the attacker creates space and gets ahead of the defender, he is likely to earn a free-header. While this could be said about any marking system, the zonal marking system limits that chance due to space. In a zonal system, players defend a particular zone and are less focused on the player they are defending. Obviously, defenders are aware of where the attackers are, but the primary focus is attacking the ball if it enters the zone.

For the first goal, most of the Union defenders are marking tightly and are in a good position to defend, however, as highlighted earlier, all it takes is one mistake with this marking system. In the analysis below, you can see this taking shape. The defender is not close enough to the attacking player, Jeremey Ebobisse. Notice how every other defender is very close to his marker. 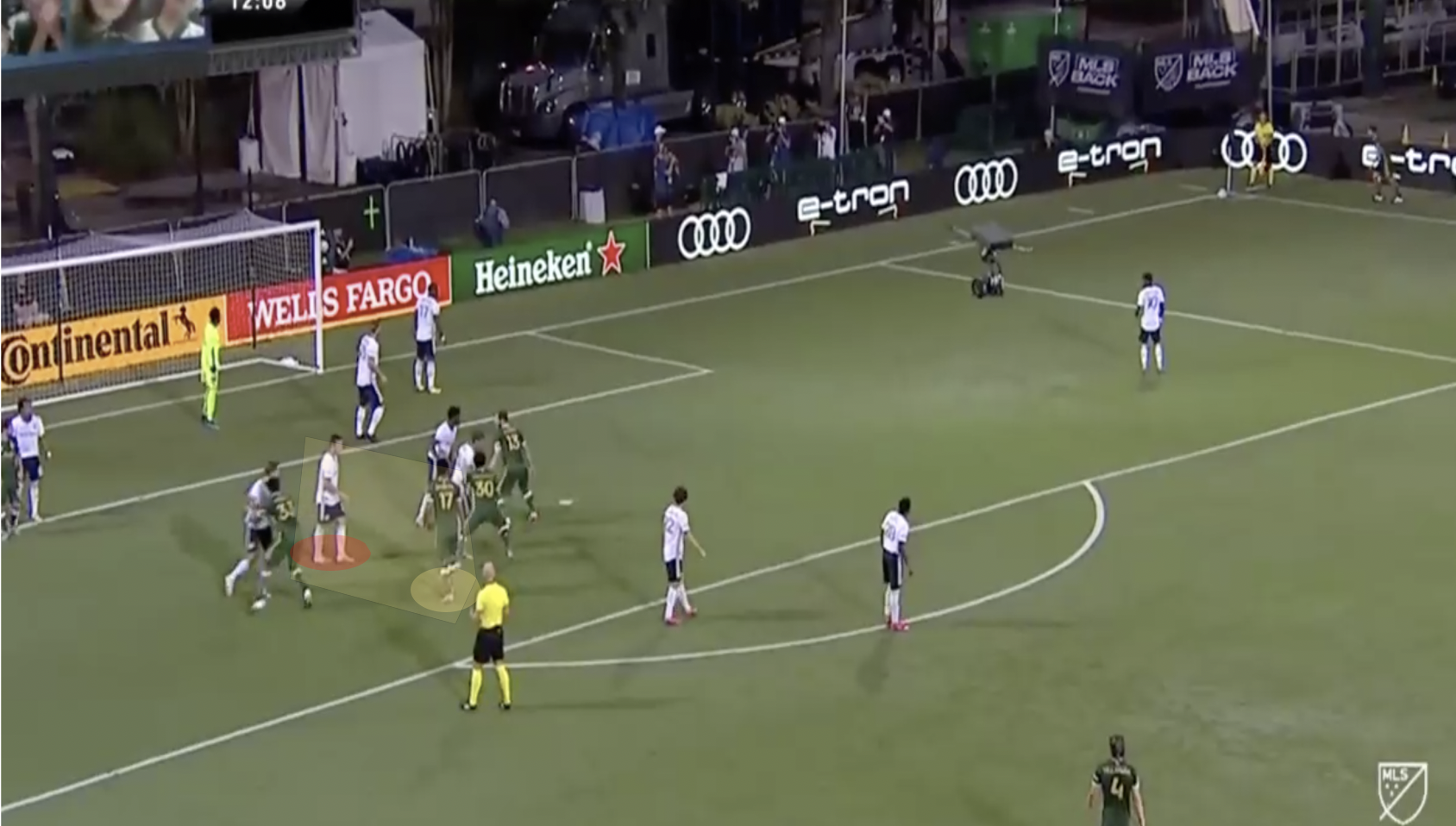 As the ball is whipped in, the defender stays still while the attacker breezes past him in order to win the header. He has a free-header and scored easily past Andre Blake of the Union. This is unacceptable at this level in a match of this magnitude. It is something that needed to be addressed and perhaps even changed to a zonal marking system (although unless trained this is very difficult and not recommended to do during a match.) 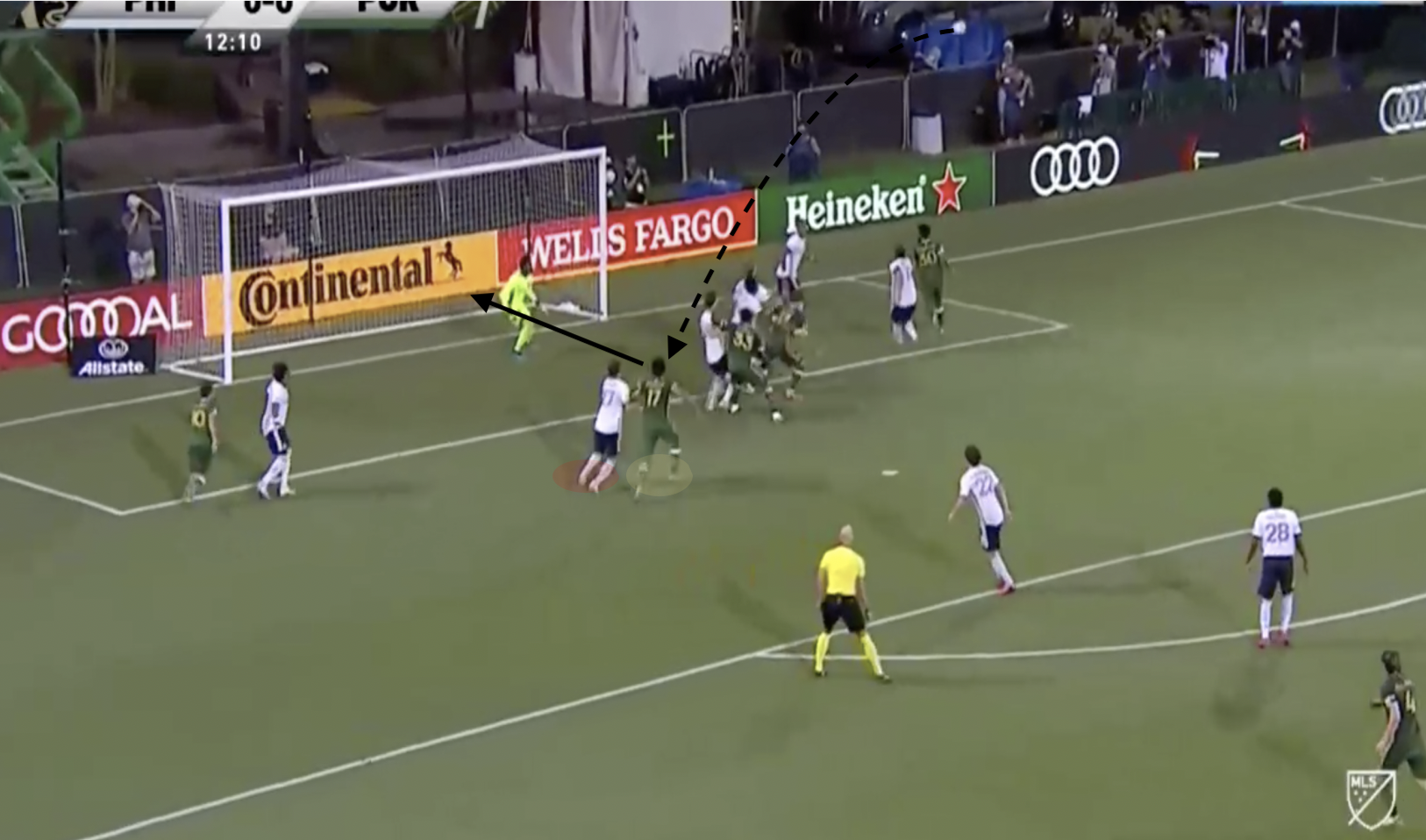 The second goal the Union conceded occurred from a very similar situation. From first glance at the sequence below, you would assume that each player is properly covered and defended well. However, it is crucial that each man who has to defend continues with his responsibility. Once the kick is taken, Philly switches off.

Portland wins an aerial duel which could have been little to no threat to Philadelphia if they continued to mark well enough. In this situation, because the Union defender did not continue to mark his man, Blanco was wide-open on the back post to head home the match-winning goal.

The Union’s pain did not stop there. They conceded two goals from set-pieces while failing to score from the penalty spot. They were awarded a penalty late in the first half, yet Sergio Santos skyed the ball over the bar.

This match was a cagey affair that could have gone either way. From a viewer’s perspective, they would probably claim that the Philadelphia Union deserved to win based on the amount of possession and control they exerted on the match. However, after analysis, it is clear that the Portland Timbers were more effective and executed their tactics better than the Union.

If the Union defended set-pieces better, the score could have been different. Equally, if Portland finished their fantastic chances created in and around the box, the score could have been different. Overall, this match was decided by mistakes rather than the quality of play in terms of creativity for both teams. It is Portland who marches onto the final where they will play Orlando City after their impressive 3-1 win against Minnesota United.