The MLS is Back Tournament is well and truly underway as the second round of fixtures are taking place. Teams are competing in a tournament for a spot in the Concacaf Champions League in 2021. Groups A through F are fighting for a place in the knockout rounds, with this analysis focusing on two clubs in Group A: Orlando City and NYCFC.

Orlando City and NYCFC are two clubs that were formed in the past few seasons. Their squads have bolstered some of European football’s biggest names in league history, such as former Barcelona star David Villa and Juventus player Andrea Pirlo. Most recently, Orlando City has the MLS’ new star, Luís Nani, who has won the UEFA Champions League with Manchester United.

Both teams will be looking to make a statement as the MLS resumes in a different capacity than usual league play. Since the restart, Orlando City has found more success in the first round. Orlando City beat Inter Miami 2-1 in the first round while NYCFC lost to the Philadelphia Union 1-0 in their opener. With the tournament being held in Orlando, the hosts will hope to continue their fine run of form. This tactical analysis and match report will analyze the tactics for both sides during Orlando City’s 3-1 victory over NYCFC. 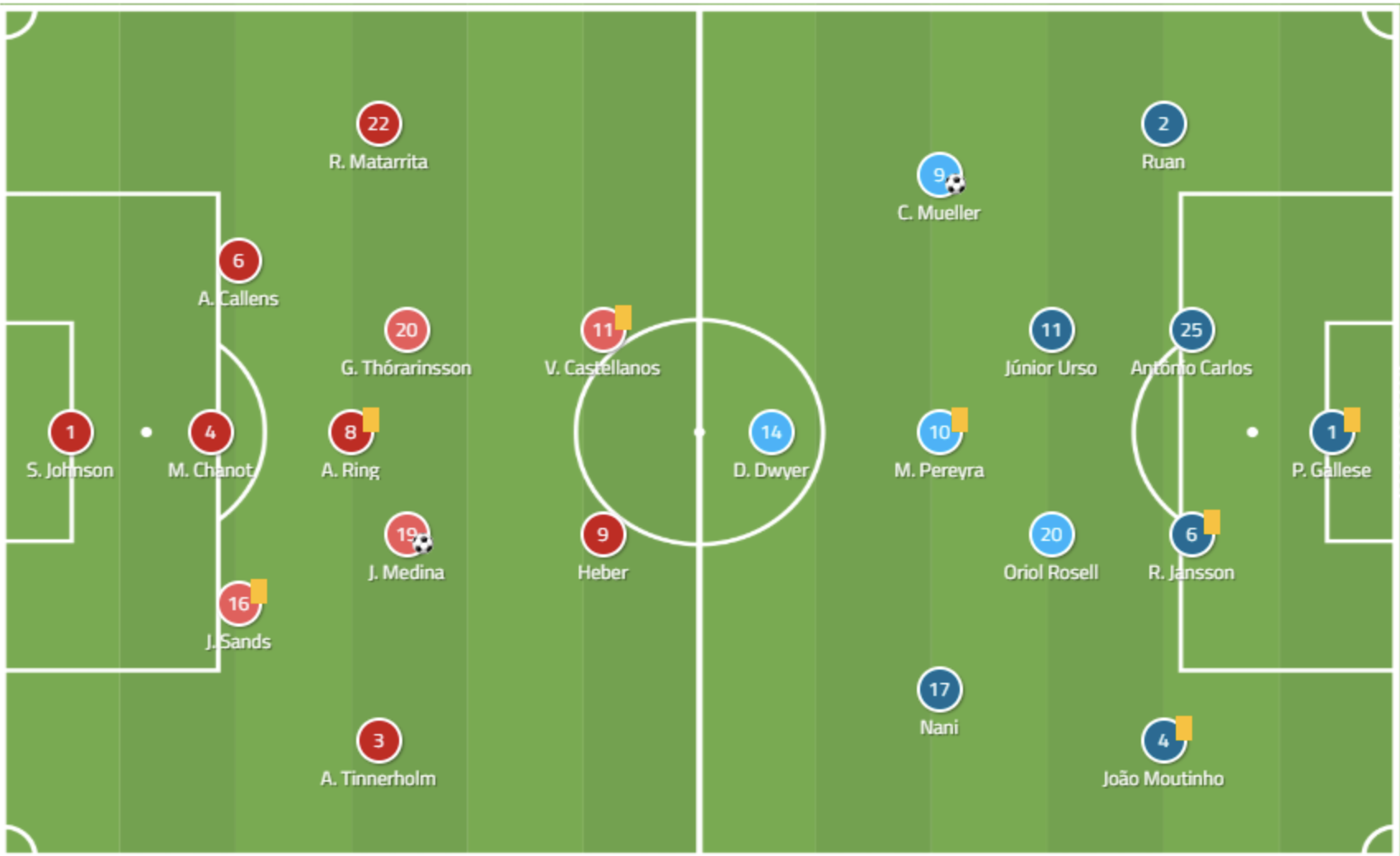 The formations of managers Ronny Delia (NYCFC) and Oscar Pareja (Orlando City) played a crucial role in the match, which will be analyzed later in the match report. In regards to how each team started, Orlando City lined up in a fairly balanced 4-2-3-1. With the two pivot players in Junior Urso and Oriol Rosell providing defensive cover in front of the back four, this allowed Orlando City’s lethal attack to get forward. They utilised a lone striker with three attacking midfielders in behind that provided creative attacking opinions. Nani and Chris Mueller were the danger men in Orlando’s attacking three.

For NYCFC, there was a slightly more radical formation as they started in a 3-1-4-2. With the back three holding, the role of Alexander Ring becomes crucial as he is the main connector between the defence and attack. With six attacking players on the team sheet, it is clear that Delia wanted to create an overload when attacking to expose Orlando City’s attacking nature. However, what Orlando City possessed and NYCFC did not was balance in their formation. This match analysis will uncover why this is the case.

Within the first 10 minutes, Orlando City was up 2-0. The reason for this has to do with multiple factors. The first factor will be covered in this section of the analysis, which focuses on the player positioning of the outside attacking midfielders, Nani and Mueller. When the left and right-sided centre-backs of NYCFC, James Sands and Alexander Callens, are in possession when trying to build out of the back, Orlando City’s positioning is fantastic. Pareja’s tactics encourage his players to push high up the pitch which leads to a very high average position. This caused NYCFC to have less space with the ball and to play more long balls. 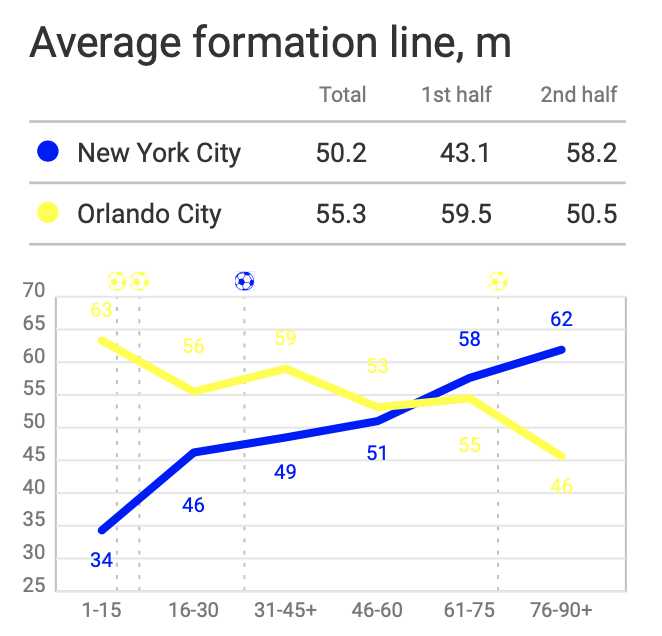 The graph above illustrates this point. New York City was pinned into their own half with nowhere to go. If the team’s average positioning was at the midfield line, their average formation line would be 50. Therefore, 34 meters is incredibly close to their own goal. Orlando City was comfortably inside NYCFC’s half and was attacking at will.

Their defensive shape while pressing NYCFC (while the defenders were in possession) was exceptional and the main reason they gained an early advantage in the match. The analysis below shows exactly how Orlando pressed. Because City had a back three, this became a huge advantage for Orlando. 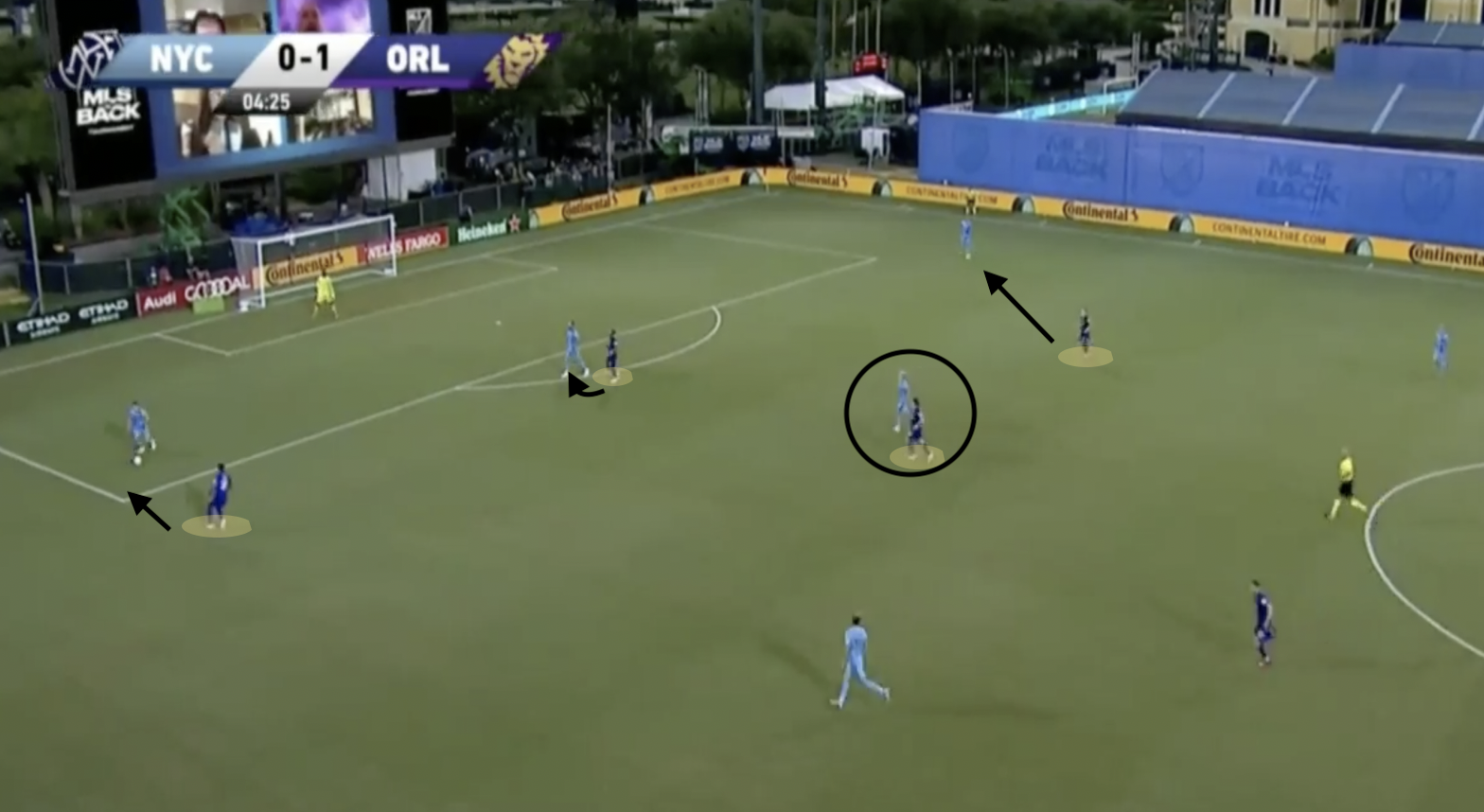 Orlando’s formation complemented this pressing strategy well. Nani and Mueller could cover the outside centre-backs while the striker pressed on the central defender, Maxime Chanont. The key to this press was not the fact that the outside centre-backs are covered well; the key was in the covering of NYCFC’s defensive midfielder, King. As highlighted earlier in the analysis, King is incredibly important because he connects the defence to the midfield. With the ability to get him the ball nullified by Mauricio Pereira (circled above).

Orlando’s early advantage did not last long due to the NYCFC manager identifying the problem highlighted in the previous section of the analysis. After the water break, NYCFC changed from a 3-1-4-2 to a 4-4-2. This change in formation provided more balance to the side in both defence and attack. In order to understand how this change is effective, it is important to understand why the 3-1-4-2 was ineffective. It is touched on in the section above where Orlando’s pressing and positioning nullify City’s tactics. 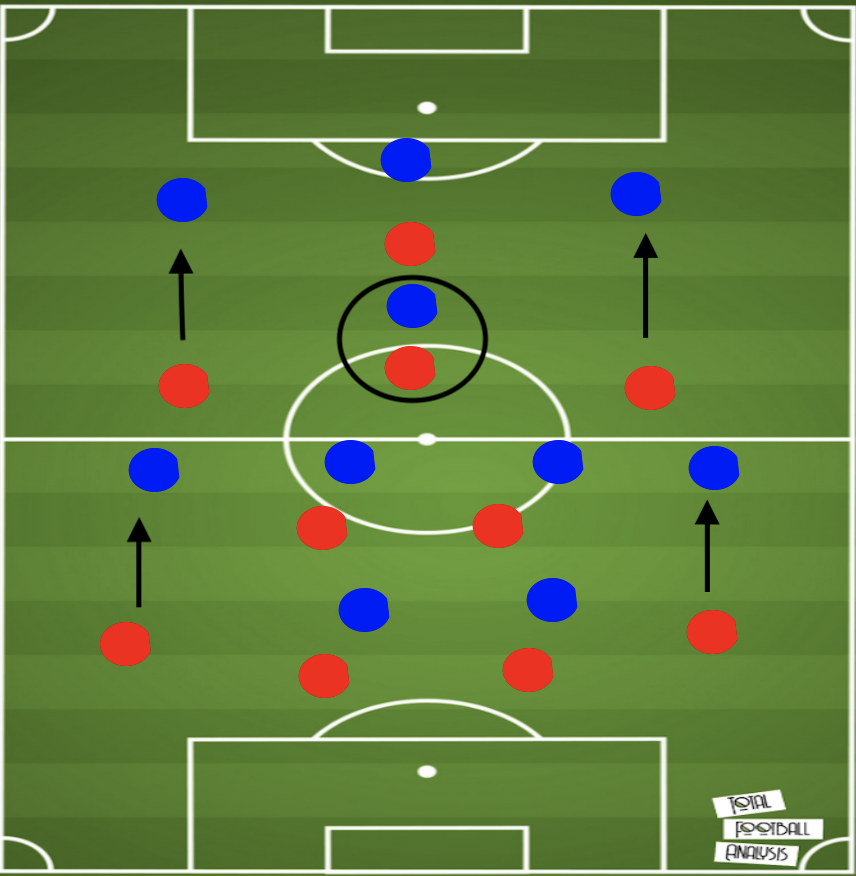 In this formation, there is a 3 v 3 between the defenders and the forward line of each team, as well as a direct matchup between the central defensive midfielder and Orlando’s attacking midfielder (Orlando City is red; NYCFC is blue). Furthermore, the wing-backs of Orlando City can push up to the open spaces because the midfield for Orlando is extremely controlled. This is illustrated by the arrows above showing how the outside backs can cover the dangerous spaces. Because the midfielders have control, there is no threat in the half-spaces for Orlando City, essentially making it extremely difficult for NYCFC get out of their own half. This is the reason they experienced such a poor average formation line and difficulty building out of the back.

The diagram below shows how NYCFC reacted to finding new spaces by switching to a 4-4-2. It is easy to see the difference in how this formation differs from the 3-1-4-2. If Orlando were to replicate the pressing structure that they did in the first twenty minutes of the match, that would leave a 2 v 1 situation in the middle of the pitch. Pereira could not cover both midfielders either side of him and the NYCFC players could turn and drive up the pitch. This is what led to a much better performance for NYCFC after the water break. They were much more balanced. Even if Orlando kept pressing, New York found it much easier to play out of the back. Essentially, the main difference was eliminating the deeper-lying holding midfielder and adding an extra defender. Because King was being ineffective in that position anyway, it was a very logical decision by the manager. 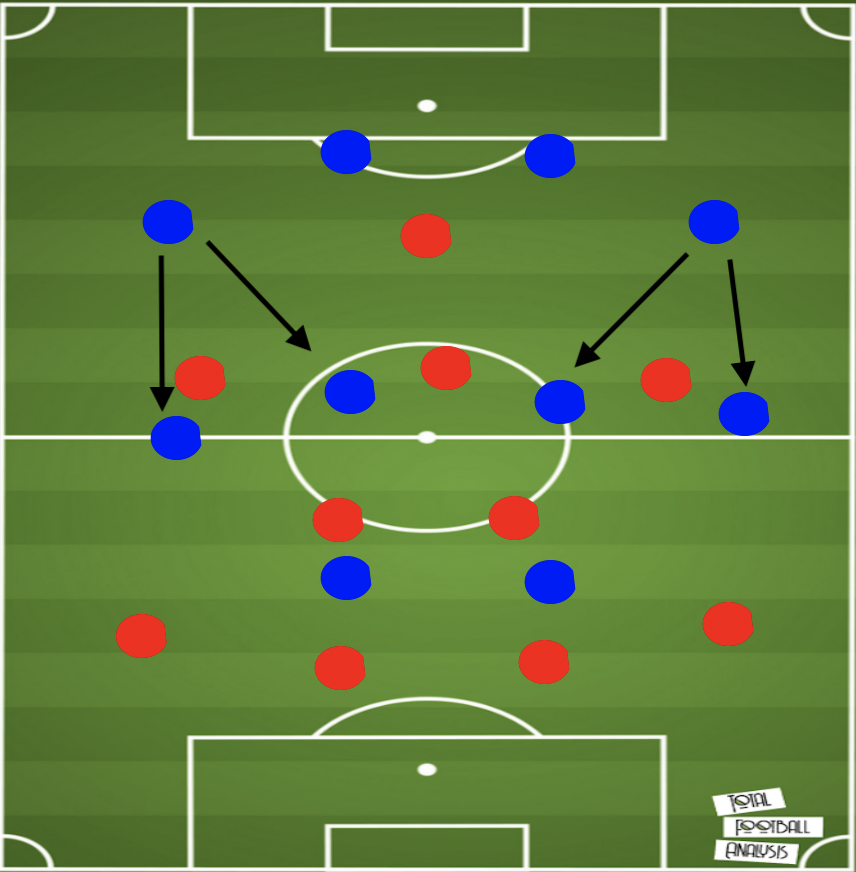 An example of how NYCFC built out of the back and found much more success because of the formation change occurred after the water break. In this analysis, New York is in a back four. Therefore, because there is an extra option, it makes it difficult for Orlando to press as closely as they did in the earlier image. The right-back has far more options than just booting it up the pitch as he brings the ball under control. This time, there is a midfield option available because the attacking midfielder can not get close to the two central midfielders. 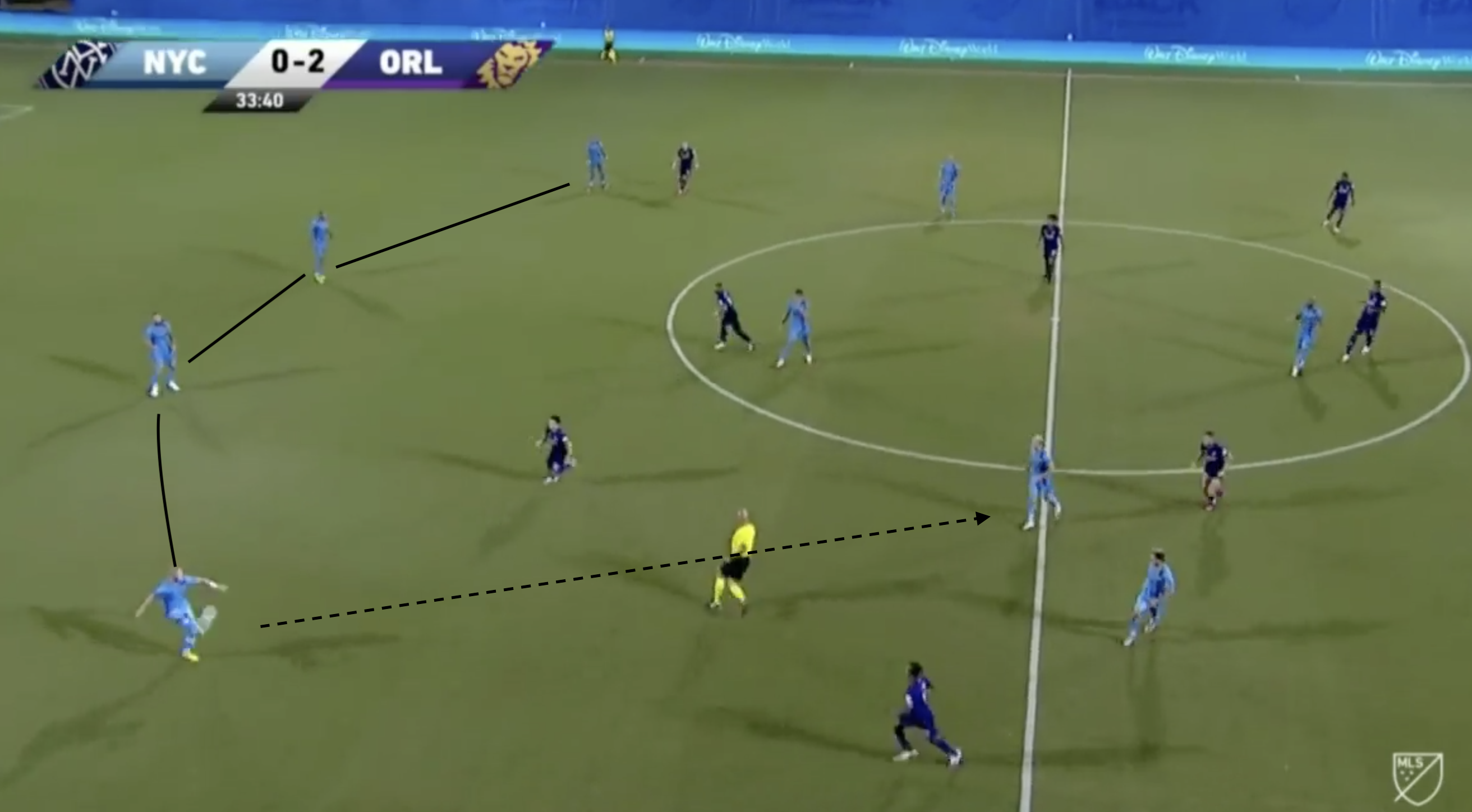 After establishing the formation change, NYCFC started to grow more into the match and it became much more balanced. Orlando began to decrease in their attacking production while New York City FC increased their attacking production. Part of this could have been the tactics or Orlando becoming a bit less intensive when pressing due to the lead they established early on in the match. However, NYCFC created more and got on the scoresheet late on in the first half. 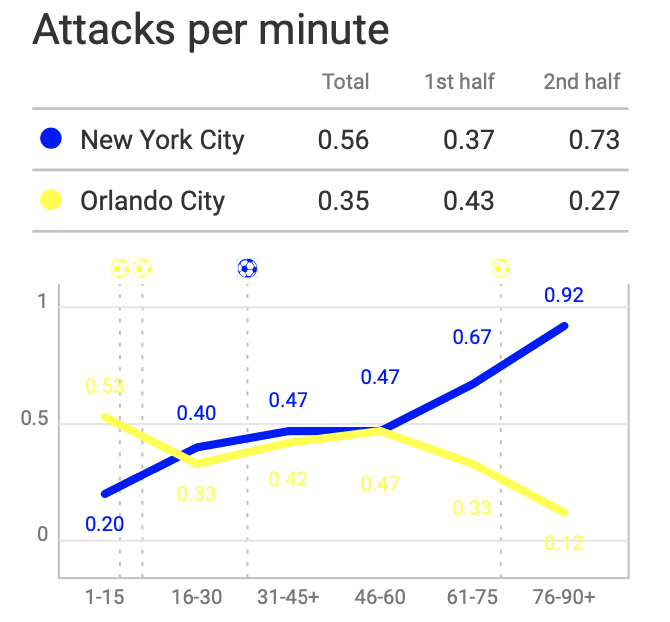 In the second half, NYCFC had an xG of 1.19 compared to the first half xG of 0.85. Part of this significant change was due to their ability to build out of the back and be able to push further forward up the pitch. The graph above shows a similar trend to the first graph in the match analysis. Orlando City grew out of the match while New York City found more success as the match went on. By the end of the match, NYCFC had 22 shots and Orlando City registered 8 shots. This is a staggering difference which perhaps does not show on the final scoreline.

This match analysis shows just how important it is for the manager to pick the right formation that will provide a balanced team that can keep possession of the ball. In the first part of the match, New York City FC was not set up correctly. Ronny Delia, NYCFC’s manager, should be held responsible for this result. It was clear that his side was extremely capable of playing progressive football that created lots of chances, but he did not set up his team to succeed. Once the changes were made, there was linear progression in terms of statistics and the football caught the eye of the viewer.

In regards to Orlando City, they achieved what they set out to do. The early press was rewarded with two quick goals inside ten minutes. After that, they did a fairly good job defensively stopping NYCFC as they launched attack after attack. Near the end of the match, Orlando effectively killed the match with a goal on the counter-attack.

As both of these teams enter the final round of the group stage, it will be interesting to see how they set up at the start. Ultimately, that was the major difference in this match.