Shakhtar Donetsk came out 2-1 victors in their away tie against Wolfsburg in the UEFA Europa League back in March. 146 days later and the teams battled out in the return fixture at the Metalist Stadium in Kharkiv.

The Ukrainian side had already secured UEFA Champions League qualification for the following season through their domestic campaign, where they finished at the summit of the table. Meanwhile, Wolfsburg’s slim hopes of qualifying for European’s most prestigious competition laid on them securing a win by two or more goals on the night, due to Shakhtar Donetsk securing two away goals themselves in the 2-1 win back in March.

The first half ended in a stalemate, however, it was clear that Shakhtar had the quality to create chances throughout the match. It was not until the 89th minute that they finally managed to score past Koen Casteels. Two more goals in added time made the scoreline more flattering, however, it does not show the difficulty of the match.

This tactical analysis will be looking into the different tactics implemented by each manager and ultimately look to show, through analysis, why Shakhtar Donetsk came out on top.

Luis Castro lined his side up in their standard 4-2-3-1. Andriy Pyatov was between the sticks, his backline consisted of Dodô, Davit Khocholava, Sergiy Kryvtsov and Mykola Matvienko. Both Marcos Antônio and Taras Stepanenko operated in the midfield pivot, meanwhile, the danger men for Shakhtar included Marlos, Alan Patrick, Taison and Júnior Moraes as the striker. 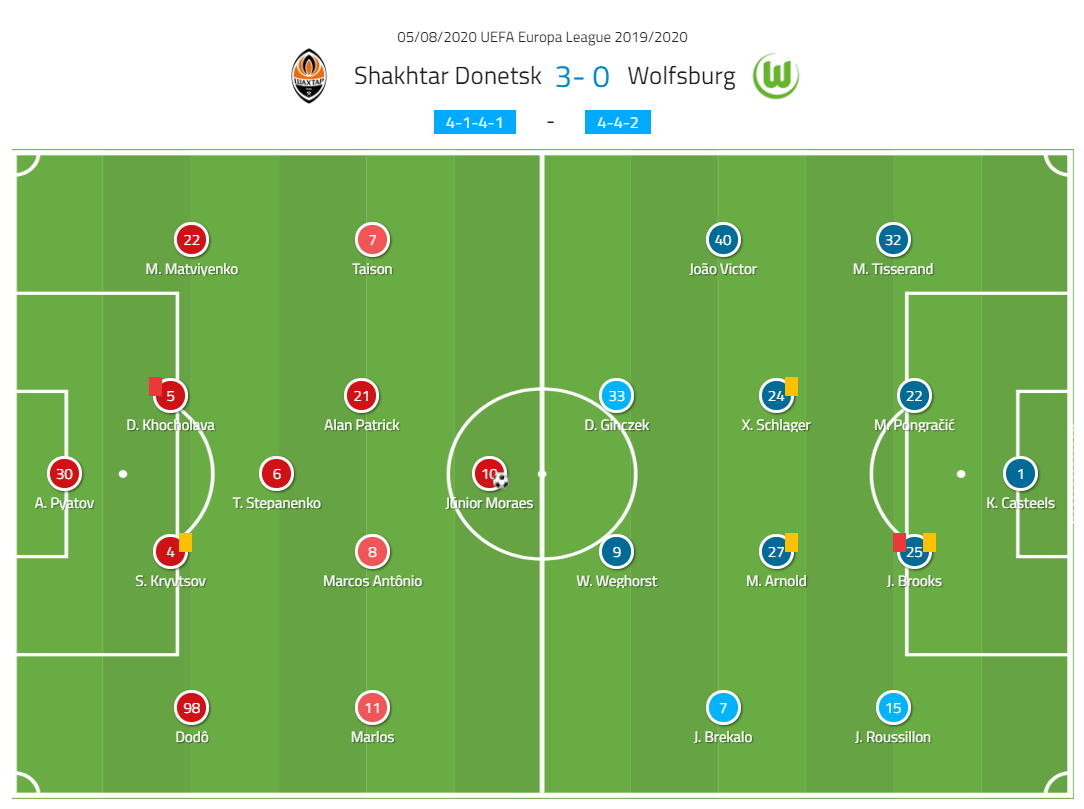 Wolfsburg had to deal without their starting right-back, Kevin Mbabu, after the Swiss international tested positive for COVID-19 last week. Instead, Wolfsburg used Marcel Tisserand as a right-back, with Marin Pongracic, John Brooks and Jérôme Roussillon alongside him and Koen Casteels behind him. The usual midfield pivot of Xaver Schlager and Maximilian Arnold was used by Oliver Glasner, with João Victor and Josip Brekalo operating on the flanks. This left former Borussia Dortmund player, Daniel Ginczek and top goalscorer, Wout Weghorst to play through the middle in a 4-4-2.

Wolfsburg looked to engage in a high press once Shakhtar moved the ball into the second phase. They didn’t want Shaktar to be able to find their danger men and looked to stop them from receiving the ball in dangerous areas by stopping their supply in the second third. Wolfsburg implemented a narrow shape with both wingers (#7 and #40) in narrower positions, as shown through Wolfsburg’s average positions through the match below. They did this so that Shakhtar would have even less time to play in the middle third. 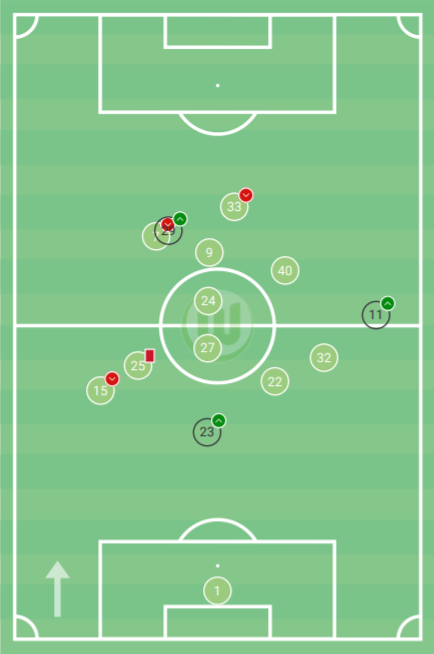 The main men who helped implement this press were the midfield duo of Schlager and Arnold. Together, they were involved in 30 defensive duels, showing the amount of work they did in their pressing system. The success rate between them was 50%, suggesting that even though this was somewhat successful for Wolfsburg, who had an average PPDA of 7.9 in the match, it was not fully effective throughout the whole game. 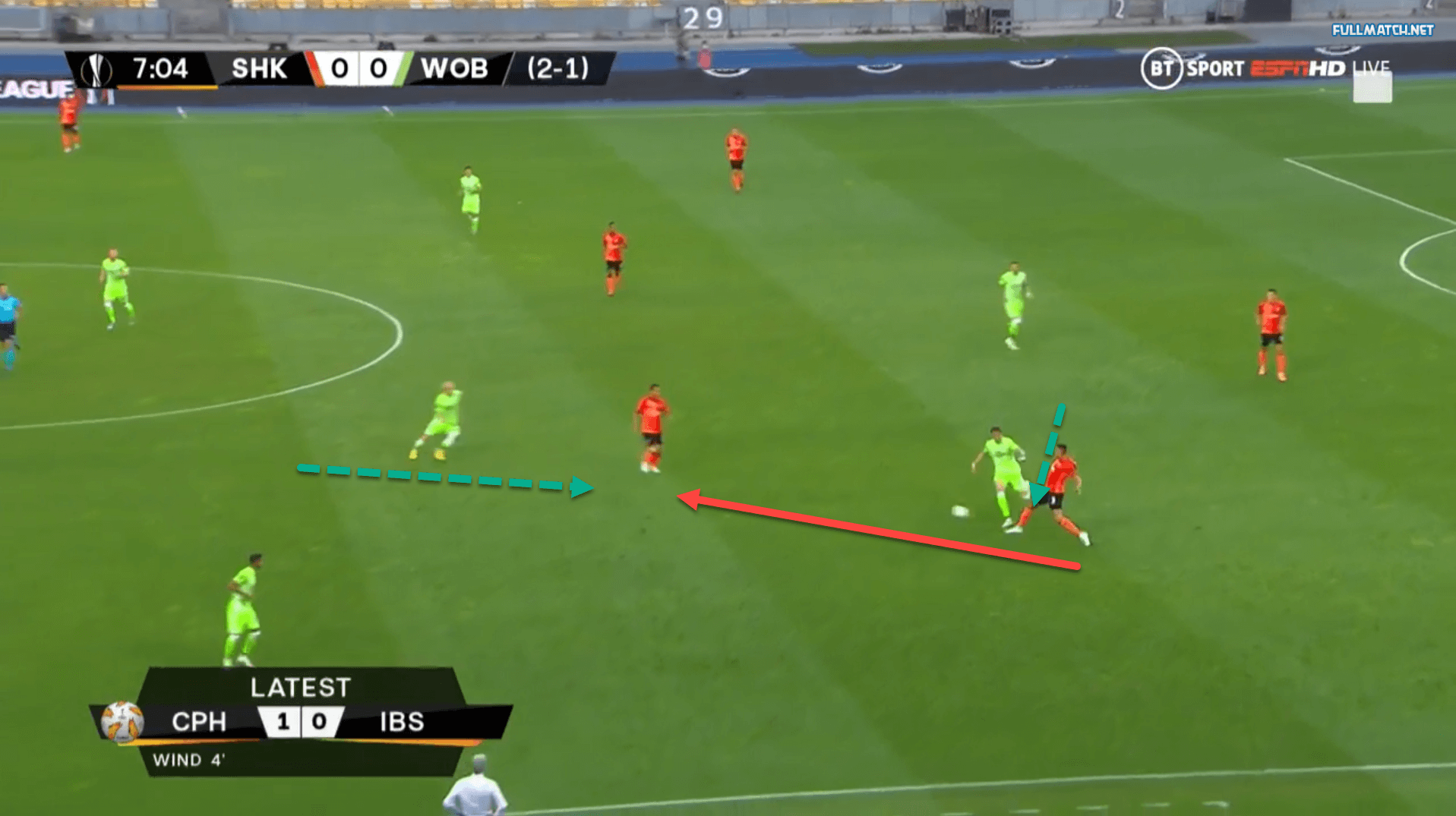 We can see the effects of this second phase press from Dortmund in the image above, where the ball is played into Patrick, with Shakhtar looking to move the ball into the second phase. Schlager presses the Shakhtar midfielder and wins the ball and this allows Wolfsburg to regain possession and ultimately leads to a shot at the end of an attack, which started through Wolfsburg’s second phase press. 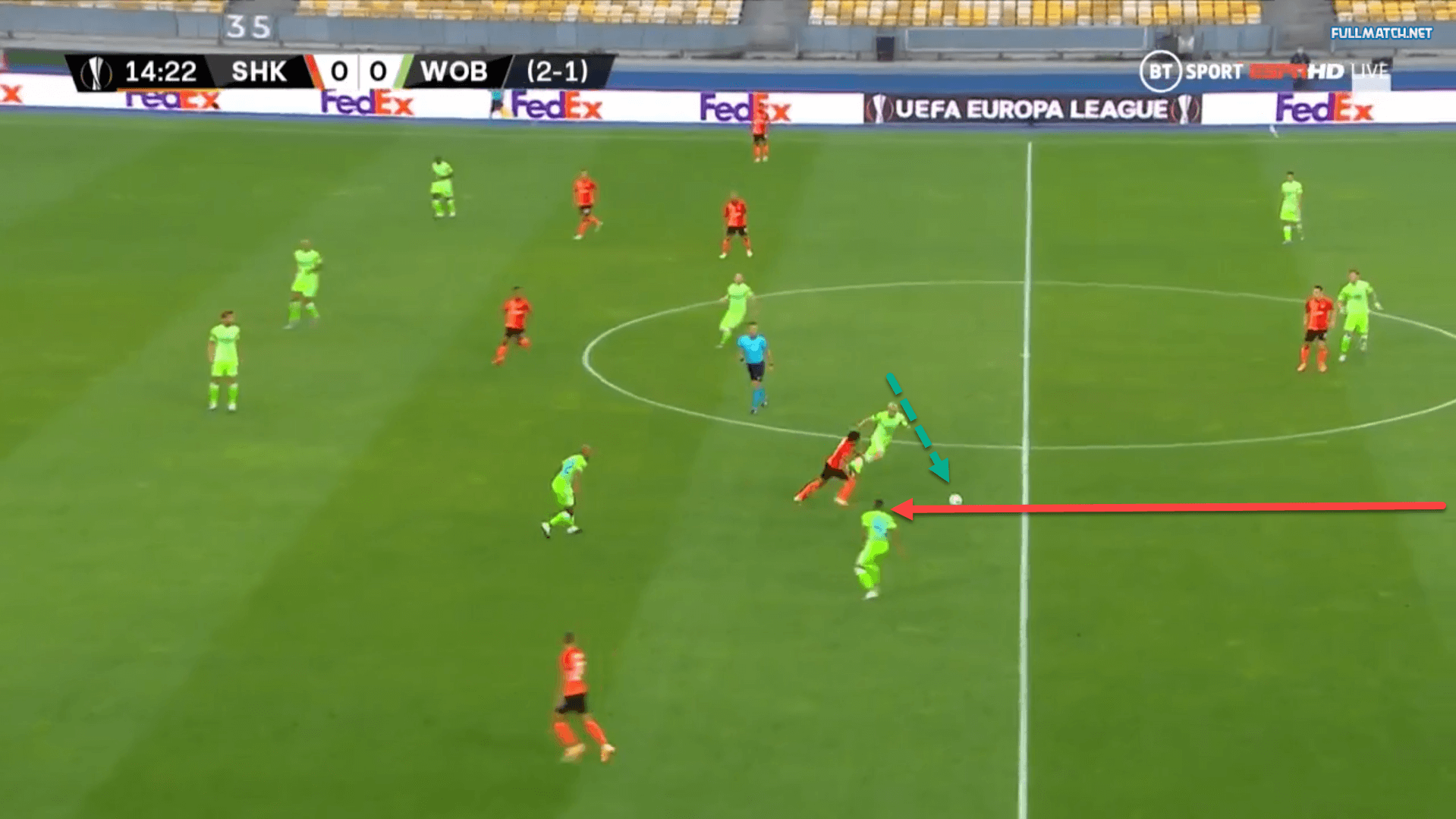 Again, the above image shows Wolfsburg’s high second phase press in action. Khocholava plays a good progressive pass into Taison’s feet in the half-space. However, the Brazilian takes a poor first touch and Schlager is on hand to tackle him and then play forward into Weghorst. Unfortunately, the pass was not accurate enough.

The second phase press was a clear tactic implemented by Glasner, in order to limit the impact of the front men. Yet, when Shakhtar were in quick transitions, Wolfsburg could not keep up with Shakhtar and their pacey forward line. This will be explained further, later in the analysis.

Another clear tactic which Wolfsburg used throughout the match was their direct play in their build-up. Yet again, Schlager and Arnold were pivotal in this aspect of Wolfsburg’s tactics. Wolfsburg looked to find the two midfielders in their build-up and then they would look to play passes between the lines or behind the Shakhtar backline. The Wolfsburg midfield duo attempted 18 passes into the final third in the match with 12 of them being successful. We should note that the lower success percentage is due to the difficulty of pass that the two players were playing.

This was the area which Wolfsburg looked most dangerous, with 16 of their 31 attacks coming through the centre as well as 0.43 of their 1.01 xG.

In the above example, we can see Brooks play a direct, verticle pass into Schlager, who peels off into the half-space. The midfielder then plays a through ball into João Victor, who is running the channel. He is then able to get a dangerous cross into the area after taking on his full-back. Wolfsburg were able to unleash their winger against the opposition full-back through just two verticle passes. This direct build-up was useful for Wolfsburg. 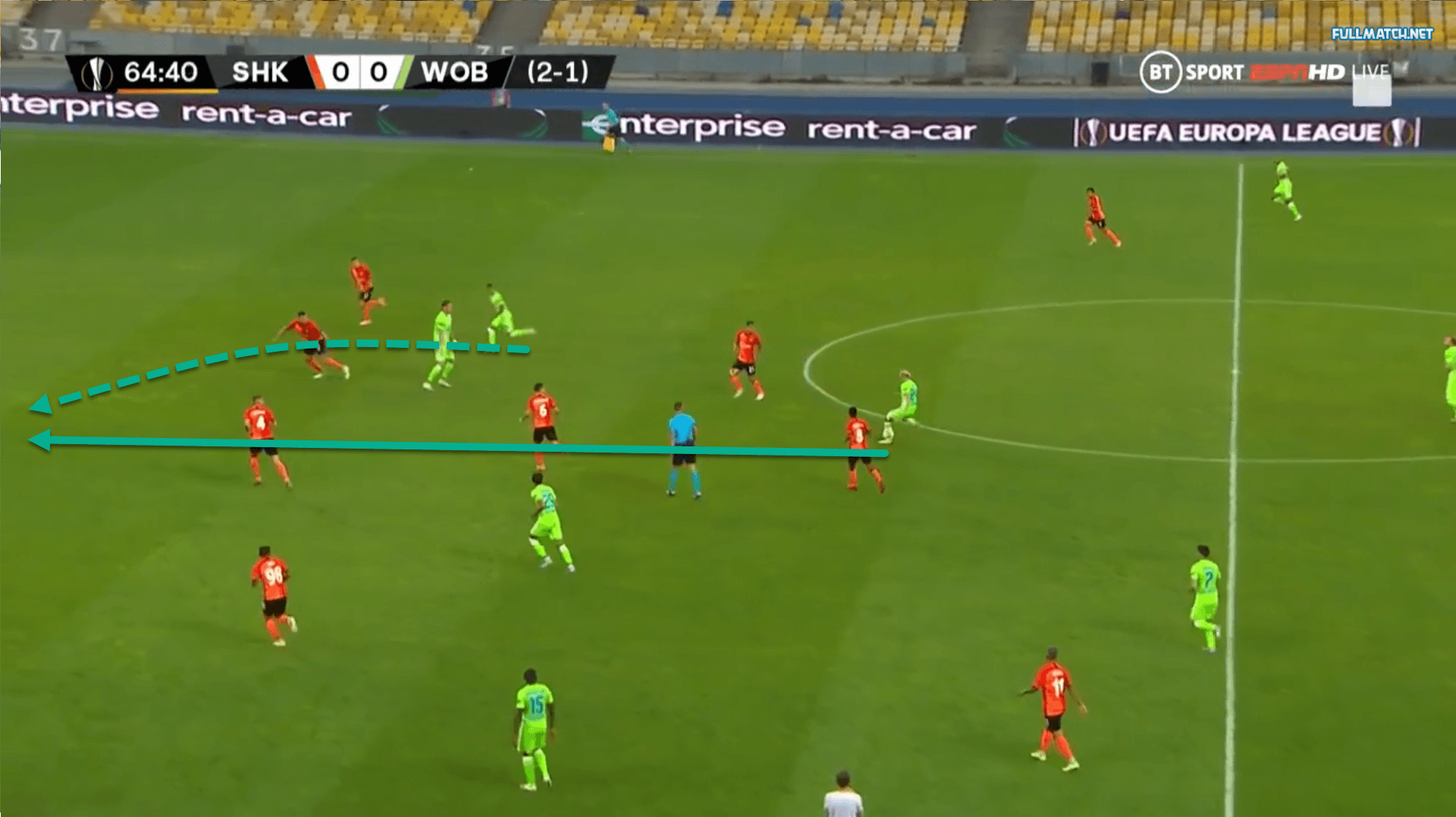 This time, we can see Schlager receive the ball centrally after initial progression on the left. He instantly finds a gap between the Shakhtar backline and plays a pass in behind for João Victor, who is making a diagonal run behind the opposition defence. This results in a free-kick for Wolfsburg and a red card for Khocholava, who took João Victor out as the last man. Wolfsburg were unable to take advantage of the extra man as they found themselves with 10 men after Brooks was sent off just five minutes later.

While Shakhtar were impressive in their quick transitions, Wolfsburg’s backline were also poor at dealing with the pace that the Shakhtar frontmen have. Once Shakhtar made it past the press in the second phase from Wolfsburg, there would be clear spaces behind the Wolfsburg defence to exploit. Without Mbabu at right-back, Wolfsburg had almost no recovery pace on their right side. Shakhtar took advantage of this with through balls, they attempted 10 in the match and seven were successful. Also, 14 of their 40 attacks came from their left, with 0.83 xG too. 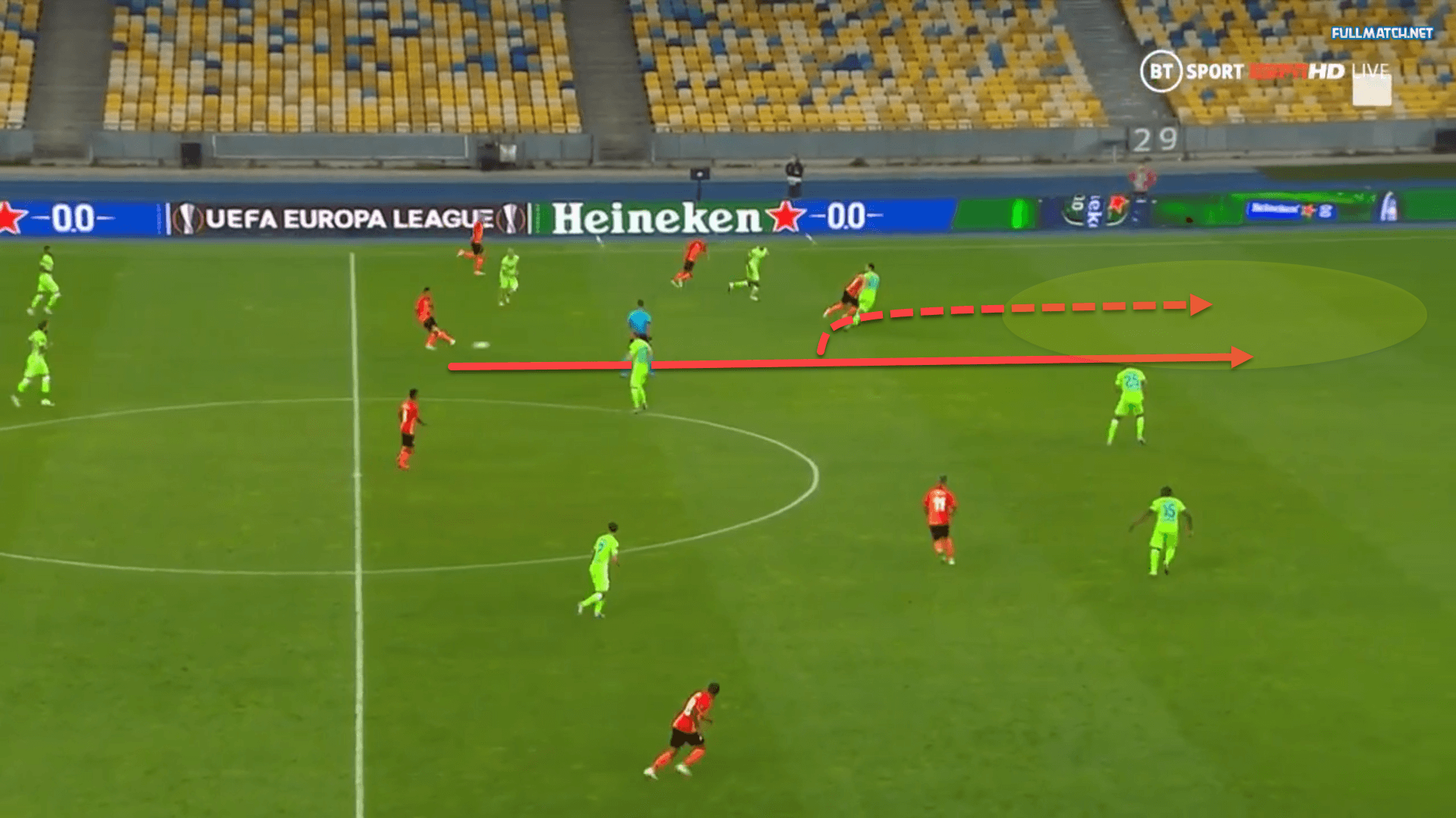 In this image, we can see Patrick on the ball and Wolfsburg have not applied the pressure in the second phase. This means that Taison is able to turn Pongracic and run into the open space behind and receive the through ball from his teammate. He misses the target in the end but this was a clear warning sign which Wolfsburg were unable to deal with. 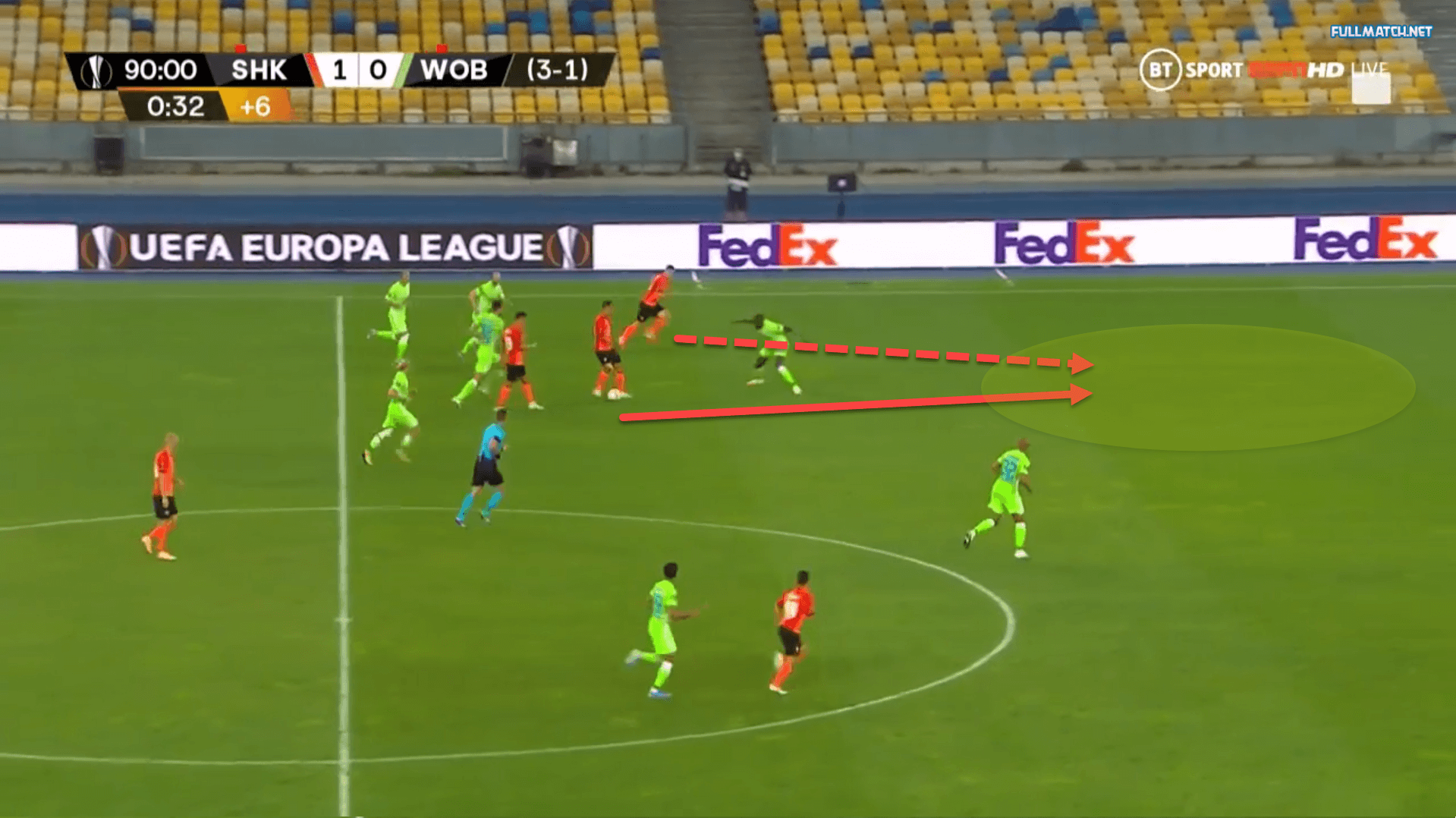 After conceding the first goal, minutes later Wolfsburg conceded a second (and then a third), this second goal came from a Shakhtar transition, where there was clear space to be exploited behind the Wolfsburg backline. Patrick has the ball in the second phase after a long ball into Moraes. Josuha Guilavogui has to engage as Shakhtar has bypassed Wolfsburg’s midfield with the long pass. This creates space in behind for Patrick to play Yevgen Konoplyanka, who drives towards goal and passes across to Manor Solomon, who scores.

The Wolfsburg backline were unable to deal with the Shakhtar transitions due to the fact that they left too much space in behind and didn’t have the recovery pace to compensate. This lack of pace can also easily lead to the defensive line being stretched, creating spaces between the defence and Shakhtar took advantage of this through their attacking combinations, this will be further developed in the next section.

With the players that Shakhtar have in attack, they were always going to cause Wolfsburg problems. Ultimately, their ability and link-up is how they opened the scoring in the 87th minute. The Shakhtar forward players looked to play quick passes into areas of space, which were usually created by the dribble of the player on the ball.

Due to the quality that players such as Taison and Moraes have on the ball, Wolfsburg players would want to stop them from dribbling in and around the box, which, in turn, created space for the other frontmen to receive possession. This helped them dominate the match in terms of chances with 17 shots and nine on target, as well as a total xG of 2.26. 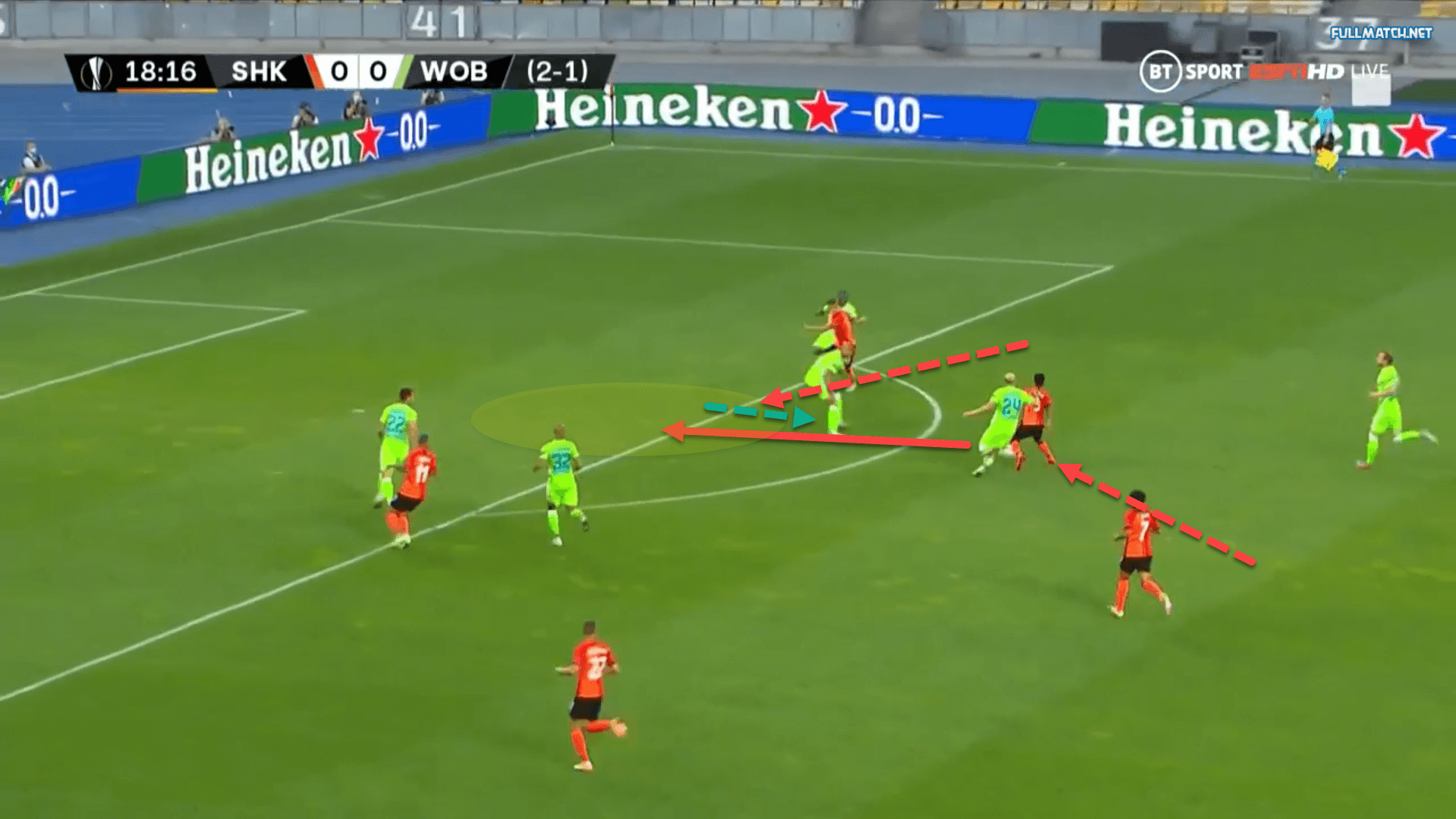 In the above image, we see Antônio dribbling towards the Wolfsburg penalty area. This leads to Brooks stepping out of his defensive line to attempt to stop Antônio. Though, this creates an area of space for Moraes to run into and Antônio to play the pass into that space. Pongracic manages to block the shot from the Ukrainian international. The quick pass and movement from the Shakhtar forwards was impressive and it was clear that it was a matter of time that it turned into a goal for the Ukrainian Premier Liga champions. 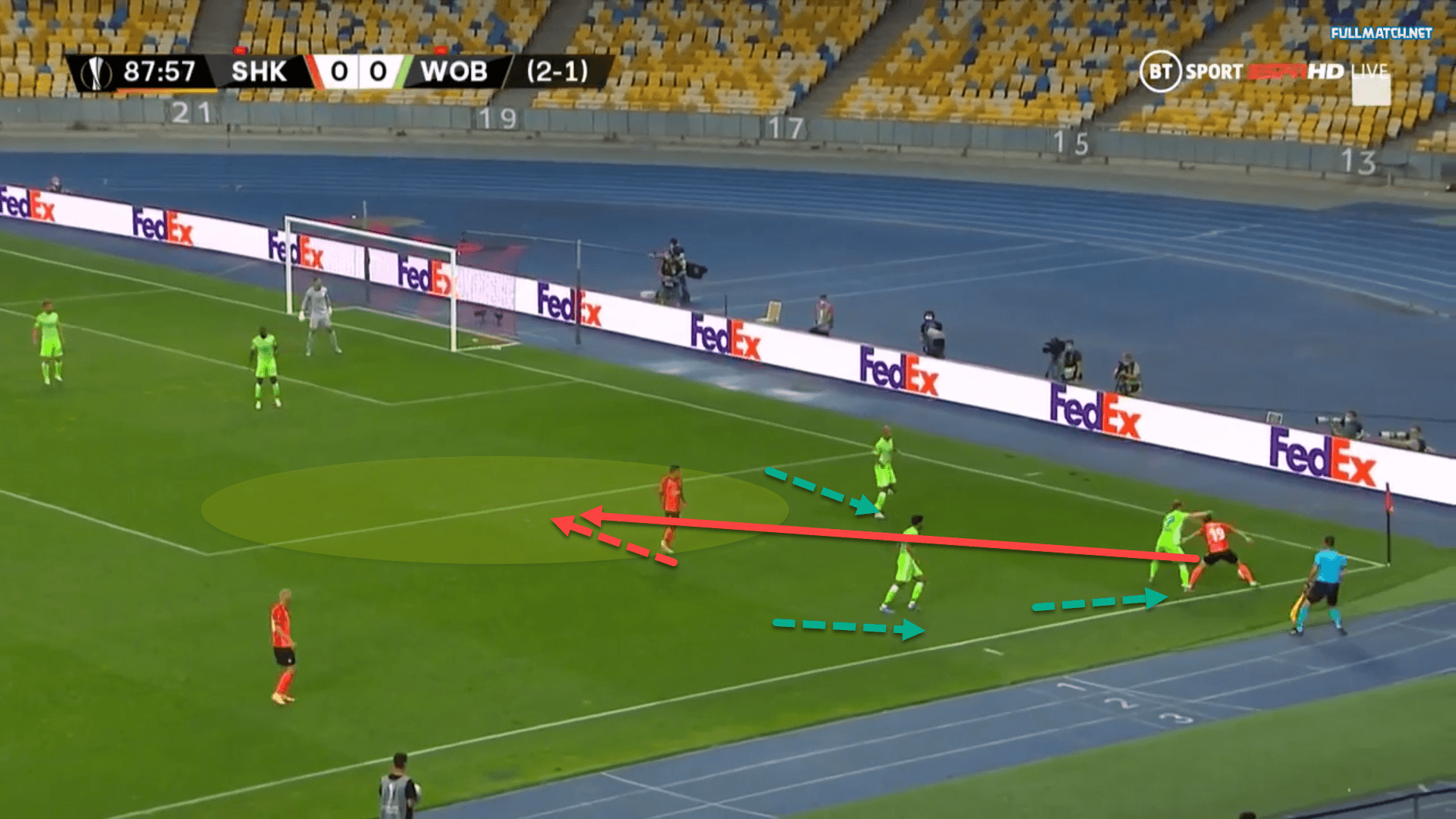 In the build-up to the first goal shown above, we can see the problems that the skilful Solomon causes Wolfsburg in the wide area. Three Wolfsburg players get dragged into the wide area, this creates space for Dodô to receive the ball and he crosses into Moraes, who scores the opening goal and secures the win for Shakhtar Donetsk. The dribbling in the wide area from Solomon was important in creating space in the build-up for this goal.

It seemed clear that Shakhtar would score, their forward line’s ability on the ball and their transitional danger was highlighted in this analysis. While Wolfsburg still has their own chances, created mainly through their direct build-up, they were not good enough to win the match.

Shakhtar Donetsk will be facing either Eintracht Frankfurt or Basel in the next round of the Europa League and then if they win this match, it is likely they will face Inter Milan, who are one of the favourites to win the competition. Although they have managed to beat Wolfsburg, they still have a lot of work to do if they want to reach the later stages of the competition.