FC Dallas have drawn a lot of attention lately because of their tactical switch under Luchi Gonzalez. The 39-year-old manager has since injected a new aura of competitiveness in the young squad, starting an attractive procedure at Toyota Stadium. He worked as the U-16 coach and director of the academy at the club previously, the American has been able to display a tactical revolution, shifting the Dallas side from a physically-based football side to a tactically dynamic and revolutionary squad.

After a decent first season under Luchi Gonzalez, FC Dallas are now a team to watch. In this tactical analysis, we’ll look at the attributes that make this FC Dallas side a centre of an attraction along with an analysis of characteristics of the young manager’s lively philosophy and evolutionary tactics.

Formation and the switch of play

After Oscar Pareja decided to leave the Dallas side, Luchi Gonzalez, who was set to take over the second team, was appointed the Toros’ manager. Gonzalez made things clear, he was going to adopt an attacking style of play, unlike Pareja who liked to take the lead and sit back the time after. Hence came the change in formation – a 4-3-3. 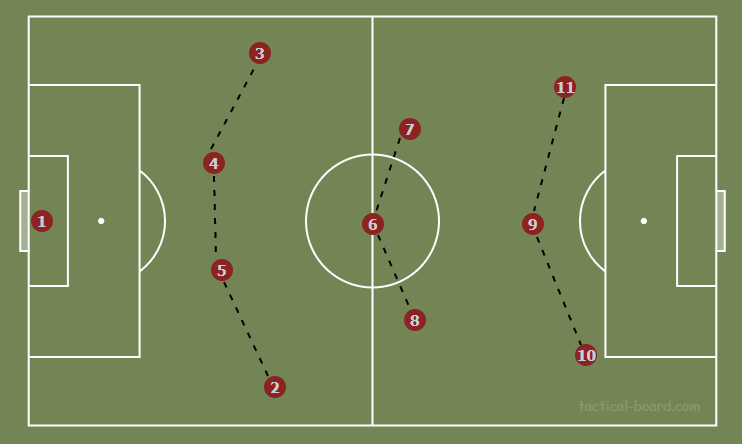 Gonzalez uses the 4-3-3 effectively, using compact passing networks to maintain possession. Maintaining possession through frequent interchanging of passes has been an attribute that FC Dallas have moulded in themselves. The four-man setup at the back gives FC Dallas a firm foundation to build-up from the back and advance forward.

The 4-2-3-1 effectively forms a two-man line in front of the defence, covering the defence while helping to make the attacking transition effective. Luchi Gonzalez uses this to increase the passing option towards the middle of the pitch, with short and frequent one and two touch passes. He regularly switches to this formation by bringing on an extra midfield player in place of the winger. The double-pivot generally consisted of Bryan Acosta and Brandon Servania in 2019 whereas he used the young Tenner Tessmann and Thiago Santos this season. FC Dallas have played much of their 2020 pre-season and the league games with a 4-2-3-1 lately. 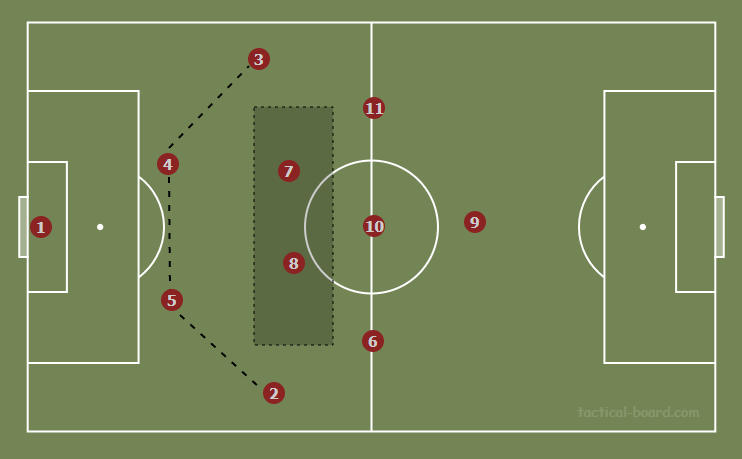 Not only does this switch help Luchi Gonzalez’s side defend, but also helps to intensify their attacks. Gonzalez usually makes the switch in the second half, if he really feels he should. Otherwise, considering the dynamism they have with young players, Gonzalez has also used a 4-4-1-1 and a 5-3-2 on a few circumstances.

The ‘exciting’ build-up from the back

For a league that had no draws back in time, only slow build-ups can be termed uninteresting or even a time pass. However, Luchi Gonzalez has been able to supply a unique overview of this approach, by enabling quick interchanges of one-touch passes to advance from the back. For a formidable and reliable set-up, Luchi Gonzalez played a relatively constant backline throughout the season, aiming to increase the pass accuracy between the players that were supposed to be heroes in building from the back.

Ryan Hollingshead, the left-back, started 37 games under Gonzalez in the first season, most of any FC Dallas player, followed by centre-backs Matts Hedges and Reto Ziegler, who made 36 and 34 appearances in 2019. Similarly, Reggie Cannon and Bressan were the only right-backs that Luchi Gonzalez used. Luchi Gonzalez’s quest for a reliable combination at the back worked out well, as things started to go FC Dallas’ way after a few shivers initially.

The back-four consistently increased in their passing accuracy, interchanging the spaces and occupying the spaces on receiving passes within each other. Similarly, while on the build-up, the back four looked to maintain the shape intact, always leaving passing options to avoid losing the ball. 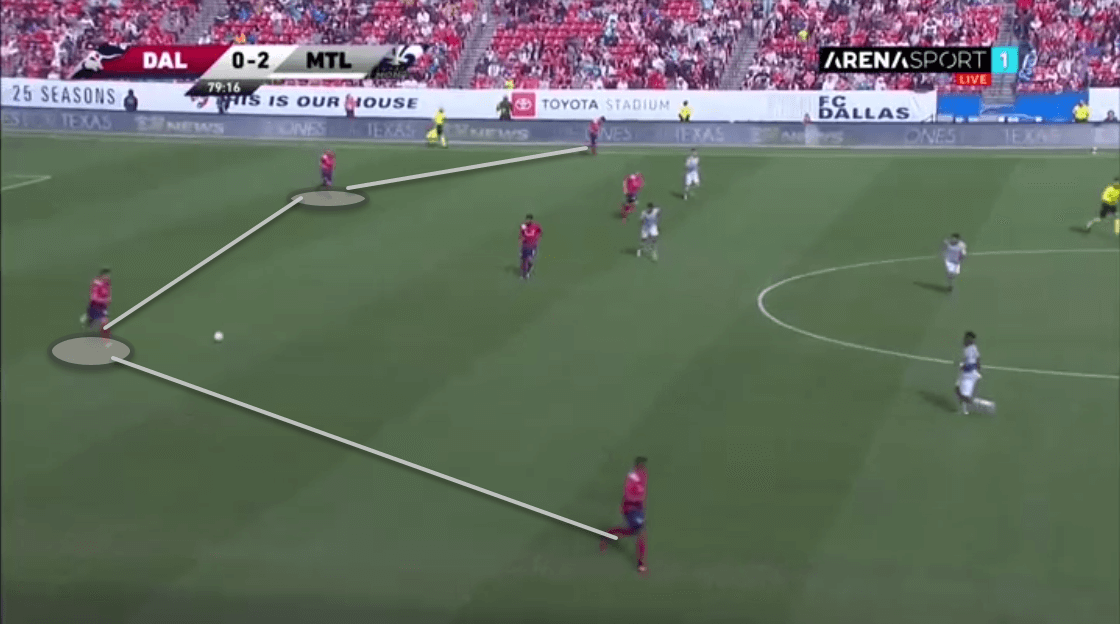 While in a 4-3-3, Bryan Acosta, Jesús Ferreira and Paxton Pomykal received the ball, advanced it using interchanging short passes forward. However, Luchi Gonzalez also made the side opt for long diagonal balls occasionally after the build-up, to create as many opportunities as they could. That is, the side also looked for spaces to exploit, rather than rigidly forcing conventional passes. 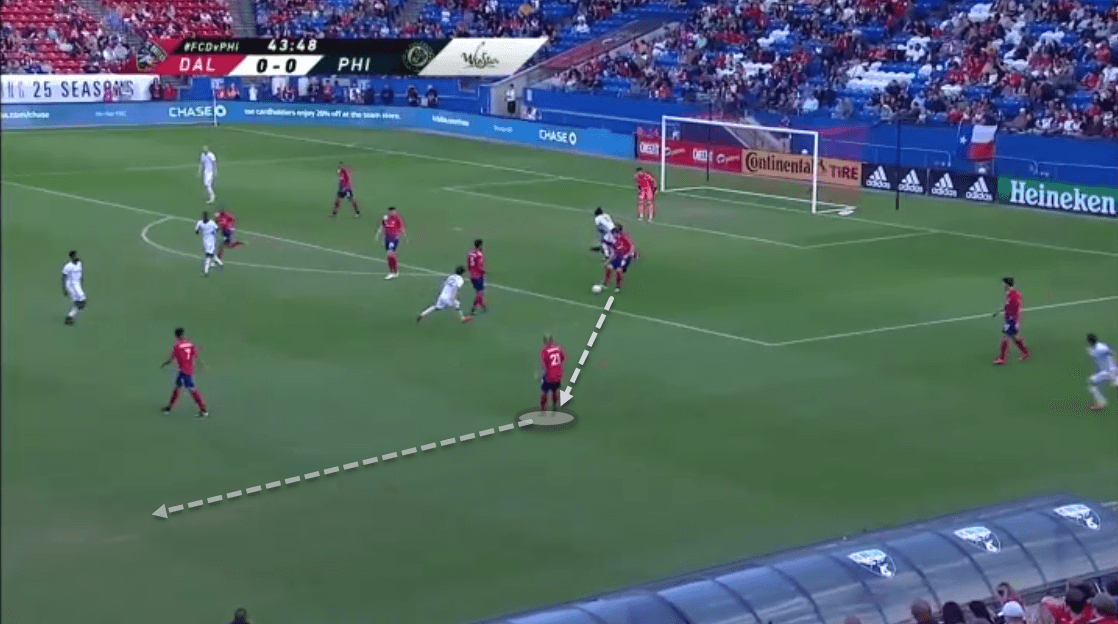 The move typically turned out to be exciting because of the pace that FC Dallas have in their wide attackers. Michael Barrios and Santiago Mosquera frequently made wider runs, and cut back or crossed to feed the striker. 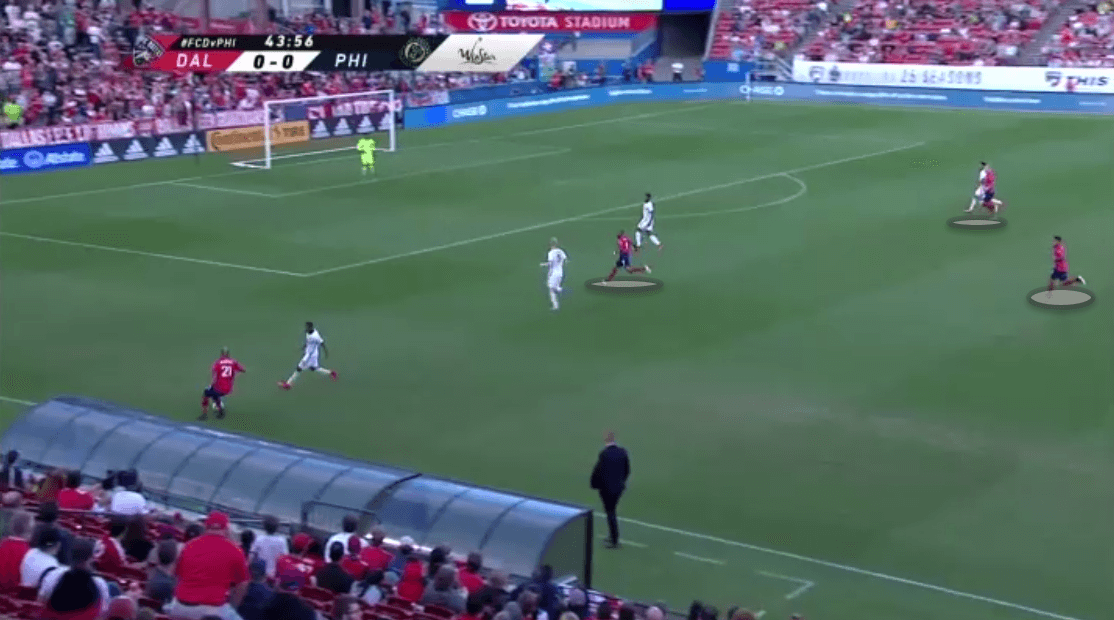 Barrios after a run out wide, as a result of the centre-back spotting him to utilise his pace. The situation creates a man advantage, with the centre-forward drawing two players.

This very approach of going for an all-out attack with a build-up made it ‘exciting’ to watch, full of pace and effectiveness. The side averaged a healthy goal scoring rate, despite losing Maximiliano Urruti before the season started.

High counter-press and love for the ball

The FC Dallas squad had a hard time coping with a possession-based approach initially but pieces started falling into place towards the end of the pre-season itself. Coming from a coach that liked to deal things physically and get involved in a lot of defending while sitting back to counter, the FC Dallas side left all the pragmatism aside and started to crave for the ball with Gonzalez’s plans.

One of the key traits that almost every young manager nowadays seems to bring is counter-pressing. Whether it is by using wide players Ryan Hollingshead and Reggie Cannon to cut support their respective midfielders in a 4-4-3 for the press or by using the two-man shield to create a 2v1 in a 4-2-3-1, FC Dallas went higher up the pitch out of possession and tried to win the second balls as far as possible to win the ball.

The goal here is common, Gonzalez’s team tries to win the ball via forcing errors attained by maintaining chunks of numerical superiority. Whether that’s an advanced player dropping down to provide the 2v1 or a defensive player helping the advanced one out for the press, FC Dallas look to go for the ball and reclaim, instead of turn back and defend philosophy. 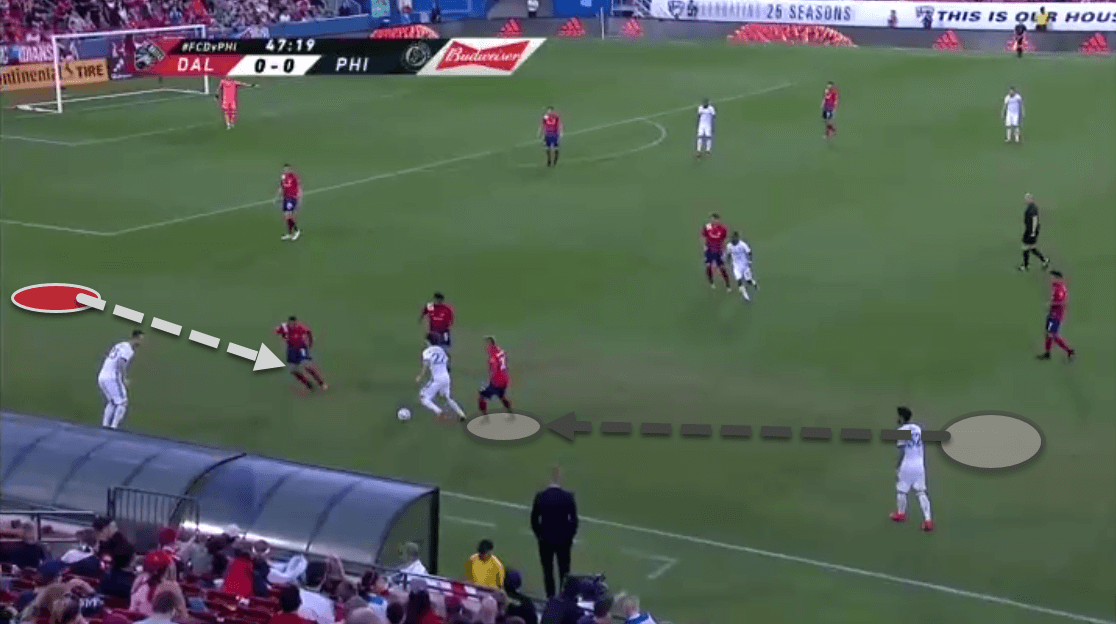 Moving higher and limiting the opposition to its own half have a unique advantage to FC Dallas. FC Dallas were able to pull some amazing comebacks last season, as a result of being able to make the opposition run for the ball throughout the game and attack against the tired legs. A classic example that FC Dallas fans would remember forever would be the match against Montreal Impact, where FC Dallas managed to pull off a 3-3 draw, overturning a 3-0 deficit. Montreal Impact made mistakes out of fatigue and Luchi Gonzalez made the right substitution, Zdeněk Ondrášek to snatch a point.

Similarly, FC Dallas’ ability to retain the ball and burst against the frustrated opposition was on display this season against Montreal Impact, too, which can become evident by the figure below: 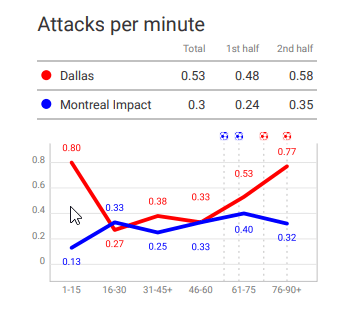 After trailing by two goals, FC Dallas put their attacking boots on, making progressive moves to register five shots in the final 20 minutes, of which three on-target shots saw them score two. The unmatched intensity got the better of former Arsenal star Thierry Henry managed Montreal Impact and were lucky to get a point ultimately.

Luchi Gonzalez has not been that adventurous when it comes to trying out defensive duties like he has done with his attacking department. That is to say, to provide his side much-needed defensive rigidity to be able to comfortably play out from the back, he has trusted a few players to do the job for him. Hence, FC Dallas have been leaking goals, yet getting better session by session due to the consistency. Except for the ‘switch-off’ period, where FC Dallas went six games without a win because of injury issues and national team call-ups, they’ve done better than what everyone expected of them.

Imposing a strict man-marking system while pressing and inviting another player to win the ball, FC Dallas maintain the system in defence, too. Hedges and Ziegler, the centre-backs, both possess aerial prowess and are able to deal with crosses pretty often. Similarly, they are able to maintain the lines while defending, enabling others to man-mark while covering the space as per the ball’s location. 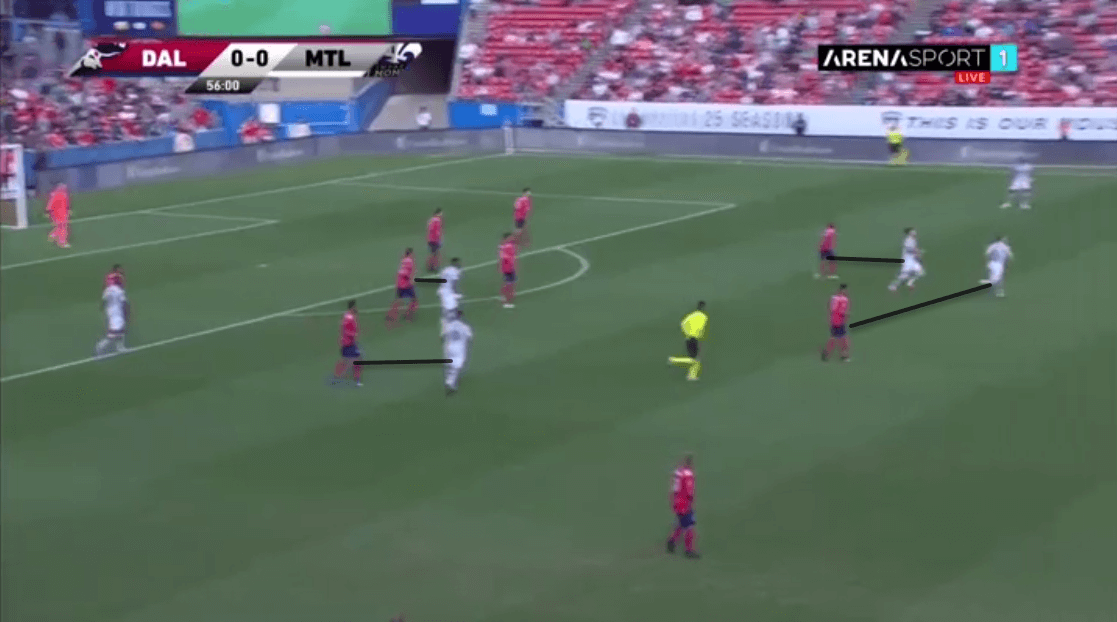 In addition to the strict man-marking system, FC Dallas like to get the players in to defend in numbers for an opposition counter-attack. Typically, the wide midfielders are seen covering up for the wide players, while the fullbacks are assigned to cover up the inner run-making players. In this way, the centre-backs get support from their corresponding full-backs to defend numerically when the attack progresses from wider side. 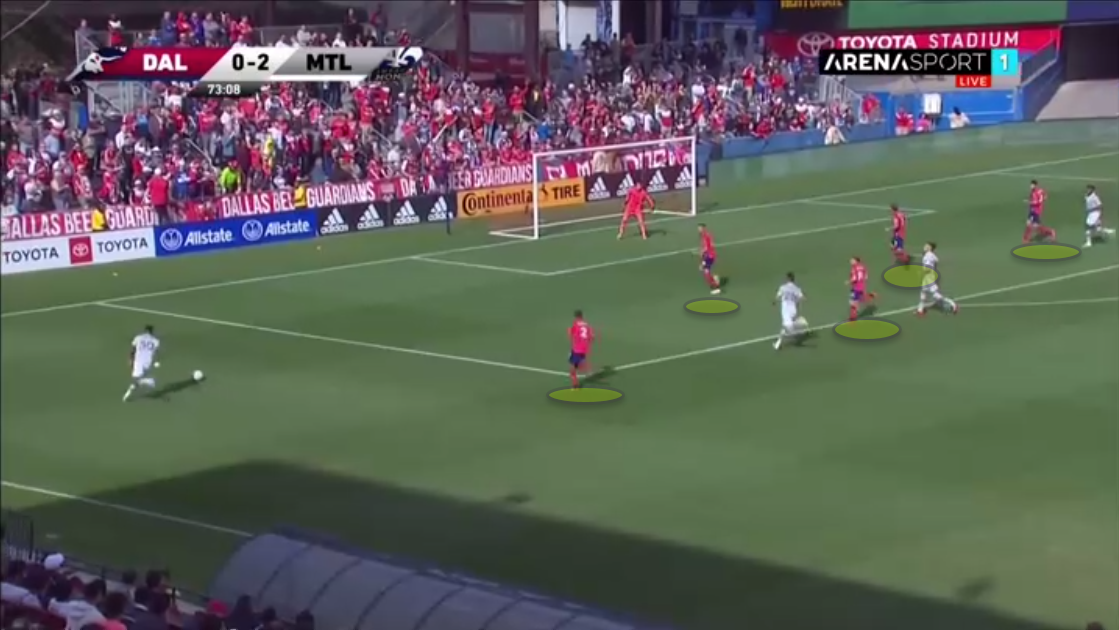 Similarly, when the side opts to a 4-2-3-1, as explained, Luchi Gonzalez’s side forms two layers of defence, maintaining numerical superiority while pressing and winning the ball back to transit as quickly as possible. In this way, FC Dallas also manage to work against counters progressing centrally with a layered-defensive setup. 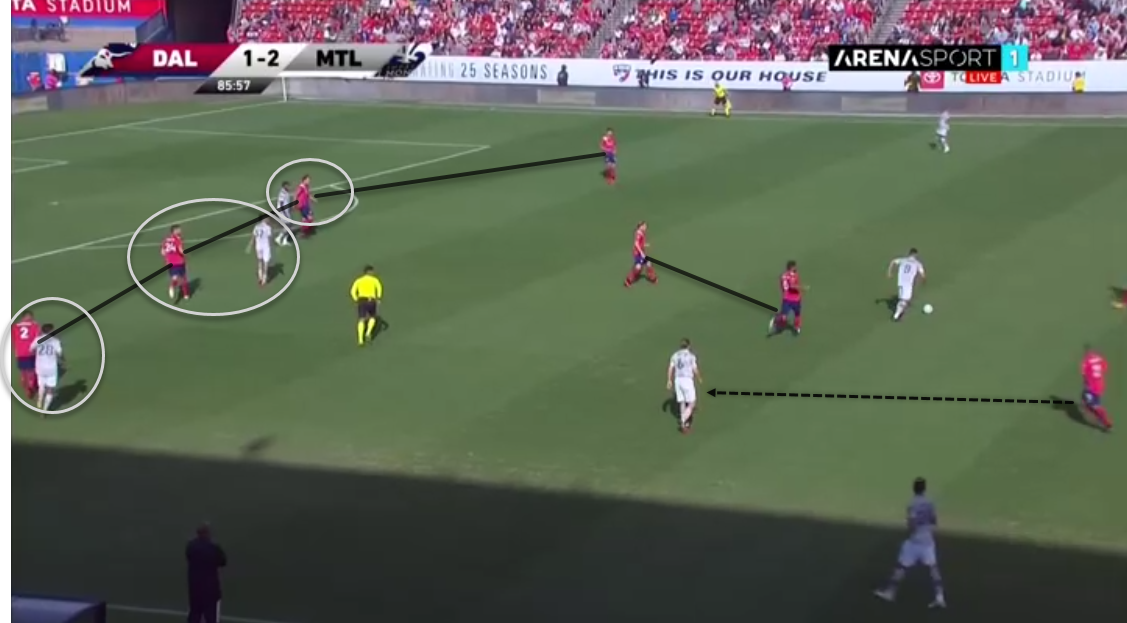 As the above picture displays, Dallas are seen maintaining a layer defending against the counter. However, in the instance, Dallas were able to slow down the counter via strict man-marking along with maintaining their shape. Also, the approaching player towards the left is well-covered by the wide left full-back, which limits the opponents’ efforts to switch play and move forward.
This also comes with the fact that Bressan, typically a centre-back, is deployed whenever they face an attacking side, to complete a five-man set up. The ‘keeper, Jesse Gonzalez is also involved whenever the side tends to press deep, with the keeper being noticeably good with his feet.

Maximiliano Urruti had been a machine for FC Dallas, with the Argentinian bagging the top scorer’s spot for FC Dallas for three consecutive seasons. However, Urruti left for Montreal Impact just as Luchi Gonzalez was setting off for his job at FC Dallas. Everyone expected Gonzalez’s side to go on a goal drought but things seemed to be just the opposite. With some exceptional tactical adaptations and man management, Luchi Gonzalez has enjoyed regular goal scoring scenes at the Toyota Stadium. The team has been able to pull off the big margin, convincing victories with various scorers on the board.

Michael Barrios is a perfect example of a player that has tactically evolved as a player under Gonzalez. The Colombian, known as a winger that crossed the ball frequently and ran to beat defenders is now deployed in a rather playmaking forward’s role, with frequent link-ups with the corresponding midfielder and attackers to create chances. Luchi Gonzalez hasn’t cancelled him out completely as a run maker but has evolved him as a player, moulding him into his system. 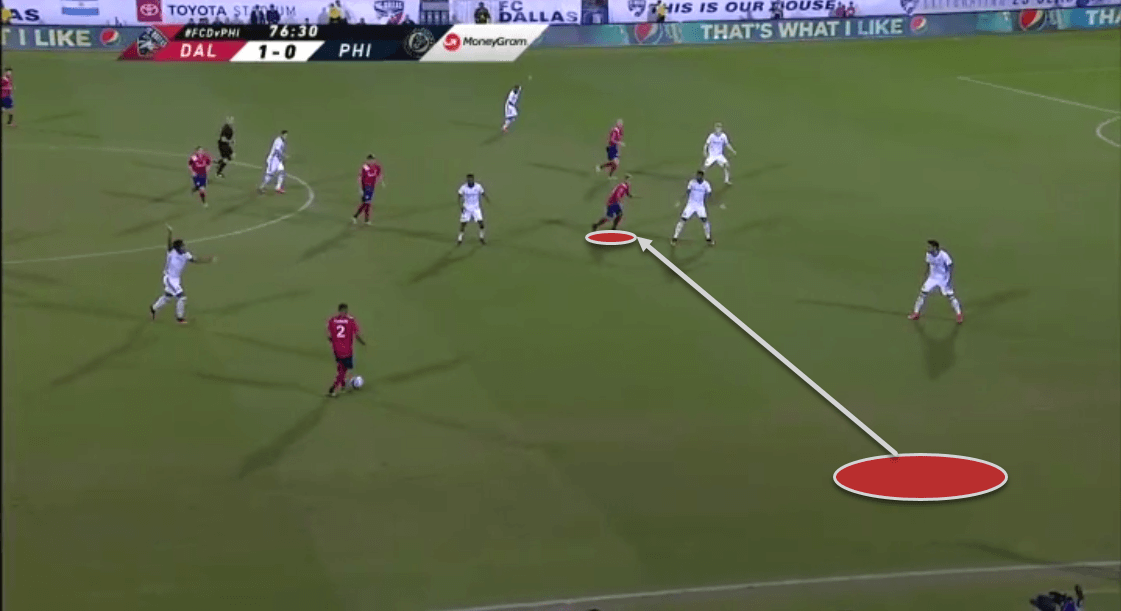 The right-winger, generally deployed in a midfield set up while switching up to a 4-2-3-1, is seen playing a central role to assist the fellow striker, drawing man away from him, making blind side runs to get rid of his marker to contribute to fellow striking partner. As a result, Barrios assisted 16 throughout the season, FC Dallas’ highest in terms of assists.

Similarly, Luchi Gonzalez matches the overall motive that the FC Dallas side carries in player development – being reliant and signing as many homegrown players as possible. This goes without saying, some youngsters, including Tanner Tessmann, are expected to grow well under his experience and management skills. Similarly, FC Dallas became one of the youngest sides to ever feature in the play-offs, before crashing out to Seattle Sounders who went on to lift the title eventually.

While Europe is on a roll of witnessing the evolution of young managers, Luchi Gonzalez brings a fresh, competitive and quality brand of football to FC Dallas. The tactics of playing with the ball, FC Dallas fans certainly have loved the man and even named his brand of football ‘Luchiball’. Landing an underdog FC Dallas side into the play-offs was commendable and only time will tell what Gonzalez has in his passion-driven mind for this looked-after Dallas side once football resumes in North America.

Let’s do it, as Luchi says!