With both teams desperate for a win, the stakes in this MLS 401 Derby between Montreal Impact and Toronto FC couldn’t have been higher. Montreal were searching for their first win in four games, while Toronto had only managed to find one win in their previous 12.

The first half of the game was very slow, with both teams staying compact defensively and failing to utilize the wide areas during their attacks. The game finished Montreal Impact 0 – 2 Toronto FC, with Alejandro Pozuelo and Jozy Altidore scoring for the Reds. We will explore the tactics that won this game in this MLS tactical analysis.

With international competitions coming to an end, Greg Vanney had full access to his three designated players. Jozy Altidore, Michael Bradley, and Alejandro Pozuelo all started the match. Altidore’s return to the team allowed Pozuelo to return solely to a playmaker position in this game.

Montreal Impact’s head coach, Rémi Garde, reverted to a back four in this match. In recent games the French manager had set up his team with three at the back, utilising Bacary Sagna and Jukka Raitala as wingbacks. Garde’s formation change was likely due to his tendency to pick his strongest eleven players rather than tactics. 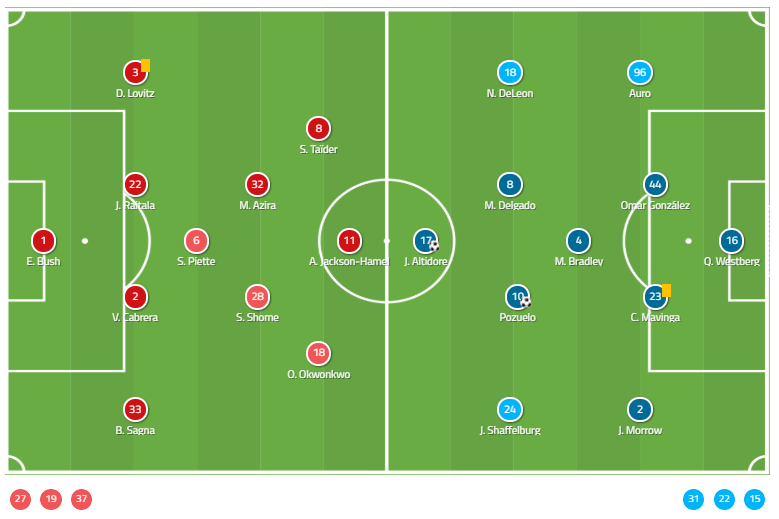 There weren’t many goal scoring chances in the first half for either team, but Toronto FC looked most convincing on the counter-attack. On many occasions, Toronto FC pressed Montreal Impact high up the field, forcing a turnover.

Toronto FC’s best chances in the first half came after winning the ball in Montreal Impact’s half. In the following example, we can see Alejandro Pozuelo’s cross headed out by Jukka Raitala. Piette retrieves the ball for Montreal but instantly meets Toronto FC’s high press. Pozuelo wins the ball and has a shot at goal. This is a similar position from where he scores later in the match.

Alejandro Pozuelo eventually broke the deadlock in the 61st minute after Toronto FC once again won the ball in Montreal Impact’s half. In the following images, we can see Cabrera play a ball into Azira who appears to have space in the midfield. As the pass comes in, Delgado instantly closes Azira down.

Azira plays a first time ball forward that Michael Bradley intercepts. This sparks a counter-attack beginning in Montreal Impact’s half. Pozuelo drives into the free space and scores from just outside the 18-yard box. Winning the ball high up the field allows Toronto FC to take advantage of a 3v2 attacking scenario.

Throughout the first half, Montreal Impact posed no threat to Westburg’s net. The Impact only had one shot on target in the first half after they intercepted Michael Bradley’s attempt to play out the back. Toronto’s press resulted in Montreal resorting to long balls over the top in an attempt to bypass the midfield. Many of these attempts were unsuccessful, as the passes were either hit far too long or cut out by Toronto’s defenders.

The lack of width in Montreal’s attack limited their ability to beat Toronto FC’s press during the build-up. Theis lack of width could have been a result of Rémi Garde’s choice to revert to a back four instead of a back five. With four at the back, Garde’s full-backs were unable to commit as far forward as they would have been able to in a back five.

It wasn’t until Clément Bayiha’s was introduced in the 60th minute that Montreal Impact started creating chances. Bayiha was able to find space in wide areas and penetrate Toronto FC on the dribble.

Toronto FC go five at the back

A few minutes after Toronto FC went up through Pozuelo, the game was put on hold due to extreme weather conditions. Toronto seemed to be in complete control during the early stages of the second half, but after the long weather break, Montreal came out much more convincingly.

Zavaleta came on as the right centre-back in a back five, with debutant Gonzalez acting as the middle centre-back and Mavinga on the left. Justin Morrow maintained his position as left-back, but could now commit himself forward more freely. Richie Laryea, who had replaced Auro a few minutes earlier, was at right-back.

In this passage of play, we can see how Toronto FC deal with the vulnerabilities in their defensive setup. As Morrow steps to close down Bacary Sagna, Taïder makes a penetrating run into space behind Morrow. Taïder’s run forces Mavinga to step out of position to close him down.

Luckily for Toronto, they manage to maintain coverage in the middle through the likes of Michael Bradley. Michael Bradley provided support centrally, usually when the likes of Laryea and Morrow stepped out of position to defend higher out wide. In the above sequence, Bradley cut out Taïder’s cross at the near post. We can see the American captain’s defensive positioning in the image below.

This shape helped Toronto FC maintain defensive solidity while allowing Laryea and Morrow to continue helping offensively. In fact, Morrow’s position was so high that he almost had an opportunity to put a Montreal comeback out of reach in the 85th minute. As Jozy Altidore drifted wide, Morrow attacked the gap in Montreal’s backline. We can see this scenario in the image below.

Unfortunately for Morrow, he was unable to convert the chance, despite finding himself 1v1 with Montreal Impact’s goalkeeper, Evan Bush.

With both teams in dire need of a win, this game was perfectly poised. Despite this, the first half was relatively dull, both tactically and in terms of entertainment. A lengthy weather break in the second half not only brought new life to the game but inspired tactical changes from both Rémi Garde and Greg Vanney. It was, however, Vanney who won the tactical battle, as we saw in this analysis, with goals from both Alejandro Pozuelo and Jozy Altidore.

Montreal will search for redemption against Columbus Crew next match week. The Crew sit in joint last place in the league, with MLS debutants FC Cincinnati. Toronto FC, on the other hand, face NY Red Bulls who sit just above them in the MLS Eastern Conference.