With the United States Women’s National Team (USWNT) set to return to their domestic clubs over the next few weeks, the attention now turns towards the hotly contested National Women’s Soccer League. Some of the stars of the USWNT will be eagerly anticipated by their clubs but none more than Portland Thorns. They welcome back Lindsey Horan and Tobin Heath, two important members of the World Cup-winning squad. While Horan was relegated to substitute appearances, Heath was an integral part of the United States attacking line up.

Alongside the ruthless Alex Morgan and outspoken Megan Rapinoe, Heath formed part of the attacking trident that scored 12 goals between them. Even if the Portland Thorns winger failed to find the back of the net, it was her overall performance that enabled her teammates to perform so effectively.

This tactical analysis will look to decipher the strengths and attributes that Tobin Heath brings to her team. This will also give us an indication of what we can expect from her upon her return to Portland.

Tobin Heath is a 31-year-old right-winger that plies her trade for the Portland Thorns. The American winger has been a mainstay of the USWNT for a few years now having established herself after making her debut in 2008.

Standing at 5’6, Heath uses her height to drive forwards making mazy runs down the right flank. Heath’s style of play may seem arbitrary, however, her combination of speed, positioning and dribbling all contribute towards her effectiveness in the final third. With an impressive defensive drive, the Portland Thorns winger can be considered a managers dream. This scout report will explain these qualities in finer detail.

Tactical analysis – Off the ball movement

Heath’s most impressive attribute is her ability to create space using her positioning and dribbling. Whether she dribbles from deep or navigates herself through one v one situations, Heath manages to get the better of her marker. A player in her position looks to stretch the opposition and isolate the full-back or find pockets of space to provide a wide passing option. This allows the midfield runners to make runs in between the centre-back and full-back to capitalise on the space created by Heath.

The USWNT play with a dynamic front three with Rapinoe drifting in from the wide areas making quick runs into the area benefiting from Heath’s crosses. Morgan’s presence distracts the centre-backs paving a way clear for Rapinoe, Heath or Rose Lavelle to latch onto.

The sequence of play above highlights this quality. As Morgan drifts into the central areas in possession, Heath understands that Amel Majri, the left-back, is out of position and races to run in behind. Heath understands that Wendie Renard isn’t the quickest defender and leaves her with a choice to make; push up and try to block Morgan’s pass or track Heath’s run. In the end, she does neither allowing Heath to latch onto the through ball. Meanwhile, both Rapinoe and Sam Mewis are afforded free runs into the area. Heath checks her cross and it trickles through to Rapinoe’s far sided run to score.

Her style of play suits a more direct, counter-attacking team but Heath has shown an intelligence when it comes to more complex attacking scenarios. Not only can Heath create space for her teammates with her direct running during counter-attacks but she is intelligent enough to slow down play. This opens up space by interchanging passes in smaller areas. The USWNT tend to rely on their fearsome front three for their goals so having the ability to do the off-the-ball work well is an added bonus.

As the graphics above highlight, Heath is in possession drawing two English defenders towards her creating space for Kelley O’Hara. She spins around looking for another passing option, giving O’Hara space to operate out wide. After full-back receives the pass, Heath darts forward to receive the interchange, sucking in both Demi Stokes and Keira Walsh. Knowing this, Heath expertly feints and allows the ball to be picked up the free Julie Ertz. Heath’s run has dragged the two English midfielders away allowing an unmarked Ertz to take a touch and shoot. Even though this did not result in a goal it showcased Heath’s intelligent play out of possession.

Heath’s average statistics in 2019 have been impressive so far, to say the least. An average of 7.42 dribbles per 90 with a 74.4% success rate has most definitely proven her effectiveness in possession. Her on the ball skills have been underrated with her quick dribbling ability. Heath always looks to find a way to the by-line to provide a cross for the onrushing attackers. A lot of the USWNT’s play runs through counter-attacks giving the likes of Heath and Rapinoe space to exploit.

Heath may not look like she’s in total control of the ball but that plays into her hands as defenders attempt to get stuck in but lose out as she slips her way through. As the graphics below show, Heath is in an isolated one v one situation with the Dutch defender. She manages to knock the ball past the defender and uses the unoccupied space to create a crossing opportunity. Notice the second defender coming across to cover but Heath manages to evade her efforts too. Heath can often be seen on the opposite flank when playing for Portland Thorns. The Jersey-born winger prefers drifting infield when playing on the left, combined with her directness, defenders find it difficult to contain Heath resulting in either a foul or passing opportunity. Defenders are unsure about who goes out to press, the centre-back or full-back? This confusion can result in unnecessary fouling giving away needless free-kicks. 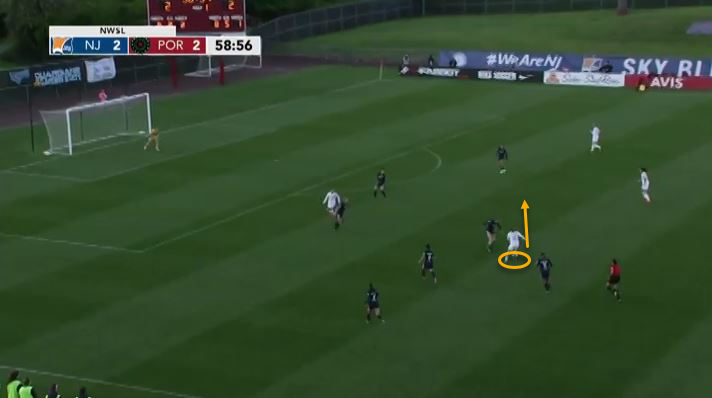 Faced with one more defender, Heath forces the foul out of the Sky Blue player [Credit: Wyscout]As the graphics above show, Heath looks to be surrounded by three Sky Blue defenders as she looks to drift inwards towards goal. After evading them, she looks to tackle one more hurdle by taking on the last defender. Using quick feet, Heath manages to get ahead of her Sky Blue marker and races through only for her to be tackled winning a free-kick in a dangerous position.

What is surprising though is Heath’s low conversion rate. With a mere 3.05 crosses per 90 with a 48.6% success rate, you would expect more from a winger of her quality. It begs the question, what stops Heath from putting in more crosses into the area? She managed 4.12 touches in the box and 3.05 progressive runs per 90, so she isn’t limited by her ability to get into good positions. However, what does let her down is her decision-making in the final third.

Heath is often seen stationed in excellent positions but is dispossessed by not making the correct decision quick enough. We earlier talked about her strength in one v one situations, however, that seems more potent from a deeper position rather than around the penalty area.

One of Heath’s most impressive traits is her defensive work rate. The tactics for both the USWNT and Portland Thorns are similar with regards to wingers tracking back. Heath is often seen in her defensive third assisting her full-back in keeping the opposition winger quiet. The statistics reinforce her defensive willingness. Heath attempts 4.45 defensive duels per 90 even with a low success rate (27.8%). Her role isn’t to win tackles but rather pressure the opposition into making mistakes. Equally, she makes 4.95 recoveries in the opposition half per 90 with a 66.7% win percentage, making her a valuable asset allowing O’Hara the freedom to attack.

Heath’s aggressiveness plays a major part in her defensive duties through her pressing. The high flying full-backs compliment her high work rate and together the wing combination shuts down many potent attacking threats. As the sequence of play below shows, the two American players close down Demi Stokes with Walsh in support. Heath recognises the danger and moves to press the English midfielder not allowing her time to progress the ball forward. The Portland Thorns wingers’ pressure is enough to win back possession and potentially put the United States in a counter-attacking situation.

At the age of 31, Tobin Heath is one of the experienced members of the group. Becoming a senior figure in the dressing room for the likes of Lavelle and Mallory Pugh will be important in their development. They will lead the new contingent at the next World Cup with Carli Lloyd, Rapinoe, Heath and Morgan all in their mid to late thirties.

The analysis has been quite conclusive. Heath’s dogged style and willingness to do the dirty work will increase the longevity of her career as well set an example for these younger players. She has proven yet again that pure goal scoring isn’t a necessity having played a slightly different role altogether allowing Rapinoe and Morgan to shoulder the goalscoring burden. Having won her second World Cup over the summer, she has accomplished what many dream and continues to prove her credentials.