What a great FIFA Women‘s World Cup it was this year in France. We saw thrilling matches, great performances by the players and in the end, the great favourites, the USA, defending the title and winning the Women’s World Cup for the fourth time.

Everyone was talking about the two stars of the team Megan Rapinoe and Alex Morgan. Especially the winger Rapinoe had a great tournament with her six goals in five appearances. However, the defensive midfielder Julie Ertz had some great impact which isn’t obvious at first glance. The 27-years-old played most of the time as the only defensive midfielder and occasionally as a centre-back.

This tactical analysis will examine Ertz’s defensive as well as offensive abilities and her importance to Jill Ellis’ team.

Their road to the title

The United State were in group F together with Chile, Thailand and Sweden. It was clear that the U.S. would go through to the round of the last 16 as the winner of this group. Furthermore, everyone expected Sweden to be in second place after the third matchday. This was mostly expected because it was the first time the Chilean national team even qualified for a FIFA women’s world cup and only the second time since 2015 for Thailand.

Ellis’ team faced Thailand on the first matchday in Reims and everyone expected them to win this game easily. And alas, the USWNT won 13-0 in the most one-sided match in Women’s World Cup history. Just five days later they bet the Chilean national team 3-0 in France’s capital city and so they were already qualified for the round of the last 16. Since Sweden also won their first two matches in group F, the clash between Ellis’ team and the Scandinavians decided who would be the winner of their group.

However, the USA were able to take away a 2-0 victory and so they won their group. In the round of the last 16, they faced Spain. The USWNT were once more the clear favourite to go through to the quarter-finals. But the Spanish national team played well and issued a challenge to the United States who needed two penalties to secure a 2-1 win.

After that, they faced France, the hosts of this year’s Women’s World Cup, in the quarter-finals. Some people said that the winner of this match will go on and win this World Cup since these two teams were the greatest favourites. Ellis’ team was once more able to win 2-1 and went through to the semi-finals due to two goals by Rapinoe.

They faced the English national team of coach Phil Neville in the semi-finals. Morgan and Christen Press both scored to win 2-1 for the third time in a row. Considering this, it was official that the United States would face the Netherlands in the final of this year’s Women’s World Cup in Lyon.

Rapinoe and Rose Lavelle scored the goals for the U.S. in the final and the Netherlands weren’t able to retaliate and so the game ended 2-0 and Ellis’ team was crowned Women’s World Cup champion for the fourth time in the history of this tournament.

Ertz was born as Julie Johnston in 1992 in Mesa, Arizona. She married Zach Ertz in 2017 and since then her surname is Ertz.

Ertz attended Santa Clara University, where she majored in communications and played for the Santa Clara Broncos women’s soccer team. Overall, Ertz has made 79 appearances and scored 31 goals with the Broncos between 2010 and 2013.

In January 2014, she was selected third overall in the first round of the 2014 NWSL College Draft by the Chicago Red Stars. Since then she played 72 games for the Red Stars and scored six goals.

Furthermore, Ertz made her first appearance for the national team in February 2013 against Scotland. Since then she made 88 appearances for the USWNT and scored 19 goals. In addition, this year’s title was for her the second because she was also part of the squad which won the Women’s World Cup in 2015 in Canada.

Ellis set up her team in a 4-3-3 formation throughout the tournament in France. Ertz played in six out of the seven games and only didn’t play against Sweden. In the remaining games, she always played as the central and most defensive one of the three midfielders except the first game against Thailand in which she played as a centre-back.

Ertz was very important for the tactics of the United States. When they tried to build up from the back as later explained in this analysis, she was the deepest midfielder and supported the two centre-backs, usually Becky Sauerbrunn and Abby Dahlkemper. She was always positioned very centrally to provide a passing option and then either laid the ball off or looked for a forward pass. 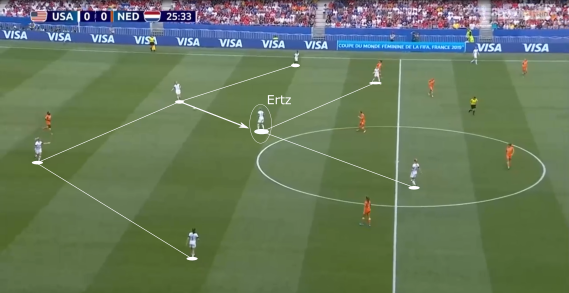 However, the 27-years-old defensive midfielder was also very important when the opposition was in possession. The United States transformed into a kind of a 4-1-4-1 because the two wingers were positioned deeper. Ertz was then the single player between the two banks of four. Her main task was then to occupy this important space in front of the back four and in addition, she tried to cut off passing lanes for the opposition. 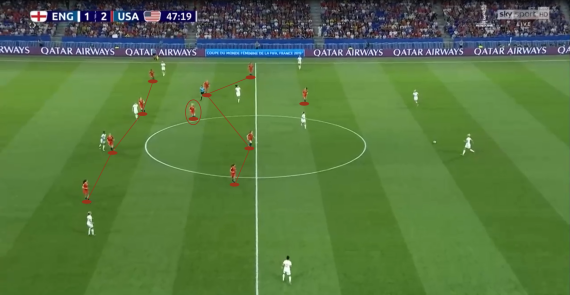 In some situations, she dropped between the two centre-backs and so their formation turned into a 5-4-1. They mostly did this in crucial moments like the last 15 minutes against France in the quarter-finals.

However, she usually stayed in front of the defenders as long as the USA sat back and waited for the opposition. But they also often used an aggressive and high pressing, especially in the first minutes of a game. In these situations, Ertz also stepped out of her usual zone and put pressure on an opponent. However, in those moments, none of the two other central midfielders occupied the space in front of the back four. Instead, they stayed in their position and so there was a lot of free space in the centre for the opposition. In the images below, France used exactly that space.

Ertz’s importance to the build-up of the USA is unquestionable. She came deep to collect the ball to then either find one of the two central midfielders or someone on the wing. She played, on average, 32.81 passes per game which isn’t an incredibly high value but with a success rate of 77%, she showed that she’s able to keep her team in possession of the ball.

She always tried to get out of the cover shadows of her opponents to provide a passing option. Ertz isn’t as pressing resistant as other players on her level, but she knows that. In light of this, she tries to pass the ball as soon as possible and so her opponents can’t put pressure on her. In the image below, she receives a pass and it would be the perfect situation for the opponents to press her. However, Ertz notices that and finds her teammate on the wing with a first touch pass to release the pressure. 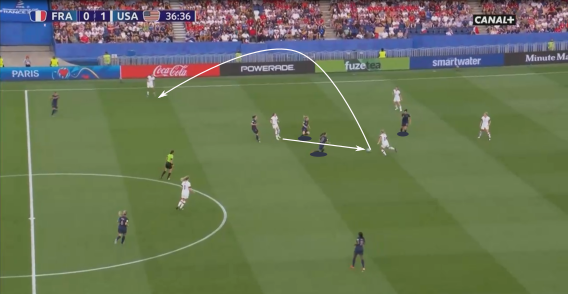 Furthermore, she often told her teammates how to progress forward and showed them their next passing option. In these situations, you can clearly see her experience. In the images below, notice a typical sequence of the build-up of the USWNT. Firstly, she plays a simple pass to the right-back Kelley O’Hara and immediately gets into a new position to be able to receive the ball again. O’Hara passes the ball to her and Ertz plays it with the first touch back to avoid a pressing opportunity for France. After that, she tells her right-back to pass the ball to Crystal Dunn who has a lot of space. 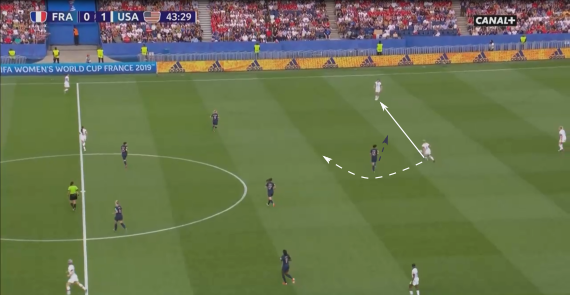 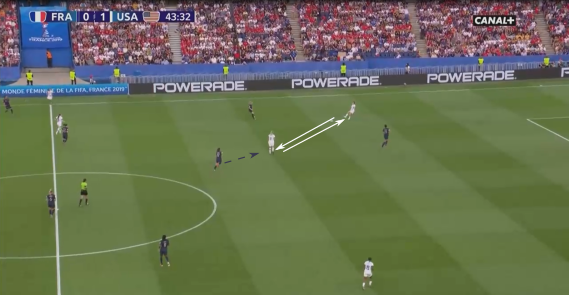 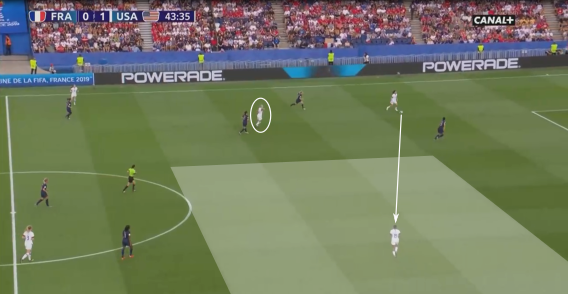 As soon as they reached the final third, she positioned herself deep and only the two centre-backs positioned themselves deeper than her. This positioning had two reasons. Firstly, in that position, her teammates always had an option to pass the ball back and Ertz could easily switch the side because the opponents were too far away to put pressure on her. Secondly, the defensive midfielder was in the perfect position to stop counter-attacks of the opposition.

When she received a pass in these situations, she mostly just switched the side. Even though these passes weren’t the most spectacular ones, they were extremely effective because they kept the opposition moving and made them tired. 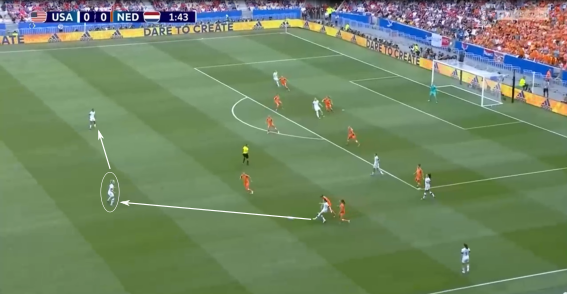 As already explained, this position also helped her to stop counter-attacks and intercept passes respectively. Intercepting is something that Ertz is especially good at as we will see later. In the shot below she is able to retain possession for her team due to her good positioning.

One of Ertz’s greatest strengths is really her anticipation which she uses to either make a successful tackle or intercept a pass. During this Women’s World Cup, on average, she made 9.47 recoveries and 4.39 interceptions per 90 minutes. These actions, as well as almost every other defensive action, seemed so easy due to her good anticipation and positioning. 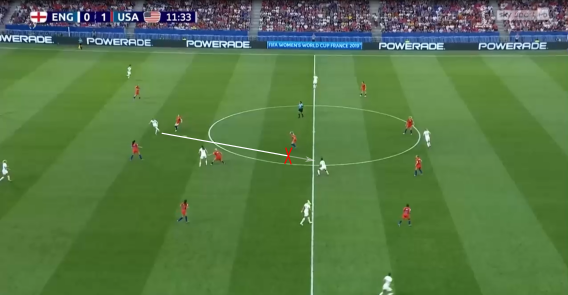 However, she also has got the quality to make tackles and sliding tackles. In the example below, she is the last one who could stop Eugénie Le Somme and does it with a great sliding tackle. 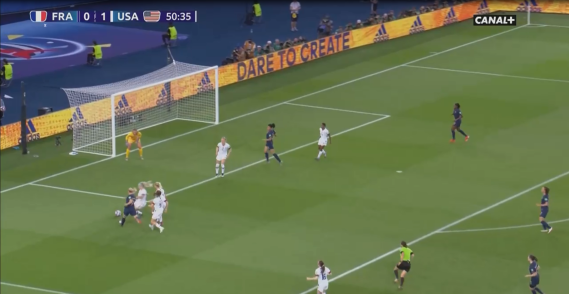 As this scout report showed, she’s a real all-rounder which is important for a midfielder. Furthermore, Ertz was one of the most important players for her national team during this tournament and one of the key factors for their second Women’s World Cup win in a row.

Even though her style of play is not most spectacular, it’s very effective and important for her team. Since she’s just 27 years old, this was surely not her last World Cup and there’s still more to come.