One of the most exciting fixtures in MLS from last week was the New York derby. Therefore, the common expectation of this game in the Big Apple was to fold out a highly interesting battle between the two rival teams of New York Red Bulls and New York City FC.

New York Red Bulls started the season badly due to several reasons, like slightly disappointing playoffs last season, heavy schedule or missing important players. Now they are getting better but still have a long way to go. In the previous game, they drew with Atlanta United (3-3).

Meanwhile, New York City FC had a long unbeaten streak (12 games) until they lost against Portland Timbers (1-0). Thus they must have come to this clash to get back on the right path of winning against their rivals. 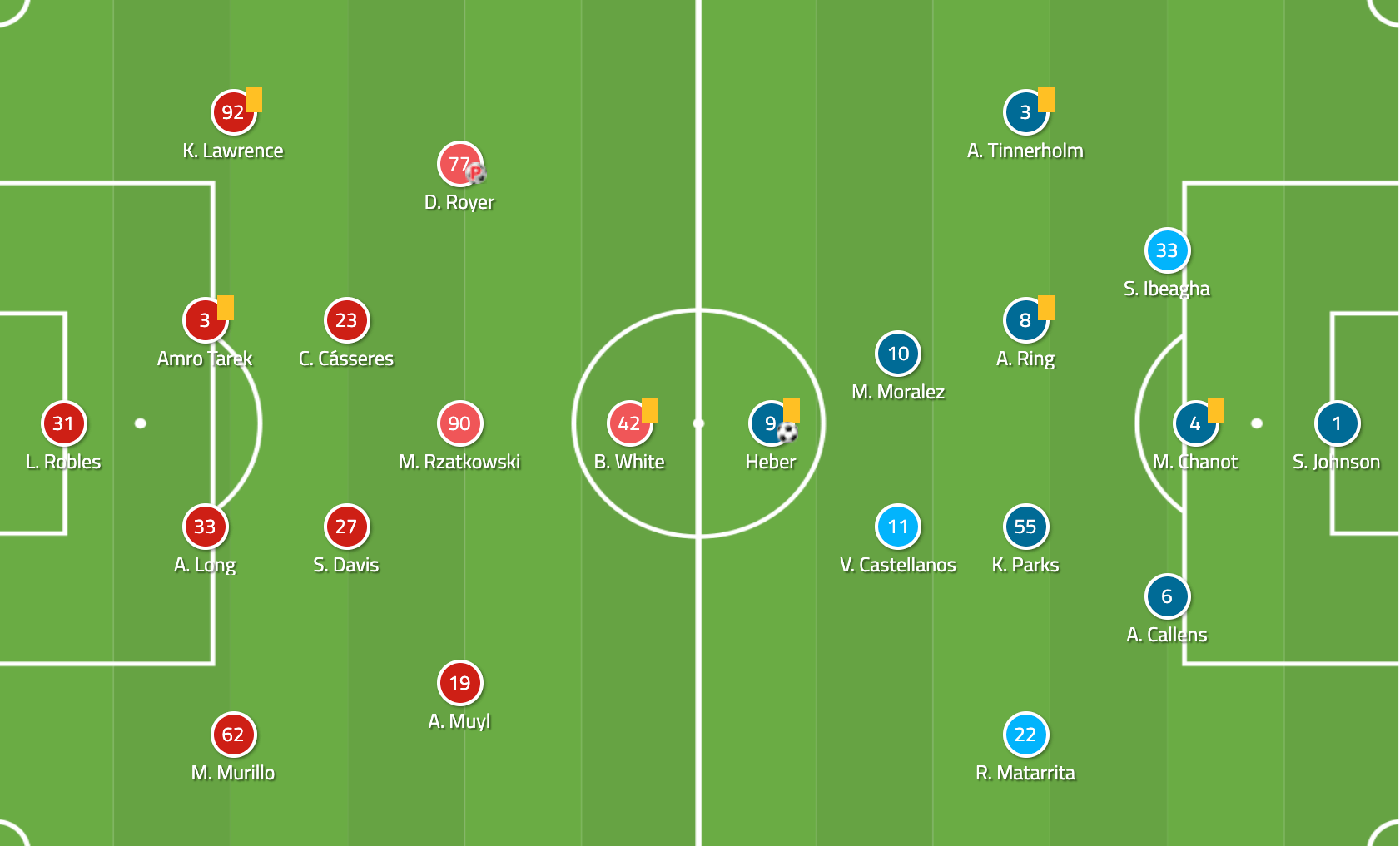 The home side formed their well-known 4-2-3-1 shape with the usual attacking four of White, Rzatkowski, Royer, Muyl. Thus Gamarra only got a place on the bench and Marc Rzatkowski replaced him in the #10 space. This could mean NYRB’s starting lineup was a slightly more cautious setup. In the midfield, the duo Davis-Cásseres played, exactly as they did in the previous game. Furthermore, Aaron Long returned to the middle of the defence to pair up with Amro Tarek. Michael Amir Murillo also returned to the right-back position, replacing Kyle Duncan.

On the other hand, Domènec Torrent employed Valentín Castellanos next to Héber Araujo dos Santos and Maximiliano Moralez in behind them as a connection between the team’s departments. Thus the formation this time was a 3-4-1-2 structure in spite of the lineup image above. Probably, the idea behind this structure was to create enough attacking presence up front for the counter-attacks. The close positioning of Héber, Castellanos and Moralez aimed to help the counter-attacks with quick passes.

The game started intensely as the home side tried to dominate from the beginning. Chris Armas asked his team to press high up the pitch to disrupt the opponent’s possession phase. They even pressed the opponent’s throw-ins to win the ball back quickly. In the goal kick situations, Davis pushed up to the same line as Rzatkowski, and both marked the NYCFC’s midfielders. The wingers positioned narrow, around the half-spaces, thus they established a 4-1-4-1 shape which could match the guests’ midfield. In this, Cásseres role was to cover the space between the lines as a holding midfielder. However, NYRB’s last line did not occupy that high thus the space between the lines was a bit too much (vertically not as compact).

Despite that, on paper, NYRB’s setup seemed an effective structure to negate the opponent’s progression, however, NYCFC showed ways early on to beat this. Here, for example, the goalkeeper passes immediately to Ronald Matarrita who was positioned behind the NYRB midfield line next to the touchline. Although the winger quickly shifted there, Matarrita still could play the ball forward due to the NYRB’s full-backs not occupying high, therefore, Murillo did not have access to NYCFC’s wing-backs.

However, Murillo occupied a bit higher than the centre-backs, therefore, it created a little space behind him that Héber tried to exploit. Thanks to the good defending by Long, this attack was eliminated.

During the offensive phase, the home side tended to use the lateral zones to get behind the opponent’s shape and cross the ball to the box for a header or shot. In order to break down the opposition defensive organisation, NYRB used overloads in the wings, mostly on the right wing.

Here is an occasion, where the wing was congested as both teams shifted there. It was a common pattern in New York Red Bulls’ play that both Davis and Cásseres moved out to the wing. Also, Rzatkowski often occupied in the flank to help the winger. Nevertheless, NYCFC were able to close down the wing as the wing-back (Matarrita) and Callens shifted out alongside with the midfielders. Thus it usually created a 5v4 situation for NYCFC. Although Murillo and Lawrence did not occupy high in general, in this situation, Murillo pushed up on the ball next to the touchline which could have created a numerically equal situation, but the nearby attacker tracked back with him thus NYCFC preserved the numerical superiority.

As the guests formed a five-man backline in defence and the midfielders shifted aggressively to the wing, Chris Armas’ side struggled with the tactics to breakthrough the wings.

One of the weapons that the guests used was the counter-attack. On those occasions, the attackers had an important role. The tactics were to use one of the front players as a target man then they could lay it off and turn to goal to threaten with a run. The ball was usually played to lateral zones after the layoff where they could progress and make a low cross to the box.

They could impose a decent threat to the New York Red Bulls’ goal, however, the goal occurred from a different situation where, mostly, the home side’s defensive errors allowed them to score. Nevertheless, this counter-attacking threat was enough to force back the home side and then NYCFC stayed up high to press the opponent’s throw-ins and win the ball back quickly. With this, NYCFC were able to change the basic dynamics of the game and create dominance on the ball. For example, in the first half, they had a 54% possession rate (and 56% overall) in spite of the early dominance of NYRB.

Due to Red Bulls’ intense counter-pressing, they could prevent some of the attempted counter-attacks. Furthermore, the full-backs were crucial in the counter-pressing, as they were occupying relatively deep they had the primary task to press when the team lost the ball. For example, Lawrence had some good actions where he collected the lost ball.

Having said that, NYCFC were still able to counter-attack but the quality scoring chances were missing for them. As I mentioned, as the game wore on, NYCFC were able to create longer spells of possession in the opponent’s half but they also struggled against New York Red Bulls’ midfield pressing or low-block depending on the situations.

The Red Bulls used intense pressing in their half, especially after a backward pass. This made circumstances difficult for the guests to play or break down the opponent’s defensive organisation.

As this image highlights below, NYRB aggressively moved out towards the ball to force the NYCFC to make a mistake that could create a scoring chance for the Red Bulls. The ball was played back to Callens who pressed by Rzatkowski, this forced the ball wide. Cásseres, followed Alexander Ring and David, protected the space to allow the winger to move out to press the ball.

Another aspect of NYCFC’s possession play was a relatively frequent switch of play. In general, this could create a chance for the attacking team as they find space on the far side, if the defence doesn’t shift quickly enough. However, as the situation below shows, New York Red Bulls had the quality in terms of defending thus they were able to quickly close down the far side.

After the switch of play, Murillo stayed narrow and the winger, Muyl, shifted out to press the opposition wing-back whilst Rzatkowski and Davis covered the nearby opponents. With these movements, NYRB were able to stop the attack and force them back.

After the break, NYRB came out with an intense pressing again, which gave them the ball. Also, there was a change as they tried to overload NYCFC’s last line. In order to do that, Cásseres had the licence to push forward centrally thus he occupied higher than Davis. This pressure on the guests’ defence continued until the 60th minute where the Red Bulls grabbed the lead with a header by Royer.

It was an interesting encounter where both sides struggled a bit and were not able to create effective and dangerous sequences in the opponent’s third. There were no quality chances for both teams but in the end, the New York Red Bulls won the New York Derby, although some controversy arose.