Montreal Impact visited the Big Apple on an MLS midweek fixture where the guests significantly reduced the New York Red Bulls’ threat and won the match in the second half with scoring two goals. This tactical analysis will reveal both teams’ approaches and how Montreal beat Chris Armas’s side.

There were no clear favourites, on one hand, the visitors had a slightly bigger chance as they doing good in the MLS Eastern Conference though. With recorded five wins, four draws and two losses they are on the upper half of the table.

On the other hand, NYRB started to get into the better form after a pretty bad season start. Last week they achieved a magnificent victory against LA Galaxy. In addition to that, the previous meetings make NYRB’s side hopes stronger since Montreal the last victory at Red Bull Arena was in 2016. 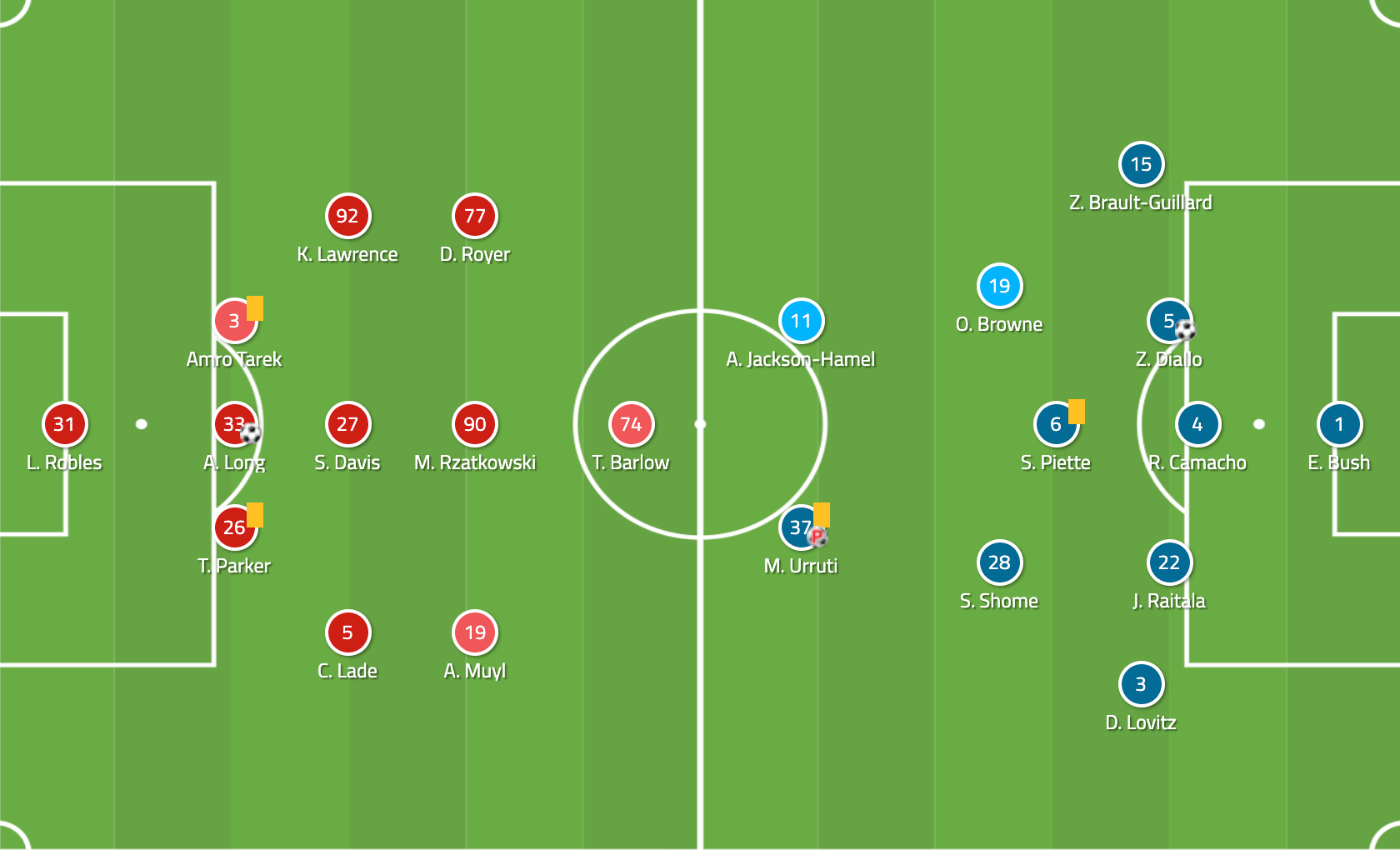 The visitors switched from the usual 4-3-3 formation to match the opponent’s structure thus Rémi Garde deployed 5-3-2 system where Rudy Camacho started between Raitala and Diallo in the middle of the defence. Brault-Guillard and Lovitz employed as a wing-back. On the midfield department, Shome and Browne replaced Taïder and Azira. While Ignacio Piatti is out due to his injury, Jackson-Hamel and Urruti started upfront.

The home side also has a painful absence, namely Bradley Wright-Phillips who was usually replaced by White, but this time Tom Barlow made it to the starting XI as a lone forward in a 5-4-1 system that Chris Armas recently deployed. Although it was more likely a 3-3-3-1 in possession and in defence, the formation transformed into a 5-1-3-1/5-4-1 shape, which I will explain below.

First of all, it is important to see how NYRB’s structure worked in this match. Usually, they positioned high right from the beginning in order to attack and press the opponent. As a consequence of that the wing-backs, Lawrence and Lade pushed out of their positions from the base 5-4-1 shape and mostly occupied the wider areas of the midfield next to the touchline.

In front of the three centre-backs, Davis added more cover to the centre between the defensive and attacking department. Due to the wing-backs involvement in attack the wingers, Muyl and Royer could stay narrow – mostly in the half-spaces – and Rzatkowski was between them.

Chris Armas’ goal was to create a high-intensity game both in the possession and out of it. They used long balls towards Barlow and the front players always shifted to the ball side to create short passing options around the ball. In addition to this, New York Red Bulls often tried to create crossing opportunities.

Furthermore, during the match NYRB frequently pressed high. In this sequences, the striker formed the first line of the press with the aim to press the side-backs with curved runs the ball-sided winger moved out to press diagonally.

As I mentioned earlier, the guests opted for a 5-3-2 system to match NYRB’s structure. With this Montreal were able to close down the opposition wing-backs while they have enough presence and cover in the middle. Also,  with the two strikers, they had enough target up front for the long balls. In possession, the wing-backs pushed forward next to the touchline and Browne often moved to the attacking right half-space or even to the first line.

In Montreal’s attacking play it was clear from the beginning that they would be targeting the left half-space and the wing. They had two breakthroughs in the opening first two minutes. Usually, Raitala passed behind NYRB’s first lines of presses, targeting the space behind Muyl where Urruti dropped mostly around the halfway line. Davis could not shift quickly enough and Lovitz occupied the opposition wing-back thus space was uncovered there. Then they used quick one-twos to get behind NYRB’s shape, as the image shows below.

They often used this pattern, although New York Red Bulls started to pay attention to this as the game wore on and closed them down. Another opportunity was to pull out the opposition defenders and quickly fill the vacated space. Here is an instance where Brault-Guillard pass behind the opponent defence targeting Browne’s run.

Moreover, Montreal in attack emphasised long balls in behind the opposition shape. Although it was not too effective because lots of counter-attacks got stopped or delayed due to NYRB’s intense counter-pressing which often made Montreal players act in haste.

When NYRB tried to build from the back they struggled against Montreal’s defensive block due to the isolation and the lack of penetration power.

Here is another occasion where Montreal made a good defensive job thus New York Red Bulls suffered against Montreal’s 5-3-2.

One thing that the home side tried to do is long balls towards Barlow, however, these attempts were not effective. 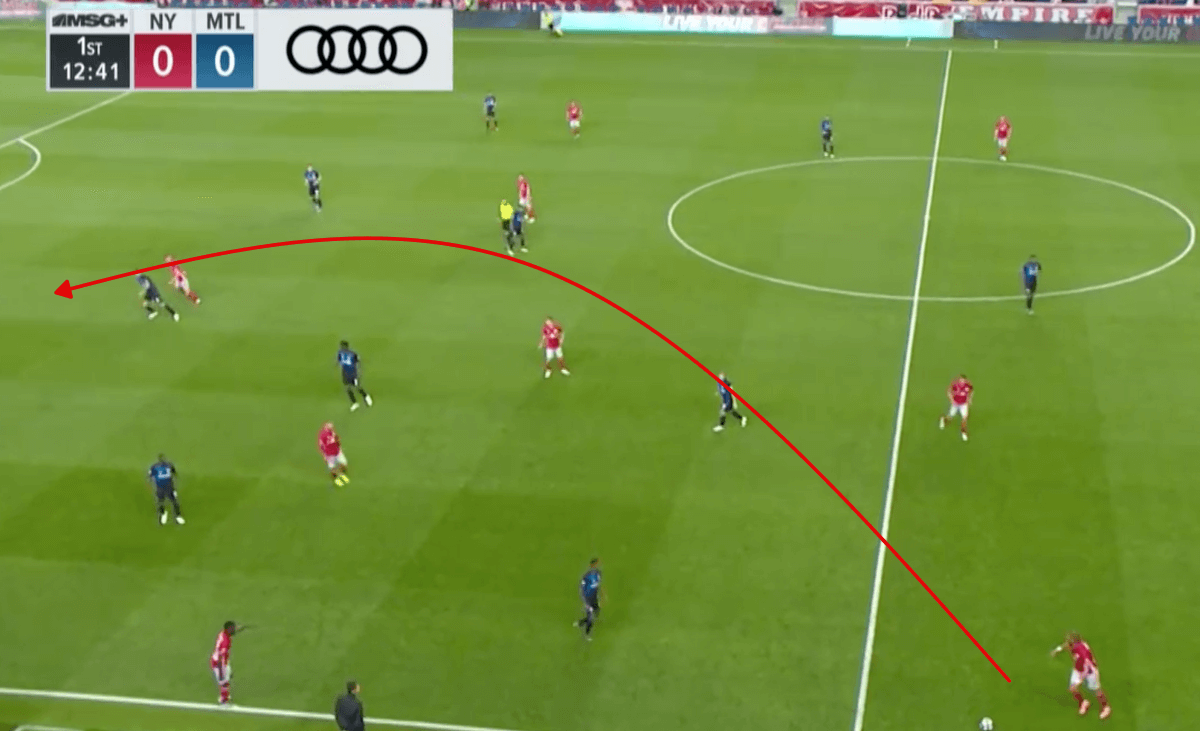 After the break, Montreal started to exercise dominant play as a natural response to NYRB’s lead. This gave them longer possession phase at opponent’s half which allowed to more players join the attack. Thus not just Browne pushed forward but Shome also did and sometimes Piette too.

Although committing lots of players in high areas does not mean they become more dangerous since New York Red Bulls were always able to quickly put pressure on the ball. Montreal struggled to break down this defence. Only the corners gave them the opportunity to score and they did.

After the equaliser goal, Chris Armas sent in a midfielder (Fernandez) to replace a centre-back (Tarek) and Kaku for Muyl. This allowed switching to a 4-1-4-1 formation which in possession was more like a 4-2-3-1. Of course, this caused some risk at the back since Montreal’s front two were left with just NYRB’s two centre-backs.

Finally, Montreal were able to score the winning goal in the 79th minutes after a questionable decision that gave them the penalty.

None of the goals occurred from open play which shows us that neither sides allowed too much for the opponent. Especially Montreal Impact who significantly reduced New York Red Bulls attacking power. NYRB could not excel danger for the guests’ goal as they had only 0,44 expected goals.