The second leg of the Europa League semi-finals between Valencia and Arsenal was poised brilliantly. Arsenal had a two-goal lead but with the recent comebacks of Liverpool and Tottenham against Barcelona and Ajax respectively, it would have been premature to write them off. The fact that Valencia had defeated Huesca 6-2 during the weekend in the La Liga was even further cause for apprehension for the Gunners.

In contrast to that, Arsenal were effectively out of the top four race in their domestic journey as they could manage only one point against Brighton when they needed three to stay alive. The pressure was all on Unai Emery to perform as Valencia had nothing to lose, and in their own home stadium – the Mestalla – no one was expecting them to adopt a defensive game plan.

However, Arsenal defeated them comfortably in a six-goal thriller to book a place against Chelsea in the final in Baku. Valencia opened the scoring in the tenth minute but Arsenal responded in kind and more as both of Arsenal’s strikers – Pierre-Emerick Aubameyang and Alexandre Lacazette were in top form, the latter even getting his first hat-trick for Arsenal. In this tactical analysis, we’ll talk about the tactics employed by both managers and how Emery was the more decisive of the two.

Arsenal lined up in a 3-4-1-2, with only two changes from the first leg’s starting eleven – Shkodran Mustafi was benched for Nacho Monreal while Lucas Torreira came in for Mattéo Guendouzi. Valencia moved back to their tried-and-tested 4-4-2 after the unconvincing experiment with three centre-backs in the first leg. They made three changes as well – Facundo Roncaglia, Mouctar Diakhaby, and Carlos Soler were replaced by Daniel Wass, Kevin Gameiro, and Francis Coquelin. 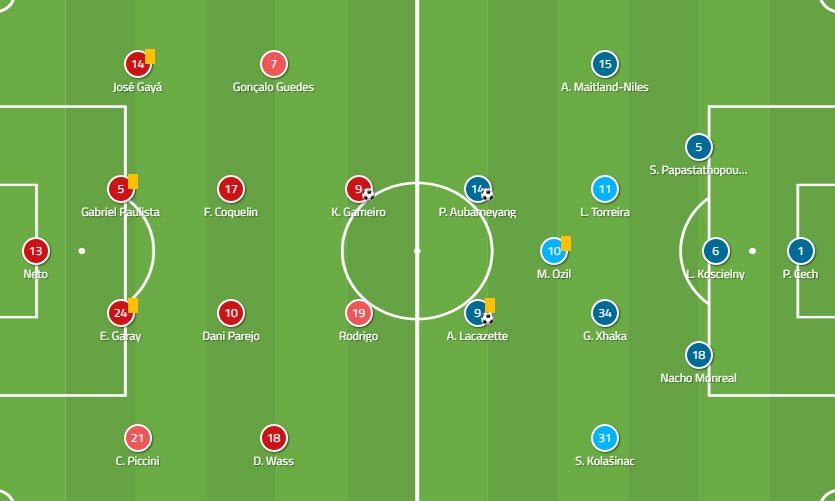 It was clear from the beginning that Arsenal hadn’t come here expecting to dominate possession and be protagonists with the ball. Valencia set up an expansive structure for attacking with the ball and pressing off it. They lined up in a 4-4-2 which morphed into a fluid 2-4-4 with both of the full-backs moving up and providing width. They had a double pivot of Francis Coquelin and Daniel Parejo in the centre of the field to provide stability and a base for the attacks to spring from. The double pivot has been at Valencia since Emery himself was the manager. Parejo himself admitted in an interview about Emery’s tactics and the similarities between his Arsenal and Valencia.

“…It surprised me to see three centre-backs sometimes; he never did that here. But he has always liked to play with a doble pivot, two in the middle. The best coaches adapt and he hasn’t been there long, so it will take a while still…”

The width was provided by the wingers – Gonçalo Guedes and Daniel Wass and the strikers were dynamic, moving laterally as well as hunting spaces in between the lines.

Building out from the back?

Valencia didn’t necessarily build out from the back. The goalkeeper Neto hit it long if Arsenal pressed up high. He usually aimed it for the flanks as the central strikers Rodrigo Moreno and Kevin Gameiro weren’t the best at winning the ball or holding up play against the likes of Sokratis or Laurent Koscielny. However, more often than not Arsenal didn’t press up high as Emery wanted to keep a compact shape. Hence, the centre-backs weren’t harangued much carrying the ball out the back. Arsenal’s forwards only engaged them once they reached the halfway line.

Valencia employed the flanks heavily to progress the ball up the field. The centre-backs played the ball among themselves and when either of Arsenal’s strikers reacted, they played a ball to the full-back on that side. The full-backs themselves didn’t position themselves very high but instead stayed lateral to the interior midfielders. This was so that they could exploit the pocket of space which opened up in Arsenal’s structure when any of the strikers left their man. From there the full-back was able to drive forwards with the ball. As this happened, the near sided striker also moved out to provide a passing option inwards. The winger stayed out which opened up overlapping possibilities. These overlaps were Valencia’s most important mechanism to move into the final third.

Another way of progression was for the striker to drop in between the lines or in the half-spaces. This usually happened after a back-pass. Arsenal defended in a centrally compact block so whenever a back-pass happened, say from a full-back to his centre-back, the defending team naturally moved forward. This opened up spaces in between the lines as the back-line was pinned by the wingers. These spaces were used by Rodrigo to drop into and when his teammates were expecting this to happen, it led to him receiving the ball in dangerous areas.

Wing dynamics and isolating the wing-back

As mentioned in the previous paragraph, Valencia used the flanks a lot. Their entire progression plan was hinged around creating wide overloads. How did they manage this? One of the mechanisms was the wide position of the wingers. Guedes and Wass stayed right at the shoulder of the Arsenal wing-backs – Saed Kolašinac and Ainsley Maitland-Niles. However, the strikers also occupied the left and right centre-backs drawing them narrower. They attempted to create gaps between the centre-backs and wing-backs by tightening their attacking structure in the middle (or zone 14). This created the necessary gaps in the channels. Once the full-back drove forward with the ball, he could use these gaps to play the winger in or dribble into space himself.

These gaps also facilitated the second goal of the match. As seen below, the midfielder is allowed to dribble inside the half-space. The winger then makes a run behind Kolašinac who is switched off for a minute. He can then take advantage of the acres of space and plays a simple cut-back which results in a goal.

Another way to achieve qualitative superiority was by using switch-balls. These long diagonal balls were a marked feature of Valencia’s offence. This was due to a number of reasons. The first reason was that Arsenal were defending very narrow and hence the far-sided winger was almost always in a lot of space. The second reason was that they’d identified Maitland-Niles as a defensively inferior player and frequently targeted him via long balls to Guedes who’d then take him on 1v1 and look to cut inside and shoot. This did lead to a few shots from high-quality areas but none of them was on target.

Valencia were proactive off the ball in this leg. They defended up the pitch holding a much higher line. The press was initiated by the forwards, who engaged the Arsenal centre-backs when they had the ball. The two forwards occupied the near-side centre-back as well as the innermost centre-back – Koscielny. If the ball was still not cleared or played back to the goal-keeper to circulate to the other side, the far-sided winger came into play pressing the other centre-back (Sokratis in the picture below). If the wing-back (Maitland-Niles) dropped to receive, he was followed by the full-back – José Gayà. This did leave spaces in behind as the midfielders weren’t shifting over to the other side timely which gave Torreira the space to move ahead and attack Valencia’s back-four. But the defenders pushed up and reduced the spaces.

When they weren’t actively pressing or when Arsenal had possession for a sustained period of time, Valencia looked to force play out wide. They cover-shadowed the Arsenal double-pivot using their forwards and ensured that no passes were played inside. If the passes were played laterally from the wing-back to the midfielders, the Valencia midfielders would jump and tackle so as to not allow Xhaka or Torreira to turn with the ball.

Arsenal defended in a 5-4-1 with the strikers tucking inside on either side of the double pivot of Lucas Torreira and Granit Xhaka. Mesut Özil was usually the one staying ahead and his job was to press the deepest midfielder when Arsenal pressed with their forwards. Lacazette and Aubameyang switched flanks a few times in the game but it was mostly Lacazette on the left with Aubameyang on the right out-of-possession. This was a slightly different approach as Arsenal don’t usually defend that way even when playing with three centre-backs. However, Emery had clearly studied Valencia’s offensive structure because the strikers were essential in neutralizing the wing overloads. When the Valencia full-backs – José Gayà and Piccini were attacking the spaces, the forwards would drop back and curve their press so that they couldn’t find an inside pass.

During later stages of the match, Arsenal defended in a slightly lop-sided version of their defensive block with the small change that one of the forwards (the ball-far forward) would usually stay higher up the pitch. This was essential in easing offensive transitions as the advanced forward provided an outlet. The outlet was useful because Valencia were throwing everything into their offence and hence were leaving spaces behind to be exploited during counters.

In a match where possession is divided almost equally (Valencia had 55% of the total possession), transitions become very important. Indeed the first goal of Valencia was due to a direct counter-attack as Arsenal failed to transition effectively into their defensive phase. Valencia used the flanks (no surprises here) during counter-attacks, utilizing the dribbling ability of Rodrigo and Guedes. Indeed Rodrigo had troubled Arsenal in the first leg as well during transition phases and it was a similar case the last evening. The first goal is illustrated in the picture below – the midfielder plays a long ball to Gameiro who plays it first time to the full-back. He carries the ball down the flank and plays Rodrigo in who crosses to Gameiro who scores into an open goal.

Arsenal defeated Valencia 7-3 in aggregate and much of that was due to the fact that Aubameyang was on song. His link-up play with Lacazette was impressive and he was clinical in front of the goal. In the other semi-final, Chelsea defeated Frankfurt to set up a London derby for the Europa League final. Arsenal couldn’t have asked for a more difficult albeit familiar opponent but they’ll be more hungry as next year’s Champions League football hangs in the balance.