Jarrod Bowen is having yet another impressive year in the Premier League, as part of the strong West Ham United team who at the time of writing are sat in the Champions League places. Bowen rose from non-league football starting his career with Hereford after failing to sign with any professional clubs at the age of 16. After impressing at Hereford, Hull City took him in, and Bowen went on to make 100 appearances for the Yorkshire club over six years before West Ham United purchased him for £21 million in the January of 2020.

Bowen was born in Hereford and his international status was once one of confusion with him being eligible for both Wales and England – Wales were keen to cap him sooner than England would however Bowen chose to only ever represent England. The demand for an England call up is growing every week as Bowen is cementing his status as one of the Premier League’s best attackers. The rumours around Bowen departing the London stadium heighten every day with Liverpool being the most likely to capture his signature.

This tactical analysis and scout report aim to analyse the reason for Bowen impressive form at West Ham United and why he is attracting the attention of the European giants Liverpool.

Jarrod Bowen is an inverted inside forward. This means that Bowen plays on the right-hand side despite being left-footed, something which is one of the most increasingly popular tactics in the modern game. This is shown by the heat map below which shows the areas on the pitch Bowen has occupied most this season. As Bowen is left-footed, he often drifts inside and the ability to occupy the half spaces is one of his strengths, which we will cover in this analysis. 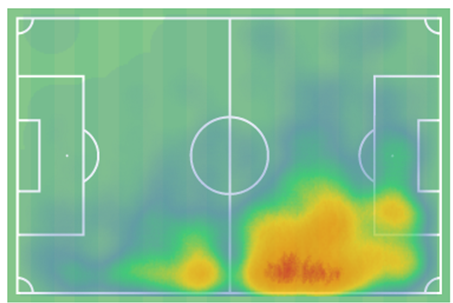 He also likes to get in the box and central areas, and this allows Bowen to get amongst the goals. Below is a shot map from Bowen this season, showing the majority of his goals have come centrally and being able to get centrally in the box is another strength of his game. 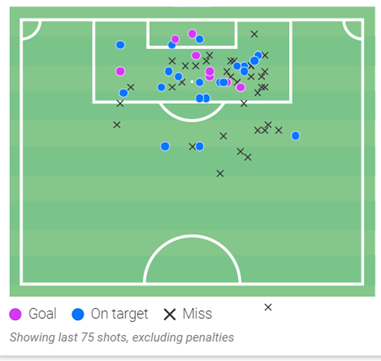 The importance of data when evaluating players in the modern game is becoming increasingly important. Assessing the data of Bowen this season may give a hint to why Liverpool is interested in the West Ham United man but also indicate some of his key attributes. With all attackers, the best place to start is with goals and assists. Bowen has managed five goals and seven assists so far in the Premier League this season. This is in addition to three goals and one assist in other competitions like the Europa League. Bowen is well above average in assists this season and slightly below average goals amongst the top strikers and attackers in the league. This is shown below in the image. 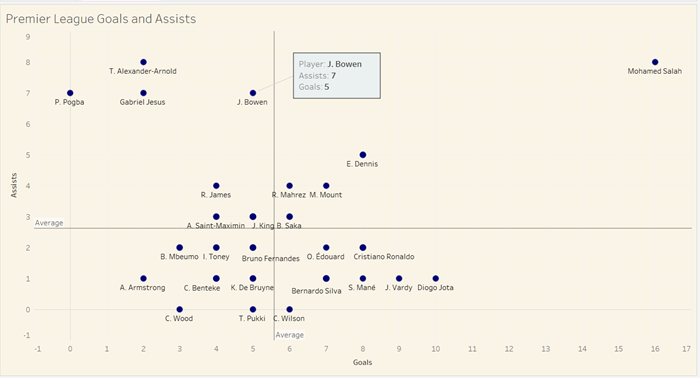 As always when looking at goals and assists, expected goals and assists must be considered. As both goals and assists can be heavily influenced by luck and evaluating the value of goal scoring chances scored or chances created gives us a better picture of a player’s performance. Bowen is above average in both metrics, with an XG of 6.62 and a XA of 4.9. This indicated that Bowen is overperforming his assists but underperforming with his goal-scoring. 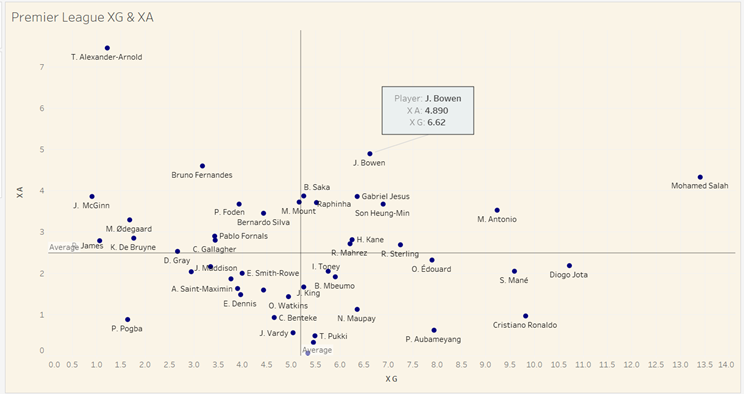 Taking both these graphs into account we can see that Bowen is one of the best attackers in the league being able to produce both goals and assists regularly.

As eluded too earlier in the scout report, Bowen often occupies the half-spaces. Drifting in off the right side and looking to get on the ball and play passes and utilize the space. Within this space it allows Bowen to play through balls, crosses or even play the ball out wide to overlapping full-backs. Being in these spaces can often make him hard to mark, as whose responsibility it is to mark Bowen and be hard to decipher.  Here you can see how Bowen likes to manipulate the half-spaces; this is from a recent game against Watford. Bowen has dropped into the highlighted space and is going to play the ball out to Coufal.

As he plays the pass, Bowen looks to make a run forward before pulling back into the half-space to receive the ball back. After a good touch and turn, Bowen is in the pocket of space facing forward. Lanzini makes a clever run to pull away from the Watford defender and it allows Bowen to play a pass into the highlighted space and Soucek meets the pass and scores for West Ham United.

Within this passage of play, the key here is Bowen using this space as it drags the Watford back four out of shape and then allows Soucek and Lanzini to make runs manipulating the space created.

Bowen can also use these spaces to make run as well as creative passes. This is from Wednesday night’s game against Norwich where Bowen scored a brace. In this case, Lanzini is just gathering the ball and Bowen is again occupying the half-space. Here Bowen is going to look to get between the centre-back and full-back, as shown below.

Lanzini gathers the ball and plays it forward to Pablo Fornals, as Fornals receives the ball Bowen is right between the full-back and centre-back. Bowen uses this position to make a run in behind a good pass from Fornals releases him through on goal.

Bowen gathers the ball through on goal and chips the on running Tim Krul but is denied by the crossbar. The use of these half-spaces will be of interest to Liverpool, especially using them to make runs, something they like from their wide men, utilising the space created by the number nine dropping deeper.

Getting into the box

As we have already seen in the above example Bowen is not afraid to get forward and get into the box. Making runs and drifting into the centre of the pitch is his preferred method. This is usually how Bowen gets his goals. Having the ability to get forward and drift into the box allows Bowen to get amongst the goals which can help separate him from other attackers. A great example of Bowen getting forward and into the box comes again in the most recent game against Norwich. The move starts with Bowen pinning his man and playing a nice, cushioned pass to Manuel Lanzini off a long goal kick, as shown below.

Lanzini then plays the ball into Pablo Fornals, who opens his body up and is looking to find Masuaku. At the top of the screen Bowen is highlighted and you can see how he is looking to make a run into the box.

As the ball arrives at Masuaku, Bowen is ready for the cross to come in, however, Masuaku takes a touch into the highlighted space.

Although Masuaku should find Bowen the first time, Bowen doesn’t give up on the phase of play and when Masuaku has his touch and is ready to cross Bowen makes sure to stay onside and give himself a chance at converting the ball. Masuaku finds Bowen in the 6-yard box and converts for his second of the game.

The run into the box has allowed Bowen to find himself in a goal-scoring opportunity, his other goal in this game is of a similar style however he converts with his head. We must also notice that Bowen starts the move with an effective cushion pass of the goal kick, although it seems basic, the brilliant execution of that pass starts the move.

The days of attackers attacking and defenders defending are no longer, modern players must contribute to all phases of the game and assessing an attacker’s defensive contribution is important. When looking at Bowen’s defensive contribution can again indicate why Liverpool is interested in him. Klopp likes his attackers to be active and be able to contribute defensively especially with his high press system. There are a couple of ways of assessing Bowen’s defensive contribution and data is one. It allows you to accurately see what a player is doing out of possession throughout a season. Below shows defensive duels and defensive duel win percentage amongst the Premier League attackers. As you can see Bowen is above average in both metrics. Showing he is active in engaging in defensive duels but also successful in winning them. The current Liverpool front three, Jota, Mane and Salah are all above in one of the metrics. 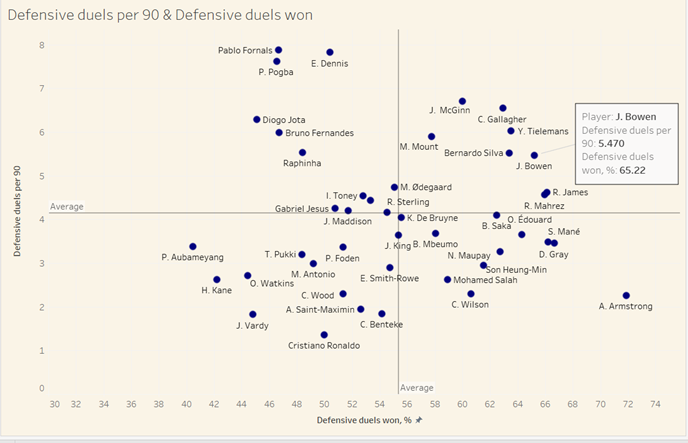 In addition to defensive duels, Bowen excels in interceptions as the below graph demonstrates. Again, above average in both PAdj interception and interception per 90. PAdj means possession adjusted which was created to balance out the bias defenders in low possession teams had. So, the metric is measured as if possession of a game was 50/50. 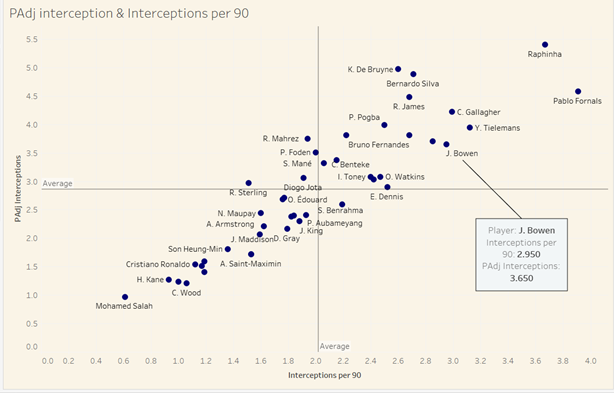 Through looking at these metrics we can see that Bowen is also a top performer out of possession as well as in possession. Something which will certainly be attracting Liverpool.

Jarrod Bowen is an underrated talent in my opinion and I think whoever captures his signature has pulled off a real coup. The lack of international football and rise from non-league are factors that maybe help Bowen go under the radar when talking about the best in the Premier League, as the numbers show he is one of the best. If Liverpool signs Bowen, they will acquire who will fit and provide a quality squad addition who has consistently shown quality and end product in the Premier League.