At the end of the last season, Oliver Glasner left Wolfsburg and became the new Eintracht Frankfurt head coach. Schlappekicker had a difficult start in 2021/22 Bundesliga as they began the journey with a 2-5 loss to Borussia Dortmund, then, only had one win in the first 10 games. They were very close to the relegation play-off zone after the draw against RB Leipzig (15th). Dramatically, the 47-year-old head coach turned things around and led Frankfurt back to the top-four race, as they won six out of the last seven, entering the winter break with just one point behind the UEFA Champions League spot.

Apart from Wolfsburg, Glasner previously gained experience at LASK and SV Ried, he was also one of the assistant coaches of Roger Schmidt in RB Salzburg because he asked Ralf Rangnick for that opportunity. Intriguingly, Glasner was not very “Red Bull” compared to the likes of Jesse Marsch or Matthias Jaissle, he paid greater emphasis on the positional structure of the team instead of only focusing on verticality. This tactical analysis explains Glasner’s tactics and philosophy of plays transmitted to Schlappekicker this season, and the secrets behind their strong streaks.

Power of the left corridor

In the first few games, Glasner played Frankfurt in a back four, just like his 4-3-3 at Wolfsburg as well. But things did not go well, so he reverted his side to a back three system that succeeded in Adi Hütter’s tenure. Specifically, his side played in a 3-4-3 or a 3-4-2-1 and the players fit very well in this structure.

In the offensive organizations, their key players were Daichi Kamada and Filip Kostić. Both were the regular starters who played on the left side, and this was the flank that became the main source of threat. The 3-4-3 or 3-4-2-1 formation had two 6s, which allowed Schlappekicker to play with a 3-2 structure in the construction phases proceed the ball forward. 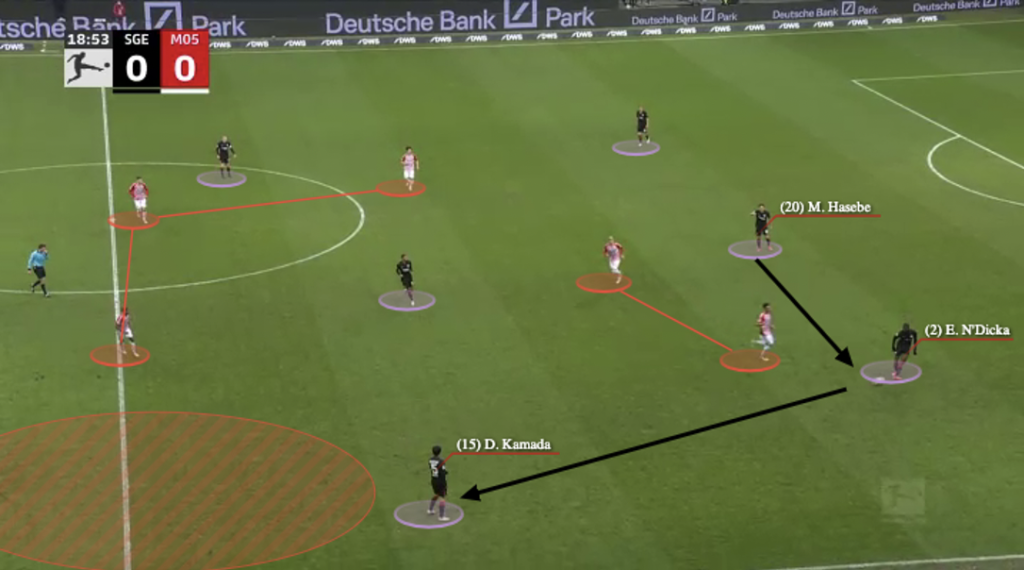 The first image shows Kamada’s impact in the construction of the attack. Usually, Kostić would push high to provide the offensive height and push the wide defender down. This allowed Kamada to drop into the vacated left-sided area in the second third. The example also demonstrates a sequence of play, as Frankfurt preferred to move the ball from the central centre-back to the left centre-back instead of chipping to Kamada’s zone. It was important as that invited the press of the strikers, and they had a 3v2 numerical advantage in the first line to play out from the back.

The three centre-backs of Frankfurt’s 3-2 imbalanced Mainz 05’s 5-3-2 and you could interpret that as a 5-2-3 as well. The most important were the positions of 6s, who stayed in the centre to fix the opposition midfielders. Then, the red spaces were created for Kamada to turn and exploit as the Mainz midfielders were late to close that space. 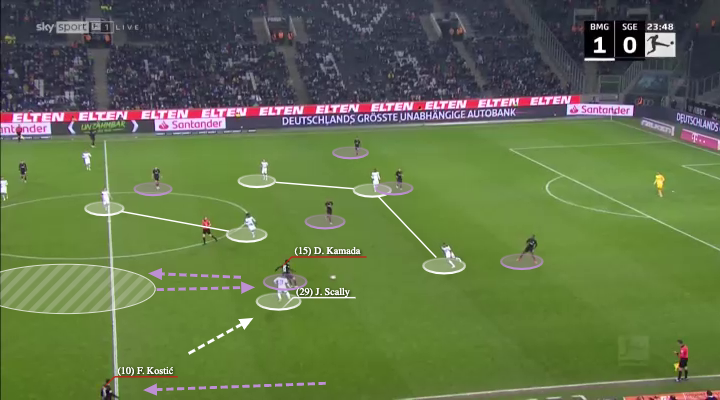 Glasner had really careful tactics that were planned to the details to help the team, you could see that via this example against Borussia Mönchengladbach. Again, they had a 3-2 structure plus Kamada dropping, this time, the Japanese player was a bit inner in the half-spaces. The opposition shape was a 5-2-3 that matched the back three of Frankfurt, and also the two 6s. Then, Kamada became the free player in that central 6v5 to receive.

But, how to escape from the press? Schlappekicker had a great movement between Kamada and Kostić to confuse the opposition. As the left wing-back went high and the attacking midfielder dropped simultaneously, the reversed movement prevented the centre-back of Mönchengladbach to step up as Matthias Ginter (not in the screenshot) watched Kostić’s run. Then, it was the right wing-back (Joe Scally) to press Kamada, but notice that was from the diagonal angle of the receiver. Since the centre-back was dragged down by Kostić, Kamada could simply turn in the inside and go to white spaces. The creation of white spaces was just the same as we explained the red spaces in the previous example. 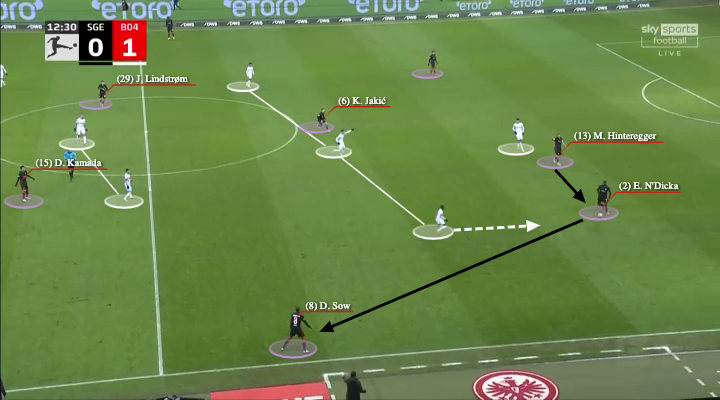 But dropping Kamada was not a dogmatic, it was not the principle of play, instead, just the tactics to counter specific opponents. Against the 4-2-3-1 of Bayer 04 Leverkusen, they would not need that many players in the construction, so Kamada stayed higher instead of dropping deep. It was a 3-2-4-1 formation for Frankfurt with a 6 moving to the outside space. Again, Kostić never moved deep to kill space, he must stay high and wide to push the wide defender deep to vacate that left-sided area.

The passing sequence was the same, before going to find Djibril Sow, Martin Hinteregger must use Evan N’Dicka to invite the press of the right-winger, so no one could cover the spaces outside. Also, the 10s (Kamada and Jesper Lindstrøm) moved into the half-spaces to fix the 6s of Leverkusen, so they could not jump onto Sow. That allowed Frankfurt to play out from the left side once again. 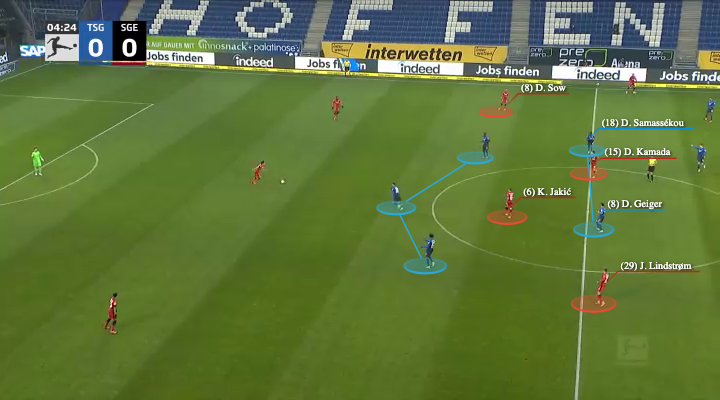 Against TSG Hoffenheim’s 5-2-3 defensive shape, similar concepts were shown but the positions of players were a bit different. It was the same 3-2 which Sow moved to the outside, and Kristijan Jakić staying in the inside to keep the striker away from the centre-backs. To free Sow on the left side, the key was Kamada’s movement and positioning in the half-spaces that dragged the 6 of Hoffenheim inward, so Diadié Sammaékou could not Sow on the left flank. 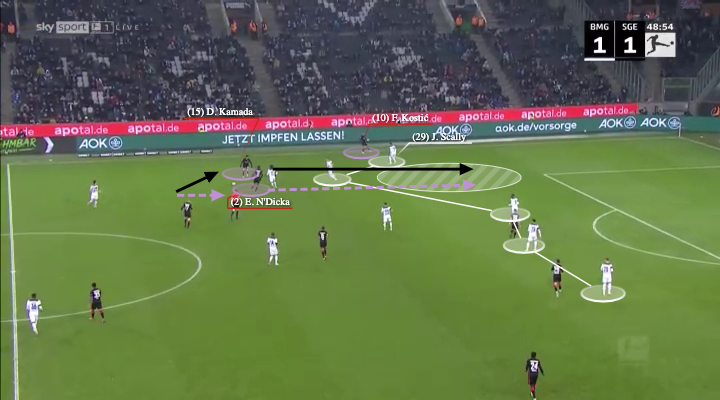 Frankfurt were really strong on the left side, and goals were coming from that side as well. For example, the second goal against Mönchengladbach was attributed to the movements and rotations from this flank.

The above image was the scenario before the goal, Kamada already dropped deep to receive in the left half-spaces, where was available as Kostić was high to push Scally down. N’Dicka played a one-two with Kamada, and used spaces behind of the centre-back as he was pulled out by Kamada’s dropping movement. Then, they penetrated into the penalty area and grabbed that opportunity to make it 2-1.

The PPDA of Frankfurt in Bundesliga was 9.63, ranking 7th in the league, it shows they would press high but the engagement line was not too high, they only did that on occasions. Glasner’s pressing was not about man-man, instead, his side defended with the primary focus of closing spaces in the centre.

This section includes how Frankfurt defended when their opponents came with different shapes. 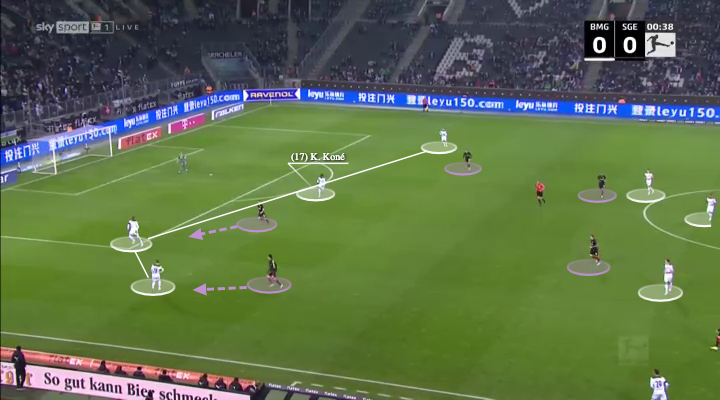 Against Mönchengladbach, a team that played with a 3-1 structure in the build-up, Frankfurt players were clear about the duties. The Schlappekicker 6s should not let the opposition midfielder to take them out as there were more players behind them as much as three. Therefore, it was important to press in the right timing with runs that limited the options of opponents.

Therefore, the Frankfurt 6s stayed deep instead of orienting themselves towards Manu Koné, so they could close spaces in the centre. The front players shall press when the oppositions were going to the wide centre-backs. Notice the run of striker should be slightly diagonal so Koné would be under his shadow, with the left-winger (Kamada) continuing the press when the opponents moved the ball further lateral. When pressing, the opponents must feel the pressure and being forced to play, this was an important concept when it came to the pressing traps, which we would explain later. 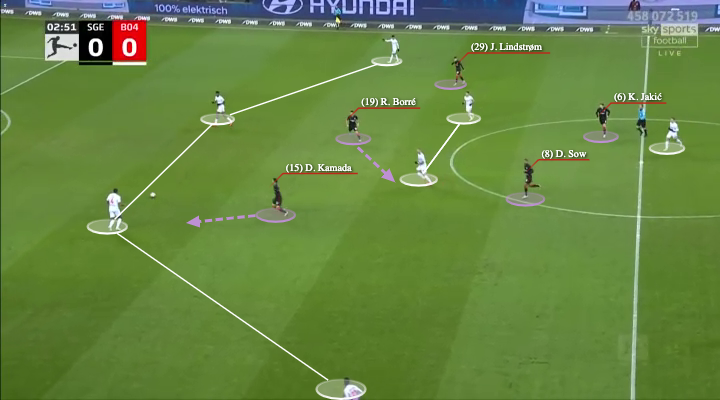 Against Leverkusen’s back four, there was no need to match the centre-backs with the front three as more men shall be committed to cover the two opposition 6s. Firstly, the press from winger/10s should came from the half-spaces as Kamada did above, so they narrowed the diagonal angle of the centre-back to reach their 6s. Also, you could see the striker prioritized to cover the Leverkusen 6s, as Rafael Borré dropped back a little bit to that space. Meanwhile, Sow cooperated and supported by moving ab it forward, so there were multiple players in the centre to bait that pass. That was a trap! Even the opponent did not fall into it, they still did not let the attack went inside them. 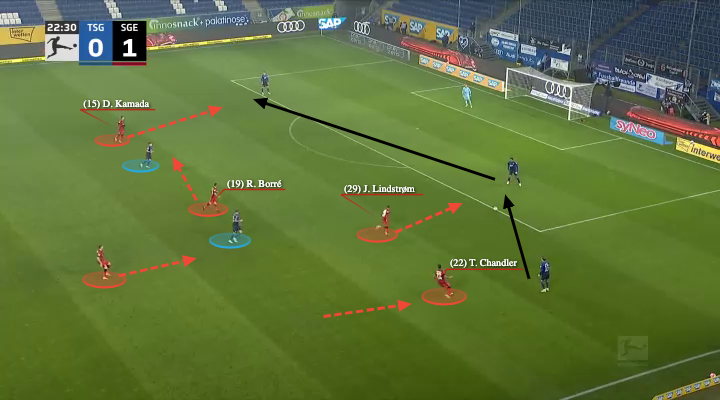 On some occasions, Glasner even instructed his striker to stay with the oppositions 6s instead of going high to press the centre-backs. Against Hoffenheim, who also played with two 6s and players dropping behind the midfield, Frankfurt did not want to push both defensive midfielders high, or else the centre-backs were exposed with the large ground to cover.

Because of the number Frankfurt committed to dominating central spaces, they did not let Hoffenheim play inside easily. The opposition just circulated the ball outside of the formation and struggled to break the lines. And you could see why Borré was around the opposition 6s, as he needed to shift from one 6 to the other 6, covering Kamada who went out to press the wide centre-back. 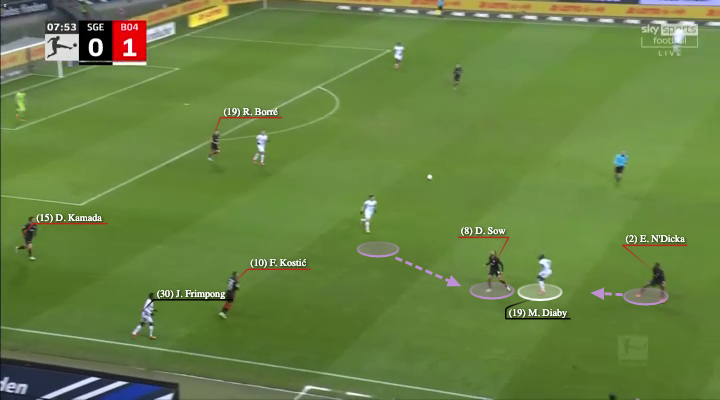 This example shows the reason to keep the opposition midfielder deep, it was a strategy to protect deeper spaces when the opposition played it long. Initially, Frankfurt pressed the ball side with a tight man-man as Borré was on the 6, Kamada went up to press the centre-back, and Kostić stayed tight with the Leverkusen right-back. But when the opposition became more direct, the Frankfurt midfielders must be aware of the spaces behind so they could help the centre-backs. In this case, Sow retreated to control Moussa Diaby with N’Dicka, it was a 2v1 on the long ball target and they recovered the ball. 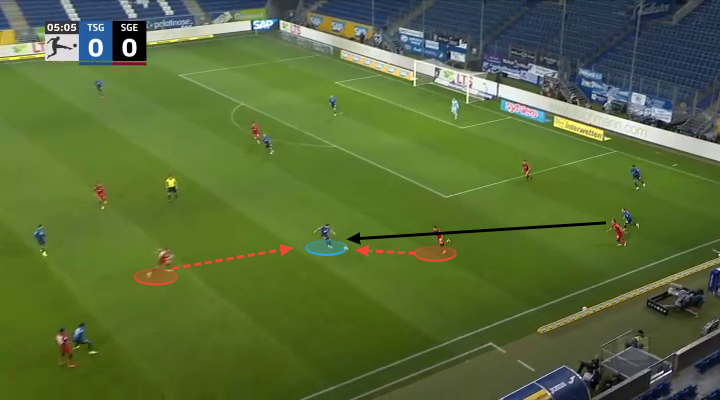 Regarding the pressing trap, most teams deployed a side trap as it was easier to cage the opponents with the bound of touchline. However, Frankfurt were brave enough to set central traps and used that as a tool to disrupt the opposition’s rhythm. Initially, they sometimes left the central player free as a bit, the Frankfurt midfielders were staying a bit deeper because of the explained reason. Then, when the opponent went into the centre, it would trigger the press of the Schlappekicker midfielders or even one more player to press. In those situations, they would not let the receiver to control the ball, but forced him to play if possession was not recovered in the first action. At least, the tempo of the attack was disrupted and there were more errors because of that lack of time. 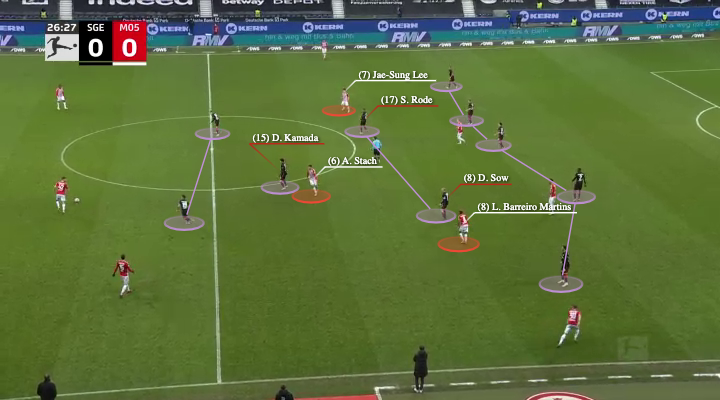 Against Mainz, who had three midfielders in possession, Glasner balanced the midfield distribution by changing the defensive shape to 5-2-1-2. Intriguingly, it was not Borré dropping deep, but Kamada to cover the 6 of the opposition. So, it was a 3v3 in the midfield balanced the number in the centre.

In terms of the rest offence, Glasner left Lindstrøm and Borré high as these players were good at running behind, they could provide the transition threat which we would explain in the next section. 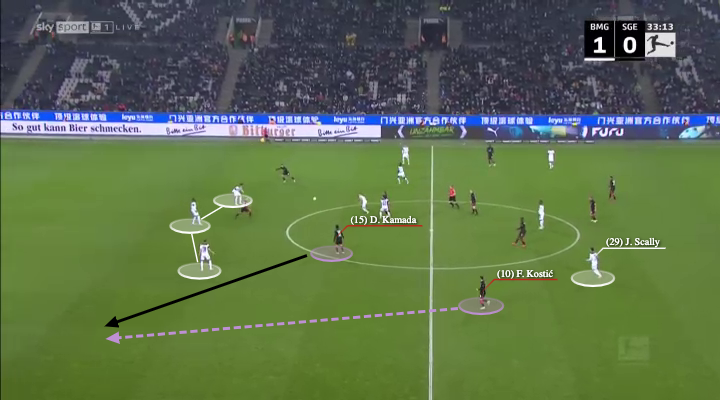 Specifically, their counter-attacks on the left side were a great threat as Kostić was there to attack the wide sapces. Usually, Kamada would be in the centre to receive at feet, and release the wing-back to exploit spaces outside. In this example against Mönchengladbach, Scally was caught too high in the attack so he totally lost Kostić in the transition. 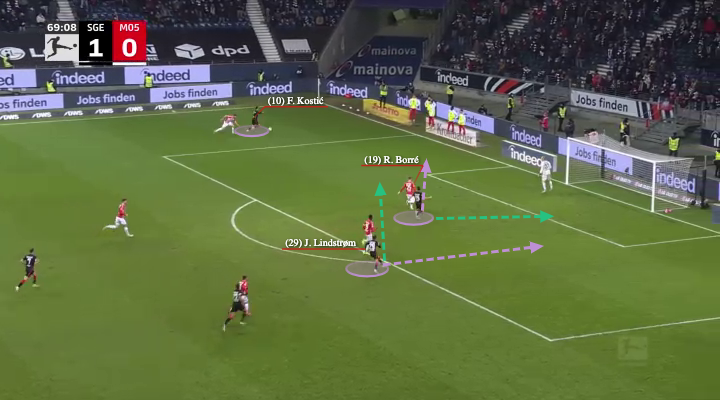 Schlappekicker had a really great end in 2021, their form was strong and topped in the UEFA Europa League, they also beat Bayern Munich in a difficult 2-1 victory. As we concluded in this analysis, Glasner had clear tactical plans and principles of plays for his Frankfurt side to handle different types of oppositions. Meanwhile, he also shared the same intense pressing as most coaches from Red Bull teams did. Let’s see whether his back three system could help Frankfurt to achieve more in the second half of the season!