This La Liga season offered a lot of surprises. First of all, no one would have expected that Real Madrid would have so many problems. Especially, in the first half of the season, they struggled to get the win regularly. Therefore, Barcelona only had Atletico Madrid as a real opponent in the fight for the title. Besides Real Madrid’s bad performance, Real Betis have been one of the positive developments. Under Quique Setién they perform well and can secure a Europa League spot. Real Betis are possibly the biggest surprise, however, we shouldn’t forget about Valencia under Marcelino. The team performs consistently and competed almost the whole season for the third seed and therefore the direct Champions League qualification.

Marcelino installed a counter-attacking approach with a compact defensive shape. Their most important offensive player surely is Goncalo Guedes, the young Portuguese who Valencia loaned from Paris St. Germain, who showed his potential and capabilities over the whole season. His skills fit perfectly in the vertical offensive approach of Marcelino.

In this piece, I am going to analyse his strengths.

Goncalo Guedes possesses a lot of high valued abilities. First of all, he is a very quick wing player, his first touch is accurate even at full speed. Furthermore, his dribbling abilities are very good for his age and his shooting technique looks great and is extremely efficient.

When you watch Guedes for the first time you will arguably observe his dribbling skills. In some ways, he is similar to Arjen Robben, with the main difference that Guedes likes to shoot with the right foot and therefore prefers the left wing.

Valencia are most effective when they counter-attack after regaining the ball. Then, Guedes receives space to operate and his speed is fully usable.

In those counter-attacking situations, Guedes rarely dribbles with the ball or plays the passes in the earlier attack. Moreover, he sprints into the open space in order to receive passes from Kondogbia or Parejo. His major advantage is that defenders normally stand still while Guedes comes with full speed. Due to his good control, he doesn’t lose speed while controlling the ball which gives the defender almost no time to stop him.

The follow-up of the scene from above shows Guedes in a 1v1 situation. The defender has to move out of the centre which gives Guedes an advantage. The body position of the defender indicates that he wants to push Guedes towards his left foot. However, Guedes prefers to go right in order to shoot on goal. Due to the movement of the defender, Guedes can easily unbalance him with a simple body feint. 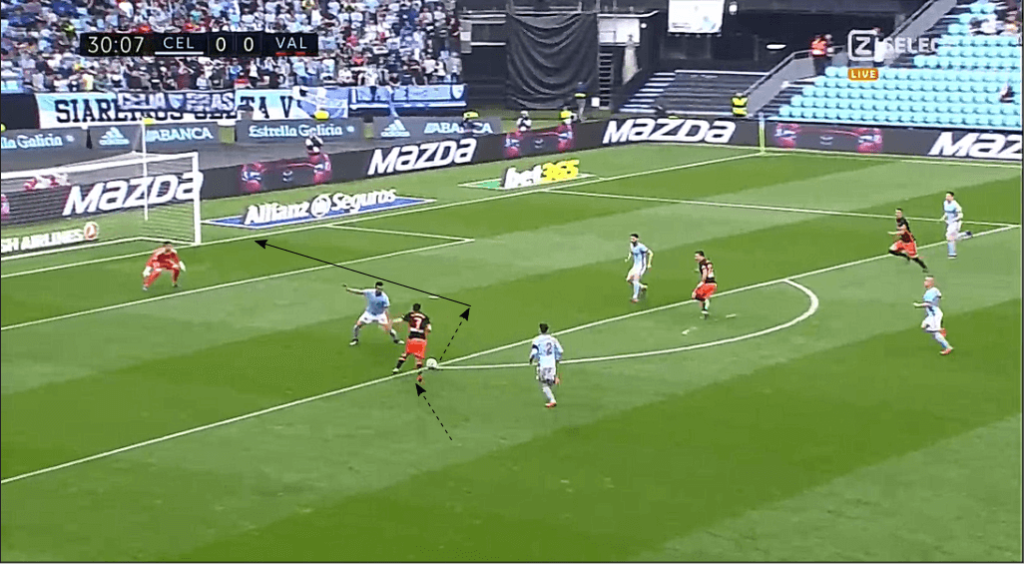 Similar situation, again Guedes dribbles with speed towards the defender. His body feint unbalances his opponent which gives him the slide advantage and the opportunity to shoot on goal.

What makes Guedes so effective in the 1v1 is his ability to quickly change direction. With his body, he shields the ball perfectly and can, therefore, change direction without fearing a tackle by the defender. In most cases, the defender has to foul him in order to get to the ball. Because of his good ball control, Guedes likes to split defenders by changing direction and dribbling between two defenders which sometimes causes communication problems for the defensive team. Another slight advantage for Guedes.

When Valencia can’t counter-attack, Guedes is normally positioned extremely wide to create space for himself. Valencia prefer to attack over the left wing because of Guedes and his connection with left-back José Gayá.

Here, we can see Guedes in his wide position. Barca focused to stay compact in the centre, therefore Guedes receives a 1v1 situation and space on the left wing. In those situations, the intelligent movements of Gayá are important. Not only is Gayá a dangerous threat to the defence but he also opens space for Guedes and prevents him from facing 1v2 situations. 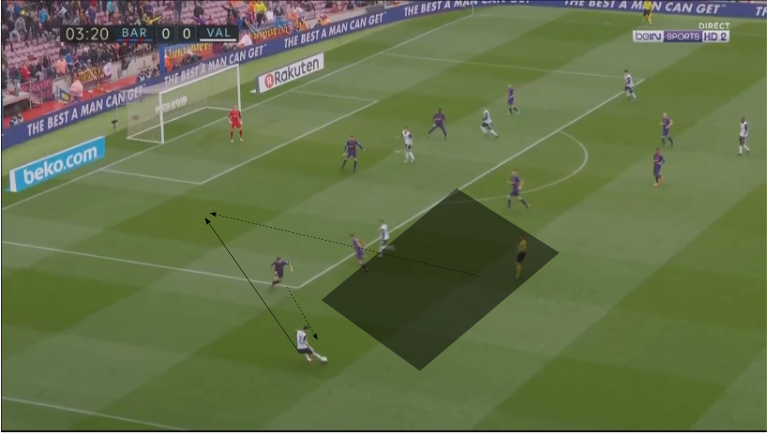 Because of the movement of Gayá, Guedes has two options to choose from. He can either attack the black marked space with dribbling and gets into a comfortable shooting position or Gayá can be involved through a pass behind Barca’s last line.

Furthermore, Guedes moves intelligently without the ball. He is rarely involved in the combination play. He instead moves a lot without the ball in order to appear in open space, from which he can be effective immediately.

Here, for instance, his defender tries to pressure Parejo. The defensive line of Getafe is positioned very high. As a consequence, Guedes instantly attacks the open space. Due to his great first touch, he can control Parejo’s pass and ease by the defender who could only foul him in order to prevent a goal-scoring opportunity.

However, Guedes is sometimes positioned in the halfspace consequently, and Gaya stays wider. Tighter situations in the centre aren’t a problem for Guedes. As I pointed out, his ball control allows him to quickly change direction. Along with his body, Guedes can be effective even under pressure. Besides his dribbling and body, his first touch is also evolving. In the centre, the first touch is really important because it helps you to use open space. Guedes shows potential in this skill area.

Here, Guedes shows that his first touch is decent. He pushes the ball with his first touch in the open space and gives the defenders no chance to stop him from getting into the position to shoot on goal.

Due to his first touch, he now has enough space to shoot on goal. This example is a perfect illustration of his shooting technique. The ball starts to rise early and then falls quickly, aiming at the left bottom corner. However, ter Stegen was in the right spot to deny the goal.

Indeed, Guedes possesses a perfect shooting technique. The example from above is only one of a bunch in which his shot is hardly calculable for the goalkeeper. Most of the time the ball rises and then falls quickly like a rock. That shooting technique called the knuckleball is prone to mistakes. If you hit the ball the wrong way, the ball will massively fail to hit the target. However, when it works, those shots are extremely hard to stop.

What makes Guedes so valuable is his vision. Compared to other dribblers Guedes possesses a high intelligence and can pass the ball in the right space even in chaotic counter-attacking situations. Especially his quick understanding of situations and his overall view of his teammates lets him easily play passes in even the tightest situations. 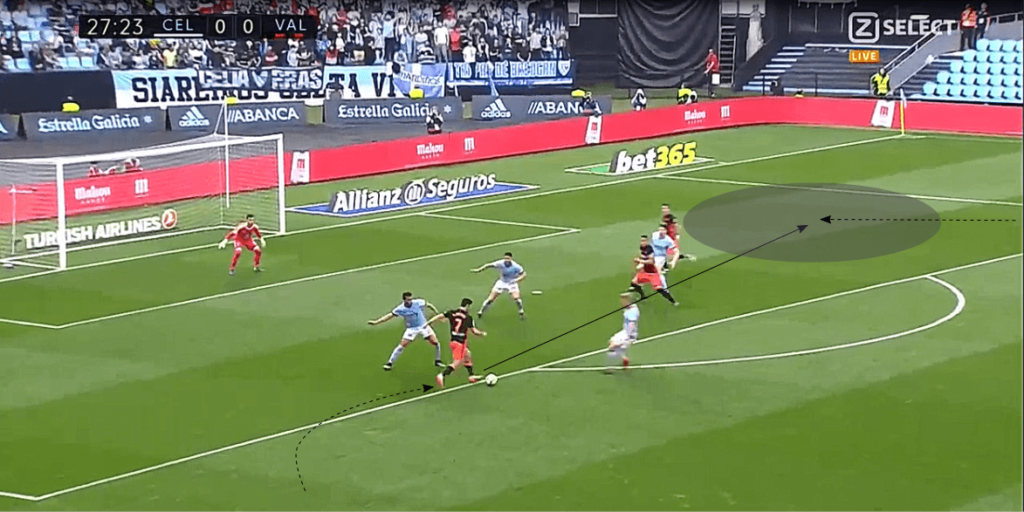 Here, Guedes cannot shoot on goal. One glimpse is enough for him to realize that there is available space on the far side. His pass is also perfectly timed. As a consequence, his teammate, who moves in the grey marked space, has a free shot on goal. 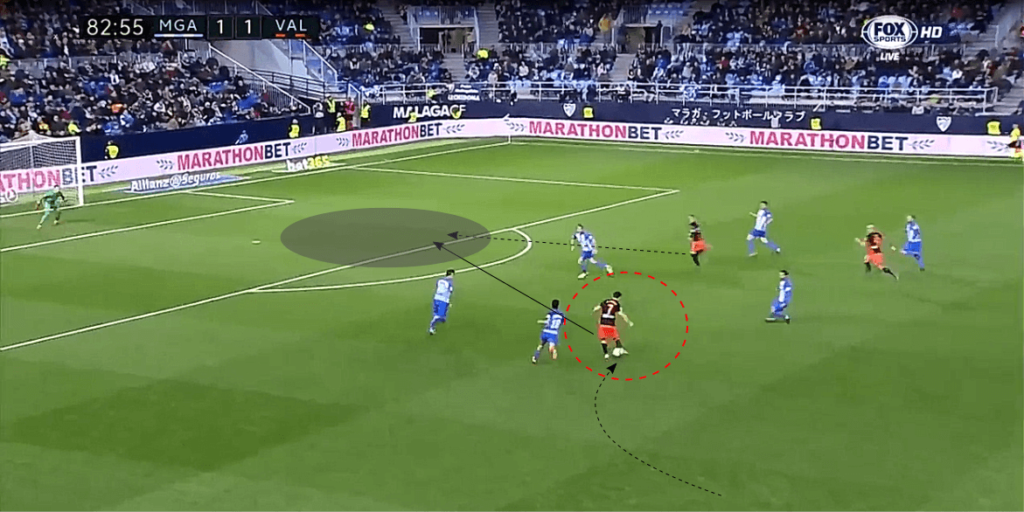 Again, he starts from a wider position which draws the defenders to that side, his quick cut into the middle gives him the possibility to play the through-ball to his teammate.

His passing vision is not yet elite. Nor is his understanding of dynamic perfect. In a lot of counter-attacking situations, he plays the pass either too late or too hard. However, the fact that he sees those passing options shows that his game intelligence is decent and can evolve in the future with more experience. Especially, when his gravity draws defenders towards him, the ability to pass the ball in the available space is important to fully use the advantage of his gravity for the team.

Goncalo Guedes is one of the crucial parts of Valencia’s successful team this season. His dribbling and shooting abilities help him to be a constant threat to the defence. It sounds like Guedes wants to stay at Valencia and not return to Paris St. Germain. Clearly, at Valencia, he will be an important player next season, which will help his development hugely. However, if he progresses like this season in the future, Valencia won’t be the team at which he stays for the rest of his career.