There is a sense that the balance of power is shifting away from Olympique Lyon Feminin from being the ultimate powerhouse club. The first semblance has come in France where Paris Saint-Germain Feminin are closing the gap, which was showcased in their win against Lyon in November. The only goal of the game was scored by Marie-Antoinette Katoto who has flown under the radar for much of her young career.

The French striker has been PSG’s talisman for the last two seasons, scoring 30 plus goals in 2020 already. This upturn in form comes at a time when the UEFA Women’s Champions League is as open as it ever was and Katoto is our tip to be one of 2021’s breakout players.

This scout report aims to elaborate and explain why Katoto is one of the brightest young players and how she can be Paris Saint-Germain’s talisman.

Marie-Antionette Katoto is a 22-year-old centre-forward with all-round capabilities. She is a naturally talented player whose main role is to score goals but also to supplement the attacking talent around her. She possesses the traits of a complete forward with the ability to create chances, bring others into play, and score goals. Katoto is a very accomplished player at 22, has been clinical both domestically and in Europe and has shown a composure unrivalled by many.

As a complete forward she is able to drop into space, link play and bring other attackers into action but is equally proficient at holding up the ball and even making runs off the shoulder of defences. Having a vast repertoire of skills only makes her more unpredictable and flexible when it comes to slotting into different systems, whether it be for Paris Saint-Germain or France.

A closer analysis will reveal that both Katoto and Ada Hegerberg play similar roles so there is a comparison that is made between the two players. However, Katoto’s play style and clinical finishing is getting to a level rivalling the Norwegian forward.

The biggest asset in Katoto’s skillset is her movement and positioning. This is the basis of her game and one that allows her to bring teammates into play and score goals. More often than not, Katoto will position herself centrally and move based on the build-up patterns. PSG use their wide players effectively and will often use them as a source in the first phase of play. In other cases, the central midfielders, namely Sara Däbritz, will play through balls down the channels for Katoto who will make smart movements across. A feature of her movement is down to her intelligence in making the right moves. Short, smart movements make Katoto unpredictable and it is here where she brings in her hold-up and link-up play.

Though Katoto plays as a sole striker in PSG’s 4-3-3, having a good understanding with the midfielders and wingers becomes extremely important. Both Kadidiatou Diani and Nadia Nadim both cut inside and play more centrally, which means there is space for overlapping full-backs in Perle Morroni and Ashley Lawrence available to cross. Centrally, Däbritz and Geyoro will supply the wide players but if the opportunity arises, will play passes centrally. Given these circumstances, Katoto needs to be alert and smart given the different angles of passes and crosses that are open to her. 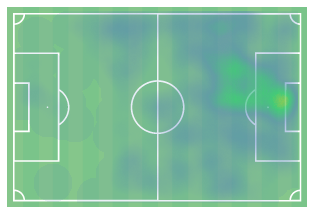 This heat map indicates Katoto’s general movement patterns and you can see how she’s prevalent in both the box but also the areas outside. There are traces of activity in both deeper and wider areas of the pitch which supports the notion of her being a partial deep-lying forward. Having said that, let’s look at an in-game example to further portray her skill in this regard. Katoto understands space and timing very well which shows in a lot of her goals being headed or through ball goals. These require shorter, smarter well-timed movements but most importantly she’s able to take defenders out of the equation, making the ball much easier to attack, as is seen below. 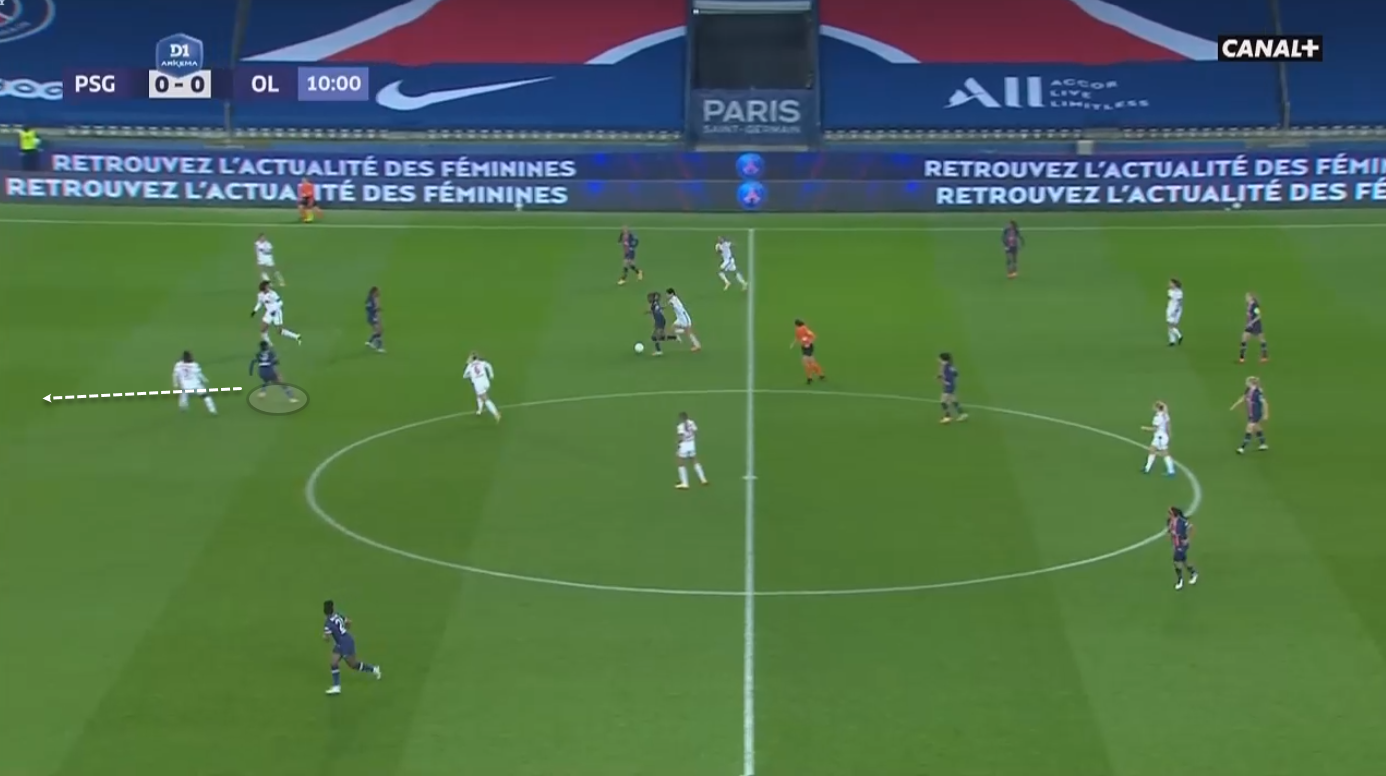 Here, Katoto drops deep when Lyon are attacking but once PSG regain possession, she positions herself in between both Wendie Renard and Kadiesha Buchanan. The through ball from Grace Geyoro triggers Katoto to make the run which is perfectly timed and leaves the centre-backs behind, putting her in a 1v1 against goalkeeper Sarah Bouhaddi.

These traits also supplement her to get into good goal-scoring situations or assist opportunities. This puts her into a position to get into 1v1 positions which brings her dribbling skills into play. Katoto is able to get past defenders with ease despite her height. She has averaged 3.81 dribbles per 90 so far with a 67% success rate which shows her all-round capabilities. A complete forward is one who has incredible off the ball movement but also sharp movements on the ball. Katoto can break lines and get on the end of crosses or on goal. Her ability to create something out of the chances presented to her is good and that comes from her spatial awareness. 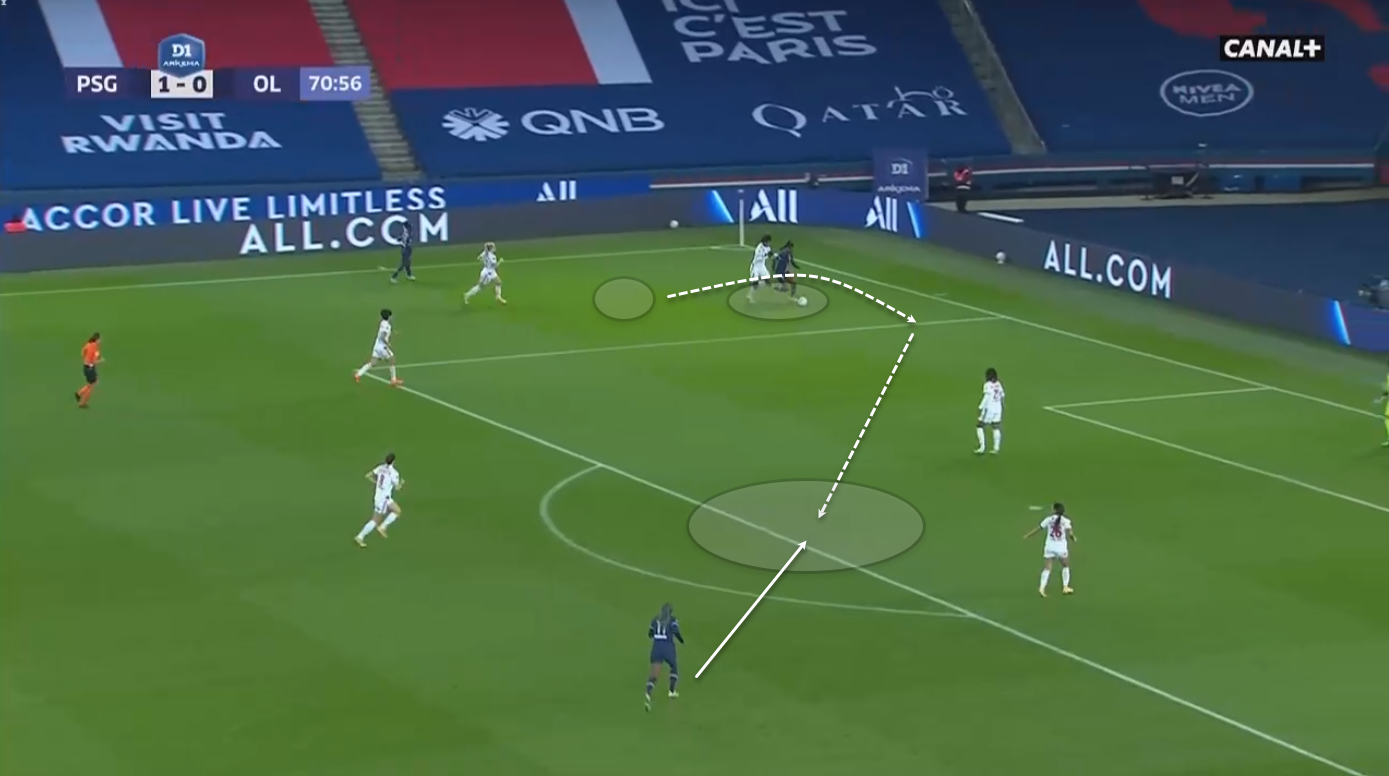 This example here shows Katoto in a wide area and how she manages to find her way past the centre-back. She starts off behind Renard but uses quick feet to knock the ball past the defender which puts her in the box. From here Katoto can drive forward and find a pass to Diani.

Another weapon in her repertoire of skills is her chance creation ability. Part of her role includes dropping into pockets of space that involves linking and holding up the ball for their midfielders. PSG’s tactics involve a lot of inverted movements from the wide players that means Katoto needs to drop into a No. 10 position to open up space up front.

It also involves onrushing central midfielders making runs in behind, so she needs to be proficient in keeping possession and strong in duels to cope with aggressive defenders and midfielders. Obviously, positioning is a key trait which Katoto has and this enhances her ability to play in these players. We’ve seen through the heat map above how Katoto isn’t confined to the box and will drift into the deeper and wider areas of the pitch.

Her movement drags defenders away and, combined with her strength, can occupy multiple defenders which ultimately gives more space to other attacking players. Especially for PSG, we know that Diani and Nadia Nadim prefer to drive into the box and combination play with them makes the front three unpredictable in their positioning.

Katoto’s movement can also play in the full-backs by moving centre-backs out of position. If they receive the ball quicker, then it makes crossing into the box much more dangerous because of the numerical overload with 3-4 players rushing in and defenders out of position. The image below depicts her movement, positioning and link-up in one exchange. 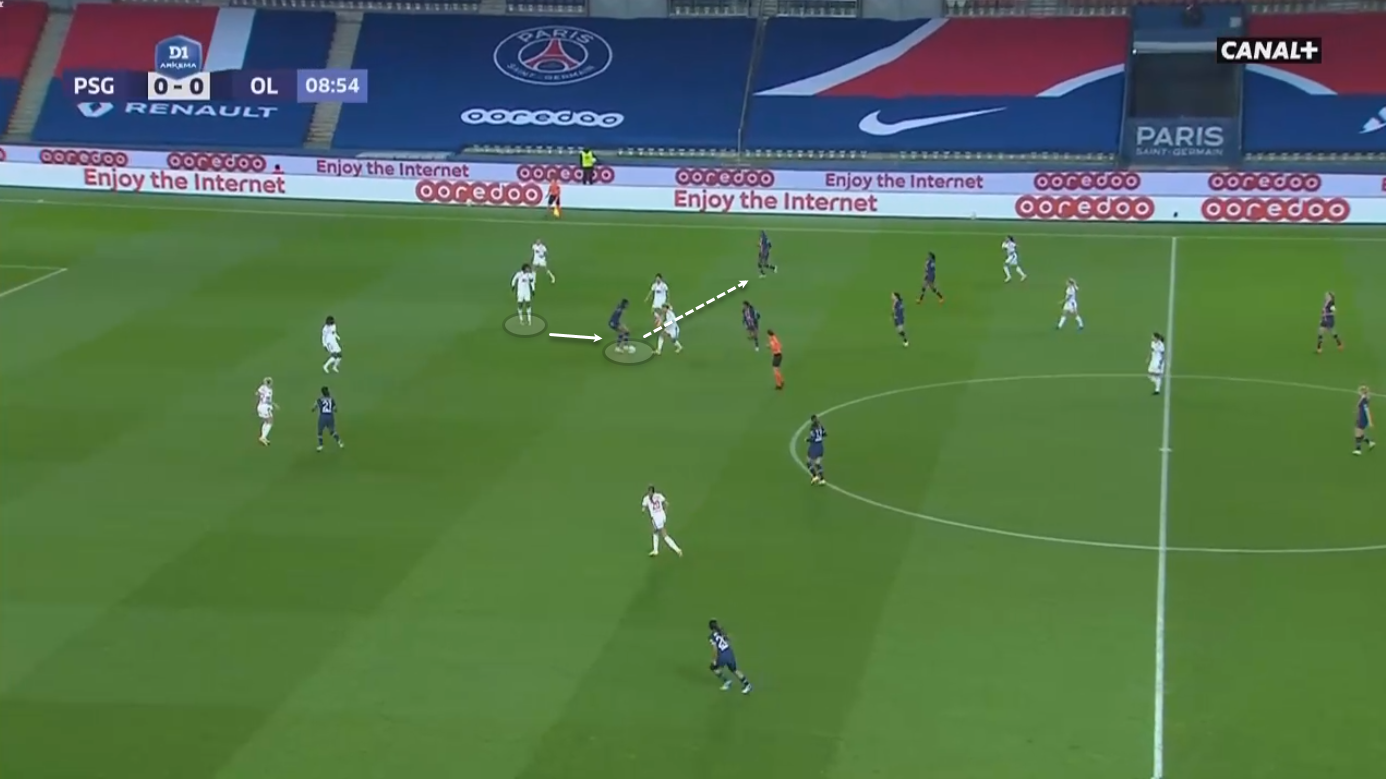 Here, Katoto drops into space deeper, which attracts Renard slightly out of position but also prompts the midfielders to press her. In this move, she relies on her quick feet to manoeuvre out of the press and passes it out. 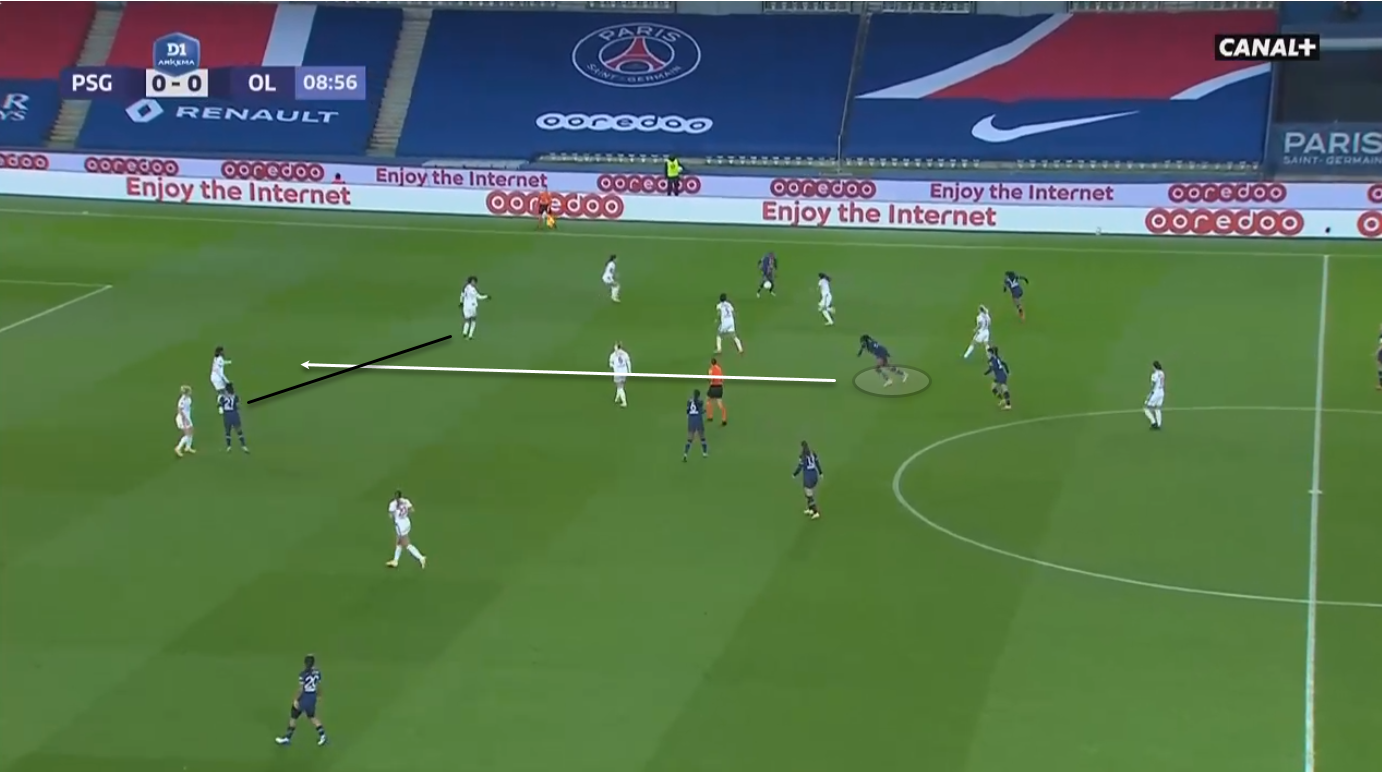 Here, Katoto has passed the ball out wide and has now created a gap between centre-backs which she can exploit by making this deep run which makes it more difficult for Lyon to track. Their focus is on Diani which gives Katoto space and time to operate. It is this link-up play that enables Katoto to not only create space but opportunities to allow other players into goal-scoring positions.

In this example, she carved open an opportunity but it could easily be used by another player in a similar area. What this also indicates to us is her hold-up play is a tool she uses in combination with what we’ve talked about earlier. Being able to hold the ball well means she can not only link play but also allow for runners to run in behind.

So we’ve seen how Katoto can link play together to create openings and chances but it’s not only with her movement but her on the ball skills. Her game is based on movement and positioning and her link-up play is a major part of it. While we’ve discussed how she plays with her back to goal and quick interchangeable passes, Katoto has a decent passing range in the final third.

She can cross and play through passes into the penalty area which comes from dropping into the No. 10 position that opens space for the two wide players to cut inside. Players of this ilk often have nimble footwork and develop a great relationship with the midfield, especially ones who play as narrow wingers or aggressive No. 8s, depending on the formation used. At Paris, Däbritz, Diani and Nadim overload the box when Katoto occupies defenders and midfielders. 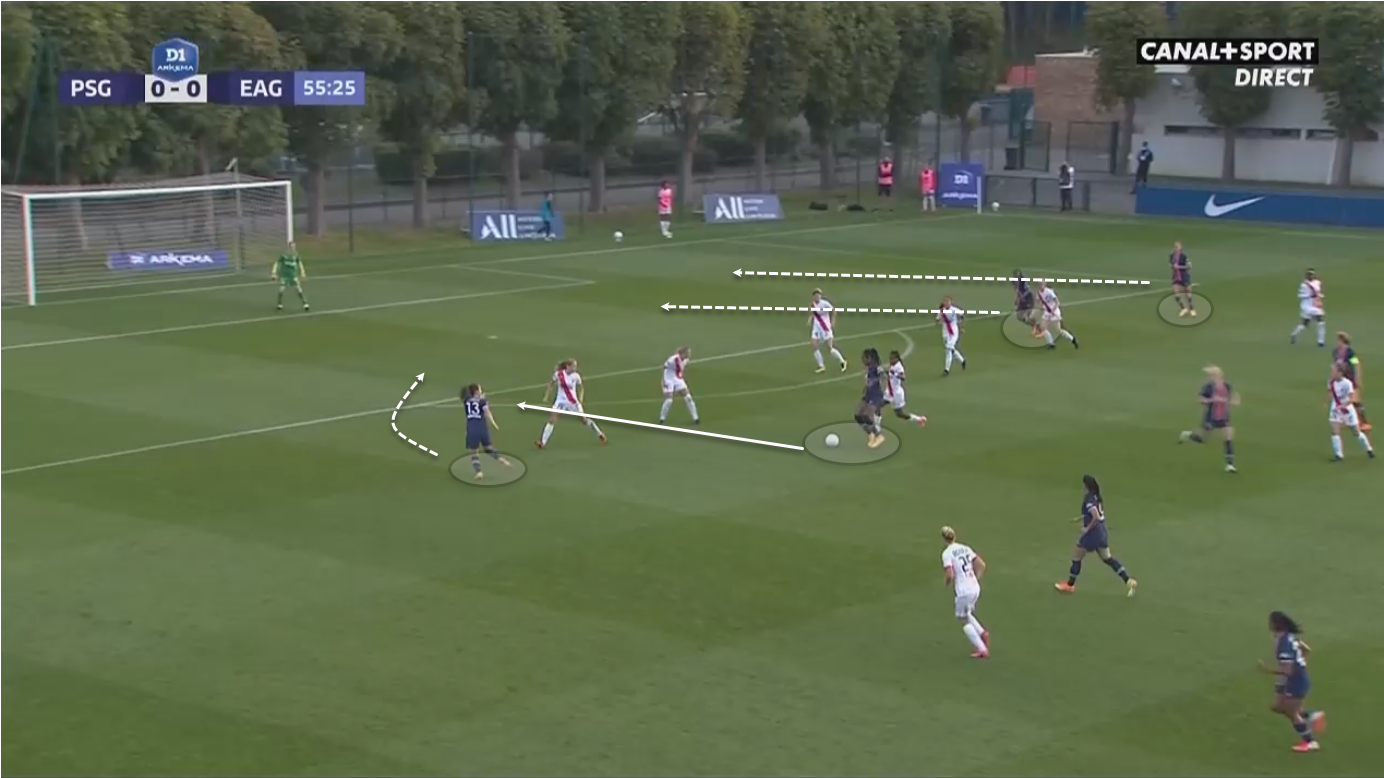 This example illustrates the point we’ve made. Katoto has dropped deep and is in possession of the ball with Däbritz, Diani and a third player ready to run in behind the compact defensive line. Katoto spots Däbritz’s run and passes it through the defensive line. If you notice, all the defenders are solely focused on Katoto, which gives Däbritz half a yard and second to run on to the ball. This can result in a shot or cross for the other players to run on to. The Parisian striker averages 1.72 passes to the final third per 90 and 2.29 passes to the penalty area per 90, both with a 62% or above success rate.

The numbers are quite high for a striker given how much time they spend in wanting to be in and around the box. The 60% success rate is particularly impressive given how teams will be looking to mark her closely but most importantly it illustrates her in-game intelligence. If there’s anything we’ve learned from her game so far is that Katoto is intelligent both on and off the ball and making the right decision in high pressure situations becomes vital. It’s little wonder she has scored 20 plus goals since the 2017/18 season which also points to her consistency.

2021 presents an opportunity for women’s football to further bolster its reputation with arguably its best season yet. The quality of teams has improved radically and the investment made in clubs around Europe, especially in the FAWSL, means the UEFA Women’s Champions League may see a new champion come May 2021. This tactical analysis aimed to showcase and explain why we think Marie-Antionette Katoto will be the next breakthrough star in women’s football with her incredible goal-scoring record and all-around ability.

The numbers speak for themselves and with Hegerberg still recovering from injury, there is a chance Katoto can stake her claim as the best in France by leading Paris Saint-Germain to a domestic title. However, conquering the holy grail that is the Champions League will surely propel her to the masses and possibly take a few steps in closing the gap to Olympique Lyon.