Over the weekend, the BayArena hosted a battle between first and second place in the Bundesliga; Bayer Leverkusen against Bayern Munich. This tactical analysis will take a closer look into both side’s tactical setups, and why it ended up as a victory for the away side.

Leverkusen, led by Peter Bosz, had enjoyed an unbeaten start to the domestic campaign before this match, leaving them in the lofty position of first place in the league. Bosz’s flexible tactics have allowed Die Werkself to adjust to their opponents accordingly so far this term, and this analysis will break down how they set up here.

Bayern Munich, managed by Hansi Flick, have shown their vulnerabilities in the past few fixtures, most recently against Union Berlin, where they struggled with their direct style of play. In this analysis, we will detail how they grew into this game over time, and what approach they took with a new-look midfield. 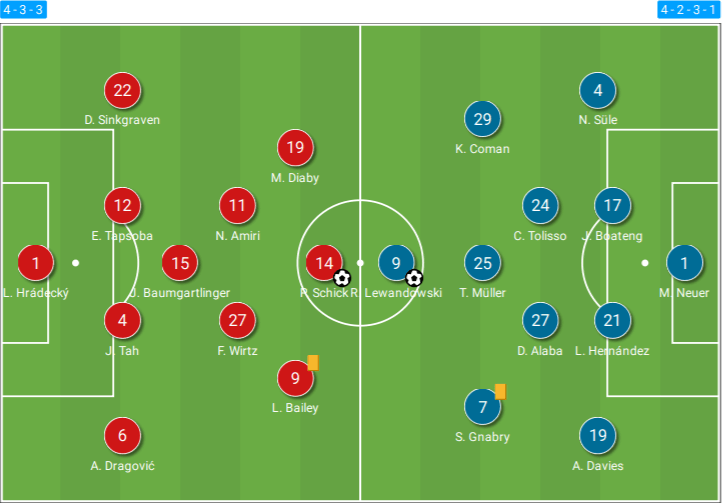 Bosz has been contending with injuries in the squad since the start of the season, but more recently we have seen Exequiel Palacios, Sven Bender, and Lars Bender succumb to injuries, which has seen the likes of Dragović get starts at right-back and Baumgartlinger as a deeper central midfielder. In this game, they stuck with their tried and tested 4-3-3, but Lucas Alario was a notable omission upfront.

Flick recently lost Leon Goretzka to injury, and in their last game versus Union, former Chelsea graduate Musiala did not suit a deeper midfield role. Owing to this, we saw Alaba operate as the left central midfielder here, with Tolisso as his partner, since Joshua Kimmich is still recovering from his meniscus tear. Another noticeable change was the reintroduction of Süle as a right-back, instead of Benjamin Pavard.

Another slow start for Bayern

Leverkusen began this game in a 4-3-3 formation, which would switch to a variant of a staggered 2-4-4 in possession, where Wirtz would join the attacking line, while Amiri and Baumgartlinger would form a midfield partnership with Sinkgraven and Dragović flanking either side.

In the build-up phase, this can become a back three, with one of the full-backs dropping deeper to provide a platform for ball progression. In these scenarios, Leverkusen would try to play more vertically and break the lines with more urgency. 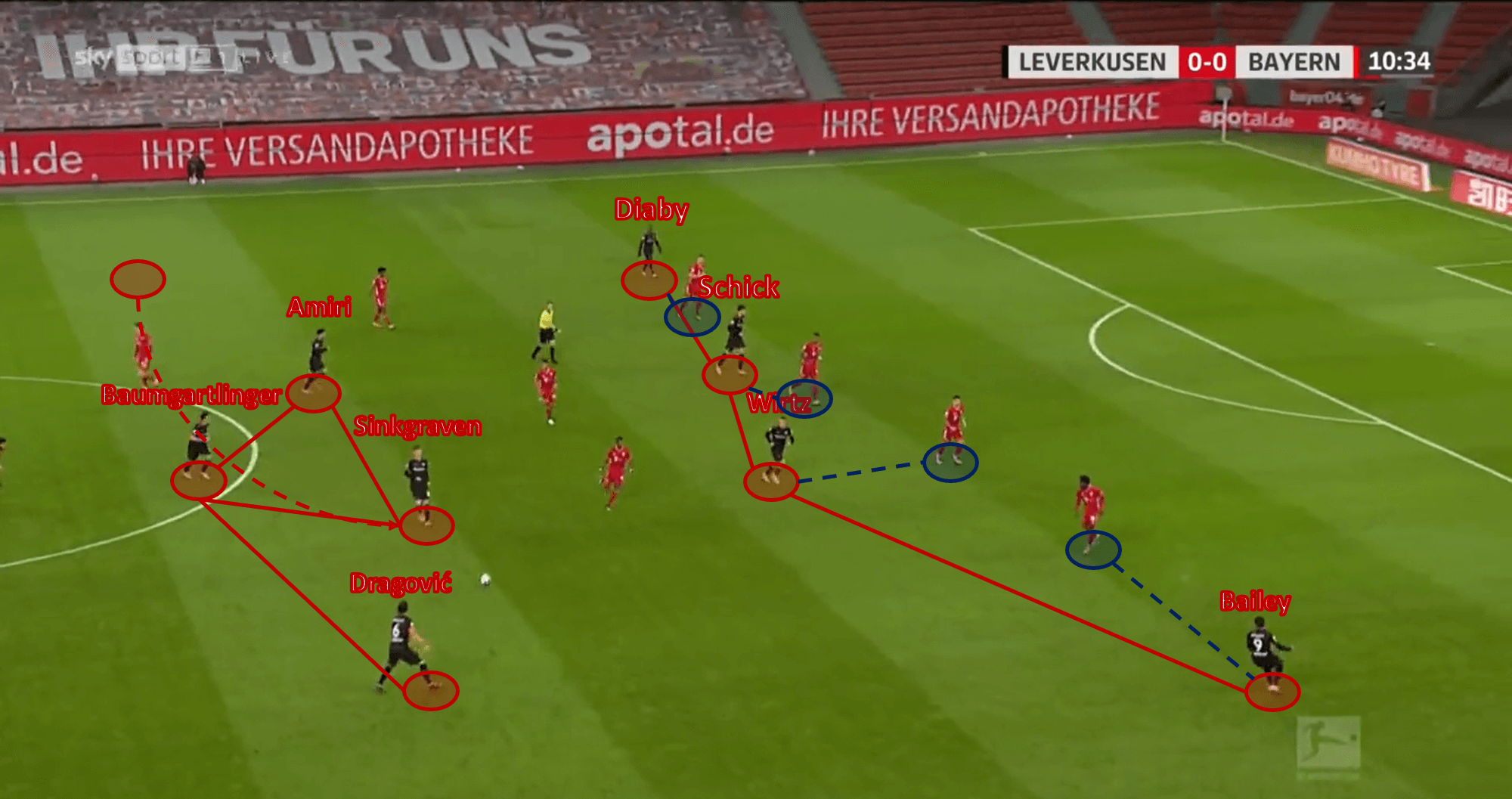 From a wider position, Sinkgraven has joined the midfield three, with Dragović flanking wide. A four-man band has been created in the attacking line, with Wirtz operating as a second striker next to Schick. 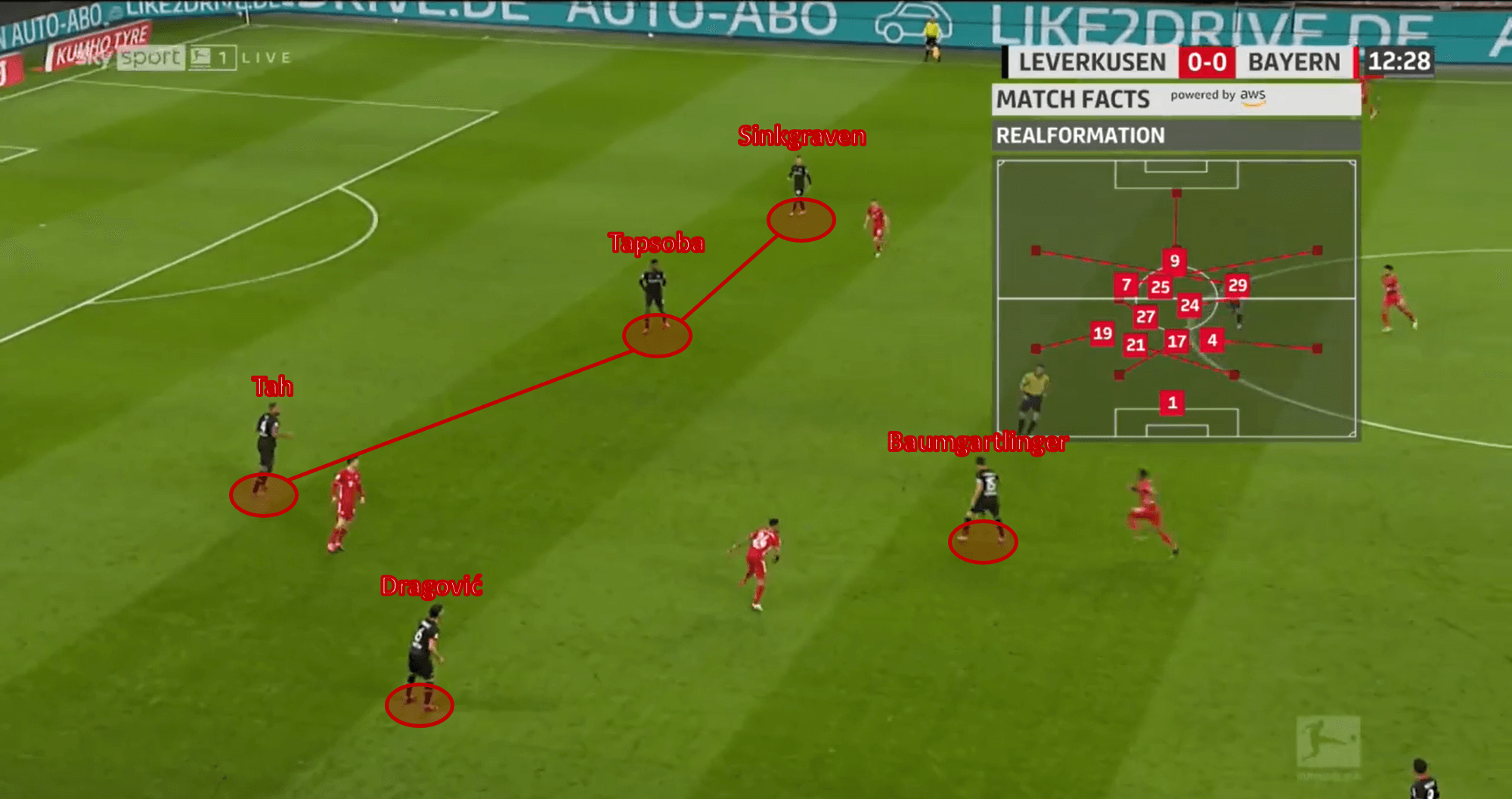 Sinkgraven here has joined the back two to form a back three, where he can provide a passing option to either of the centre-backs or the goalkeeper.

From the back, Leverkusen were atypically direct and vertical in their passing approach. Adding to this, Tapsoba was the outlet in this regard as per usual, with the Burkinabé attempting 19 long balls, completing a stellar 16 of those efforts (84% success rate), which was incredibly useful in this match.

Last week, versus Union, Bayern struggled with their direct play combined with their pacey forwards, and Leverkusen exploited this weakness early on. Tapsoba would collect the ball and immediately look to play it towards one of the attacking players who was dropping deeper to collect the ball and combine with another forward. Tah, when preferable, would also attempt these long balls as well. 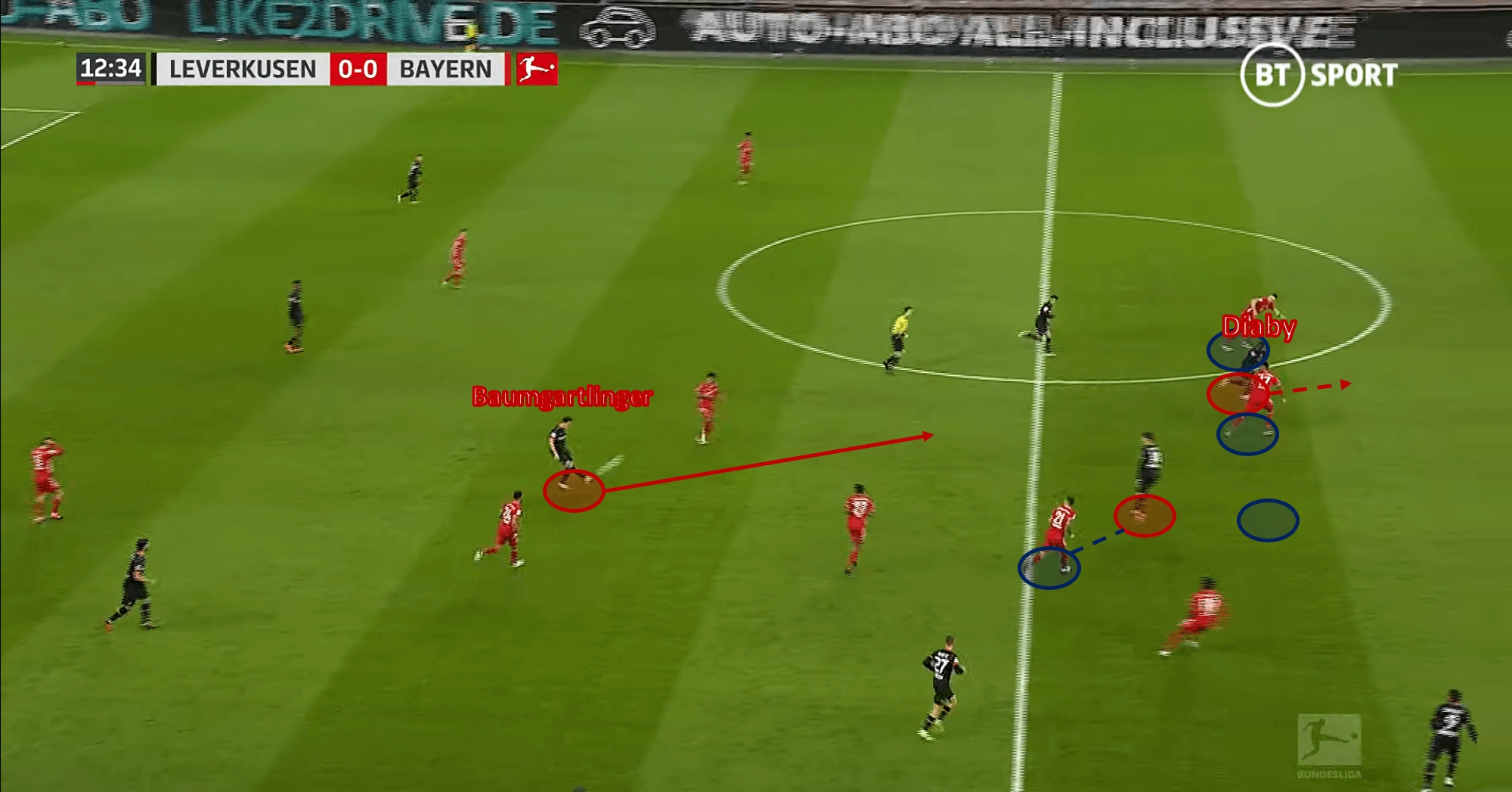 Baumgartlinger collects the ball inside his team’s half and immediately looks to play Diaby in behind, who has found a gap between the two centre-backs to exploit. 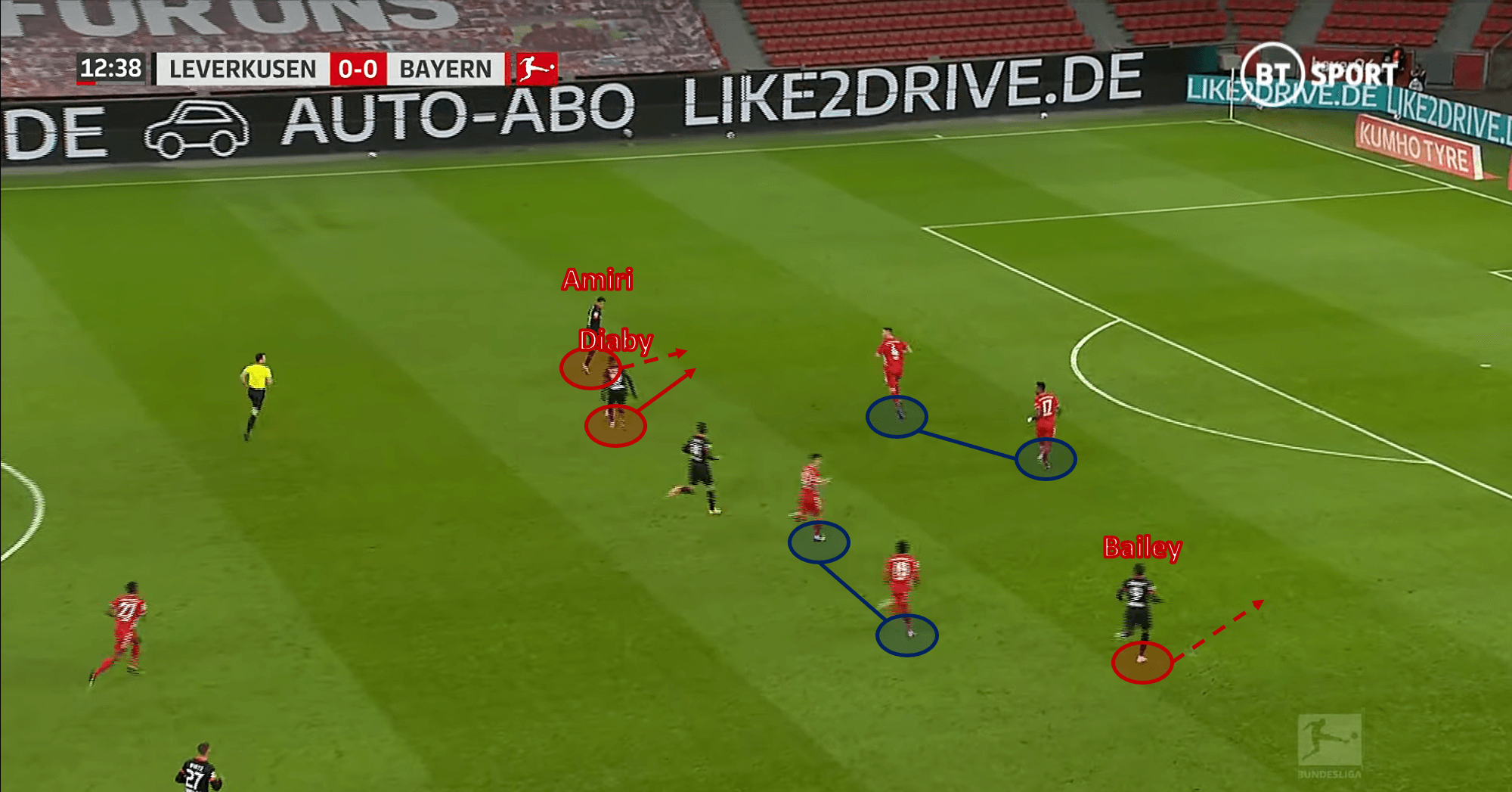 Diaby picks the ball out of the air, and away from the two Bayern centre-backs. A clear pattern of play could occur here, with Amiri running with the ball out wide, and looking to find Bailey at the far post thanks to Bayern’s narrow defensive structure.

Though these attacking patterns of play were apparent throughout the first half, especially after around the 14’ mark, none of them created chances of good value. Across the entire ninety minutes, Leverkusen did not create a chance which eclipsed an xG value of 0.09. Once they reached the final third, they were often reduced to taking potshots, thanks to Bayern’s numerical superiority in these areas generally across the game.

Leverkusen’s main error was not exploiting the wide spaces enough in this game. They did not take advantage of Davies’ high positioning on the break often enough, and it was a common occurrence to see Bailey making the run beyond the defensive line on the right-wing, but the ball would never reach him. Given the Jamaican’s current form, this was surprising to see and wasteful on behalf of Bosz’s men for sure.

Bayern’s use of wide areas

While Leverkusen struggled to exploit gaps in wide areas, Bayern did not. Their greatest opportunities were carved out of interchanging positions in the build-up and the final third, to create space and chances on goal. They had to adjust their attacking approach in this game given their starting right-back, Süle, is not adept at roaming forward, and it placed heavy emphasis on Davies providing width in the attack. 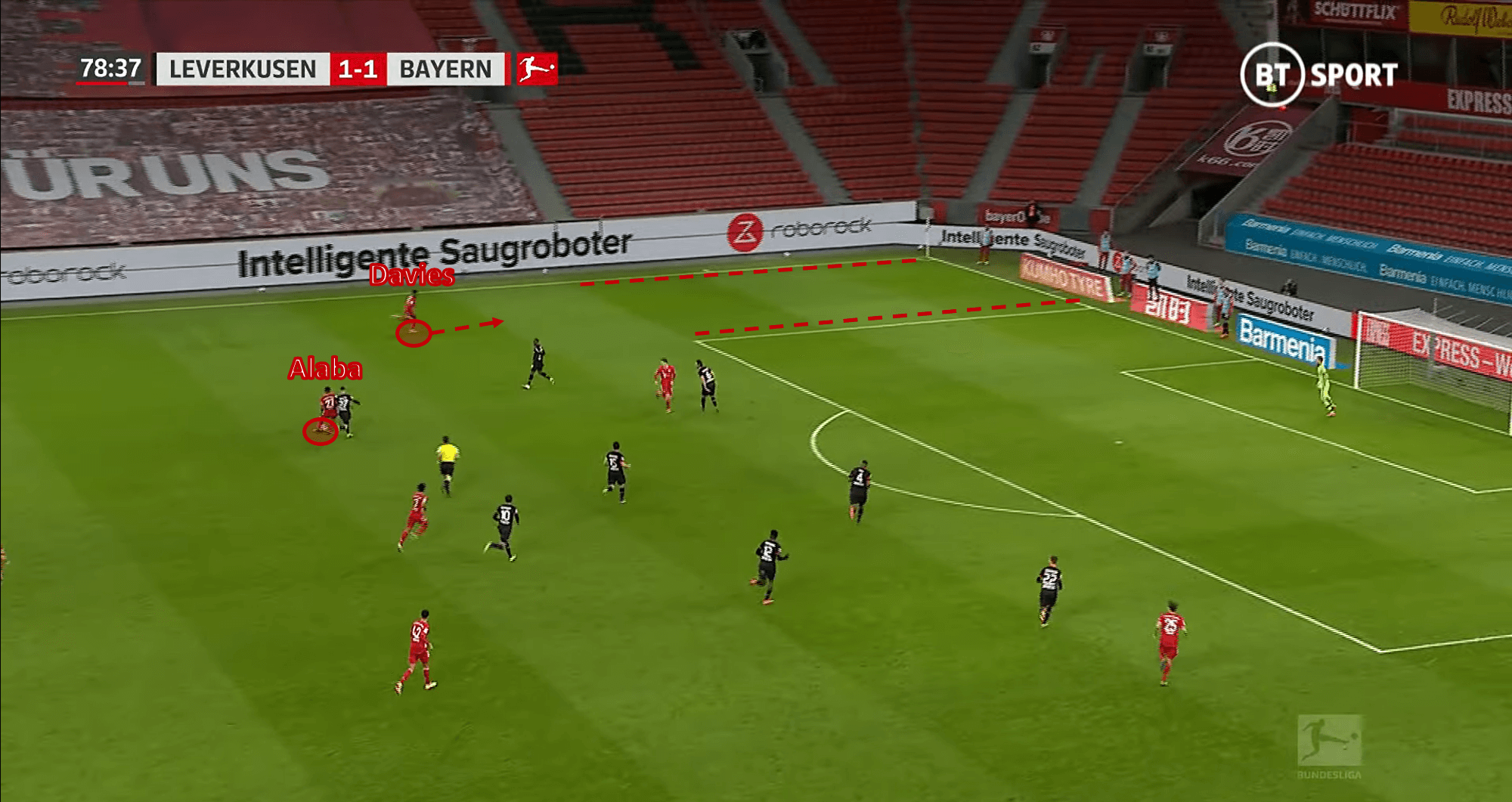 Davies would push up higher to stretch the opposition’s defence, plus his skill in one-on-one scenarios is destabilising.

Flick’s men would build up through central areas since they formed a back three in possession. This meant their formation looked more like a 3-2-4-1, with Müller occupying the right-wing space in attacking situations often. As with any game Bayern play, they concentrate their attacking efforts around their focal point, Lewandowski, creating space for him as and where they can. 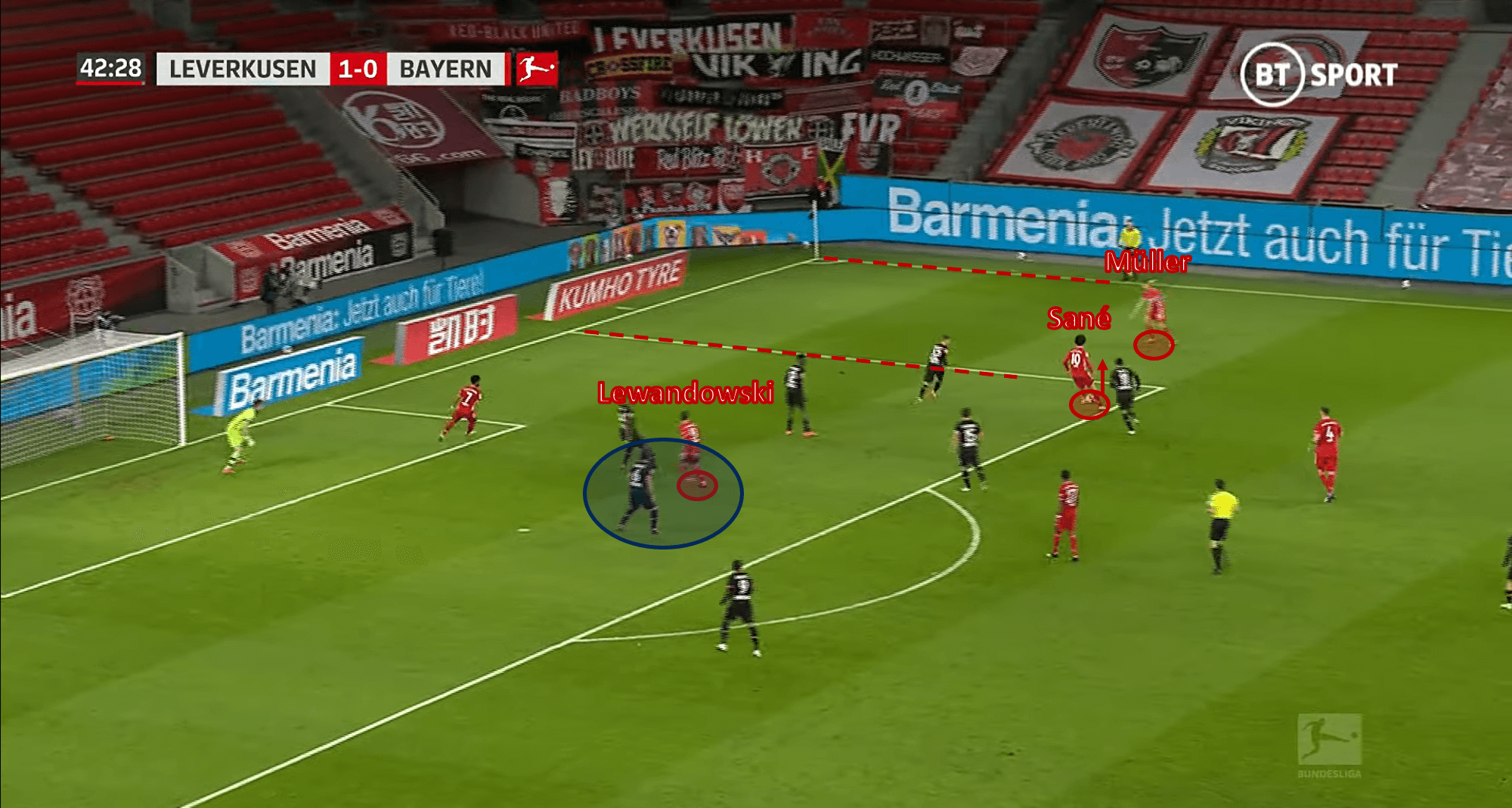 Down the right-wing, Müller is calling for the ball to be played into feet so he can send in a delivery towards Lewandowski. 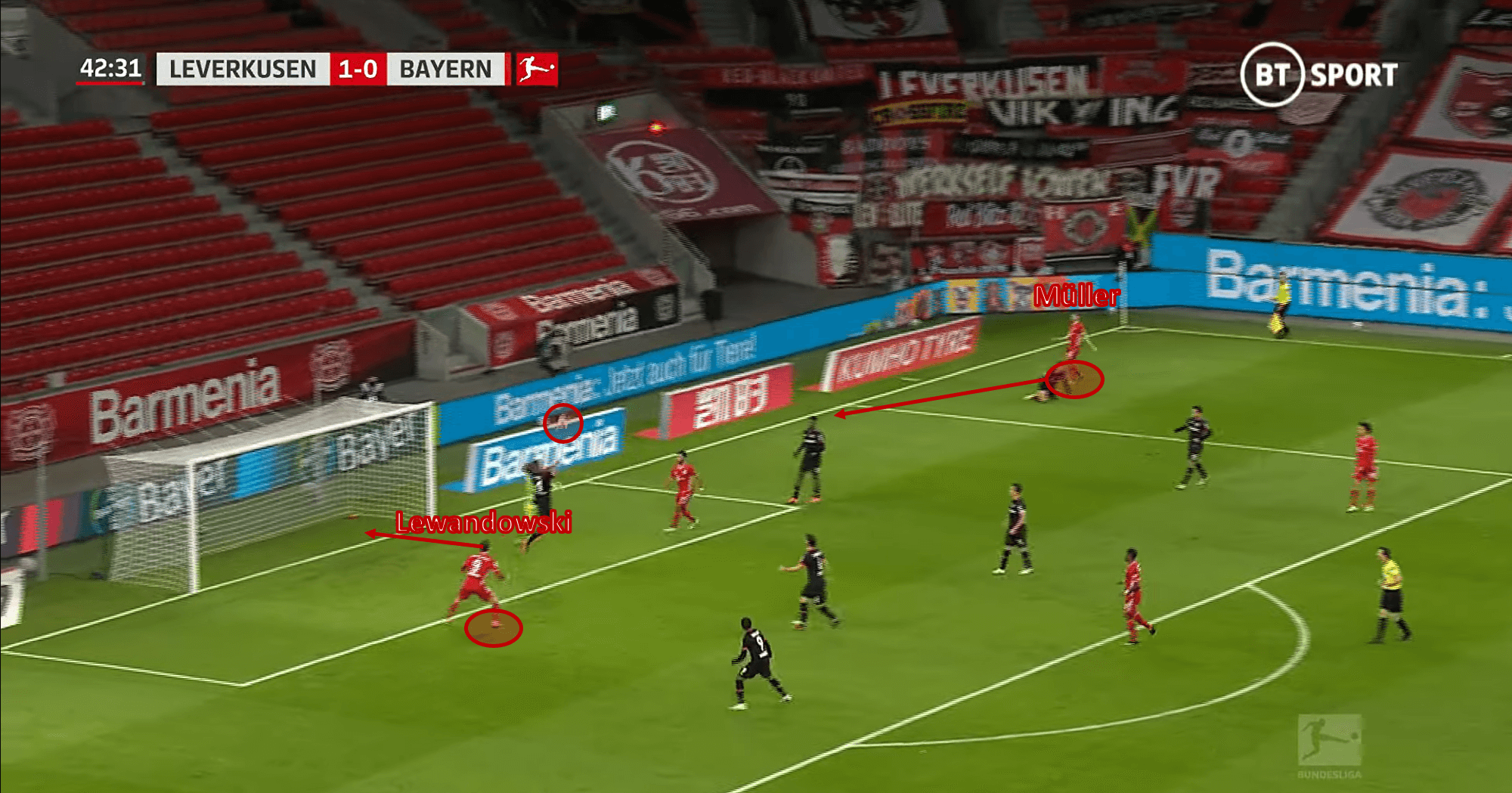 Müller hits a lobbed cross over the reach of Hrádecký, which lands perfectly on Lewandowski’s head, to make for an easy open-net finish.

Bayern also created a decent proportion of chances from wide areas via set-pieces. Again, in these situations, they are aiming to create space for the Polish striker, so that he can grab a headed opportunity on goal. 29.5% of Bayern’s xG in this game was generated via set-pieces, with three shots of great value coming as a result of wide free-kicks and corners. 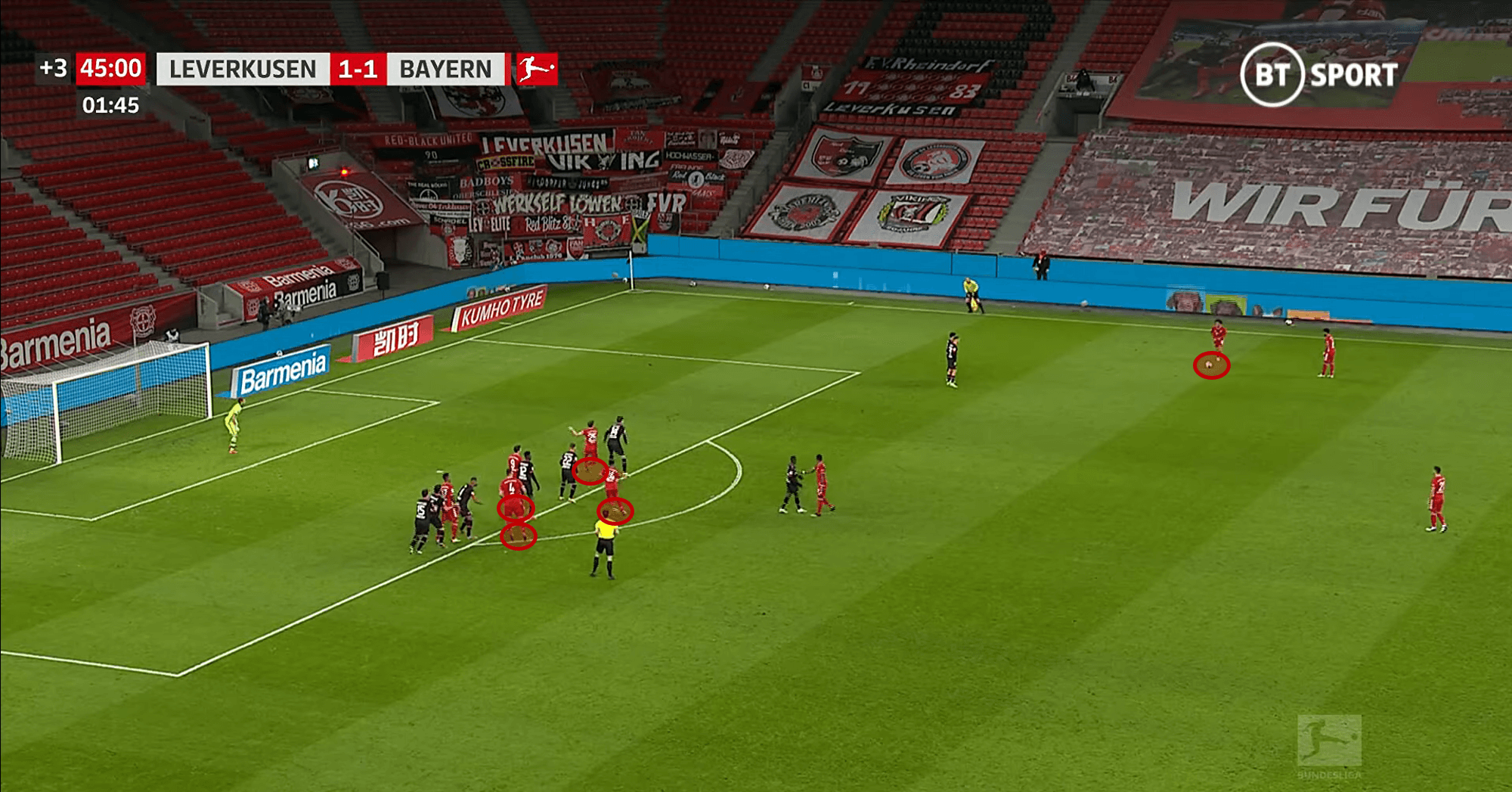 Leroy Sané, stood over the free-kick, is looking to send in an inswinging delivery, aiming somewhat towards the near post. 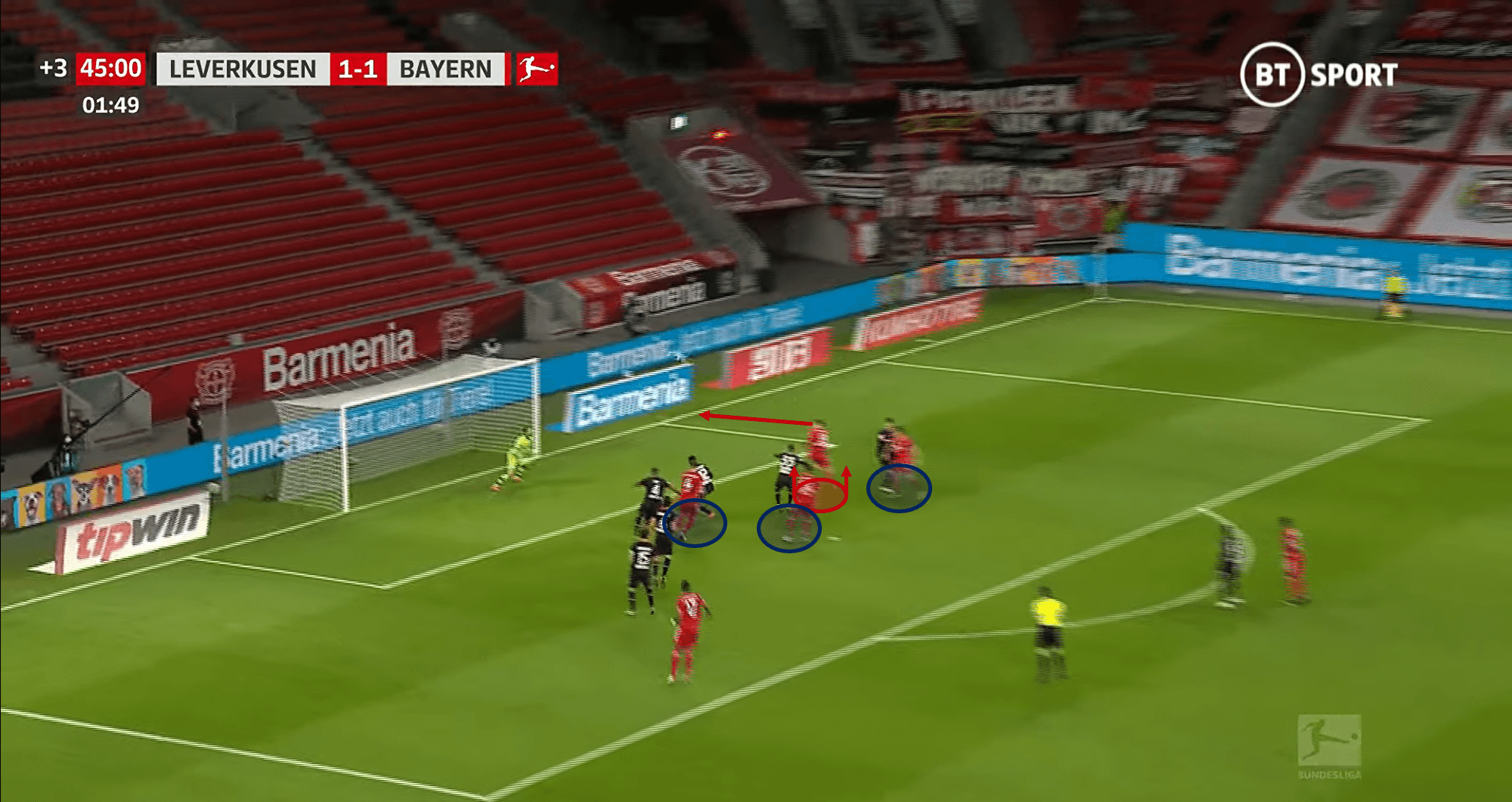 Three Bayern players have made runs to draw defenders away from Lewandowski approaching the six-yard box, and manage to take a shot on goal.

Lewandowski managed seven shots in this game, and this was in large part due to his excellent movement, but his teammates also helped him tremendously. His physical stature helped him keep his distance between himself and Leverkusen’s centre-backs generally, but in fast counter-attacking scenarios, the movements of Gnabry, Sané, and Müller were useful in creating separation between Lewandowski and his opponents.

As mentioned earlier, in this game, Leverkusen took plenty of potshots, meaning a lot of shots from outside the area, or from tight angles. In a few of these scenarios, if they had continued to pass it around Bayern, or had attempted the killer pass more often, they could have carved out higher-value opportunities. Instead, they took a lot of long-range efforts, and Amiri was particularly culpable of this, despite all of his great work off-the-ball. 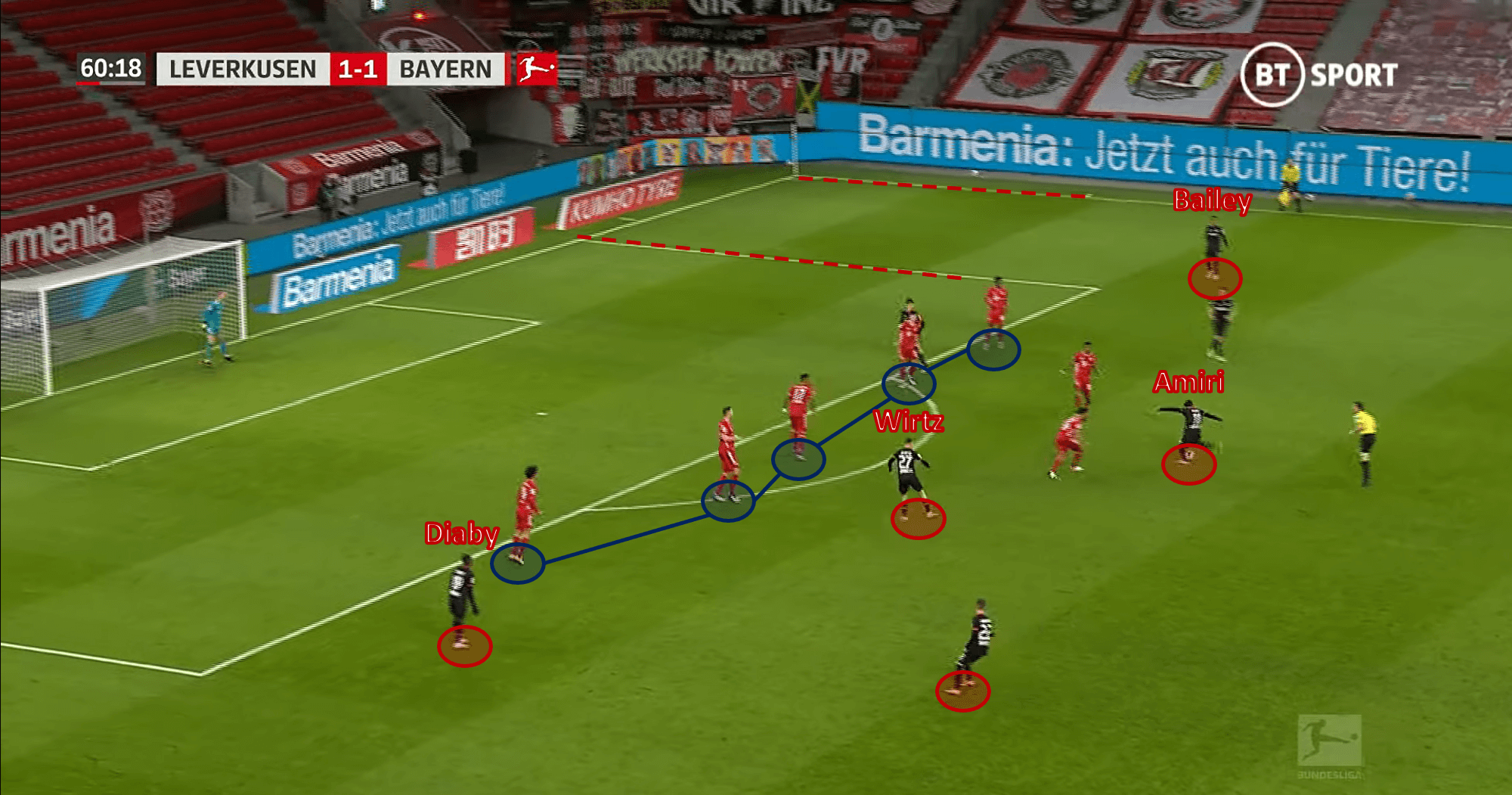 Here, we see Amiri begin to take a shot on goal, but look at some of his passing options. He could potentially play a one-two with Wirtz or use one of Diaby or Bailey in space down the flanks.

Their decision-making in the final third, simply put, was not good enough. They only managed eight shots in the entire match, and credit to Flick’s defensive setup in that regard. His rearguard were set up in such a way that they were able to operate in a deep block and counter-attack at pace in one swift motion, mainly thanks to the pace of Davies and some of their attacking players.

Towards the end of the game, where Bayern were desperately piling on the pressure to score the winning goal, they looked to make the most of some of Leverkusen’s individual errors. There were a few memorable scenarios in the match where Leverkusen lost the ball in their half, either due to sloppy execution of their passes, or Leverkusen set off a pressing trigger for Bayern where they would press more intensely. 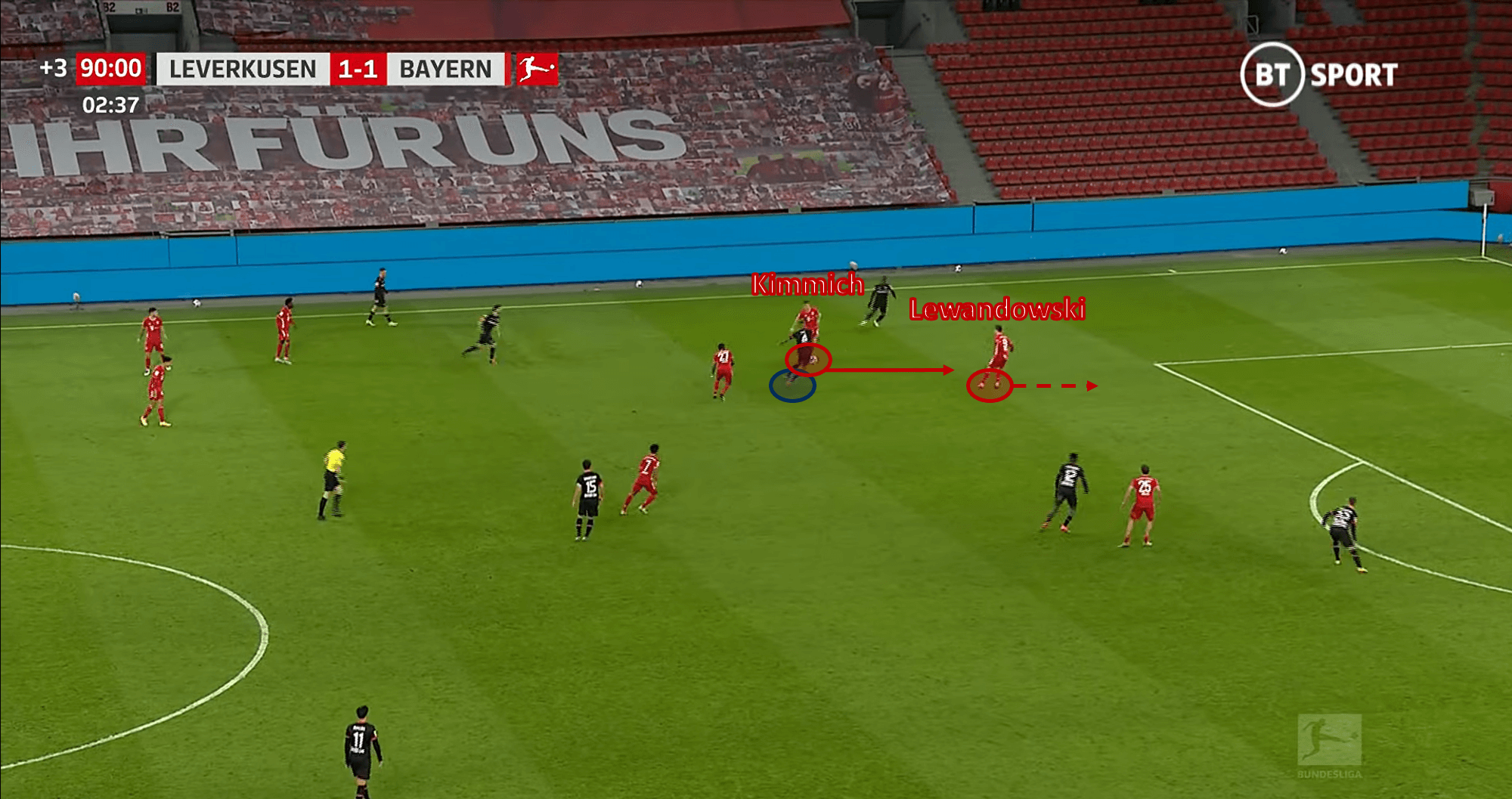 Tah loses possession after a sloppy first-touch, and Kimmich instantly plays the through pass to Lewandowski down the channel. 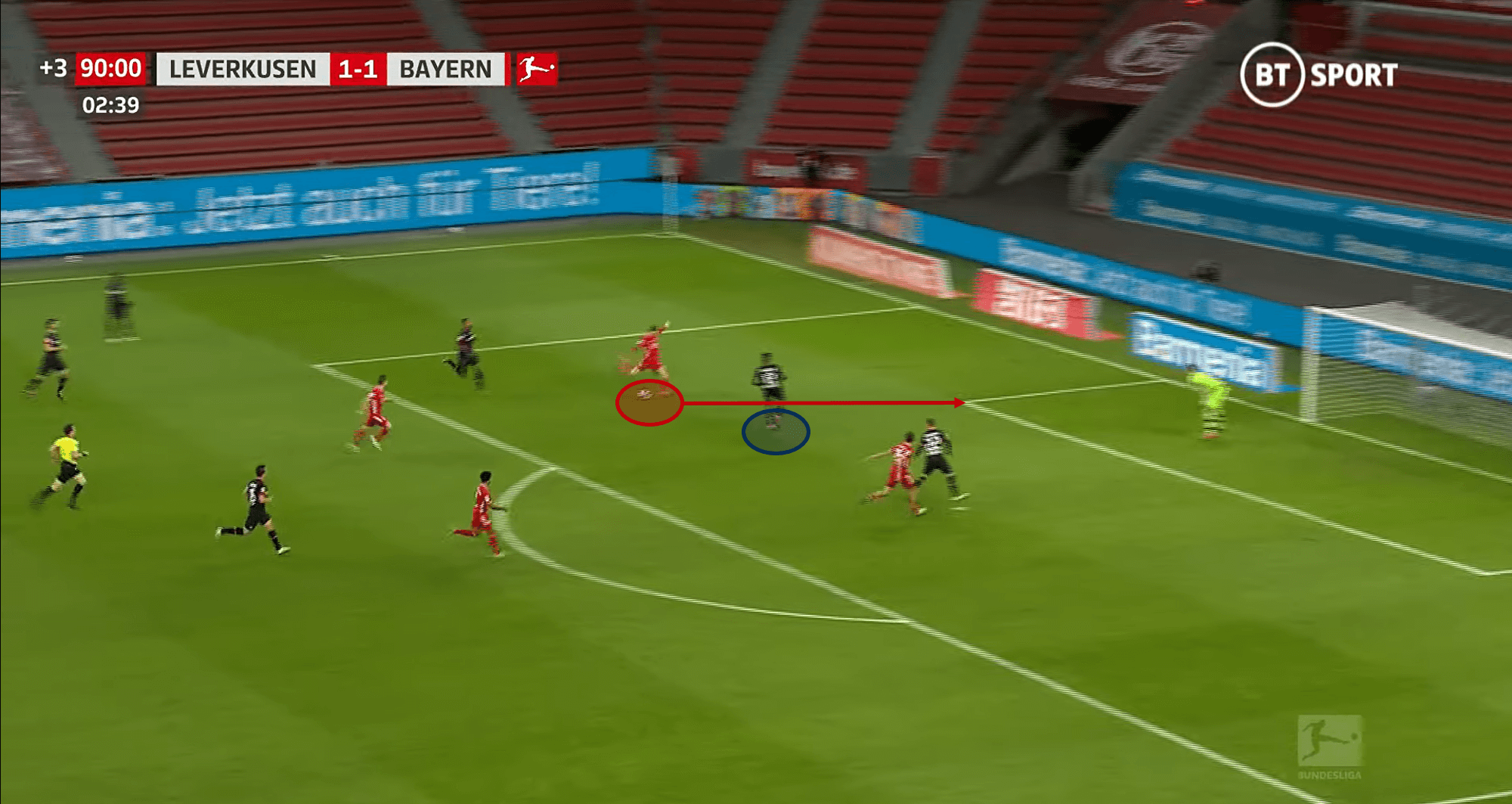 Lewandowksi runs with the ball for a moment, but, fortunately, has time and space to shift his body into a shooting position and gets even more fortunate with a deflected finish from a slightly wide angle.

Bayern’s frontline were not as domineering as they potentially could be, but they did come up against a solid team, unbeaten until this point. It felt as if the supporting line behind Lewandowski were a tad disconnected from the Pole, and with the fixtures coming in thick and fast, this is understandable. They did not create chances with frequency, although when Kimmich came on this all changed, which is a very promising sign for the projection of the rest of their season to come.

As we can see in the pass map below, Bayern relied fairly heavily upon Davies (#19) on providing attacking width. Although he is a fantastic young full-back, sometimes as a wide operator in the final third, his deliveries can be left wanting, despite their frequency. Having said that, he worked well with Gnabry and Alaba, who both worked in tandem to create opportunities for Lewandowski upfront.

At the end of the day, Bayern deserved this victory. They dealt capably with Leverkusen’s attack, and on another day, they could have scored a couple more. The xG metric had this game down as 0.31-1.30 in favour of the Bavarians and this was clear to see when watching the game. Now, time to recuperate during the winter break, and come back in January with fresher bodies and minds.