With France and Tottenham’s Hugo Lloris getting older, the search is on for Les Bleus to find their next number one goalkeeper. Candidates include Mike Maignan, Alphonso Areola, and the subject of this scout report, Alban Lafont. The French youngster finds himself on loan at Nantes from Italian side Fiorentina. The 21-year-old is looking to prove himself as being better than Bartłomiej Dragowski, who Fiorentina currently see as their best goalkeeper.

This tactical analysis will look at why Lafont is rated so highly and why he has been linked to the likes of Arsenal and Real Madrid. This analysis will look at his strengths; shot-stopping, reflexes, and passing abilities along with his weaknesses; handling and sweeping ability. We will also use graphs to compare his stats to Europe’s top five leagues.

Mature shot-stopping for his age

Many young goalkeepers lack the composure to consistently make correct decisions. However, Lafont is an exception to this. Whether it’s selecting the correct save technique or the best way to deal with a one-on-one situation, Lafont very rarely makes a mistake. 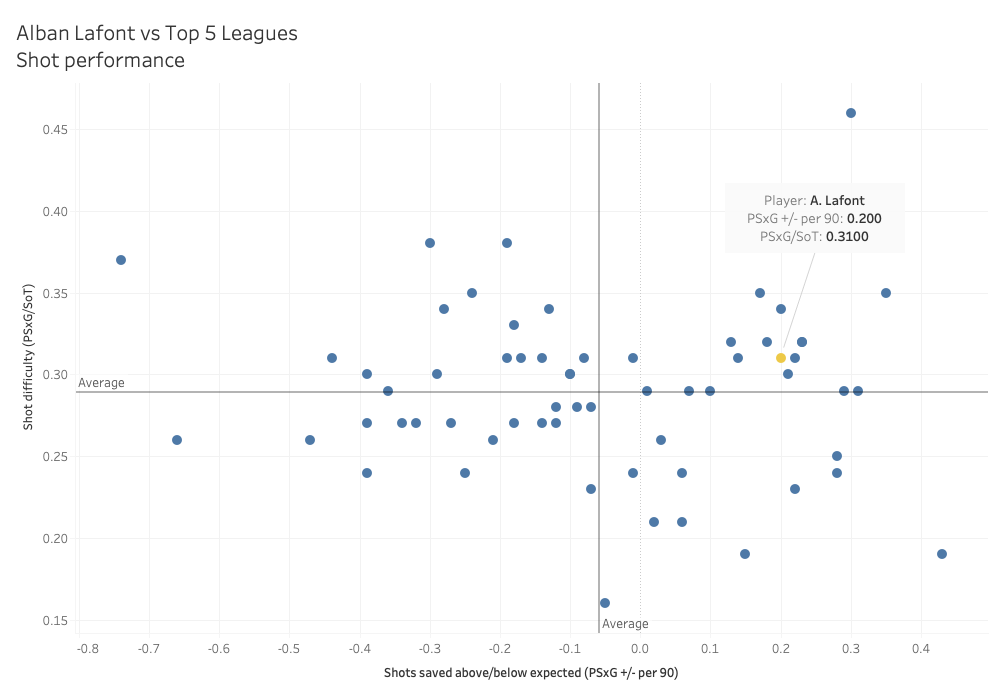 The Nantes keeper has been one of the best shot-stoppers in Europe this season. The above graph shows every goalkeeper in the top five leagues who have played at least 1,000 minutes of football. It looks at the average shot difficulty that each goalkeeper faced and how many goals they saved above/below the average. Lafont is positioned very well here. His average shot difficulty was above the average with 0.31, and he also prevented a lot more goals than he was expected to (0.2 per 90).

Lafont has a good mixture of reflexes and reach as a result of his height and speed. Standing at 6’4, the Frenchman is able to reach tough shots but is also able to make quick reflex saves from close shots.

Lafont’s speed and agility mean that he’s able to react to second shots after saving a first. As we can see in this example, the Frenchman makes a great first save low down to his right. Because the shot is of a high level, Lafont is unable to put the ball out of play and therefore rebounds to another attacker. But due to his speed and agility, he’s able to get up and react to the second shot. He protects his near post and blocks a majority of the goal. For a keeper of Lafont’s height, he does excellently to get down low to shots close to his goal. He does this through a combination of his anticipation and reflexes.

As well as his ability to anticipate shots close to his goal, he’s also very good at choosing the correct way to deal with one-on-one situations. A lot of inexperienced goalkeepers will look to rush the striker by running out to him. However, this often allows top-quality strikers to lift the ball over or around them because the goalkeeper is too concerned with closing them down rather than protecting their goal.

A top-class goalkeeper knows when to stay close to his goal and when to confront the attacker. Lafont is very good at this, as we can see in the example above. The only time a goalkeeper should dive at the opponent’s feet is when the attackers aren’t in control of the ball. Here, we can see that although Lafont engages the attacker, he maintains his position. Nantes already have two defenders putting pressure on the attacker, so Lafont only needs to spread himself. The keeper uses all four limbs to form a large block that prevents the ball from reaching the goal.

Different to the scenario above, Lafont has the advantage here. As the attacker takes a touch on the edge of the box, Lafont begins sprinting out to him. Before the attacker can take another touch and look up, the keeper has already dived at the ball, preventing another touch or shot. In this kind of situation, it is the best to dive at the attacker’s feet because they have no time to react.

Although Lafont is one of the best young shot-stoppers in Europe, he isn’t without his faults. The 21-year-old struggles when it comes to handling shots and pushing them to safety.

In this example here, Lafont’s good positioning and reach allows him to make the first save down low to his right. However, given the position of his body, he should either be holding the ball or palming the ball further from the goal. As a result of his weak save, another attacker is able to cross the ball over Lafont, and a goal is scored.

As this analysis shows, although Lafont isn’t without fault, he is one of the most consistent and mature young goalkeepers in world football. And his performances and approaches are backed up by his stats, especially this season.

Direct passing, but not necessarily long

Because of his team’s tactics, Lafont is made to take a fairly direct approach to his passing. However, it is very rare that a goalkeeper comfortable with the ball at their feet be forced to play a more direct style. The 21-year-old is a very good passer; he is very adept at using the chipped pass technique to find wide players who are high up the field. He prefers to do this rather than simple short passes.

This is a prime example of how Lafont ignores a simple pass, to make a more skilful pass that will advance his team up the field faster. The Frenchman identifies the teammate in space and is able to perform a pass that reaches his man accurately and fast. He ignores the shorter pass to his right and completes a chipped pass to the right-back who is more advanced.

Lafont is also very good at passing the ball under pressure. In this example, we can see how good his vision is to see a teammate in space. He uses the chipped pass technique whilst under pressure to find an accurate pass to his teammate. Lafont’s passing is vital to his team’s attack and advancing them up the pitch. However, he wouldn’t look out of place in a possession-based team.

Struggles to dominate his box

Sweeping and coming off his line is the only area that Lafont does struggle in. Given his young age, the 21-year-old is still fairly weak and therefore finds it difficult to dominate his box. Because of this, he doesn’t often have the confidence to sweep up behind his defensive line. However, he has proven that he is able to.

Although the above example isn’t taking place outside of Lafont’s box, he’s still showing that he has the ability to sweep, just not the confidence. When he realises that the attacker might get the ball first, he uses his speed to sprint off his line and clears the ball. Whilst he certainly has the ability, he struggles to decide when he should use it, as we can see in the graph below. 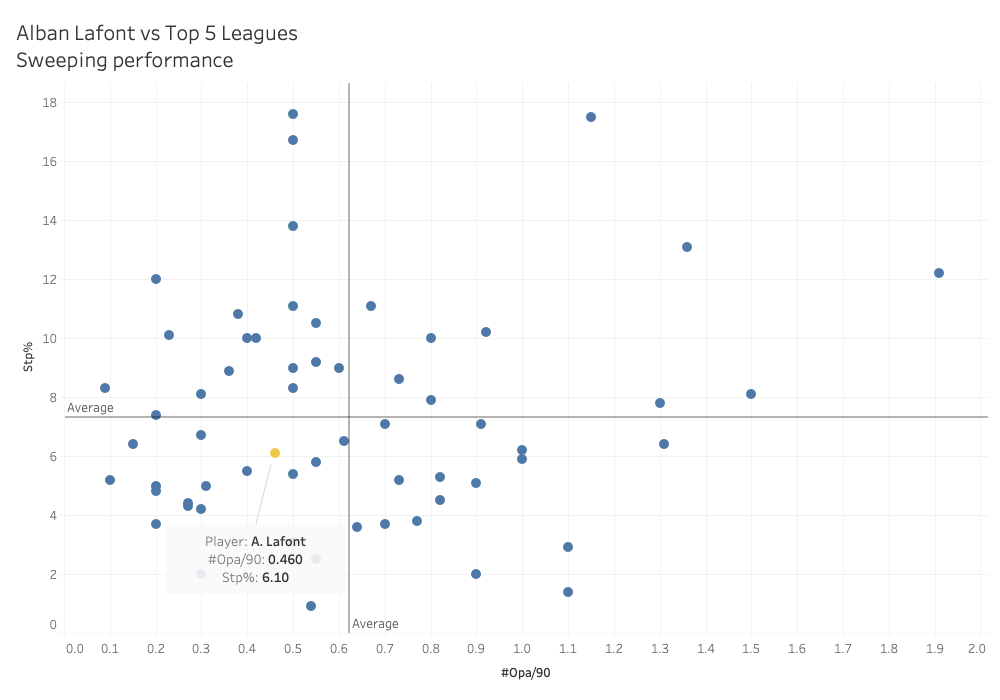 As we can see, Lafont is below the average in both defensive actions outside of his penalty area per 90 and percentage of crosses stopped. This is a result of his lack of confidence to dominate his box.

This scout report has shown why Alban Lafont is one of the best up-and-coming goalkeepers in Europe’s top five leagues. He’s fighting for his place as Fiorentina’s number one jersey. But Dragowski appears to be winning the battle, so Lafont could be looking to market himself around. Lafont excels in his shot-stopping because of his agility, reactions, and anticipation. He could fit very well into a team with a possession-based tactic because of his great passing ability. However, his weak frame means that he isn’t able to dominate his box that well. However, this is something that can be worked on. Don’t be surprised if we see Lafont at a top European club in the not so distant future.