Manuel Neuer: Back to his best? – scout report

You can’t discuss the best goalkeepers in world football without discussing Bayern Munich and Germany’s Manuel Neuer. In some way, the 34-year-old normalised sweeping amongst modern-day keepers. His performances over the last few seasons have been called into question because of the high standard that he has set for himself. However, after a very successful 2019/20 season, having just completed a treble, it’s a good time to analyse whether his form has returned.

This tactical analysis will take a look at how Neuer’s 2019/20 stats compare to previous seasons, focusing on the 2018/19 season when he was subject to much criticism. We will also take a look at how he is so effective at sweeping and preventing dangerous attacks before they occur and how his shot-stopping technique makes him one of the best goalkeepers in the world.

Neuer over the seasons 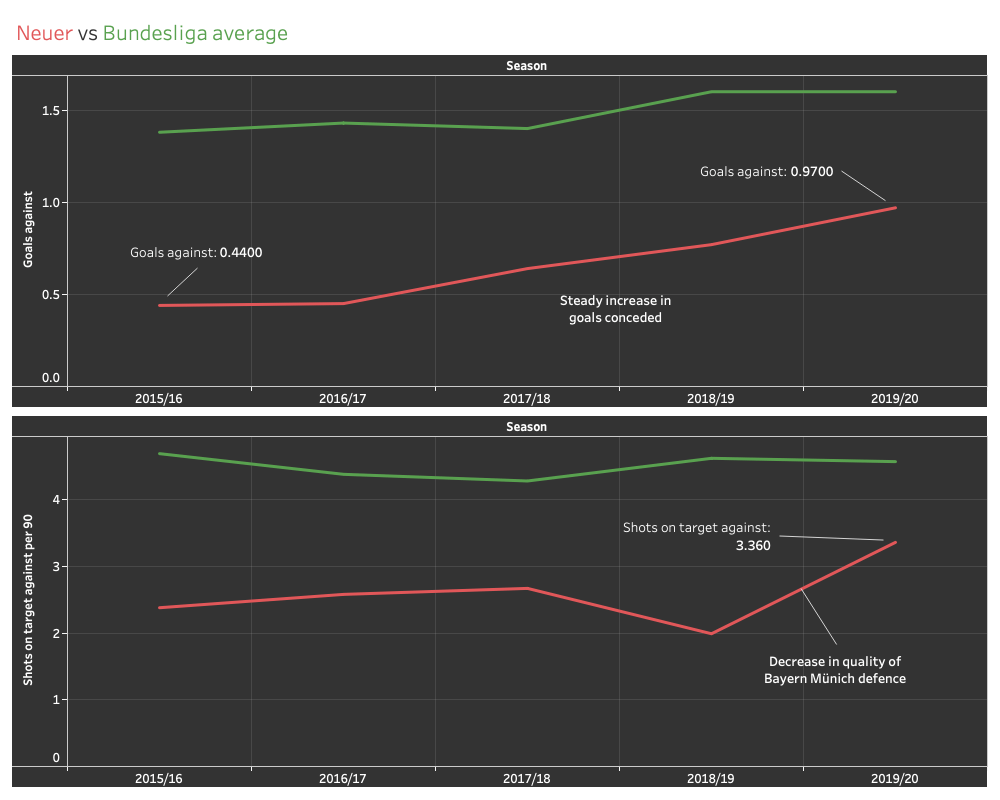 The above graphs measure Bayern Munich’s defensive stats from the past five seasons. Goals against per 90 and shots on target faced per 90. It’s evident that overall, Neuer’s defence has gotten progressively worse. He’s gone from conceding 0.44 goals per 90 to 0.97. This is to be expected because of the attacking focus that is now in football. In his most successful season of late, 2019/20, he faced the most shots on target with 3.36 per 90. However, both stats are significantly below the league’s average. 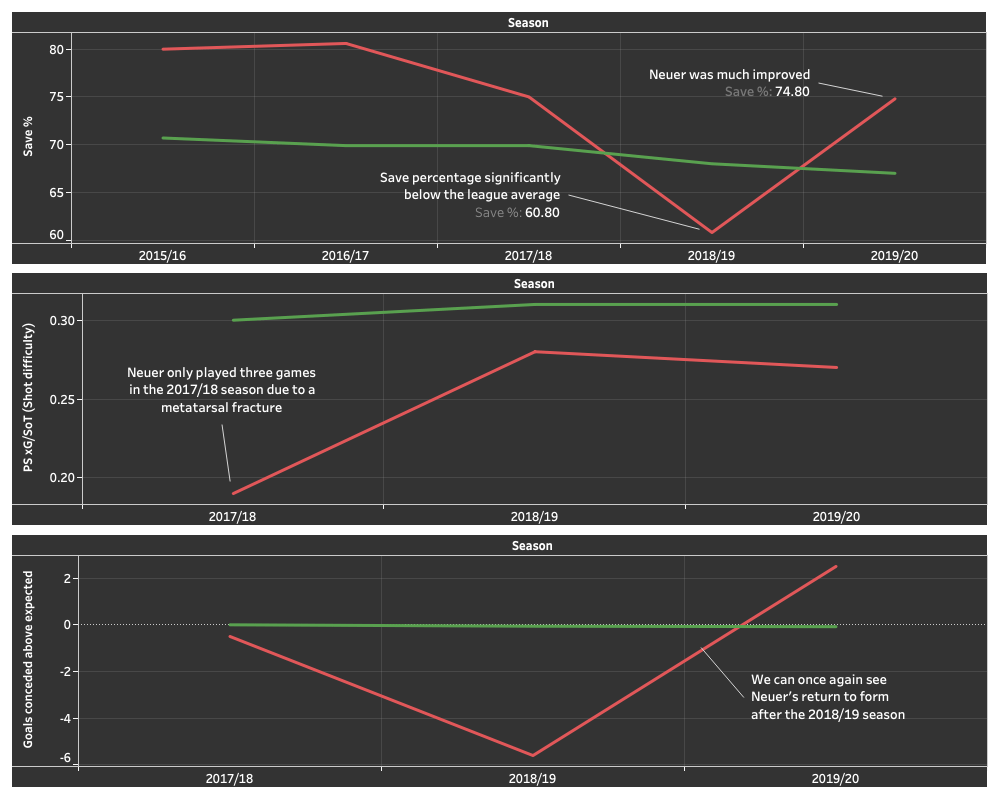 This set of graphs show how Neuer has performed over the past five seasons. They measure his save percentage, shot difficulty, and goals conceded above/below expected. It’s worth noting that during the 2017/18 season, Neuer only managed to play three games due to a metatarsal fracture.

The analysis so far has shown that the Germany captain’s form returned to normal during the most recent season, however. Neuer’s stats improved to 74.80% and 2.5 respectively during the 2019/20 season. The difference between these two seasons proves that the criticism Neuer received was very much premature. The 34-year-old rediscovered his form this past season, leading his team to a Champions League title. Looking at his save percentage, Neuer hasn’t yet returned to very best, but he is certainly out of his slump.

How did Neuer compare to other goalkeepers during the 2019/20 season?

To fully understand how Neuer performed last season, we need to compare him to other goalkeepers within the top five leagues. The first graph will measure each goalkeeper’s shot-stopping performances. 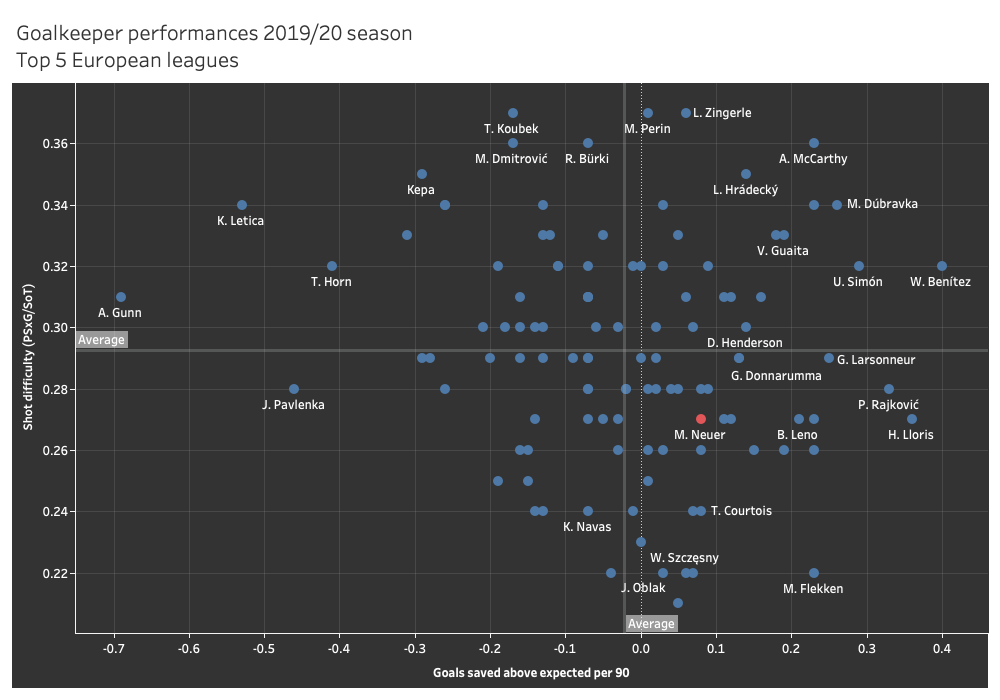 The above graph uses shot difficulty and goals saved above expected per 90 to understand which goalkeepers performed the best. Although Neuer faced shot difficulty below the average he saved more shots than he was expected to as he has a PS xG +/- per 90 value of 0.08. Neuer is positioned near Liverpool’s Allison and Manchester United’s David de Gea.

Although Neuer isn’t one of the best performing goalkeepers in Europe, he still ranks above a lot of keepers with good reputations. His position in this graph may appear underwhelming, but he is very much performing on his expected level.

Neuer’s shot-stopping has always been above-average, making him one of the best goalkeepers in the world. But one dimension to his game that many goalkeepers are yet to master is his sweeping ability. Neuer was not the first ‘sweeper-keeper’, however, his confident approach makes him stand out. 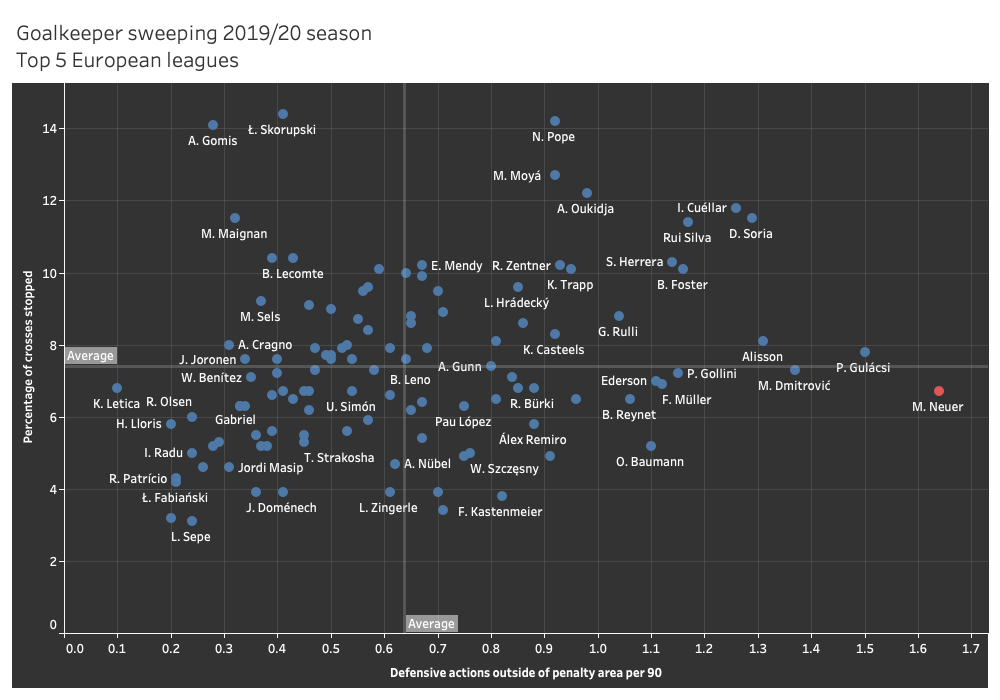 The above graph looks at each goalkeeper’s percentage of crosses stopped and defensive actions outside of penalty area per 90. These two stats are a good indication of how confident these keepers are at sweeping.

Neuer has by far the most defensive actions outside his penalty area per 90 with 1.64, proving he is the most confident sweeper-keeper in the top five leagues. However, the German only stops 6.1% of crosses he’s faced. This is because he plays for a good team who actively have possession so don’t face many crosses. Compare this with Burnley’s Nick Pope who has the highest percentage stopped because his team invite crosses into the box.

Perfecting the role of sweeper-keeper

Coined by the Russian Lev Yashin and his infamous hat, sweeping tactics have become more important in the modern game. With most of the elite teams playing a very high line, looking to press their opponents and recovering the ball, it is vital that a goalkeeper is confident in controlling the area behind their defensive line.

Neuer has mastered the art that Yashin created. He is ultimately an 11th outfield player because he plays so far out of his box. He has extreme concentration and is always alert to any dangers that could catch his defence off guard. Neuer’s calmness and confidence mean that not only does he sweep up and prevent dangerous attacks before they start, but he can also build counter-attacks and find teammates instead of clearing the ball off the pitch.

In the above example, we can see Neuer’s advanced starting position in relation to his back four. With Alphonso Davies and Benjamin Pavard, the full-backs, pushing high up the pitch to provide width, Neuer fills in almost as a third centre-back. The 34-year-old receives a huge 24.72 passes per 90, showing how advanced his position is. Neuer has the confidence and composure to take up this advanced position.

As well as helping his team whilst in possession, Neuer is very good at sniffing out and preventing attacks before they arise. 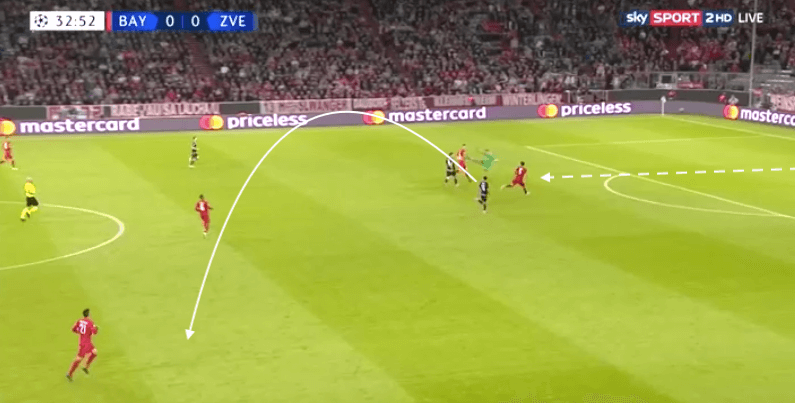 In this example, in the Champions League, we can see Neuer coming off his line and out of his box. If he doesn’t intercept this ball, then it would leave the Bayern Munich centre-backs in an awkward situation. Neuer’s action eliminates the danger completely, and in fact, his pass puts Bayern on the attack.

The German likes to start counter-attacks after he recovers the ball. He starts 0.56 quick breaks per 90 and has an xG build-up value of 10.74, the highest in the league.

In this example, Neuer prevents a guaranteed one-on-one situation. The German uses his speed to come out of his box and intercept the ball before the attacker can get to it. Neuer improvises and uses his chest to intercept the ball, in doing this he is able to find Davies with a good pass, which again, sets up a counter-attack opportunity.

Confidence in his shot-stopping and reflexes

As identified earlier, over the past five seasons Bayern Munich’s defence has decreased in quality, meaning he has had to make more and harder saves. With the exception of the 2018/19 season, Neuer has continued to be one of the best performing goalkeepers within the top five leagues. This is mainly down to his confidence in his shot-stopping ability.

One of his most important saves came in the Champions League final against PSG. In the first image, we see Neuer backing his reflexes and ability to save a shot from Neymar. Instead of rushing out to the attacker, Neuer engages slightly, closing down the angle, and then spreads himself as Neymar strikes the ball. He actually saves the shot with his outstretched hand, showing how well he spreads himself. Then, when he realises there is more danger, he is very quick to react to it. He throws himself towards the ball, stopping the pass getting through and preventing a guaranteed goal.

Neuer is great during one-on-one situations because he has the confidence to back himself and choose the optimum technique. He doesn’t engage too far, attempting to smother the ball unless the attacker isn’t in control of the ball.

Against Lyon, Neuer combines his intelligence to read play and his one-on-one technique to prevent a goal. He identifies that a cross to the man running into the box is likely, so he takes his attention away from a possible shot and onto the Lyon man possessing the danger. He meets the attacker, instantly putting him under pressure. The striker’s only option is to hit the ball into Neuer because he has spread himself so well with his limbs outstretched.

Neuer stands out from other top goalkeepers because he has a different attitude. His leadership, confidence, and ability to control his box is evident in his shot-stopping. He is very comfortable staying close to his line when attackers are near his goal, whereas many other goalkeepers choose to rush out to the attacker, often getting caught out with a chip because of bad positioning. Neuer backs his reflexes to prevent goals.

In the two examples above we can see that Neuer deals very well with shots close to his goal as he is able to maintain his position on the line and position himself in the best possible place. In both situations, he makes his body as big as possible, covering as much of the goal as possible. You could argue that both shots are near his body, however, he has used his speed and reading of the game to get himself into the best possible position.

This scout report has proven that Manuel Neuer is still one of the best goalkeepers in world football. Although he is 34-years-old, he is still at the top of his game. His stats and performances from the 2019/20 season have shown that the criticism he received in the 2018/19 season, after just returning from a serious injury, was very much premature. The German has revolutionised the role of the sweeper-keeper and has backed this up with consistent world-class shot-stopping. It’s hard to say whether Neuer is coming towards the end of his career because goalkeepers can play for a lot longer than outfield players. And whilst he is still performing well at the highest level, there is no need for him to retire.