Belgium played host to Cote d’Ivoire for the first time since 2014 when they played out a 2-2 draw. The home side decided to rest a number of key players for this international friendly, with the Nations League tie against England coming up just a few days later. However, they still managed to put out a side with players from the EPL and Serie A, showing how much strength in depth they have.

Their opponents, the Elephants, also boasted a side with plenty of top league experience, with players from the aforementioned leagues as well as Ligue 1. With the talent on show, it’s clear that this generation of Cote d’Ivoire players are certainly one of the stronger sides on the African continent. 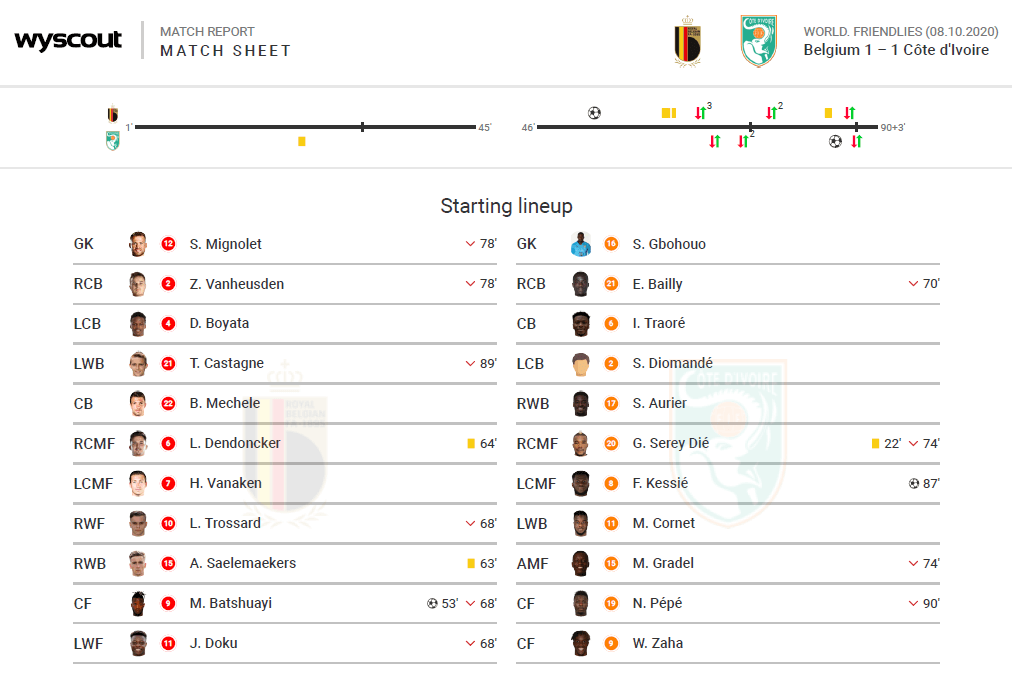 Belgium went with a 3-4-3 formation, with Simon Mignolet in goal. Roberto Martínez went with Dedryck Boyata, Zinho Vanheusden and Brandon Mechele as a back three. Hans Vanaken and Leander Dendoncker were the two central midfield players, with Alexis Saelemaekers and Timothy Castagne acting as wing-backs. Michy Batshuayi was the main striker, with Leandro Trossard and Jérémy Doku providing support.

Patrice Beaumelle, who was only recently appointed head coach in March of this year, was taking charge of his first game for the West African side. The former assistant to Herve Renard matched his Belgian counterparts with a 3-4-3 formation as well. Experienced goalkeeper Sylvain Gbohouo was between the sticks, with Eric Bailly, Ismael Traore and Sinaly Diomande making up the back three. Serge Aurier and Maxwel Cornet were acting as the wide players in the four-man midfield, with the combative Geoffroy Serey Die and Franck Kessie operating in the central areas. Wilfried Zaha, Max-Alain Gradel and Nicolas Pépé were the interchanging front three.

No striker, no problem?

When we look at the away side’s line-up, it is clear that they were using three wide players, with none of them being considered an out-and-out striker. For a side that has in the past been able to use the likes of Wilfred Bony and Didier Drogba, this lack of a clear striking option is a worry. Christian Kouame appears to be the next man in line, coming off the bench in the second half. However, prior to that, they lined up with three players who wanted to get on the ball.

Initially, Zaha and Pépé were the two strikers, with Gradel operating in the spaces just behind them. When on the defensive, Pépé and Zaha would split between the wing-back and the left or right-sided centre-back, as we see below. With their mobility, they were there to disrupt passing lanes and Belgium’s ability to play out from the back. 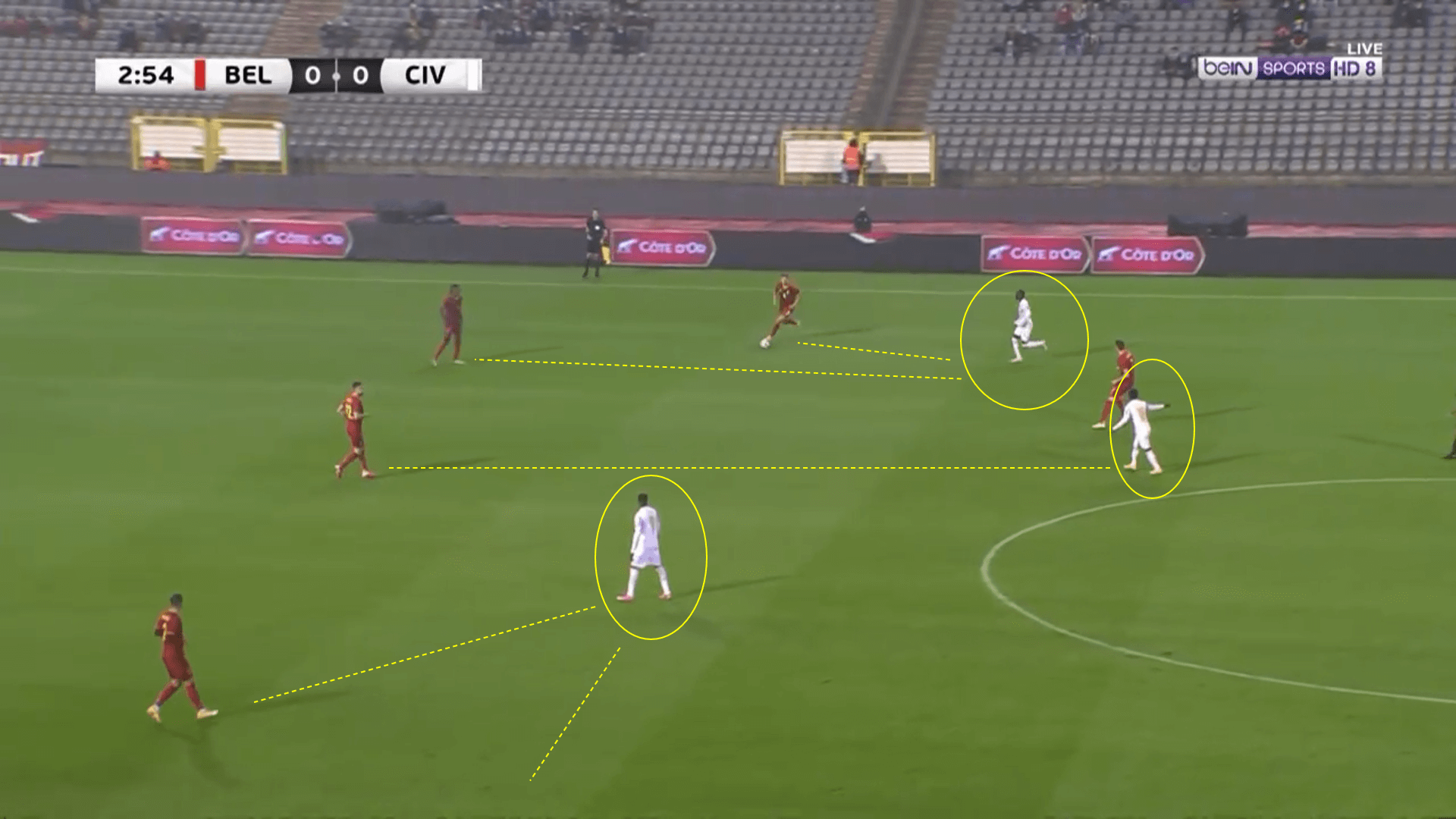 However, one issue with not having an out-and-out striker is that they usually look to remain as far forward as the halfway line when the opposition is pushed forward on the attack. Yet Zaha and Pépé like to get on the ball, and in reality are more effective as players when they get on the ball, often making things happen. Yet, in order to do this, they both dropped deep, allowing Belgium to push up and squeeze, or even sit on the halfway line to counter any long clearances. 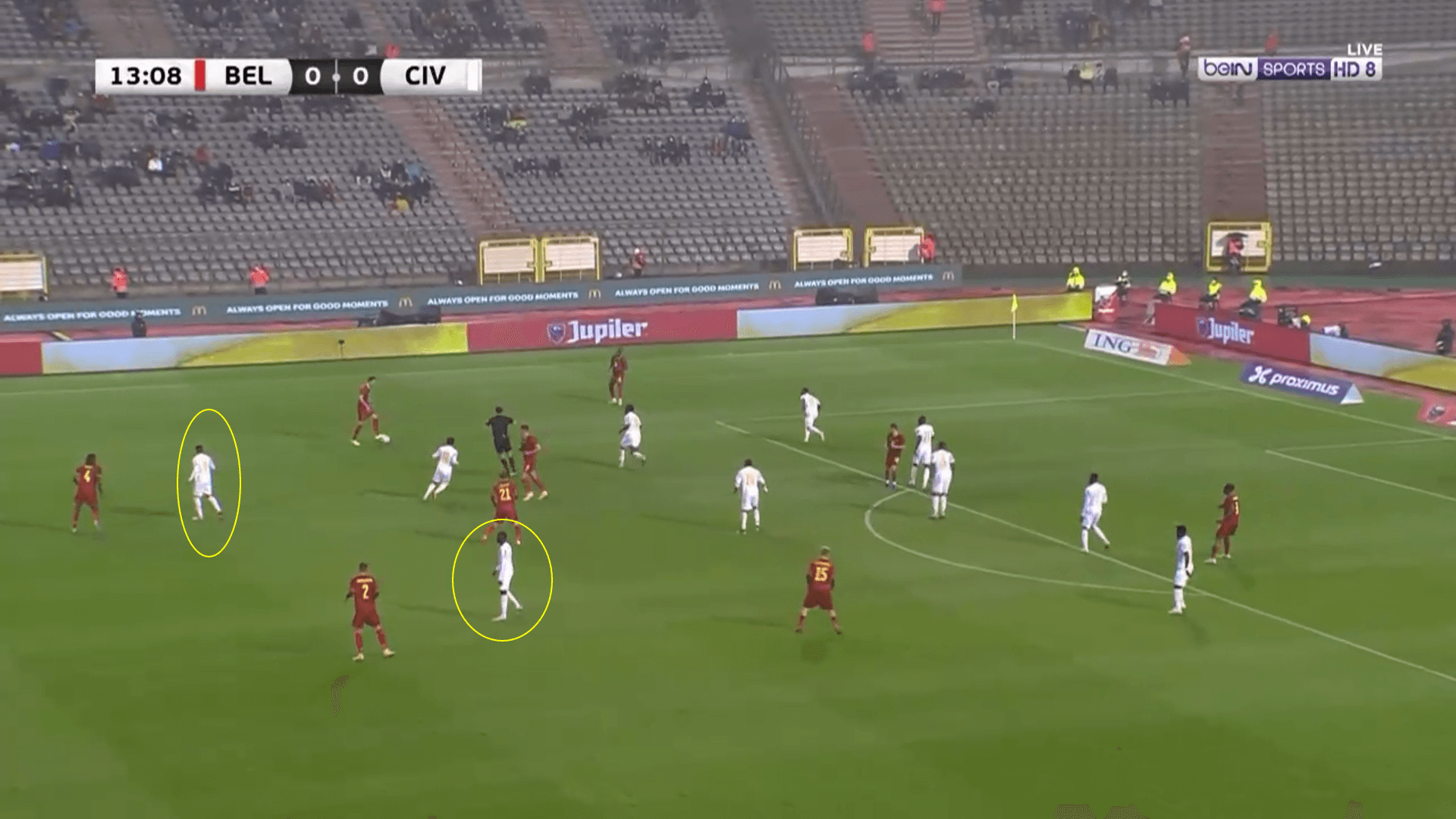 This meant that an out ball for Cote d’Ivoire was difficult, as their strikers were coming too deep, looking to receive the ball, rather than staying further forward in order to stretch the play. When they did manage to get through on the counter, they lacked the numbers to get into the box. We see below that, as the cross comes in, only Zaha could be considered in the area, and it would have taken an exceptional cross for him to have a chance on goal. 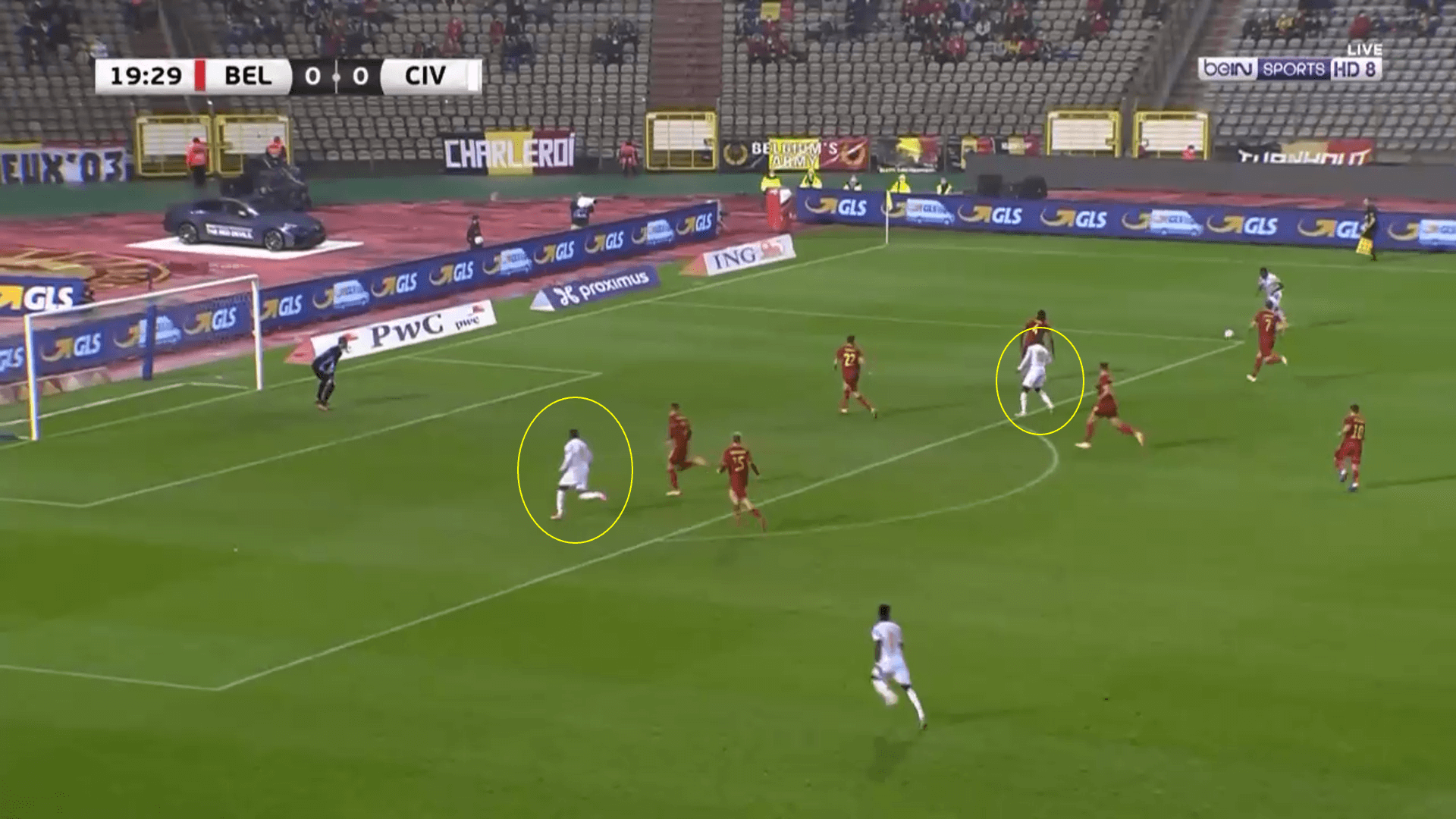 While all three are good players in their own right, it was clear in the first half that they were not the right combination of players to trouble the Belgian defence. It is of little surprise that they ended the first half with only 0.06 xG. Three players who wanted to get on the ball meant that a lot of the time, the play was in front of the Belgian defenders, rather than trying to turn them and force them to face their own goal.

Belgium were able to take the lead by taking advantage of a combination of the away side’s press and what appeared to be a lack of communication and application of the pressing game. The first mistake from the away side comes from allowing Vanheusden to drive the ball forward, despite there being three attackers against the three defenders of the Red Devils. Allowing Vanheusden to drive so far forward forced the midfield of the away side to push up to try and stop him. 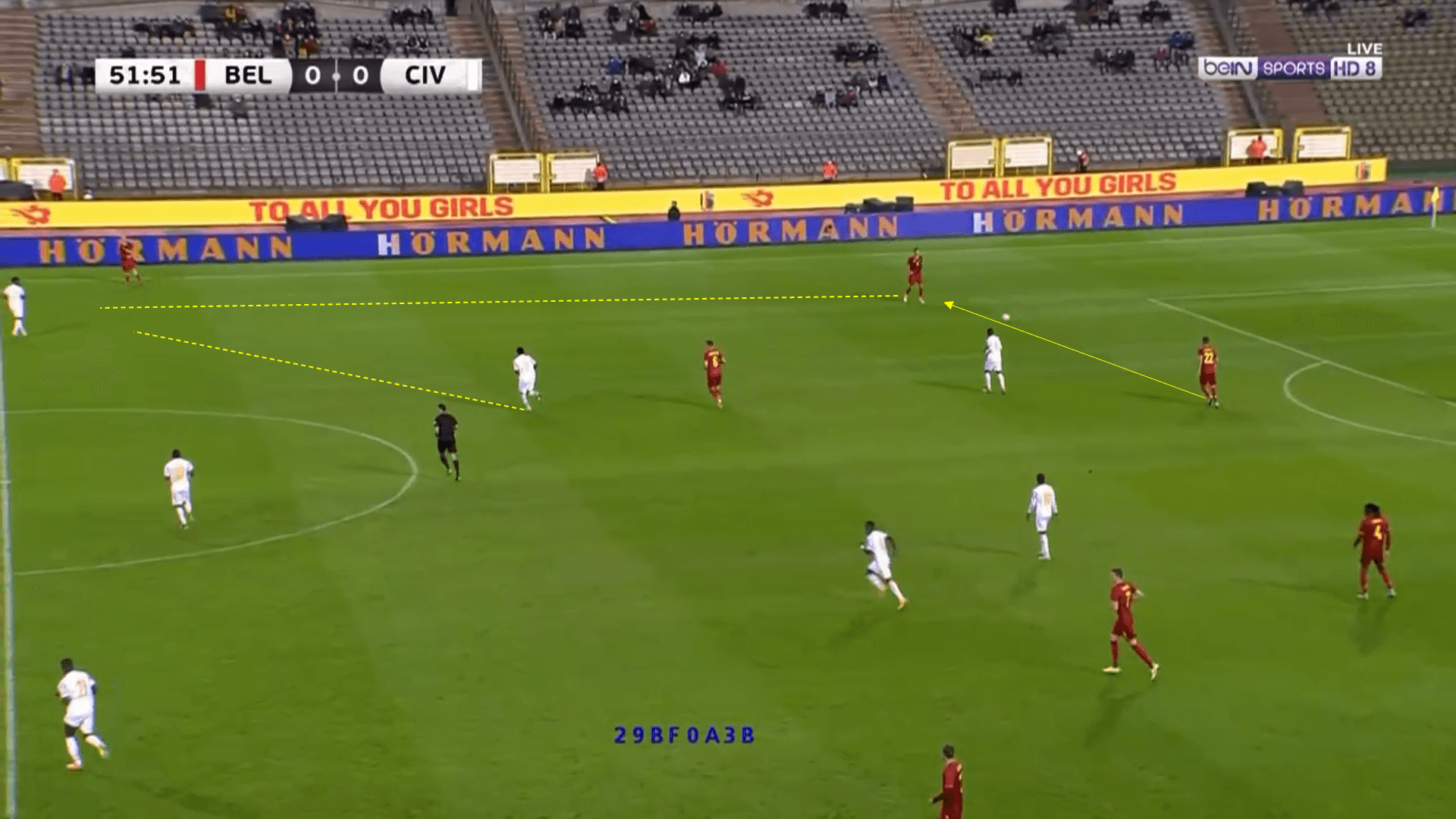 As they push up, Trossard has come towards the ball, dragging a defender with him. This allows Saelemaekers to have plenty of space to run into. Cornet, being more of a winger than a defender, perhaps doesn’t have the same instincts as a normal full-back would, and has moved to try and put pressure on Vanheusden. The combination of allowing the defender to push so far forward unopposed, and the simple movement of Trossard, has created a gap in the Cote d’Ivoire backline. 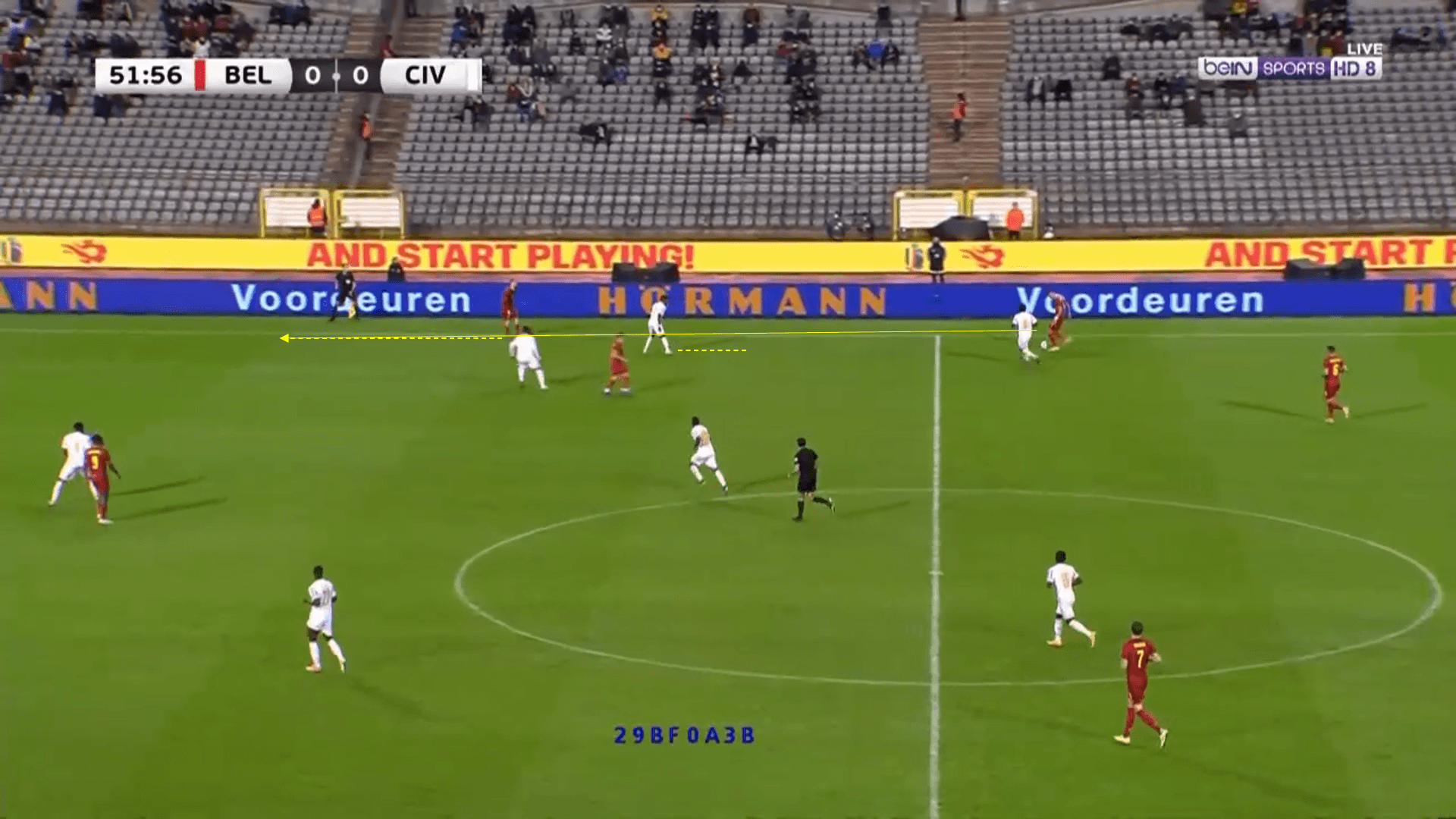 This gap forces Diomande to get out and chase the Belgian wing-back, while Traore is clearly concerned that Saelemaekers may beat his partner, so opts to split the gap between the two.

By moving towards the ball, he allows Batshuayi to drift off him and find the net. Belgium will certainly be happy with a goal that came from decisive play, as well as an excellent cross from the young Saelemaekers. 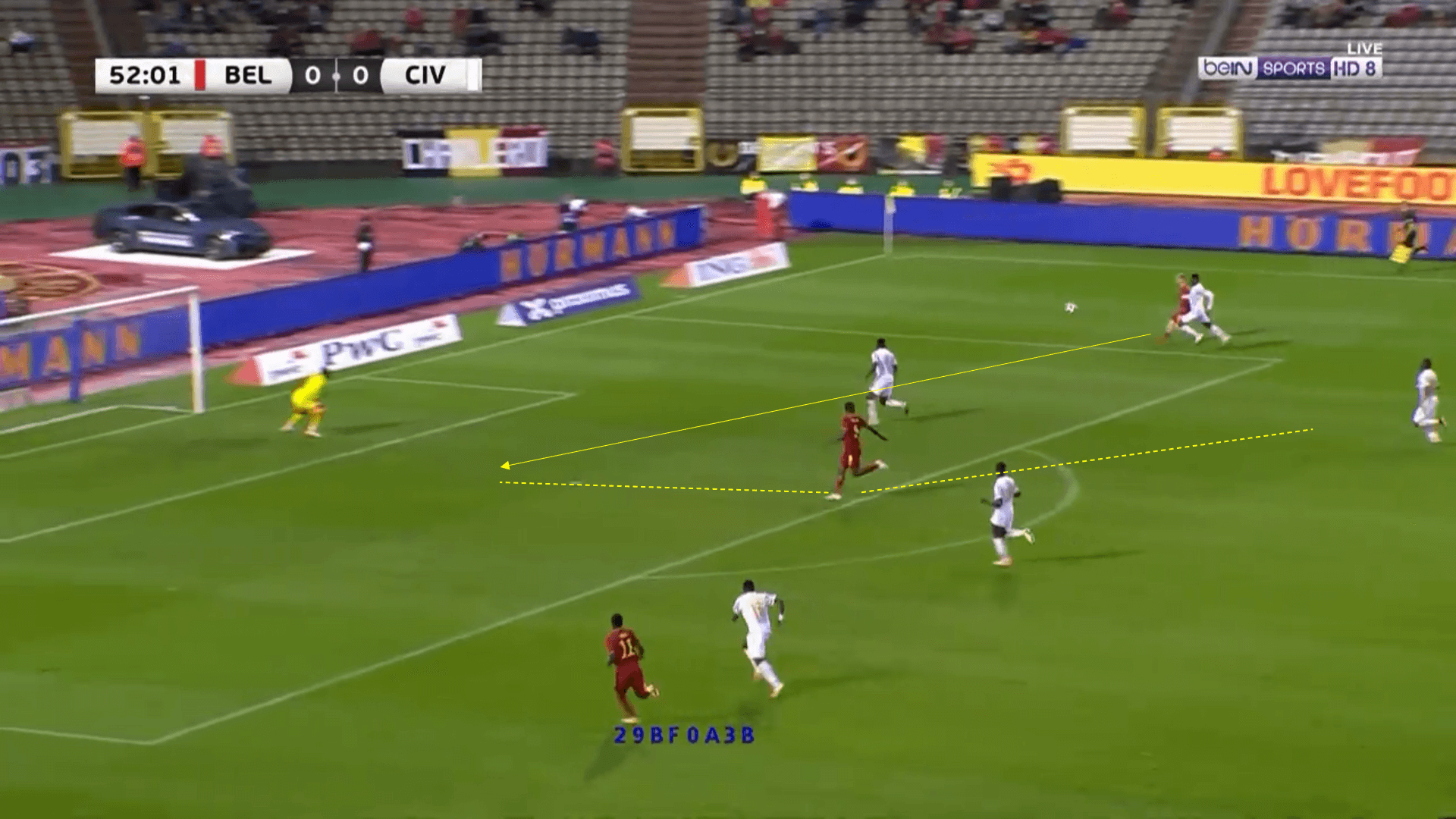 While they only had 39% of the ball in the second half, Cote d’Ivoire had their best spell of possession after the 80th minute, and it was during this time that they won the penalty that got them back in the game.

We see below that the back three have pushed up inside the Belgian’s half, as the home side looked to drop and conserve the lead. They have also brought on Kouame, an out-and-out striker, to play alongside Zaha. 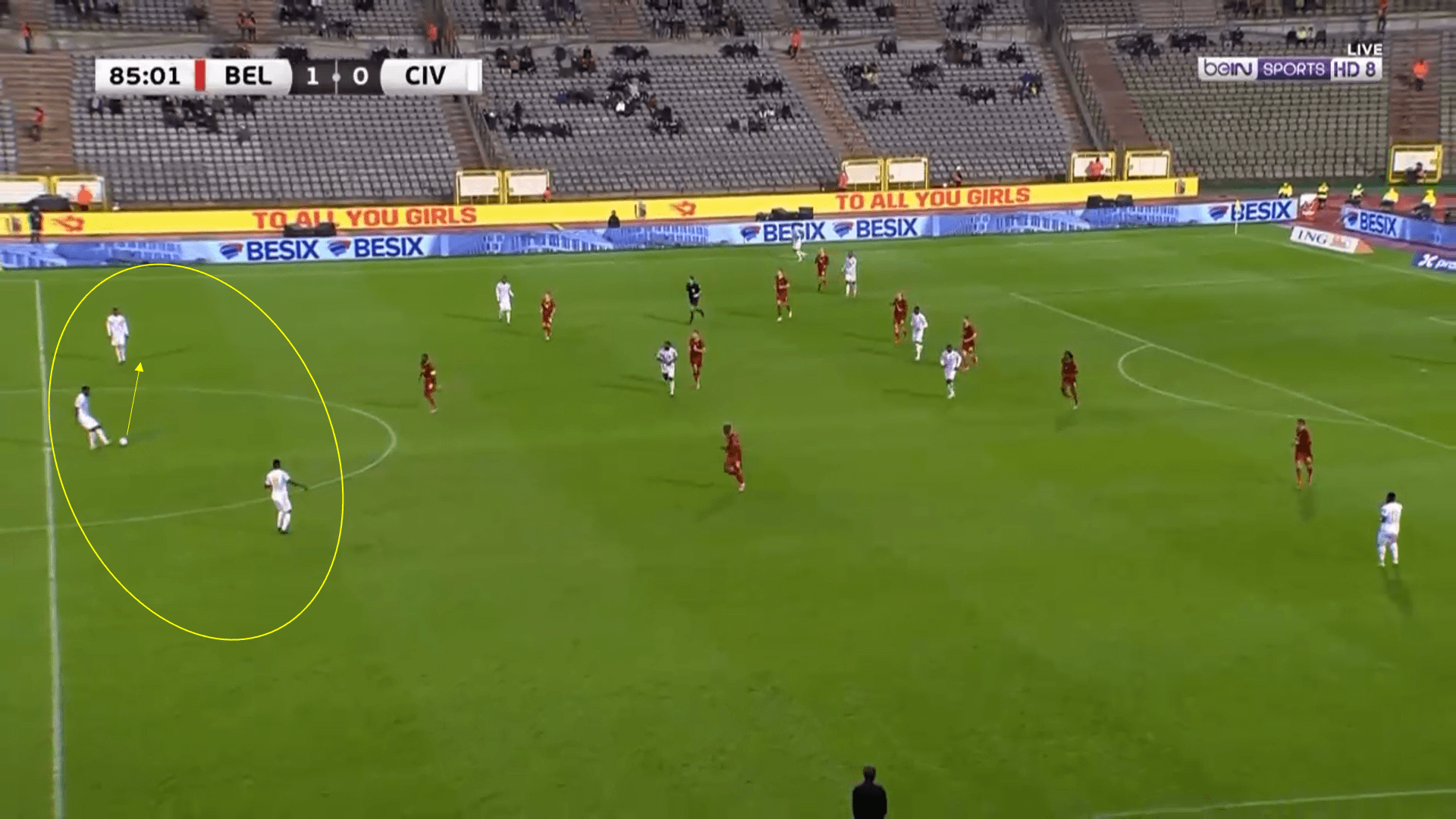 We spot that Zaha, rather than dropping deep as he did in the first half to get the ball, remains high up the pitch, thanks to the entire side pushing further forward.

This allows the away side to play the ball between the lines of the midfield and defence of Belgium, and get him into a one-on-one situation with the centre-back. Zaha, being an excellent dribbler, is able to take advantage of this matchup. 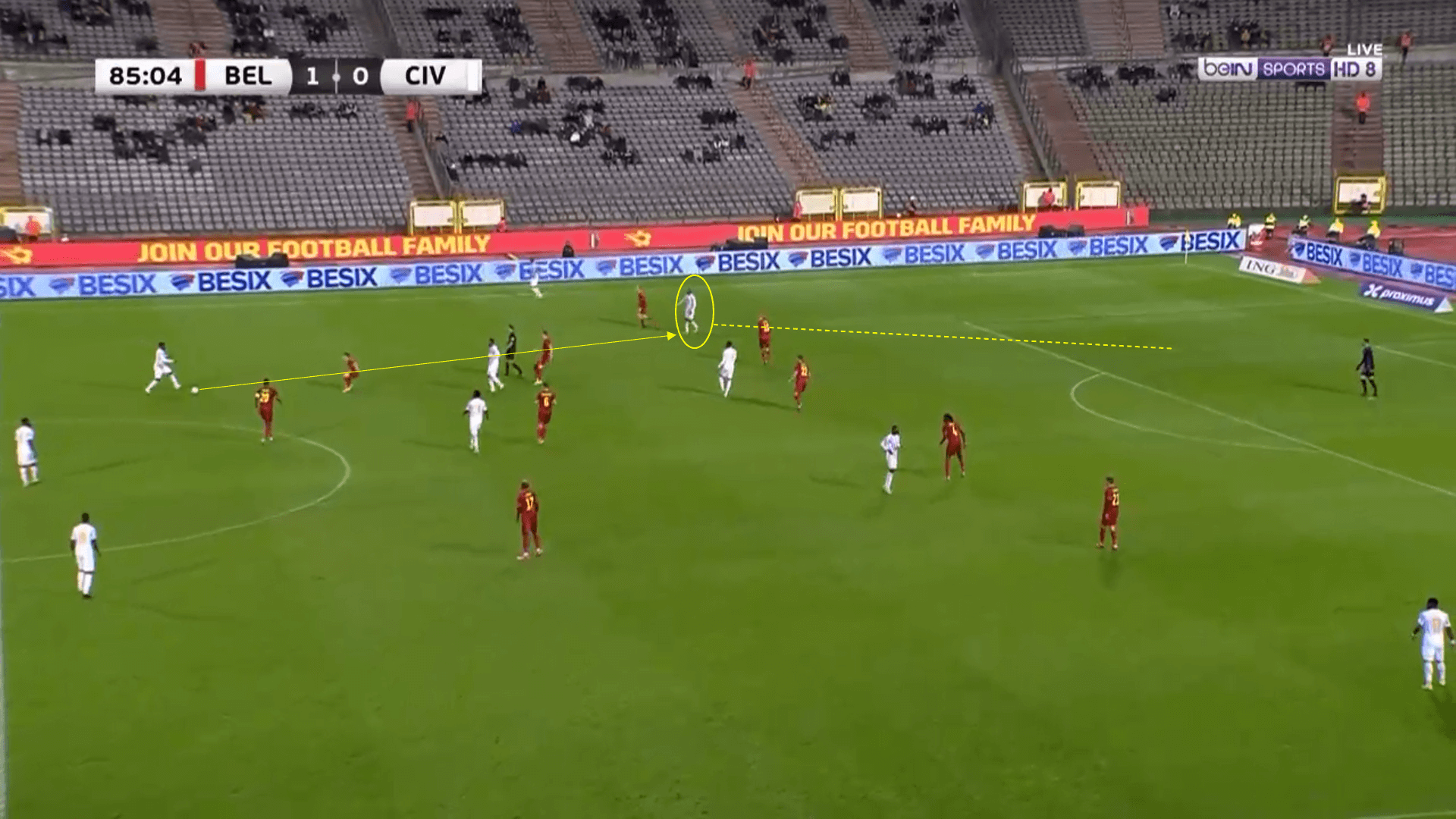 If we compare the below image to one earlier, Kouame is looking to drive into the box from the same position where we saw Pépé motionless in when the ball came in.

This means that the Belgian defenders needed to keep an eye on him more, and thus aren’t able to cover across and help stop Zaha. He is eventually brought down, and Kessie converted the penalty to end the game at 1-1. 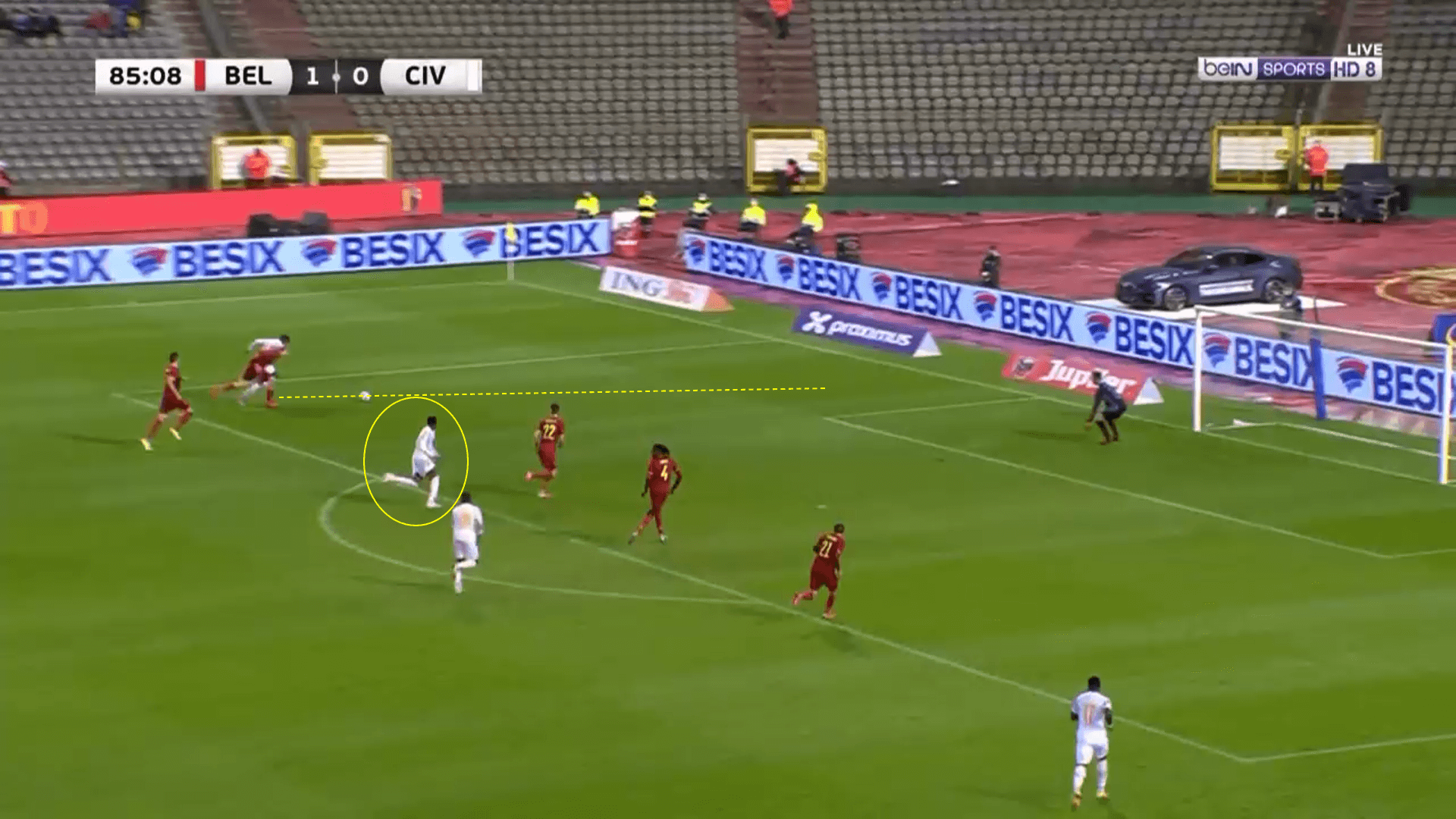 International friendlies are rarely the most exciting of matches. Cote d’Ivoire certainly have a few tactical areas to improve upon, especially when it comes to whether or not they can go without a recognised striker. However, they were certainly a match for their Belgian counterparts, and the squad looks like it is strong enough to compete continentally and further afield. New manager Beaumelle will have been pleased with the first performance, and will surely have noted some areas to improve upon from this game.

For Roberto Martínez, he will probably be slightly disappointed that his side didn’t push on after going a goal ahead. However, like Beaumelle, he also had a chance to look at some players, especially youngsters like Doku, and see how they could complement his first-choice team. All in all, it was a deserved draw for both sides.