Aaron Ramsey 2020/21: How Andrea Pirlo has used the Welshman so far – scout report

In February of 2019, Aaron Ramsey signed a pre-contract agreement with Italian giants, Juventus, to join the club that summer from Arsenal. The Welshman had spent over a decade in London, joining the Gunners in 2008 for almost five million pounds. Nonetheless, things had begun to get stale at Arsenal by the end of his time there, and eventually, Juventus offered him a reported 400 thousand pounds a week if he joined them on a free transfer.

This pre-contract agreement took effect at the beginning of July 2019. Ramsey was signed by Juventus’ manager Massimiliano Allegri, however, Allegri left the club at the end of the 2018/19 season and was replaced by former-Chelsea head coach, Maurizio Sarri. The 2019/20 season for Ramsey under Sarri did not go quite as well as he may have thought, with Ramsey managing to play just over 1,000 minutes for Juventus in Serie A, scoring 3 times, and only getting 1 assist.

When Andrea Pirlo succeeded Sarri over this past summer, it was widely reported that Pirlo would look to replace Ramsey as he was not overly fond of the player. Despite these rumours, Ramsey has started in both of Andrea Pirlo’s competitive matches in charge so far this season. As well as this, he has also managed to claim one assist, already matching last season’s tally.

This scout report will be a tactical analysis of how Aaron Ramsey has been utilised so far under Pirlo this season and it will be an analysis of how the 29-year-old has been so crucial for the Italian legend’s tactics at Juventus.

Since Pirlo was appointed as manager of The Old Lady, he has changed their choice of formation from the previous few seasons. Under both Sarri and Allegri, Juventus mainly used back four formations, typically either the 4-2-3-1 or the 4-3-1-2. Pirlo has deployed a 3-4-1-2 in every game that he has coached so far during his short tenure.

In this 3-4-1-2 system, Ramsey is one of the most crucial players in the set-up. He is played in the attacking midfield role, sitting behind the centre-forwards and in front of the midfield line.

In the build-up phase of Juventus’ attack, Ramsey positions himself in between the lines at all times. 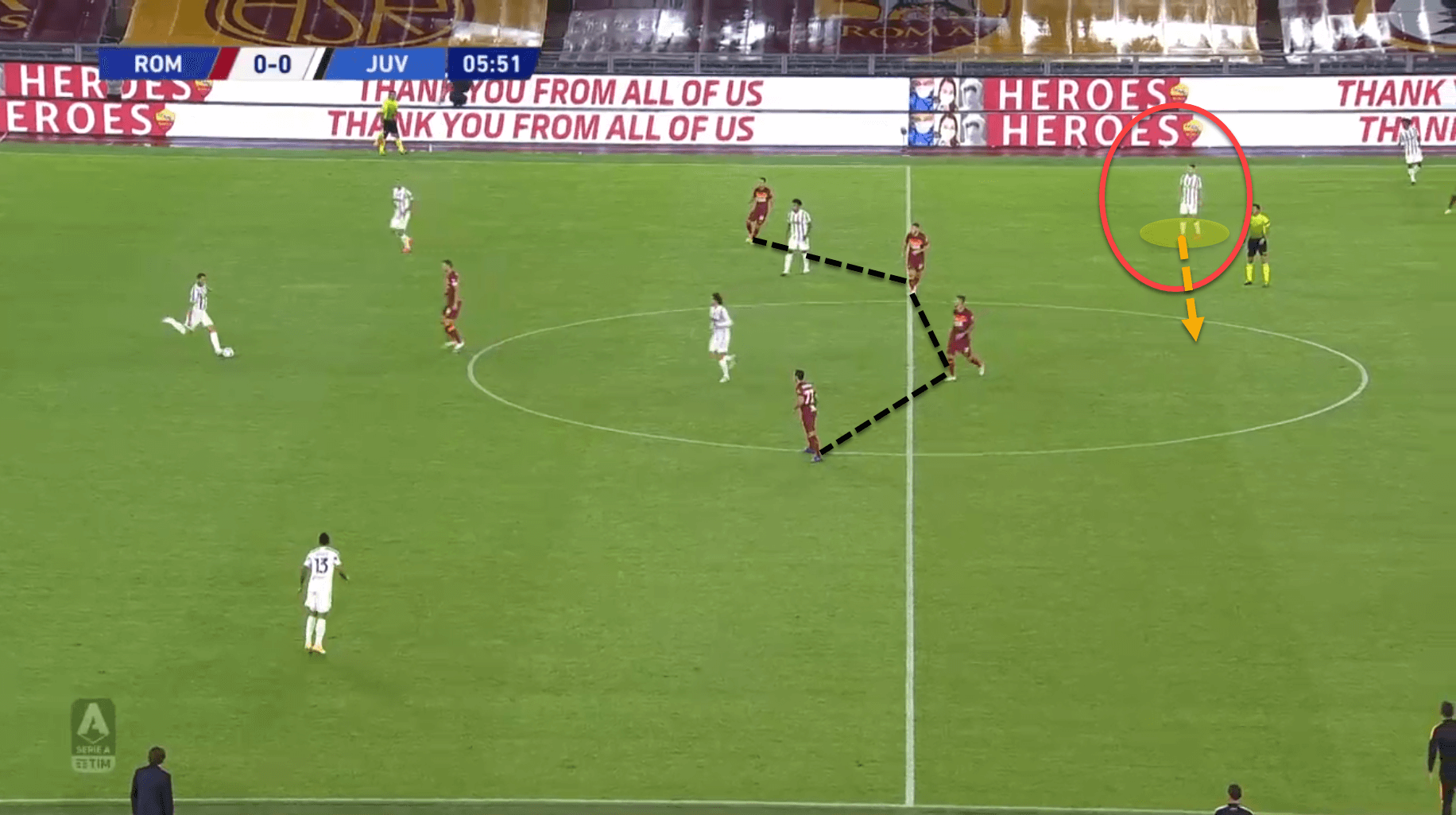 Ramsey rarely drops in front of the opposition’s midfield line as by positioning himself between the lines, he is able to act as a progressive passing option for the backline and Juventus’ double-pivot to play through the gaps.

In the image above against Roma, Ramsey has positioned himself between Roma’s right-winger and right central midfielder as he feels that this is the best space to occupy to allow the Juventus backline and double-pivot to play through the opposition’s midfield line.

In these positions, however, Pirlo wants his Juventus team to try and build their way through the thirds, and so the Welshman is instructed by his manager to shift to the ball-side as much as possible whilst Juventus are moving the ball around the midfield and backline, trying to find a central opening in their opponent’s defensive block. This can be seen in the following image. 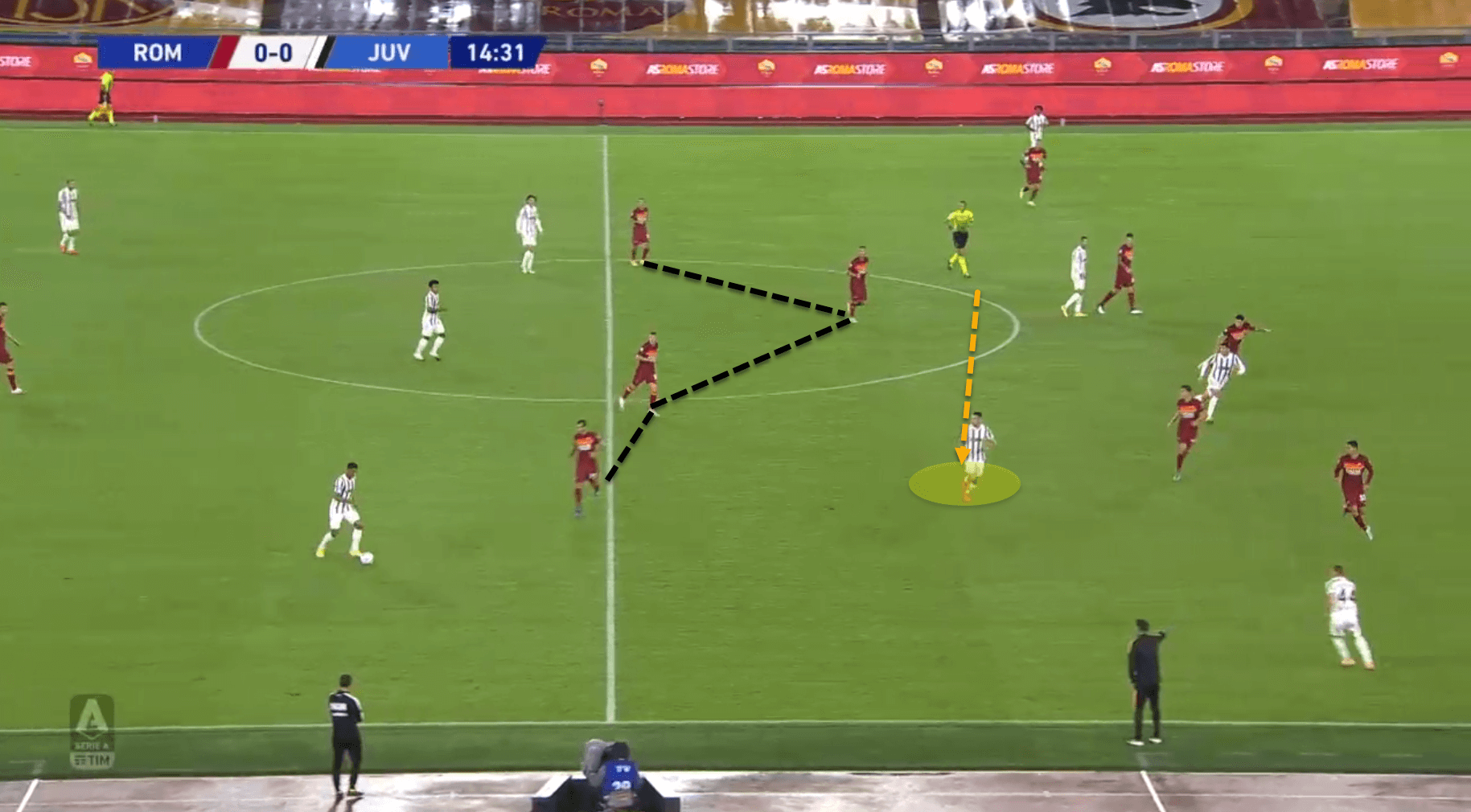 Prior to this screenshot, Ramsey had positioned himself in the central corridor and was looking to receive a pass in between the two Roma central midfielders. Regardless, Juventus circulated the ball to the wide centre-back as the central passing option to Ramsey was too risky. This meant that now the Welshman had to drop to the ball-side, and he positioned himself in the half-space, still between the lines, but was able to easily receive a pass to progress Juventus up the pitch.

It is not only during the build-up phase that Ramsey operates between the lines – as Juventus progress up the pitch, he also maintains his positioning in these spaces. 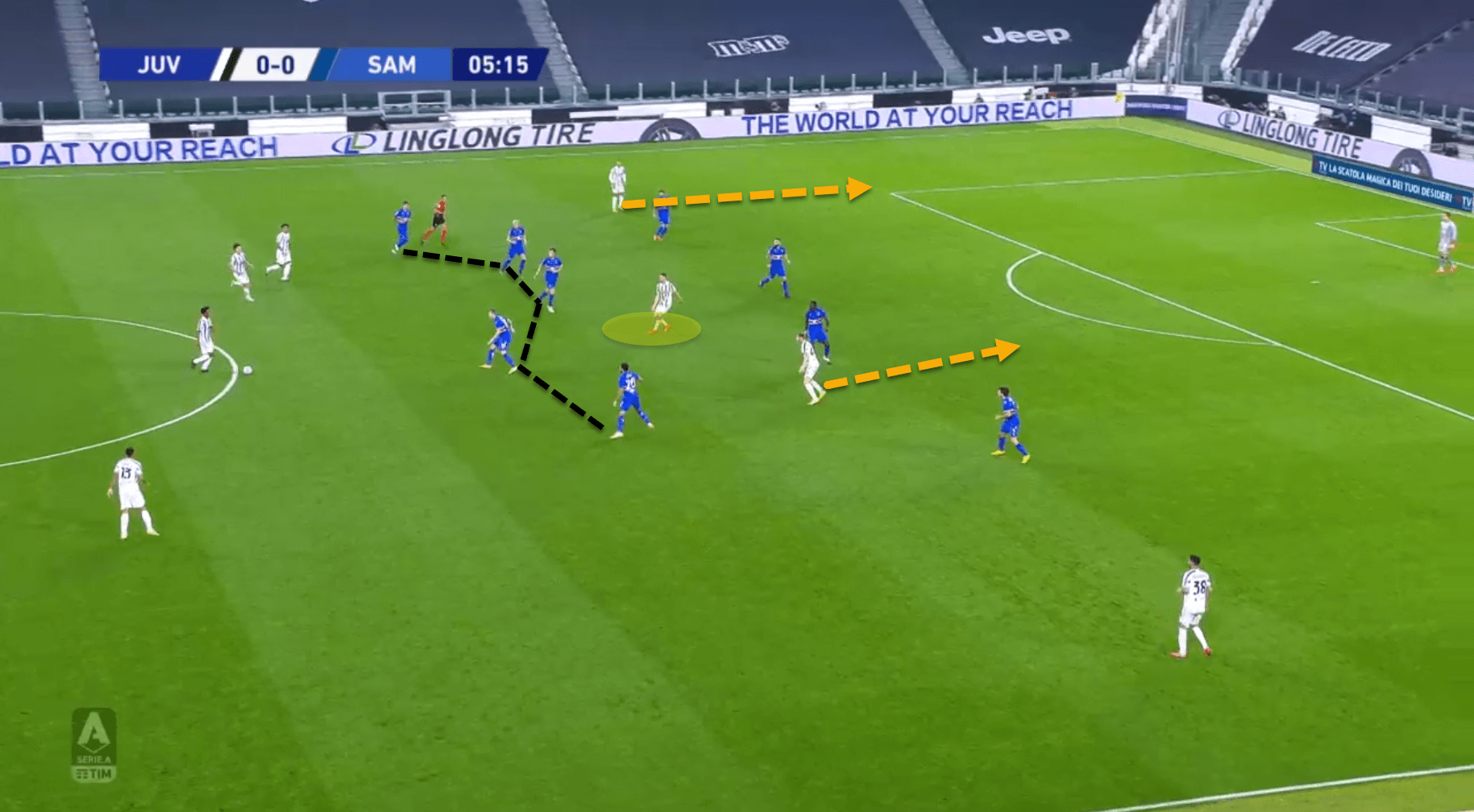 In this image, Juventus have progressed past the build-up phase of the attack and are now looking to start playing in the opposition’s final third. Ramsey has remained between the lines and is calling for a pass.

Sampdoria’s defensive block is extremely narrow and compact in this footage. Typically, when a side deploys a very narrow and compact defensive low block, the side in possession are forced to play the ball out wide as there is plenty of space in the wide areas. However, true to Pirlo’s UEFA Pro License thesis, the Italian manager wants his side to try and play centrally as much as possible as it is much more difficult for the opposition to defend the central areas rather than the wide areas.

Once Ramsey calls for a pass in these tight spaces, he entices one of the opponent’s defenders to rush out and close him down. This in turn leaves space behind the backline for Juventus’ other forwards to exploit, particularly Cristiano Ronaldo. In the example above, Dejan Kulusevski sees that Ramsey is open to receive the ball and has already started to move towards the offside line in order to make a run in behind if the Welshman does get the ball. 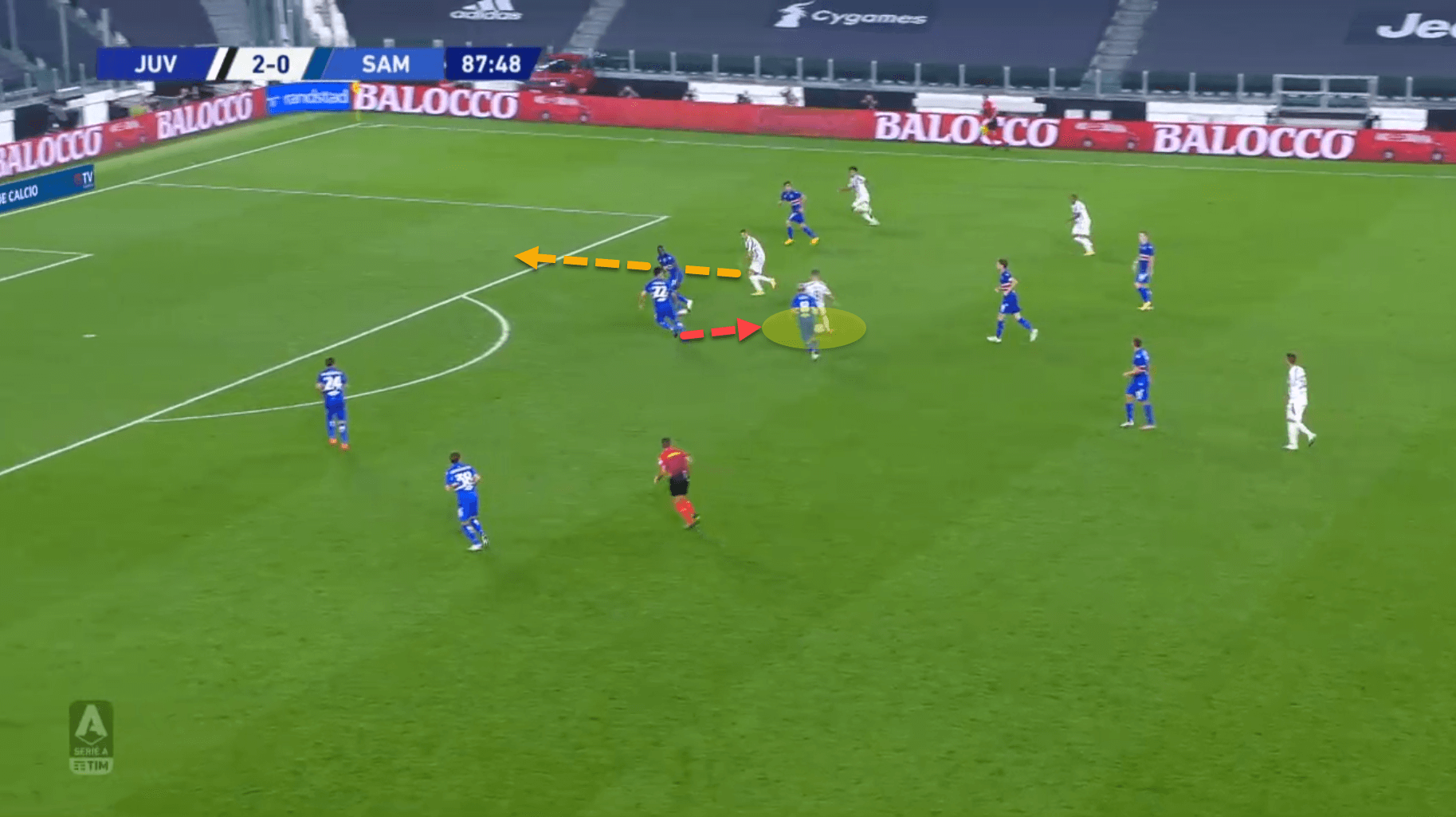 It is his positioning between the lines which allows him to reach these outstanding numbers.

Linking up in the wide areas

As stated before, Pirlo likes his side to build up through and play through the central areas when they have the ball in a structured attack. Regardless, there are times when playing through the central corridors is not possible and so they need a back-up plan to break through the opposition’s defensive line.

This back-up plan is to create one-twos in the wide areas, however as they do not deploy wingers, their only width is through their wing-backs. The closest attacking player to their wing-backs is Ramsey in the attacking midfield role, who players freely between the lines.

Depending on the ball-side, Ramsey will drop to create a one-two with the wing-back to try and break through the defensive line on the flanks. This combination play can be seen in the following still from in-game footage. 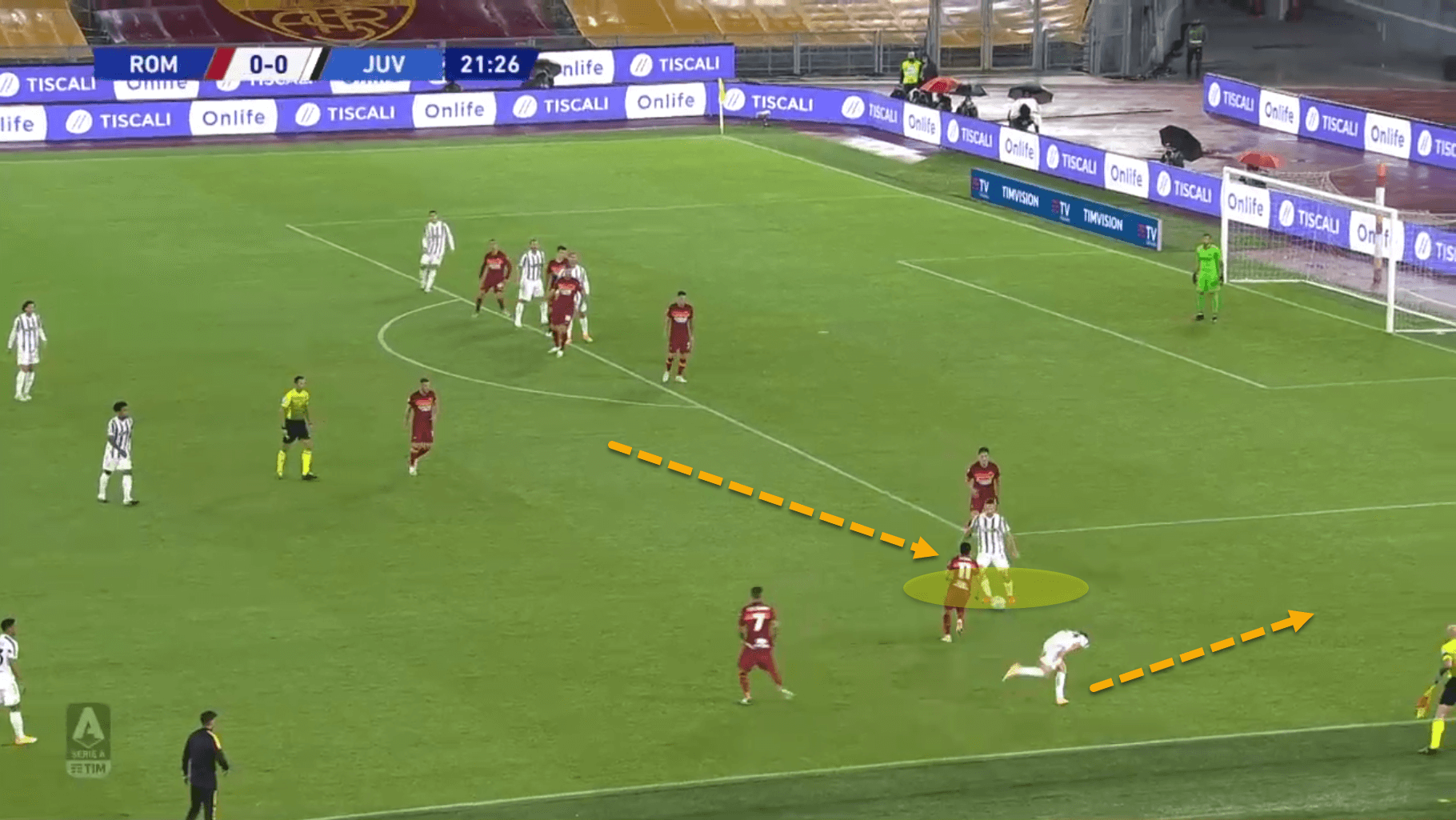 Against Roma in particular, this wing-combination play worked extremely well, but Juventus could not convert once the ball was crossed into the box. Juventus scored from this attack later in the game, however, Ramsey had been replaced by Rodrigo Bentancur.

One of the key attacking focal points in Andrea Pirlo’s Pro License thesis is that he wants his players to be quite flexible in their attacking play. This means that as much as he wants them to play beautiful possession football, he also wants them to attack the depth of the pitch by making runs with their forwards in behind the opponent’s backline.

Under his predecessor, Sarri, Juventus at times looked extremely one-dimensional and could be very monotonous and repetitive in their play. So far this season, I Bianconeri have been far more unpredictable, and whilst their opponents have to worry about Juventus playing through their defensive block, they now have the added worry of their forward line constantly making runs in behind.

Ramsey is integral to the application of this unpredictability, alongside Ronaldo and whichever forward Pirlo decides to partner him with, whether it be Kulusevski or Alvaro Morata. These three are not given set positions on the pitch and are extremely fluid in terms of their rotations.

These continual rotations make the forwards, including Ramsey, very difficult to mark as they have no set position. By attacking the depth, they are occupying the opponent’s defenders, which frees up space on the pitch for other players to attack into. 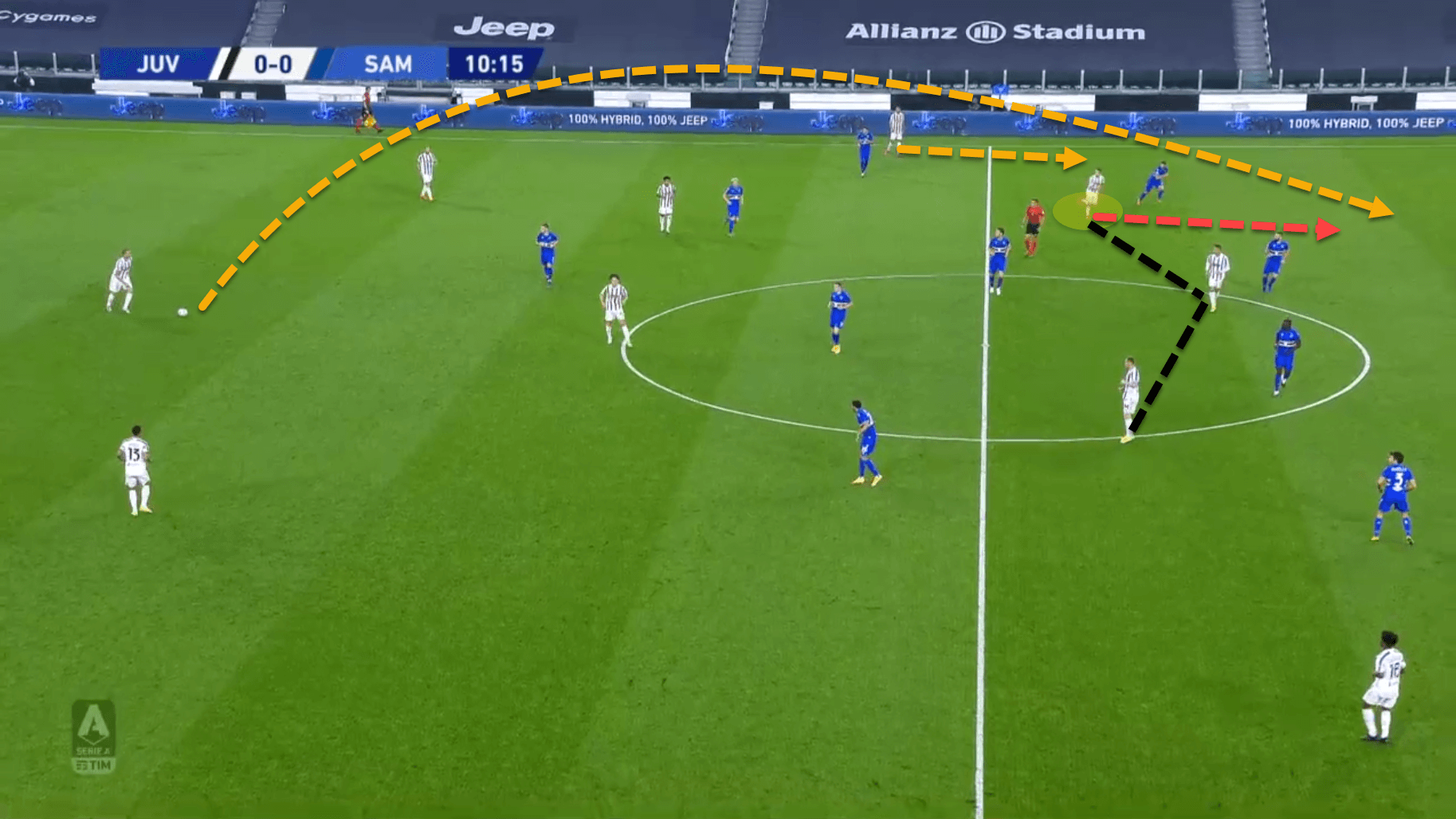 In the image above, Ramsey is attacking the space behind Sampdoria’s backline. The Sampdoria right-back is forced to follow Ramsey’s run as Bonucci is an excellent long-range passer and if the ball finds its man, Juventus will be in on goal. As the full-back is attracted to the run, it frees up a lot of space on the left flank for Juventus’ left-winger to run into and receive a pass.

These runs are not only important to allow Juventus to progress up the field quickly, but they are also extremely effective at creating space for other players, as can be seen above.

Ramsey is very efficient with these runs and averages 1.67 progressive runs per game in the 2020/21 season. The 29-year-old has also received more long passes than any other player in Serie A, which is a major testament to his brilliant runs.

Aaron Ramsey has not only been immensely efficient in terms of his offensive output, he has also been vastly important for I Bianconeri with regard to his defensive contributions to the team.

Pirlo wants his side to counterpress when they lose possession and they generally do this with two or three of Juventus’ nearest players. As well as trying to act as a progressive passing option, one of the main reasons that Ramsey is instructed to shift to the ball-side is to be close to the ball when Juventus lose it in order to be able to recover it quickly. 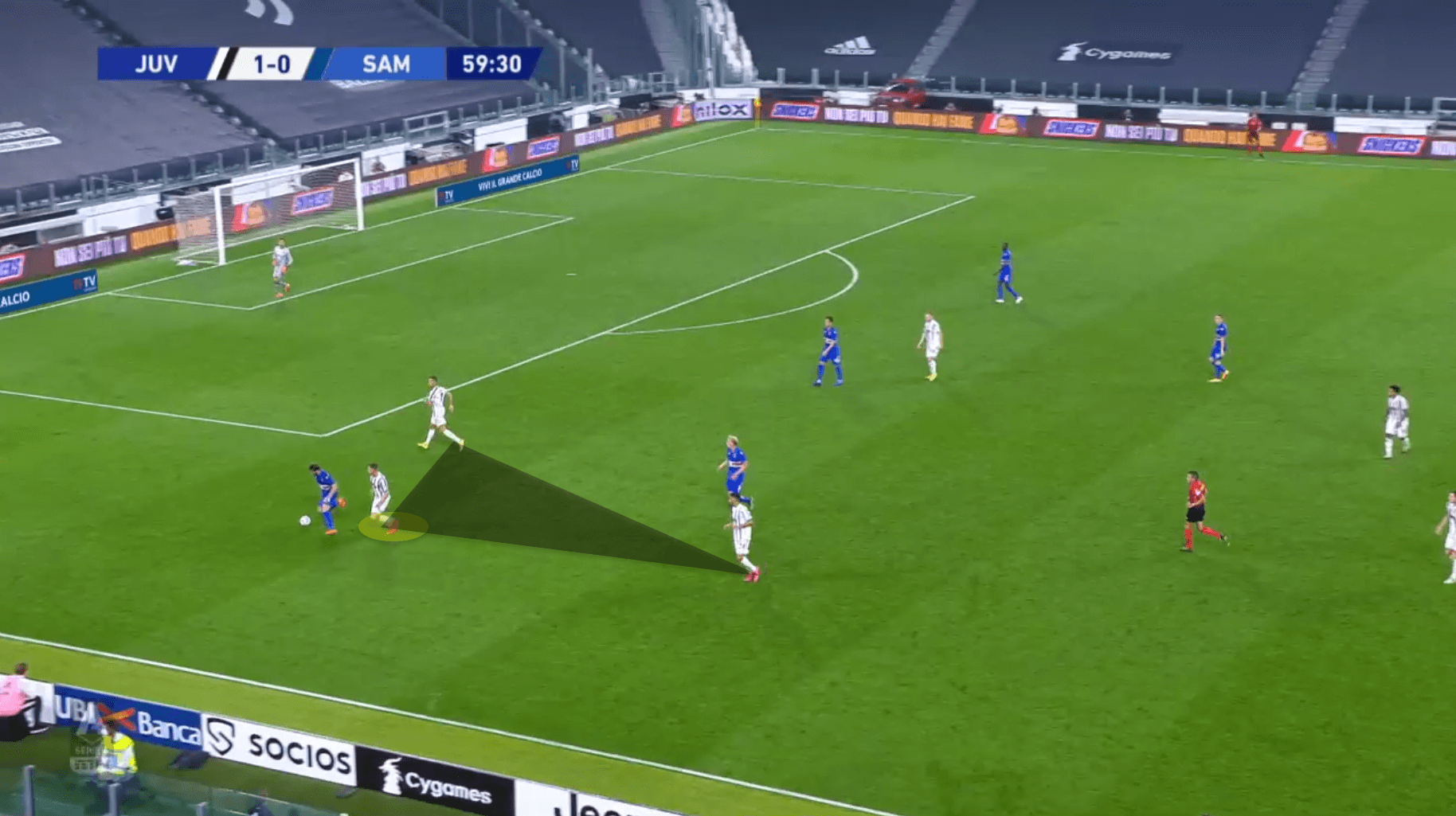 This image is an example of Ramsey’s importance in Juventus’ counterpress. Whilst his side were in possession, he had drifted to the wide areas in order to create combination play with the wing-back. Instead, he loses the ball but due to his positioning on the ball-side, he is able to quickly smother the ball-carrier whilst having two other players around him for cover.

During the defensive phases, Ramsey is also quite instrumental in pressing the opposition’s backline. Pirlo deploys a form of zonal and man-to-man marking in the high press. Ramsey’s role is zonal, whilst the two centre-forwards mark man-to-man. This can be seen in the following image. 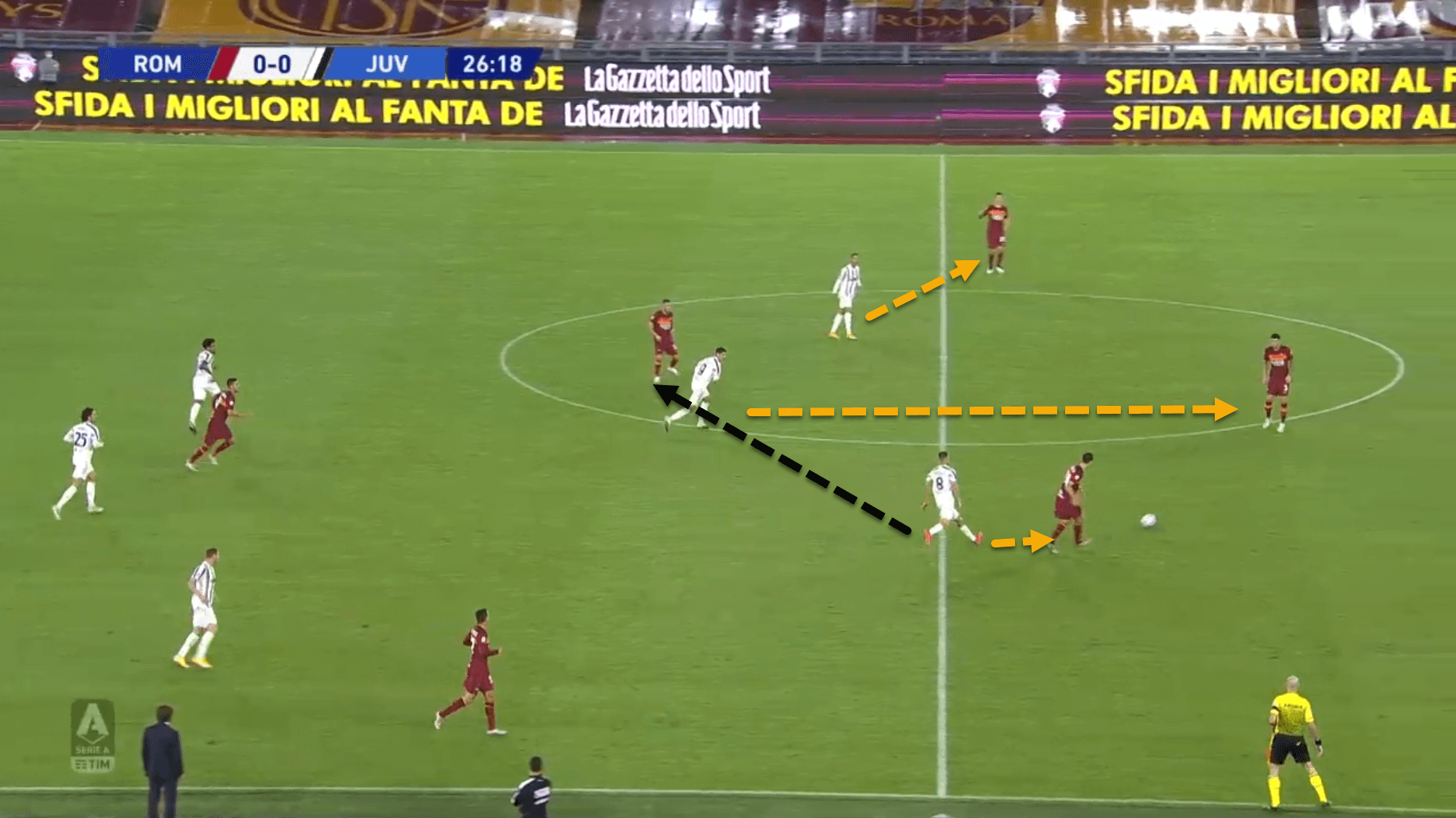 Cristiano Ronaldo and Morata each have a centre-back that they must press whilst Roma have the ball, however, Ramsey has two players that he must mark depending on the side of the ball.

As can be seen above, he has pressed the left centre-back, forcing him to play laterally. Once the ball is moved by Roma to the right centre-back, the Welsh international must now drop onto the opposition’s pivot player. Essentially, Ramsey must always press the free man.

Football is a very strange sport and will never fail to surprise you. When Pirlo took over merely a few weeks ago, Ramsey was set to be one of the first players offloaded in the summer transfer window. Now, he has been one of the most important cogs in Juventus’ set-up in possession as well as out of it. The Welshman seems to be enjoying his football under the new manager, which is uncoincidental to him gaining a more defined role at the club than he had under Sarri.

Juventus’ fans should be extremely pleased with his output so far and if he manages to continue this great run of form and stay injury-free, he could be the missing piece to their unsolved puzzle in relation to finally winning the Champions League after so many failed attempts for more than two decades.

Episode 10 of our World Cup Podcast Series is now live. Host Adam Scully is joined by Lucas Mondelo and […] After a two-and-a-half-year sabbatical from the sport, Ernesto Valverde finally returned to football to take his seat in a dugout […] 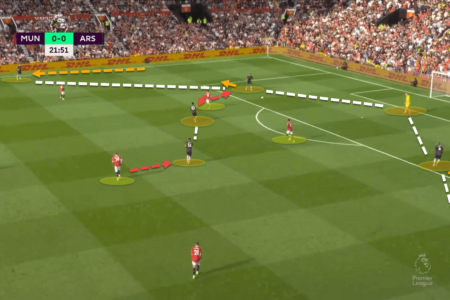 Albeit somewhat of an ode to a previous era, Manchester United versus Arsenal still remains one of the most bitter […]