With the popularity of formations such as the 4-2-3-1 and 4-4-2, a midfield double pivot is one of the most common structures found in modern football. The balance afforded by a double pivot lends itself to almost any style of football, from possession-based sides who use positional play, to sides that defend in a low block. In this tactical theory, I’ll go over the advantages and disadvantages of a double pivot in possession, particularly in the build-up phase. This tactical analysis will primarily use examples of tactics from José Mourinho’s Tottenham Hotspur, Paulo Fonseca’s AS Roma, and Hans-Dieter Flick’s Bayern Munich.

Advantages of a double pivot

Having two players instead of just one pivot ahead of the defensive line has several obvious advantages. The first of which being a simple numerical superiority. Many teams use their centre forward to man-mark their opponent’s single pivot, which cannot be done by just one player against a double pivot. The two analysis images shown below illustrate this, the first image shows how the passing lane from the ball-carrier to the single pivot is blocked by just one player. 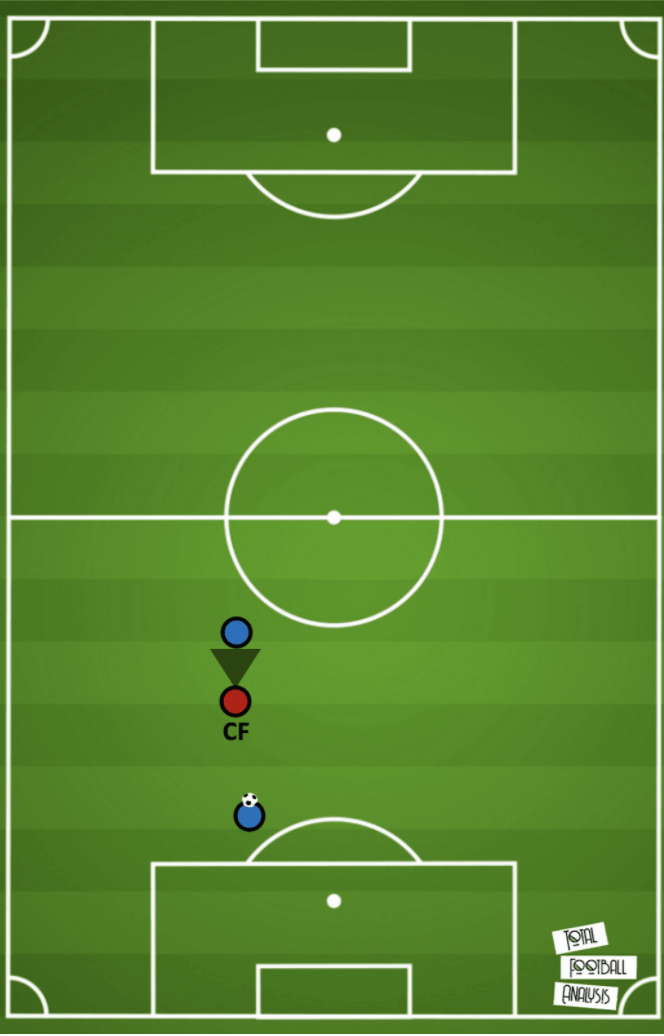 The second image shows how a double pivot can combat this by simply having an extra player. The opposing centre forward cannot mark both pivots, allowing the blue team to play out. 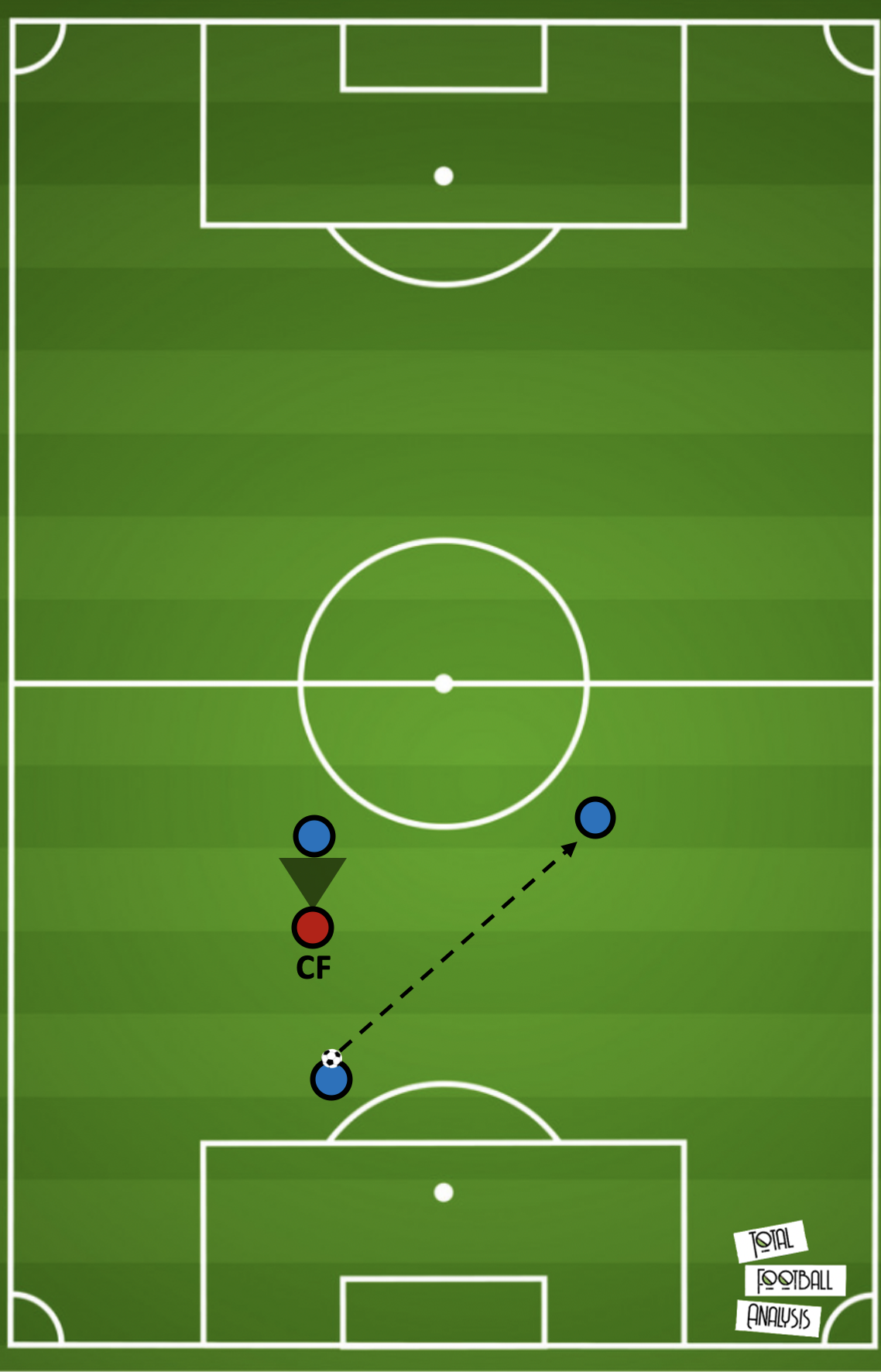 The other advantage is the extra coverage of width. If a single pivot wants to provide a wider passing option, then the other side is left open. This can force a team to be one-dimensional in regards to where they attack, especially if the pivot is their primary method of ball progression. We can see an example of this in the example shown below. The single pivot has shifted across into the halfspace to provide a passing option, forcing the play to be predictable and it can easily be pressed. 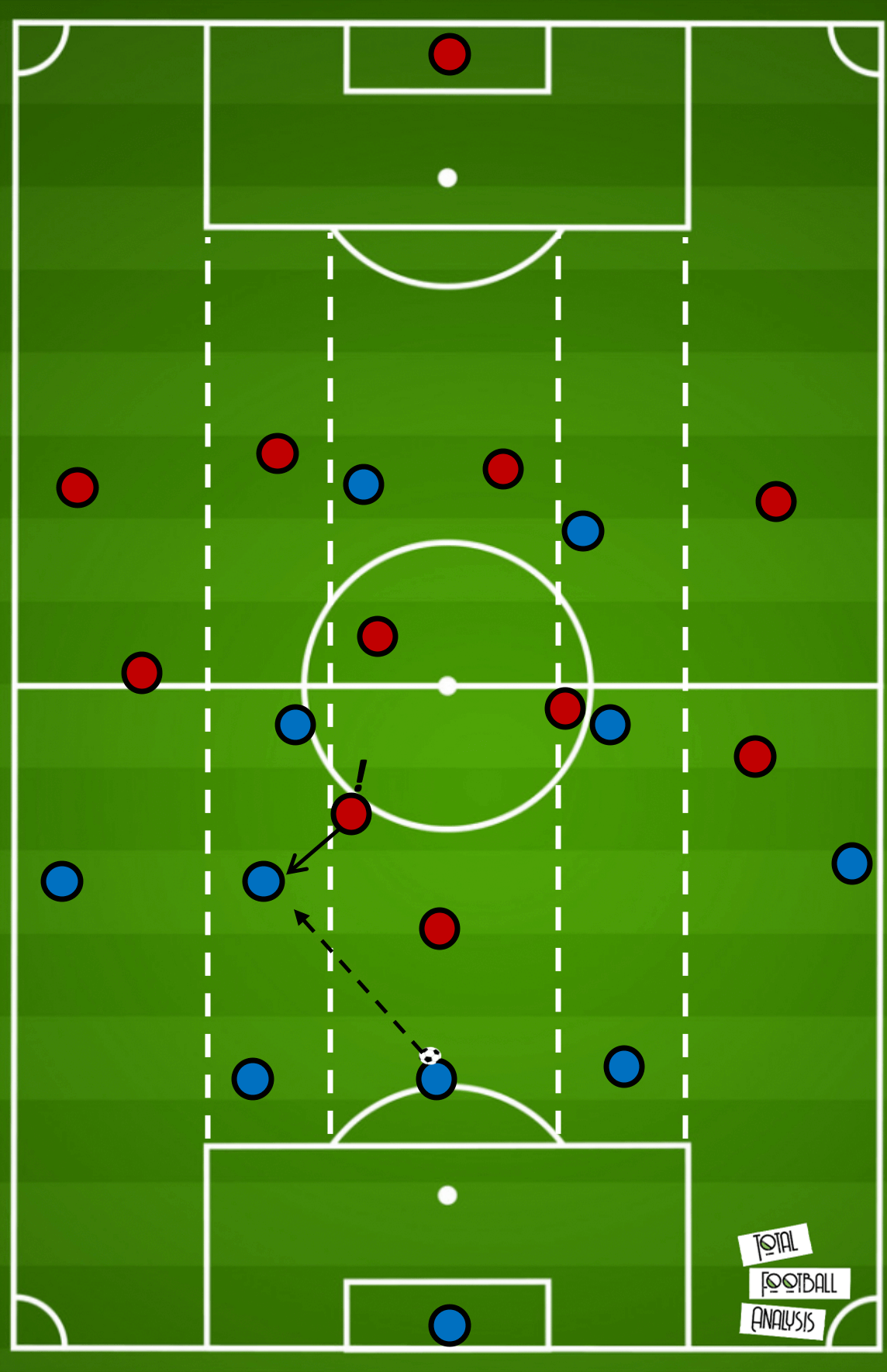 Once again, a double pivot can combat this. Using two pivots instead of one can allow the team to be more unpredictable. 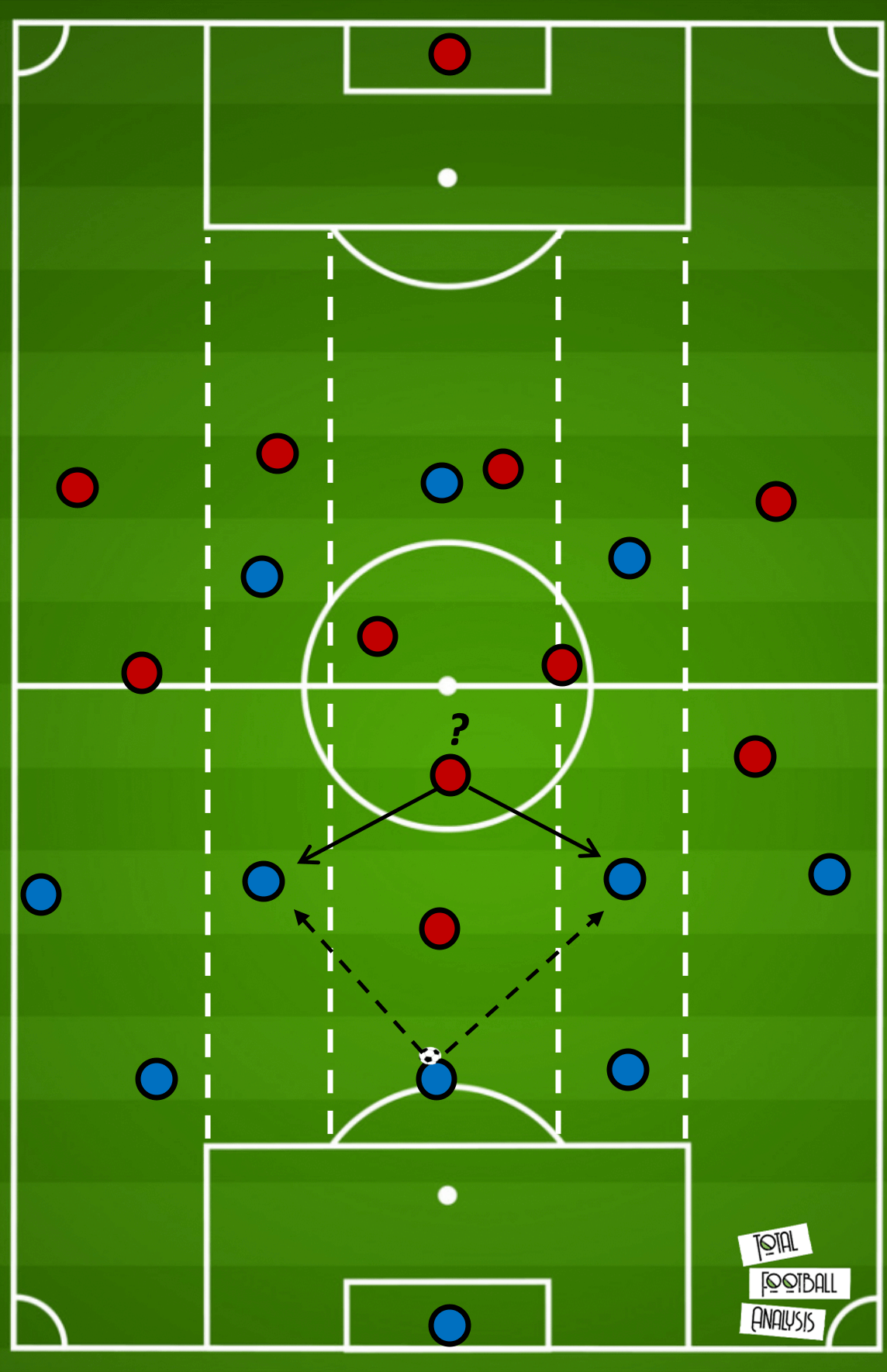 The examples shown above illustrate the most basic advantage of having a double pivot rather than a single pivot: more players. This advantage is quite obvious to see, and now that we’ve covered the basics, let’s take a look at some more advanced advantages making use of a double pivot. Note that there is enough potential material on this topic for a book and that the following examples are just some of the countless possibilities.

At AS Roma and Bayern Munich respectively, Fonseca and Flick have both used one of their pivot players to drop near or into the defensive line. Against teams that defend with a front two, this overloads the opponent’s first line. We can see this in the diagram pictured below, the blue team have dropped their pivot into their defensive line, creating a 3v2 overload against the red team’s first line of pressure. 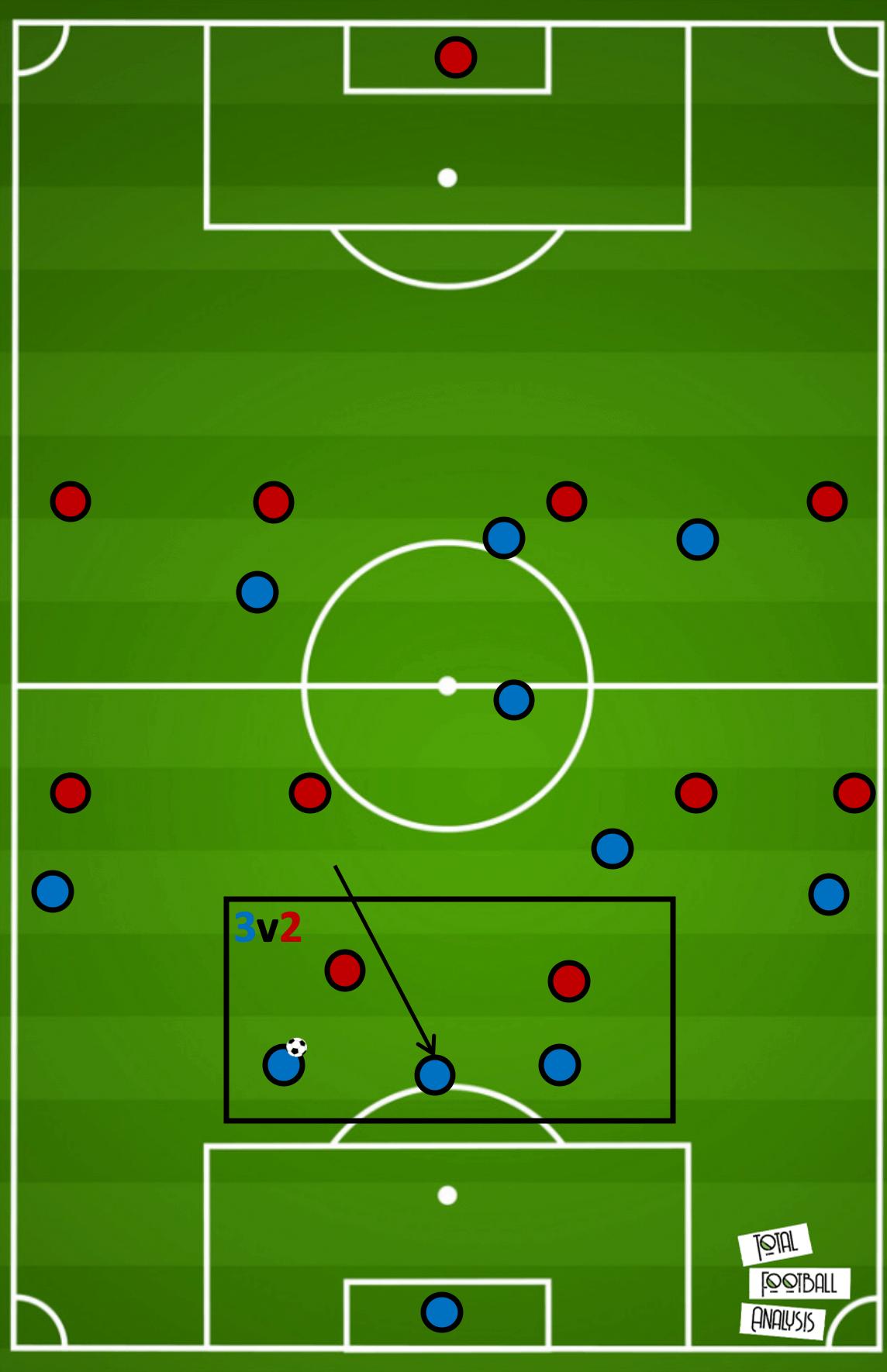 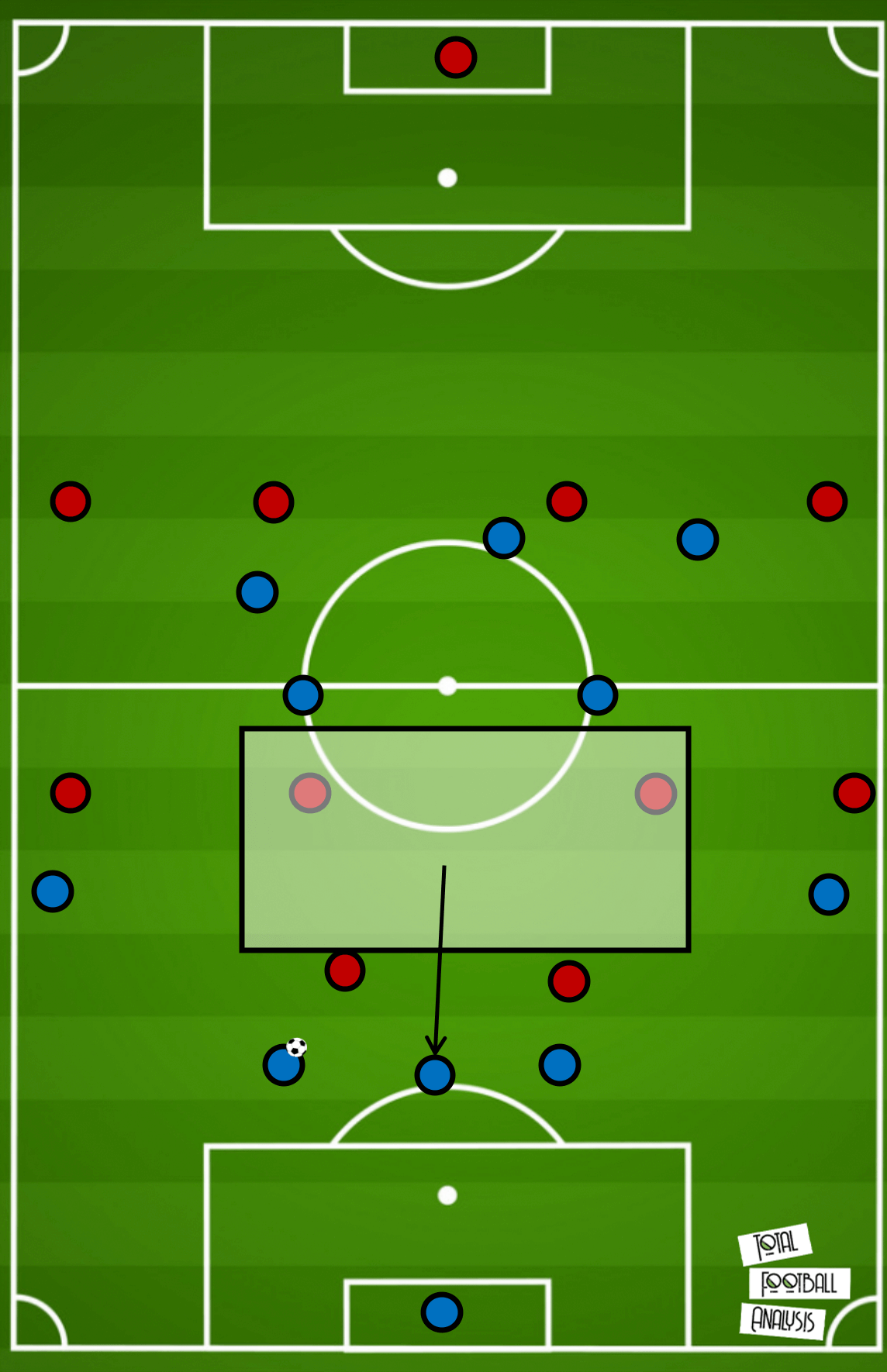 We can see an in-game example of this with Marseille under Villas-Boas. The single pivot (Kamara) has dropped into the defensive line, vacating the pivot space.

The obvious disadvantage here is that there are fewer options for ball progression via the midfield. This is not an issue if one of two pivot players drops into the defensive line, as there is still a presence in the pivot space. We can see this in the diagram shown below, the blue team have dropped one pivot into the defensive line, but due to the presence of an additional pivot player, the pivot space is not vacated. 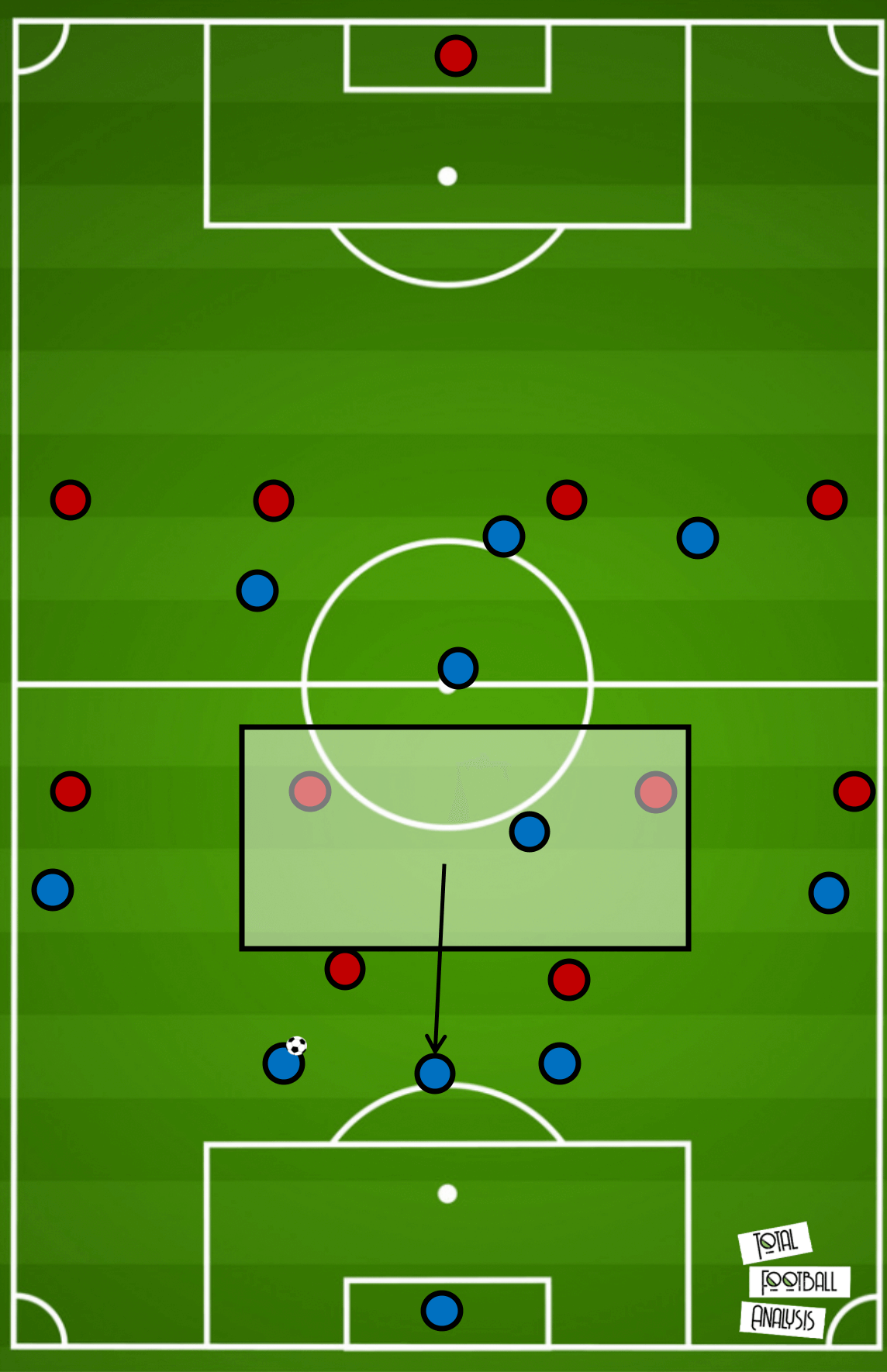 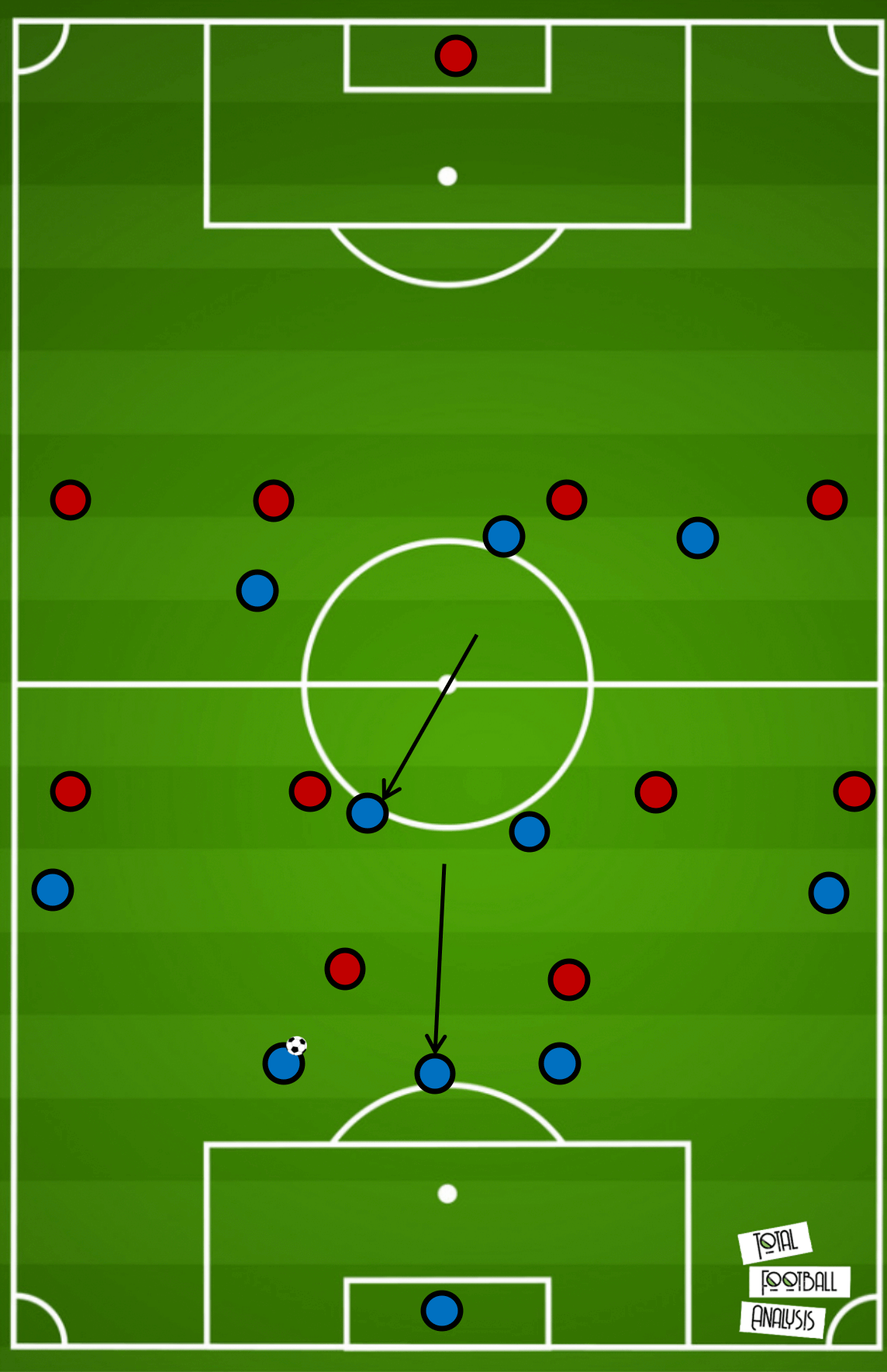 The two coaches I have highlighted for this section have both made use of this. Below, we can see an attacking midfielder from both sides – Bayern and Roma – drop into the pivot space after one of the original pivot players has vacated his position. In the first example, we see Kimmich drop into the defensive line for Bayern, while Coutinho replaces his position from attacking midfield, recreating the double pivot alongside Thiago.

In the second example, we can see one of the pivot players (Cristante) dropping into the defensive line for Roma, while the attacking midfielder (Pellegrini) replaces his position alongside the other pivot (Veretout). 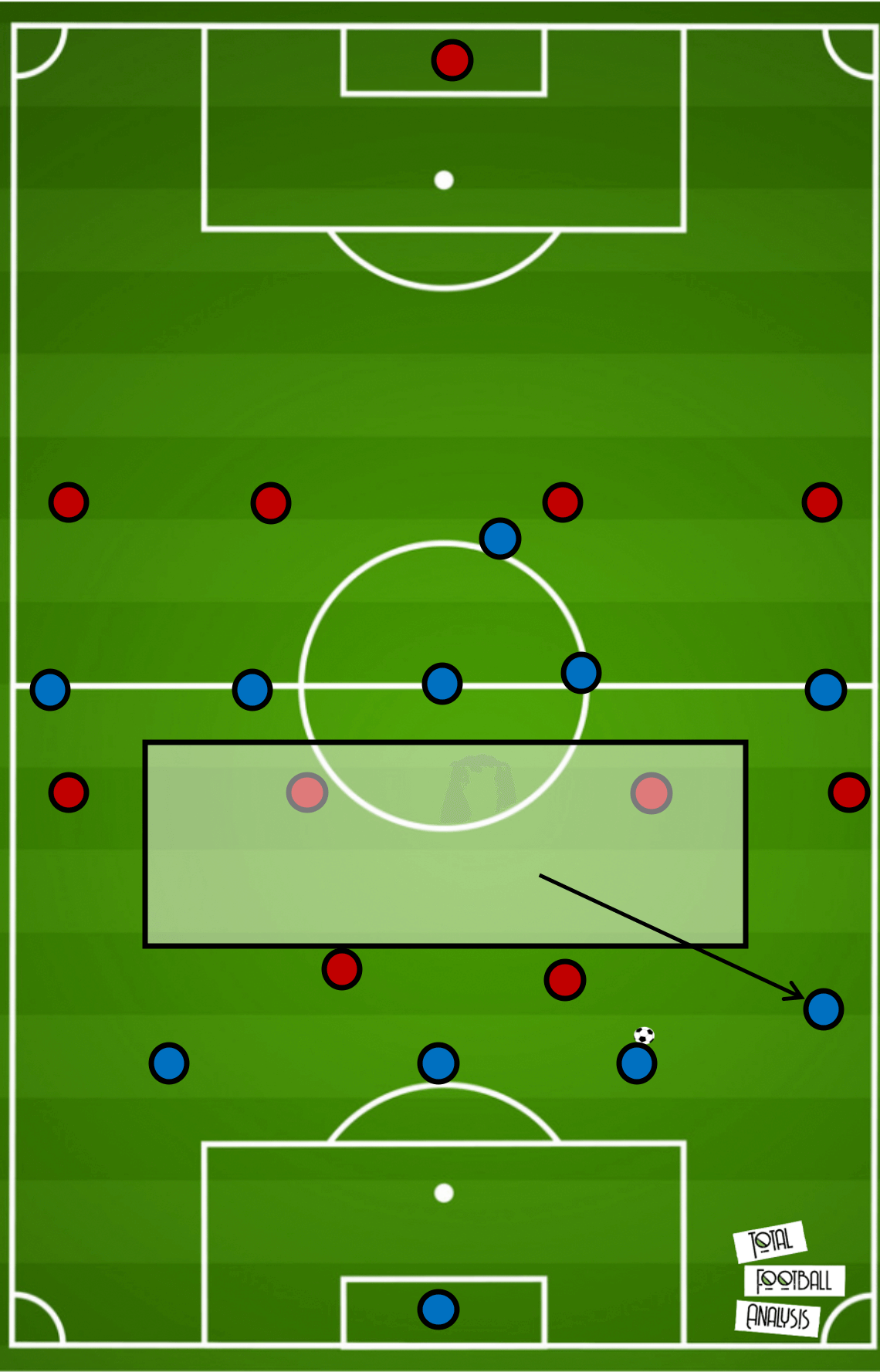 As discussed in the previous section, some uses of a double pivot are not unavailable with a single pivot, but they do not vacate the pivot space, providing a passing option. The use of a midfield player providing width in build-up is not nearly as common as the inverse, with a wide player tucking in centrally. Inverted wingers are arguably as, if not more common than traditional wingers now, while more teams are using inverted fullbacks to occupy the central areas.

Mourinho at Tottenham this season has made use of this. His build-up structure does not have natural width, so he uses his pivot player (usually the right-sided pivot) to drop into the fullback position. This could be done with a single pivot, but – as mentioned before – the pivot space will be vacated. We can see an example of this in the diagram pictured below. The sole pivot player provides width, leaving the pivot space vacated entirely.

Whereas a double pivot does not have this issue, as shown. One pivot player provides width, while the other is still occupying the pivot space. This has the advantage of providing width, while still having a passing option in the centre. 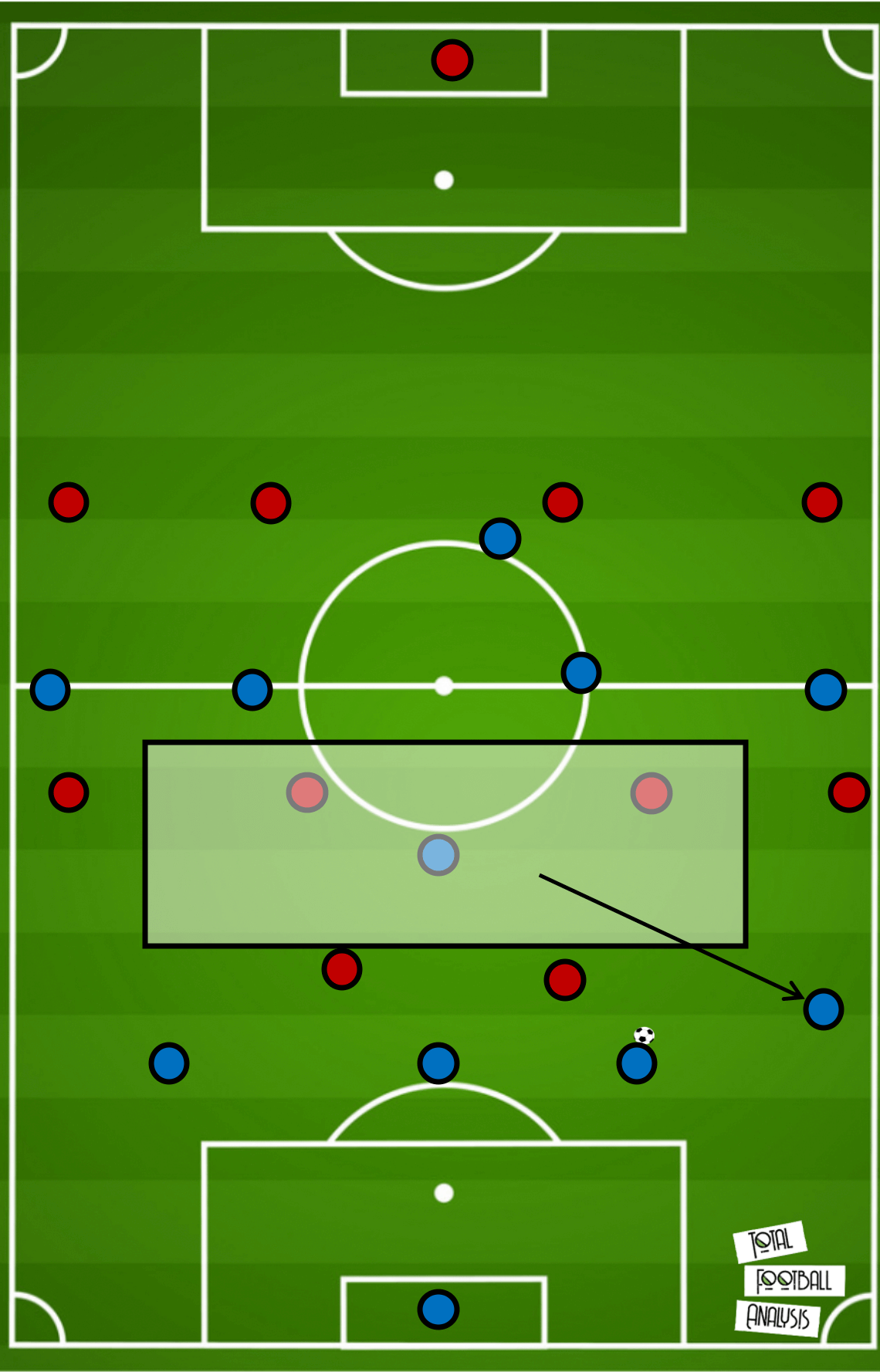 Using the same manager as the example, we can see something much more common with a double pivot than providing width: staggering.

Staggering – in the context of a double pivot –  is when the two pivot players do not occupy the same horizontal line. In the context of build-up, this usually involves one of the pivot players dropping deeper to provide a safe passing option, while the other pivot stays further forward, providing a more penetrative option. We can see this in the diagram pictured below, the double pivot is connected by the line between them. One pivot player provides a risk-free passing option while the other is in a more advanced position. 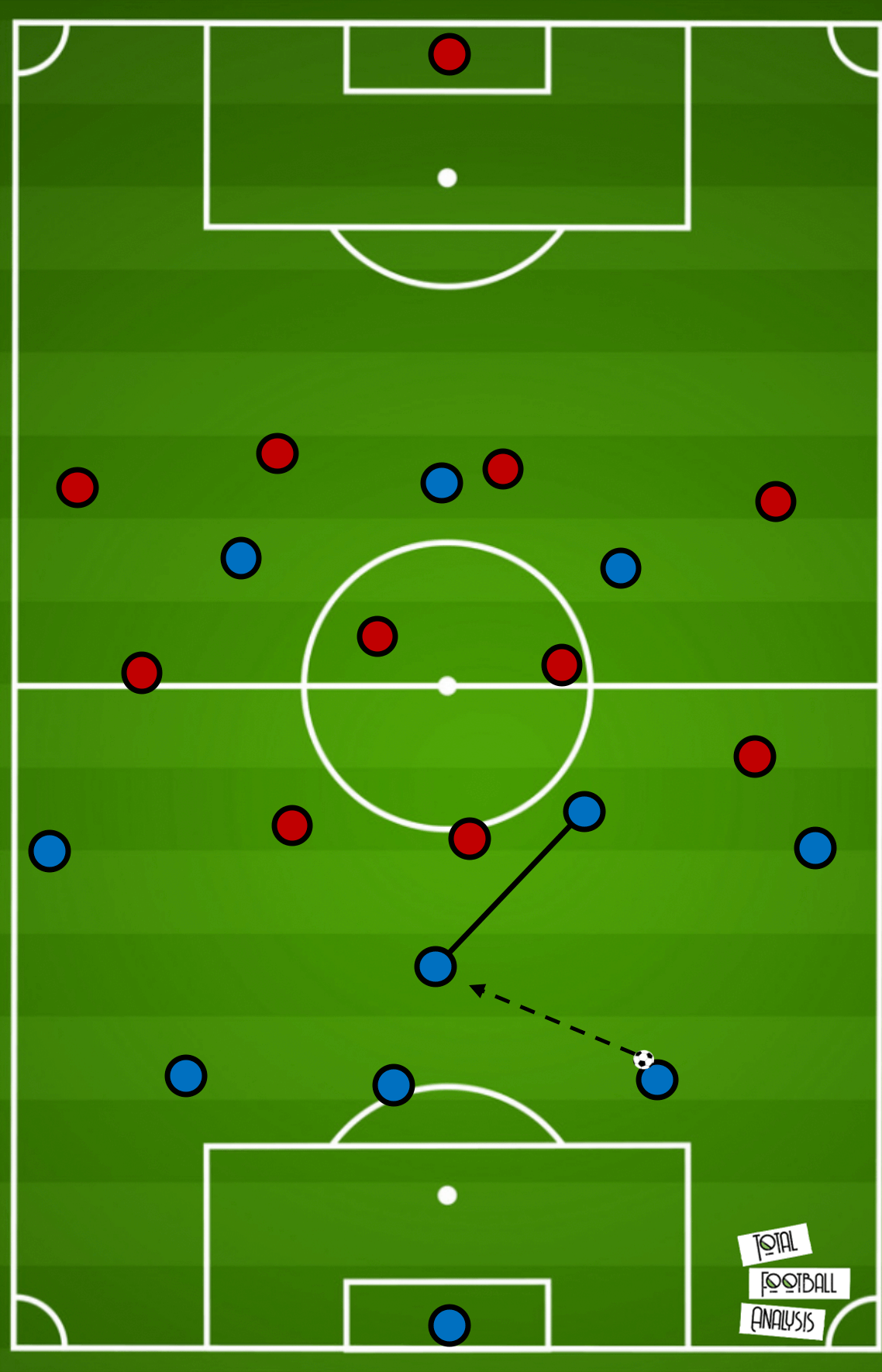 Against a team that utilises intense man-marking, a staggered double pivot can be used to intentionally create alternate passing angles, as shown in the diagram below. Both pivots are being tightly marked, and due to the staggering of the double pivot, creates a diagonal passing lane. 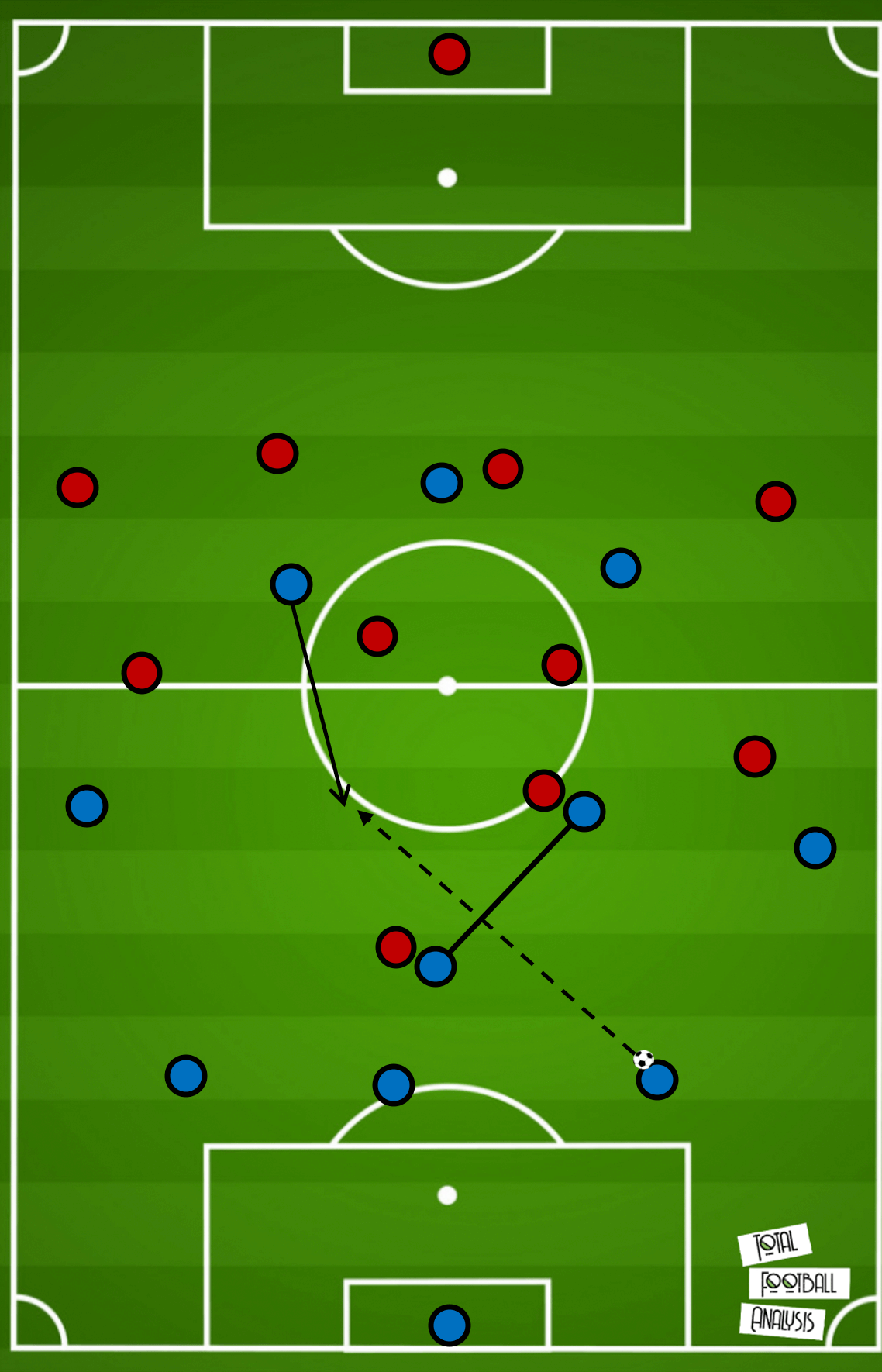 Having passing options on more than one line makes build-up via pivots much more effective and harder to stifle.

We can see an example of staggering in the image shown below. One pivot (Winks) has dropped off to provide a safe passing option, while the other (Sissoko) is more advanced.

In the case of Mourinho’s Tottenham, the lack of proactive movement from the more advanced pivot practically removes him from the game. This leaves the back three and the deeper pivot with almost no passing options into midfield. 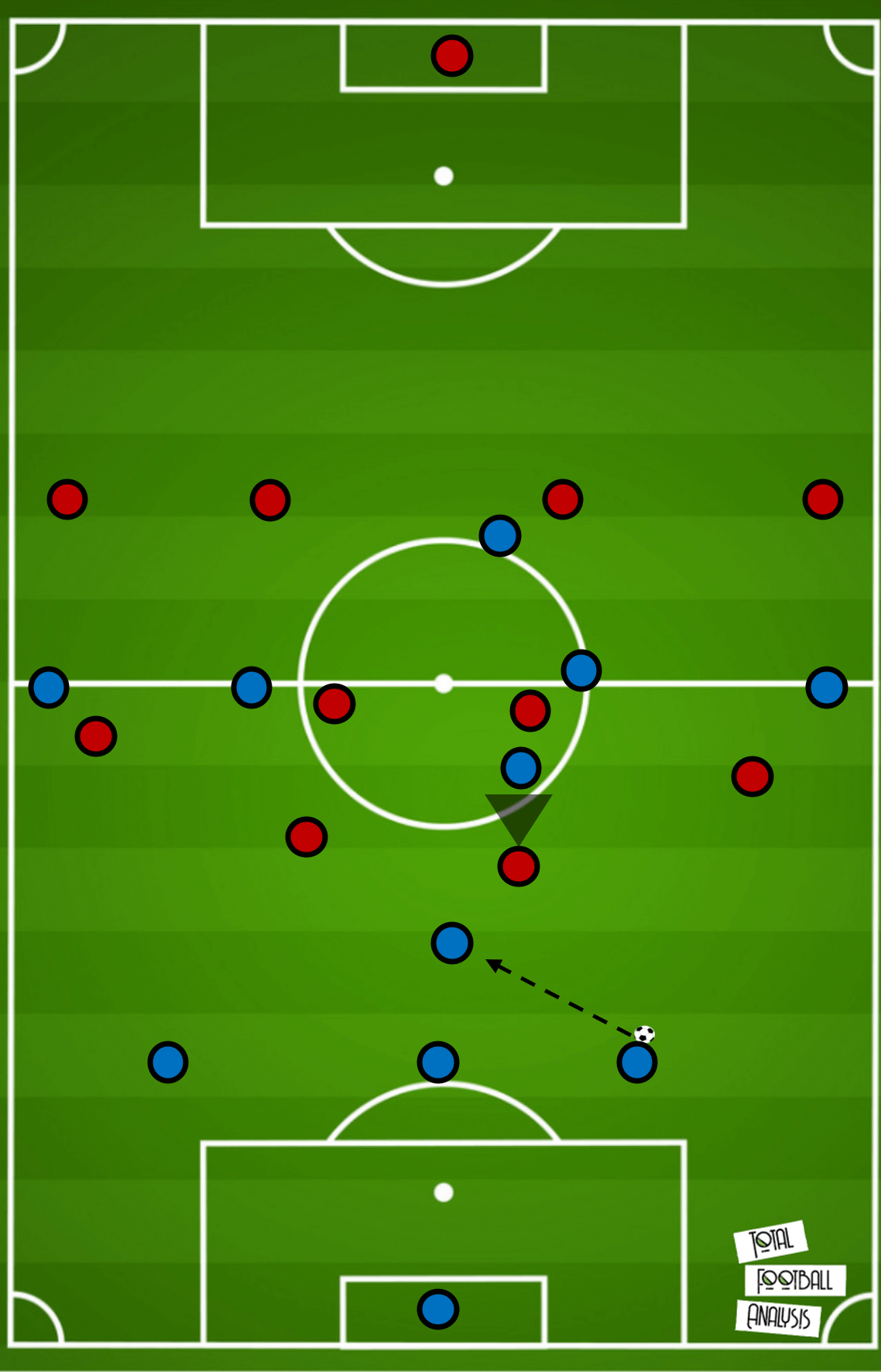 The double pivot is one of the most commonly used structures we see in modern football. It is used by teams all over the world and of teams of almost any standard. The use of two players just ahead of the defensive line in build-up has many uses, as seen in this piece. From simply utilising two players to overload the pivot space to utilising a pivot to overload the first line or to providing width – there are many uses for an extra pivot player.