Despite being one of Italy’s biggest clubs, AS Roma have not won a Serie A title since the 2000/2001 season. It is unlikely that the near 20-year wait will come to an end under in the near future, due to the dominance of Juventus over the previous decade, but Roma fans can be optimistic as their new manager, Paulo Fonseca, has a record of overachieving at clubs. He first took tiny Portuguese team Pinhalnovense to the Taça de Portugal quarter-finals in two consecutive seasons. Then, he led Paços de Ferreira to their debut season in the Champions League. Fonseca won the domestic double in each season he spent in Ukraine with Shakhtar Donetsk, while also beating Manchester City in the group stages of the Champions League. Fonseca certainly has the pedigree required to elevate Roma back onto the European stage, but how has he done so far in his first season?

In this tactical analysis, I’ll take a look at the attacking tactics used by Fonseca at Roma this season.

Fonseca has almost exclusively used a 4-2-3-1 with Roma this season, using it 81% of the time. 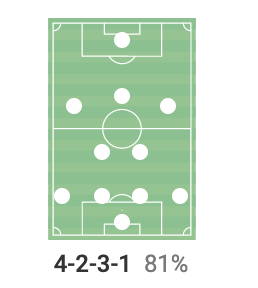 However, when building up their attacks, Roma use positional rotations to create a 3-2-4-1 shape. There are two variations of this shape. both of which play almost identically in the build-up, with the difference between them being how the shape is created from the preferred 4-2-3-1. Before we discuss the two variations of the 3-2-4-1 shape, let’s take a look at the general shape to see the main principles. 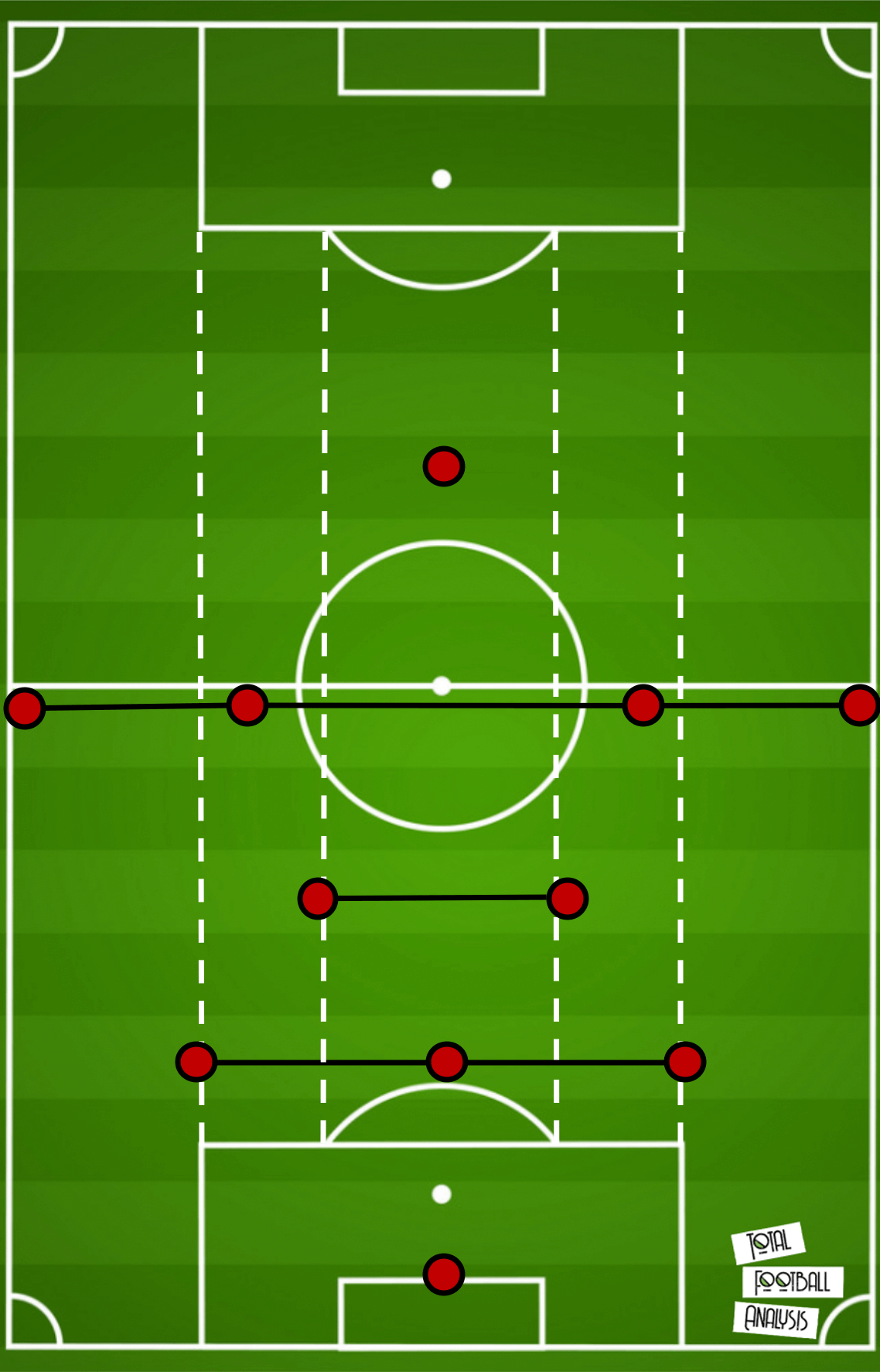 In the image shown above, we can see Roma’s 3-2-4-1 shape in the build-up. Regardless of how it is formed, it shares the main principles of the shape which are:

The first variation has the right-back push higher into the right winger’s position, the right-winger shifting into the right halfspace, the left-winger shifting into the left halfspace, while the left-back pushes into the left winger’s position. One of the two central midfielders will drop in between the centre backs to create a back three, while the attacking midfielder occupies the vacated position to recreate the double pivot. 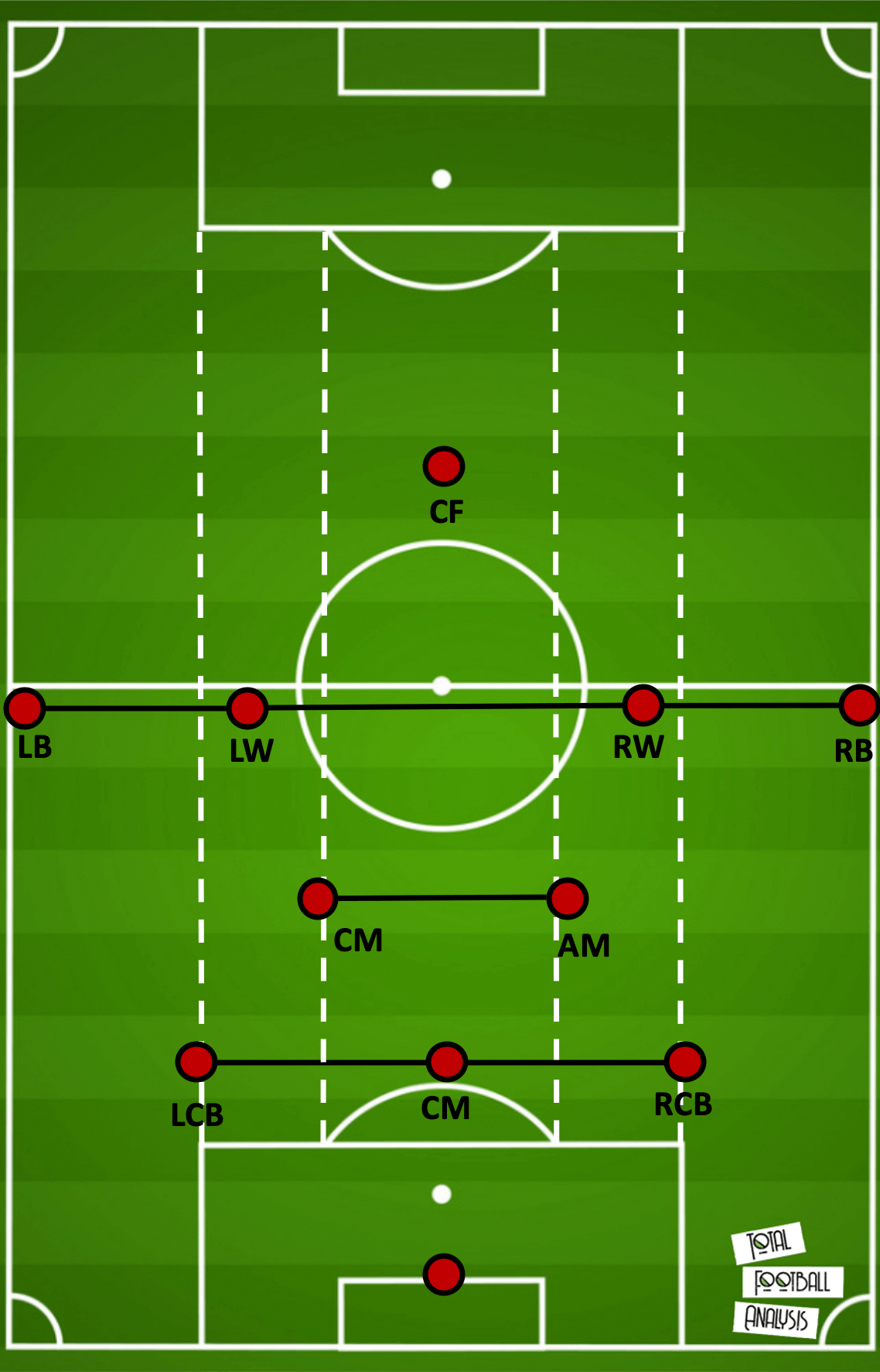 In the image shown above, we can see the first variation of the 3-2-4-1 shape. Although one of the central midfielders has dropped between the centre backs, the attacking midfielder has dropped to recreate the double pivot. Below, we can see an in-game example of this variation.

The second variation of the 3-2-4-1 has the left-back and left-winger performing the same roles as in the first variation. The difference comes with the right-back, central midfielder, attacking midfielder, and right-winger. The right-back stays in line with his defence, forming the back three. The two central midfielders hold their original position, maintaining the double pivot. The attacking midfielder occupies the right halfspace, while the right-winger occupies the right-wing. The image shown below shows this variation. With the shame shape formed with the only difference being who rotates where. 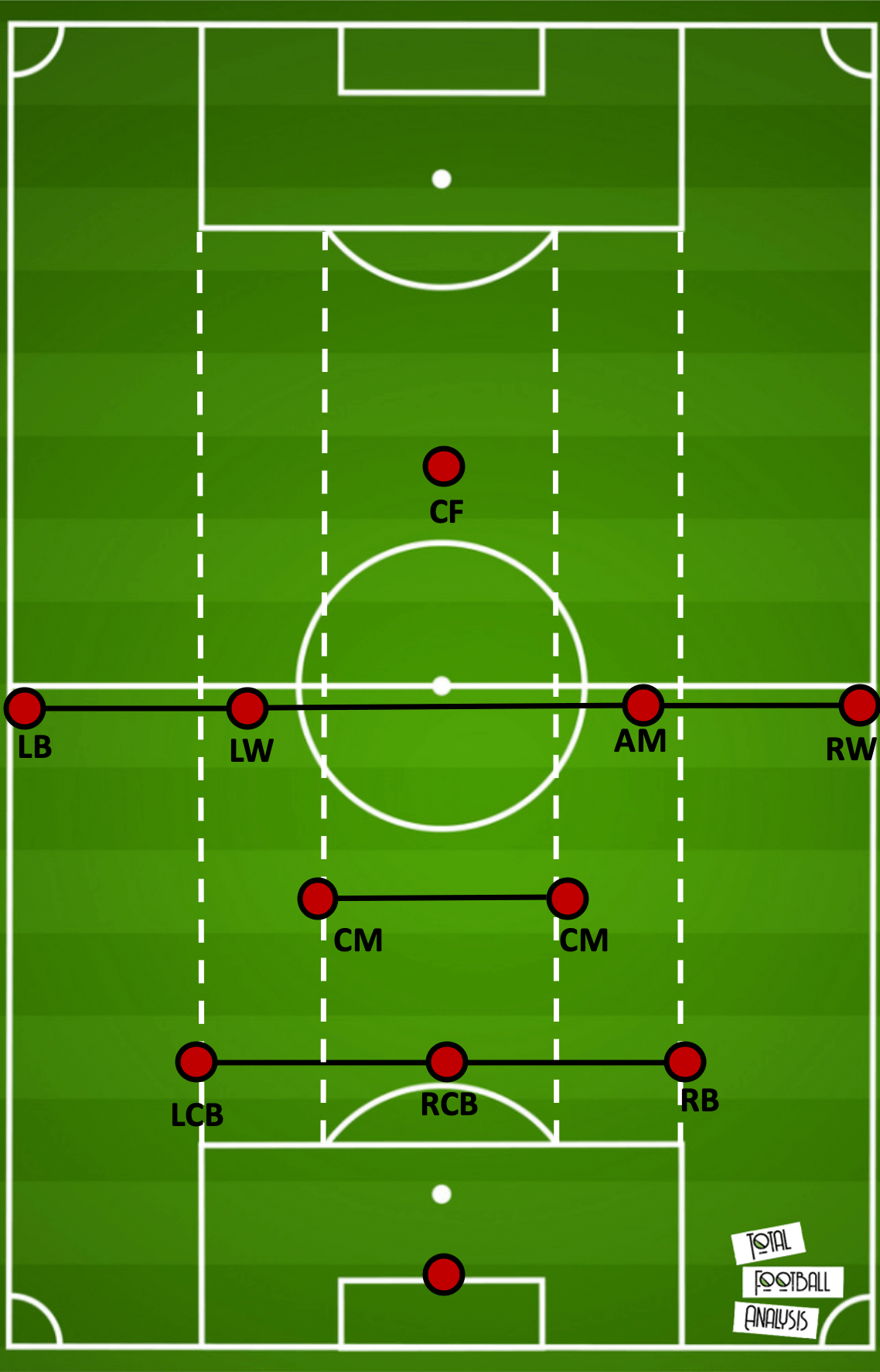 In the image shown below, we can see an in-game example of the second variation. The back three is composed of the right-back, and the two starting centre backs, while the double pivot is made up of the two central midfielders.

The players in the halfspaces and the double pivot are not in line, creating a trapezoid shape rather than a traditional midfield box.

Due to the near-permanent occupation of the halfspaces and wings – especially on the near side – Roma find it easy to play through the opponent’s press in these areas, and most of their play utilises width, with 70% of Roma’s attacks coming down either wing. 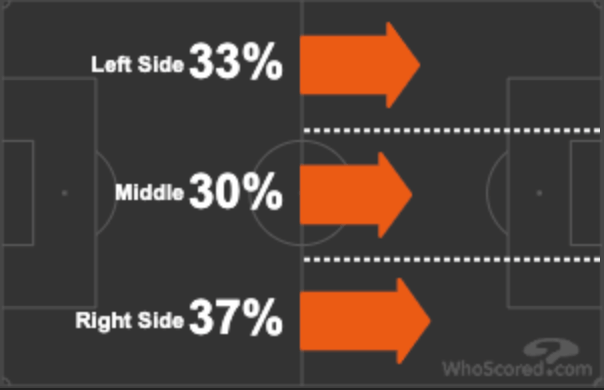 The back three shape allows the wide centre backs to interact in the halfspaces and wings with less risk in transition. Using the centre backs in wide areas help Roma create triangles out wide, with the players that create these triangles changing depending on how far advanced the attack is. The wide centre back will form the base of the triangle if he is within range, alongside the near side pivot and wide player. If the centre back is too far, the near side pivot, wide player, and whoever is occupying the halfspace will create the triangle. In the images shown below, we can see two examples of this triangle, with the centre back, left-back, and near side central midfielder creating it.

In some instances, such as the second example, the 3-2-4-1 is ‘broken’ in order to provide a passing option. The central midfielder steps out of his position in the backline to create the triangle. 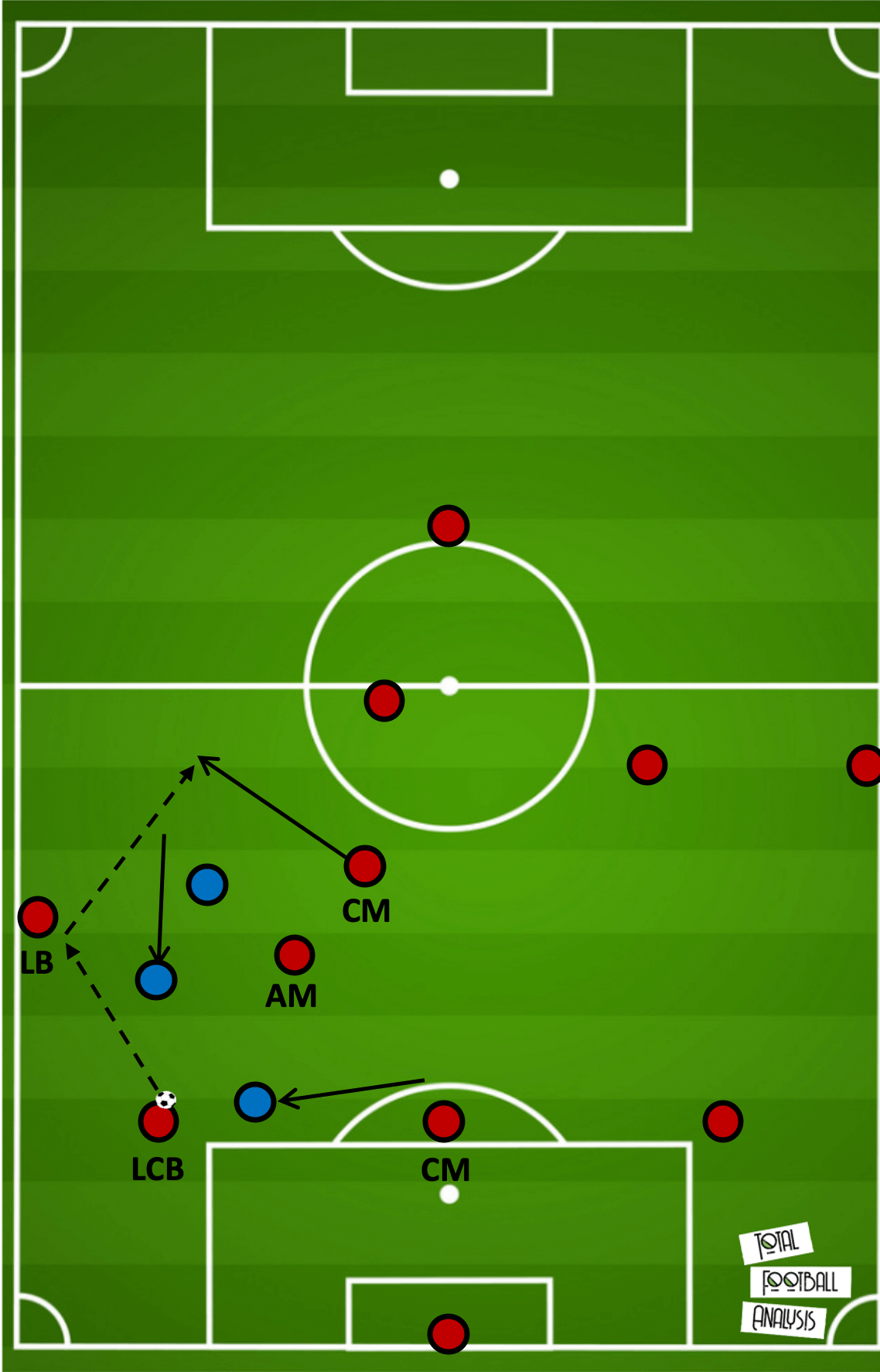 In this case, Roma are using the first variation of the 3-2-4-1, the attacking midfielder, left centreback and left-back have created a triangle. Gent have 3 players within the triangle, so Roma use the central midfielder to create an overload by having him make a run to the touchline.

When needed, Roma will utilise dismarking methods to create space. A common method used by many teams, including Roma, is having one player drop from an advanced position to a deeper one, while another deeper player advances. We can see an example of this below in the diagram and in-game example. 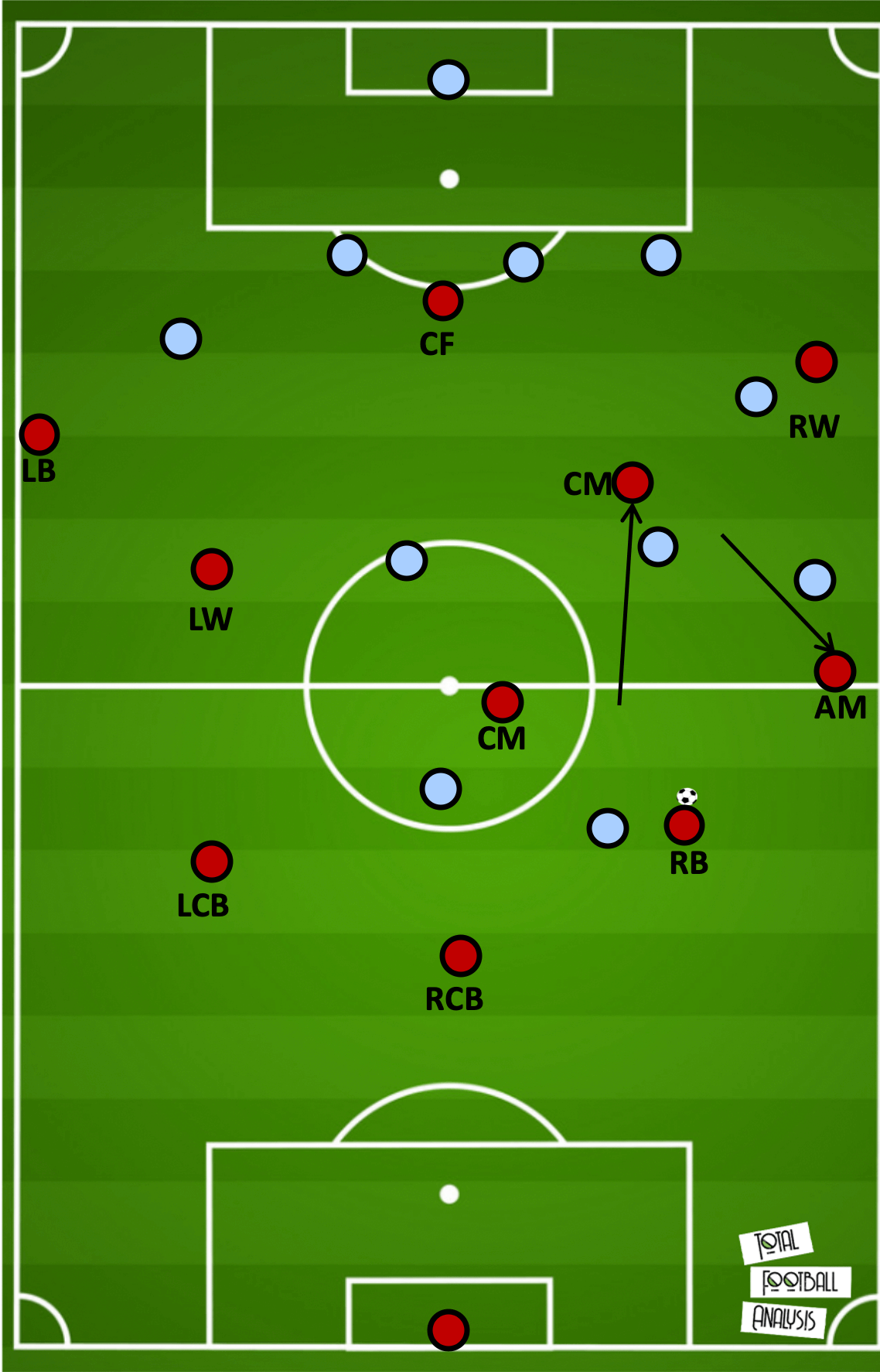 Interactions between attackers in the final third

The image below shows an in-game example of the 3-1-6. We can see the far side player (the left-back) has space due to how the opposing defenders have shifted across.

Having so many players across the forward line allows Roma to occupy all 5 vertical corridors (both halfspaces, both wings, and the centre). Due to their preference of attacking using width, the opponent will be dragged across to one side, giving players on the far side space to receive the ball.

As Roma’s wingers usually play on the opposite side to their strong foot, they use overlapping runs as decoys to create space to either cut in or cross on their strong foot. In the example pictured below, we can see the right-back overlapping the right-winger, dragging two opponents with him and creating space for the winger to cut inside.

Roma’s offensive transitions are not unlike many teams who play a 4-2-3-1. If they’ve won the ball in the middle or final third, the front four will move fluidly, disregarding their original positions and attempting to find space. How the team behaves in offensive transition is dependant on which player has won the ball. If the centre forward wins the ball, he will usually try to lay it off to one of the attacking band of three behind him, as the profiles of Roma’s centre forwards (Džeko and Kalinić) does not suit them on the ball in a pacy transition, they are much more efficient when acting as target men. If the wingers or attacking midfielder regain the ball, they will either look to dribble or feed each other in as they make runs in behind. In the example pictured below, the attacking midfielder dribbles, attracting pressure which creates space to play in the left-winger, who scores.

When players who are not part of the front four win the ball, it depends where on the pitch they are and which passing opportunities are available. A recovery in the final third is more likely to lead to sustained possession rather than a counter-attack, but if a dangerous passing option is available that will be the priority. Due to the heavy rotation used in Roma’s offensive system, a player’s position while defending is often very different to their position while attacking, so Roma often prefer to allow their players to get in their offensive position by recycling the ball, usually among the double pivot and centre backs. In the example shown below, the ball is recovered and Roma choose to recycle possession by passing to a centre back rather than counter-attack in order to allow their attacking players to get in position.

Fonseca is only his second managerial job outside of his native Portugal, since joining Roma from Shakhtar Donetsk in the summer he has already imprinted his philosophy and a clear tactical system at the Stadio Olimpico. When the Serie A season was suspended, Roma were well and truly in the race for top four, sitting three points behind 4th placed Atalanta. Even if Roma do not achieve Champions League football for next season, Fonseca is building a long term project in the Italian capital and I wouldn’t be surprised if I Giallorossi become much more of a force in the domestic and continental game over the coming seasons, regardless of their chances of winning major silverware.