Arsenal, for once, are enjoying a good transfer window. Although having left most of their business late, the club had been working behind the scenes with a clear sense of purpose. As if securing the signings of William Saliba and Dani Ceballos was not enough, Arsenal then went on and brought in Nicolas Pépé for a club-record fee of 80 million pounds. The signing came as a shock to most fans and neutrals alike as nobody had expected them to sign the Ligue 1 break-out star. In this tactical analysis, we’ll provide you with a comprehensive scout report on the 23-year-old Ivorian winger and what value he’ll add to the north-London club.

Lille usually lined up in a 4-2-3-1. Theirs was not a possession-heavy brand of football. Instead, they focused more on finishing high-quality chances created mostly during counter-attacking situations. The team didn’t have a particularly rigid structure in-possession. The attacking quartet was given the license to drift around in the opposition’s half. Chances were created usually through dynamic superiority – combination play, fluid attacking structure, and often times through individual brilliance.

Pépé was a big part of this. He was the most influential attacking player for Lille and hence, often times the entire attacking mechanism was built around him and his movement. In the following analysis, we’ll discuss what qualities those were exactly in greater depth.

Nicolas Pépé is a left-footed player who starts out on the left wing for Lille. His area of operation is usually what you’d expect from a modern winger – the wide left flank and the left half-space. Pépé’s dribbling style is based on body feints and he’s mastered the zero-to-sixty acceleration. Often times in matches, he simply traps the ball at his feet and allows the press to come to him. Once that happens and he is shielding the ball, he explosively changes direction and exploits the space the defender just left behind.

Apart from that, he also relishes the job and excels at taking a defender on 1v1. A style reminiscent of Arjen Robben, he begins by showing the defender outside and threatening to beat him using his pace. However, when the defender reacts to cover that angle, he immediately cuts inside.

This is seen in the picture below. Notice how Pépé’s original position was out wide but he decides to cut inside. His movement is met by a counter-movement of his striker – who drops deeper to link up play. From there the two play a quick give-and-go and Pépé enters a good shooting position. It is indeed this quick movement started by Pépé that collapses opponent’s defensive structures and ensures that he’s able to enter dangerous zones – in this picture, he’s able to get off a shot. However, once he’s entering infield, a host of options open up for him besides shooting – playing a through-ball, playing a switch to the other side, or even reversing a ball back to his own full-back which breaks the grain of the press.

Although not tasked with build-up responsibilities, Pépé gets on the ball a lot. When Lille have the goal-kick, Pépé drops deep to collect the ball, usually from a simple vertical pass up the flank from his full-back. He still provides width. When progressing from the deeper areas, Pépé uses the by-line to quickly move up through the thirds. However, once he’s past his own half, he prefers to cut inside onto his stronger foot as discussed above. Indeed Pépé rarely if ever uses the by-line to dribble past his opponent – preferring the central areas from where he has much more options. This is also evident in how he hardly attempts any open-play crosses – 0.4 crosses per 90 to be precise. This suits his inverted-winger style and allows him to develop into a much greater over-all threat as it also brings into action his –

Pépé has near-elite level shooting stats despite playing in a team who don’t dominate possession. At the beginning of the 2018/19 season, he was taking more than 4 shots per 90 and having a total of 0.4 xG per 90. His shot volume has now slipped to 3.39 which is still in the 85th percentile in all of Europe. Part of this is due to the tactics of the team, which are geared towards getting the best out of his offensive capabilities. We can see this in the example below. Pépé carries the ball infield and his movement is immediately followed by his team-mate vacating the zone-14 area. These rotations create confusion for the opposition markers and also creates space centrally for Pépé. 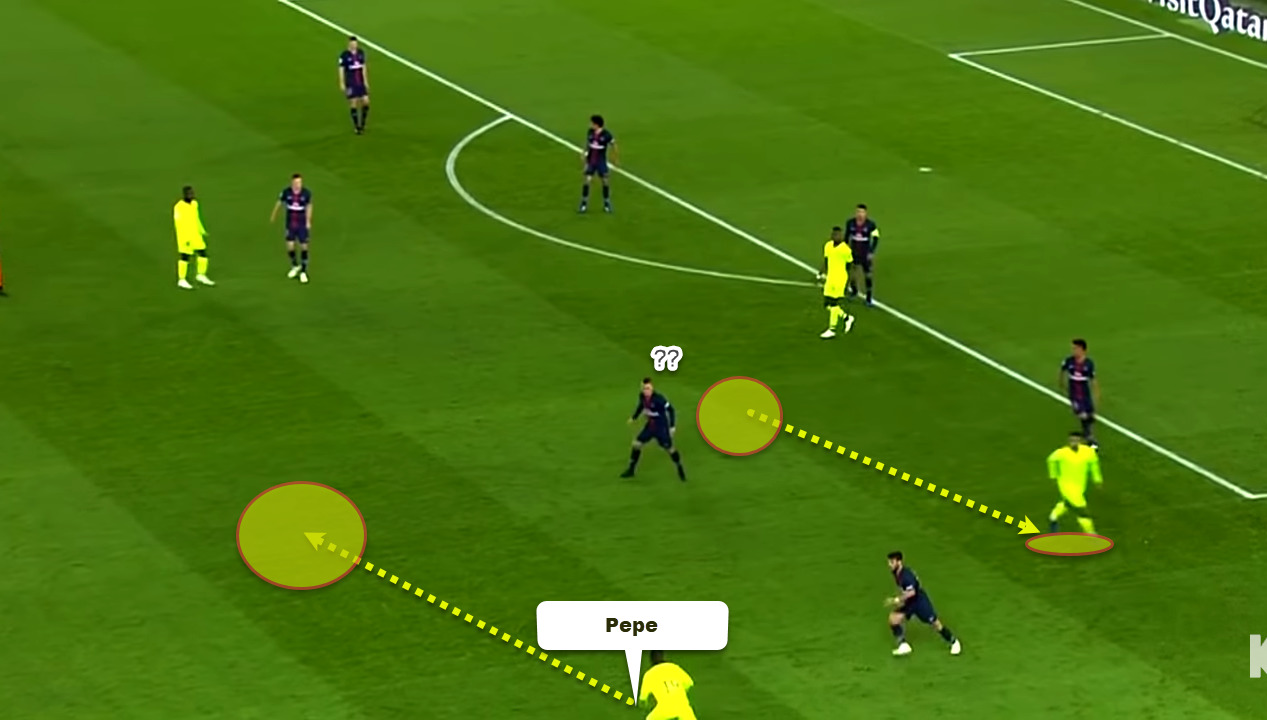 In certain matches, Pépé often drifts completely into the central corridor. Lille’s 5-1 victory over PSG was an example of one such match where Pépé played almost solely as a central presence. The picture below is an example from the same match. Notice how receiving in-between lines opens up the angles for him and that opens up more passing lanes for him. Another reason when he drifts centrally is when the opposition is holding a very high line.

Lille’s counter-attacking style needs Pépé’s pace and he’s very instrumental against sides that press up-field. Against such sides, Pépé moves centrally and tries to exploit the gap between the centre-backs. His midfielders try to find him via through-balls or balls over the top for him to chase onto. This is shown in the illustration below. The Lille midfielder plays him through on goal as the opposition are holding a very high line – almost near the half-way line. He times his run perfectly so as to beat the off-side trap and then uses his acceleration and close-control to score with apparent ease. 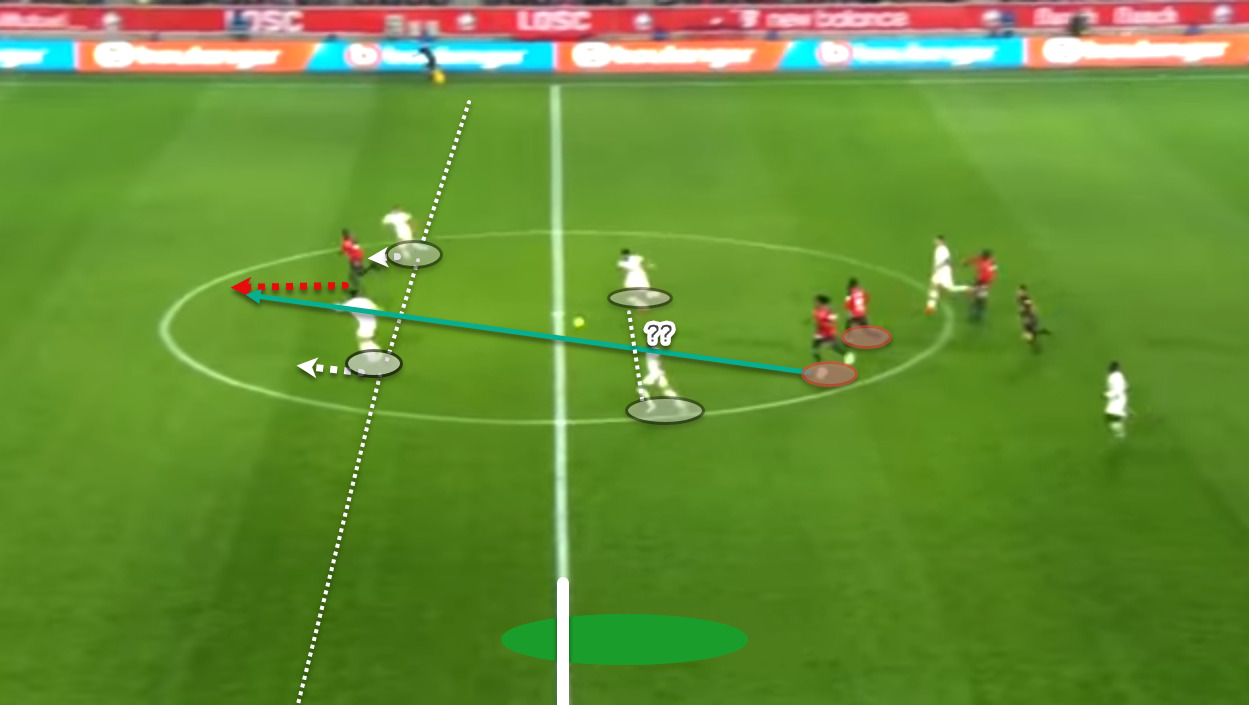 Pépé’s playmaking abilities are more clearly on display when he’s either drifting infield or already starting there, as discussed above. Apart from Pépé’s mercurial talents itself, Lille had certain automated tactics which helped Pépé.

We’ve seen how Pépé’s movements infield sparked counter-movements by his teammates to create space for him. However, one of the main sources of chance-creation for Lille last season was through-balls which incidentally, was also due to the same movements by Pépé. In other words, whenever the strikers would make runs the opponents had two options – either to follow Pépé or the forward making the run. This created a dilemma for the defending team and the speed at which Lille moved as well as their unpredictability in the final third became a major issue for the defending teams.

The above points have been explored in the picture above. The striker makes a curving run on the blindside of the centre-back and he’s found there by a well-weighted ball by Pépé. This was also the norm with Pépé’s national team as a near-identical situation follows and that leads to a goal for Ivory Coast.

From the central corridors, it is also easy for Pépé to switch the point of attack. Since he’s a left-footer, once he’s cutting inside, it’s easy for him to switch the ball in the same motion instead of having to stop the ball and readjust his body shape. This movement is expected by the opposite full-back and that allows him to make a run from the blind-side of the defender and hence gain an extra yard. This is seen in the following picture. Pépé switches the ball in a long whipped cross and the full-back is able to cross the ball first-time which results in a shot-on-target. 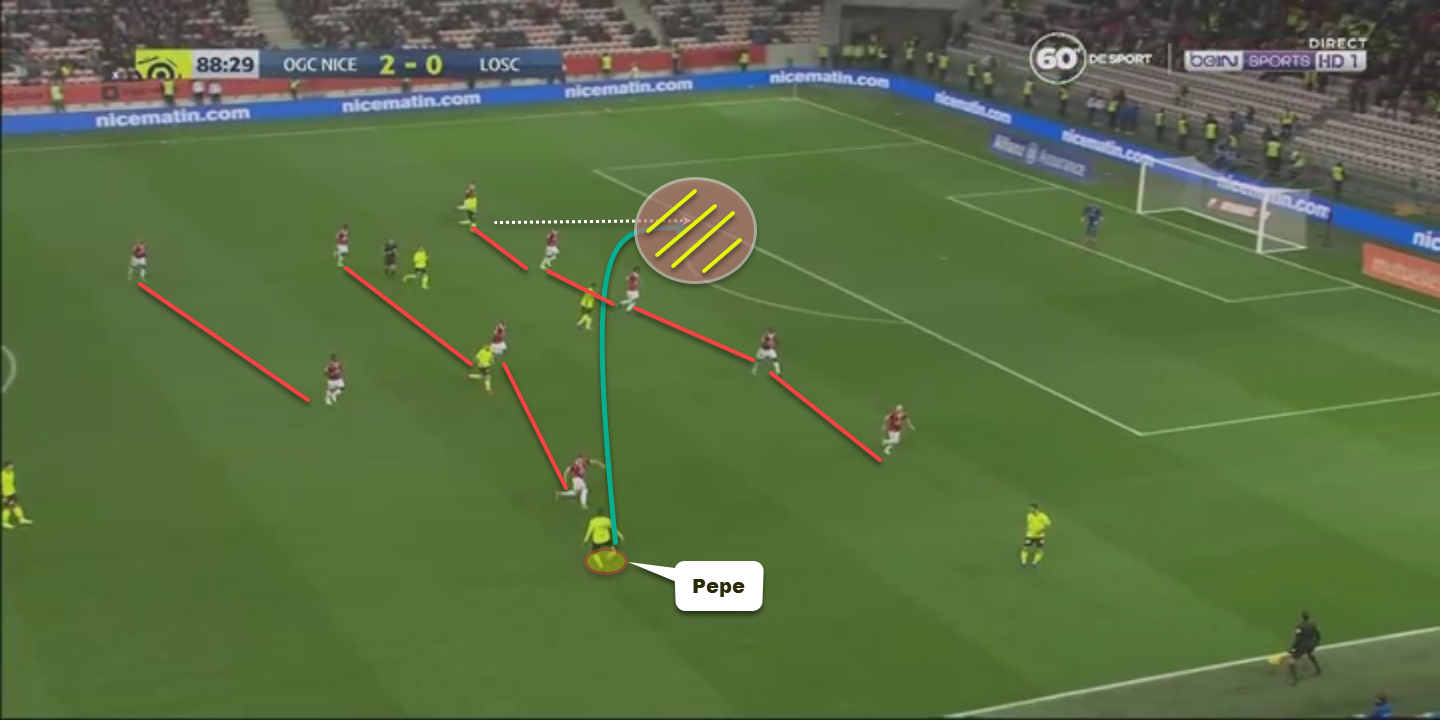 Pépé is one of the best wingers in Europe right now, simply due to all that he’s capable of. He can carry the ball, he’s a legitimate goal-threat and he can create chances as well. Arsenal truly needed someone of his profile since no one in their current squad is capable of completing 4.5 dribbles per 90.

However, it would be unwise to expect him to produce the same output from 2018/19. There are several reasons why. Firstly, the quality of teams in the Premier League is greater than that of Ligue 1. Secondly, teams don’t hold that high a line as in Ligue 1 and hence that will limit space for Pépé to run in behind. That’s also partly due to the reason that Arsenal dominate possession much more than Lille. Lastly, Pépé won’t be the only natural goal-scorer in the team with the likes of Aubameyang and Lacazette also in the team. He’ll not finish as much of his team’s possession as he used to at Lille where the team’s tactics were built around him.

Tactically, Pépé is a good fit for Arsenal as Emery likes his wingers to overload centrally so that the full-backs can provide width. His partnership with Héctor Bellerín will be interesting to watch. One issue of tactical non-compatibility might be his lack of defensive workload. Emery likes his wingers to help the full-backs and Pépé was given free rein from defensive workload at Lille. Emery also likes his side to press high up the pitch (Arsenal ranked third in the league for PPDA) while Lille hardly press in Ligue 1 – they were ranked 13th in the league by PPDA.

However, this is only nit-picking faults in a deal where there isn’t much to be disappointed with. Arsenal did very well to sign a player who’s on his way to becoming one of the top wingers in Europe and is just entering his prime. What will be interesting now will be finding out what formation Emery settles for now that he has a lot more options.