With a 4-0 victory over Scotland, Belgium almost guaranteed their participation at Euro 2020. Despite their good tactics and a promising start for Scotland, Belgium beat the home side with ease. We can say that the Manchester City star, Kevin De Bruyne filled the absence of star man and captain Eden Hazard, as he scored one and assisted the other three goals.

Belgium quickly grabbed the lead from a counter-attack and then added two more goals which technically ended the clash in the 32nd minute. This tactical analysis will look into the main patterns in this game. 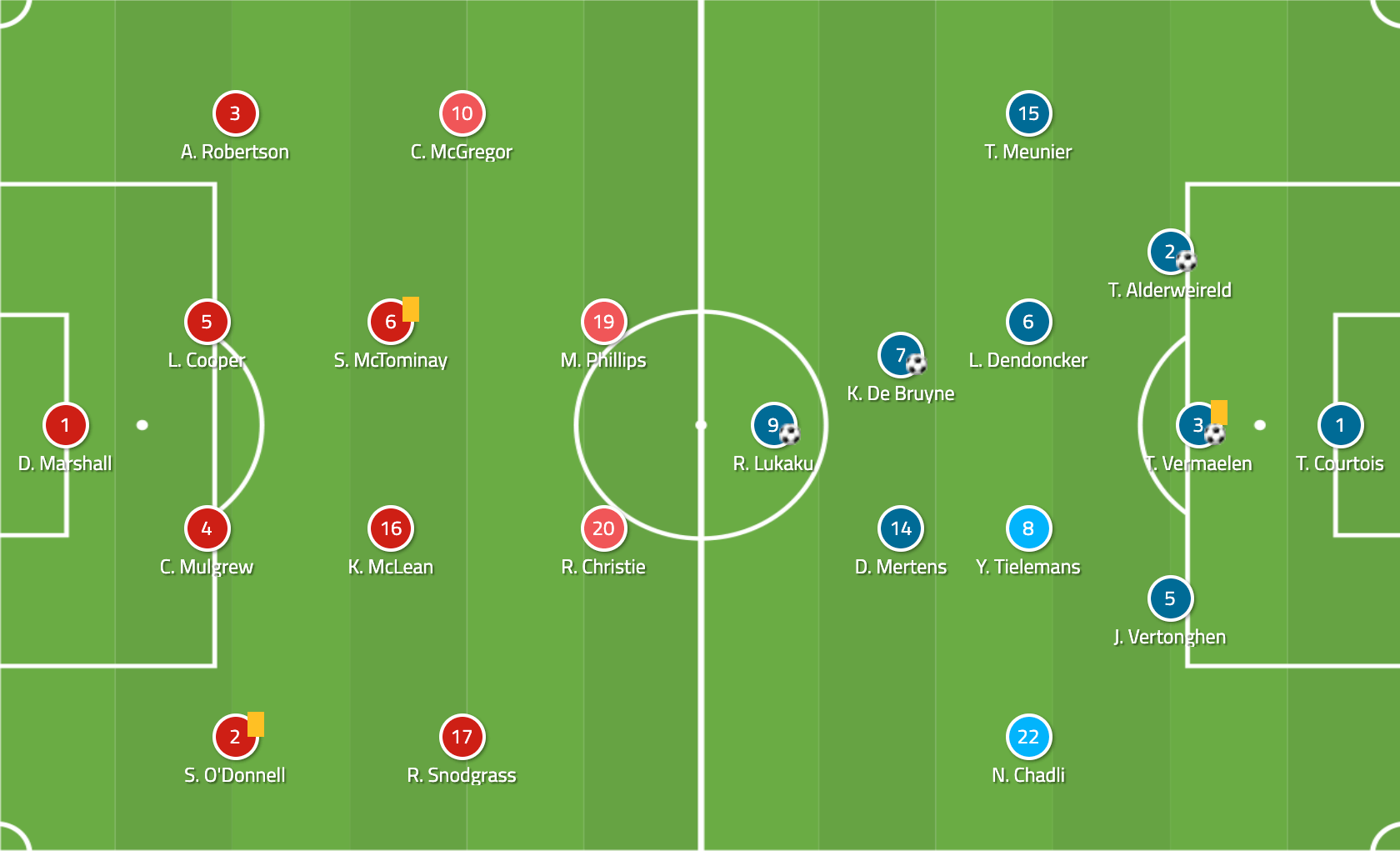 Scotland are in big trouble now as they are only fourth in group I, especially after the loss in the must-win game against Russia over the weekend. Steve Clarke opted for a 4-4-2 shape this time which is the second-most frequently used formation for Scotland.

On the other hand, Belgium are at the top of the group with a perfect performance so far. Roberto Martínez continued the 3-4-3/3-4-2-1 formation that he deployed for the World Cup last year. He chose this structure to eliminate the issue of the lack of a proper left-back and instead used three central defenders and wing-backs. This time Thomas Meunier and Nacer Chadli had the opportunity to support the attacks and the defensive phase from the wing-back position.

Martinez lined up his best possible starting XI, and despite some injuries, the squad was still really strong and had numerous key players like Jan Vertonghen, De Bruyne and Romelu Lukaku, supported by a young talent like Youri Tielemans.

Scotland without the ball

One of the major components of the tactical side of this match was the Scottish team behaviour when out of possession. Scotland set up in a 4-2-2-2-ish shape in a medium block and pressed with intensity in the opening minutes which gave them domination in possession in the early stages of the game. The goal was to force Belgium to the wings and trap them there. Here, in the images below, you may see how they tried to prevent the opponent from progressing.

Matthew Philips tried to press with a curved run to approach Thomas Vermaelen from the outside angle thus restricting the opponent to that wing. Meanwhile, Celtic player Ryan Christie was pressing the ball carrier and the midfielders marked the available options there.

With tactics in a central oriented manner, they could successfully force the opponent wide where they could stop attacks. As you may see below, Philips is forcing the ball to the wing while the second line shifts there to protect the space. Scotland used zonal-based defence, but situational man-marking which meant that when the opponent was in their zone, they got covered by the Scotland players. Therefore, Leander Dendoncker was not a viable option for Toby Alderweireld and also, due to Callum McGregor’s close positioning, Scotland could maintain access to the wing-back, namely, Meunier.

Besides the defending aspect of the pressing, Scotland used it for attacking purposes too. They often tried to attack quickly after a ball recovery or used long balls as a progression tactic to the final third, which can be seen below. Scotland usually targeted the wide areas in order to take advantage of the space behind the Belgian wing-backs.

As a consequence of the opposition’s central domination, the Belgium side was restricted to the flanks. So when Belgium attempted to build up, they always had to use the wide areas to progress up the pitch. The instance below highlights how Scotland denied Belgium central options. The two strikers stayed close to each other and dropped back deep to use cover shadow in order to block pass routes to Tielemans and Dendoncker.

Scotland had numerous reasons to do this. Forcing the opponent next to the touchline gave them much lesser space but more importantly, they could prevent passes towards Belgium’s attacking three of Dries Mertens, Lukaku and De Bruyne. Here again, due to Scotland’s narrow defence in a 4-4-2 shape, Belgium’s only option was to pass wide.

This is evident in the statistics as can be seen below; the Belgian attacks were extremely concentrated on the wings –

As the game wore on, Belgium seemed to have found a solution for the above-mentioned issues. Therefore, after the opening minutes, Belgium tried to overload the wings to find a breakthrough. In the instance below, five Belgian players occupied in the right flank to create a pass combination. Due to the short distance between each other, they could play with quick short passes.

For example, in here, Belgium used a third man wall pass – Alderweireld could not pass to Dendoncker due to Christie who moved out to press the ball carrier, thus blocking the pass route. However, they could outplay this with a pass to Meunier because now Dendoncker was accessible for the Belgian side. So Meunier quickly played the ball toward Dendoncker.

Although Belgium could not break down the defence in the ball side, with this tactical weapon, they could drag the opposition shape towards that area, therefore, when Belgium switched to the far side they could utilise the space there.

In the image below, we could see how Belgium found a way to exploit the space toward the centre utilising the momentum of shifting. Robert Snodgrass shifted to the ball zone to close down Chadli and thus cover the diagonal pass route toward the centre. However, it allowed Chadli to pass to the open man, Tielemans, in the half-space.

Also, this image shows us Belgium’s 3-4-3 shape in possession. Wing-backs are wide which allowed the wingers to come narrow. Therefore, Mertens and De Bruyne usually stayed in the half-spaces which pinned back the opposition full-backs and forced them to stay narrow.

In this part of the game, Scotland’s defence was less organised due to Belgium’s positional switching and the space that the defence thus had to cover. Belgium could put the home side’s defence under pressure which ended with the second goal after a corner situation.

Despite Scotland having a relatively high possession rate with 48%, they could not put Belgium’s goal under a real threat. They only produced 0.44 xG (expected goals), thus the last step in this analysis is to look into the guests’ defensive phase to reveal how they managed to protect their goal.
As you see, Martínez asked his team to form a 5-3-2/5-2-3 shape out of possession. Mertens often dropped into the midfield and De Bruyne stayed up front, next to Lukaku. Moreover, due to Scotland’s wingers, Chadli and Meunier were often pinned back to the last line, therefore, the task of covering the midfield fell to Dendoncker and Tielemans. They had to from shift side to side in order to close down the wing but the proximity between Lukaku and De Bruyne could provide enough central protection.

In the example above, Liverpool left-back, Andrew Robertson did not have a viable pass option thus he had to pass back to the centre-back.

As this analysis showed, Scotland’s tactic was effective in terms of reducing the Belgians’ attacking threat, limiting their build-up to the wide zones, which is why Belgium initially struggled to break down the opponent’s defence. Moreover, their own attacks were promising, especially the quick attacks after a ball recovery.

Having said that, Belgium were still able to create chances, and more importantly, score goals due to the quality of their players. The first goal proved their highly effective and impressive counter-attacking skills whilst the other two scored in the first half were from corners. The second goal occurred after a corner from a good cross and clever positioning and the third one came from a header at the corner.

Overall, Belgium displayed a strong performance and with the additional three points, they still lead Group I. On the other hand, Scotland’s chances of qualifying for Euro 2020 are still alive, but difficult to achieve.