Waasland-Beveren hosted Royal Antwerp in the final game before Christmas in the Belgian Pro League. Both sides needed the points for different reasons, with the hosts looking to try and pull clear of the relegation dogfight that has begun to emerge over the past couple of weeks. Antwerp, on the other hand, were looking to get their season back on track after a run of disappointing results. In the end, it was the away side who emerged victorious, winning 3-0. 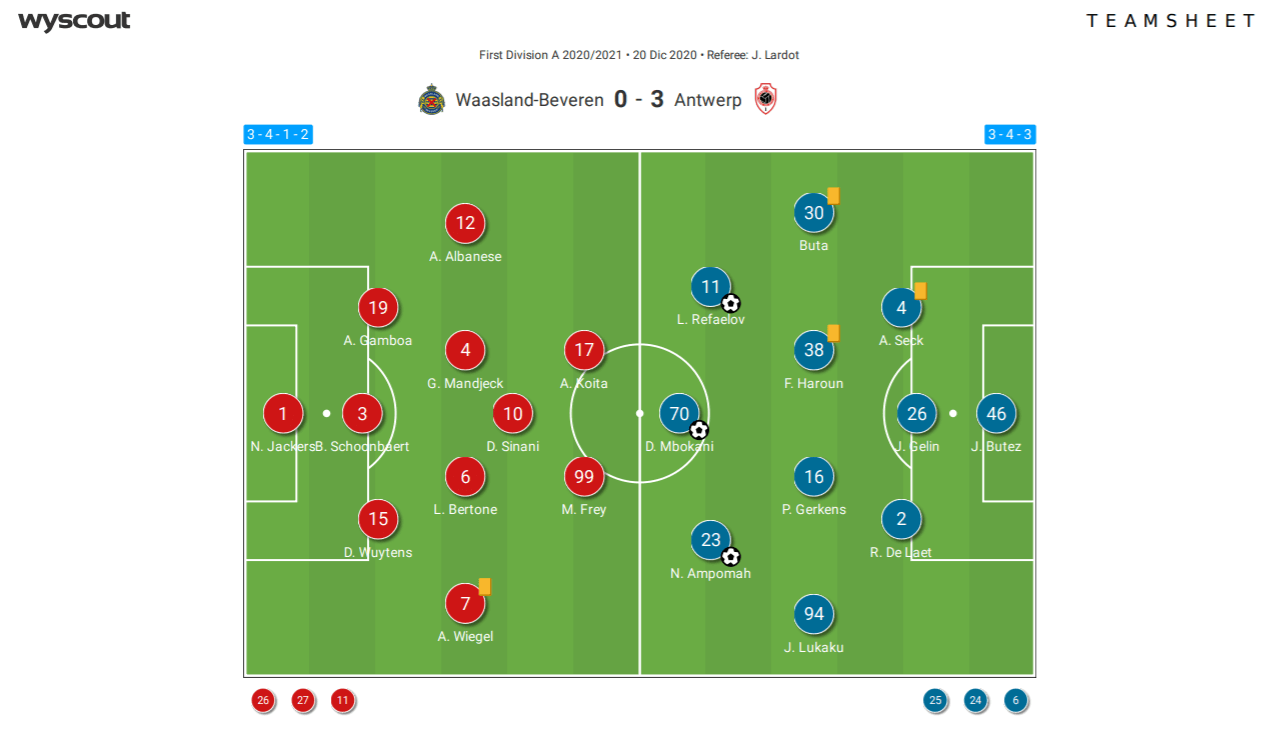 Beveren coach Nicky Hayen went with a 3-4-1-2 formation, with number one Nordin Jackers continuing in goal. The back three was made up of Alexis Gamboa, Brendan Schoonbaert and Dries Wuytens. Alessandro Albanese and Andreas Weigel were there to provide width, while Georges Mandjeck and Leonardo Bertone were the central midfield partnership. Danel Sinani was playing just behind Aboubakary Koita and Michel Frey.

As we see from the image below, Antwerp have just lost the ball, and it has returned to Jackers. Instead of retreating and looking to create a defensive block that is hard to break down, the Antwerp players immediately organise into a formation whereby the front three are occupying the home side’s defenders, denying Jackers a pass out from the back. Mbokani, Refaelov and Ampomah have been circled to indicate this. 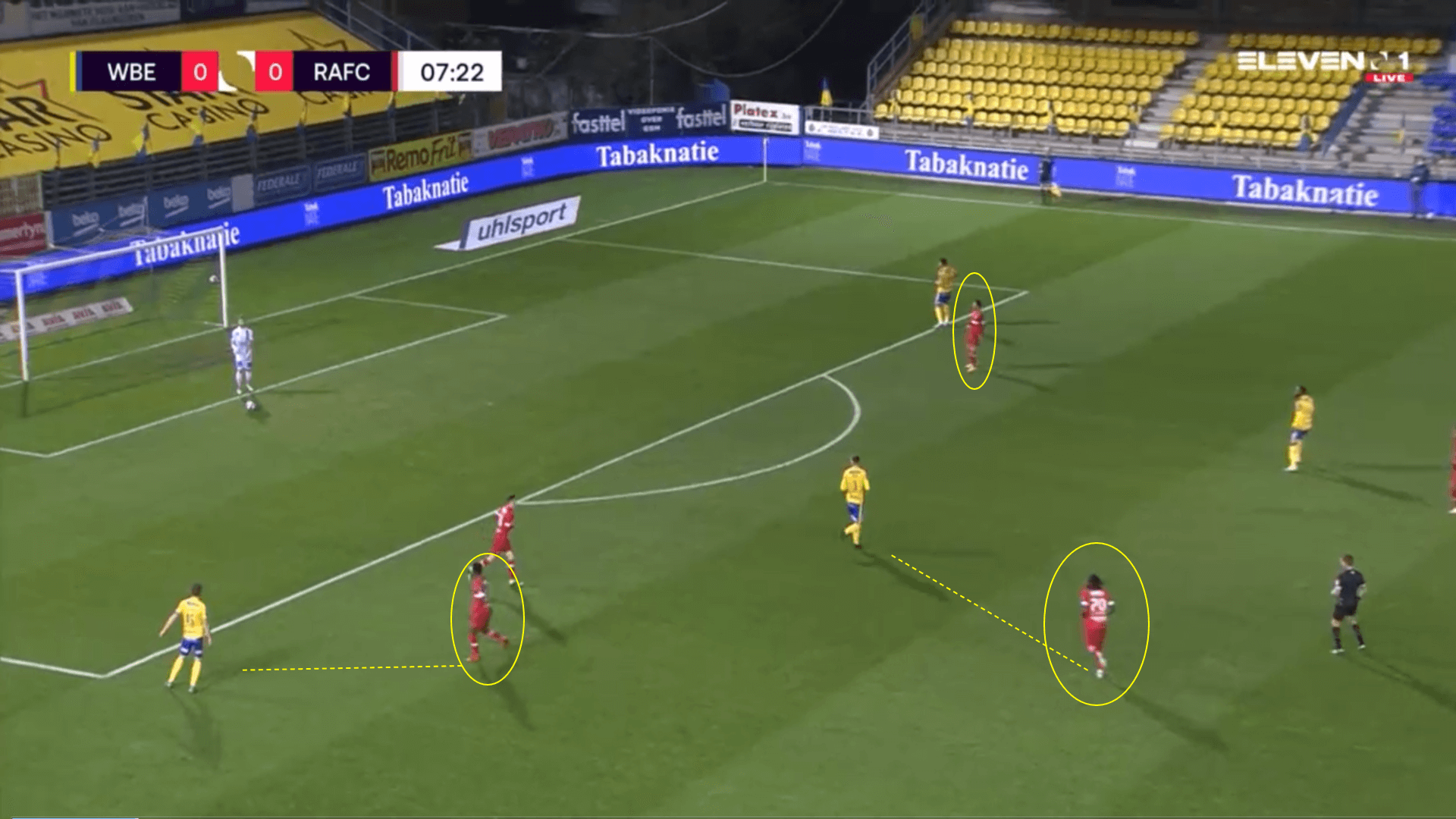 This tactic is successful in this instance, as Jackers has to go long to Frey. His pass is wayward and ends up going out for a throw-in to Antwerp. Frey won only two of his five aerial duels during the match, whereas Antwerp defender Seck won all five of his aerial duels, which included a couple against Frey.

It was this press which led to the third Antwerp goal, with Ampomah and Mbokani being the main pressers. As we see below, both have pushed up high while Beveren are playing the ball around at the back. This puts pressure on the back three of the home side, who, in hindsight, should have just cleared it long rather than overplaying it. 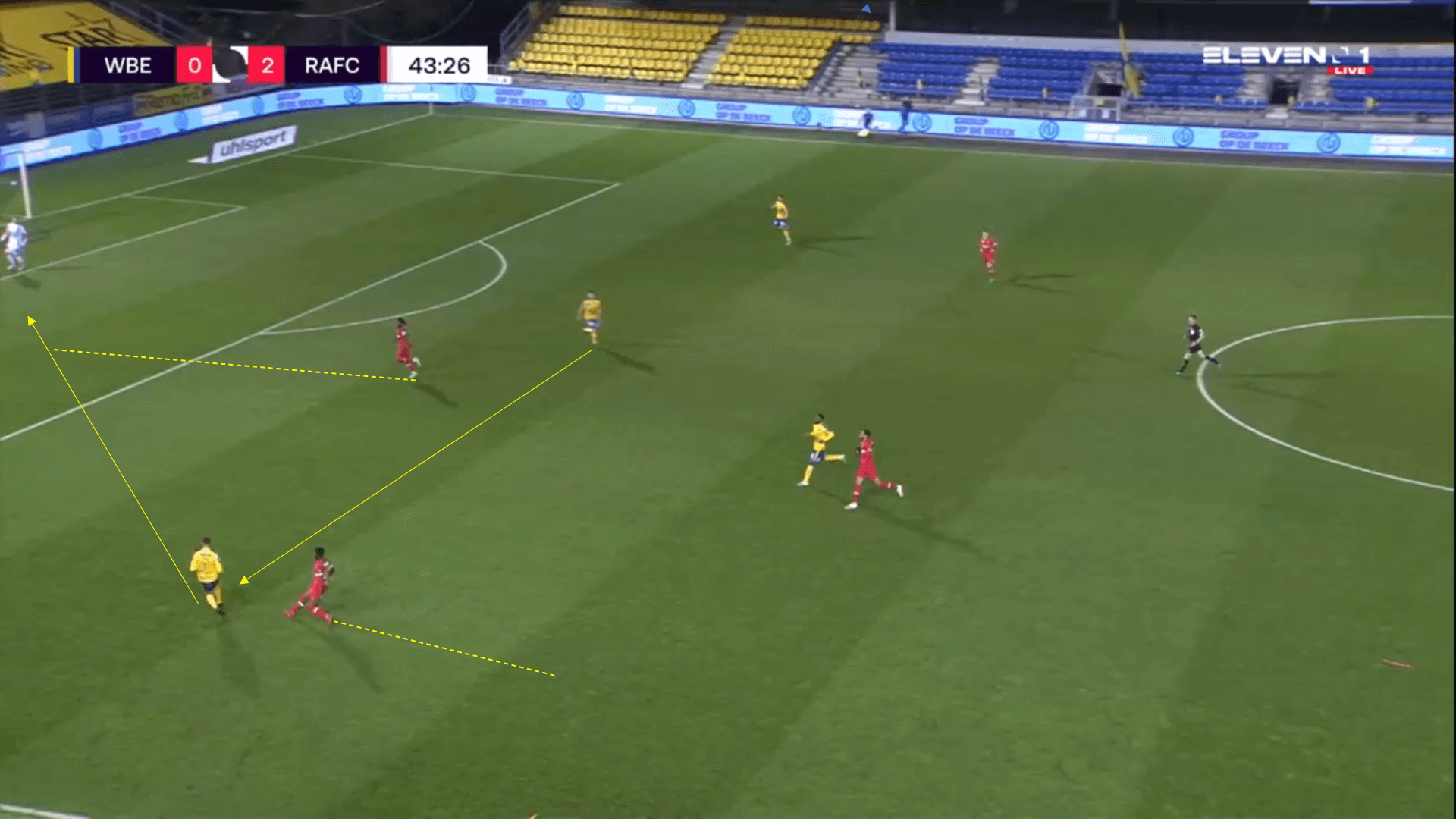 In the end, they look to go back to goalkeeper Jackers, and under-hit the pass, allowing an already pressing Mbokani to pounce and find the net. Leko will no doubt be delighted that the pressing game he put into practice resulted in a goal, as well as having turnovers of possession throughout the match. 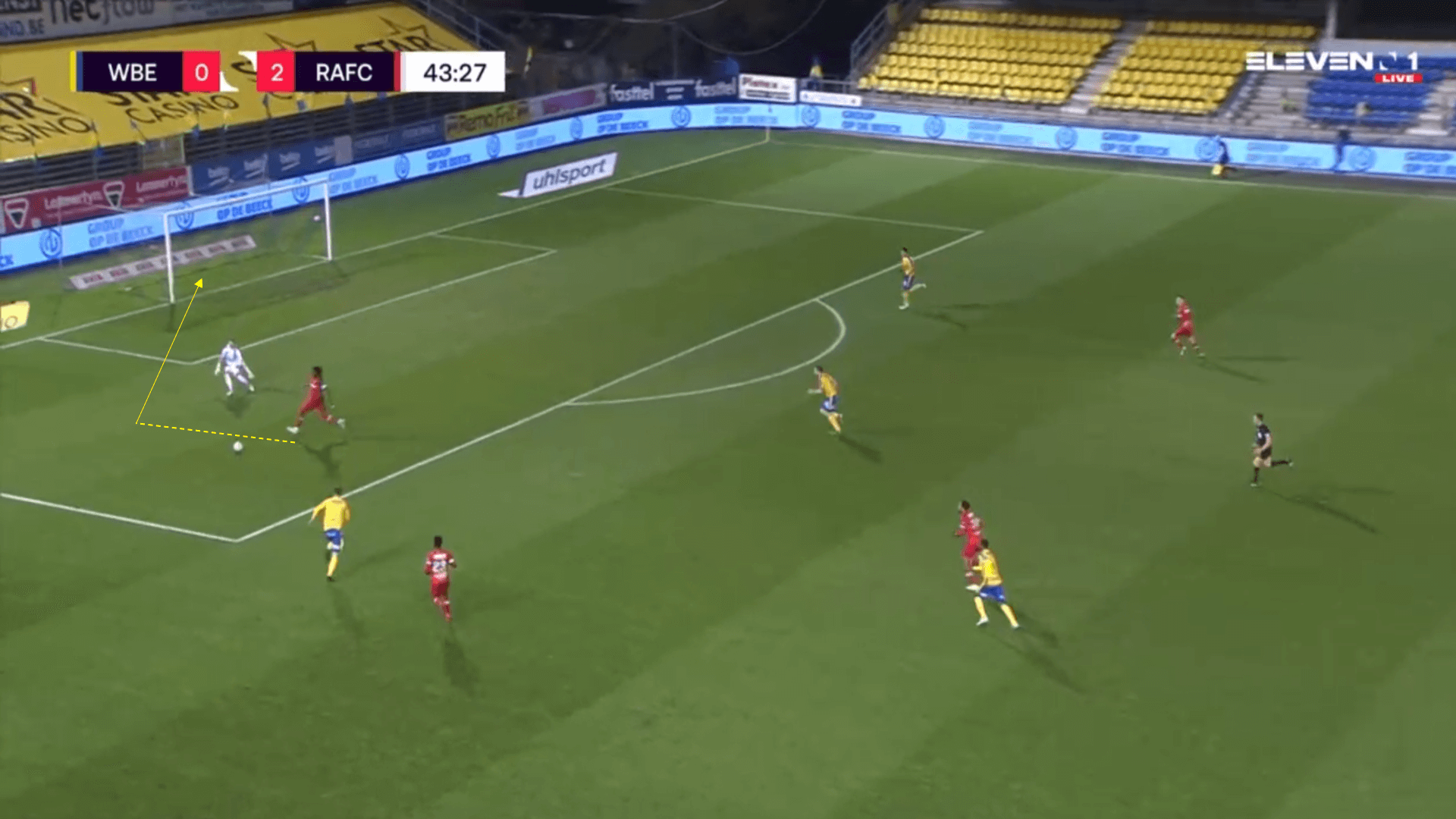 Antwerp’s second goal was a fantastic team move, yet it wouldn’t have been possible without the play of Mbokani. Throughout the first half, Antwerp used him to release pressure. The experienced striker would drop deep when Antwerp were defending to be the outlet pass, able to hold the ball up, before shifting it to either Ampomah or Refaelov. This was crucial in the transition game for Antwerp. More often than not, the striker was able to make the pass or would be fouled.

Antwerp are able to win the ball back, and, as we see below, Mbokani has dropped in to pick the ball up. Beveren defenders outnumber him and Refaelov, and the striker realises this, holding on to the ball long enough for other Antwerp players to break forward. 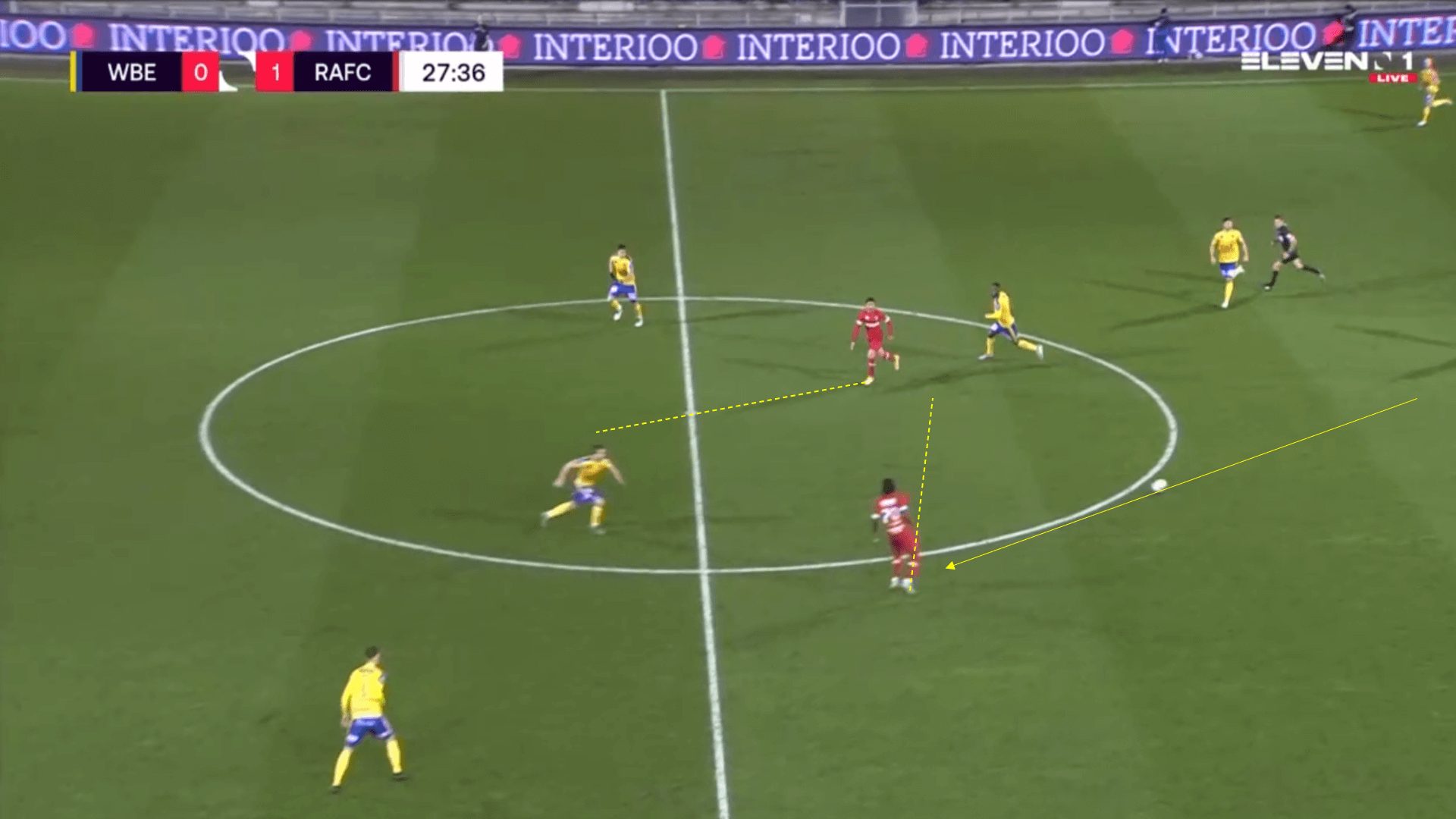 As the play progresses, we see that Mbokani now appears as the furthest forward player, again helping the side progress up the pitch. Twice in this move, he has been the reason for Antwerp being able to get deeper into Beveren’s half and build the play. 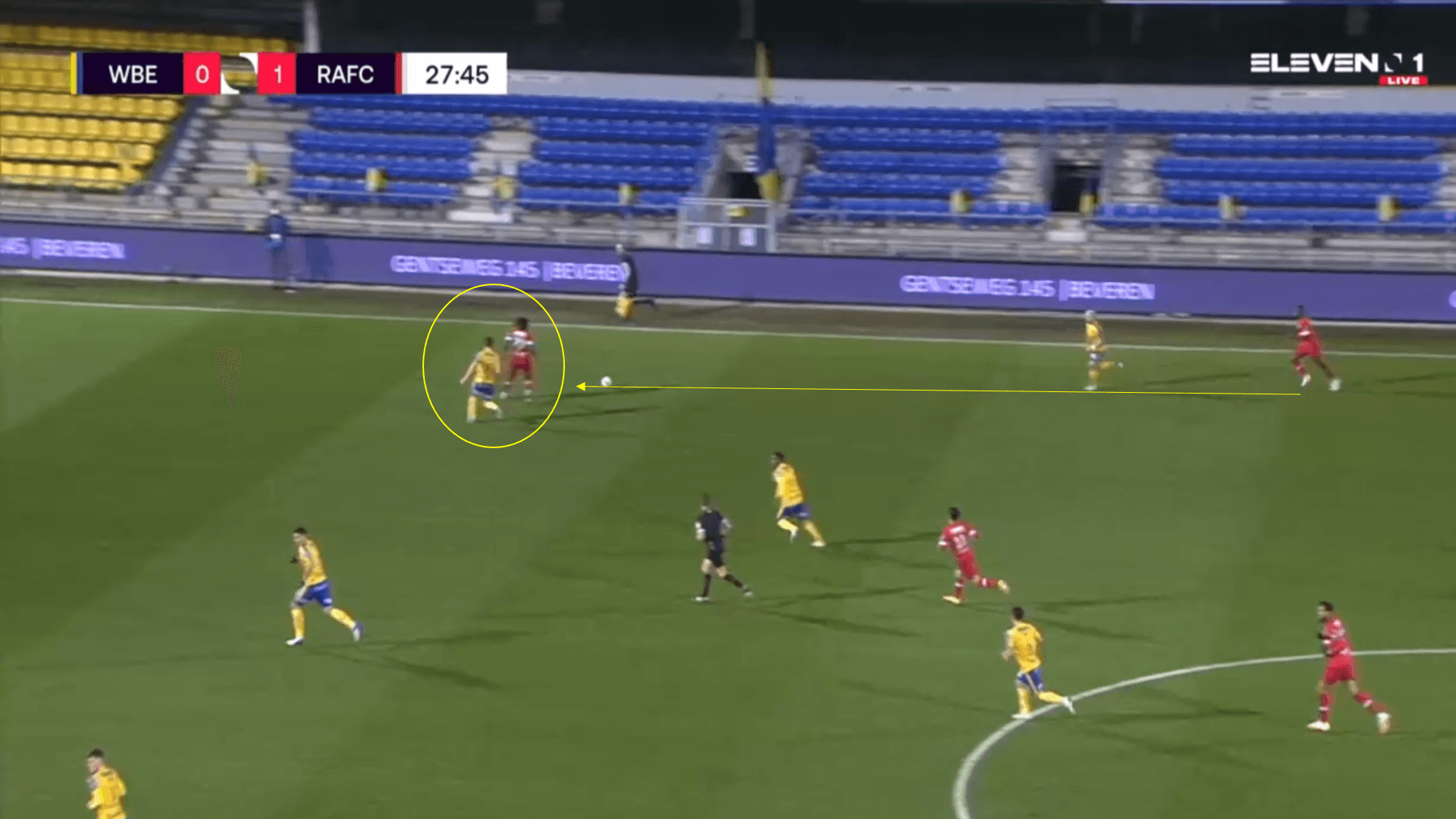 Mbokani is able to drag two defenders to him before he shifts the ball, creating space for the rest of the team. Eventually, it is Haroun who pushes forward on the right-hand side and is able to cross to Ampomah to finish off the move. We see Mbokani deeper at the end of the play, which has allowed for space further forward because of his role as the main striker. With runners off of him, Antwerp are able to create chances like the one analysed. 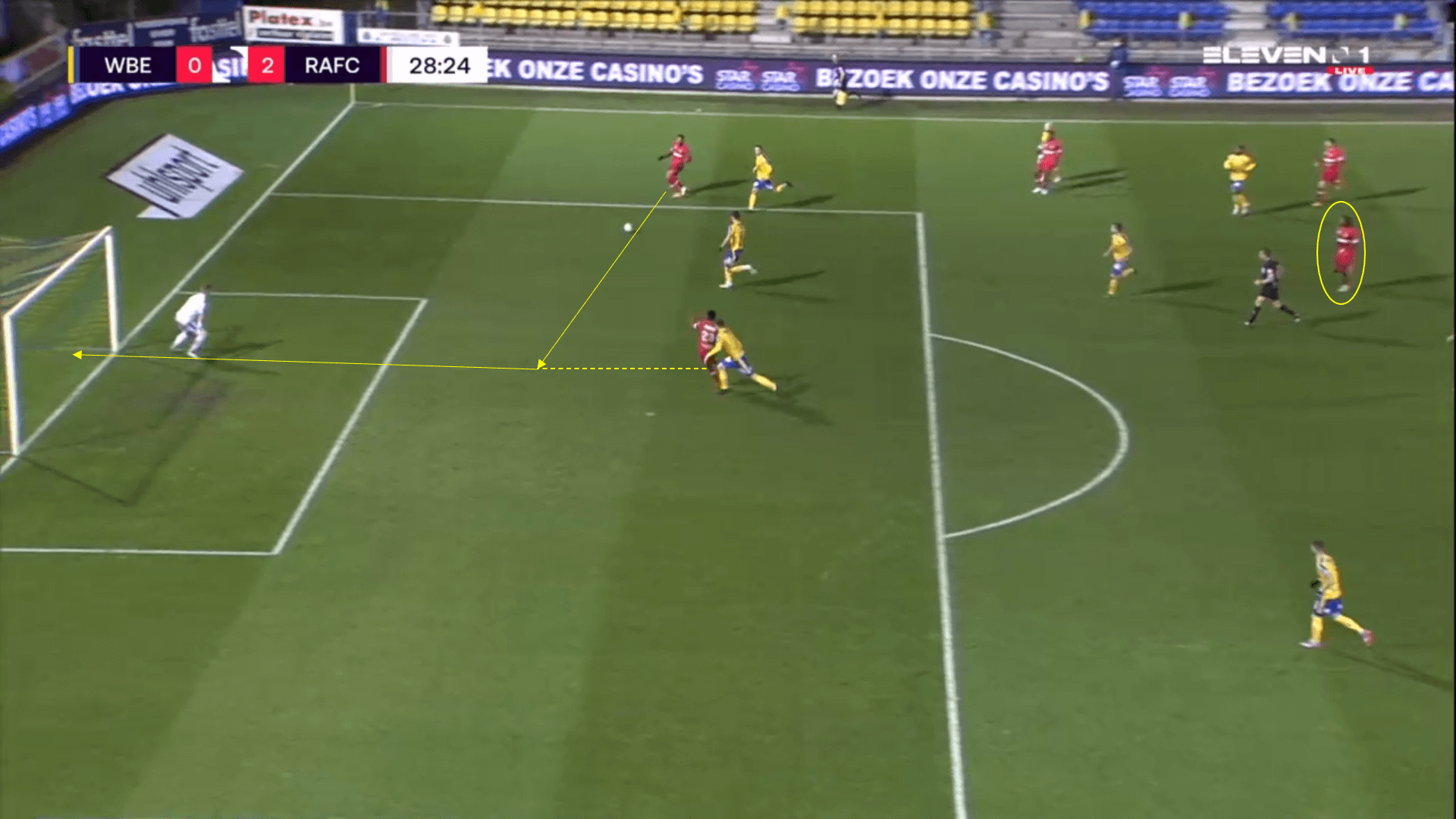 Mbokani was pivotal throughout the move that led to the second goal for the away side. His hold-up play and willingness to run meant they were able to transition from defence to attack, building a play that involved the majority of the midfield and front three.

Antwerp’s back three were able to keep Beveren from creating clear cut chances in order to get back into the game. When we look at the data for the back three, we can see that they were on point defensively throughout the 90 minutes.

The previously mentioned Seck was arguably their best player, winning 11 duels in the match, according to Fotmob. This included 50% of his attempted tackles, which is impressive when we consider he was up against one of the stronger dribblers in the league in Koita. Below, we see him in a one-on-one situation with an attacker, with plenty of space either side of him for the Beveren player to run into. Seck’s body position is showing the player down the line; however, when the player instead decides to come inside, he is able to quickly change position and win the ball. This was a constant feature of the defenders’ play. 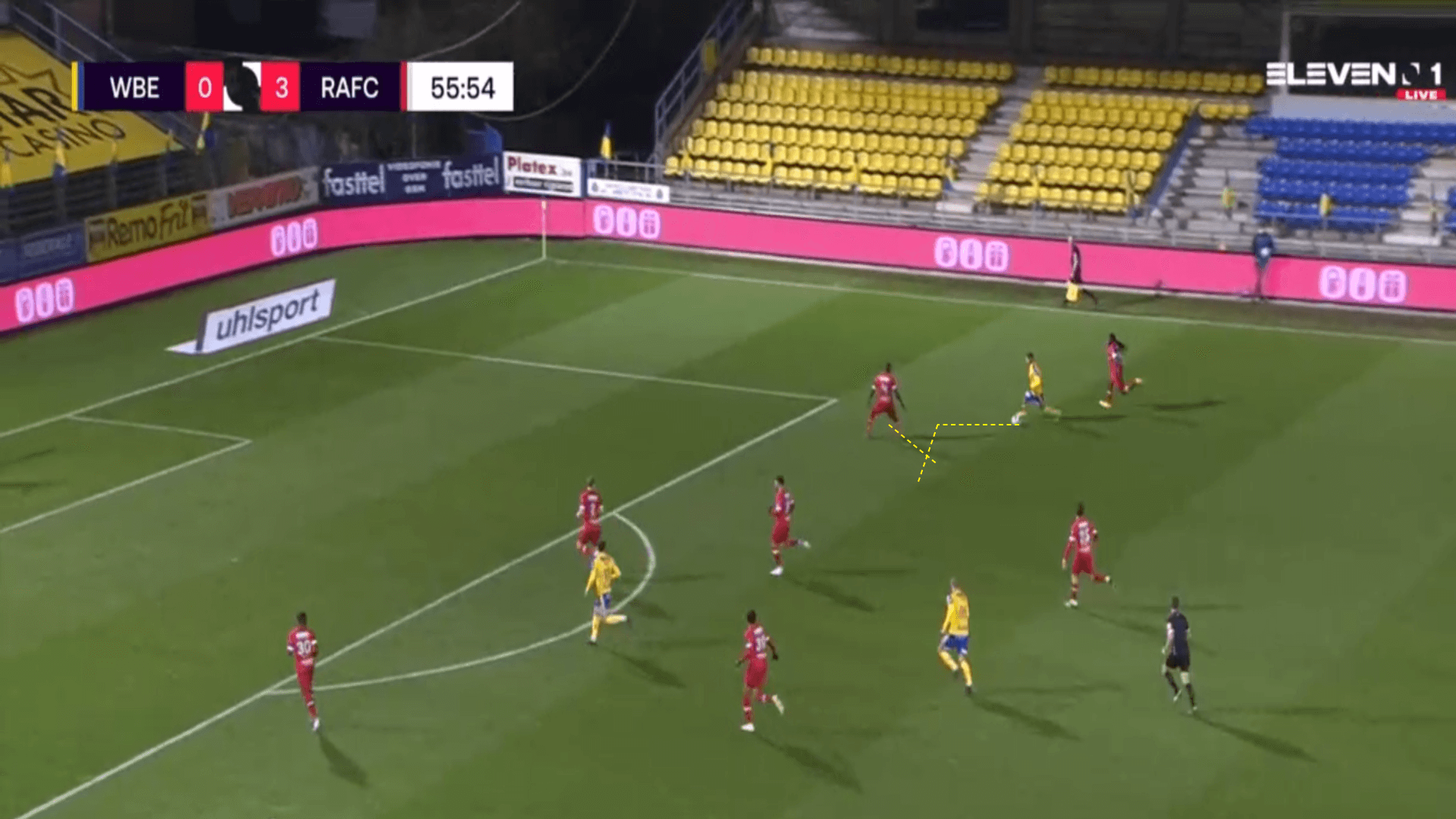 Gelin’s data was not as impressive as Seck’s, but still noteworthy. While he only won two duels and lost three, he managed to complete five recoveries, suggesting that, even with the duels he lost, he managed to recover from them. Furthermore, he also managed an 89% passing success rate on 63 passes, meaning that, when he recovered the ball, he was able to accurately get it into the midfield or up to Mbokani.

De Laet, the final of the three, managed to win nine duels and only lose three. He also managed six recoveries and four interceptions, which both helped stop Beveren from building any attacks.

What makes the data and the clean sheet even more impressive is when we consider how the wide men are asked to get up and down the pitch by Leko. Both Buta and Lukaku are there to provide the width for the side. This means that, when both are pushing forward, the side are open to counter-attacks. The back three were able to cover the spaces in wide areas, meaning Beveren were not able to exploit them and create dangerous chances.

Beveren’s recent revival has taken a hit, with two consecutive 3-0 defeats, albeit against sides they would expect to lose to. Antwerp, on the other hand, looked like they have gotten over their recent slump in form. Leko will be delighted that the pressing game created a goal, while the importance of Mbokani was once again highlighted in this game. Finally, their back three all played well in order to keep the hosts at bay.