Arsenal came away with a big 4-0 victory and headed into the break in good form. This tactical analysis will look at the tactics and details that contributed to their victory. 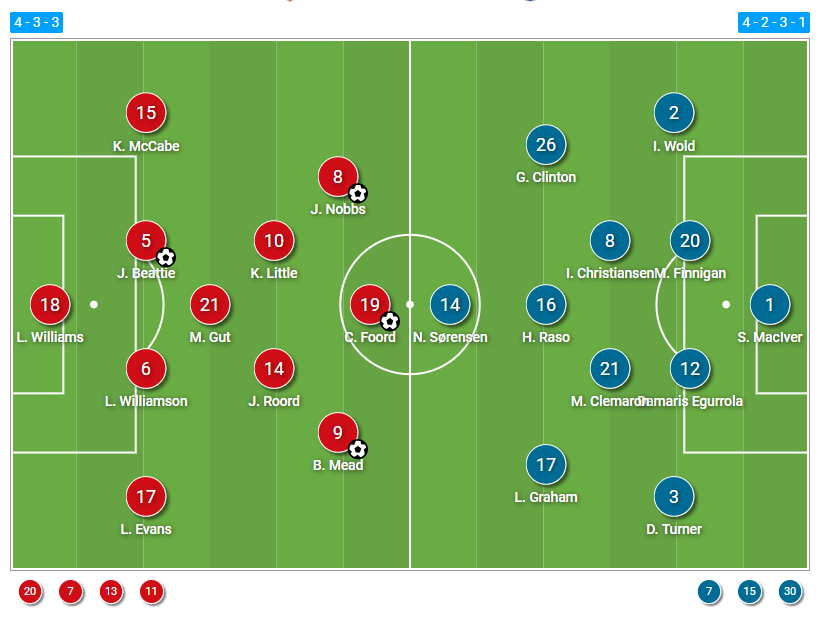 The biggest shock of the day was seeing Vivianne Miedema on the bench with Caitlin Foord given a rare start as the central striker. This was more as a precaution to a hip injury she sustained during the recent international break. Lydia Williams continued to keep her place in goal with Lisa Evans and Jordan Nobbs the other two changes.

Everton made one change with Hayley Raso returning to the team in place of Simone Magill playing in a 4-4-2 diamond formation to try and counteract Arsenal’s 4-3-3.

From the get-go, Arsenal Women’s game plan was clear. To expose the space in behind Everton’s high flying full-backs. Their 4-3-3 included two inverted wingers in Nobbs and Beth Mead with the full-backs giving width for Arsenal. Upon analysis, the strategy was for the wingers to move into the half-space with the full-backs overlapping creating space between Everton’s defenders. When the long pass came down the flank, the wide player would play it into the interior player allowing the wide player to make an overlapping run. Both Evans and Katie McCabe are naturally attacking full-backs making use of the spaces in behind Everton’s two full-backs.

This pass map shows Arsenal’s most frequent forward pass combinations. The thicker lines indicate the higher number of passes made between players with the top three combinations belonging to players involved in the wide areas. Passes from McCabe to Nobbs and Leah Williamson to Mead are most frequent with 12 and 11 passes each in 90 minutes.

Due to the nature of the 4-4-2 diamond formation, the full-backs become the main source of width, which propelled them push forwards regularly to support attacks. Though they were set up in a diamond formation on paper, Everton played with a faux back three to try and win the midfield battle by pushing one full-back higher up in midfield out of possession. We’ll come back to this point, but it’s first important to understand Arsenal’s build-up to see how they were able to get the ball into the wide areas. 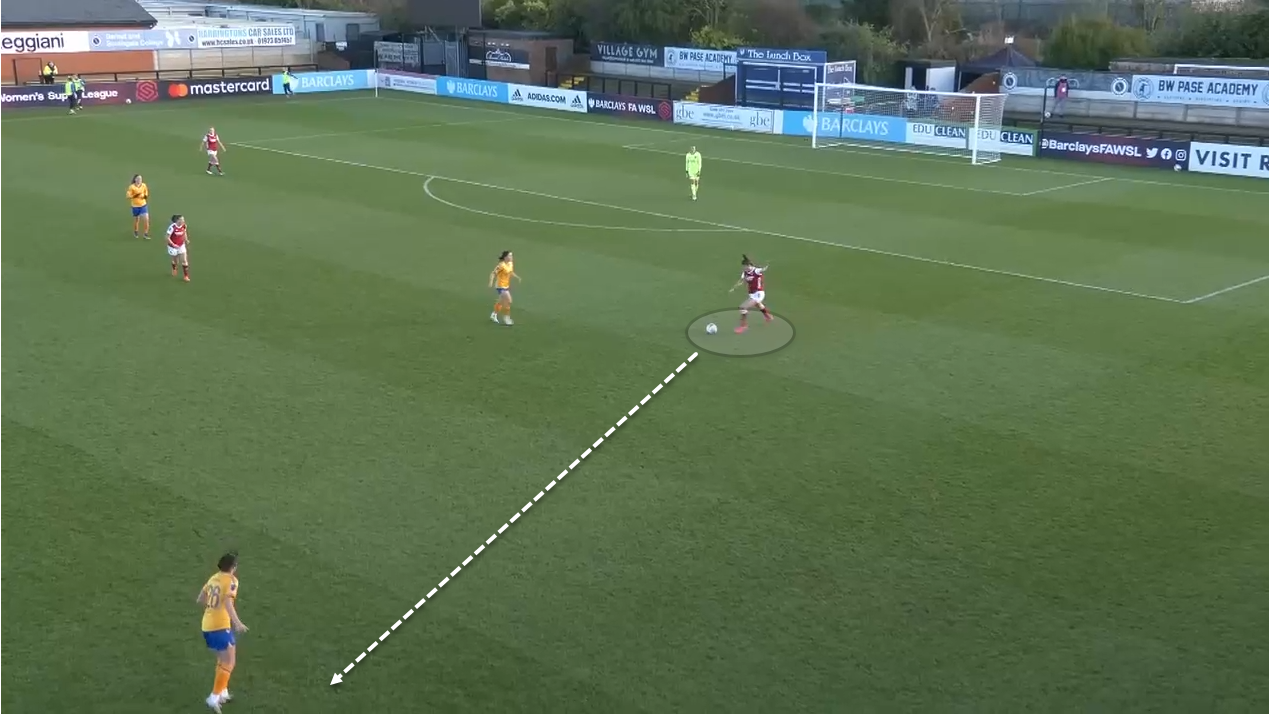 Arsenal had two methods of build-up which changed as the game progressed. At first, they used Malin Gut as the deep-lying playmaker but was eventually blocked due to Everton’s diamond system crowding her out. Arsenal then quickly adapted to play the ball out from the goalkeeper to one of the centre-backs who would then play the ball into the full-backs.

The example above shows Jen Beattie passing into McCabe who played a long pass down the flank. This was a constant method to get the ball out into the wide areas which exposed any space the Everton full-backs left in behind. The Everton full-backs would push up and because of the quick turnover in possession, Arsenal were more often than not able to exploit the spaces in behind. Using the pace of McCabe, Mead, and Evans gave Arsenal several outlets from either flank. Their second came from a move down the wide area as is seen in the below example where Williamson plays a pass over the top for Jill Roord to run onto and cross in for Foord. 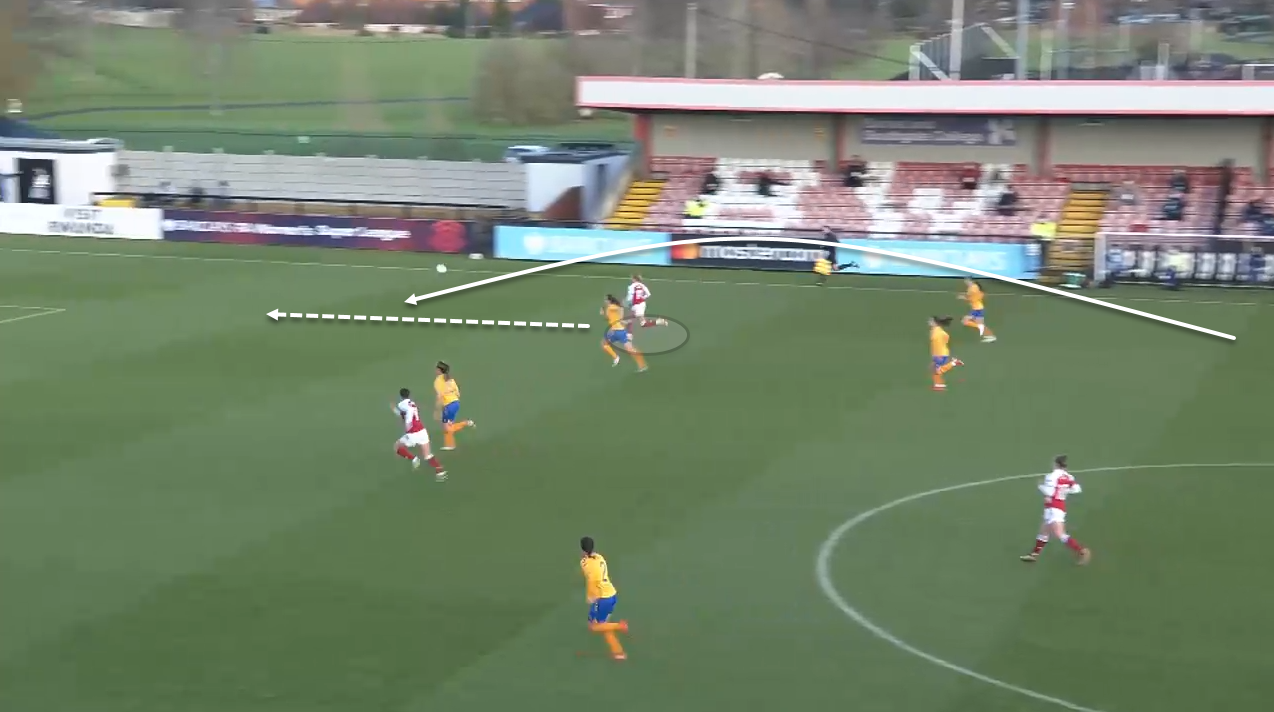 While Arsenal had numerous opportunities from these areas, it wasn’t without any reply from Everton. They were too slow and disjointed in the first half and increased the tempo which contributed to their improved performance. Both Everton strikers were tasked with applying pressure on Jen Beattie and Williamson which made it much more difficult to play these direct passes. Everton’s off the ball strategy was to defend high with at least 3-4 players to try and cut the passing lanes and counter-attack high. However, the first half seemed disjointed with Raso and Nicoline Sorensen isolated from their midfield pressing on their own at times as is seen below. 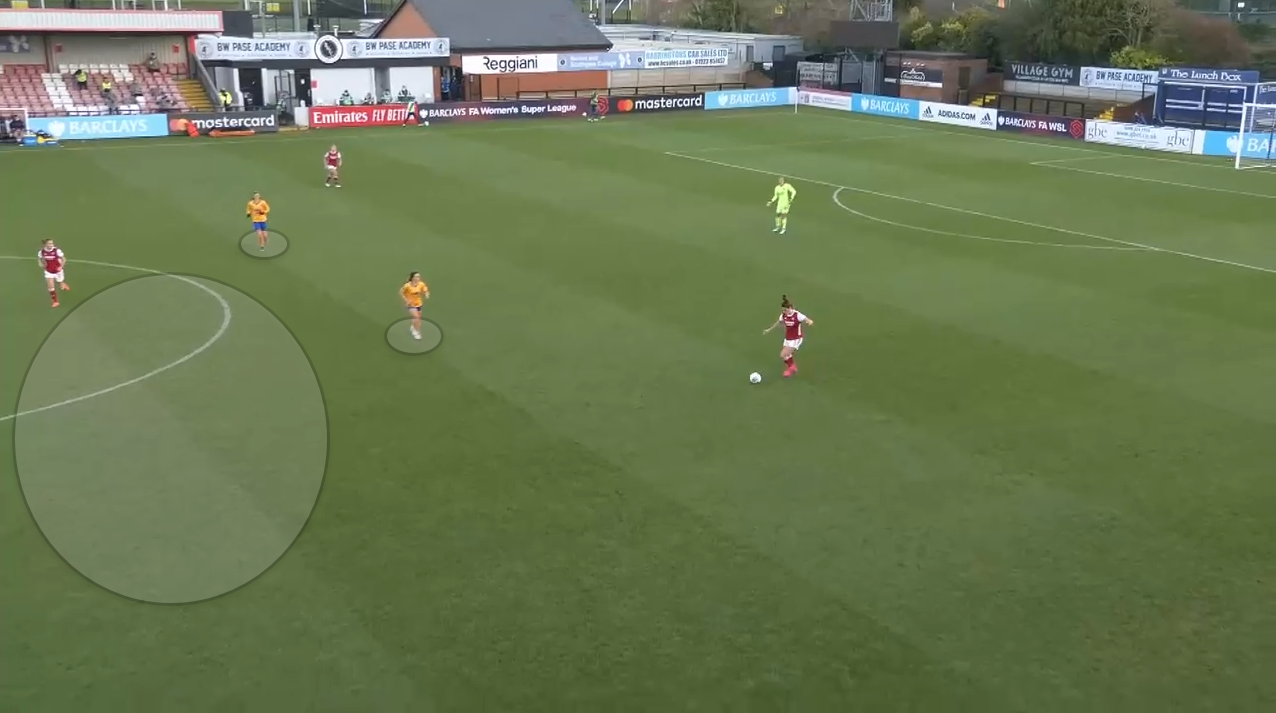 Both strikers have no support from midfield and this was one of the main reasons for Arsenal’s easier use of the wide spaces. By being given an easier time in build-up, the Gunners were able to keep possession and play it where they wanted without being pressed too hard. Though Everton’s tactics seemed sensible there was an issue in execution.

The second half saw a change with more pace, momentum, and cohesion between Everton’s midfield and defence. The players seemed to utilise the effectiveness of the 4-4-2 diamond system by using their numerical advantage in midfield to their benefit. Izzy Christensen, Maeva Clemaron, and Lucy Graham combined to isolate and press Arsenal much higher up the pitch closing them down in pockets of space. 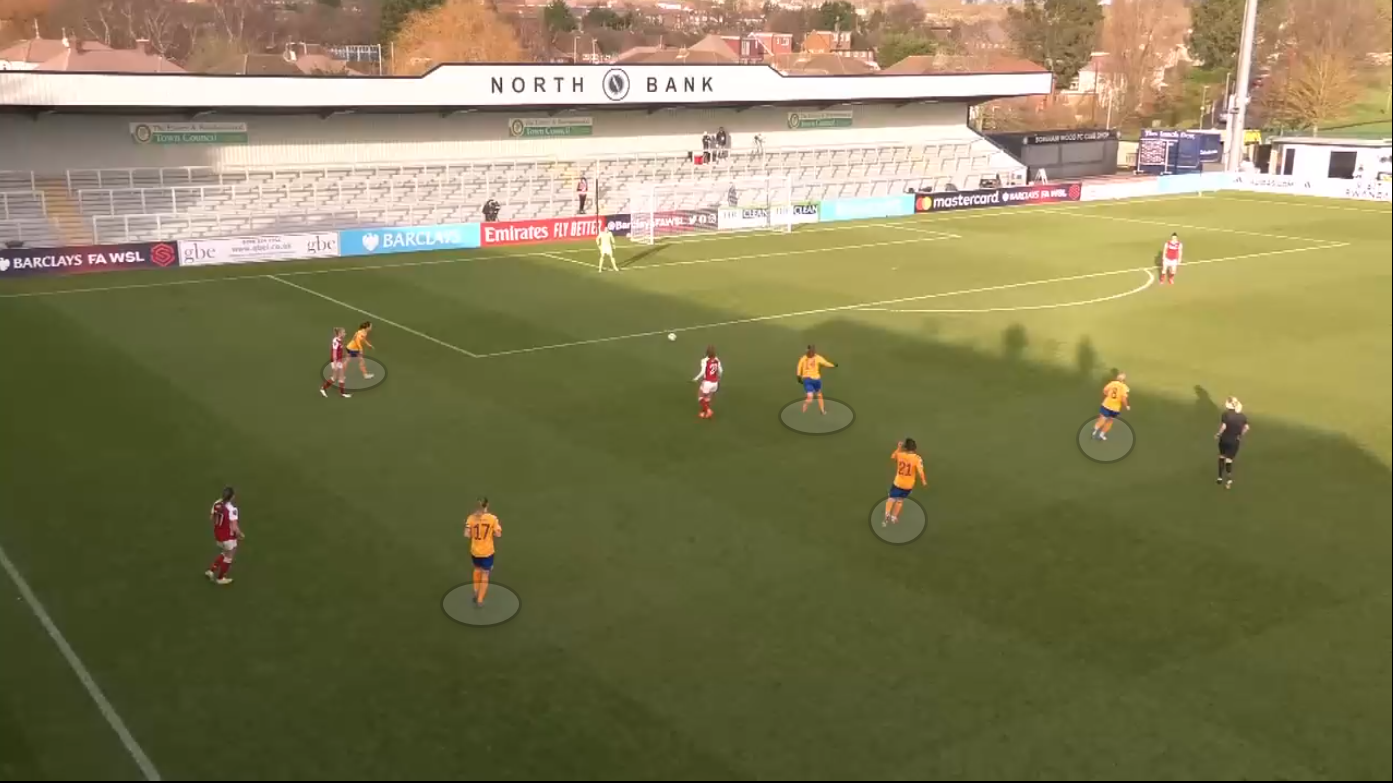 As you can see in this example, Everton are committing more players higher up the pitch and forcing Arsenal into either a long ball down the middle or playing out from the back where they want to try and dispossess them. In doing so, Everton managed to create a few counter-attacking opportunities but also disrupted Arsenal’s preferred style of play. 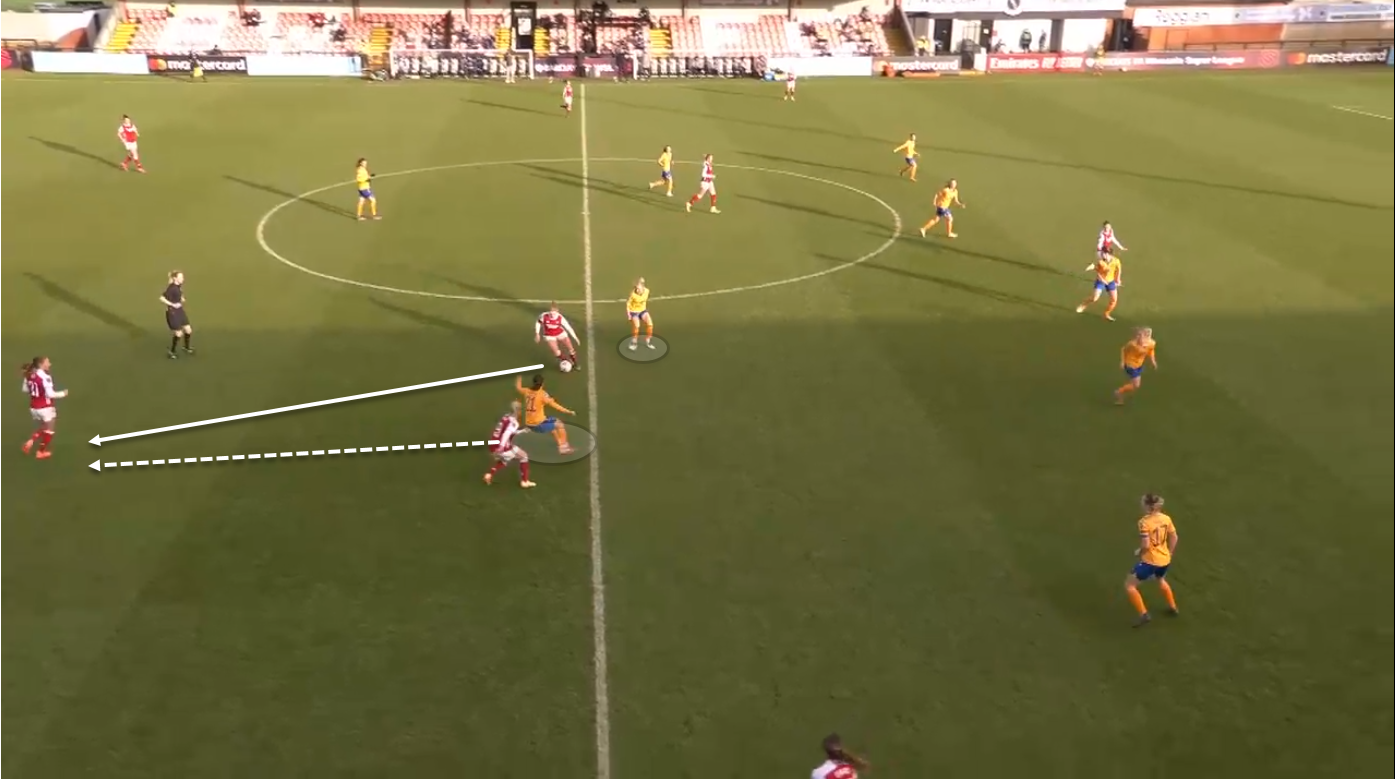 In the next phase of play, Arsenal find themselves in midfield but Kim Little has no real forward passing options and opts to play it back again. This was both down to Everton’s press and compact backline. Everton were much more defensively disciplined in the second half, despite conceding two more goals, and Arsenal were forced into being more creative.

Willie Kirk reacted to Arsenal’s preference to use the wide areas by ensuring his full-backs were more cautious of the spaces around them as well having a midfielder come across to cover. While the first half showed numerous examples of space being left in behind as we saw in the earlier section, the second half had these gaps plugged. As the image below shows, Everton’s full-back is in position, with two midfielders coming across to cover and track the runs of the two Arsenal players. One is looking to block the passing lane whilst the other wants to mark the free Roord and stop her from making a run into the open gap. 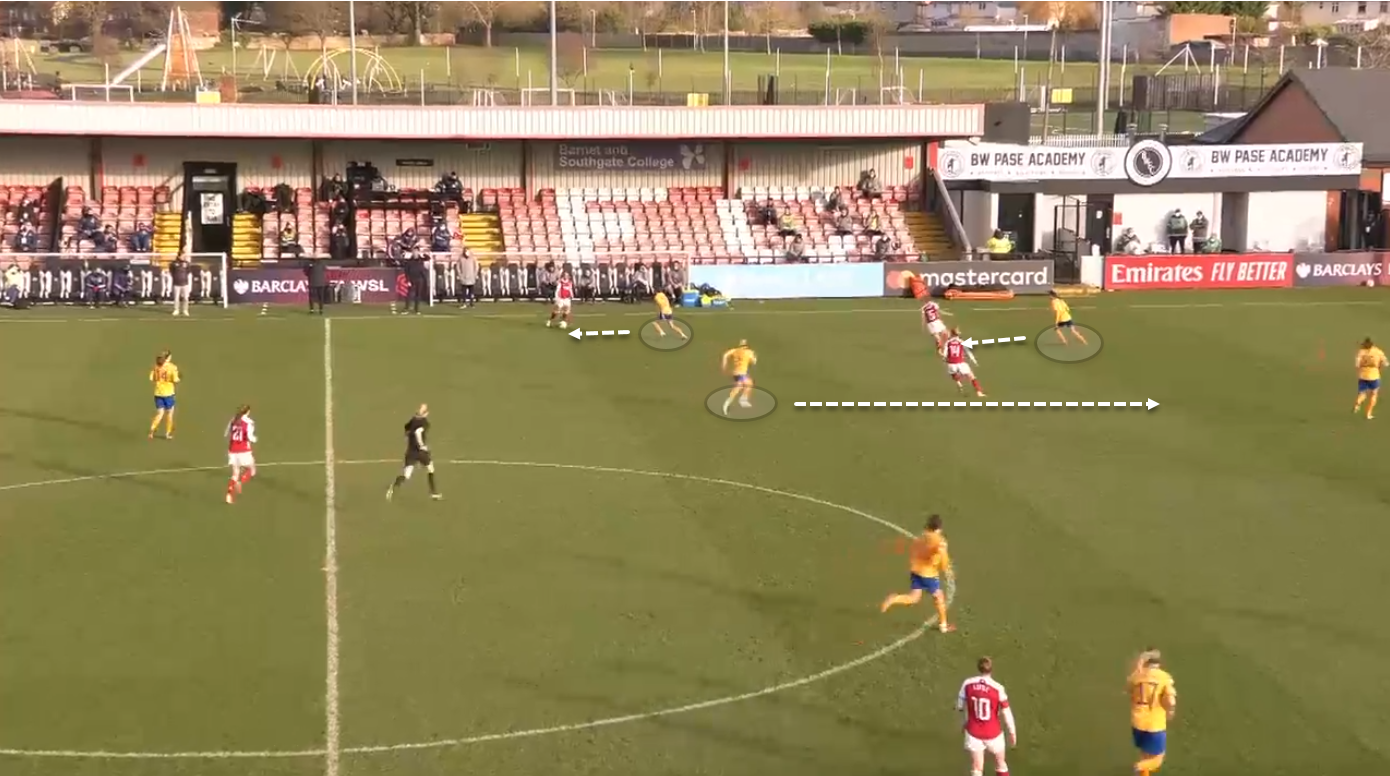 Everton’s attacking tactics were mostly based around a counter-attacking game which has been their go-to against the top sides this season. Though they used a slightly different formation in other matches, the premise of soaking up pressure and counter-attacking is their primary style of play. In this game, Everton found it difficult to find spaces to attack Arsenal which mainly came from the fact that Everton was not able to control possession in midfield. Even if their intention was to not keep as much of the ball they needed to keep the ball efficiently.

Part of the issue also came down slow movement of possession which played into Arsenal’s ability to press Everton and win back possession. Everton also tried to play it out through the full-backs but were more often than met with the opposing full-back and lost out. As a result, Arsenal won back possession also on misplaced passes which came from this press. 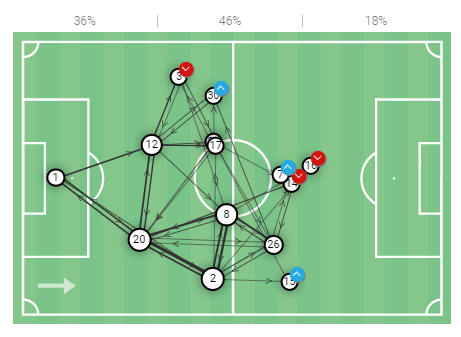 This pass map shows how Everton were shaped during the 90 minutes and how they favoured the wide areas particularly the right side. Ingrid Moe Wold was seen marauding down the right side for Everton which also explains why Arsenal wanted to target this area of the pitch. 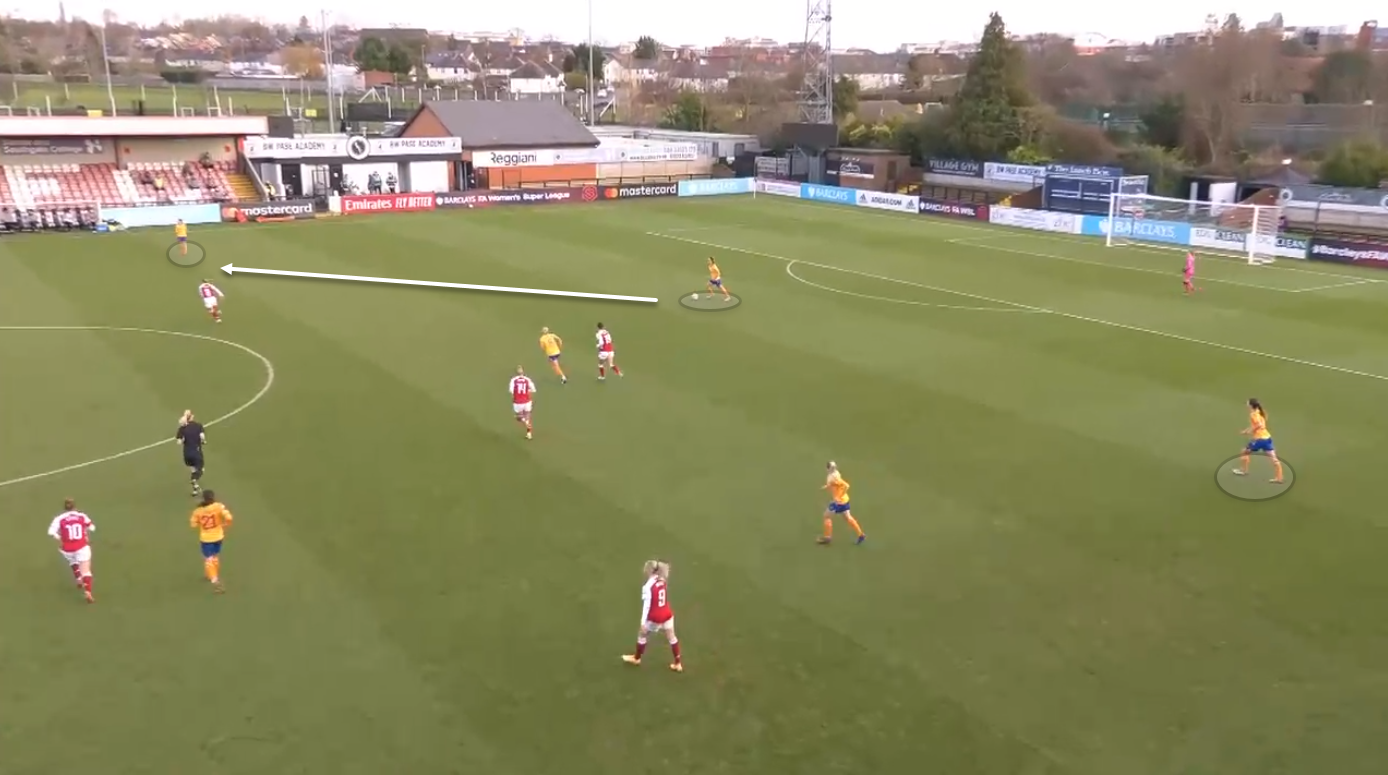 However, quick passes and movement in the second half meant Everton were much more efficient on the ball and outran Arsenal’s press. As the image below illustrates, you can see how Everton also utilised a three-man build-up and looked to go wide. 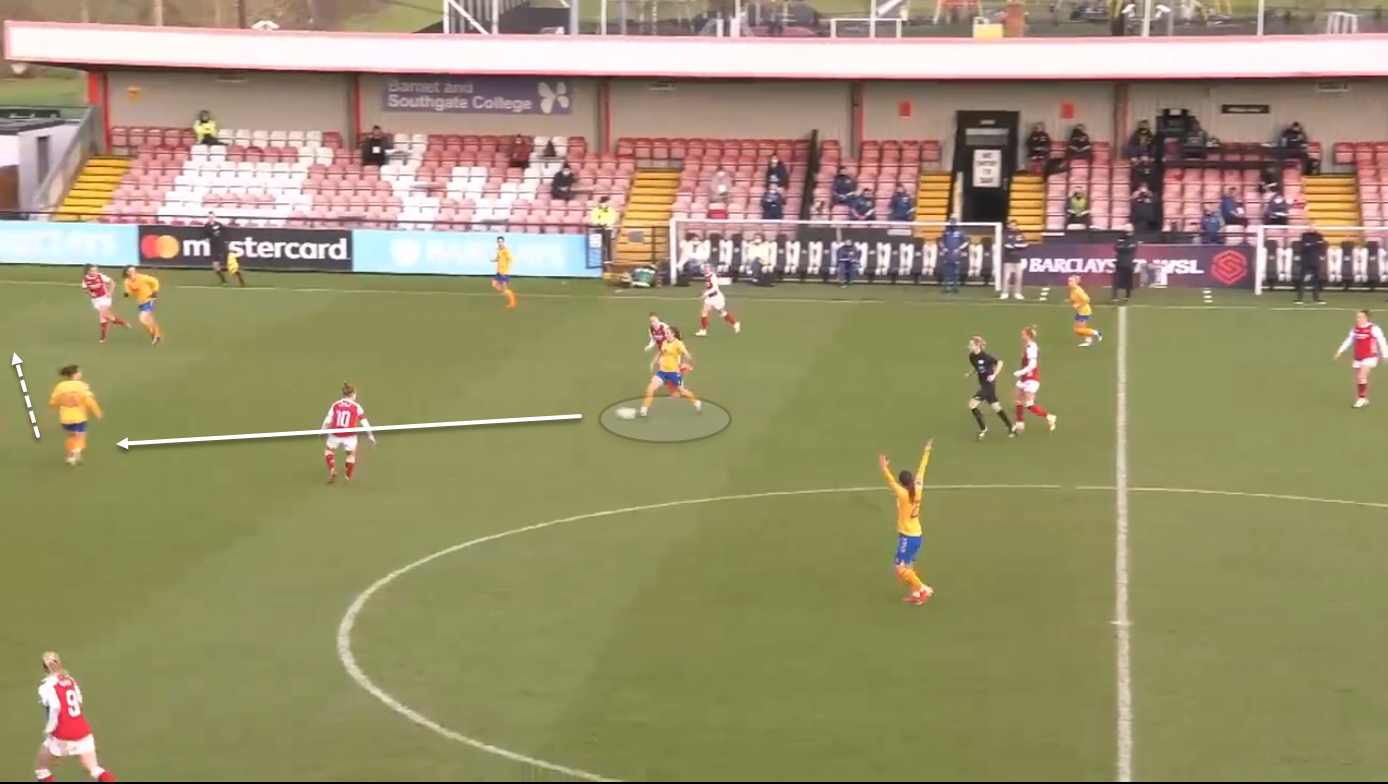 The ball eventually makes its way into midfield where the ball’s movement is much quicker and faster and though there’s an Arsenal player in touching distance, the ball carrier has enough time to make a forward pass. 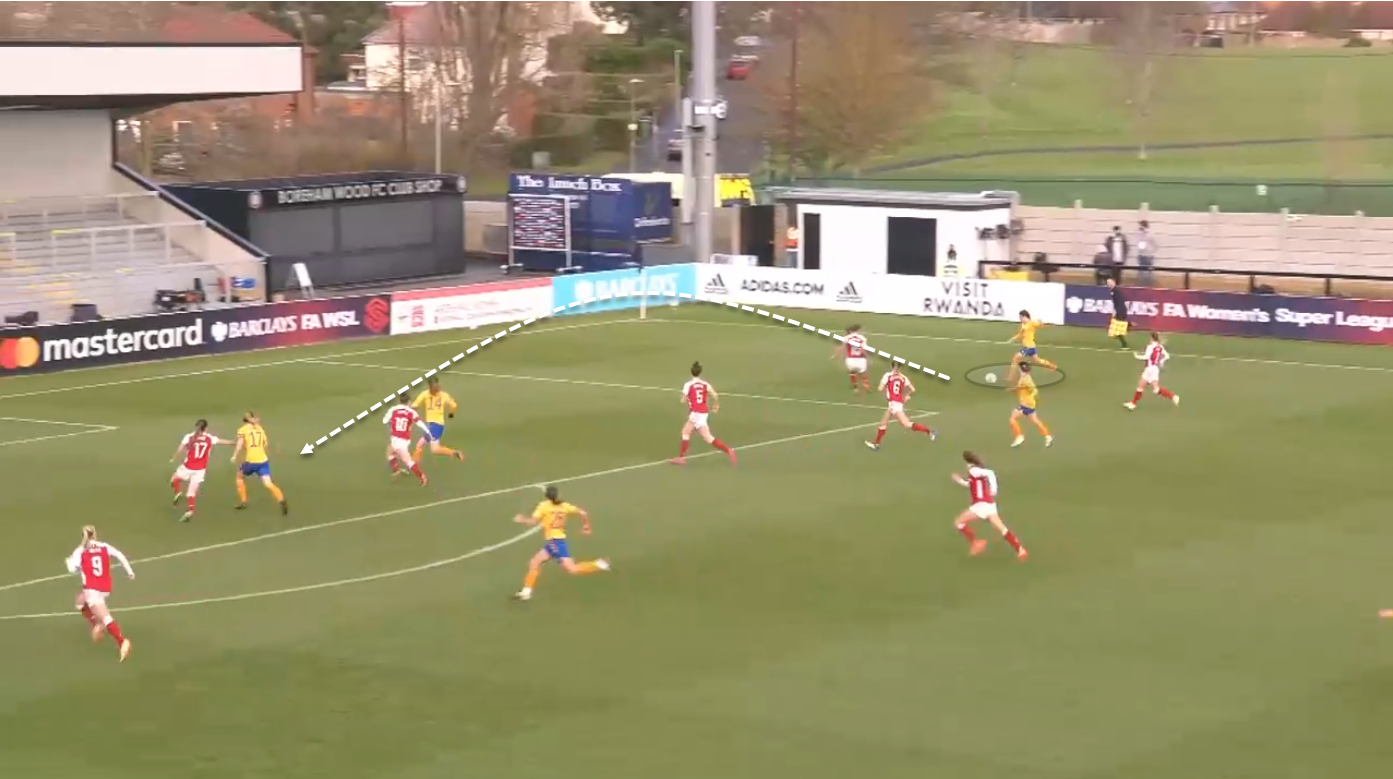 Everton eventually find Wold on the right who is in space to make a cross for the two Everton strikers. This sequence of play highlights Everton’s game plan and how it did work in parts but their inefficiencies of the first half cost them the game. From a defensive standpoint, whilst Arsenal kept a clean sheet it wasn’t without its problems. A lot of their defensive lapses came from poor ball management when playing out from the back and the quickness of Everton’s pressing caused Williamson and Gut to lose possession in key areas. 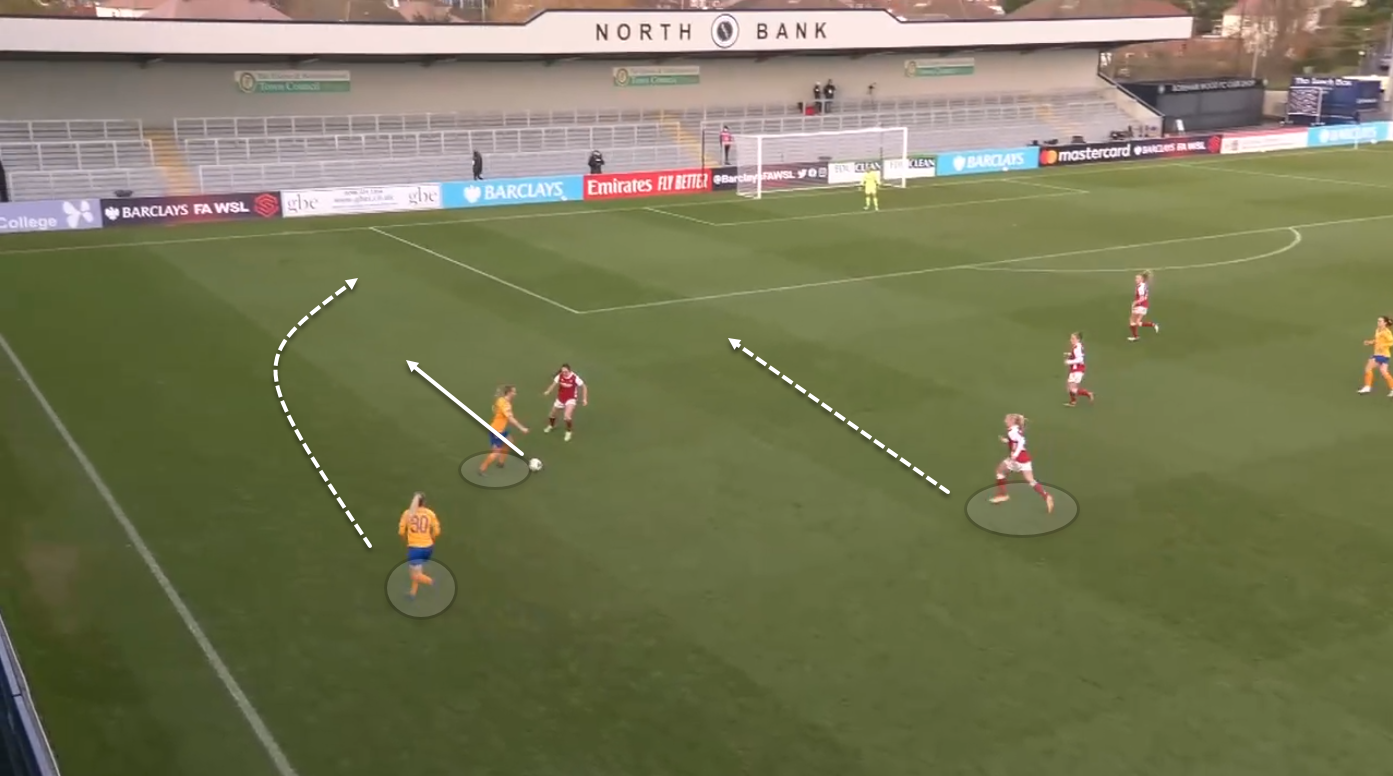 The improved tempo meant Arsenal’s players were not in a position to get back into position as is seen above. The ball is moved from midfield to Everton’s left side which puts the Everton player in a 1v1 position against Evans with Poppy Pattinson on the overlap creating an overload. In this case, you can see Mead still trying to recover and move in to help her full-back.

Overall, this analysis has shown us how Montemurro and his side ran riot and scored four goals. They are still in touching distance of the top and will be serious contenders towards the end of the season. Everton’s rise this season has been remarkable but will need to be more consistent as the season wears on if they are to challenge Manchester United Women for fourth place. The Blues are seriously missing Valerie Gauvin who provided a focal point and will be a welcome addition on her return in 2021.