The FAWSL returned after yet another international break which saw the players get some more minutes under their belts. The return to action saw Chelsea Women take on managerless West Ham Women. The Blues were in ruthless form yet again and dispatched three goals against a West Ham side that had some promise but ultimately fell. Under interim charge with the departure of Matt Beard, West Ham produced a gutsy performance and one that bodes well for the rest of the season.

This tactical analysis will look into the details of Chelsea’s win over West Ham and the tactics involved in scoring three goals. 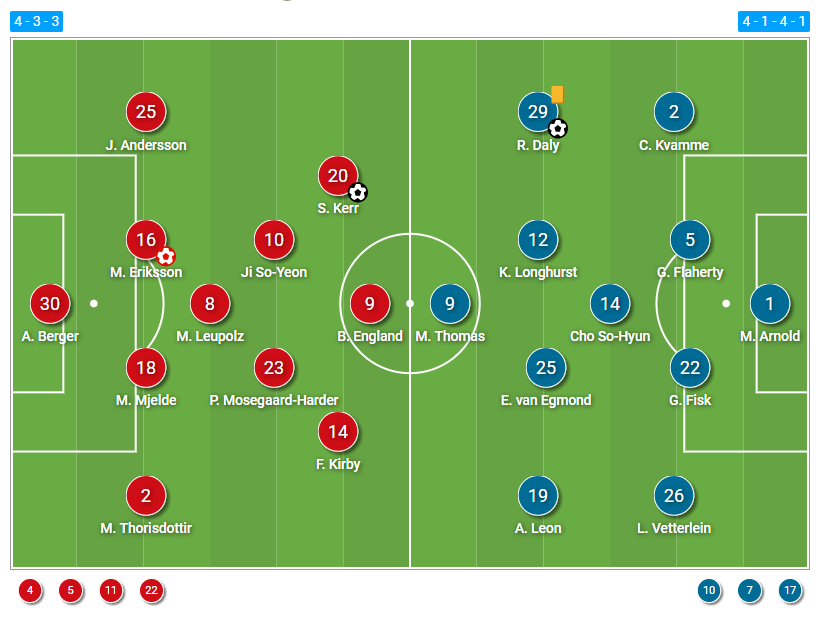 Emma Hayes surprised a few people by starting all of her attacking firepower in the same lineup. Sam Kerr, Pernille Harder, Fran Kirby, and Bethany England all started with Kirby coming back from injury. Maria Thorisdottir started a rare game in place of Mille Bright whilst the rest of the team remained the same.

West Ham made a couple of changes with Kateřina Svitková and Alisha Lehmann were dropped and replaced by Cecilie Redisch and Kate Longhurst.

Chelsea once again started in their fluid 4-2-3-1 system that is predicated on a free-flowing style where the attacking players are encouraged to swap positions to break down opposing defences. Just as Everton Women did against the Blues a few weeks ago, West Ham held a good defensive shape to try and nullify the spaces both between the lines and central areas. Chelsea’s wide players are naturally inclined to cut inside which makes for a crowded central area. First, let’s understand Chelsea’s build-up tactics which can be seen in the graphic below.

Chelsea’s build-up play was through the central areas with Melanie Leupolz dropping in between the centre-backs to pick up possession when there was no immediate pressure from West Ham’s forwards. Ji so-Yun would be stationed a little bit higher and offer a central passing option. 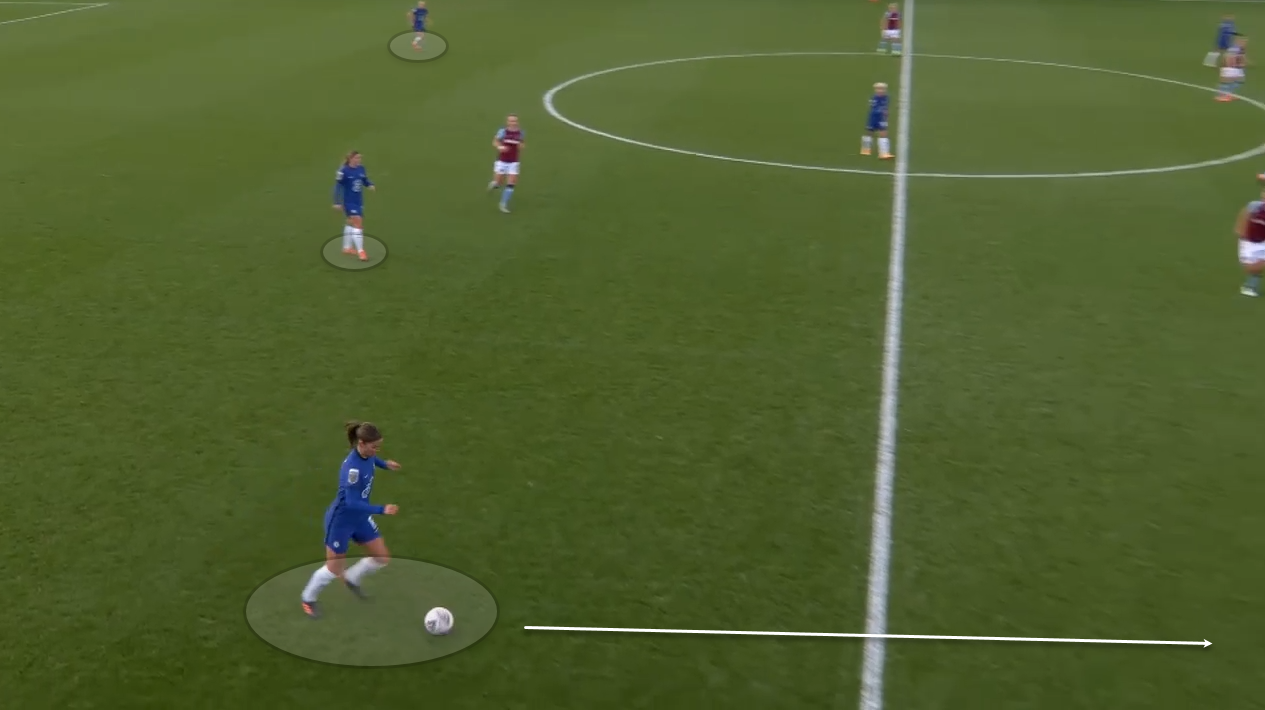 As the image shows, Leupolz moves across to the right side which prompts Thorisdottir to push as the German becomes a temporary right-back. This movement across ensures that Chelsea maintain a numerical advantage in key areas of the pitch where they want to attack. Having two-three players at the back along with multiple attackers gives Chelsea an outlet which forces the opposing team to commit resources and opens up spaces elsewhere.

Naturally, this meant key for Chelsea was the wide areas which has been their method of attack this season. Through several different analysis reports, we’ve seen how Chelsea use their full-backs to create width and open up crossing opportunities. This coincides with the overload of forwards in the central areas. In this case, Thorisdottir provided the width while Kirby made more inward movements. 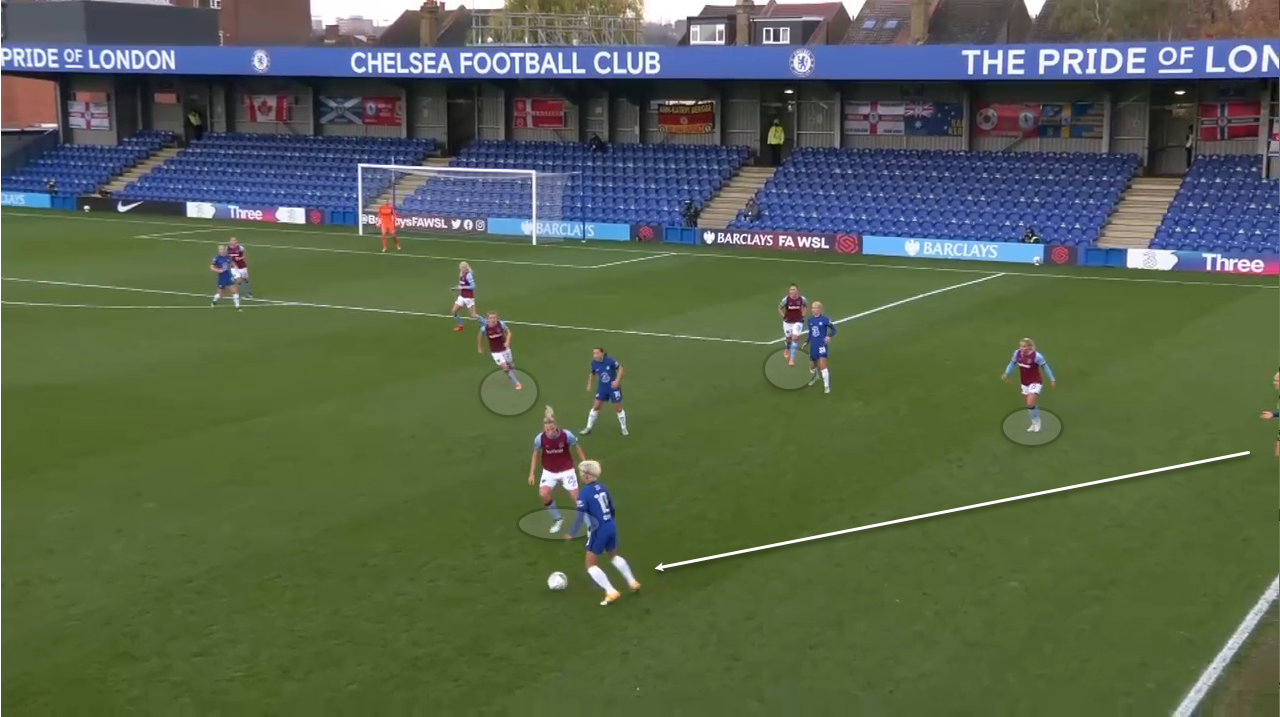 You can see Thorisdottir playing an inward pass to Ji with Kirby also in a narrower position. West Ham committed three to four players to block this attack which means there is more space to attack through the middle. Chelsea needed to shift the ball across quickly if they wanted to exploit these movements. There were times when the right-back played as an auxiliary right-winger giving Chelsea a 2-3-5 shape in attack. 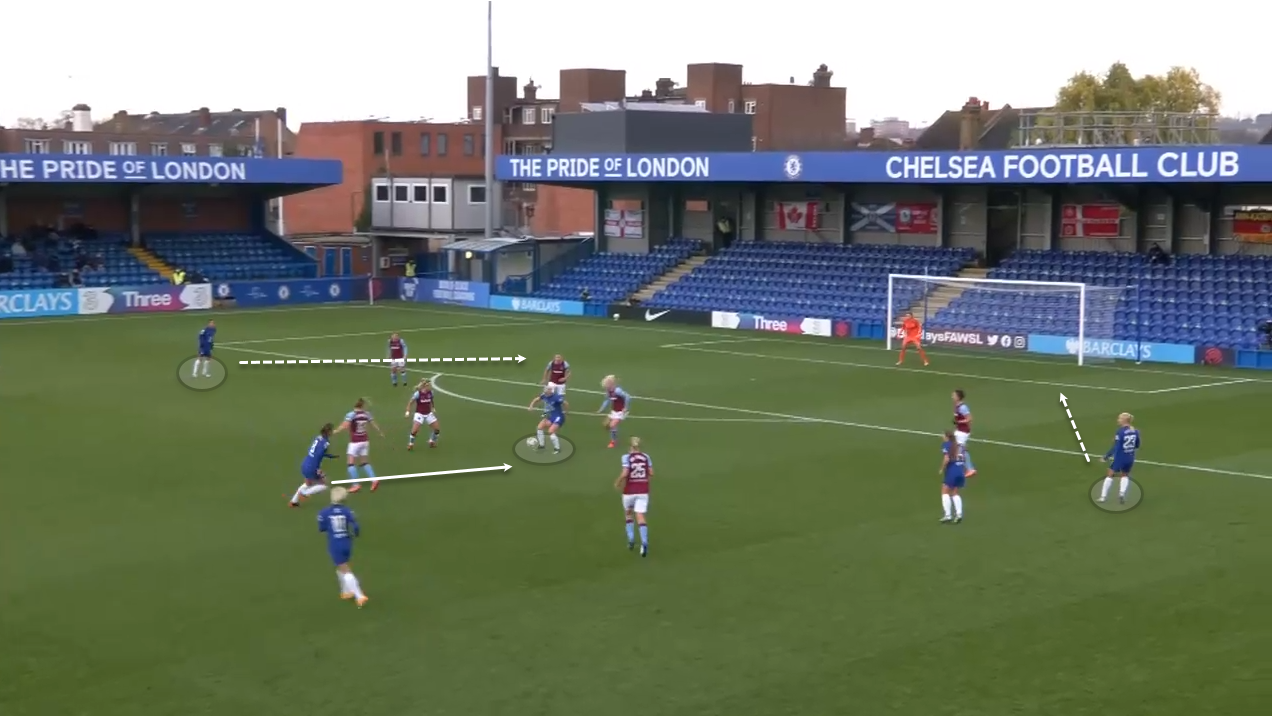 Here, Chelsea play the ball through the middle into England but even though West Ham have enough players surrounding the Chelsea striker, both Harder and Kerr are in favourable 1v1 positions to cross and run onto the aforementioned cross. England plays the ball out to Harder who then whips in a cross for Kerr at the back post. Though this one was cut out, Chelsea repeatedly sought to penetrate through the wide areas with crosses that eventually led to both their goals.

Although, West Ham made things difficult for Chelsea with their resolute defending and overloading tactics. Having two or three players committed to stopping the wide or inside channel cross was a priority. That along with Thorisdottir’s rustiness meant Chelsea weren’t able to attack as efficiently as they usually do.

West Ham opted for a 4-5-1 low block when it came to their defensive shape and pressing tactics. They kept shorter lines between their midfield and defence to try and counter-act Chelsea’s volatile final third movement. 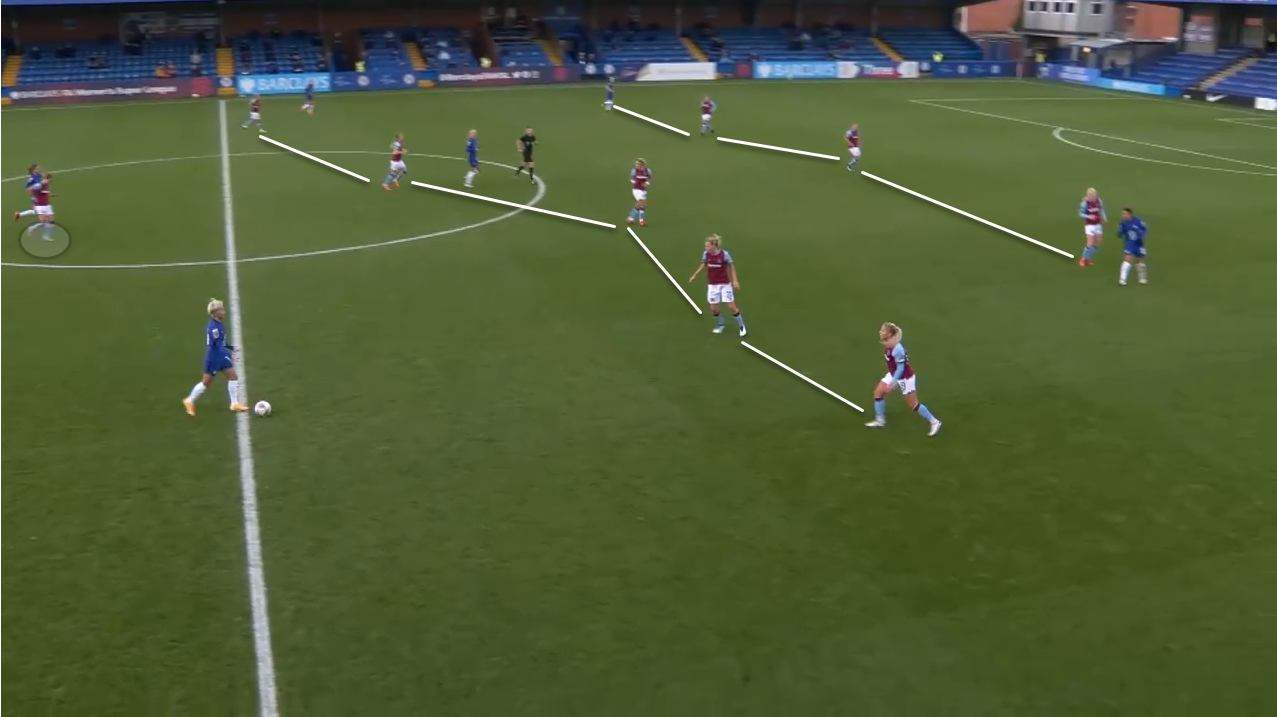 A similar incident is illustrated above where West Ham’s compact shape meant Chelsea would need to play the ball quicker and go wide. West Ham opted to overload the defensive wide areas with their full-back winger and one midfielder who would come across and stop Thorisdottir, Kirby, and Harder from crossing.

Here, West Ham have their two defenders, Adrianna Leon, and Cho So-hyun come across to stop Chelsea from creating passing combinations and good crossing angles. Because most of the play came down West Ham’s left, the two aforementioned attacking players were largely effective in a defensive capacity. 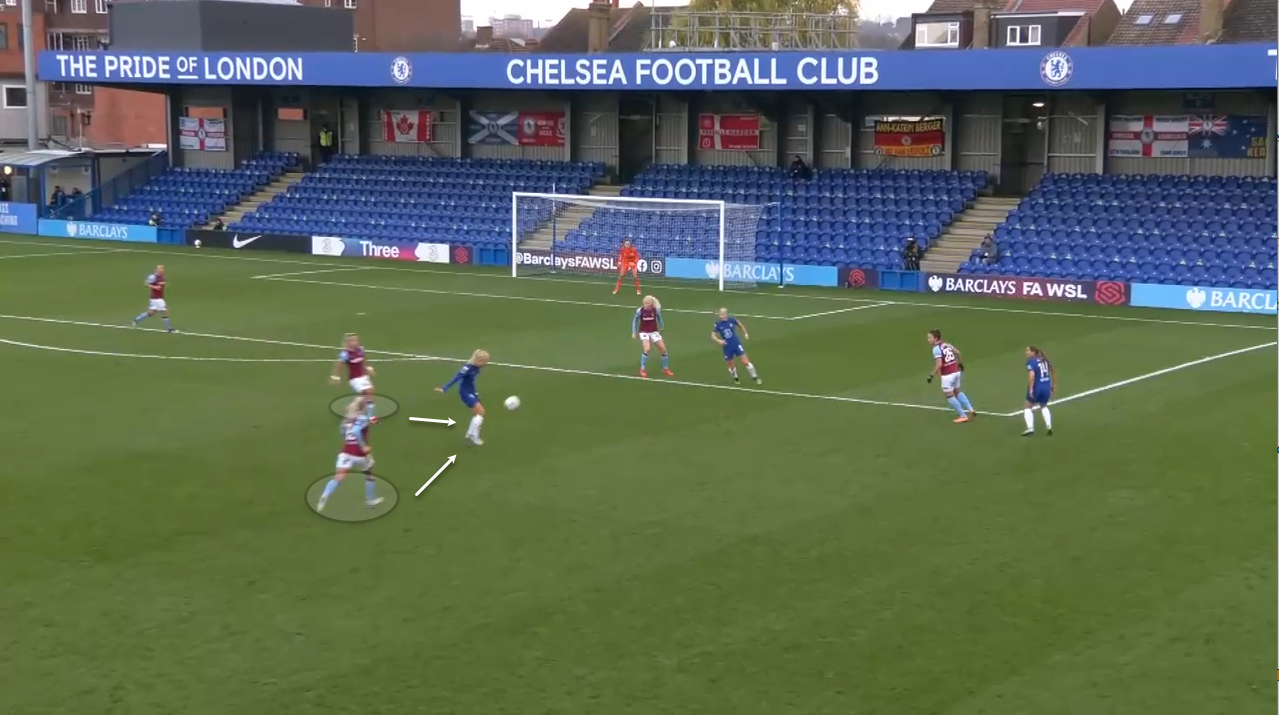 West Ham’s 4-1-4-1 system was not only used to keep the central areas tight but also used as a good counter-attacking method. The Hammers targeted Chelsea’s wide areas behind the full-backs given their tendencies to push up high especially on the right-hand side. This flank was where the majority of action happened for both sides and really tested Thorisdottir in a defensive capacity.

It was interesting to see them adopt a method of building out from the back using their goalkeeper as an outfield player which worked because Chelsea did not press West Ham as intensely as they usually would. When Chelsea’s attackers did engage in a press it caused Mackenzie Arnold to make a mistake. This build-up method was used to find short or long passing options depending on the options available. If Chelsea pushed up high, West Ham would opt for a long pass down the flanks, though if they stayed off, then Arnold would find one of the centre-backs and build out from there. 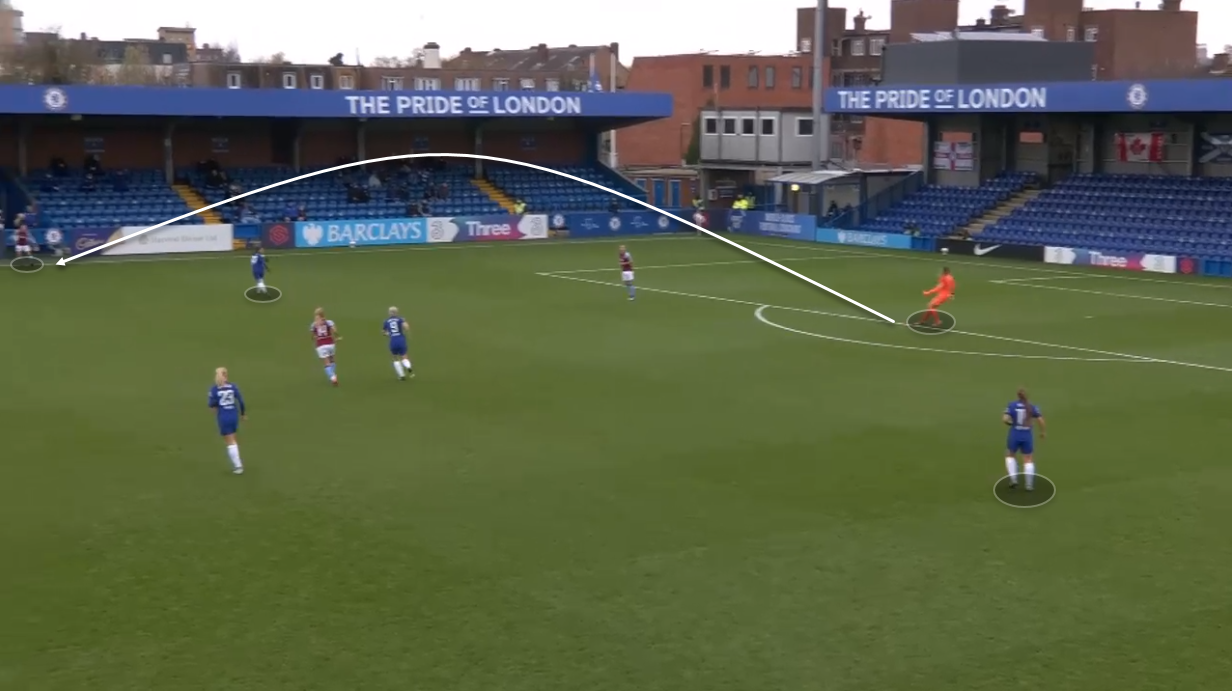 Because Chelsea’s wide players are more inside-forwards or strikers, it means they are naturally inclined to sit in a narrower position. This combined with the forwards not pressing as aggressively meant West Ham were able to pass between each other drawing in the Chelsea attackers. An example of this can be seen above where Kerr and Kirby are both in much narrower positions which prompts Arnold to play a pass down to West Ham’s very wide full-backs. From here, West Ham would look to play quick passes down the line to try and isolate Chelsea’s attack and defence.

This method of build-up then gave way to West Ham’s preference to attack the flanks. Rachel Daly and Leon were used as the two wide players giving West Ham a balance in attack. Though Daly is often deployed as a central striker, she was used in this wide position to bring her link-up abilities and positioning sense to take advantage of any spaces available in behind. This was evident in the way she scored the first goal. 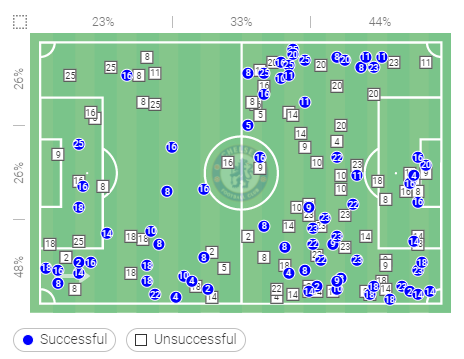 Taking a closer look at the above duels engagement map, you can see where Chelsea were battling for possession from West Ham. As you can see the wide areas had the highest percentage of duels whilst 44% occurred in Chelsea’s defensive third. This suggests that West Ham had a lot more of an attacking threat than they previously posed. Though their expected goals was 0.92, they managed to score two goals both coming from the flanks. 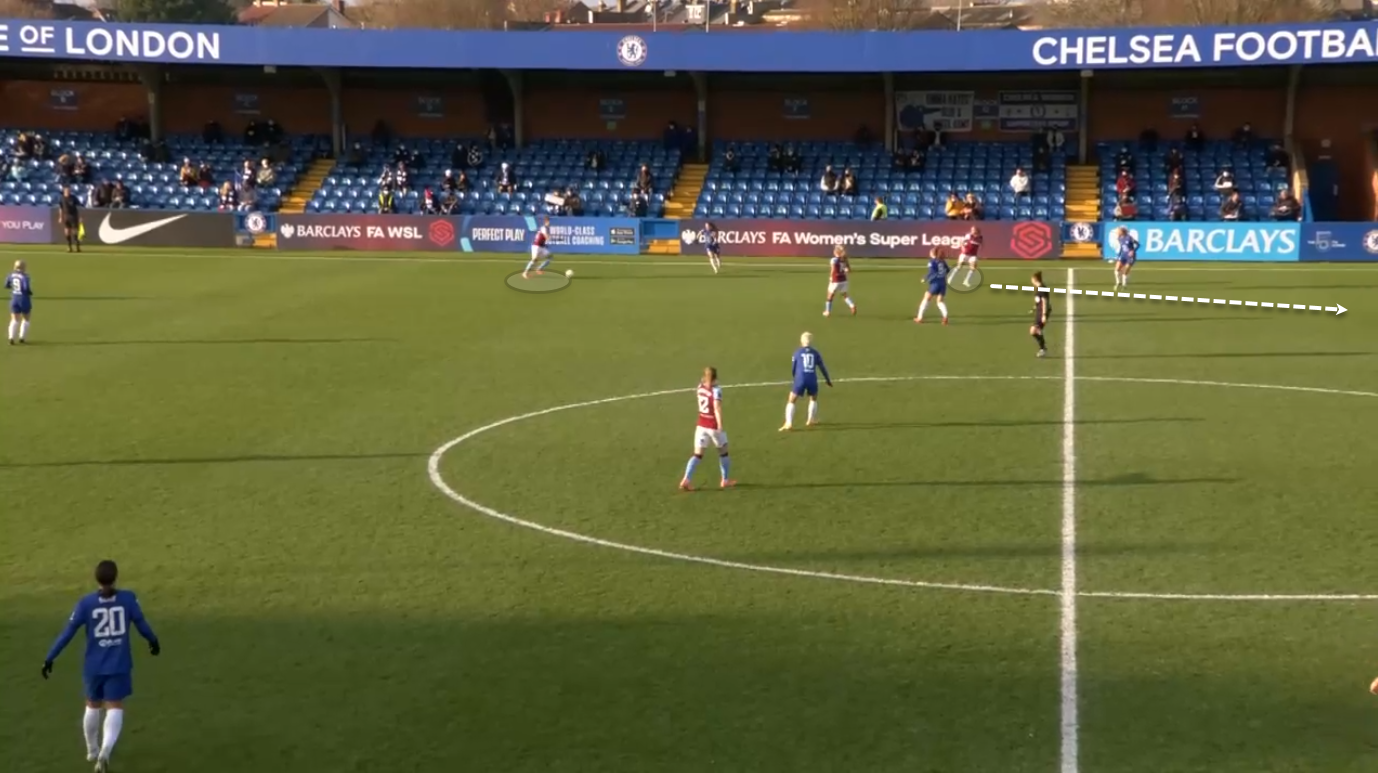 This is the passage of play in the build-up to West Ham’s first goal and clearly shows how they used the wide areas effectively. Here you can see Laura Vetterlein in possession with Leon dropping deep to offer a passing option. The ball is played into Emily Van Egmond who lays off a pass for the left-winger to run onto. This third-man movement was used to great effect because it took advantage of Thorisdottir’s high positioning. 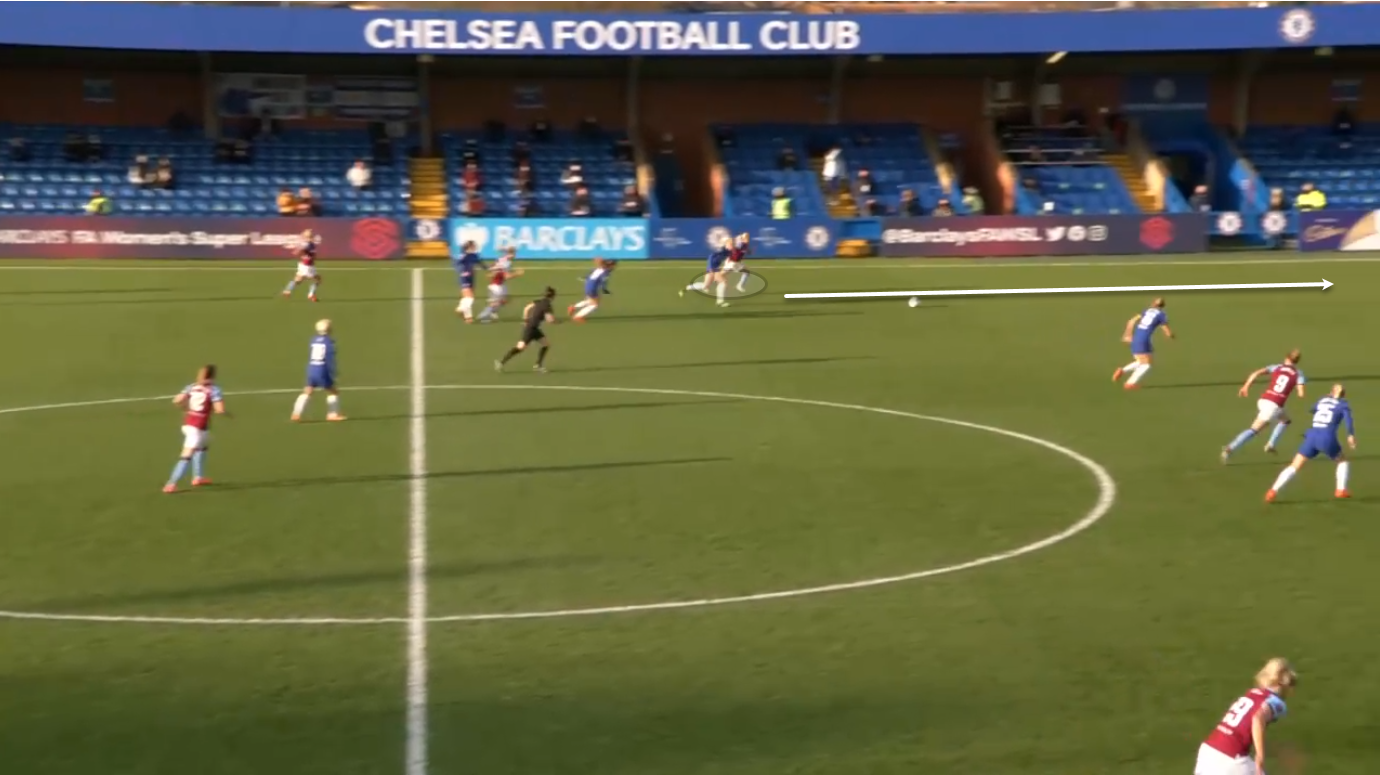 The amount of space available for West Ham to attack is noticeable here and allowed Martha Thomas and Daly to attack in the box. Chelsea’s defence was tested given they lacked Mjelde’s defensive assuredness and positioning at right-back and combined with Thorisdottir’s rustiness meant they weren’t as defensively solid.

Overall, this was one of West Ham’s better performances of the season and though they lost 3-2, there was a methodical approach to their game under goalkeeping coach Billy Stewart and first-team coach Paul McHugh. Chelsea have not had the most fluent of starts to the season and though they’ve picked up points this season, they still have another level to reach. It says something about a side that can pick up three points yet not be at their optimal best.