The 2020/21 season has started with a bang across the first two gameweeks with Manchester City and Arsenal showing their firepower early on. While Chelsea won the Community Shield, they stuttered against Manchester United in gameweek 1, however, a team that hasn’t struggled rather looks very comfortable are Arsenal. Their game against West Ham Women on Saturday confirmed their intentions for the season and will give both Manchester City and Chelsea a run for the title. The Gunners demolished West Ham 9-1 in what was a relatively simple victory for the London Club.

This tactical analysis will discuss the tactics used by Joe Montemurro’s side which opened up West Ham and led them to this dominant win.

Montemurro may not have the stellar, big-name signings of Chelsea or both Manchester clubs, however, his signings have been quite astute and shrewd. He made no changes from the side that beat Reading 6-1 but changed from a 3-4-2-1 to a narrow 4-2-3-1. Two of their new signings were given starts again in Noelle Maritz and Steph Catley who impressed with their outing last week. Vivianne Miedema led the line whilst Kim Little and hattrick hero Jill Roord marshalled in midfield.

Matt Beard opted for one change which was to bring in new loan signing Rachel Daly to lead the line in place of Leanne Kiernan. The Houston Dash striker comes to West Ham after a successful NWSL Challenge Cup which is seen as a massive coup for the London club. 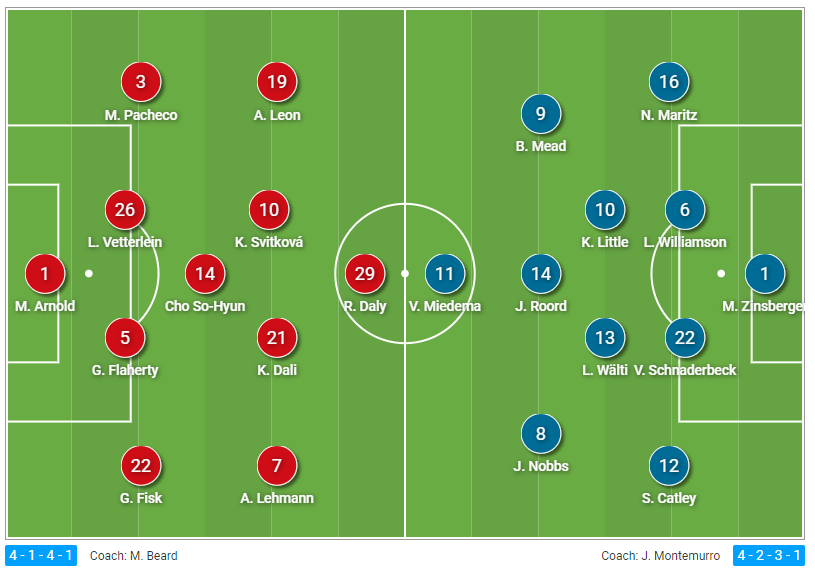 Arsenal were brimming with confidence coming into this game and after showcasing their exhilarating skills last week, they would have been keen to continue their rich vein of form. The new system has enabled Arsenal to achieve an attacking and defensive balance allowing for solidarity at the back and numbers in attack.

The change in formation has given Arsenal’s midfielders more freedom to play their natural attacking game and combat West Ham’s compact midfield five. Though West Ham started with a 4-3-3, the two wide players, Alisha Lehmann and Adriana Leon would drop back and create a solid line of five. Jordan Nobbs and Beth Mead started out wide but were asked to stay narrow to try and take advantage of the half-spaces by playing through balls in this space. The full-backs were tasked with providing width on the overlap. What Montemurro did so well was to be able to get his playmakers and box to box midfielders playing in harmony together through the middle considering Nobbs started at left-wing.

The double-pivot has enabled Nobbs to come inside to her more natural position pushing Catley (replaced early on by Katie McCabe due to injury) and Noëlle Maritz to provide the width. Mead naturally plays wide and cuts inside so the balance was there. Due to Arsenal’s possession heavy style, they were able to leave Lia Walti as the lone midfielder whilst Roord, Nobbs, and Little played box-to-box and advanced playmaker roles behind Miedema. The movement of Nobbs inside means only one player needs to pick up and progress possession whilst the other two push up in support of Miedema creating overloads in the box. 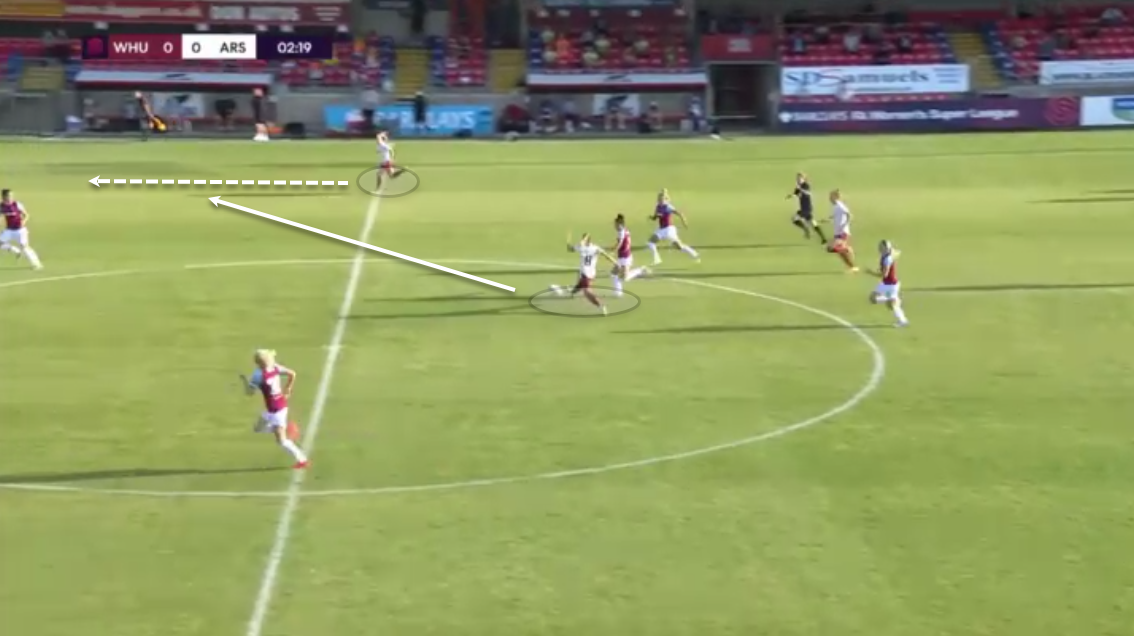 Arsenal found spaces between West Ham’s midfield and defence on a regular basis. The first 20 minutes saw West Ham play more positively but left gaps in behind when Arsenal regained possession and counter-attacked. The above image shows Roord pick up possession deep, pass it on to Nobbs (in possession) who lays off a quick pass to Mead. You can see the gaps West Ham have left in the wide areas with no real cover in midfield. 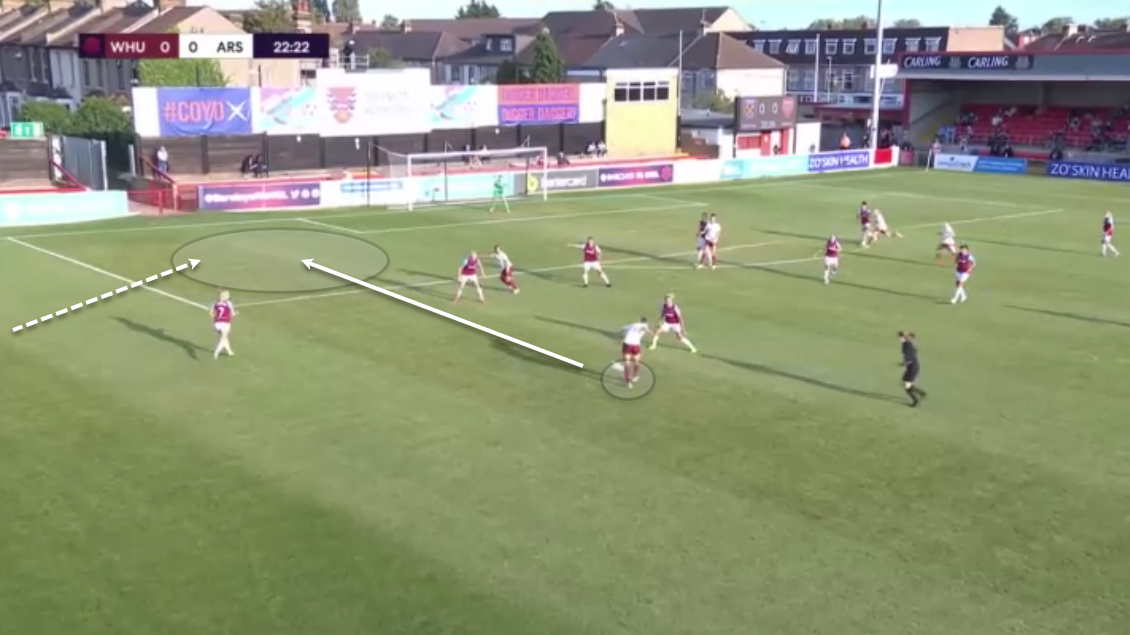 For Arsenal’s first goal, we can see Miedema in possession scanning her options. West Ham’s positioning between midfield and defence isn’t coordinated which leaves a wide gap between full-back and winger Lehmann. Miedema plays a through ball in the gap for the overlapping McCabe. 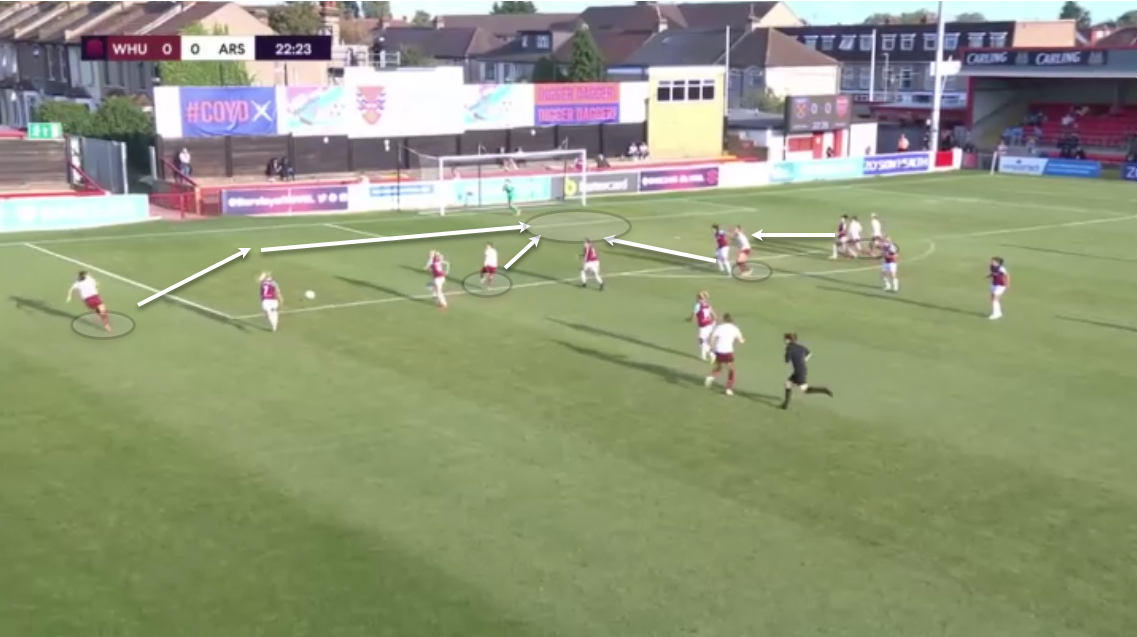 McCabe has enough time and space to get on the end of the pass and drive in a low cross for the onrushing Arsenal midfielders. Notice how narrow Arsenal’s four attacking players are with Nobbs and Mead on either side of Roord and Little. These constant rotations and movements from Arsenal’s attacking players and West Ham’s lack of defensive positioning led to their downfall.

Roord was partnered with defensive midfielder Walti in a double-pivot, with the two complementing each other by pulling the strings from deep whilst shielding the back four. Roord has been particularly impressive with her mix of direct running and passing range which has been a particular problem for teams because of her deep runs. Scorer of three more goals, Roord’s goals were well taken but not without the presence of Walti next to her who provided a defensive base to allow the playmakers and runners to push forward.

Coming into the game, West Ham were wary of Arsenal’s attacking potential having witnessed the 6-1 thrashing of Reading last week. Roord scored a hattrick, with Miedema continuing to get on the scoresheet, so West Ham would have been prepared to sit deep and counter-attack Arsenal. Although they started the game well, the forwards were engaged in a high press to try and stop Arsenal from building out from the back through their central defenders. Daly led the line who mainly operates as a false nine and fits in by dropping into pockets creating space as well as using her aggressive nature off the ball to press opposition defences. Her superior tactical intelligence has been a hallmark of the strikers play which could be seen in glimpses. West Ham committed 3-4 players when Arsenal tried to play out from the back as can be seen in the below image. 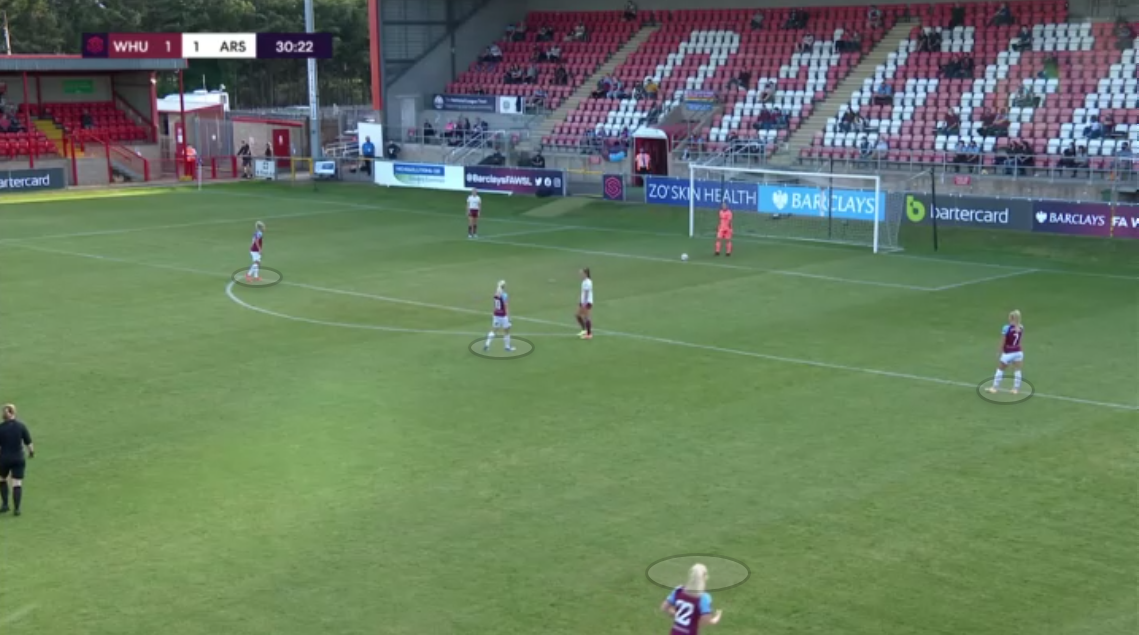 Here we can see West Ham looking to put pressure on both Arsenal centre-backs giving Manuela Zingsberger a choice to make. Either go direct or play it short and play through West Ham’s press. Arsenal’s response, for the most part, was to go long into midfield. The reason for this was because of West Ham’s high line out of possession and no real defensive cover when the long ball was played into Miedema or Little. Arsenal were able to win most first and second balls and while West Ham attempted to press Arsenal in midfield, it wasn’t very coordinated. 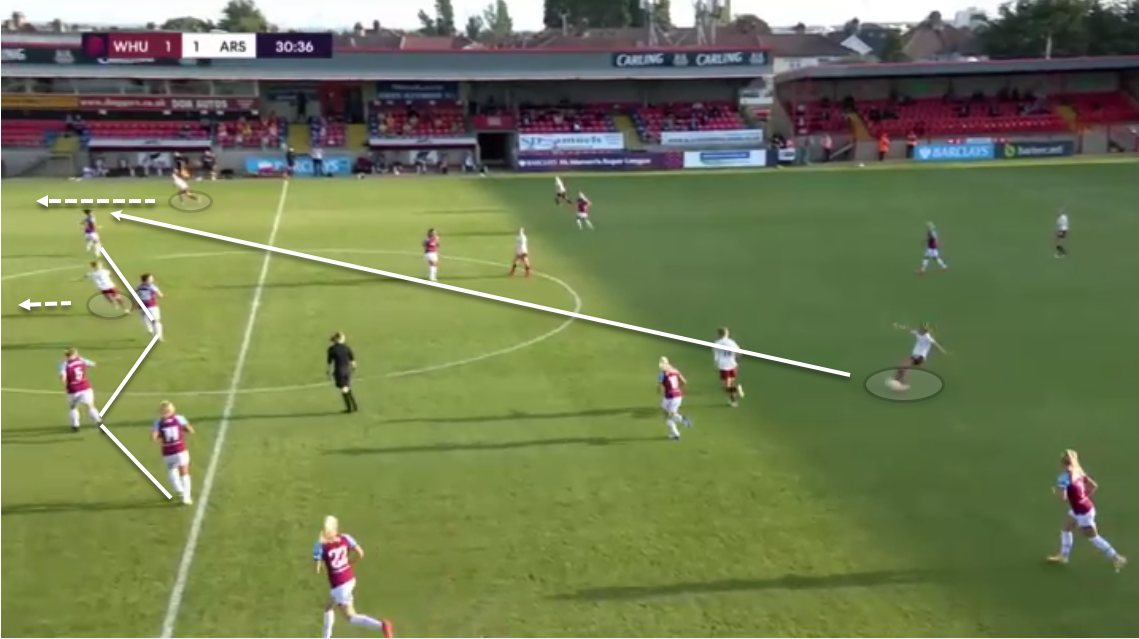 Once the ball was back in Arsenal’s possession after they played it out, there was enough time for the deeper midfielders to pick passes forward. Notice in the image about the disjointed West Ham backline and lack of pressure on the ball carrier. Two Arsenal players are able to run in behind the West Ham backline without any real pressure which shouldn’t be the case given their numerical advantage at the back. Once again there is space down Arsenal’s left for Mead to run onto and which is precisely where the pass is being directed.

Little’s goal and Arsenal’s third was another example of the West Ham midfield’s inability to track runners as Little’s run through the middle was left untracked. Arsenal’s fifth goal scored by Roord was identical in that West Ham put no pressure on the runner despite having three players in the box as can be seen in the below image. 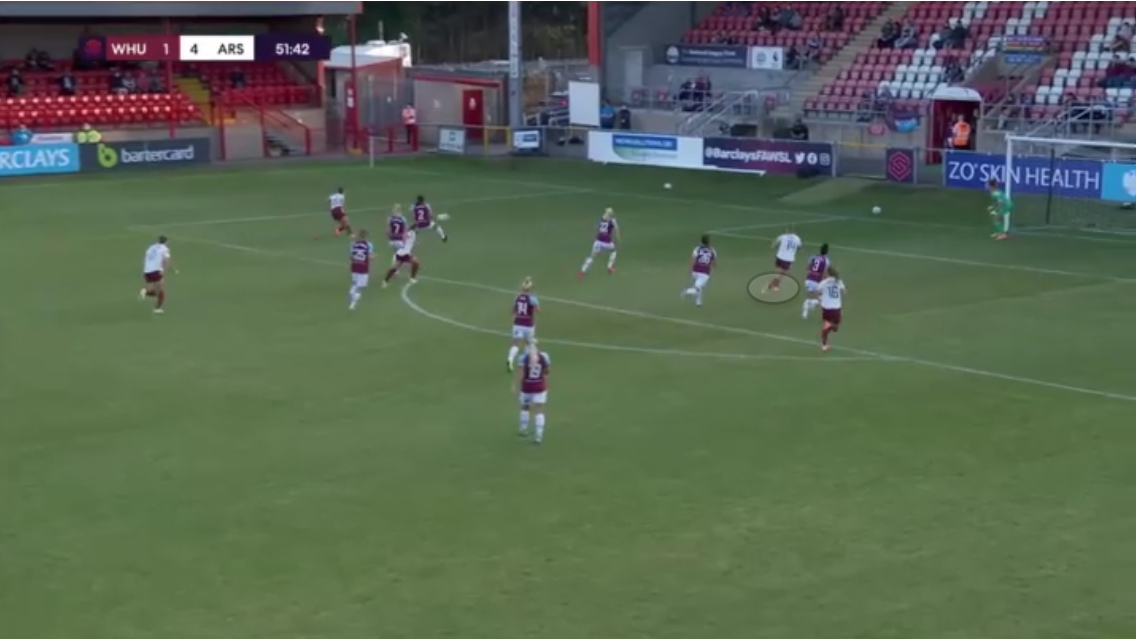 Roord makes a run from outside the box and awaits the cross from the left. Because Arsenal were looking to constantly create from the wide areas, West Ham moved their focus to the wide areas in the second half but being a player light made it a real difficult task. The dismissal of club captain Gini Flaherty didn’t help the cause and accelerated their demise given one of their best players was off the pitch.

If anything, the analysis has shown the quality of play in the FAWSL now. Arsenal really stamped their authority on the FAWSL with two thumping victories that takes their tally to 15 goals in two games. Given the stuttery start made by Manchester City in their 0-0 draw to Brighton & Hove Albion, the battle for the top spot will come down to the wire. Chelsea recovered from their 1-1 draw to Manchester United last week to a thrashing of Bristol City 9-0 on Sunday to match Arsenal’s scoreline. These three teams will take some doing to be stopped but one thing is certain is that Arsenal have proved their title credentials with the two standout wins.